Fixperts is an award-winning learning programme that challenges young people to use their imagination and skills to create ingenious solutions to everyday problems for a real person.

In the process, they develop a host of valuable transferable skills from idea generation, to prototyping and collaboration. Learners tell the story of their fix, often in the form of short films. An online archive of these films, open to all, demonstrates the power of the process. 450+ films have been viewed over 500,000 times.

Fixperts provides a framework, flexible teaching formats and a methodology, matched to schools' and universities' needs, from hour-long workshops to term-long projects. It's relevant to any creative design, engineering and/or STEM/STEAM studies. It had been taught at FE, undergraduate and post-graduate levels; in late 2017 Fixperts restructured and relaunched as an extended project which includes extensive teaching resources for schools.

Fixperts began in 2012 as a voluntary project conceived and led by Daniel Charny (Director of From Now On, Curator of Power of Making and Future of Fixing) and co-founded with James Carrigan (co-founder of Sugru). It continued as an open, informal, ad-hoc project for the next years, spreading virally to 20 countries via 35 universities.

In July 2017 Fixperts relaunched under a new structure: FixEd, a think and do tank devised to accelerate this process and encourage take up with younger learners. In September 2017 Fixperts launched its first offer for schools, making available full schools teaching resources, training programmes and workshops, accessed via a subscription service. Concurrently Fixperts was centrally featured in a STEM Technical Award, available nationally in English schools. Fixperts is continuing to extend this range of classroom resources, and is supporting schools with training courses and broader learning and activity packages.

Fixperts is timely in its combination of influences and Fixperts for Schools delivers these into classrooms in an accessible, DIY package, with the potential to scale way beyond facilitated formats. It draws on human-centred and co-design methods to work in real contexts with participants (Fix Partners) to deliver a shared experience that promotes empathy and delivers social benefit. It bridges design and engineering in it's approach to problem-solving. It exploits the growing global availability of digital tools, makerspaces and maker programmes in other type of organisations (such as libraries), but reframes them as tools for social change and prosocial design. It's a form of frugal innovation in which draws on DIY and hacker cultures to promote intelligent and imaginative adaptation and cannibalisation above market-driven and resource heavy ideas. It provides a platform for the network to tell its own authentic stories with potential to find new audiences via internet channels like Youtube, Instructables and Thingiverse.

Fixperts for Schools is anchored by the powerful belief that fixing is an accessible form of creative problem-solving, which can offer an introduction to, accelerate or motivate an improved design process, while enhancing the day-to-day lives of a wide range of people, including the Fixperts themselves. 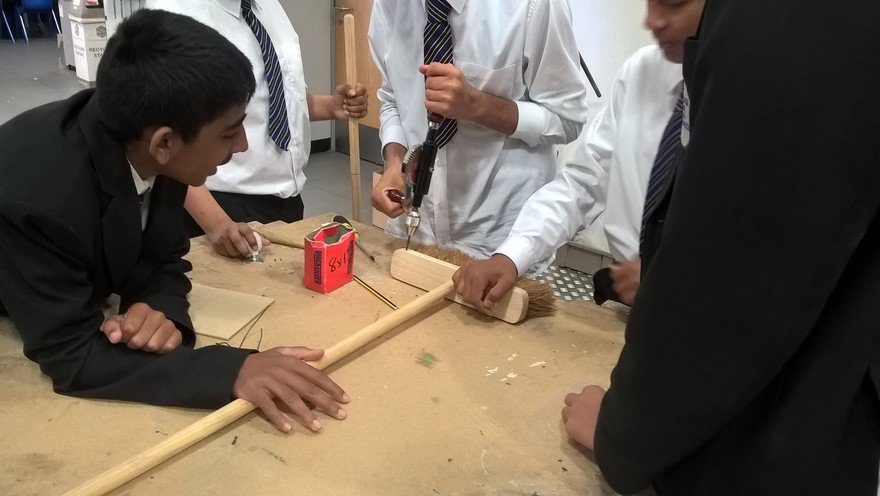 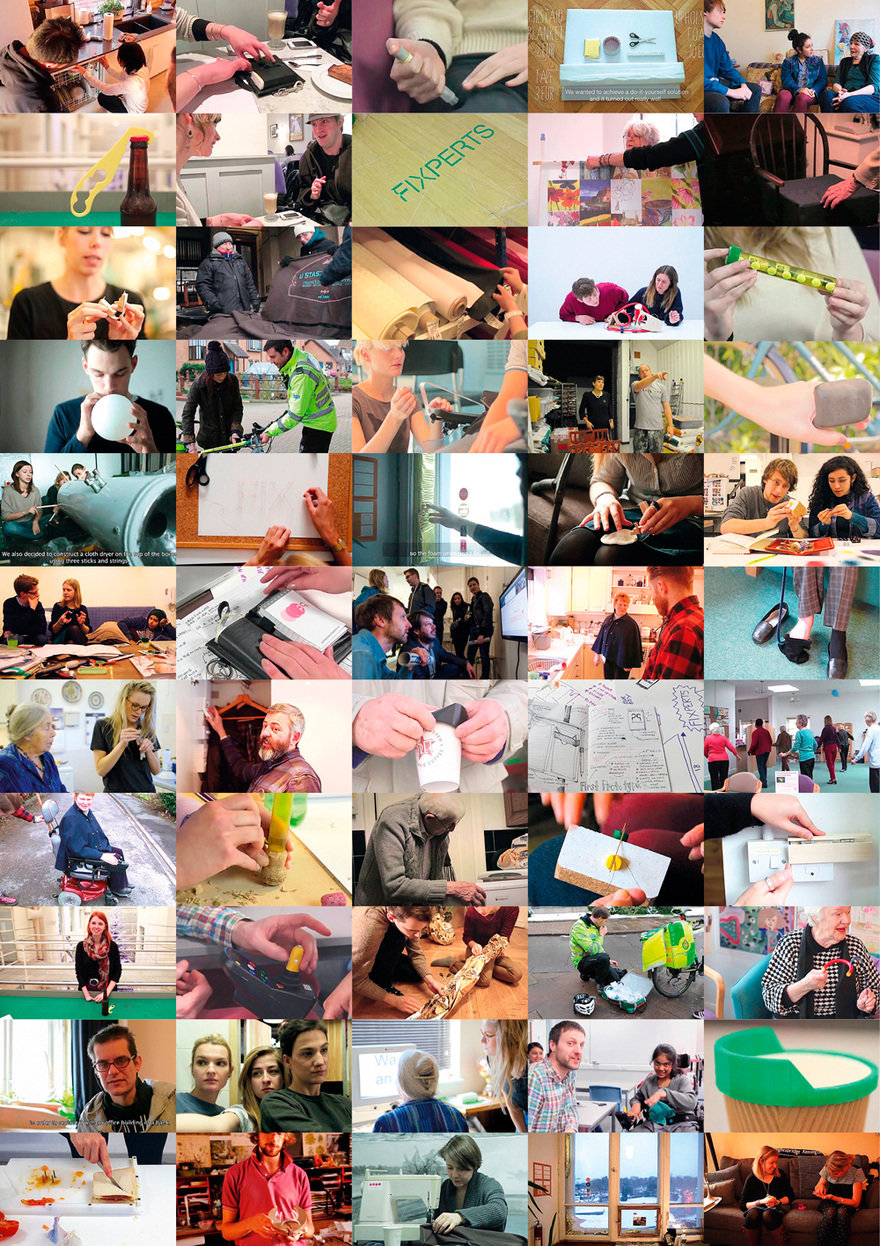 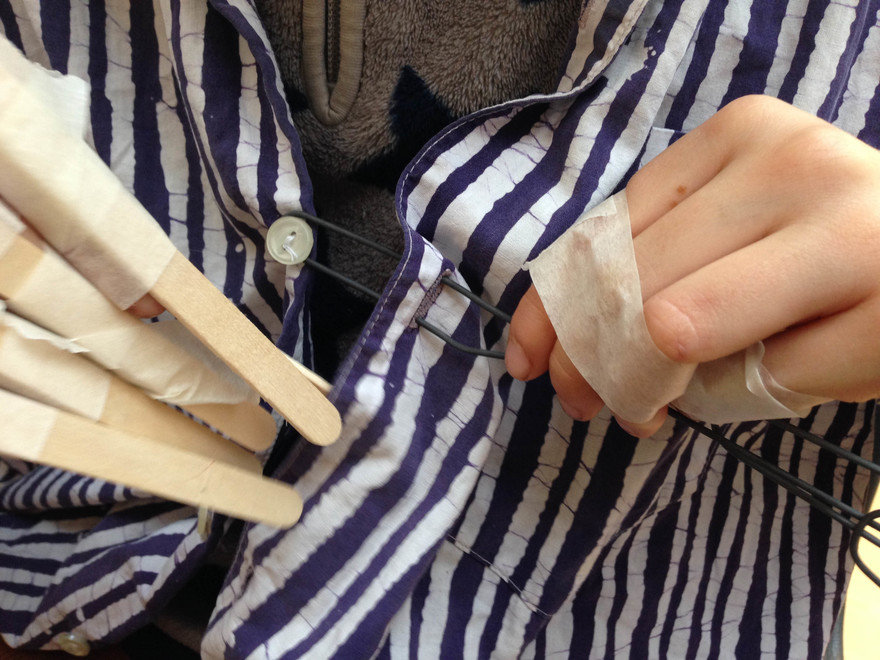 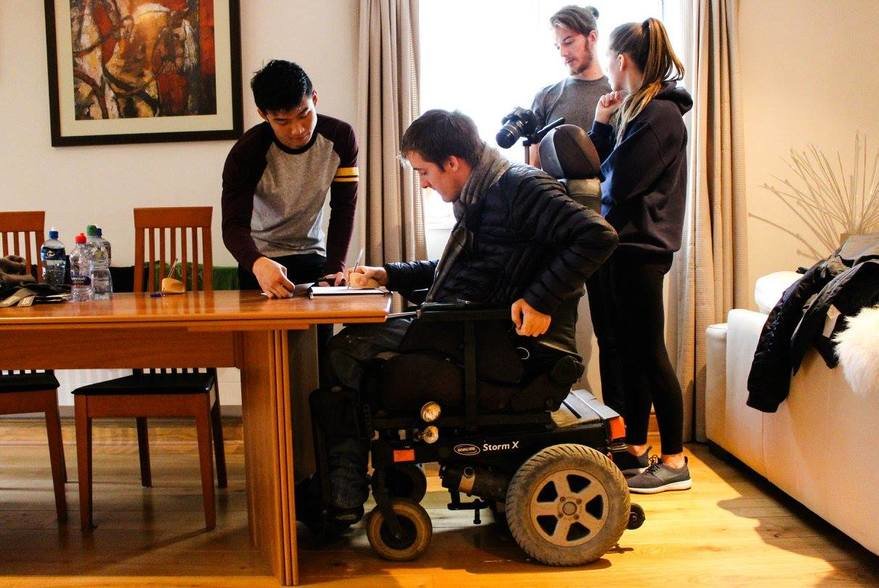 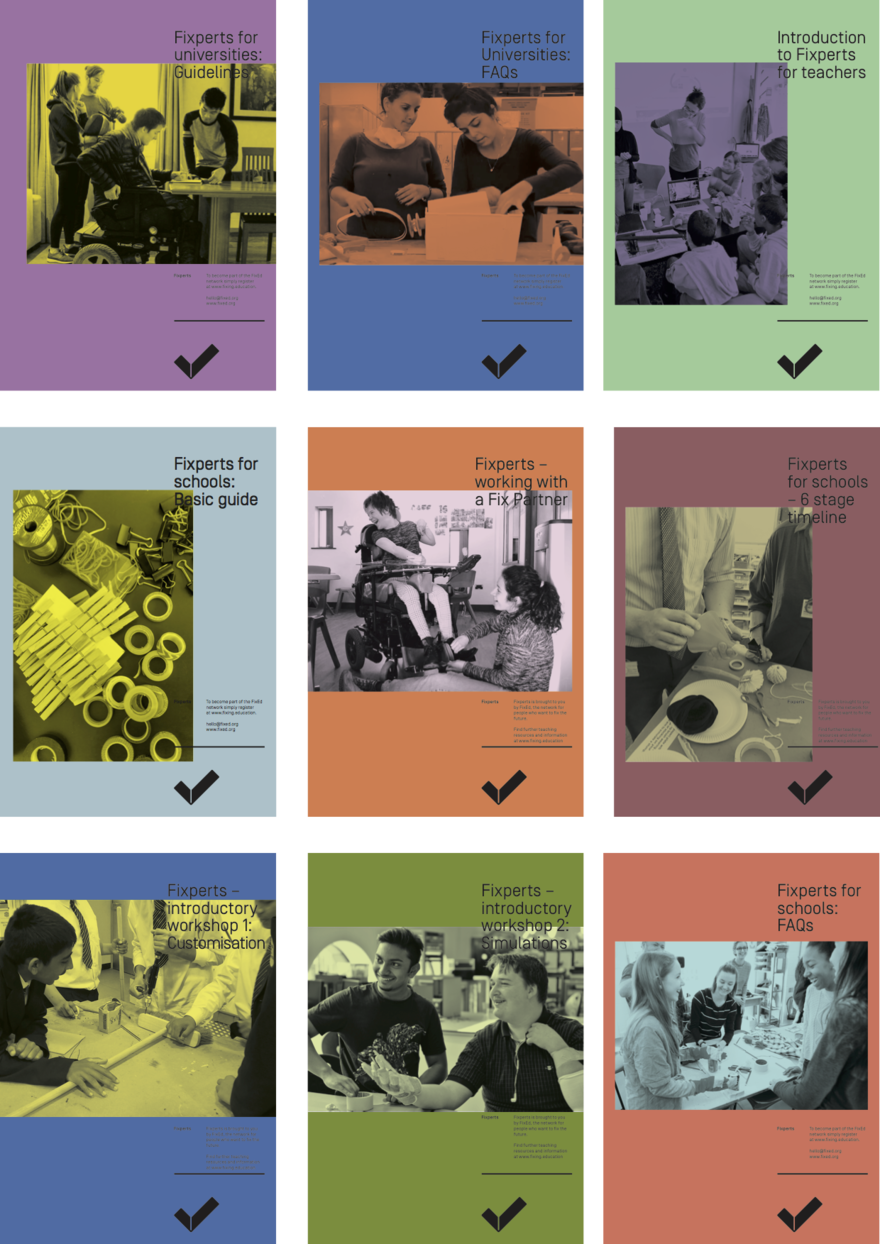 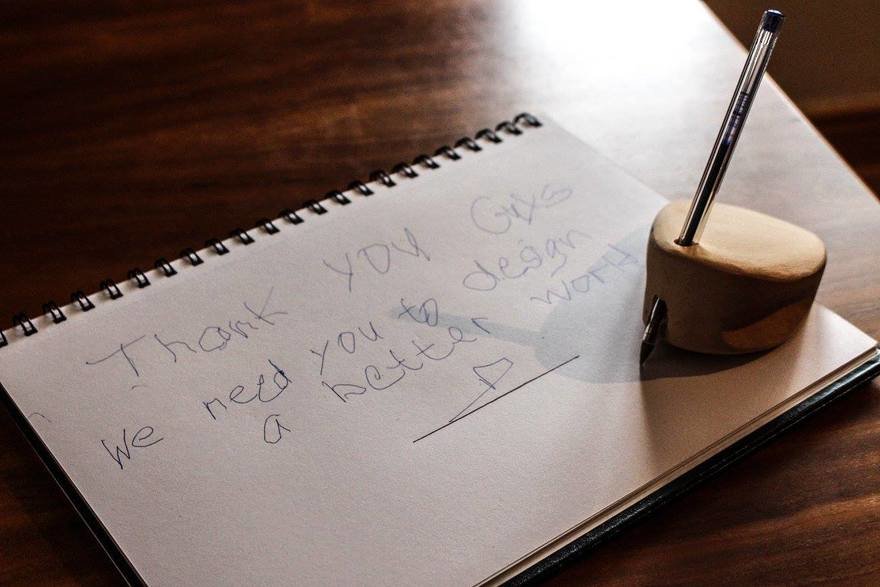 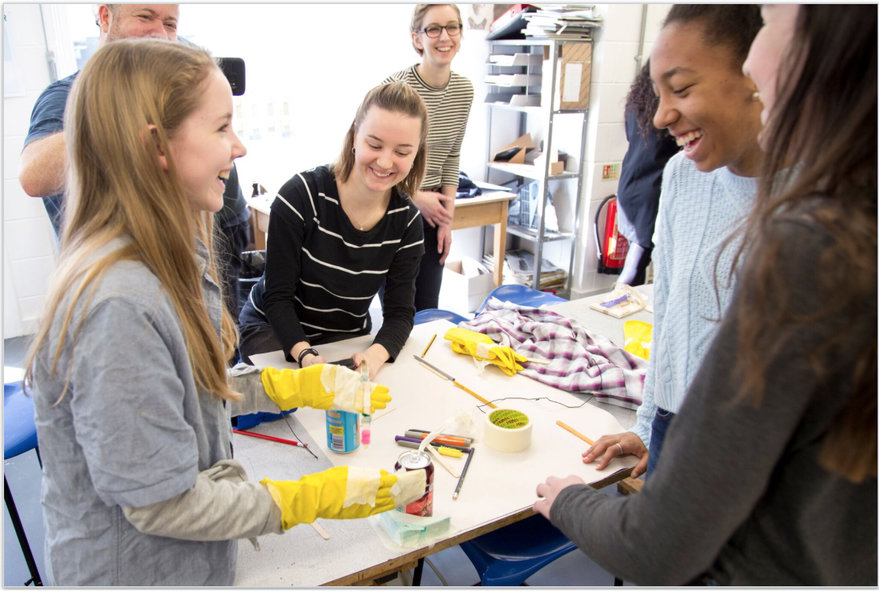 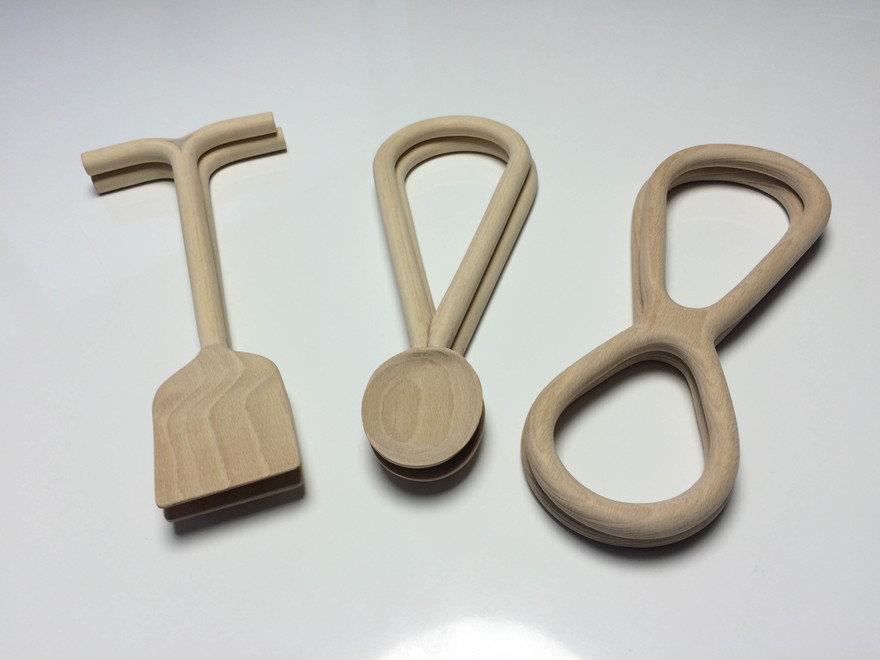 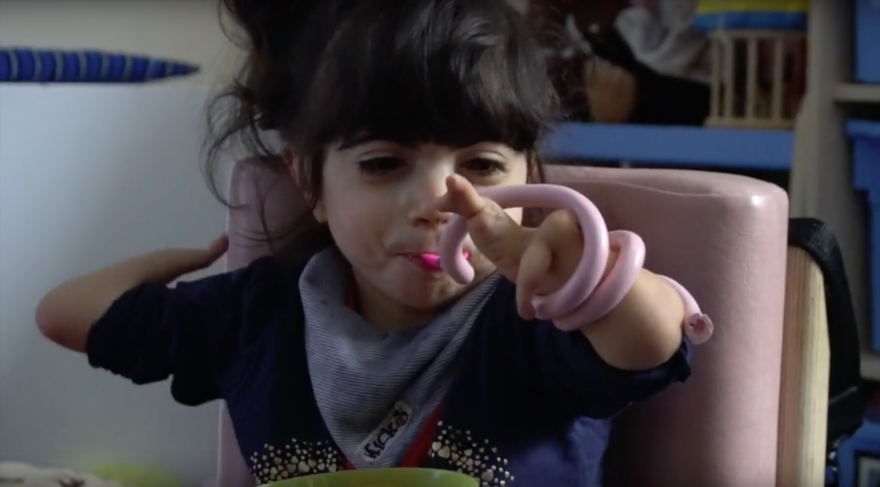 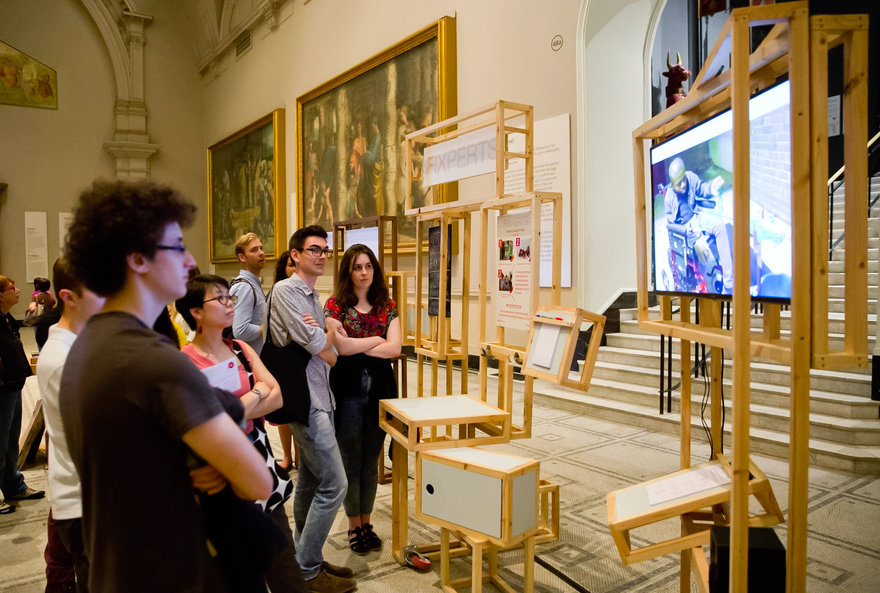 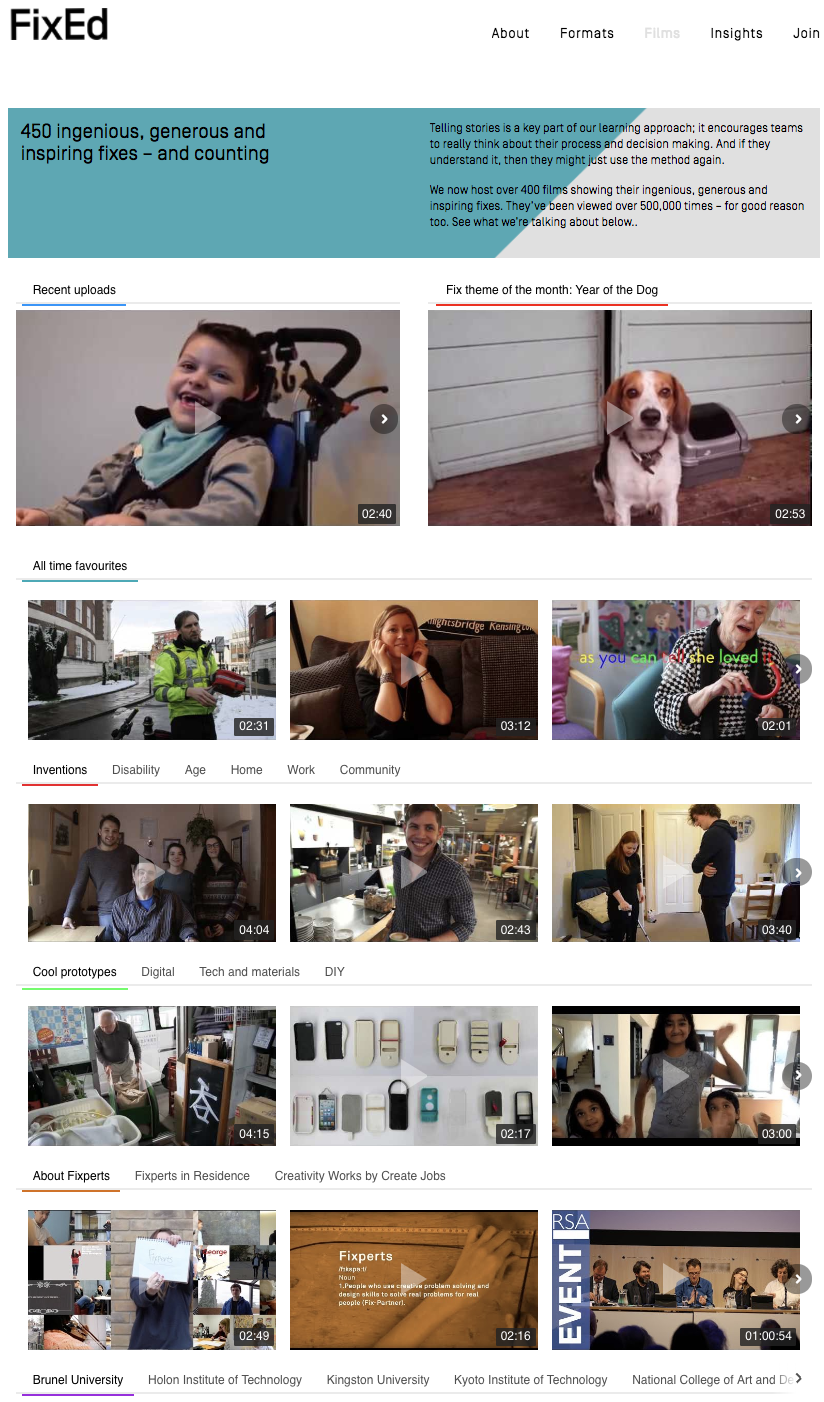 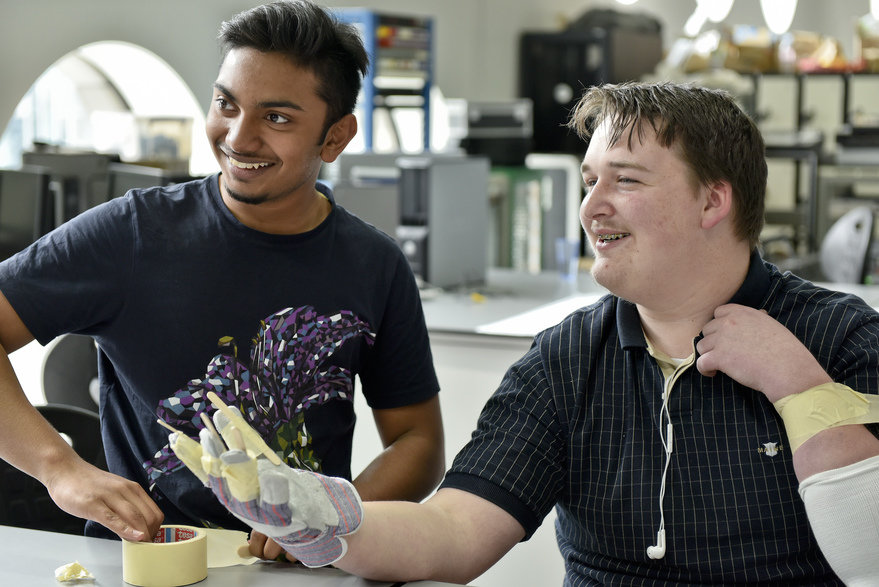 When Fixperts started in 2012, as a worthwhile, yet fun micro-volunteering activity for designers, founder Daniel Charny would use every opportunity in his day job as an educator and curator to rally support from anyone who would listen. He was often asked what the future might hold, and without compunction he would respond: "I want Fixperts to be studied as a GCSE" (the English national schools qualification at age 16). To say this was ambitious was an understatement; it was delusional. Fixperts was small, scrappy, unfunded and effectively uncategorisable in terms of subject or discipline. To some people it was about repair and circular economy, to some disability and inclusive design, while others again thought about it in terms of making skills and innovation.

In 2017 Daniel got his wish: Fixperts became part of a GCSE level STEM Award, followed closely by the release of 'Fixperts for Schools', a full set of teaching resources for secondary schools, matched to the Design & Technology curriculum. Fixperts had come to be recognised by designers and engineers as an example of the kind of integrated and hands-on approach which can engage a purpose-oriented learner, and deliver attitudinal change alongside skills and knowledge.

So why was it so important to establish Fixperts in schools? To Daniel, having worked extensively at university level, it meant that a much wider base could be engaged and benefit from what is, essentially, subversive thinking in current times. At secondary school level a whole range of students, not just designers, might get the message that imagination and skills can be applied, with ingenuity and resourcefulness, at speed and without cost, to shape the world around them and deliver benefit for themselves and other people. This, building on maker and hacker cultures, and accelerated by shifts in technology, is the Fixperts point of view.

Fixperts for Schools - how did we go about it?

In 2015, with the support of Kingston University, which had run Fixperts at undergraduate level for 2 years, we ran a Fixperts 'Super Salon' at the Campus Gallery. We gathered close supporters, including university tutors from 11 institutes, to discuss the pedagogy of Fixperts and what the future might look like. The subject of schools came to the fore.

We were keen to grow, but unwilling to embark on a new phase without properly understanding our achievements to date. With backing again from Kingston University, we engaged the Tavistock Institute to undertake an independent evaluation of the previous 3 years work, which by then included an archive of 250 fix films. As part of this process, we established our Theory of Change model, focusing on the benefit we wanted to deliver. Schools came up again.

Comino Foundation, a small trust concerned by declining vocational skills in design education, invited us to submit a funding bid. They helped us craft a pilot programme for schools, adapted from the already successful university resources. Schools resources needed to be more rigorous and directive, aligned with Design & Technology curriculum as well as STEM subjects. We delivered pilot workshops in schools. We also popped up wherever we could meet learners of the right ages - in school fairs and museums, in a library and festivals. We were probably a bit scattergun at this point, but we benefitted from each and every event.

In early 2017 we arrived at a final set of formats. Building on an in-house market research process and lots of conversation with generous organisations like STEM Learning and the Institute of Imagination we refined the proposition, shaped an offer and devised our delivery mechanism. Difficult decisions were needed, about how to make the most of our very limited resources. We invested as much budget as we could in rebranding - aiming for something striking and robust, capable of carrying us into the future. We were lucky to persuade Spin, one of the most assured design agencies in the UK, to work on our project. Meanwhile, we used online tutorials and a freelance coder to build a subscription-based website. We revealed our new direction in a talk at the Royal Society of Arts in July 2017, entitled Making Matters. Our new website went live on the 6th of September, timed to align with the start of the new school year.

Fixperts for Schools - what did we launch?

Fixperts for Schools offers a scheme of work for teaching Fixperts, and a set of classroom activities which can be delivered stand-alone or as part of a bigger project. These detailed guidelines and supporting materials are free to download. The resources include themed activities, such as customisation and simulations, and go into full detail e.g. templates for risk assessment, shopping lists and logbooks for students to record their projects. The resources are adaptable to class size, available materials or timeframe. Reactions have been encouraging and further extensions are planned.

"An inspiring and practical session. The workshop helped me re-evaluate how I teach the design process and I will definitely be using Fixperts' techniques with all age groups."

Behind the scenes we have teacher training packs, workshop scripts and, most importantly, we relaunched the films archive. By now 450 films, for the launch we moved from Vimeo to Youtube, enabling us to create a range of curated playlists. Through these playlists, our archive has been activated as a tool to support the schools' resources, with lists for different problem-solving approaches, subjects and themes, like prototyping, innovation or ageing. This archive is now open to all, from classrooms to anyone interested in or researching these areas.

Fixperts Schools - what benefit has been delivered?

We are about to embark on an evaluation project with our partners, STEM Learning, which will enable us to look in detail at learning outcomes, social and emotional benefits to learners in English schools.

For us as an organisation, the Fixperts for Schools offering has stimulated interest, collaborations and partnerships with new organisations, bringing opportunities to deliver these resources in different contexts. This includes adapting the resources for circulation to a network of thousands of ambassadors teaching STEM clubs, and events with Barclays Eagle Labs, offering teacher training within their innovation hubs.

The Fixperts schools' network continues to grow through the new membership portal on the website, now encompassing over 70 schools in the UK, and active, if early, conversations in other countries.

Most recently Fixperts has been highlighted as a case study for the potentially disruptive impact of the maker movement. The EU Horizon2020 CAPS MAKE-IT research project describes Fixperts as follows: "Engaging the next generation - The Fixperts program stimulates children and others to resourcefully improve the daily lives of people in their locality. If programs like these become a standard part of our education systems...they will help children to learn in a practical, self-determining way, and contribute to the growth of competent, autonomous and locally-connected makers."

In 2018 Fixperts will be featured in the V&A museum large-scale exhibition 'The Future Starts Here'.

Fixperts started in 2012 with Daniel Charny and James Carrigan doing some fast, fun activities with designers aiming to focus them on applying their creativity toward social benefit. A Fixperts team would use their imagination and skills to create ingenious solutions to everyday problems for a real person. They'd share their film telling that story, and more people might do the same.

In January 2013, Daniel Charny excited a number of tutors to try out Fixperts as a project in their universities. Open access to a short set of guidelines and resources published on the tiny new Fixperts website fuelled the take-up. The dissemination of Fixperts as an education resource was accelerated by Charny's 2014 Peter Dormer lecture at the Royal College of Art, in which he reflected on the role of making in design education.

Fixperts attracted volunteer support, but was a side project for everyone involved. As is typical for these kinds of projects, it moved from event to event on a tide of goodwill but lacked any infrastructure. It was only in early 2016, as enthusiasm started to convert into serious offers of support, Dee Halligan joined as director and Fixperts started to consolidate.

Fixperts incorporated in 2016, and restructured into FixEd think and do tank in 2017, casting Fixperts as one of a number of projects under this banner. We're still small, but stable, and punching above our weight in delivery, impact and turning support into plans. In summer 2018 we'll deliver FixCamp, a summer activity camp which complements Fixperts by bringing our point of view and characteristic style to larger scale problems and bigger scale builds.

Fixperts for Schools has been made possible by supporters including The Comino Foundation, the RSA, and the Helen Hamlyn Trust.