For years we have been separating our beings as humans from 'the nature'. The ways we articulate and design around the threats of climate change often maintain a dangerous distinction between environmental health and human existence. We act accordingly, separated by scales of time and cultural notions of the discrete elements of the earth. Under the stress of human activity, the planet's seas will rise six feet by 2100; its inhabitants will suffer mass extinctions and possible ecosystem collapse; its recovery undermined by synthetic toxins and fragile nuclear infrastructure. Recent efforts to recognize the legal personhood of rivers exhibit a possible planetary order that challenges the inevitability of our anthropocentric industrialized worldview. Considering the increasingly complicated relationship between humans and non-humans we saw a new space for design to address this inter-relational space. We questioned: What might we learn from these other ontologies? What can we find in the spaces of friction where they force industrialized systems to reconcile their dangerous exploitation of the nonhuman?
For us, this space is not a prescriptive answer for climate change, but a first step—an agitation whose reconciliation will demonstrate new ways to relate to the planet. This project is an attempt to lay out a path using design process for action in the Capitalocene. We discuss the development of this practice into an institution and unpack a few of its strategies for shifting the ways we think about the nonhuman.
As a case study for this project we turned to formal sites of acculturation. In schools, scientific diagrams include an anthropocentric politics that diminish our planetary interconnectivity. We wanted to introduce pedagogy tools that helps to reframe an ecocentric perception of the world in students. Thus we designed a curriculum using speculative scenarios. These lessons prompt students to speculate on new definitions, institutions, perceptions, relationships, rituals and technologies that might be needed in a reality that recognizes nonhuman agency, then backcast onto our contemporary condition. The goal is to enables students to redfie their relationship with nonhumans and co-develop respectful alternative interactions that has a more holistic vision of human beings in everyday life. 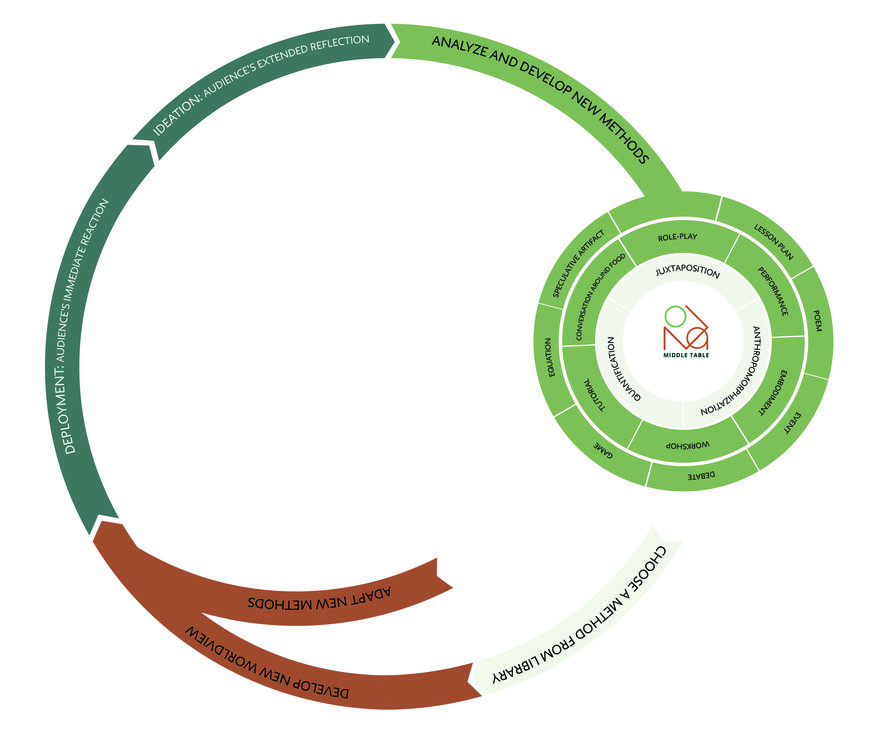 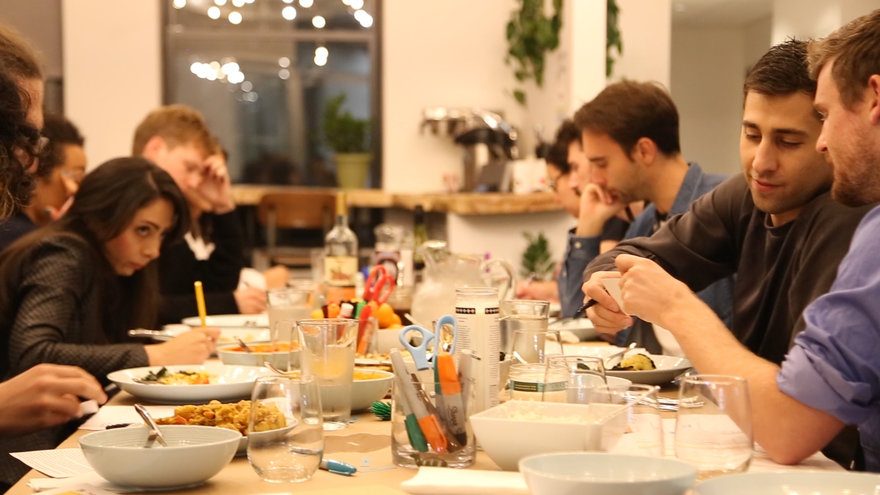 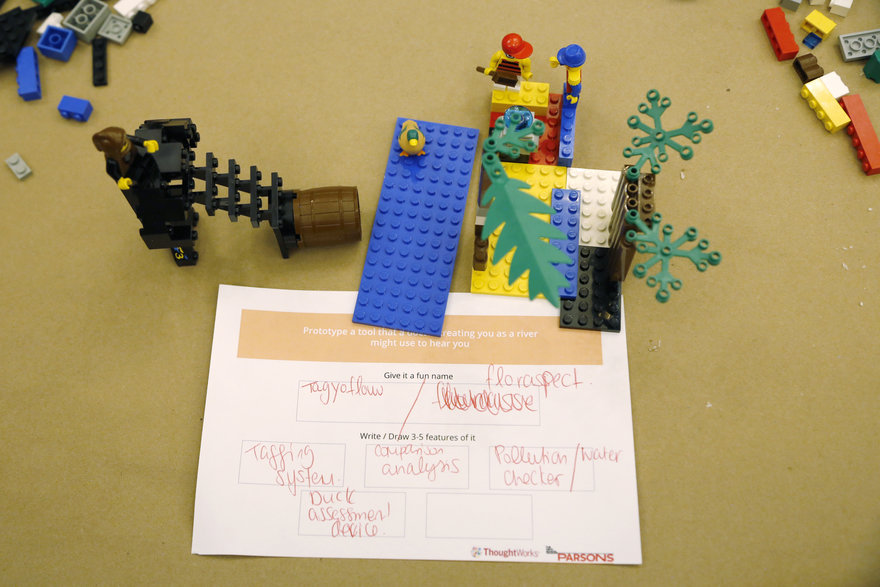 River Dinner Ideation Session A workshop participant creates a tool for the spiritual guide to hear final fears of the river. 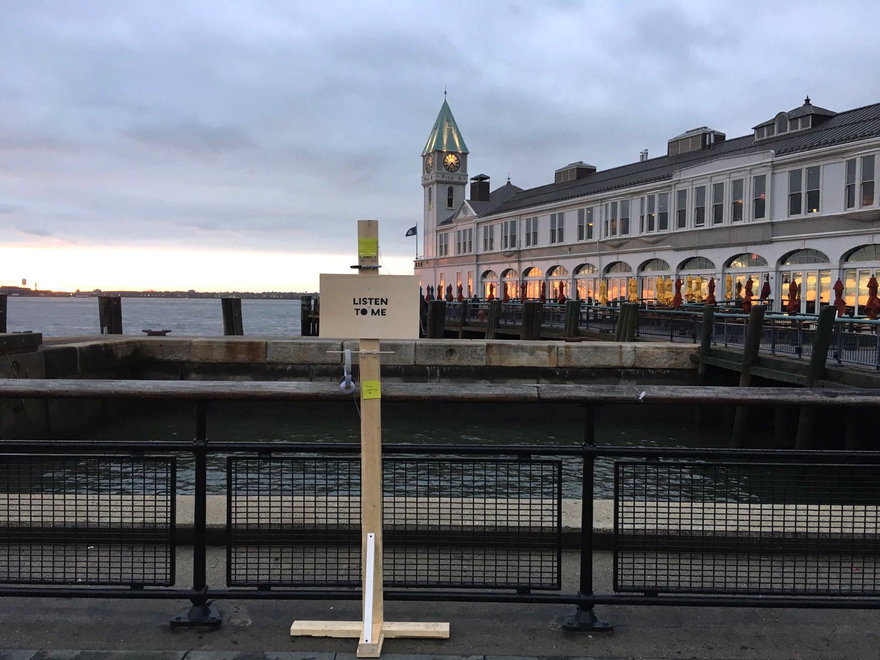 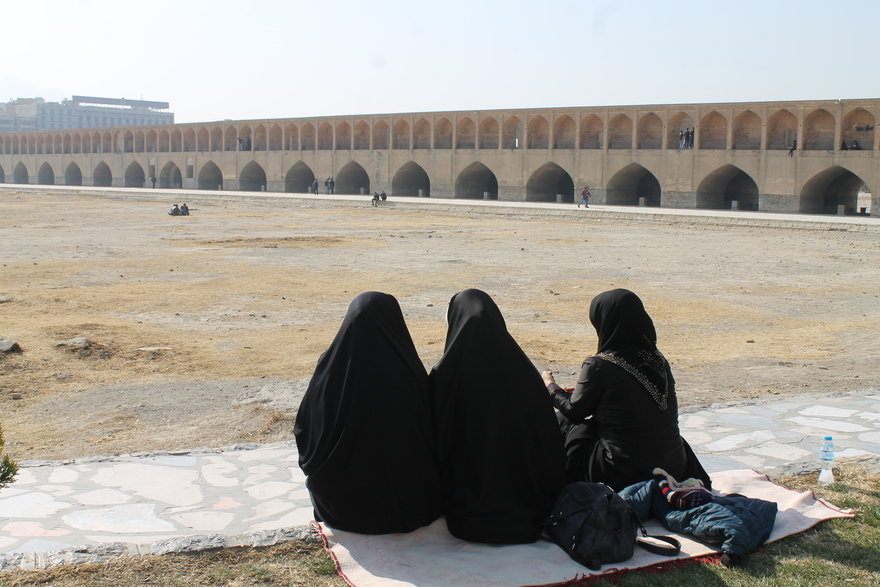 Mourning Non Humans Three Isfahani women picnic on the shore of the Zayanderud, as they used to when the river was still running. 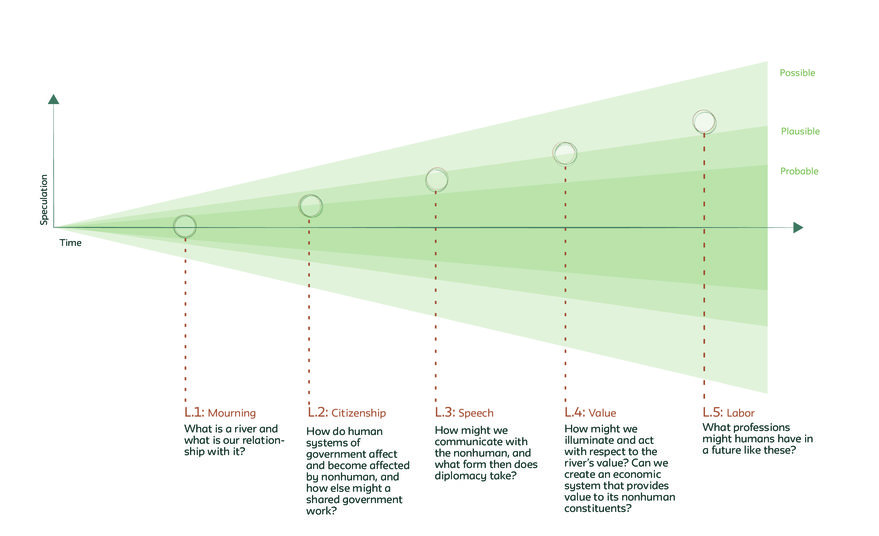 River Speaks Lesson Plan As students advance in the curriculum, the lessons become increasingly speculative and to trigger them to think about desirable futures. 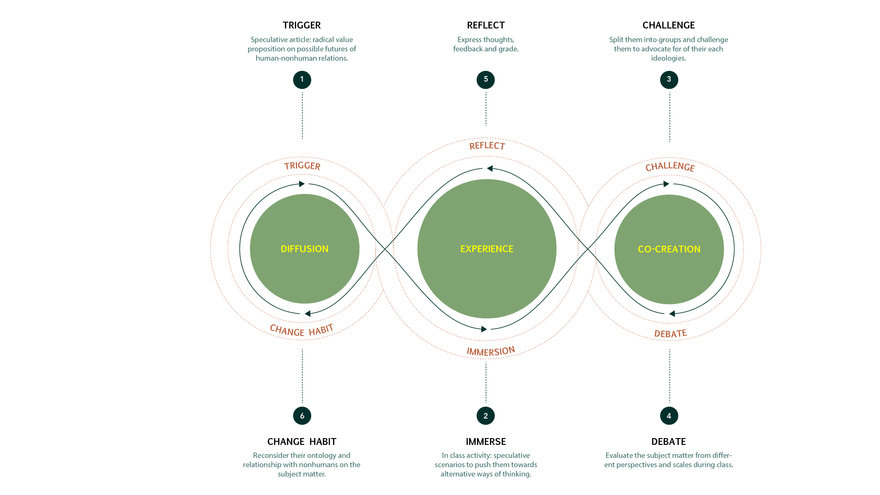 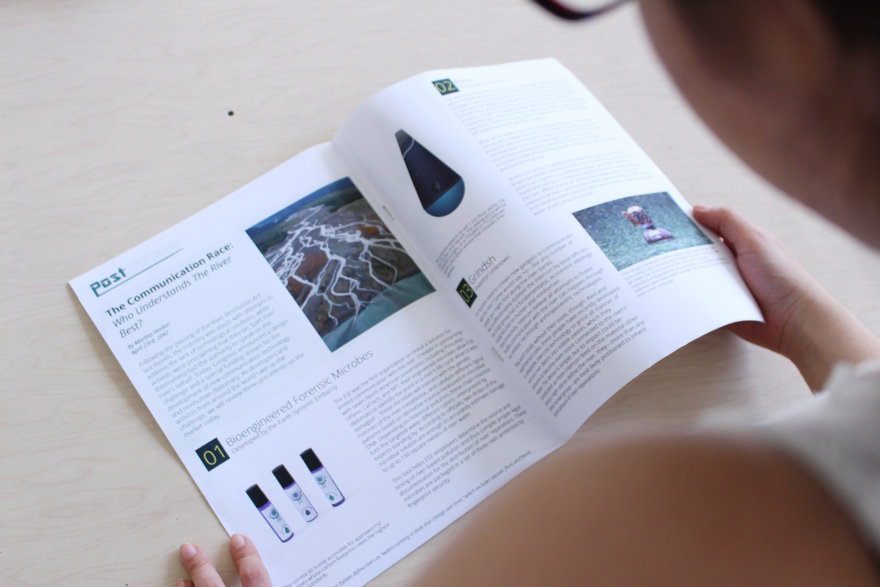 Postscreen magazine Artefact that serves for a pre-class read to prep students for the lesson of the day.

Design probes Artefacts that help students immerse into their roles and portray their ideologies. 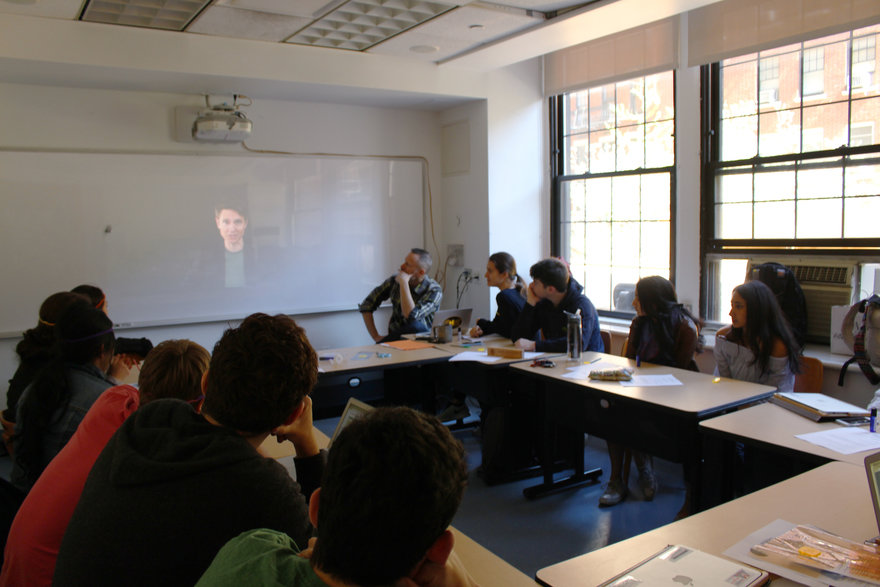 Testing session nTrepid recruitment video playing in the class for discussion during the test session. 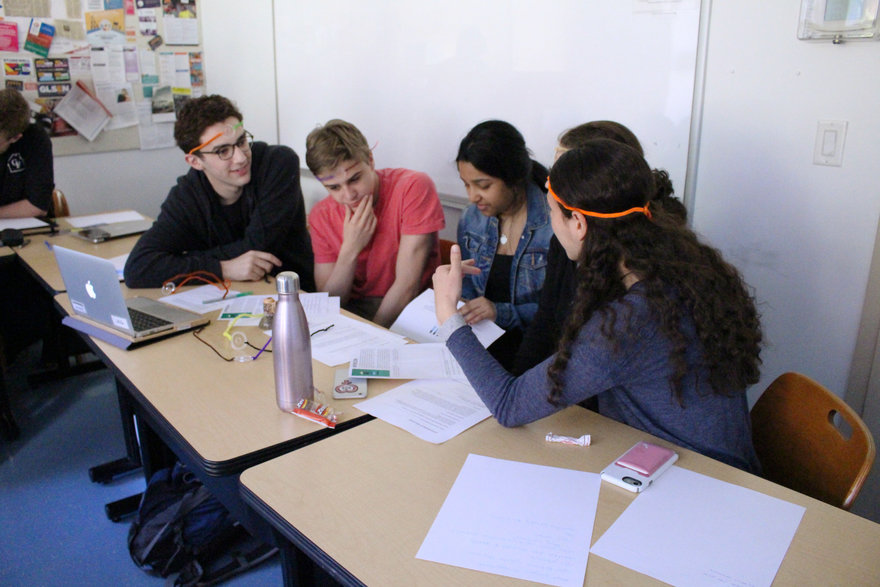 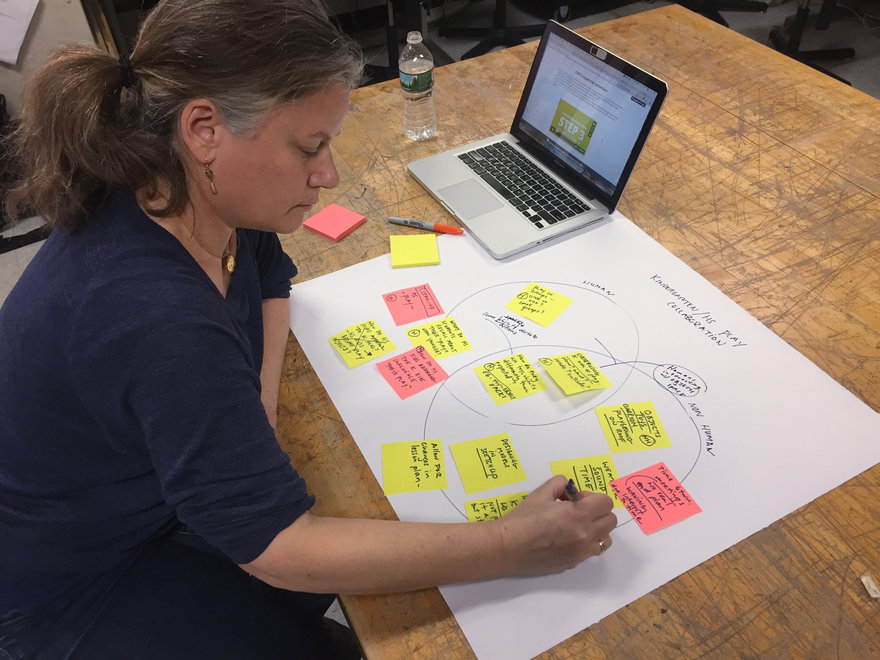 In 2016, the Maori people won a landmark settlement in New Zealand parliament, ending a legal battle that had persisted for over 140 years. The legislation proclaims, as the Maori have insisted, the Whanganui River "is a legal person and has all the rights, powers, duties, and liabilities of a legal person." This would be the first of other rulings around the planet recognizing the personhood of what many Western cultures would designate as things.

These settlements come as humans around the world begin to grapple with the Capitalocene: a geologic epoch in which the planet has become physically redefined by capitalism. Sea levels will rise six feet by 2100, its species struck by mass extinction threatening an entire ecosystem collapse, and any recovery threatened further by human toxins and fragile nuclear infrastructure. Following two hundred years of industrialism and globalization, we are at an ecological breaking point, and without a mainstream vocabulary or cultural worldview to express the extent of this danger.

In the midst of such pressing problems, we call on design to take a nonhuman turn—to recognize the existential value of a nonhuman-centered agenda. Design should both initiate critical reflection of its anthropocentric ethics and bolster the most "public debate"—where the ratio of those affected to those making decisions becomes less extreme, and therefore less human.

Using speculation and embedding it within human institutions, we believe design can articulate alternate, preferable worlds in material form and suggest steps toward them. In the midst of such complicated posthuman politics, we want to work toward an ecocentric mindset using narratives, material, and culture. But by making tangible a world in which nonhuman agency is recognized differently, by suggesting alternatives, we seek to challenge modern naturalism and investigate an ecology from other perspectives. Yet how can we deploy an ecocentric perspective—one that considers a larger network of actors—in a way that has staying power?

One of many possible strategies is changing the way we teach and learn about nonhumans. The River Speaks takes this leverage point. The project is a set of lesson plans that challenges traditional notions of the nonhuman. They prompt students to speculate on possible new definitions, institutions, perceptions relationships, rituals and technologies that might be needed in a reality that recognizes nonhuman agency; reflect on the cultural shifts that might happen (both good and bad); then backcast onto our contemporary condition.

The five-day lesson plan follows an important order. On the conceptual level, the first explores nonhuman influence, which the second then extrapolates into systems of political and represented agency. The third builds on these formalized interconnections and begins to consider the technology of communication. The fourth then extrapolates the possibility of multilingualism to illustrate alternate forms of value and the economic structures built around them. The final lesson then provides a forum to backcast and connect the dots between the speculative worlds of The River Speaks and the contemporary condition.

The lesson plans also become increasingly more speculative, allowing both the teacher and the students to ease into alternate worlds without as much distraction about their feasibility and more attention to their logic and its implications. Lastly, the progression moves from more familiar anthropocentric scenarios (human grief) to less familiar ecocentric ones (nonhuman economies).

We developed teaching tools that immerse students in these future worldviews and help teachers facilitate a critical reflection. In the third lesson focused on technology and speech, three different "recruitment videos" orient students to the values of three different stakeholder groups shortly after the River Restitution Act has been approved by congress. This fictional mandate lays the groundwork for the river to receive reparations for the harm inflicted upon it by humans, and raises an array of pressing questions—primarily, how might we communicate with nonhumans, and how do we define them and the limits of our (inter) relationships?. These must be reconciled by the triad of human(ish) stakeholders whom the students embody. These lessons were tested and refined at The Dalton School, where high school history students embodied characters from the factions we designed, then filmed their own responses to how River Reparations should be paid.

The first of these groups is a public institution mandated to represent and protect the nonhuman persons in the country. The Earth Systems Embassy has been entrusted with the responsibility of deciding the size, source and eventual use of reparations paid to the river. Positioned as a kind of public gatekeeper, they are seeking new strategies for communicating with nonhuman constituents, and for determining the river's preference for how it might want its awarded money spent. Crafted in part as a reflection of Bruno Latour's "parliament of things," the Earth Systems Embassy is another possible manifestation of nonhuman voice in governance. Though it may be mired in bureaucratic process, the embassy is, at its core, formed to serve its nonhuman constituents—perhaps similarly to an ethos of stewardship, but slightly less anthropocentric (is it patronizing to assume humans are needed to protect nonhumans? What about nonhuman infractions upon human citizens? Their cultural contributions?). The embassy may be subject to political wranglings in the halls of human government, but ultimately it is not a commercial institution; its assets are based on strong relationships, not financial investments.

While the Earth Systems Embassy is tending to the treatment of the nonhuman at an institutional level, a groundswell of entrepreneurs have seized the demand for new and more accurate methods of hearing river-speech. nTrepid, an ecological tech start-up, is perhaps at the forefront of this communication race. nTrepid's leadership has enormous confidence that technology can solve this language barrier, and they have set out to develop a device that will serve as interpreter. Despite their lofty aims, nTrepid is dealing with conflict-of-interest complaints on the grounds that any new technological developments may not be completely objective, given the company's investors likely owe a fair sum in river reparations. Students playing the role of technologist must begin either to define the river and its voice in a measurable way or seek to reimagine a technology that makes its judgements based on something else. They are cast as technological optimists, yet because of the allegations calling their neutrality into question, they must proceed with a deliberateness and attention to competing perspectives. Students ultimately explore how the tools we use affect our ontologies.

Finally, while these human institutions shift their focus to the nonhuman, another camp of detractors is taking shape. This group is much less formal, but perhaps the most avid: the intercon, as they call themselves, are an affinity group who have been so completely acculturated to understand their interconnectivity with nonhuman actors that they no longer identify simply as humans, but as networks of species. They have developed new language, including a new pronoun, that better expresses this identity. For students, the intercon are perhaps the most difficult to embody given the strength of their self-system-awareness. With a similar matter-of-factness one might locate themselves within the construct of gender, intercon interconnectivity is as essential and serious as their own self-identity. While intercon are far less able to exert an institutional muscle in the race to define and communicate with the river, they are organized. In fact, their sense of self has bred an argument that those who identify as they do are due a substantial portion of river reparations, since that ecological system is—they argue—as much a part of their being as creatures non-intercon call human.

These narratives serve as content that teachers can then arrange in a variety of ways depending on different learning objectives. The main goal is to illuminate some central issues in post-human politics, and ask students to leverage that knowledge creatively through debate. A suggested assignment in the package is ask each group to decide who should pay for and receive river reparations, propose a way the river might express where that money should go, and record a video of their proposal.

The River Speaks is one prototype in a larger project of designing beyond the Anthropocene. New, less human-centered curriculum is one of many possible tactics. Ultimately, we must embrace a new kind of practice—one that does not presume to have answers, but instead forges new mechanisms, often through speculation, by which better questions are possible.