The world is filled with devices promising to make life simpler and more efficient -- and millions more are on the way. But we're often left with the work that makes these devices function, from the initial startup to constant troubleshooting and maintenance. Aether's goal is to create physical objects that work seamlessly in our everyday lives without any of this maintenance hassle.

Aether combines beautiful design with sophisticated technology to make everyday experiences more enjoyable, untethering us from the screens on our phones and devices so we can spend more time enjoying the moments we're in -- and their first product, Cone, brings that ease to the music space.
The world has changed a lot since the days of records and CD's. Steaming services offer endless choices, but that doesn't always make life better. Often, it means we settle for silence because making a choice becomes harder than we planned. With Cone, Aether hopes to put music back into our daily lives -- simply and beautifully.

Cone uses contextual computing to make our interactions with Cone simple, recommending songs based on where, when and how we listen and puts it all behind a natural user interface: a dial. Intuitive gestures and directional turns lend themselves to an inherent sense of easy control, such as right as next, left to restart, etc. Cone also learns from your inputs - like skipping a song, turning up or down the volume, or using the voice control to ask for a song - to build a listening experience tailored to you. It's almost like having your own (very stylish) personal DJ.

All credits go to "Aether" 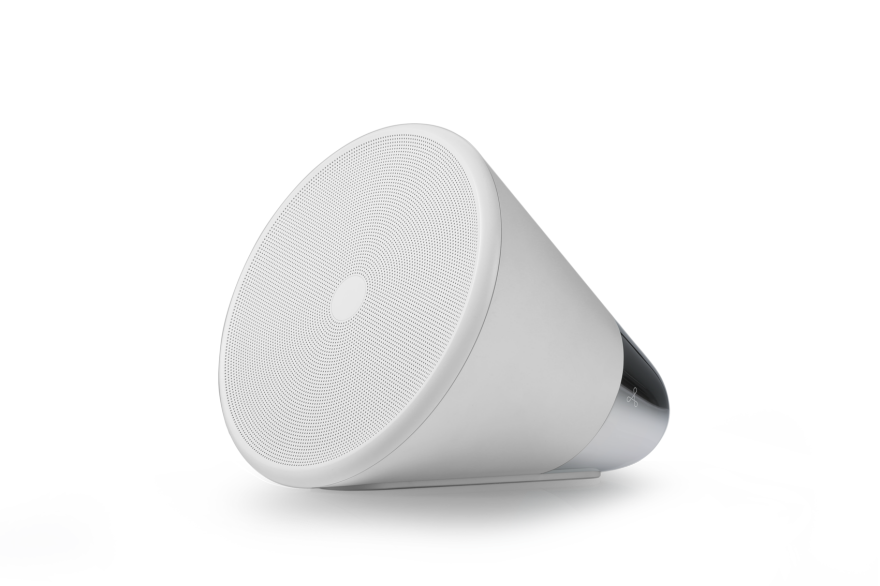 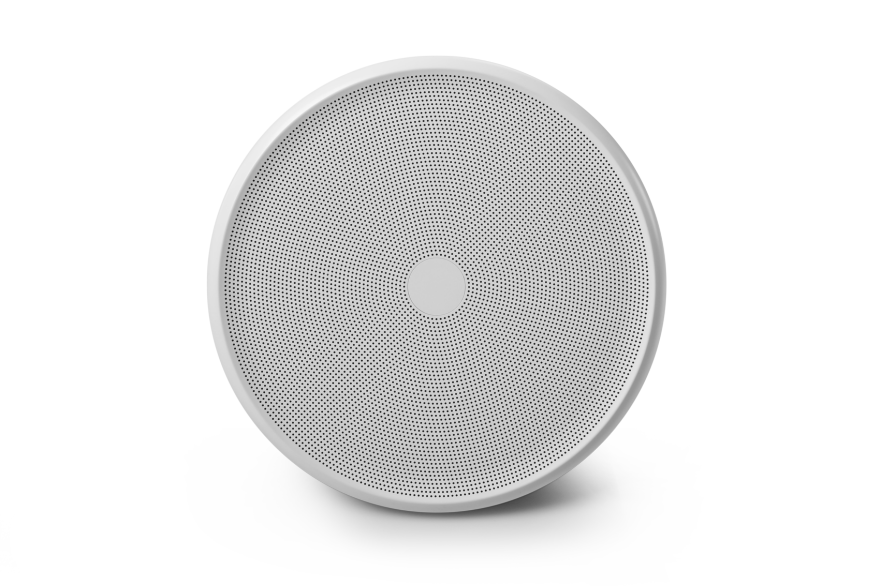 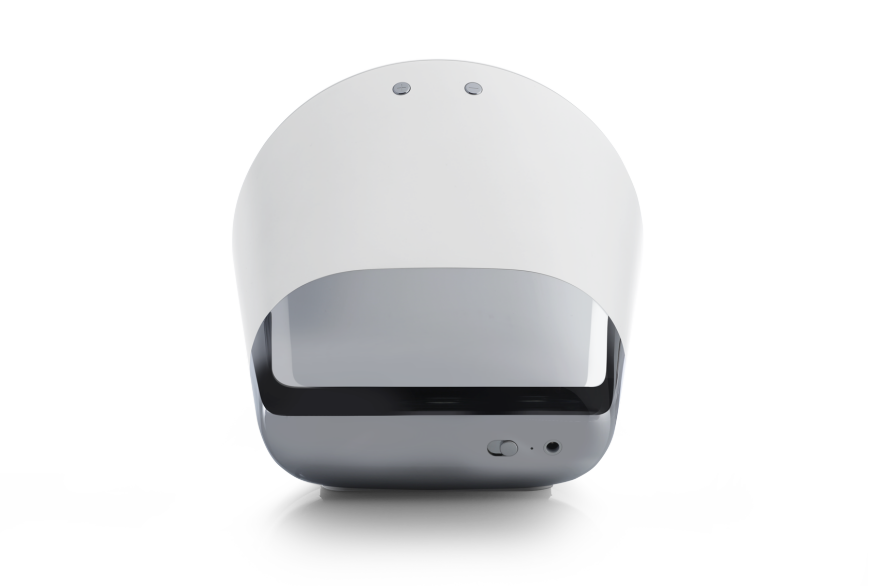 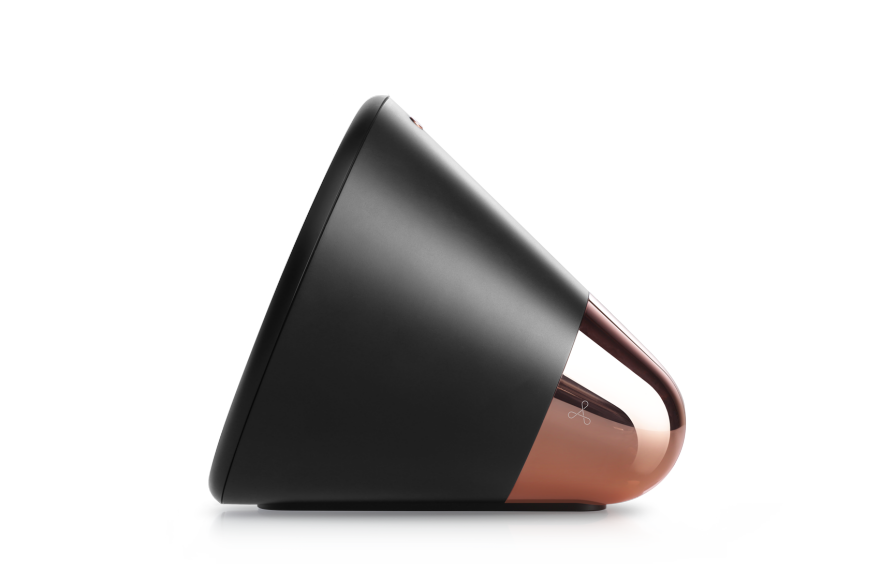 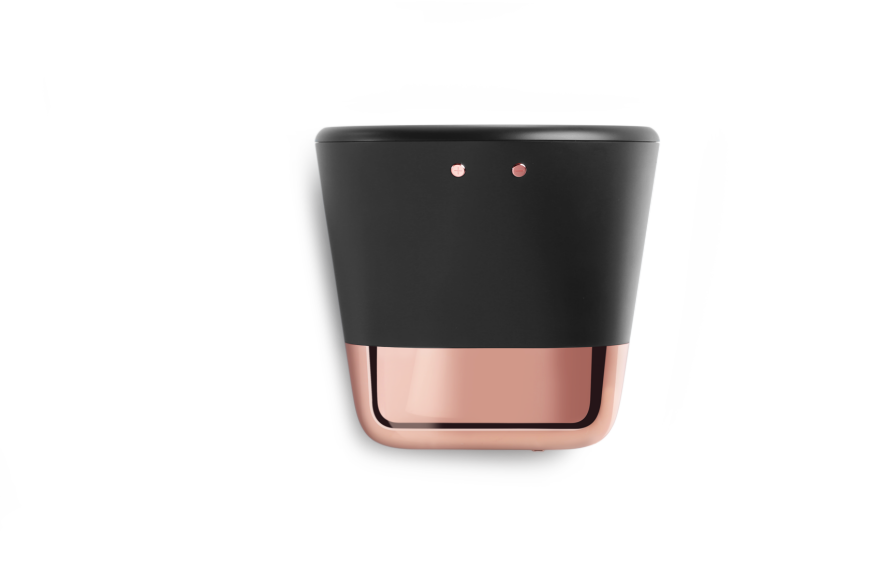 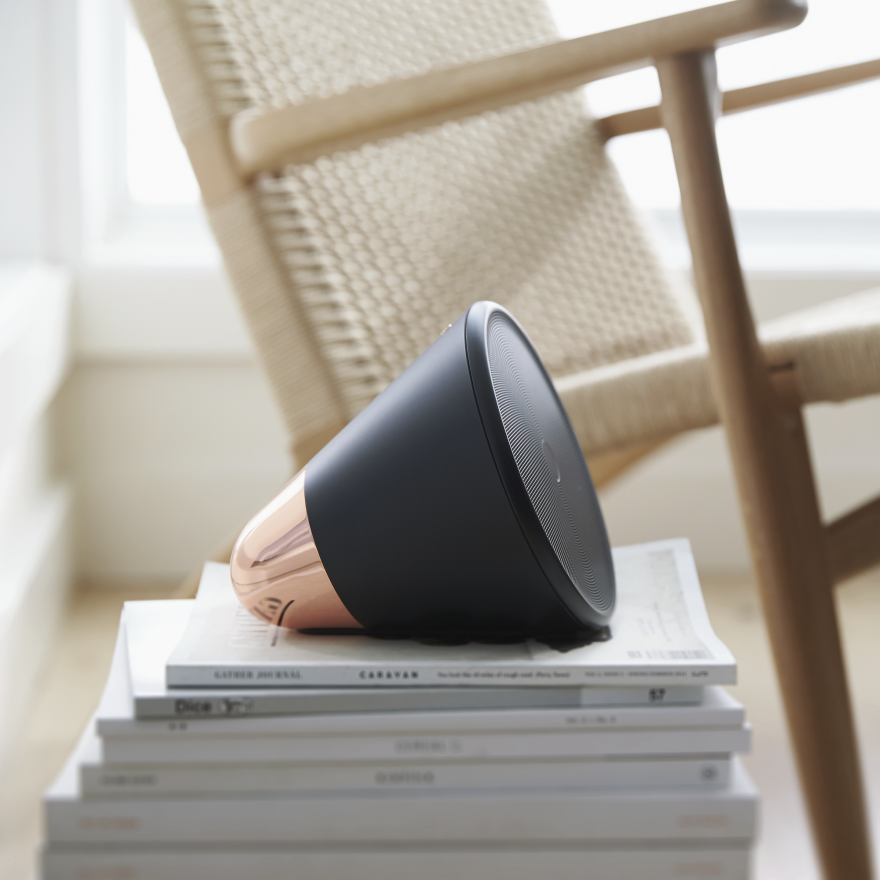 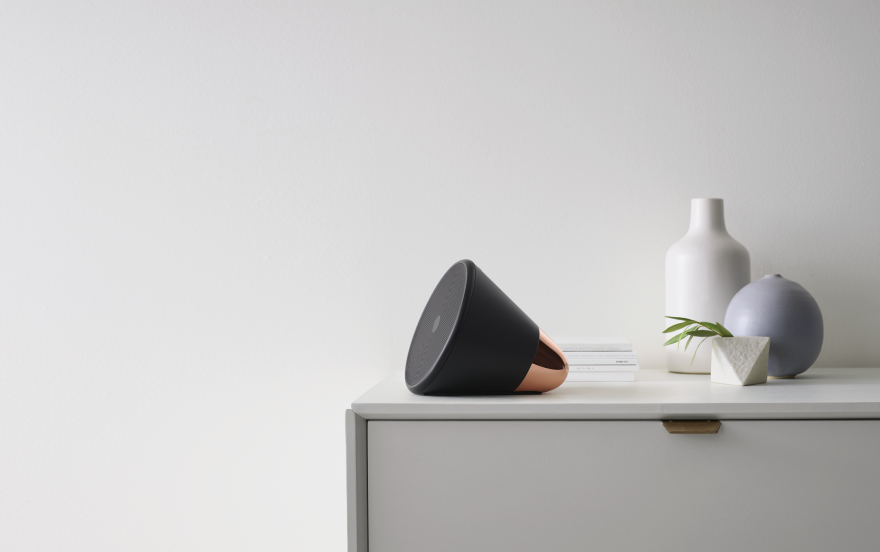 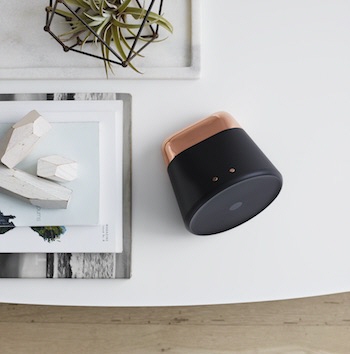 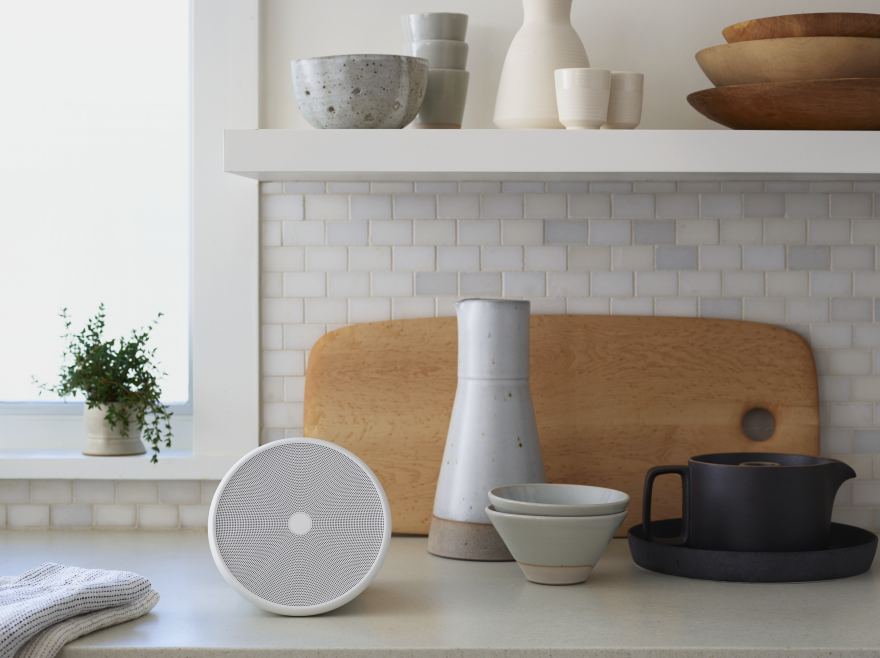 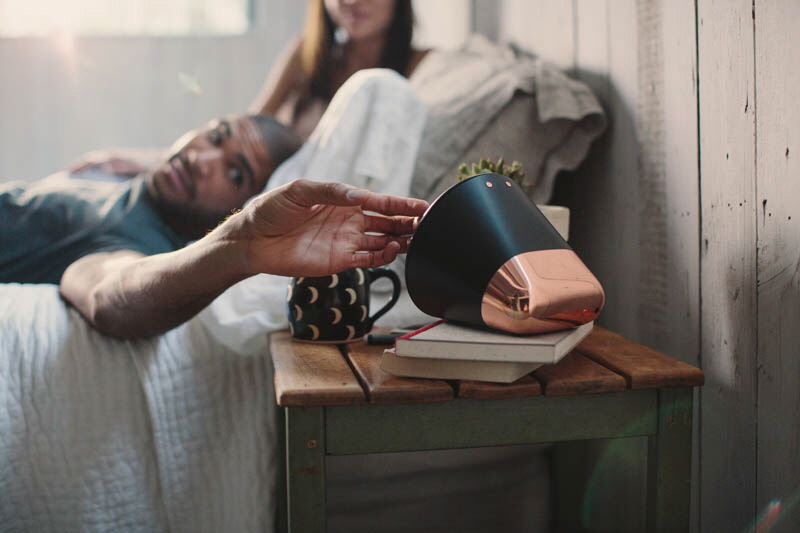 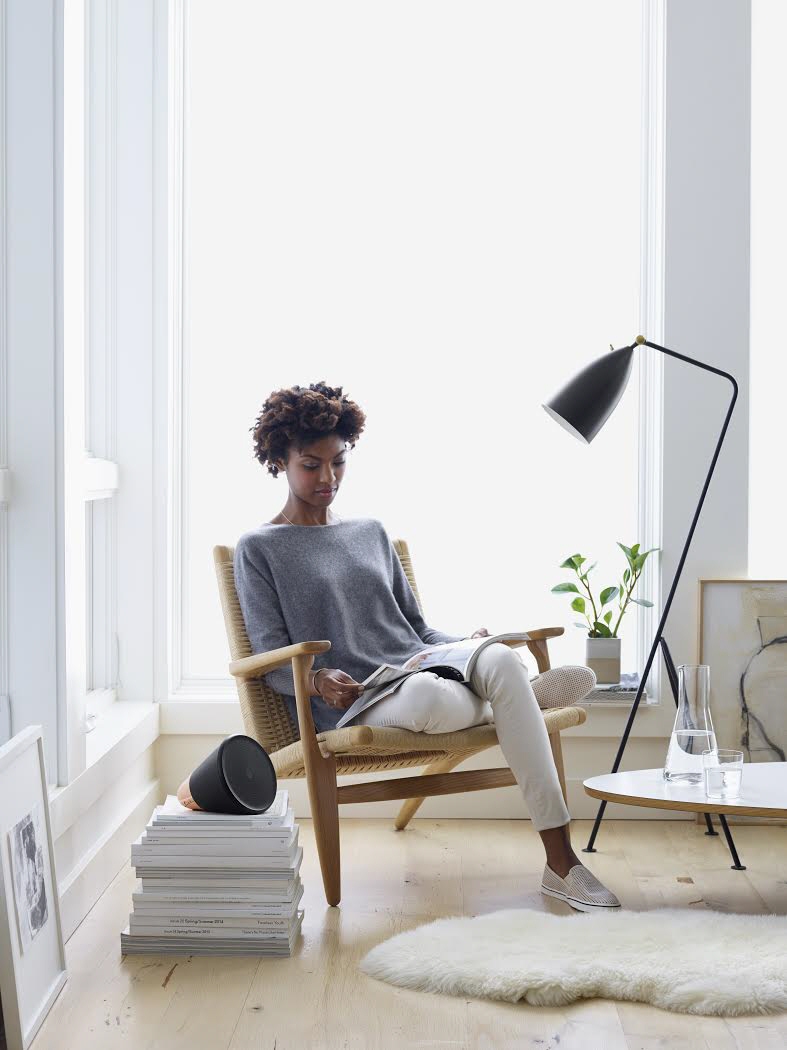 Cone is the first music player to learn what you like and the context in which you're listening to play the perfect sound for the moment. Cone is emblematic of Aether's belief that technology should make life simpler; it combines incredible machine learning software and beautifully designed hardware to free us from the management required by our phones and other devices -- simply letting technology do the work for us.
Cone takes listening to music back to the simpler age of radio, when all you had to do was turn it on and be carried away by the sound. Aether aims to elevate the simplicity of this experience with Cone -- playing music that intuitively matches the users' desires at any moment without requiring direction from an app or remote.

Instead, Aether designed Cone with four basic controls: an on/off switch, two small volume buttons, a central button for voice control, and a dial-like speaker face for skipping songs and genres. As the main user interface, the novel and minimalist front dial (a turn to the left to replay, right to skip, tap to pause) integrates Cone's primary tactile interaction into the main form in a simple and seamless way. If Cone is playing something you like but isn't quite right, give the dial a small spin and it will skip the track and play the next song within a similar vein. If you are looking for something entirely different, give it a big spin, and Cone will play a new genre of sound.
Cone also uses contextual signals - such as location, time, and user interactions like skipping songs, changing volume and voice requests - to select the perfect sound for any moment. For example, on Wednesday evening you ask Cone to play Frank Sinatra using the voice control. The next night it's not necessarily going to play Frank Sinatra, but something similar. And if that's not right for the situation, you can simply turn the dial and it will slightly deprioritize that song -- creating a tailored listening experience.

By bringing together the natural interface and sophisticated contextual learning software, Cone naturally blends musical discovery into the listening experience. And while Cone's contextual learning suggests songs based on where, when and how you listen, the ability to also verbally request songs through center button, creates a two-way conversation. That way you have a choice, but you also have suggestions.
The idea of Cone was born from a discussion about the ways in which our everyday lives are affected by the Internet of Things (IoT) and the plethora of connected devices on the market. We've come to own many different kinds of these devices but the more we own, the more work we do to maintain them and keep them all performing properly.

The team at Aether researched the ways in which average families interacted with the IoT devices in their homes -- how they used them, where the pain points were and what the solutions could be. One of the more significant patterns that the Aether team saw when they visited people's homes was around families' music listening devices. Often these devices were wireless speakers with functionality tied to streaming services. Aether found (somewhat surprisingly) that while the connection to streaming services made music more accessible, people actually ended up listening to less music. The ability to choose from millions of songs online actually intimidated people, making it more challenging for them to decide which song to play next -- to the point that they preferred to make no choice at all.

In fact, during one home visit, the team discovered that the family had a traditional radio and a high-end speaker located on the same shelf, but the radio was the device that got the most use. The family members said they loved that they could turn the radio on and it played something that "generally wouldn't suck and that was good enough," instead of having to sift through the millions of songs offered by the high-end speaker. The Aether team realized that people had traded the ease of listening to music, a previously frictionless experience via radio, for seemingly endless choice.

That's when the lightbulb went off.

With Cone, Aether aims to make listening to music more direct, enjoyable and intelligent. Cone combines streaming services' ability to offer people millions of musical choices with the ease of using the radio and, as such, is intended to be both a functional and aesthetic embodiment of simplicity. However, it's incredibly complex to make something extremely simple.
In many ways, Cone is a design solution formulated by way of subtraction and is defined just as much by what it doesn't have as much as what it does. The Aether team worked to reduce the on-device user interface to what people really need, clearly separating each function for its respective purpose -- whether that's finding new, curated music through the turning motion of the dial (referencing the classic knob on a radio) or the direct tap to play or voice command on the front.

Cone is also the first physical manifestation of the Aether brand, and Aether explored many iterations to best apply the design language that reflects the brand's core philosophy: products that are less technical, more harmonious and more integrated into people's homes and lives. Each subsequent iteration sought to maintain the delicate balance between design, user experience and performance. For example, the designers had to balance the size of the dial to ensure it was both comfortable enough to spin and maintained substantial acoustic volume.

These trials led to a final iteration with an approachable gesture and character that also spread sound at an optimal angle. In fact, Cone's profile is, in essence, the icon of amplification, and the conical shape is also great for acoustics – it's actually one of the most optimal for perfect sound. Lastly, the metal back cap was added to help create structure and heat deflection while visually reflecting its environment to gently fit into home environments.

Thanks to its design features, Cone situates itself easily into any home and into any atmosphere. But Cone's real value, it's most beautiful feature, is its ability to enable us to gather together and to spend time enjoying the moment, undistracted by our phones and mobile screens.

We live in a world of connectivity where our phones never leave our person; they function almost as an extra appendage. We've become so accustomed to focusing on our screens that we've allowed our phones to change our nature and the nature of being together. At the sound of a "ping," we automatically abandon the moment we're in and remove ourselves, falling down a digital black hole. Cone represents a paradigm shift away from such tendencies, away the world of devices.

Aether encourages us to be comfortable having technology make our daily experiences nicer and simpler -- and those experiences often don't require our phones. Changing people's behavior, especially regarding devices tied so closely to our daily lives, is a difficult task -- but one that Aether believes will make the everyday ultimately much nicer.

Very beautifully designed object that is timeless and challenges manufacturing.

It really pushes boundaries in terms of usability and control...Introducing a beautiful speaker that is timeless, that consumers will love and use.