Synchro is a new regulator which can prevent a diver's death; designed based on the analysis of individual breathing patterns.

There are a number of unexpected situations that can occur when you explore submarine areas. In particular, panic attack or panic disorder is a common situation. When panic is serious, you cannot control yourself and you might need someone's help. There are a few prescriptions or descriptions to help us deal with panic in various situations. For example, we can call an ambulance when it is serious, and we can ask others to help us. However, what about underwater situations? Imagine that you are stuck in an unexpected situation underwater and become anxious about the uncertainty of your safety. What would you do to overcome it?

This project is about how to efficiently understand the breathing patterns of a diver to minimise potential risk of death. This can be accomplished by giving feedback to the diver by making them aware of their current breathing pattern, and warning them of any change by comparing with normal breath patterns.

Panic situation - It is a fact that one fifth of all diver deaths can be directly attributed to panic, according to the National Underwater Accident Data Center. Another 22 percent of fatalities remain a mystery. Considering the number of divers who are recovered with working equipment, plenty of air, and their weight belts firmly in place, most experts believe that death due to panic is far more common than reported. Panic can kill in any number of ways. Rapid, shallow breathing can cause hypoxia and a buildup of carbon dioxide, causing the diver to act irrationally, breathing faster, expelling the regulator or bolting to the surface. These panic responses can make you pass out, or even have a heart attack if you have a weak heart. Panicking also hinders your ability to solve problems and get to safety when your equipment malfunctions.

Why do divers panic?- When you under water, a lot of things can make you upset and effect your breathing patterns which can trigger panic. This could be for example that you are kicked by you buddy, you could be breathing incorrectly, equipment malfunction, or you could be attacked by small fish. "Any of these small triggers or just being under water can cause bigger problems such as panic attacks, drowning, decompression sickness and even death. So, what if it is possible that we can detect pre-panic or this kind of potential danger in advance?

Solution - My solution for preventing diver's death started from an analysis of individual breathing patterns. And the analyzed pattern will be applied to diverse situations. Basically, the main concept of this design is to give feedback to divers to let them know their current condition as compared to standard and current breath patterns. 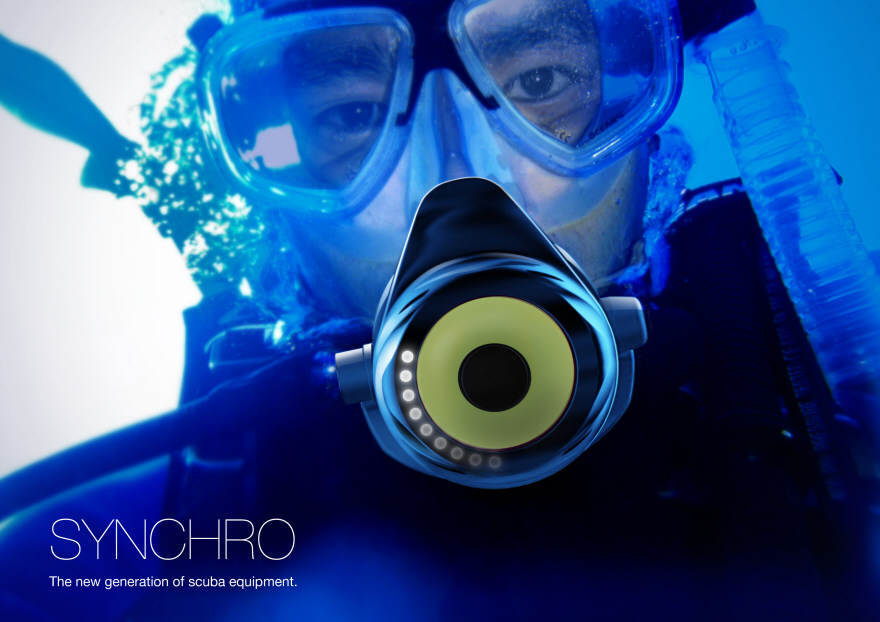 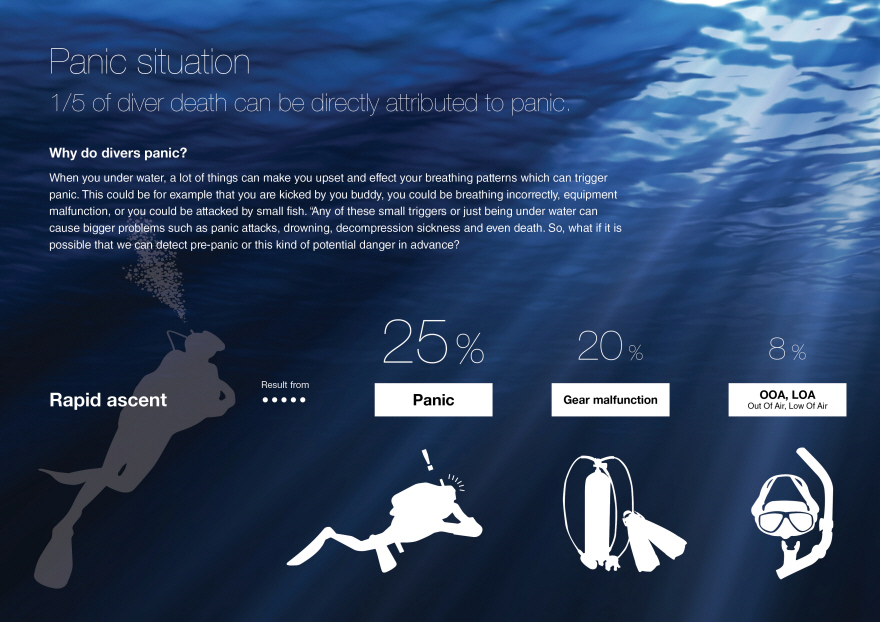 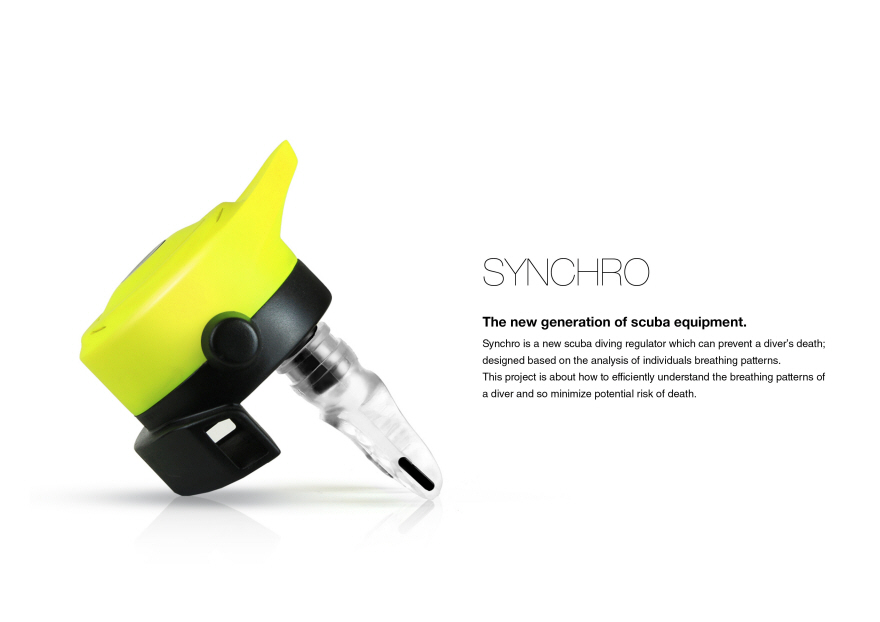 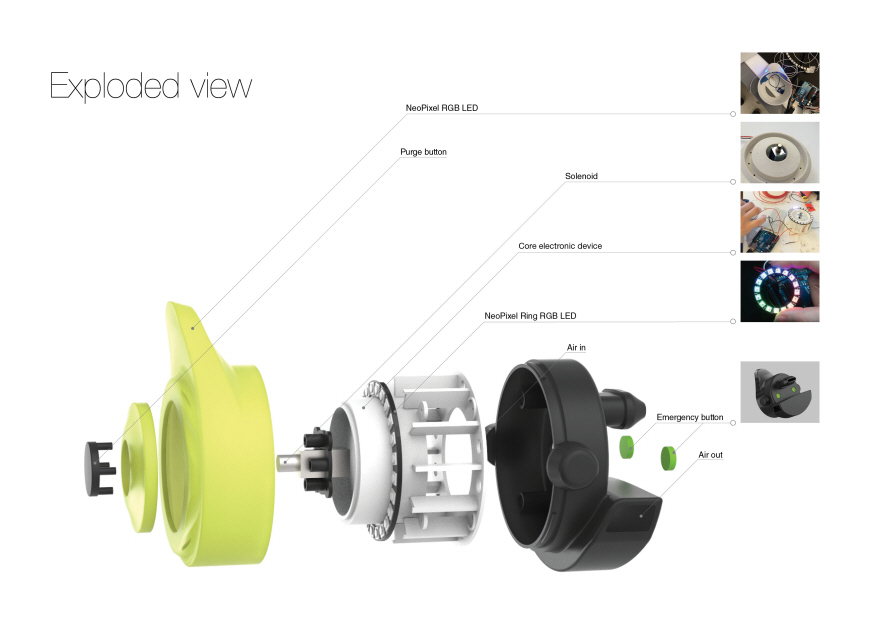 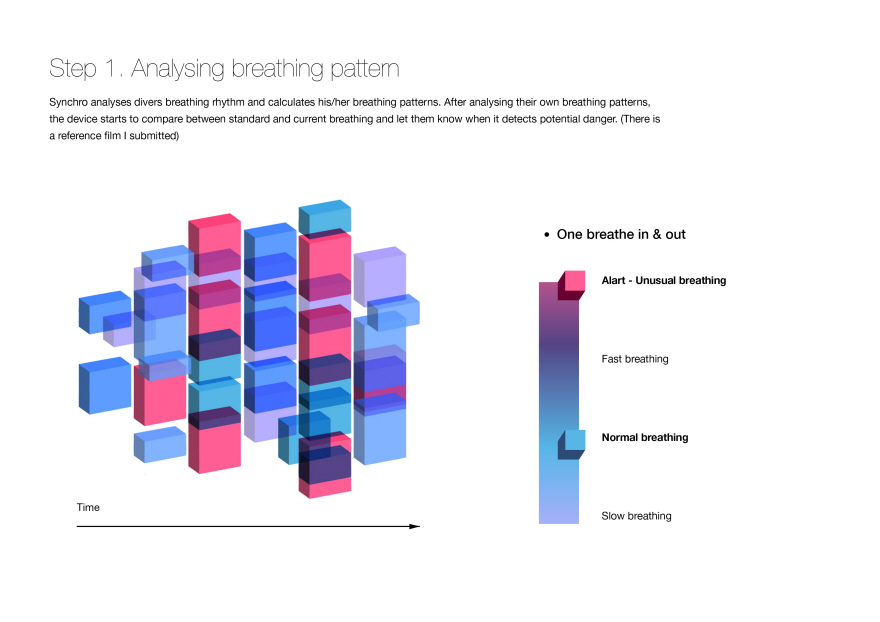 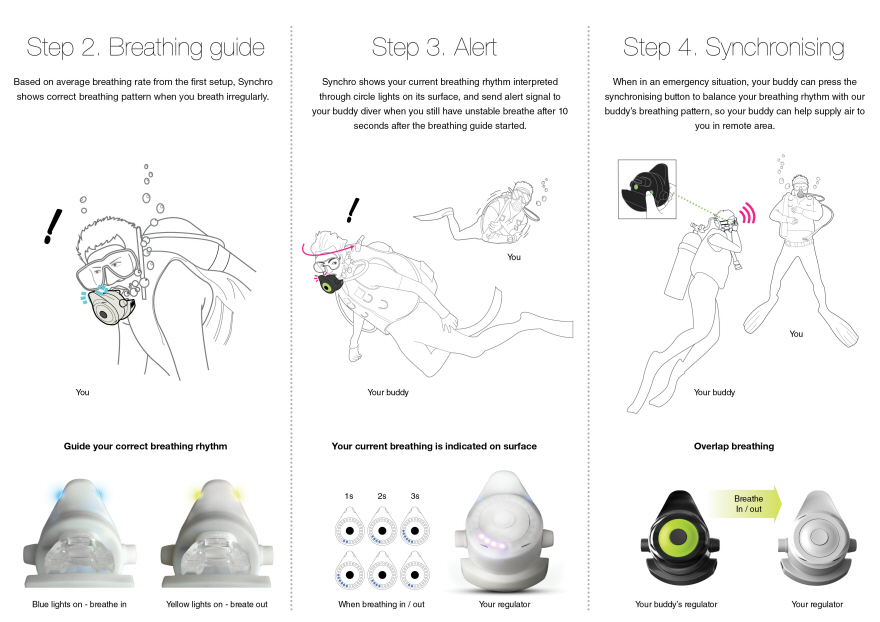 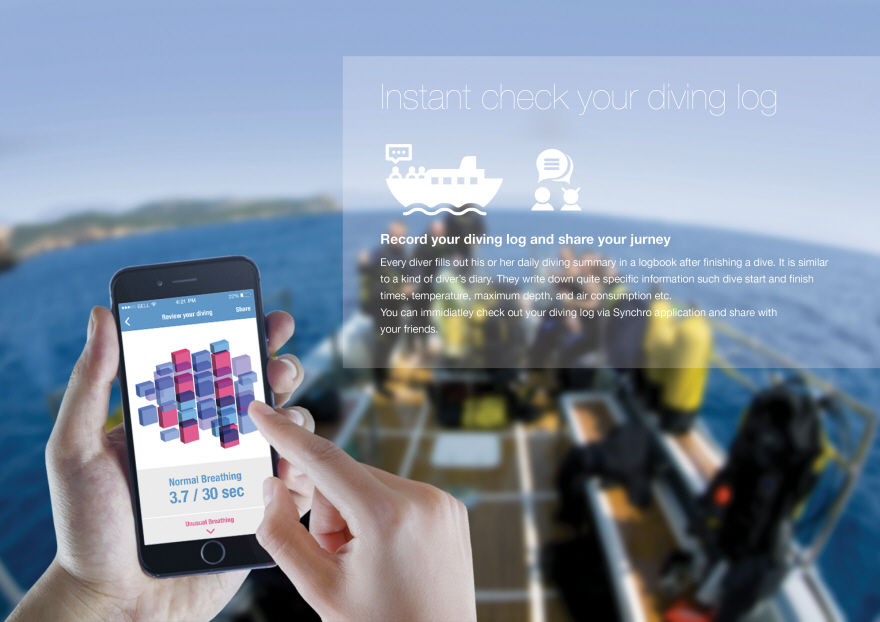 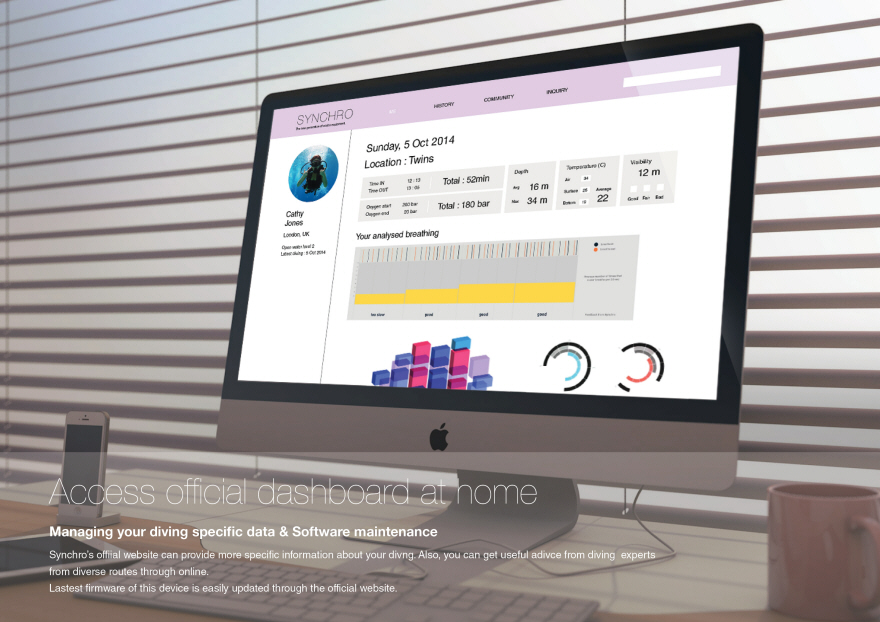 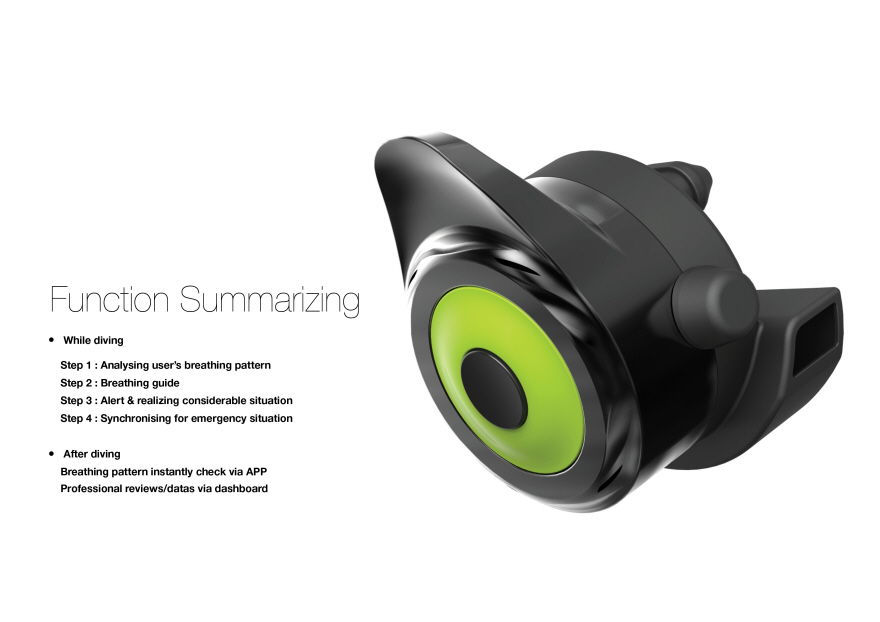 This project is about how to efficiently prevent divers' deaths through a consideration of the relevant factors and a redesign of scuba equipment. Every year, many incidents related to underwater activity have been happening. Among them, the statistic of casualties regarding scuba diver's deaths is indicated as 0.03% out of 50 million divers.
It has been more than 70 years since the recreational dive was appeared. However, the number of casualties and fatalities has not been dramatically decreased when you compare it to the technological development. Every year, cutting edge scuba equipment has come out but nobody can be sure that it can guarantee your safe leisure activity. Actually, when you see the incident data, you can clearly see the number of fatality has only slightly decreased over the last decade.
There are a number of unexpected situations that can occur when you have an experience to explore submarine areas. In particular, panic attack or panic disorder is quite a common situation in our real life. Even when you have a presentation in front of a client, you might get into a slight panic. Or sometimes when panic is serious, you cannot control yourself and you might need someone's help. There are a few prescriptions or descriptions around to help us deal with panic in various situations. For example, we can call an ambulance when it is serious, and we can ask others to help us. However, what about underwater situations? Imagine that you are stuck in an unexpected situation and feel anxious about the uncertainty of the underwater environment. What would you do to overcome it?

There is a unique system for scuba divers to prevent small or big problems. It is called the buddy system. Buddy diving is the use of the buddy system by scuba divers and is a set of safety procedures that are intended to improve divers' chances of avoiding or surviving accidents in or under water by diving in a group of two or three divers. When using the buddy system, the group dives together and everyone co-operates with each other, so that they can help or rescue each other in the event of an emergency.

Preventing diver's death through searching for relevant factors in order to redesign scuba equipment. Finding effective ways to make divers calm down, if they get into a panic due to inexperience in scuba diving. To suggest efficient new equipment for preventing panic situations which can provide new ways of educating in the diver training process. The main purpose of this project is not only to save life but also to encourage scuba diving beginners to overcome their fear and anxiety to allow them to enjoy underwater activity.
This project aims to analyze divers' breathing patterns and so give feedback to them during the dive to prevent serious potential incidents and it also makes it easier to get synchronized with their buddy's breathing, in time of emergency.

My solution for preventing diver's death started from an analysis of individual breathing patterns. And the analysed pattern will be applied to diverse situations. Basically, the main concept of this design is to give feedback to divers to let them know their current condition as comparing with standard and current breath patterns. There are four basic steps as a solution for preventing potential danger underwater area.

First of all, Synchro analyses divers breathing rhythm and calculates his/her breathing patterns. After analyzing their own breathing patterns, the device starts to constantly compare between standard and current breathing and let them know when it detects potential danger.

For the second step, Based on average breathing rate from the first setup, Synchro shows correct breathing pattern when you breathe irregularly. For example, when the device starts to indicate blue and yellow lights on the horn of the Synchro, it means you should inhale when the blue light on and exhale when the yellow light on. This pattern shows when your breathing is unstable, and disappears when your standard respiration is recovered.

The third step is alert stage. Synchro shows your current breathing rhythm interpreted through circle lights on its surface to be seen by your buddy, and send alert signal automatically to your buddy diver when you still have unstable breathe after 30 seconds after the breathing guide started. Or, the device can also send alert signal when your breathing pattern is drastically changed.

To explain more specifically of this stage, the panicked diver must be very confused so they sometimes can't breath well even though they have the regulator in their mouth. After that, the panicked diver starts to drink salt water and it makes them panic even more. This makes them violent wriggle but the normal diver can't release his buddy's legs. He has to wait until his buddy gets exhausted, and then he can supply air through pushing the 'purge' button in the middle of the regulator's outer surface to his panicked buddy. The purge button is the part of a diving regulator that may be depressed manually to force the regulator to deliver air. This is either a separate part mounted on the front cover or the cover may be made flexible and serves as the purge button. Of course it would be wonderful if the diver, who got a panic attack, can stop it before he or she loses their reason, but any unexpected situation can happen in an underwater environment which is unfamiliar. Thus, we need to prepare for every potential danger that can lead to death, especially in relation to air supply.

Therefore, this stage is only for the extreme situations, such as those mentioned above. This shows more forcibility than the first synchronised method of air breathing. This is the handling method to cope with extreme scenarios. First of all, when your buddy has a panic attack, cannot breathe well, and so tries to ascend rapidly to the surface, you operate the trigger for forced synchronising. Then, your regulator and buddy's one are synced as one device. After that, if one of you pulls the trigger, the purge button is moved exactly the same with the person's one who generates it first. Thus, you and your buddy can have exactlythe same breathing pattern while this system is operating. It has the advantage that, during the emergency situation, you can have relatively free hands because you don't need to push your buddy's purge button with your own hand. Rather than this, you can stop your friends' soaring and supply air simultaneously. It is good for your buddy as well as you because you can deal with both problems at once, and so can concentrate on only the one task, which is that of preventing rapid ascent.
Every diver fills out his or her daily diving summary in a logbook after finishing a dive. It is similar to a kind of diver's diary. They write down quite specific information such dive start and finish times, temperature, maximum depth, visibility, objective, and observations of animals, etc. What I suggest is to add breathing patterns to the logbook contents so they can see their diving story more specifically.

There are a lot of sports/leisure products related to monitoring the user's condition and giving feedback. Nowadays, the more people want specific data of their exercise and life pattern, the more devices are needed for satisfying users. My device is designed for users who have the same kinds of requirements.

One of the most important things in designing products is target setting. Thus, what kind of people can be users of this product? Some people, who have interest in their systematic exercise and well-being, might need this product. But apart for them, we can expect many potential users. First of all, beginner divers such as taste or open water divers who are unfamiliar with the uncertain underwater world could be our users. This device allows new divers to feel more comfortable since they remind the user that they are constantly being monitored by someone – whether their buddy and/or the control tower – and that faith allows the user to be more confident. Secondly, instructors also need it because the people who they are teaching are mostly beginners or are unaccustomed to diving. Thus, naturally instructors need it for their student's safety. The next target users would be those who have difficulty in breathing in underwater or who have a fear of water, for some reason.