Harvest is an instantiation of my thesis entitled “Hacking the Orchestra of Life: A Movement for Capturing Ambient Energy.” It explores the space of energy generation through human-made sources. The global population is increasing dramatically. By 2050, the world’s population will increase from 7.1 billion to 9.6 billion according to the United Nations. And fifty percent more energy must be produced to meet this demand, as every person on earth consumes energy. However, everything that lives also moves. For example, while jogging on a treadmill at the gym one day, I looked at the landscape of people bobbing up and down on machines. I thought, “We were all exerting a huge amount of physical energy, and consuming a vast amount of electrical energy as well.” As a designer I’m always thinking of ways to improve things, and I thought “how can we take advantage of all of this activity?” This led me to ambient energy harvesting, or the process of obtaining usable energy from natural or human-made sources that surround us in the everyday environment. I used this ideal to frame my body of work to realize meaningful change through reframing people’s perception of energy use and production.

Harvest takes human movement and turns it into quantifiable energy, a little bit at a time. Through footwear, apparel and bicycle accessories, energy is stored to a micro rechargeable lithium-ion battery or a “Harvest Pod.” The user can check his or her energy metrics through the Harvest app. Harvest supplies the energy harvesting technology and partners with footwear, apparel and bicycle companies such as Nike, Lululemon and Trek. The user can upload their energy by visiting “Harvest Hotspots,” such as Nike and Lululemon stores as well as Whole Foods and Starbucks. The Hotspots utilize the existing infrastructure of the Square payment kiosk system and the harvested energy is transferred and stored to a green energy bank. This energy is used locally to help power the store, and once enough energy is accumulated, a Renewable Energy Certificate is created. The certificate is then sold on the energy market and the proceeds are donated to a set of philanthropic and charity organizations, such as The American Red Cross and 1% for the Planet.

A campaign featuring Nike-sponsored athletes reframes the perception of energy, proposing the question “What would you do with the energy of LeBron James?” Put it on a shelf as a collectible, power your iPhone or donate it to a school to keep their lights on?

The value proposition for the partner company is that it is elevates their brand perception, encourages frequent customer visits to stores, promotes purchasing through incentives and creates sponsorship opportunities for races, festivals and charity events. The value proposition for the user is that it promotes an active lifestyle, creates an opportunity to donate generated energy to a charity, offerings for discounts and lotteries, encourages a feeling of belonging to as well as giving back to a community. 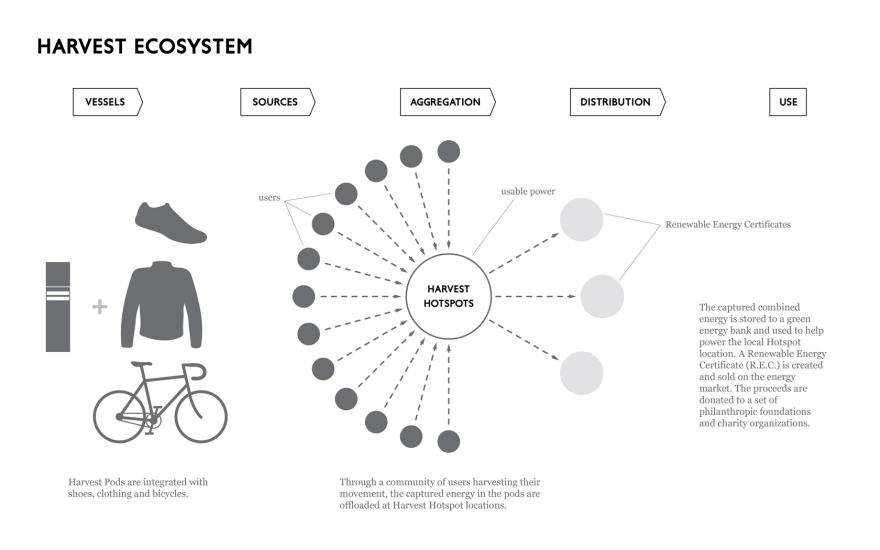 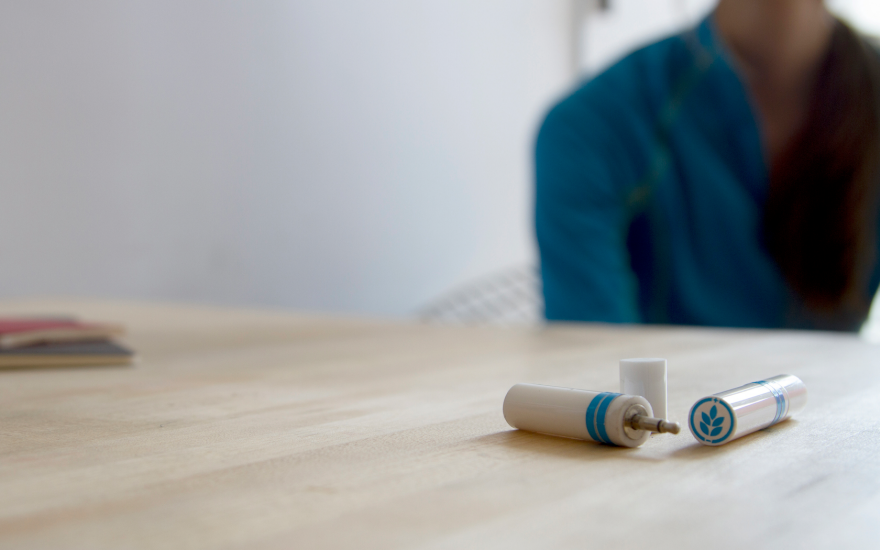 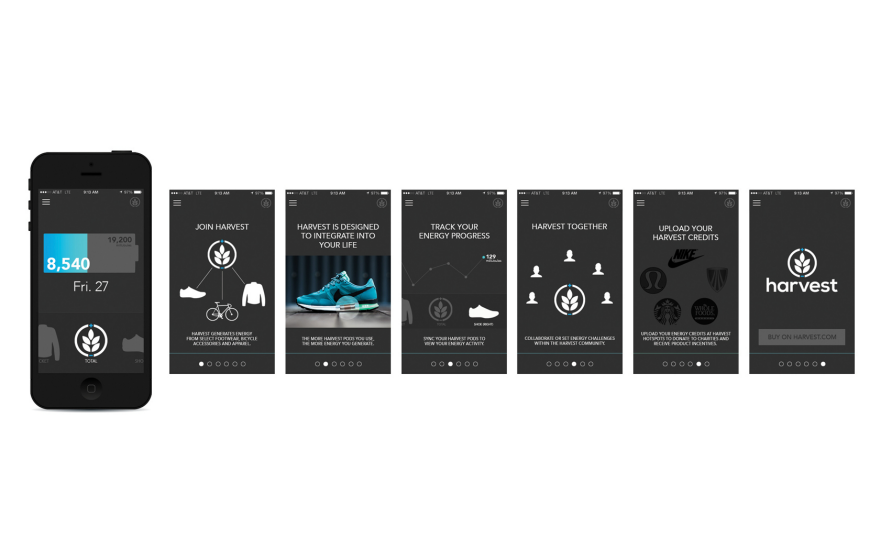 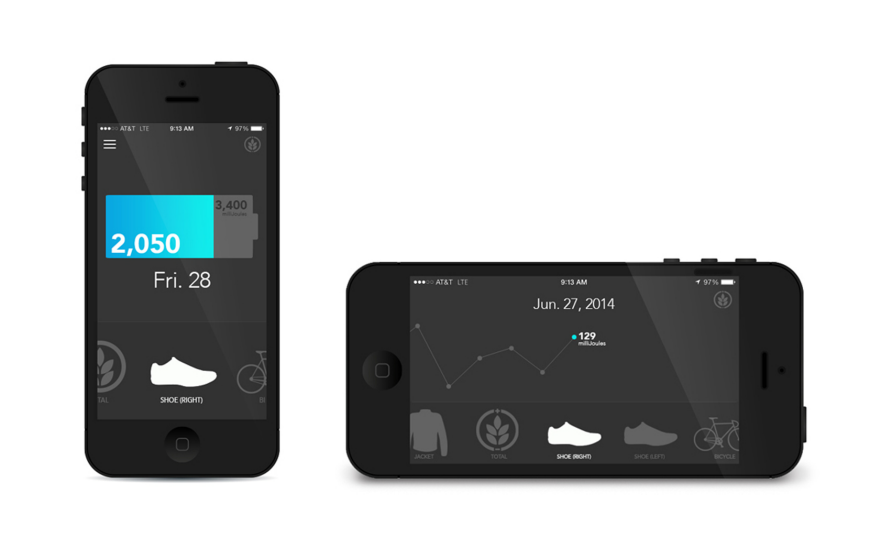 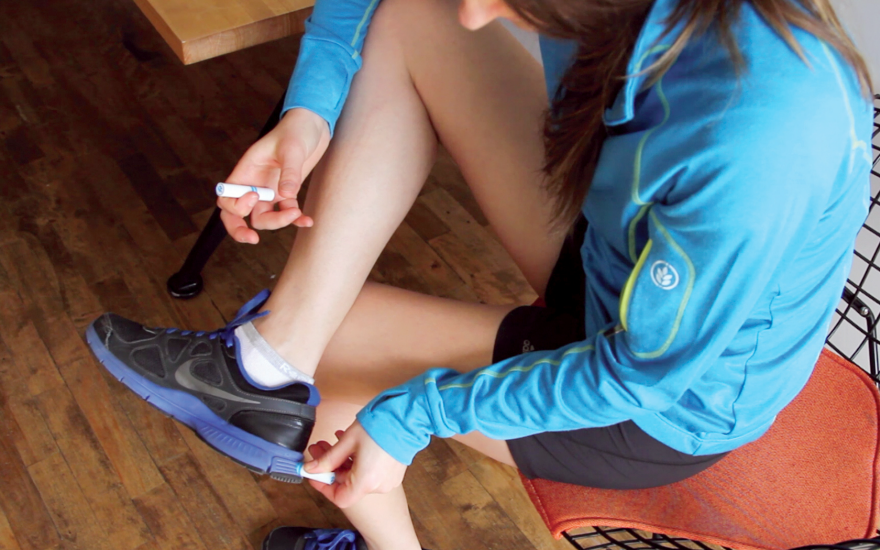 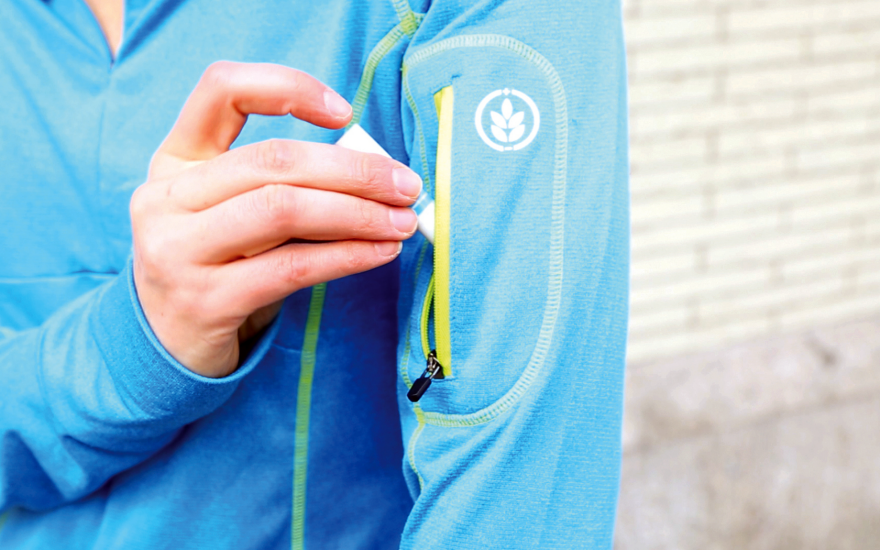 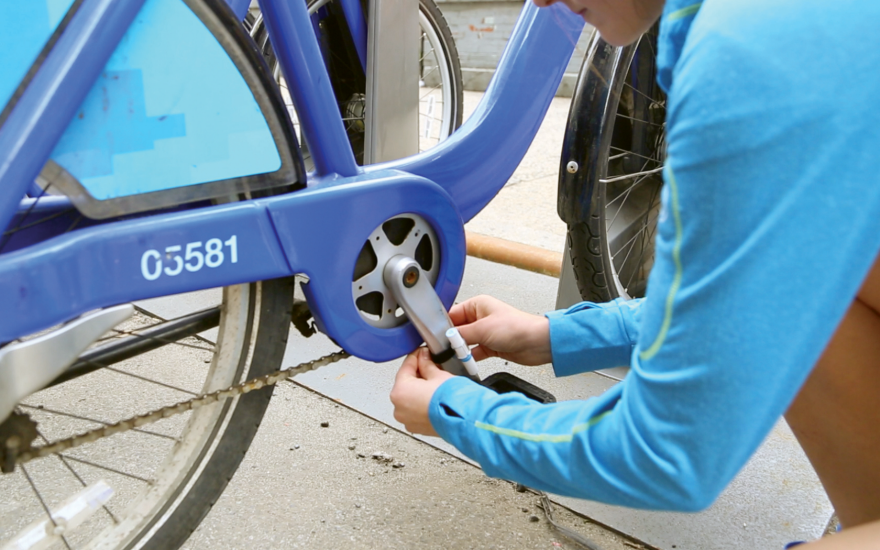 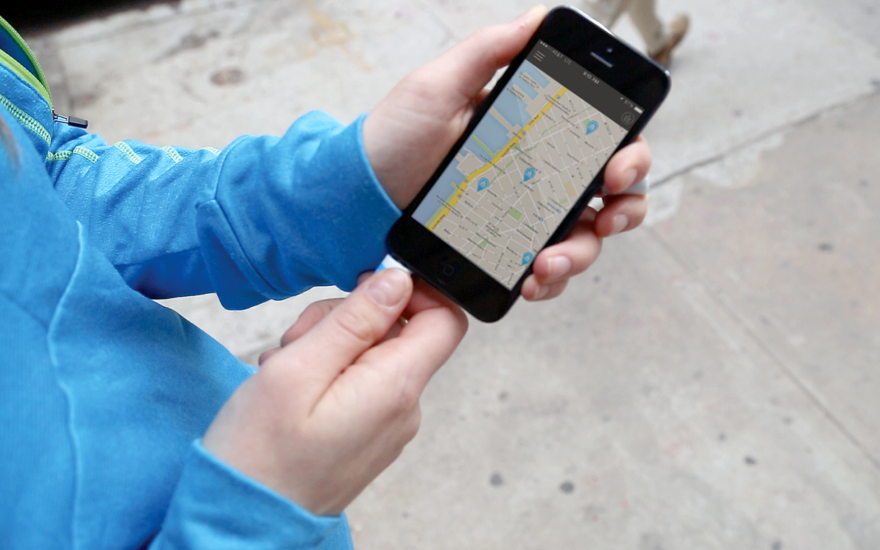 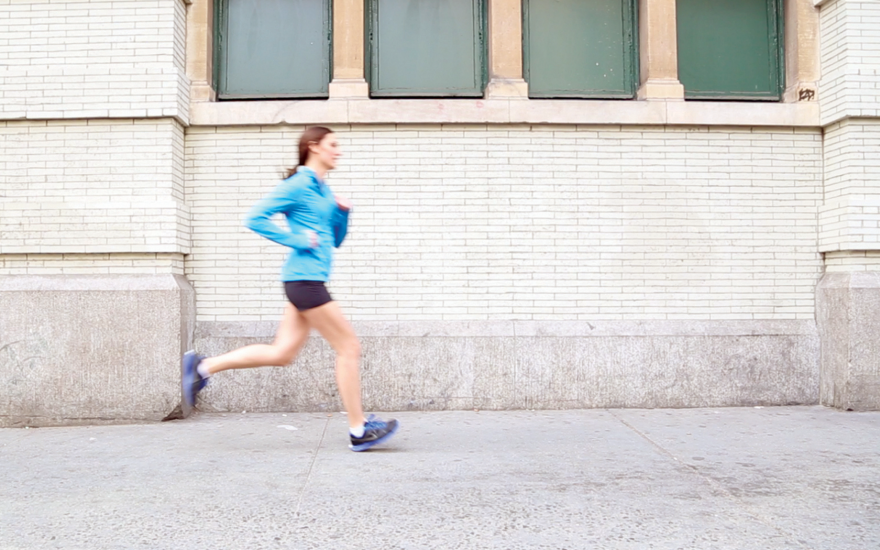 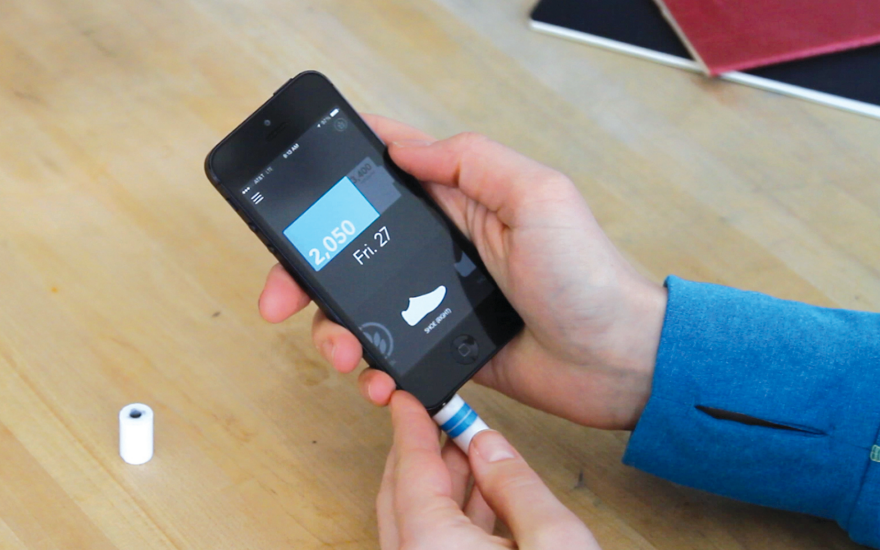 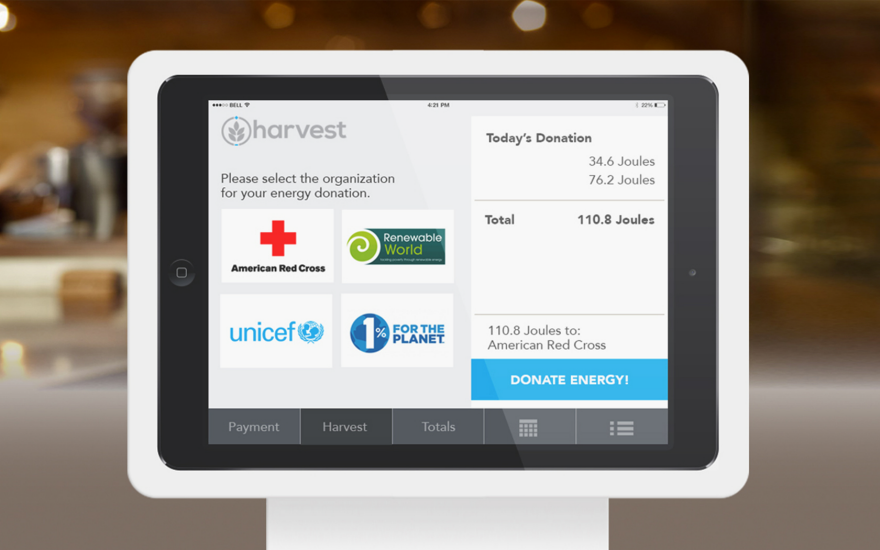 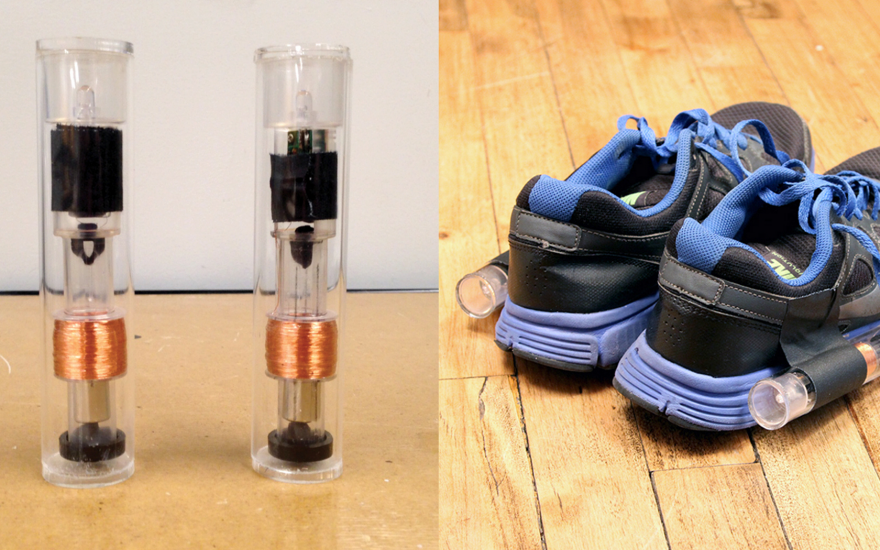 By talking with more than 20 subject matter experts, I gained an appreciation for the complexity of ambient energy harvesting. Basic electrical engineering and electronics books aided me in understanding the essential building blocks of energy use and production. Technical papers and science textbooks helped me apply this understanding. Each research component was crucial to defining, revising and progressing my body of work.

I looked at the small, but growing landscape of existing energy harvesting products, Both real and speculative. As I began ideating, four distinct areas began to emerge: tools, transportation, human movement and animal movement. I looked at activities such as using a shovel or a saw to riding a bicycle to harvest energy. I even imagined a speculative New York City catch and release rat program, in which rats would be embedded with kinetic-powered Wi-Fi transmitters. Giving internet access to all subway riders.

I began doing more in-depth research around physics, electricity and batteries, I referenced a technical paper my thesis advisor, John Kymissis, an electrical engineering professor at Columbia University coauthored on energy harvesting. His team placed accelerometers in the shirt pockets of 40 participants while running for 20 seconds and received a median reading of about 813 microwatts or about 0.0000407 Joule. To put that in context, it would take about 16.5 minutes of running to power an LED for 10 seconds. That didn’t sound very promising.

I decided to try it myself but using a different method involving electromagnetic harvesting. Through disassembling shake flashlights and attaching the components to shoes, I estimated 0.05 Joule per step. Which was better, but the amounts were still pretty dismal. I calculated I’d have to walk almost 200 miles to charge my iPhone. However, “Little bits add up to a lot” as Cameron Tonkinwise, Director of Design Studies at Carnegie Mellon, so eloquently stated when I interviewed him. And looking at the opportunity on a macro global scale with billions of people harvesting, little bits DO add up to a lot. I took this idea and design a conceptual product platform and service entitled “Harvest.”

My target audience for Harvest consists of those who are both physically and socially active. They partake in “fun runs” within their community. They are “do-gooders” and receive satisfaction by giving back to a community. Besides walking and running, they may participate in other sports and activities. They enjoy being part of a club that encourages physical fitness and social networks. They are part of the ‘quantified self’ movement, and are avid users of activity trackers such as Nike+, Fitbit and Jawbone UP.

This demographic is also concerned about the environment and their impact on it. They are conscious of their consumption habits. They bring reusable bags to the grocery store. They walk, bike or use public transportation. They are believers in hybrid and electric cars, solar and wind technology and recycling. Global demographics include both men and women, Gen Xers and Millennials in industrialized countries. Highly populated urban settings with vast amounts of movement, heat, light and sound are rich sources of ambient energy.

The general public is beginning to be much more aware of the detrimental effects of greenhouse gases, such as carbon dioxide, which are produced by the large amount of automobiles on the road. This is one reason why hybrid electric vehicles are now surpassing innovators and early adopters on the adoption curve. The adoption curve, or diffusions of innovation, is a theory that describes the rate at which new technologies and ideas are accepted among cultures. Hybrid sales in the US surpassed the 3 million mark in October 2013, and total global sales are expected to rise 67% in 2014. This increase has been facilitated by tighter emission standards, especially in Europe.

Once energy harvesting is accepted on a national scale in industrialized countries, it has the potential to address issues on a global scale. A secondary audience is of energy-poor citizens in developing countries. According to a report conducted by the International Energy Agency and the World Bank, almost one fifth of the world’s population is without electricity. Experts predict that the gap will not be closed within the next 20 years unless a great amount of financial backing and effort is applied. The rate at which traditional electricity systems are being implemented is slower than global population growth. Yet potential harvesting sources do exist in the developing world. We cannot afford to not take advantage of this technology, especially when population growth is increasing faster than traditional energy systems are being implemented.

Taking the concept of Harvest and applying it to other facets of movement, anything that moves can be a source for energy. It’s only a matter of time for science to catch up to design. I plan to continue exploring, thinking, making and designing within the field of energy harvesting. There is an immediate need for new green energy. It is possible to realize meaningful change through reframing our perception of energy use and production.