The FLIR Griffin G510 is a portable chemical detection device used in the field or the hot zone of a disaster area to quickly sample and identify a potential threat in any phase: solid, liquid or vapor. The G510 is essentially a mobile lab, using gas chromatography/mass spectrometry (GC/MS) to identify narcotics, explosives, chemical agents and environmental contaminants in a wide variety of scenarios so emergency responders, environmental teams or government agencies can take immediate action. 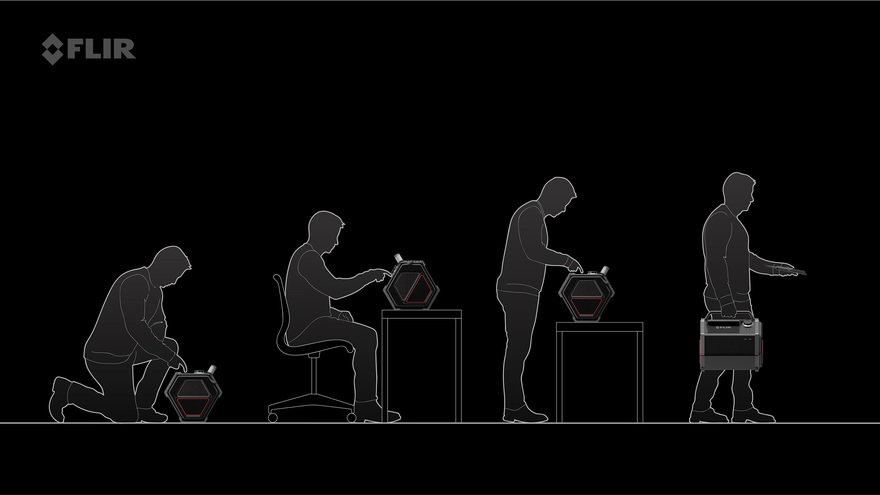 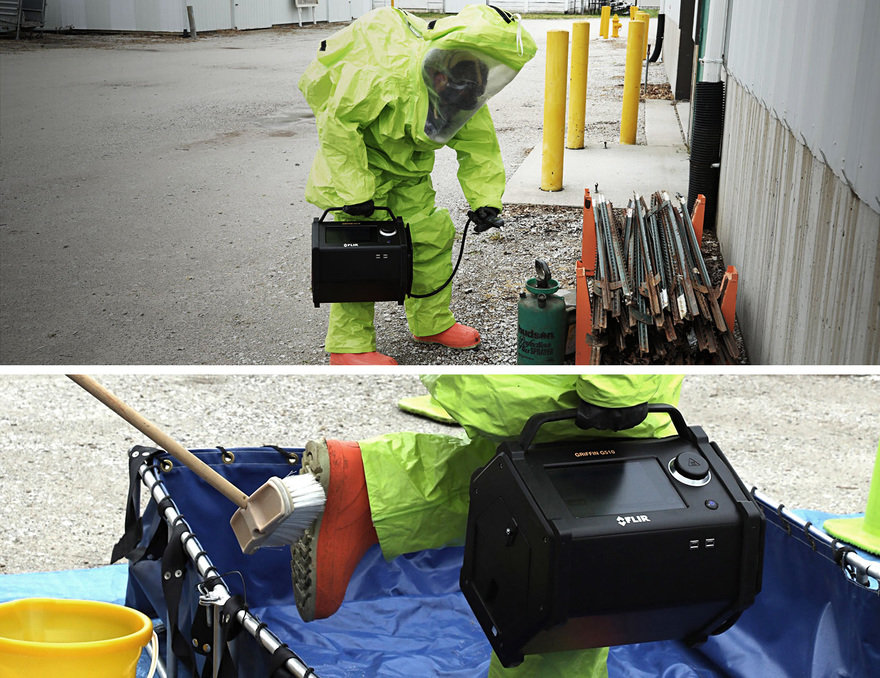 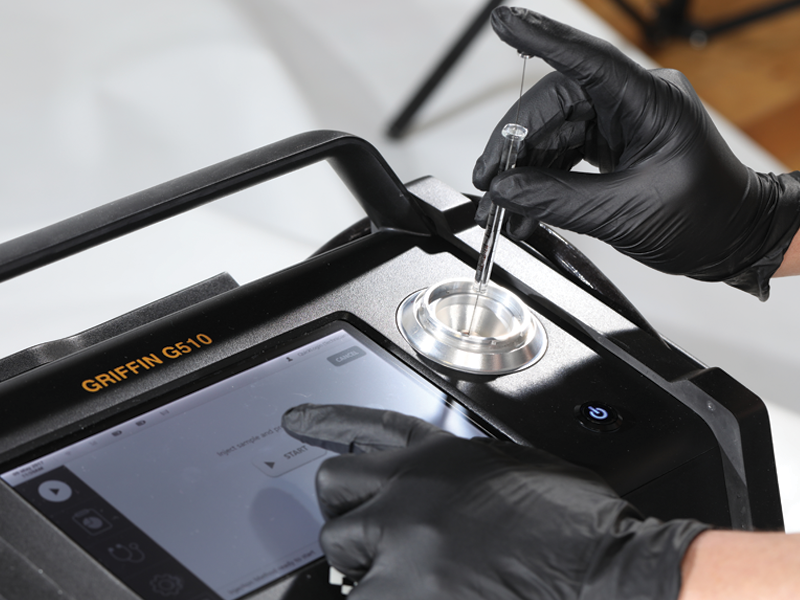 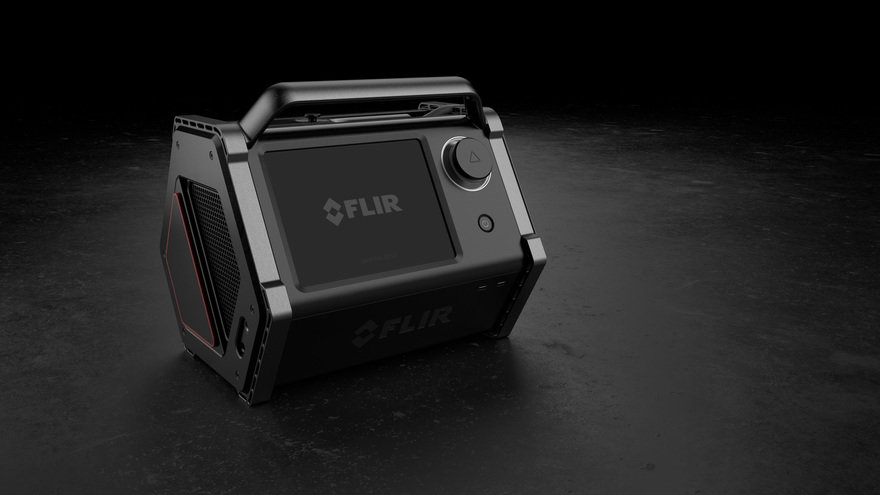 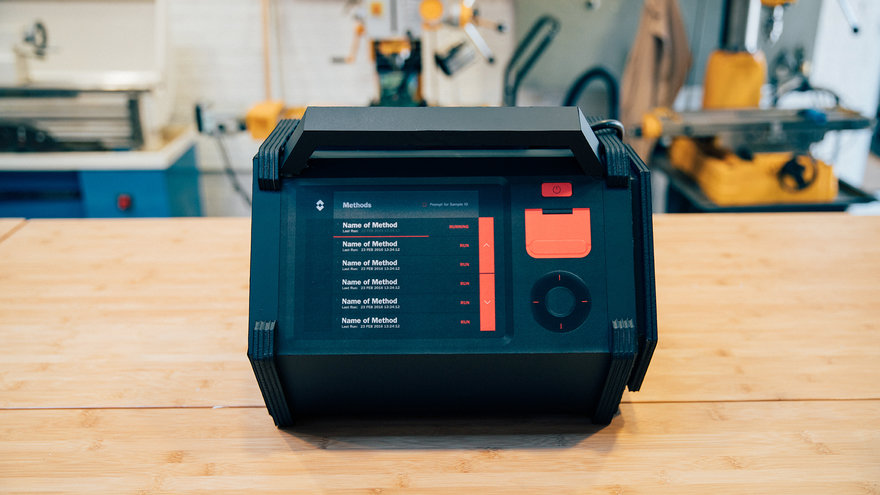 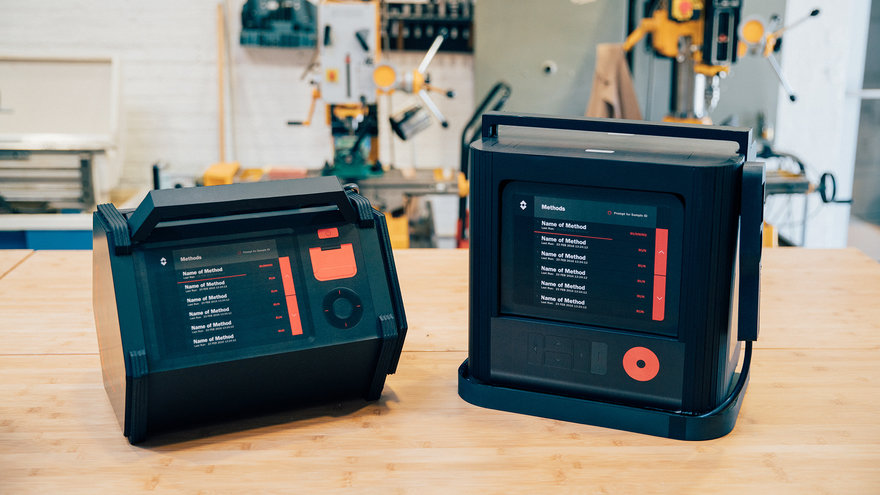 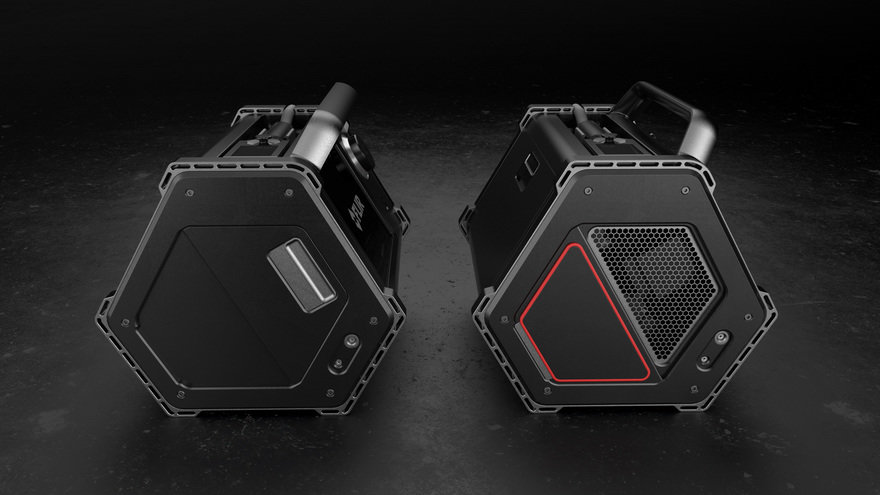 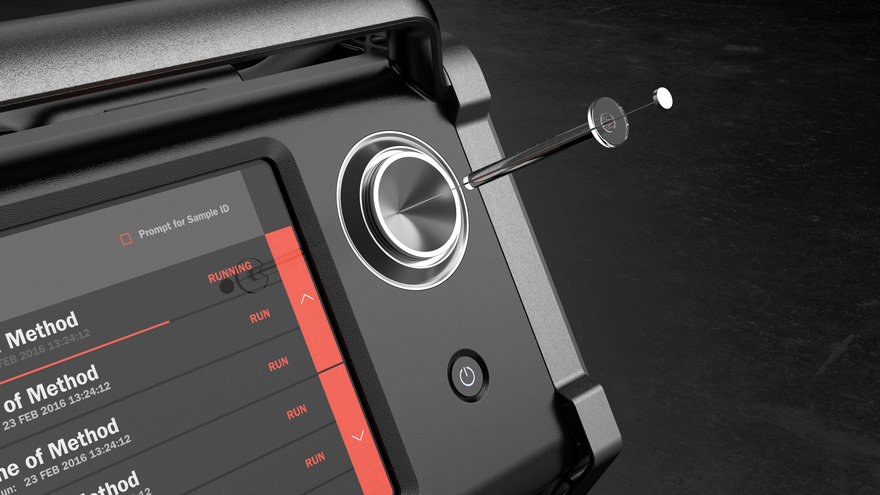 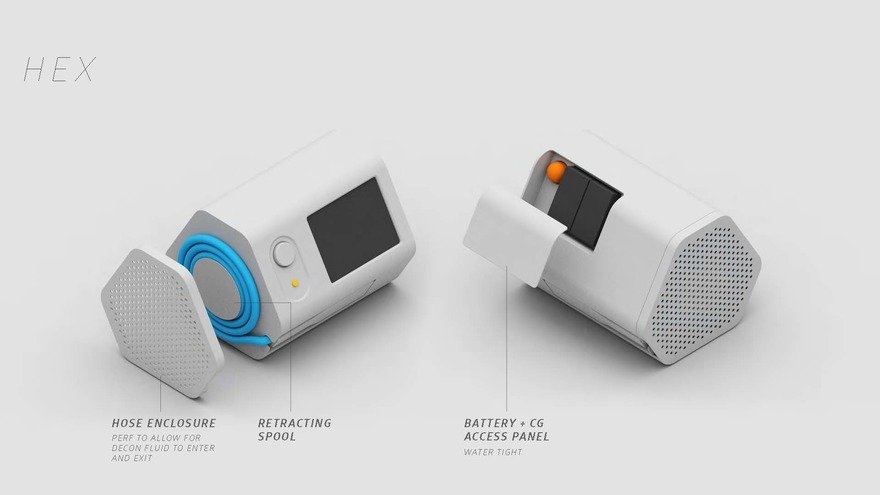 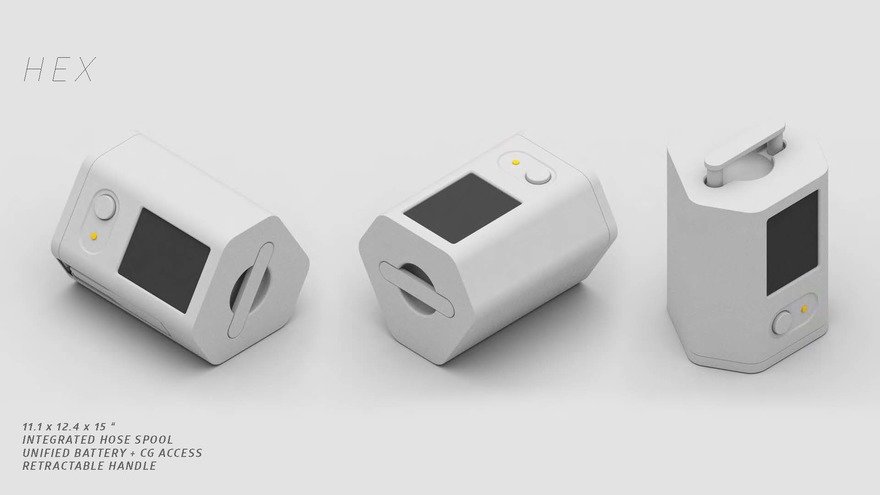 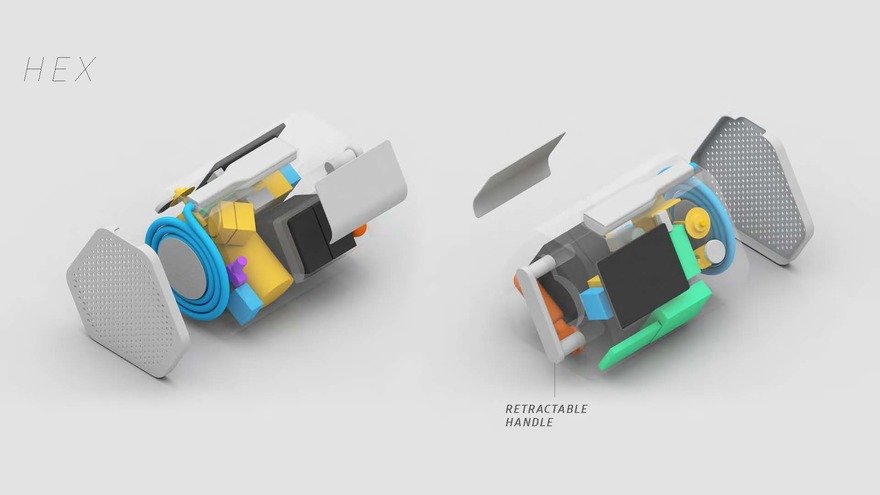 Background
Most consumers know FLIR for their range of excellent thermal and IR cameras. They make many products for professionals and consumers and are a well-respected market leader in this category. The Griffin G510 is under the FLIR Detection group which makes highly specialized CBRNE (chemical, biological, radiological, narcotics, explosives) detection equipment that is primarily sold to commercial, industrial and government agencies. Examples:


Because of the nature of its customers, these products are often designed entirely by science and engineering teams that focus on achieving the required functional specs. This product category is rarely, if ever, touched by industrial designers, leaving a void where a visually distinct and user-centric product can become the icon of the industry. This opportunity inspired the design team to create that icon.

Challenges
To quickly identify a wide range of chemical threats, the G510 must be hand carried into the field, into natural and manmade disasters like war zones or chemical spills and must also be used in safe environments like a lab. The multi-use scenario created an ergonomic challenge.

The form needed to:
- be easy to carry and operate for long periods of time
- be versatile so it could be used in improvised emergency scenarios where a proper work environment is not available. Ex: A user crouching down while the unit is on the ground or standing while the unit is set on a found object like a barrier wall.
- work while sitting down in a lab scenario.

The form exploration was further complicated by an interrelated set of electro-mechanical and thermal components (the miniaturized lab) that were limited in how they could be reconfigured. This affected the range of potential forms and how they balanced in the hand. Finding a configuration that was mechanically sound, ergonomically sound, supported multiple use scenarios, etc., was a significant challenge and one the design team tackled at the beginning of the project.

The device also needed to be sealed when down range so internal components were never exposed to contaminants in a hot zone, and the exterior could be easily decontaminated after use by a spray down. The design team conducted an exhaustive mechanical study to find the best sealing method. The solution had to be easy to understand and operate, create a consistent seal and be extremely obvious when the device was sealed or open, as to prevent accidental contamination by a distracted user in an emergency.

A requirement in hazardous environments, the G510 was specially designed to be used while wearing personal protection equipment (PPE) like a hazmat suit. To prepare for this, designers suited up in full hazmat gear, including hoods and gloves, to experience the limited dexterity and vision of some end users. This new-found empathy steered the team towards larger dimensions in key areas, like robust handle geometry, and away from small or delicate interaction areas throughout the device.

This idea was extended to the storage of the probe, a handheld device that continuously sniffs air giving near real-time chemical analysis. A large diameter hose wrap placed at one end of the hex makes it easy to store the stiff probe hose and the low-profile design keeps it clear of other interaction areas.

The Hex Design
Competitive products in the detection category are usually briefcase style boxes designed by engineering teams and focus on function, with little or no consideration for appropriate visual design and sometimes usability and ergonomics. The competitive landscape motivated the team to find a new configuration and a compelling visual language. The hex design was that solution. By rotating the hex, users can orient the screen at a high angle similar to a monitor, perfect for seated use. Tip it back, and the display orients straight up, great for standing use at a bench or on the ground. Pick it up by the handle and it balances with the display at an upward angle, allowing users to see the display while using the air sniffing probe with their other hand. This functionality combined with the strong visual of the hex design is entirely unique and quickly becoming an icon in the detection industry.

Sealed operation allows the unit to run down range long enough sample and run analysis before requiring a battery swap or the temperature inside the unit becomes an issue. Seals are located on the ends of the hex and angular panels swing open to expose a visually strong vent pattern and a bright red seal. These affordances act as safety measures, indicating the unit is open and exposed. The open mode allows continuous use in a lab setting. 360-degree bumpers at the ends of the hex lift the unit slightly, protecting the UI and giving the design the rugged, industrial feel desired by its customers.

Users
Chemical detection teams in government agencies and private companies can change rapidly, so it was important to reduce the training time and the minimum skill level required to operate the unit. The large, intuitive touchscreen interface lowered the barrier to entry. Users don't need a background in chemistry or experience in a lab environment to use the G510. After only 2 hours of training, users can operate the device, after 8 hours they can be certified.

Client
Considering the iconic visual of the Hex design and the superior functionality it provides, the science and engineering team at FLIR quickly embraced the design. The product launched in 2017 and customers have responded with early sales significantly beyond FLIR's expectations. With long sales and product life cycles (sometimes in the decades) it may be years before the true impact is seen in the market.

The strong market response has convinced management in the FLIR detection group of the value of design, attributing the early success to many of the advances made by the design team.


Manufacturing
Devices of this type have low production volumes, with annual units sold often in the hundreds. It was important for the design team to work within FLIR's existing manufacturing processes and the requirement for domestic production, which is crucial for a device of this type. Working with these constraints lowered the overall complexity, reduced tooling costs and got the client to market faster and with fewer challenges along the way.

Social and Environmental Benefits
By quickly detecting chemical threats or environmental contamination of all kinds, the G510 allows response teams to act quicker, keeping people safe and the environment clean. The portable design can get down range quickly, and its ability to quickly identify chemicals threats in any phase solid, liquid or vapor gives it the unique ability to respond to virtually any threat including explosives, chemical warfare agents (CWAs) like sarin, toxic industrial chemicals (TICs) like chlorine or ammonia, narcotics, and a wide range of environmental pollutants.

Simply put, the G510 saves lives and the environment. In combat scenarios it identifies trace amounts of explosives and chemical warfare agents in areas classified as hot zones. In civilian scenarios it monitors the environment around industrial areas for leaks or other forms of hazardous waste in addition to responding in natural disasters or other catastrophes.