SPEEDTRAP™ Graft Preparation System offers an innovative solution for preparing soft tissue grafts in orthopedic procedures. The unique needleless design is strong, fast, and easy to use, reducing graft preparation time by 77%, compared to standard techniques. The suture uses a fingertrap technique to compress rather than pierce the graft.

o Easy – SPEEDTRAP System's intuitive design simplifies graft preparation for PAs, scrub nurses, or surgeons who do their own graft preparation. The design easily deploys whipstitches on the graft with a simple pull of the suture tails.

• Reproducible – The system reliably delivers even distribution and uniform pattern of whipstitches to ensure tubularization of the graft for easy passage through the bone tunnel. 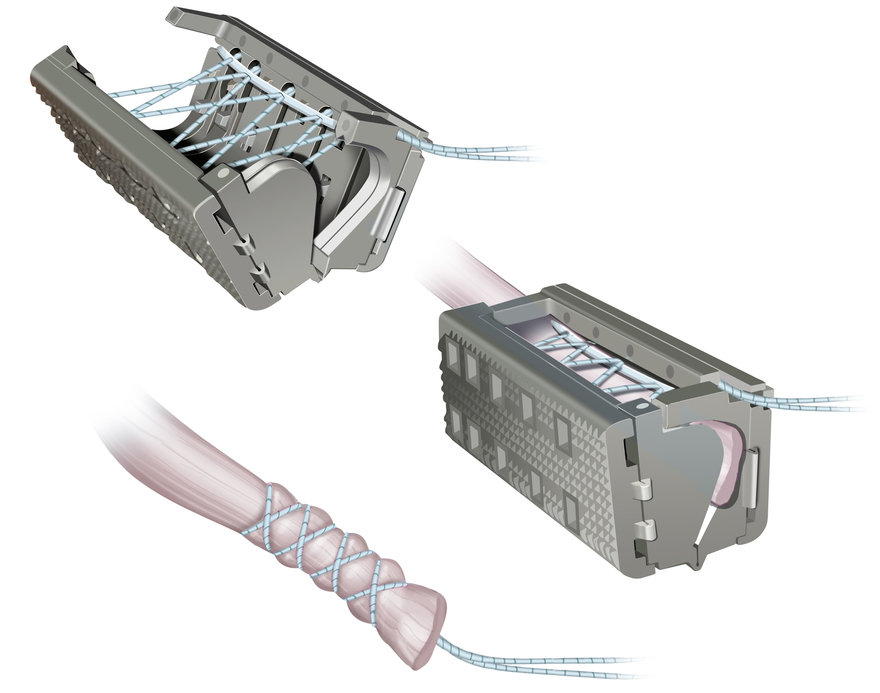 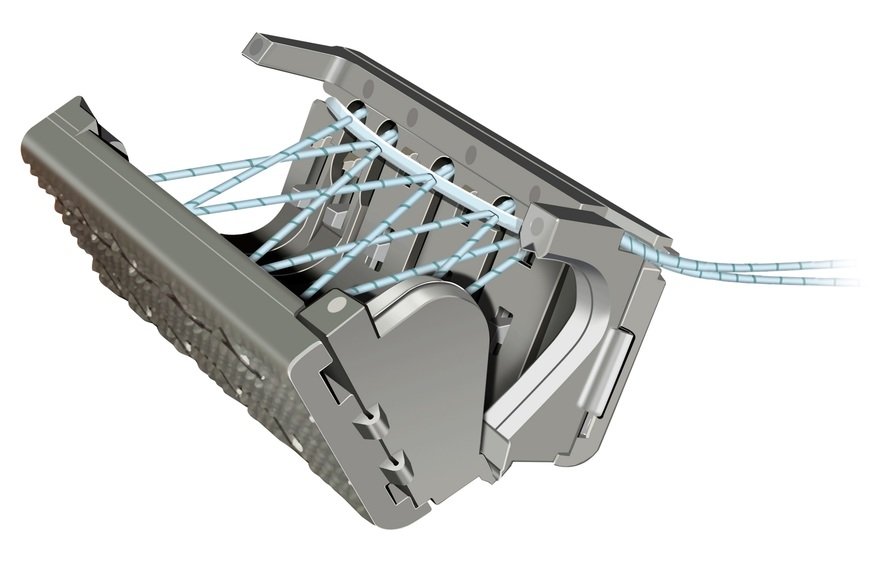 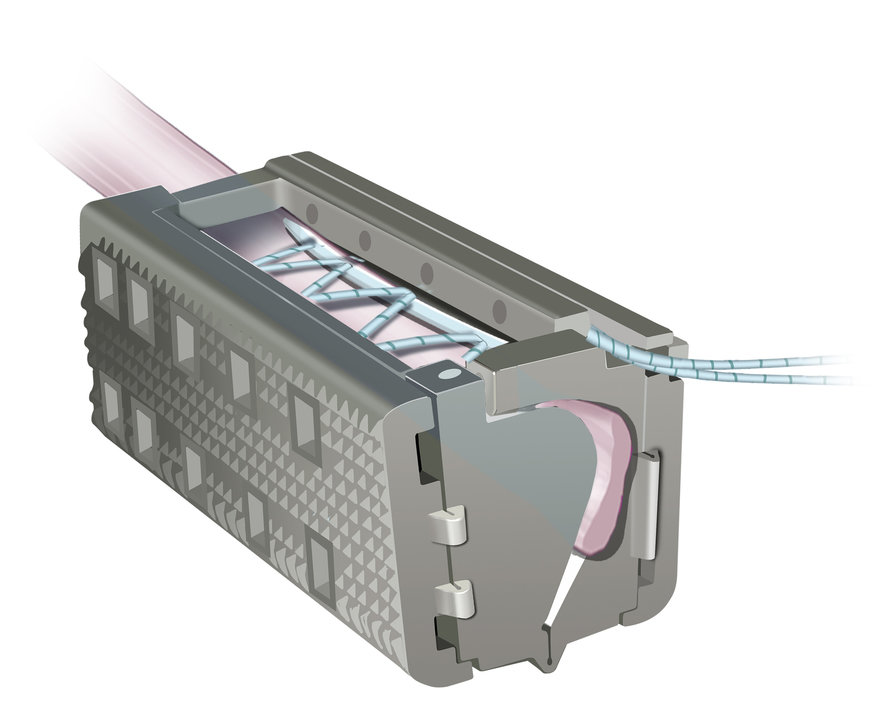 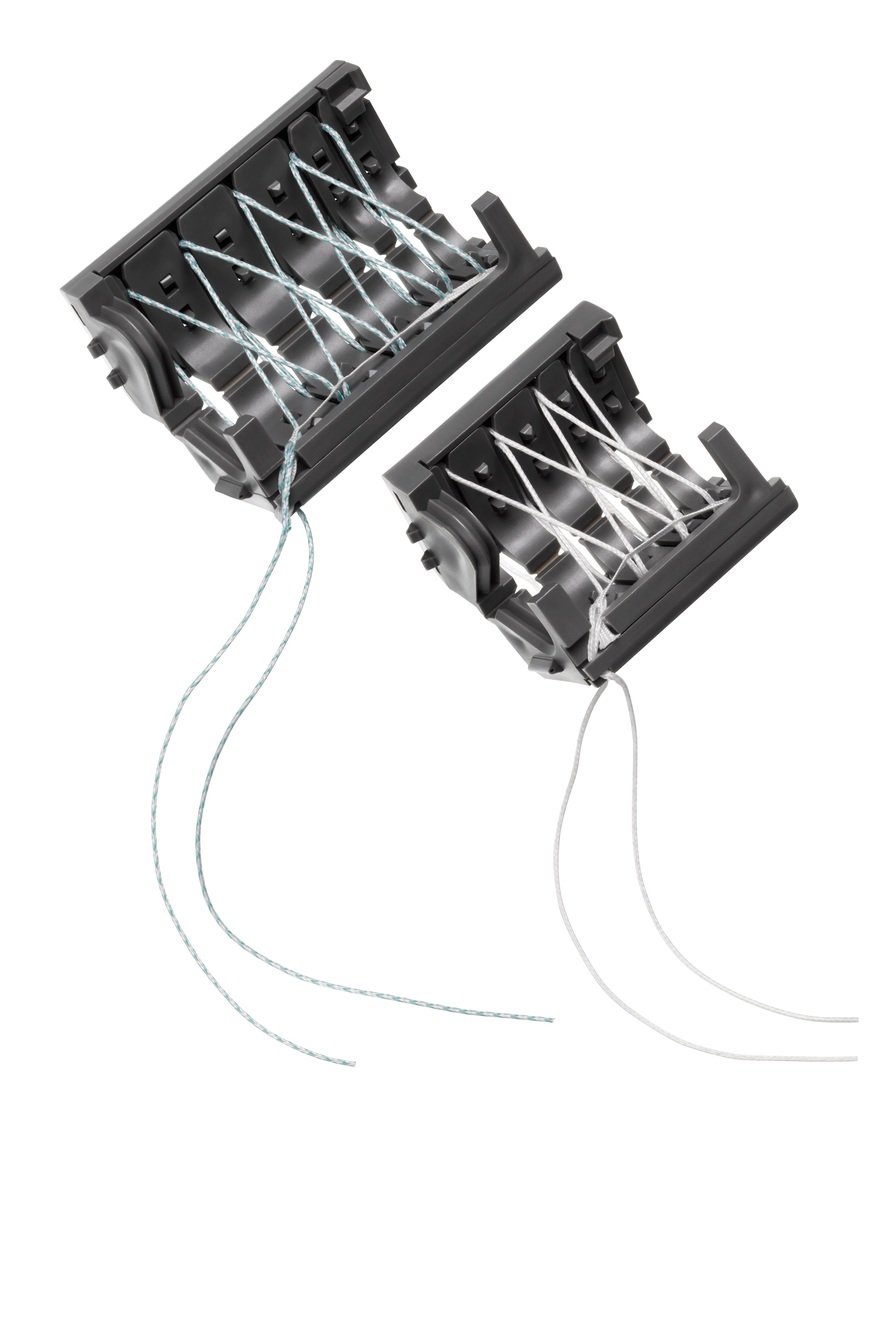 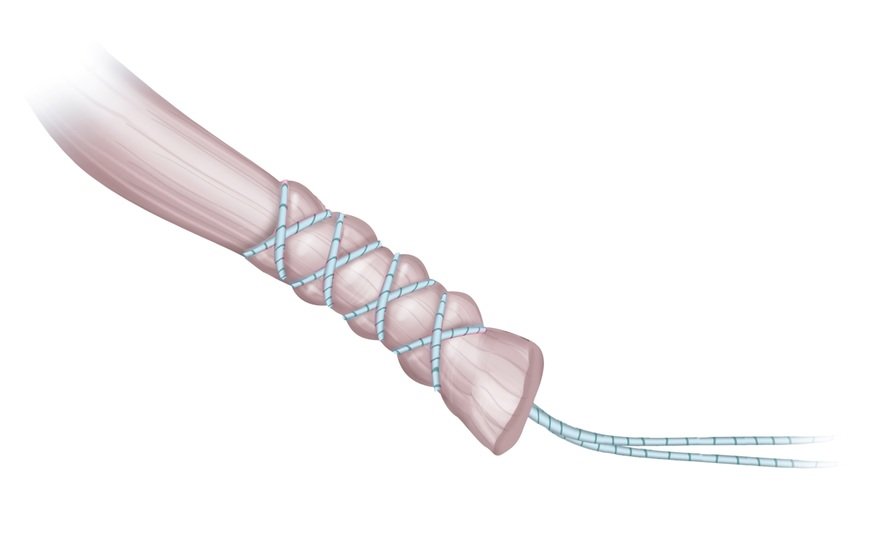 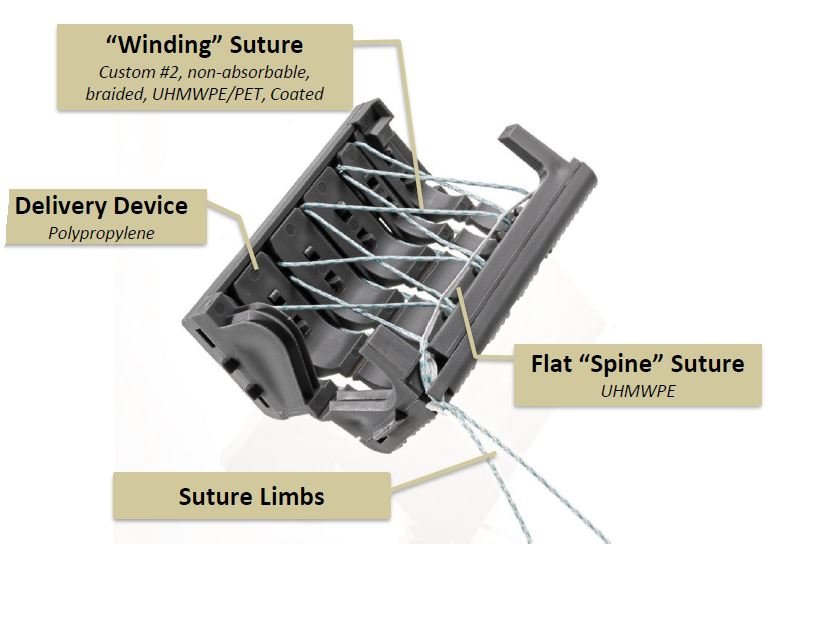 Repair or reconstruction of damaged ligaments, such as the ACL, PCL, collateral ligament, or medial patellofemoral ligament, are some of the most frequent orthopedic surgeries in the U.S. In fact, approximately 150,000 ACL reconstruction procedures alone are performed each year1,2. These arthroscopic surgeries frequently use soft tissue grafts. Studies have shown that preparing grafts for use in ACL reconstruction and similar surgeries is an inefficient, time-consuming process1. Whipstitching the ends of tendons is preferred for adequate tensioning of the graft4 but the process can be slow and the needles used can damage the graft or prick surgery staff. SPEEDTRAP™ Graft Preparation System simplifies the soft tissue graft preparation process and allows the user to efficiently prepare grafts for a variety of orthopaedic/sports medicine surgical procedures.

• A more efficient method that can reduce OR time. SPEEDTRAP System reduces graft preparation time by at least 77% compared to traditional whipstitching techniques.1 It takes only 20 seconds, on average, to whipstitch a tendon with SPEEDTRAP System. This is particularly important in ACL reconstruction and similar procedures where 40% of surgery time is dedicated to graft preparation.

• Needleless delivery system that is safer. The innovative design reduces risk of needle stick injuries for the user. This also minimizes potential damage to the graft from needle or suture holes that could weaken it.

• Device that is easy to use and simple to learn. Intuitive design simplifies graft preparation in the OR. The design easily deploys whipstitches on the graft with a simple pull of the suture tails.

• More consistent whipstitches for even distribution and a more uniform pattern. SPEEDTRAP System suture construct compresses the graft rather than piercing it. The system tubularizes the graft to easily pass through bone tunnels and works well even on small, wispy grafts that are less than 3mm.

· SPEEDTRAP System's more efficient graft preparation time could reduce OR procedure time, which could potentially reduce chance of infection. Some surgeons have postulated that time from graft harvest to implantation could be a risk factor for contamination or infection.5

· SPEEDTRAP System's needleless design reduces risk of patient's accidental exposure to blood caused by needle sticks to surgeon or staff. Such exposure to blood carries the small risk of infection and may require blood samples, follow up examinations, and other action.

· SPEEDTRAP System reinforces grafts through constriction rather than piercing the graft. This "atraumatic" approach maintains the quality and strength of the tissue for the patient. It eliminates soft tissue risers in the tendon fibers that a needle and suture can cause, potentially weakening the structural properties.

· SPEEDTRAP offers consistent, even distribution of whipstitches. The system compresses and tubularizes the graft to easily pass through bone tunnels. A study found that tubularized tendons exhibit better strength and less stiffness than non-tubularized.17

Reducing steps within these procedures while maintaining the procedures' quality and strength can positively impact the entire system. SPEEDTRAP meets the unmet clinical needs to today's orthopedic surgeons as it:

· Preparing the graft tendon is time-consuming and often requires help from a physician's assistant. It also can require multiple steps and tools using a traditional method.

· Needleless design protects the surgeon or operating room staff from the risk of needle stick injuries.

· Flat spine suture anchors the winding sutures to evenly distribute whipstitches along the graft rather than piercing through the graft.

· Strong suture construct maintains strength required to meet clinical conditions yet does not lacerate graft during tensioning and cyclic loading.

· Pre-packaged, disposable delivery design facilitates the deployment of the sutures on to the graft and minimizes graft preparation time.

With SPEEDTRAP System, surgeons can avoid the multiple holes caused by the needle passing through the tendon, which can disrupt fibers and possibly lead to failure of sutured tendons along needle/suture holes2.

SPEEDTRAP system offers an innovative, groundbreaking alternative to both traditional whipstitching methods and competitors' systems in the market.

Faster and Stronger than Competition Tested

· Uniform, consistent whipstitches compress the graft rather than lacerating it.

· High-strength "winding" suture is anchored to a flat spine suture that ensures tubularization for graft to easily pass through bone tunnels.

It's intuitive and easy to use. Even the newest staff member can quickly learn how to whipstitch using SPEEDTRAP System with minimal training.

The process behind the development

The SPEEDTRAP design and engineering team had to overcome several design challenges to achieve the solution: a single piece, injection molded into a flat two-dimensional pattern. The user assembles the suture delivery device by "folding" the structure to create a three-dimensional delivery device which carries the implantable suture construct and maintains graft position during deployment.

· Cinch Force: The team needed to ensure the force required to cinch the winding suture was not so high that the suture could cut surgeons' gloves. This was challenging because the winding suture configuration creates a "torturous" path around the soft tissue graft that increases force as the sutures cinch.

To overcome this, the team coated the suture and optimized the pick count of the winding suture for greater smoothness, suture materials and integration through the spine suture and delivery device.

· Construct Strength: The team had to create a needleless solution with holding strength equal to or stronger than existing suture/needle offerings.

The configuration through the spine suture and number of "crosses" created during assembly increase strength. Additionally, the spacing and crosses negatively impact cinch force. The team conducted numerous Designs of Experiments to understand all variables before finalizing the design.

· Integration of suture construct onto delivery device: Maintaining the open configuration of the suture on the delivery device was another significant challenge. The team achieved this with a design using open slots to create slight interference with the winding suture to hold it open, while still providing enough clearance to allow the sutures to cinch through the slots with relatively low cinch force. Additionally, the sutures had to disengage from the delivery device quickly and easily once cinching was complete. The team accomplished this by designing a slot that holds onto the spine suture with "just enough" holding force during cinching, but releases immediately after cinching.