The Hydros concept offers a faster and safer alternative to saturation diving, which is the current standard solution in sub sea bolting. The main benefits are derived from the fact that a human no longer need to be exposed to the dangers of deep diving as well as crucial functions that are only possible in an automated system. The work is based on a field trip that was conducted in cooperation with and sponsored by Atlas Copco with an end goal to explore new ways of developing hydraulic bolt tensioning tools. The new solution is more flexible, both in regards of time and function. The lack of human intervention also removes large costs that may instead financially motivate the development and retail of this product.
This project was done in cooperation with Atlas Copco Industrial Technique. 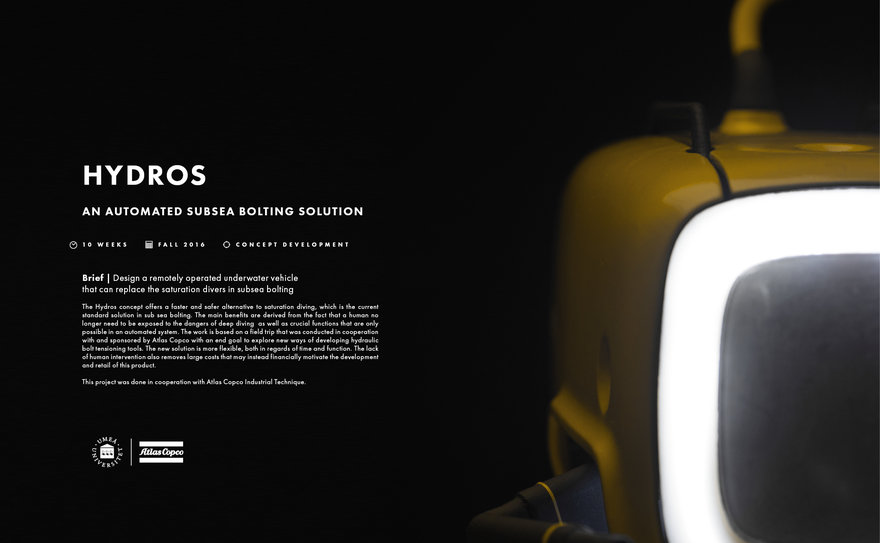 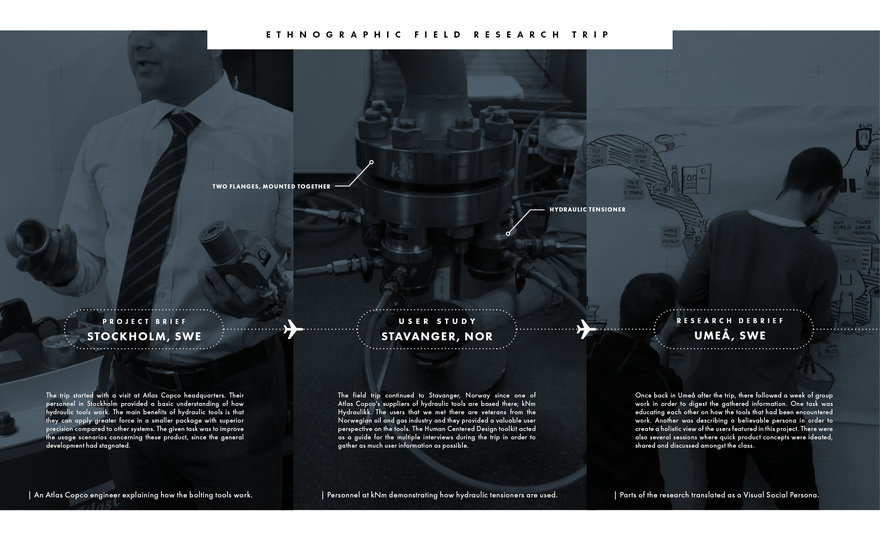 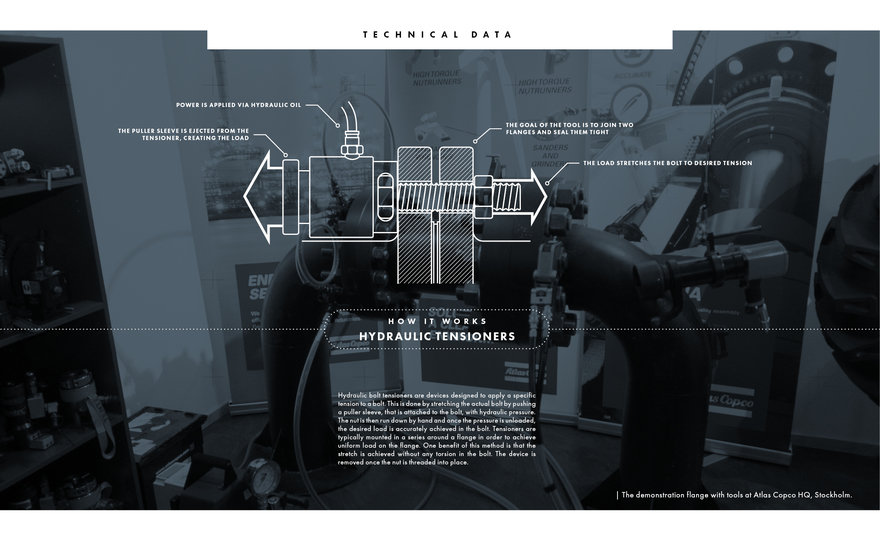 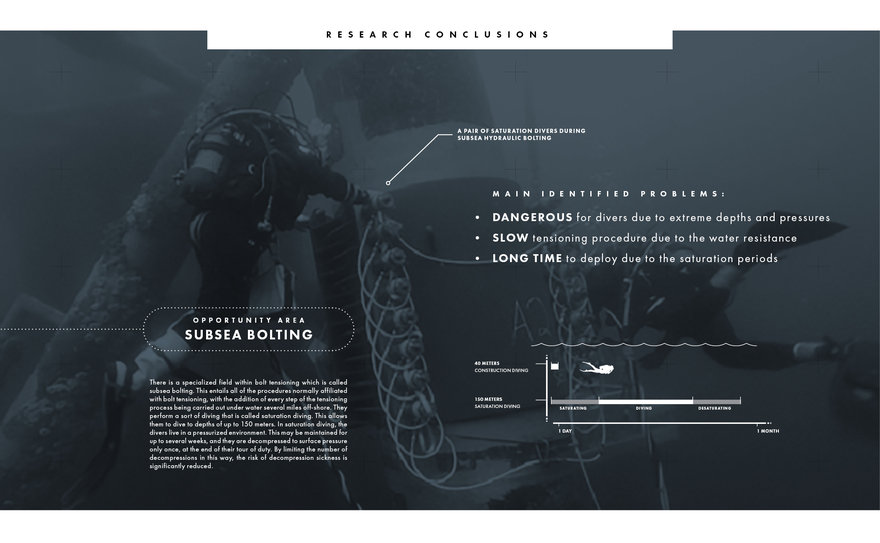 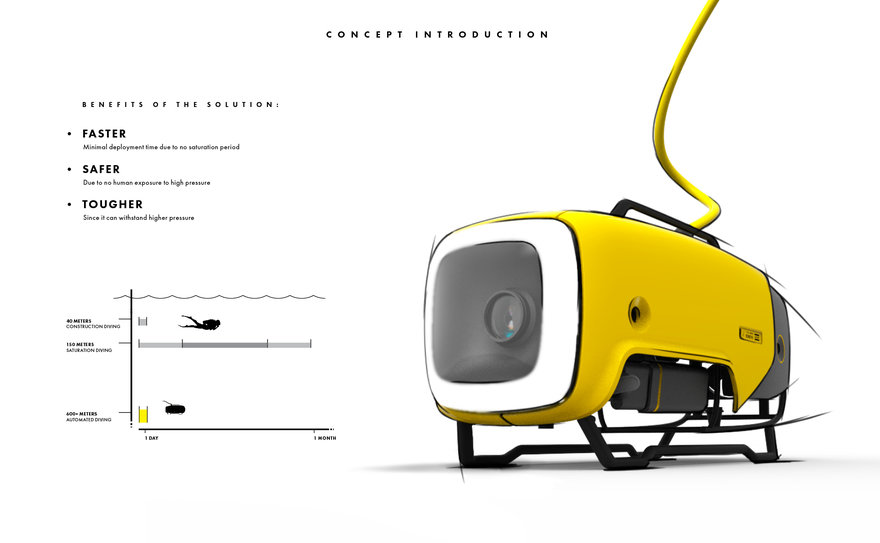 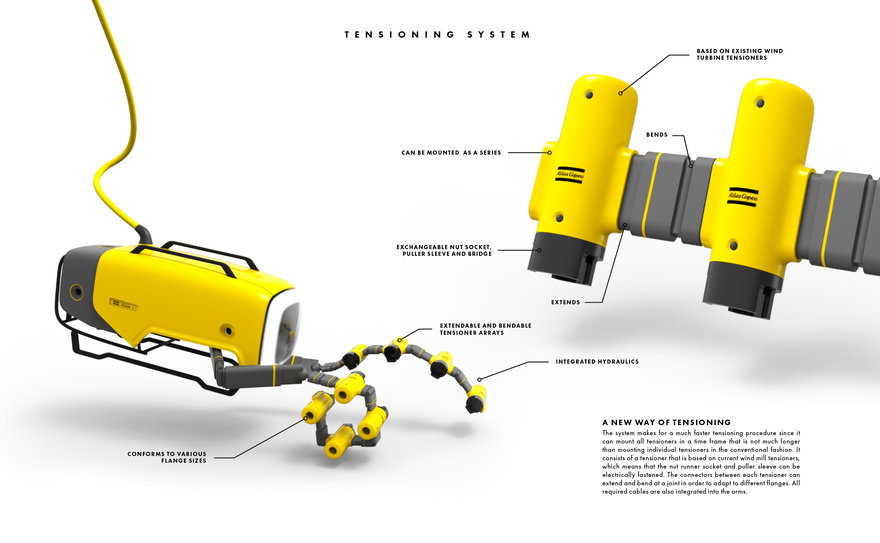 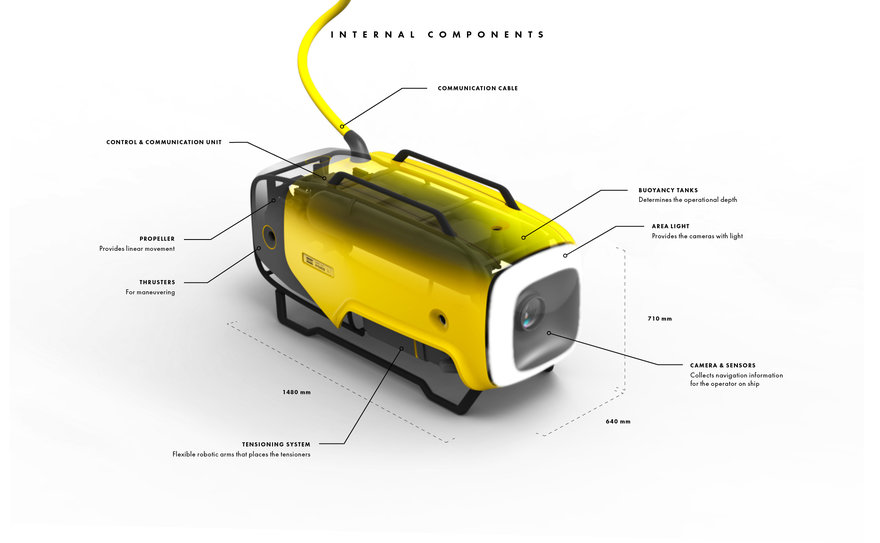 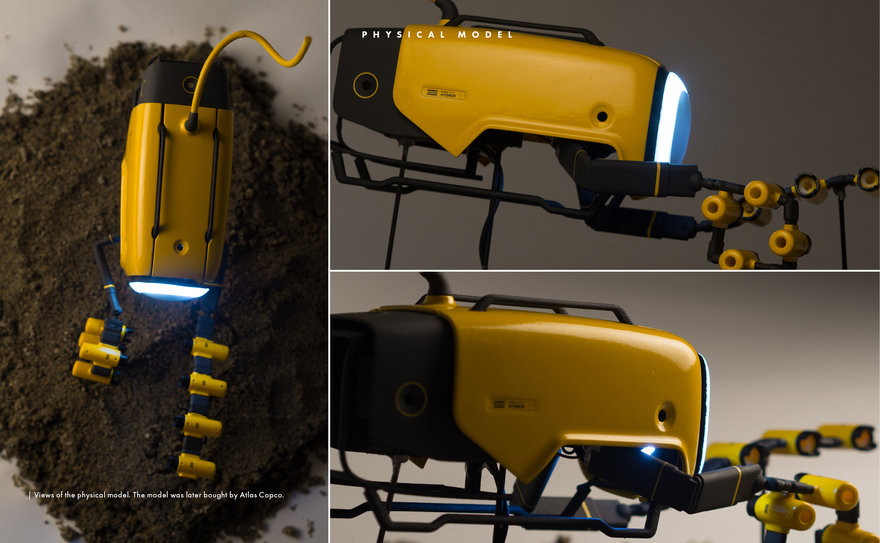 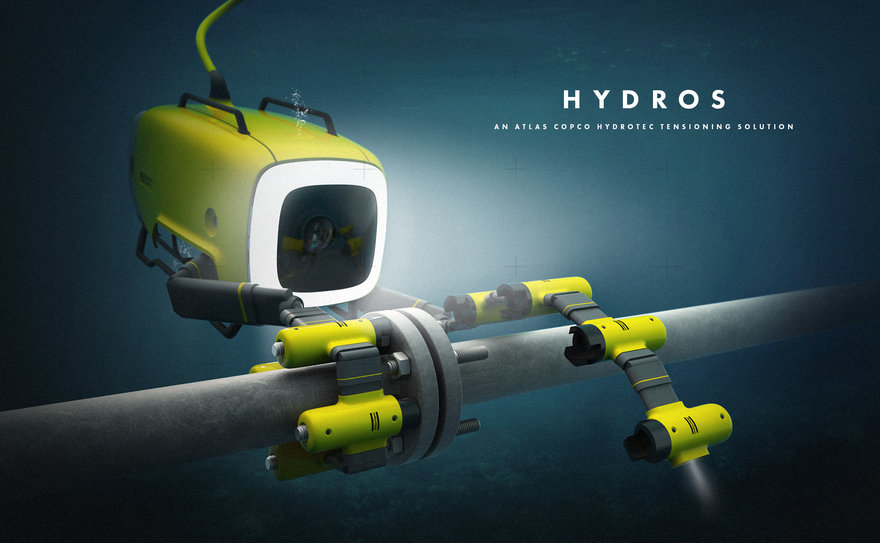 This project focuses on how the sub sea bolt tensioning procedure can be improved with the help of automation and robotics in the form of a remotely operated underwater vehicle (ROV). The resulting concept envisions a superior alternative to the current standard in sub sea bolting. The benefits are based on the fact that a human no longer need to be exposed to the dangers of deep diving, as well as crucial functions that are only possible in an automated system.

The work is based on a field trip that was conducted in cooperation with and sponsored by Atlas Copco with an end goal to explore new ways of developing hydraulic bolt tensioning tools. Atlas Copco has been available for feedback during various milestones during the project.

The final solution is substantially faster and safer than the current diving methods and make the bolting solution more flexible, both in regards of time and actual bolting scenario. The lack of human intervention also reduces costs that may financially motivate the development and retail of this product.

The principle of joining two parts with a nut and a bolt is prevalent in an enormous array of products, from minute electronics to vast bridges. The size of the nuts and bolts vary according to the load that they need to withstand. This project concerns the more extreme cases of bolt tightening that are applied in the assembly of wind turbines and oil platforms, to mention some applications.

Atlas Copco has been involved as a sponsor and advisor in this project. They recently acquired a series of companies that specialize in hydraulic tools and they currently offer a range of bolt tightening solutions, their more traditional electric and pneumatic solutions and their new line of hydraulic tools.

The main benefits of hydraulic tools is that they can apply greater force in a smaller package with superior precision compared to other systems. Atlas Copco’s interest in this project lies in how their newly acquired tools can be improved, especially their usage scenarios.

An opportunity to overhaul the tensioning procedure itself presented it self when it became apparent that the technology already present in the product. The idea is that instead of placing hoses and tools individually, they could be incorporated into a modular system. This would make the placement of the tools more efficient and could also remove the need of external cables since they would be integrated in the system. Hydraulic tensioners were chosen as the operating tool in this system due to the more controlled operation and lack of moveable parts.

The concept features clues from both Atlas Copco industrial tools and from other Atlas Copco divisions, such as the mining vehicles. The reason for this is mainly the size of product. While it is roughly the same size as a human, it is much larger than a hand held tool. Therefore the design incorporates a layer strategy over a frame construction that lets the components work unhindered and remain accessible for maintenance. Extra attention was given to the areas that are central to the products function, such as the camera housing and the robotic arms.

The new tensioning system consists of a tensioner that is based on current wind mill tensioners, which means that the nut runner socket and puller sleeve can be electrically fastened. Those two components, along with the bridge, may be easily exchanged in this model when corresponding button is pressed. The connectors between each tensioner can extend and bend at a joint in order to adapt to different flanges.

The system makes for a much faster tensioning procedure since it can mount all tensioners in a time frame that is not much longer than mounting individual tensioners in the conventional fashion. Also, the system would be able to align the tensioners prior to mounting them since it would know what sort of flange it would fasten, either via recognition or pre loaded data.

The most attention in the exterior design have been given to the front of the design, where the main functionality of the product is located. In the very front is a wide-angle camera and other sensors that provide information to the operator back on the ship on the devices location. This information is transported via the cable which houses a steel wire and fiber optics along with power supply. There is a large area light around the camera that illuminates the environment that Hydros is operating in, providing more even light distribution due to the fact that it wraps around the camera housing.

The tensioning system is folded into the body in order to not get tangled or damaged during transport. The roof and the belly features rails that provide utility and protection.

The inside of the device features a central control unit that makes the system run as intended. It also features a pump for the hydraulic tensioning system. The hydraulic pump also powers the propeller and the thrusters, making them both powerful and operate smoothly.

Hydros features a buoyancy system that differs from conventional ROVs. Since the weight of the product may vary with the amount of tools it is equipped with, it regulates it’s buoyancy with a set of air tanks, much like a submarine does, making the buoyancy system very flexible. This is also more material efficient than the conventional foam blocks found in other ROVs.