IRS-25 is a concept that tackles efficiency and experience issues of todays Rockbreaker machines. These machines break large rocks for better transport and moving them on a grid so that they can fall though. Since this is one of the most important points in the production, time efficiency is the most essential factor. But when the operator is trying to hit the rocks with the breaker tool to crush them, they often slip away. The ground and the rock geometry make it hard to hit them correct. This concept gives the user the opportunity to stabilise the rock by putting force on the rock with a simple claw which is attached at the breaker. This also reduces damages when moving rocks on the grid. Hydraulic Breakers are not designed for horizontal forces but the operators are using them for this task to save time. The claw protects the tool and reflects the forces to the strong main body of the machine which increase dramatically the lifespan of the hydraulic breaker while reduce costs of maintenance and production stops. 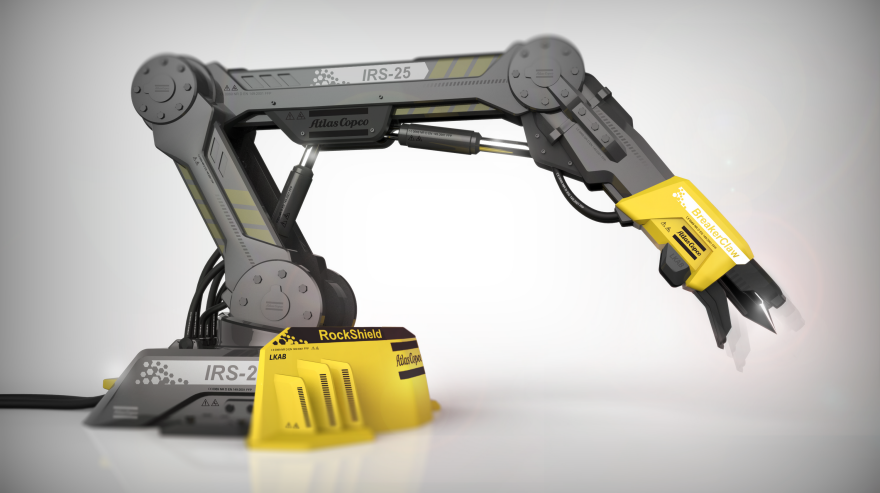 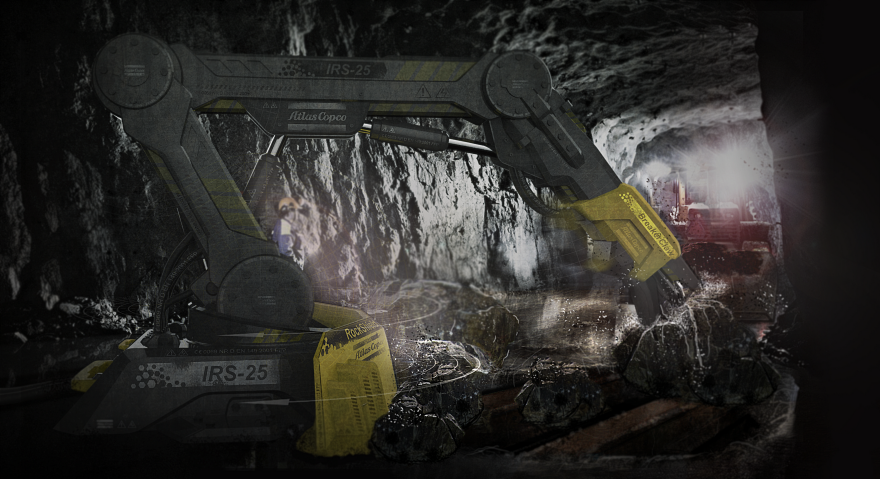 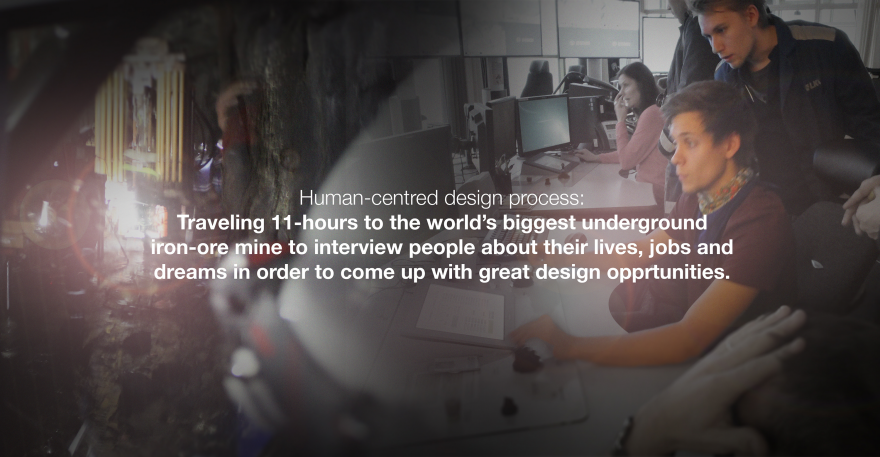 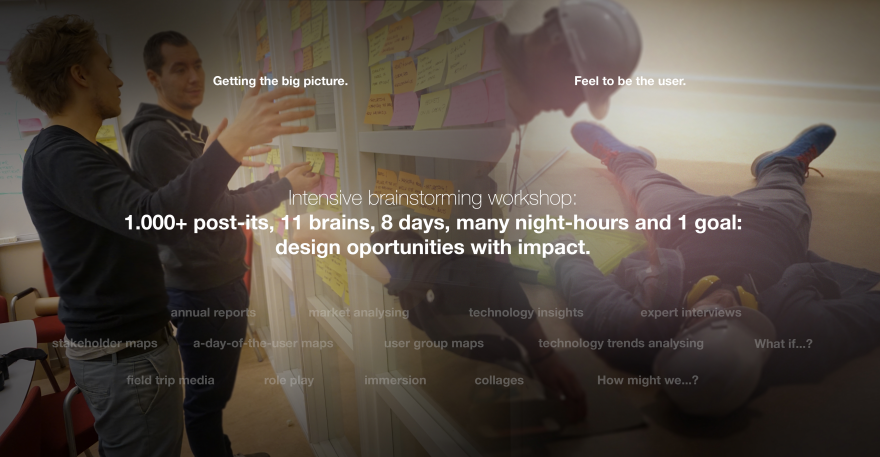 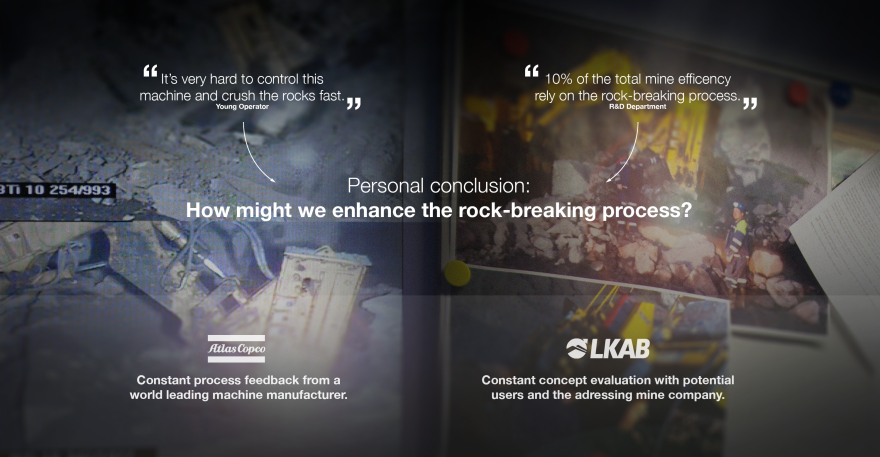 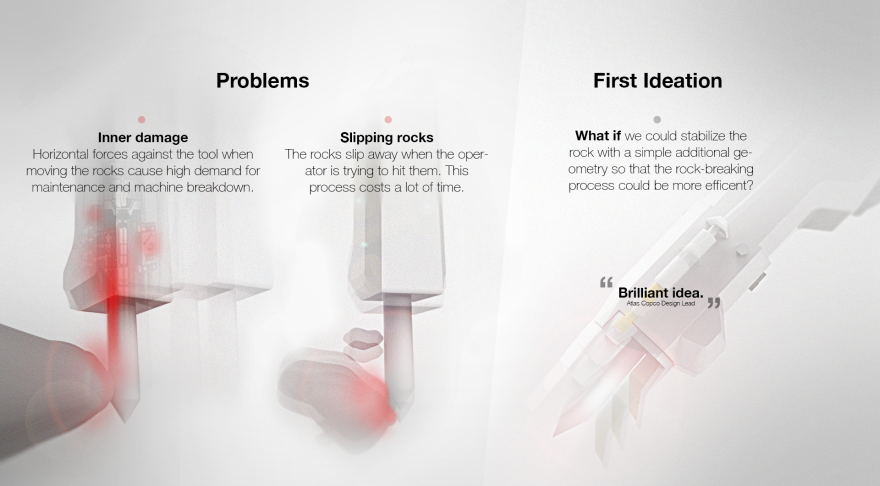 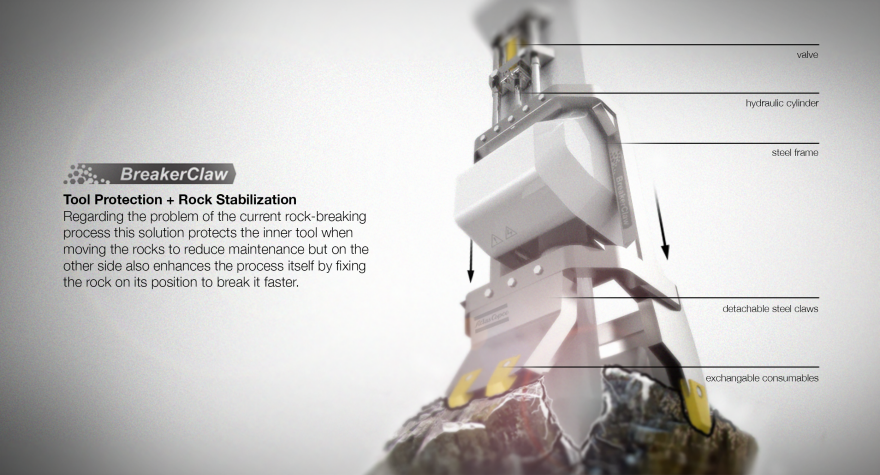 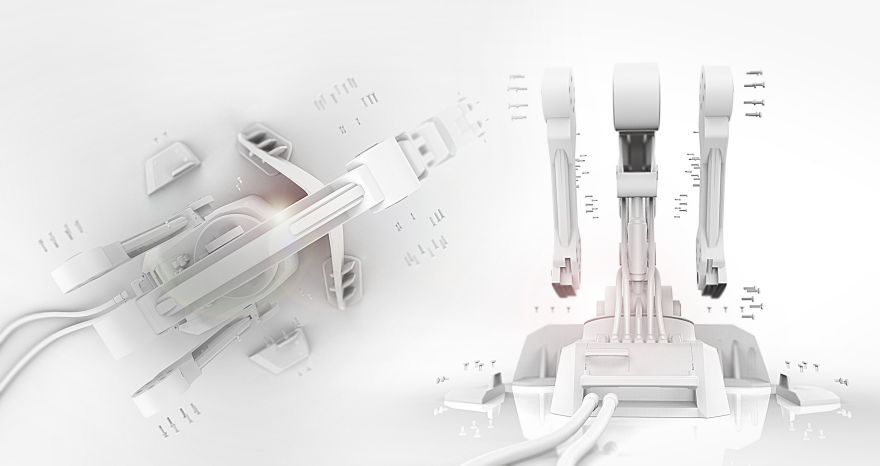 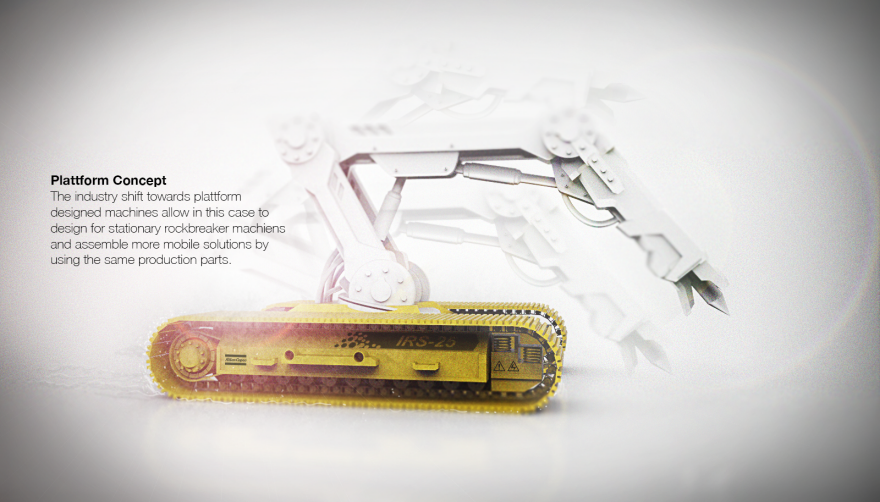 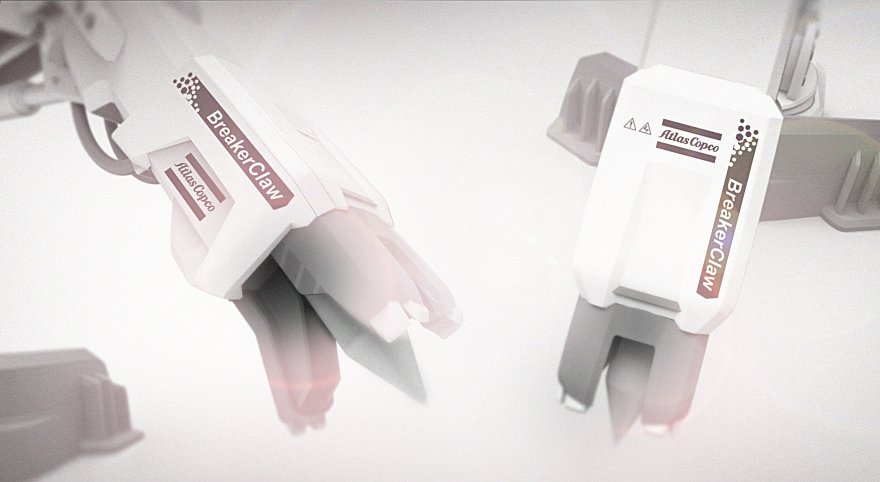 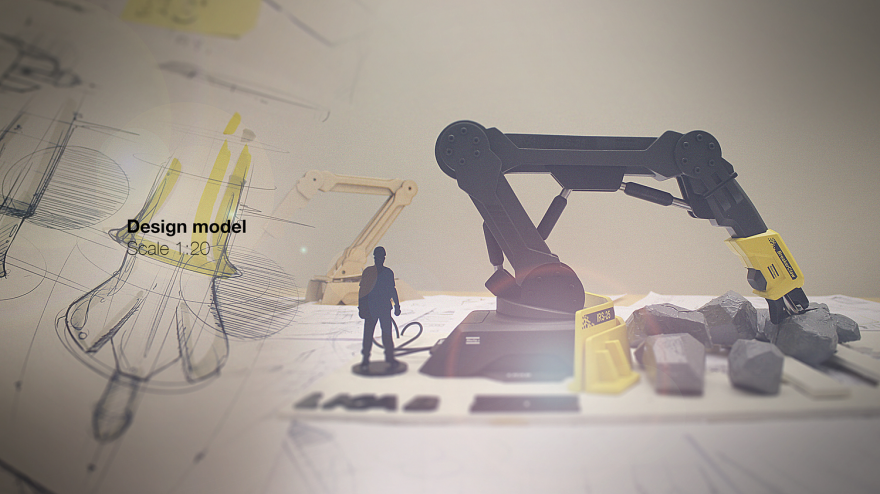 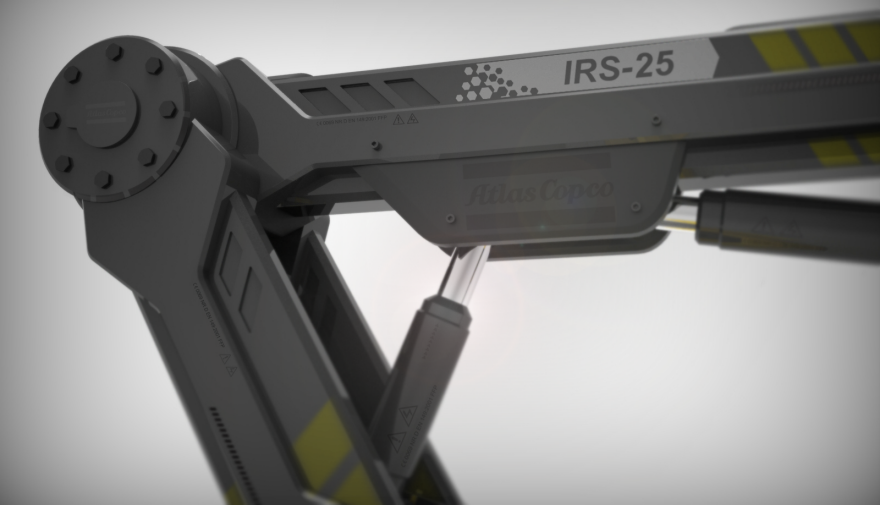 The mining industry relies heavily on time efficiency. Machines, energy and human-recourses underground make the production phase extremely expensive. This set the focus of the project in the very beginning. The project has to improve the efficiency or at least not decrease it. A harsh environment, complex technical and logistical infrastructure are examples for many circumstances around the rock breaker machines which are framing possibilities. It was important that the solution is easy to adapt and works in the current workflow and infrastructure. Every part of the mining production is connected to each other which have to be considered when designing a new specific solution. For improving the rock-breaker process it was challenging to design something that works with current parts and is technical implementable. This is the reason why the all solutions of IRS-25 are applied outside and attached to current solutions. This makes it easier for businesses to adapt to this ideas.

After observing the rock breaking process, speaking to engineers and operators who control this machines, two majors problems where concluded. First and foremost slipping rocks and hitting the rocks correct take a lot of time. The harsh environment and the rough ground makes it difficult for the operator to hit the rock so that they break into pieces. Even though a range of cameras and view angels from every perspective, it is very hard to position he breaker tool at the perfect place of the rock before hitting them. The power of the breaker is so strong that often it slips to the side or the rocks slip away. In this concept, the "Claw" is stabilising the rock. When the Claw is pressing on the rock, there is no chance that the rock slips away and the full power of the breaker can hit on the rock which increases time efficiency of the rock breaker dramatically. Nowadays it often costs a few tries for the operator to get the rock crushed. Though the fact that hitting in the air when missing the rock cause inner damage at the breaker is another side effect of the current problem. The reason for that is that the tool always need a geometry which takes the forces from striking. If it misses the rock, the breaker have to take the forces from striking itself which destroys the breaker over time and reduces the lifespan. By stabilising the rock with the claw it is safe that the breaker hits the rock which will take all forces. The problem of lifespan and maintenance is caused furthermore by the fact that the operator uses the breaker tool to move rocks on the grid to push them into the gabs of the grid or to bring them into the right position to crush them. Since the breaker is just constructed for vertical forces, these horizontal forces against the breaker tool cause high damage. The "Claw" is protecting the tool for that and give the operator a better and larger geometry to move rocks. It reflects the forces to the main body which increase lifespan of the breaker dramatically and reduces machine downtime. Furthermore the shield in the front of the machines protects the machine and gives the operator an additional body to work when moving the crushing rocks. It also splits the machine into two areas: the area of working and the back area for maintenance which enables a more structured overview and enhanced worker experience.

The approach of solving these problems is based on a very human-centred design process. When visiting the world's biggest underground mine in Kiruna, Sweden, users were observed and interviewed at their work. The stories about their works and lives displayed the problems they are facing everyday. Looking from a fresh perspective on these problems and trying not to take them for granted drove the project process. When questioning these problems they experienced for years, when interviewing and observing the operator at his work, displayed the core of the design opportunities. These stories and conversation where always the base of the problem frame. The very first idea was to have an additional geometry that makes the work of the operator easier. The final solution was developed in many steps. The first idea was to give the user a second arm which holds the rocks to stabilise it which leaded to the idea of a box that is attached around the breaker and frames the rock so that it cannot move away. The fact that the global leading machine manufacturer Atlas Copco and most important experienced users and operators from the mining company LKAB were always part of the process and gave feedback on the ideas in multiple steps of the process helped to develop the idea into something that is useful for all types of stakeholders. The idea of the box leaded to the idea to the claw to enable high visibility. The back claw allows the operator to "grab" stones which are very far away and slide towards them which is nowadays enabled by the geometry of the breaker and is a common move. It was very important that this concept is adaptable into the current workflow, business and production. This is the reason why the Claw and the Shield of the breaker are attached on standard machine parts. The process had to include the design of technical parts, because it was important that the solution is cost-efficient and needs as less parts as possible. The number of hydraulic cylinders have been reduced to a single one by implementing a simple valve which gives the operator the opportunity to use the provided power of the machine arm. The solution also includes consumables parts (see picture 3). This is a common feature of machine solution and gives the opportunity to quickly exchange parts if it is needed.

The process of this design project includes a range of these machine's users which gave feedback at many steps of the process. The biggest design opportunities where concluded for the operator which is controlling this machine underground while working 1300 meters upwards at the surface in the control room. Their stories and the observations were the sources which made the conclusion of the design opportunity as well as the process possible. They benefit from this concept by increasing their ability to crush rocks easier and more efficient. Since this process takes time and makes up to 10% of the total mine efficiency their work speed is very important for the profitability of the whole mine. Furthermore the machines have often to wait till they are done with the breaking process to unload more rocks for instants which puts a lot of pressure on the shoulders of the operators.

Rockbreaker systems have, similar to other heavy machine, work solutions for years or centuries and get just replaced if maintenance cost are too high or a new technology is available. The lifespan has been considered at this concept by including the ability to remove single parts for quick maintenance. But beyond consideration the lifespan was the leading design opportunity in this project process. As described earlier this solution expands the lifespan of the breaker and the machine dramatically by tool protection and enabling safe crushing process. In addition the placement of the hydraulic cylinders under the arm provides protection for small falling rocks.

The main market is the iron-ore production industry which is a global industry. All solutions of this concept would find their advancement in all types of breaking processes which would go beyond iron-ore. Since iron-ore is one of the most important materials and is a very strong material which is hard to break the project is mainly focused on this area.

Since the solution should be easily to adopt for business and working in the current workflow it was important that it uses the same traditional materials and production methods like modern Rockbreaker Systems. Since this machines have to handle heavy forces and work in a very harsh environment, they are mainly made of casted steel and formed steel sheets which includes machine, shield and claw. This leads ups to a very high weight which is necessary to endure high forces from rocks. For assembling and in case of maintenance the designs include a large number of hex bolts.

I'm thrilled that this group of students was brave enough to go solve some of these very difficult problems.