Savannah College of Art and Design

This project spawned from witnessing a very angry crowd in Savannah, Georgia on St. Patricks day.

There are no acceptable solutions for disposing of human waste in situations that lack a conventional toilet. If asked, "what is one of the most common worst experiences known to the contemporary person" what would you say? After having conversations with approximately 200 people from 6 different countries the answer was obvious: using a port-a-potty. 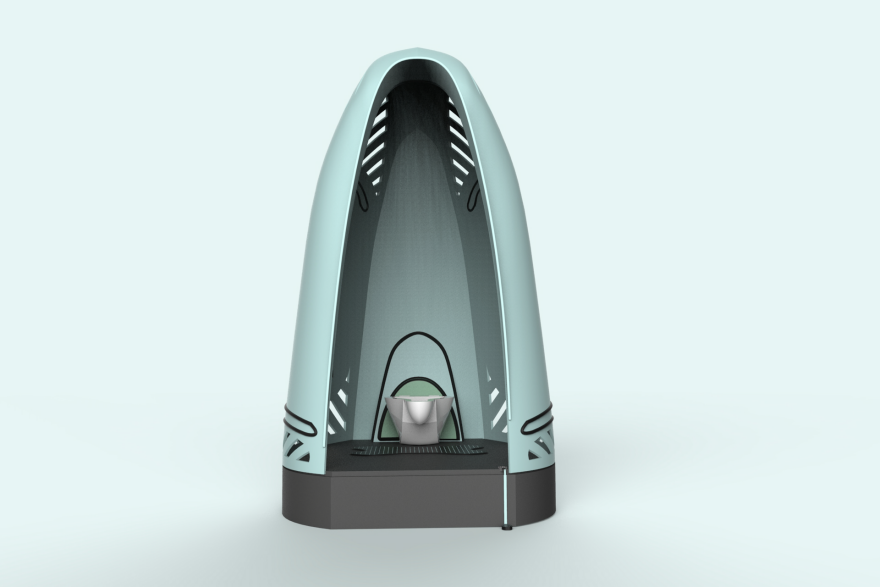 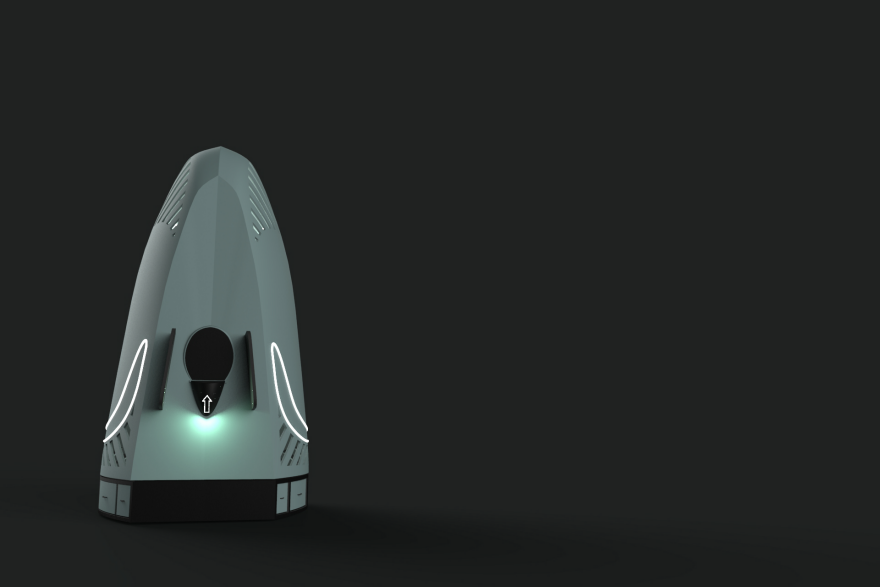 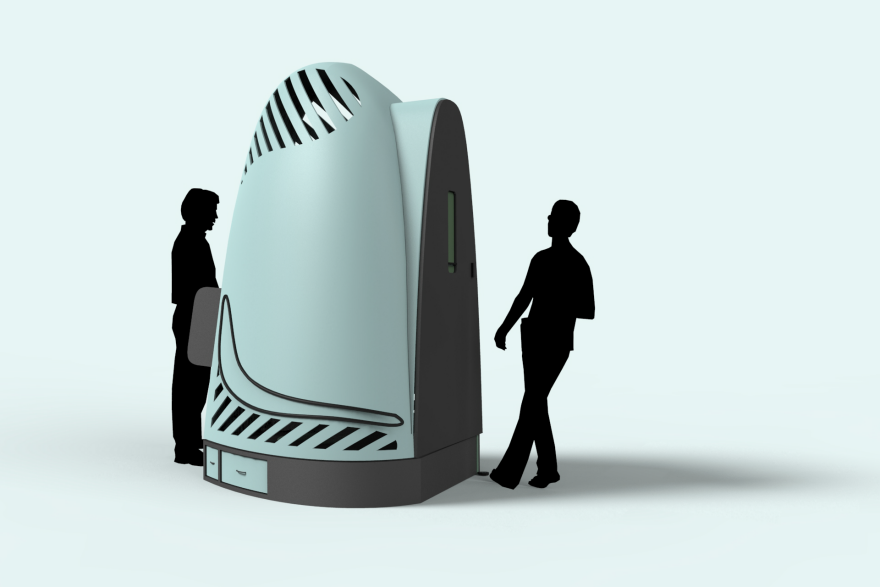 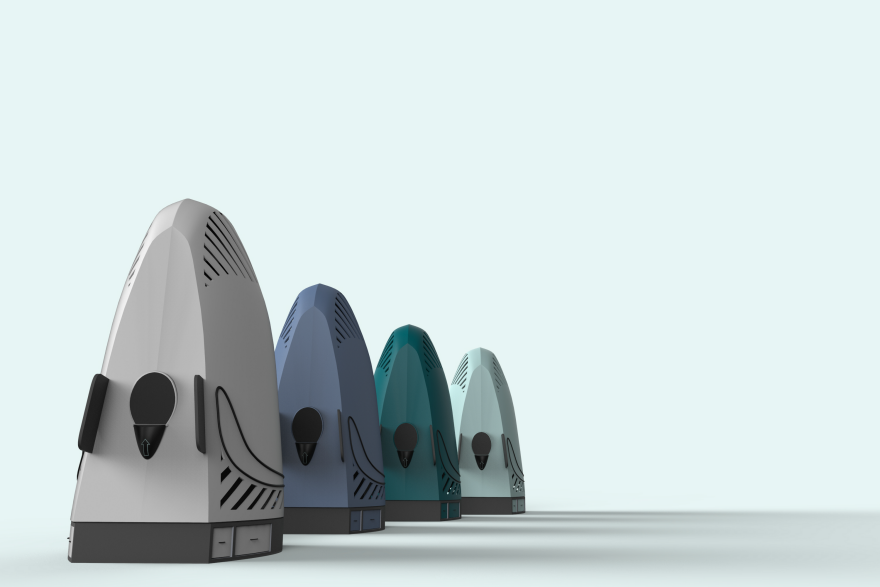 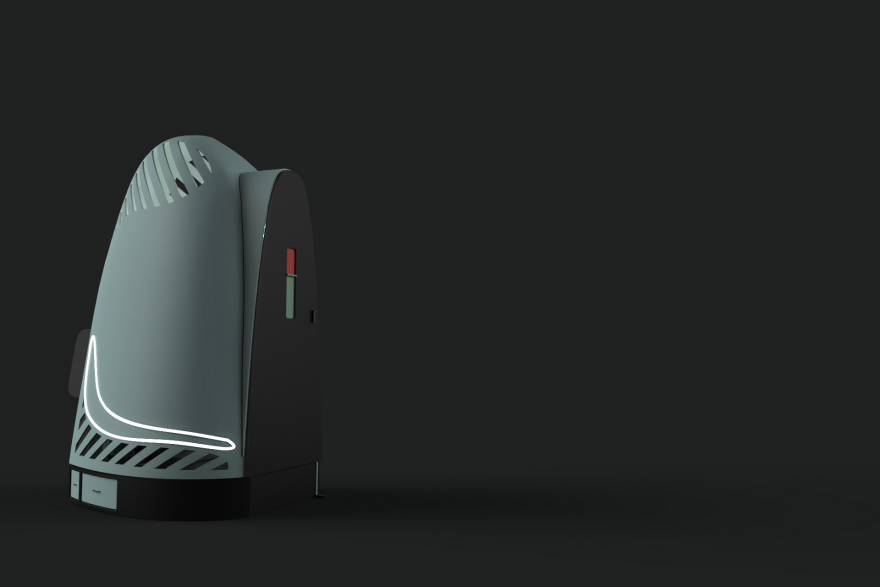 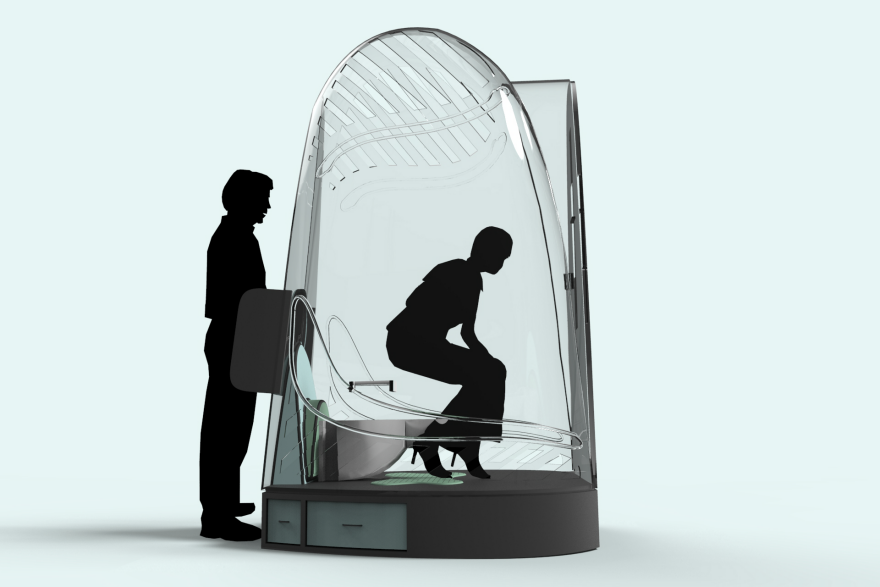 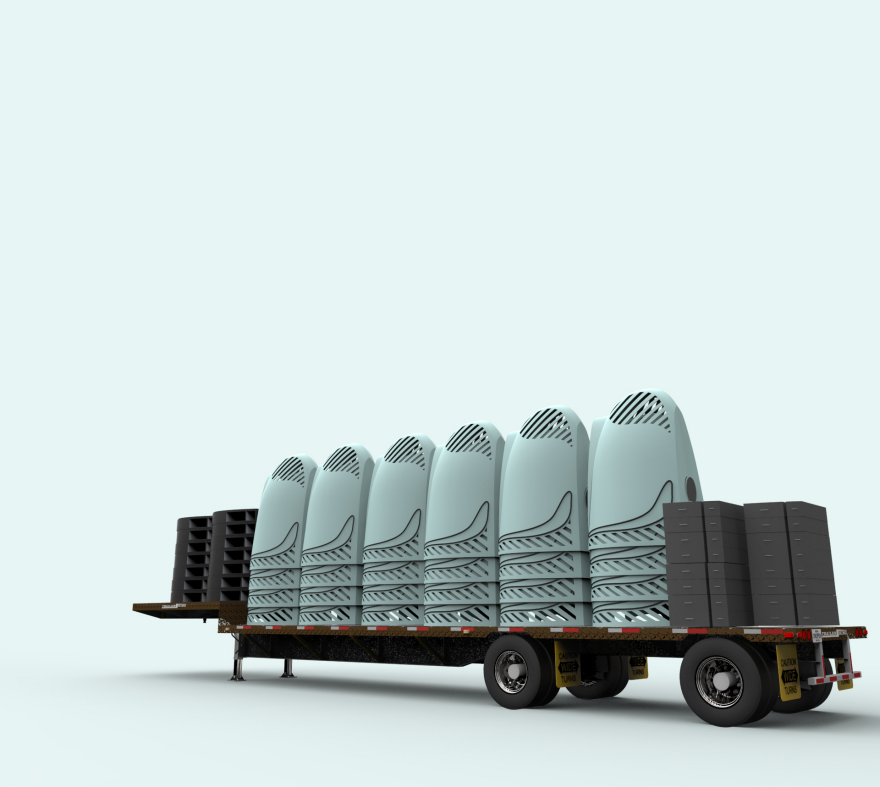 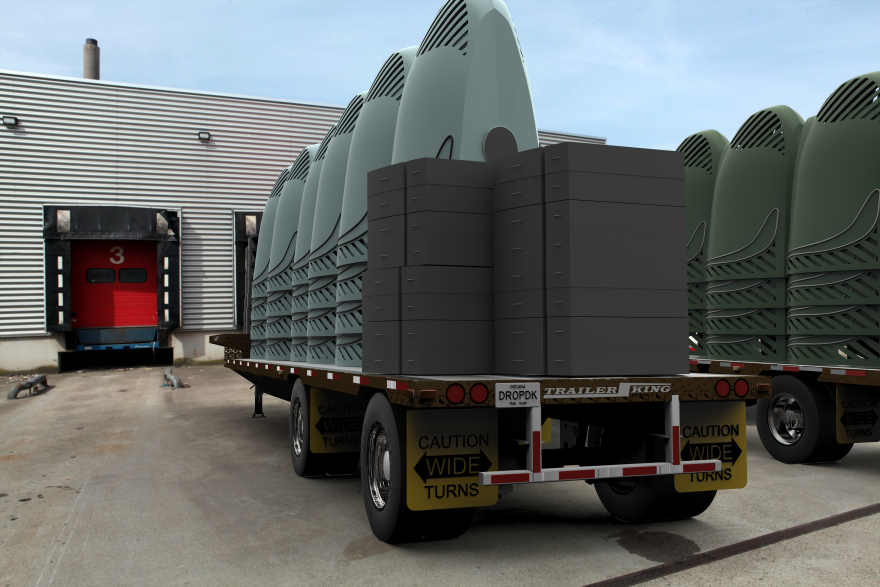 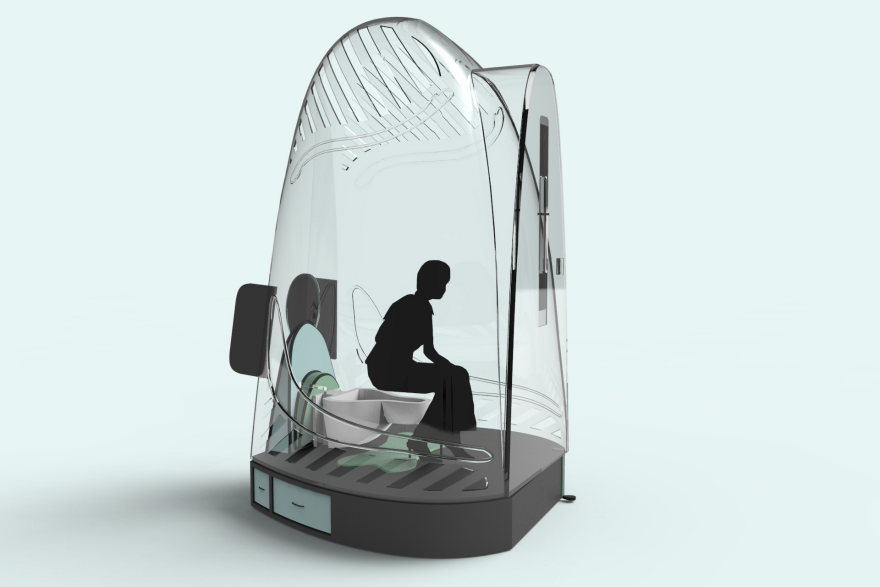 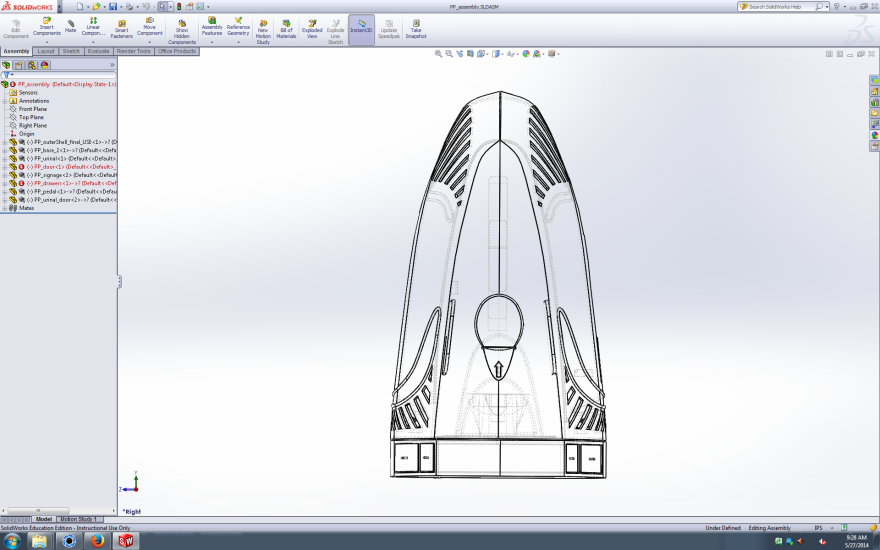 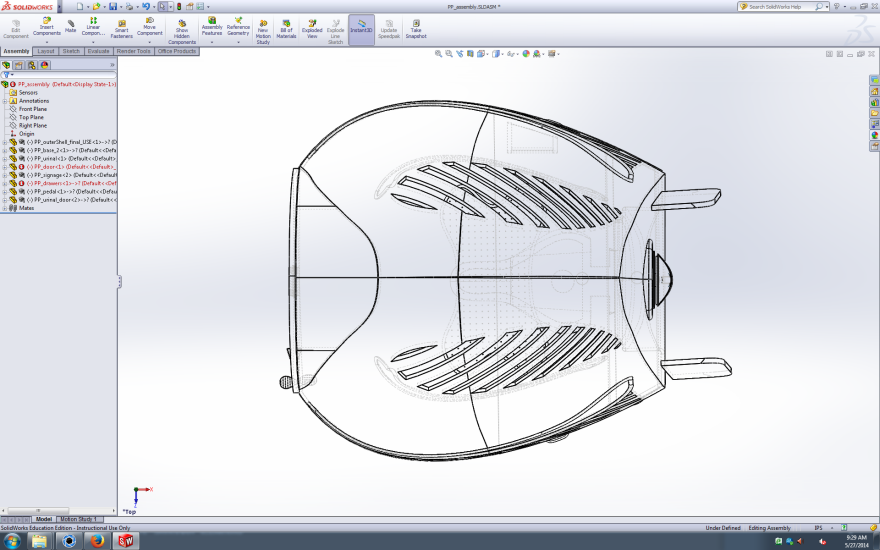 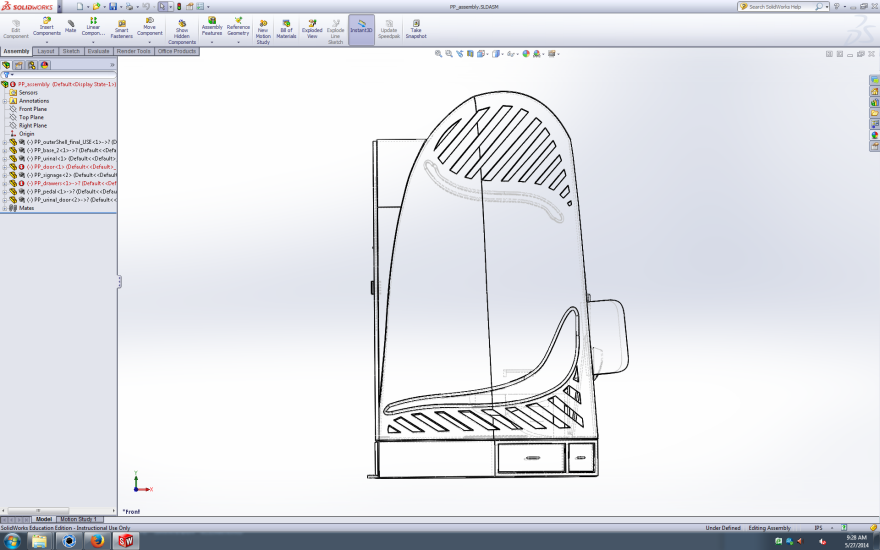 Good product design solves a problem, it is not ornamental. In order to redesign both the structure and the experience of the current port-a-potty design I had to understand the problem. First of all, the port-a-potty as we know it today has not been re-designed since its conception in the 1940's other than some material changes throughout the years. Since discovering this information I had to start from scratch in order to understand how the portable toilet is being used in our current society, who uses it, who maintains it, where we use it and why we are forced too. I began with identifying stakeholders. It was important for me too speak with and survey all groups associated with waste. I surveyed people ranging from the person who cleans a port-a-potty to a mother dealing with her newborns waste. After collecting this data and many hours of mind mapping 5 themes emerged: privacy, cleanliness, space, ventilation and the grey water system. These themes covered the entire design - from injection molding to your feces floating down the sewage line. One advantage too having conversations with people alongside issuing statistical surveys is that you get the story: the touch, the taste, the smell, the feelings. From these conversations it was certain that 2 things were true. First, nobody wants to touch a single thing with their hands inside or outside of a port-a-potty. Second, 80% of people "hover" over the toilet seat and do not sit down at all. Upon analyzing these findings it was easy to begin sketching. I knew what components were necessary for a successful design and experience.

These are the key points that make BioPod better than any port-a-potty on the market today.

The front of the exterior structure is designed along a curve to maximize the opportunity for "hovering" (without banging your head on the entry wall) and the toilet seat has been re-designed to be somewhat of a female urinal. If nobody uses the seat than the design is obsolete. These two new components working together allows the user to squat easily and comfortably.

There are zero touch points. A pedal with a simple mechanical pulley system is on the inside and outside of the structure. When pressed, the door opens and/or closes while simultaneously changing the signage from 'vacant' to 'occupied' depending on whether the user is using the inside or outside pedal, respectively. There is also no need to touch the toilet seat itself, as stated above.

Ever gone into a port-a-potty at night? You probably accidentally bumped into something and splashed some foreign matter onto your leg because there is no lighting inside of the current design. BioPod has LED's on the exterior so you can see the structure from afar and on the interior so you don't have to do your business in the dark. These specific LED's harness power during the day via solar rays and displace the energy at night.

One of the biggest complaints about the current design lies within 2 senses: smell and sight. Ventilation is poor, odors are terrible and there is nothing covering the waste itself. It is literally right in your face as you walk in. A pressure system that is integrated into a mat beneath the toilet solves these problems. When you enter the structure, the waste hole is covered. As you approach the toilet, turn around and squat, your feet trigger the pressure mat which causes the slat to open. As soon as you step forward the hole has closed up again, thankfully allowing the user to virtually never see the waste itself. This also provides a simple solution for some odor control.

A big question posed during research was 'how much privacy is enough privacy'? Using the restroom is an extremely private event and nobody wants to be exposed. Research showed that the majority of people are comfortable with 2 areas being exposed: shin to floor and shoulder to ceiling (while standing up). Nothing above the torso should be exposed while sitting down. With this in mind, extruded cuts were implemented into the top and bottom of the structure. The cross-diagonal pattern of the opposing cuts allows for the best natural airflow possible.

During some very awkward ethnography practice I realized that men only use port-a-potty's if they have to defecate. That is some seriously wasted biomaterial. I took it upon myself to not only re-design the experience for the end user, but for the people who store, maintain, transport and clean these structures too. The life of a current port-a-potty starts as a piece of storage on a lot. It is then transported and used at a site. A worker then comes and sucks the waste into a vat that is eventually transported to the city's sewage plant. The structure is cleaned and transported back to the storage lot. There are many opportunities here. When contained, feces can produce methane which can be harnessed as a biogas for electricity. Urine is rich in nitrogen, potassium and phosphorus which are the 3 main ingredients in artificial fertilizer. In order to capitalize on these biomaterials, BioPod has a urinal attached to the back, planar side of the structure. A privacy panel is attached on both sides of the urinal so that a guy can walk up and do his business while still being covered from his abdomen to lower thigh.

The BioPod is designed for disassembly. There are four main parts: the base structure, the outer shell, the biomaterial tanks and the urinal. Each can stack on top of each other to make transportation much more efficient. It is estimated that 24 of these structures can fit on a drop deck trailer. Compared to the current designs transportation and storage abilities, this is a 380% increase. Through this feature, owners can increase their services exponentially. They can store 3x the amount they originally did, cater to more clients and rent less equipment for transportation.

Harnessing biomaterial is finally becoming a tad bit more popular. Collecting it in the individual household is one thing, but collecting it on a commercial scale is very doable. I saw an opportunity to do this through the BioPod while simultaneously making the 'cleaners' job much easier and more sustainable. The current port-a-potty is not designed for its own end life, and by end life I mean that last day of the festival when the clean up crew comes. The cleaner's current job is messy, unpredictable and time consuming. The BioPod has been designed for the waste's end life. Containers have been designed into the base of the structure that can easily slide in, out and lock. At the end of the day the cleaner simply needs to slide the containers out and cap them. Ideally, this can serve as an extra source of revenue for the owner. Systems like the Omniprocessor (the Bill and Melinda Gates Foundation) are coming to fruition and could quickly turn hundreds of pounds of sludge into clean drinking water, electricity for the community and revenue for the owner of the BioPod.

Let us all poop in peace.