This project was about identifying and coming up with innovative solutions for the modern mining industry. The project included thorough research with user observations and interviews within the worlds largest underground mine for iron ore. It involved building mock-ups, traditional sketching and digital renders, CAD-modelling, and making a physical scale model of the final design.

Ventilation was identified as the most important design opportunity due to the enormous costs and energy losses connected to it. Since blasting occurs in underground mines the need for flexible and adequate ventilation is huge, both from an energy consumption perspective as well as a safety aspect. LKAB is lifting as much air as they are lifting ore out of the mine - measured in kilos. And this is done from a depth of around 1300 metres below surface. It is estimated that around 30% of their expenses is related to ventilation. The need for a more environmentally friendly ventilation system is huge, especially in less developed mines where there often is a lack of adequate ventilation due to its enormous costs. This in turn leads to hazardous and sometimes lethal working conditions.

The core questions in this project were:

How to minimize energy losses in connection to ventilation after blasting?

How to decrease waiting time for vehicles and workers in the mine?

How to improve flexibility and safety for the employees?

For humans and vehicles to work in a mine there is a need for fresh air. Dump trucks that hauls out the ore after a blast are the main oxygen consumers in a mine since they usaually are diesel powered and the engines consumes oxygen. The other major part of the ventilation is used for extracting toxic fumes after blasting. The fumes prevents humans for visiting the newly blasted area until the fumes are cleared out. This takes up to 24 hours and is considered to be a very costly production stop and a cause for enormous energy losses related to slow and inefficient ventilation.

The project resulted in a flexible solution for mobile and intensive ventilation. The Ventech VU 15 is a radio controlled ventilation unit that connects to the main ventilation system and ventilates toxic fumes at the blast site. The fumes are extracted in a concentrated state to minimise the volume needed to be ventilated and also the time spent on ventilation. The vehicle is dimensioned to handle the fumes created from one blast in less than one hour which is an extraordinary improvement of the ventilation time. By creating a blocking “air-wall” the Ventech isolates the fumes in the current tunnel to prevent spreading. This is done at the same time as it is extracting fumes through a hose connected to the main ventilation system. By doing this, energy consumption is decreased, costs for ventilation is minimised and productivity is increased dramatically. The Ventech also analyses the fumes for early detection of for example radon. As it is today miners only know when they have been exposed after the exposure - if even that. 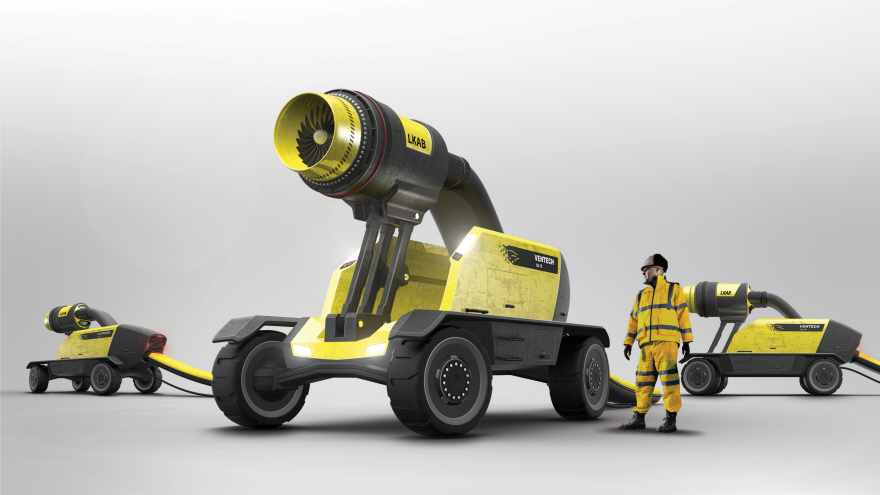 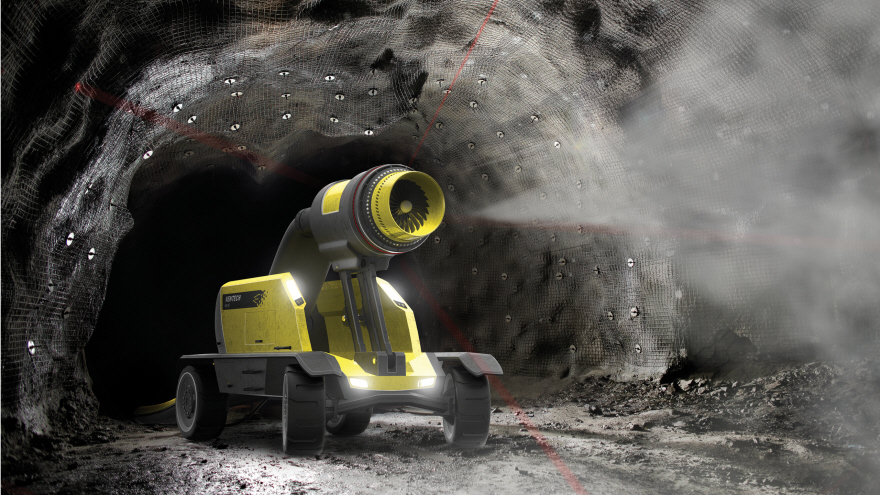 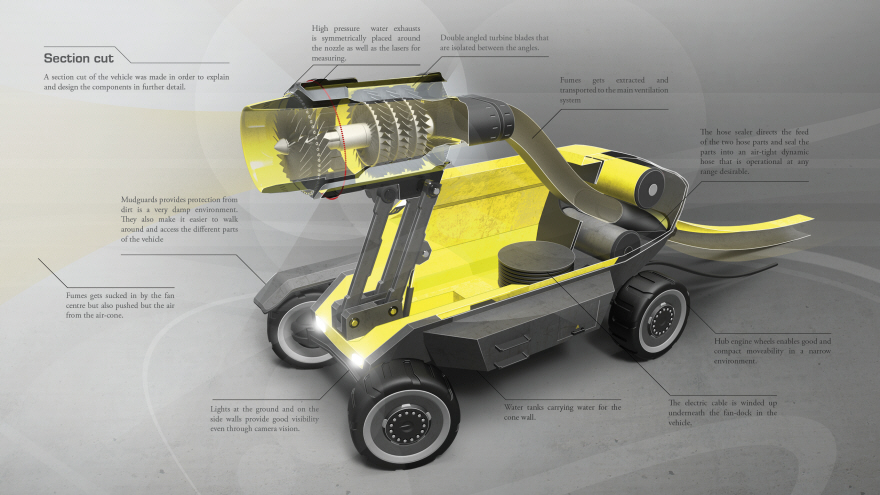 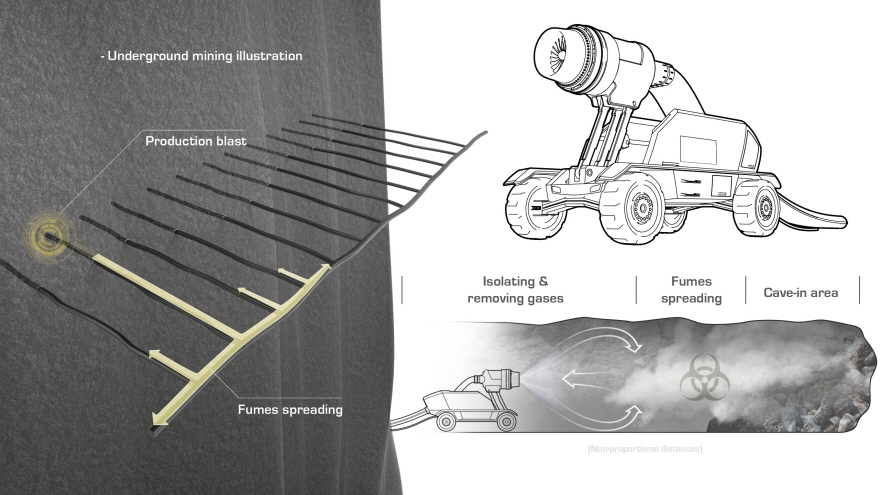 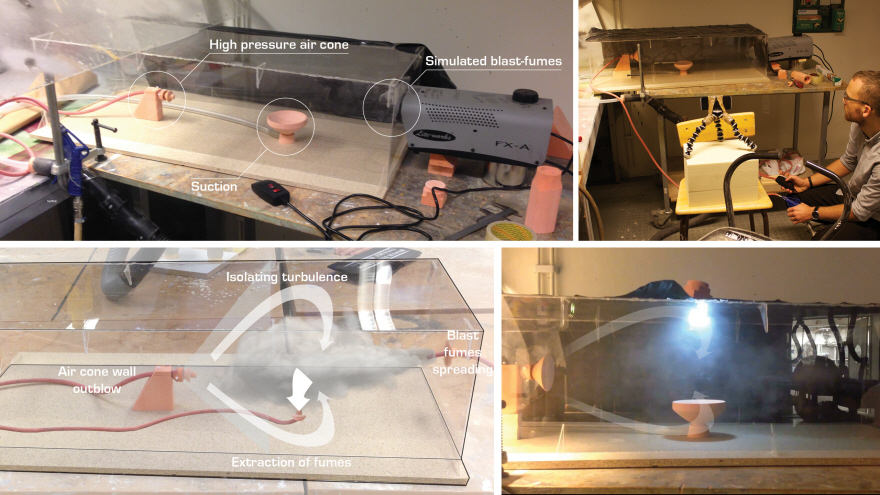 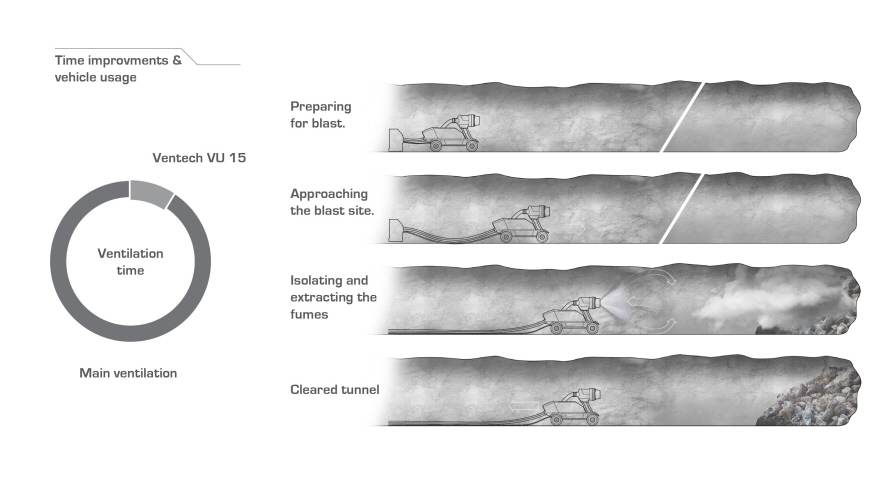 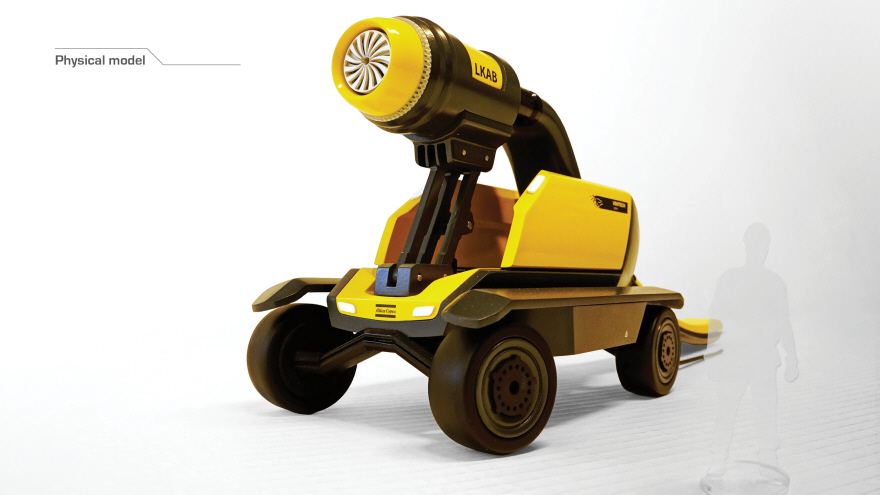 The project started with a study visit to LKAB’s Kirunavaara mine situated in Kiruna in the north of Sweden. A tour was given for the entire process of drilling, blasting, hauling the ore, crushing and lifting it up to the surface. Informal talks with various employees was done aswell as organized interviews.

The overall goal was to remove/neutralize the fumes created after a blast in the mine and doing so as soon after blasting as possible. If the fumes could be ventilated in a concentrated form locally it would radically decrease the production stop and also manage the ventilation in a much more energy efficient way. It would shorten the waiting time for the dump trucks to extract the ore and increase productivity dramatically. It would also decrease the need for general ventilation in the tunnels which requires a lot of energy which in turn is an enormous cost. The project also aimed to see if other issues like rock inspection after blasting could be facilitated combined with the main goal of removing the toxic gases. After blasting, there is a need for inspection of the tunnel wall to ensure remained quality after the blast. Today this is done manually and this is a dangerous task if the tunnel wall has been damaged by the blast since loose rocks and even tunnel collapse could occur. All tunnels are laser scanned when they are made and the Ventech was designed to take advantage of this. It has a laser measuring tool mounted on the fan to measure the tunnel wall as it is ventilating. Since the Ventech is radio controlled and the first one on site after a blast this is an important safety improvement. The Ventech measures the tunnel profile and compares it to the previous laser scan for deviations. If the tunnel wall has moved this could be a sign of damaged support structures in tunnel or a coming cave in. Thanks to the Ventech an early warning would be given and extra safety measures can be taken.

The core idea to improve the ventilation was to use pressurized air to isolate the fumes from spreading. In order for that to work air also needed to be extracted to avoid creating a possitive pressure in the tunnel forcing the fumes to spread into the rest of the mine. By creating a blocking air-cone wall that would stop the fumes from spreading at the same time as air would be extracted through hoses connected to the main ventilation system a much more efficient ventilation system could be managed. In order to test this idea a schematic experiment was carried out in a 1:20 scale model of a mining tunnel. To simulate the blast gases a quite thick smoke was required and for this a smoke machine was used. The experiment was conducted primarily to visualize and try out the blocking turbulence created by the “air-wall”. By extracting more air than adding the overall movement of fumes would come from the open end of the tunnel towards the point where the negative pressure was created. In the experiment pressurized air was used for the “air-cone” wall. Nozzles was lethed to create the correct cone profile. An industrial vaccum cleener was used for extracting air. The experiment was filmed for further evaluation. (Shortly described in the included movie. For full length project videos click the links in the included project PDF)

Since this solution would need to be mobile some kind of vehicle became the design topic. The vehicle would be driven to the closest infrastructure docking station where it hooks up and starts approaching the blast site. The volume of gas produced after a blast is known, and also the tunnel dimentions and therfore also the distance from the blast where the vehicle should stop and start ventilating. Ventilation starts right after a blast when the fumes has reached their full volume. Within a fraction of the previous ventilation time the job is done the work can continue in the mine.

The initial sketching aimed at finding proportions and possible mechanical solutions. It was a way of getting acquainted with the type of components and sizes that would be necessary. Detailed research was done in order to get a good picture of how much space various components needed. When the layout of the vehicle started to come into place more detailed sketching was done to find an attractive and credible expression. The sketching stretched from post-it doodles to marker sketches to Keyshot and Photoshop mixed renders. The aim was to find a certain lightness but still robust look. Compared to the many other mining vehicles that deals with a lot more rough tasks this vehicles could be considered to have a slightly more delicate expression. It was also natural to give it a relatively high ground clearance since it would be on site directly after a blast, before smaller rocks that has spread in the tunnel has been cleared.

In order for the vehicle to have a good reach in the mine a quite big amount of hose needed to carried on the vehicle. Since the tunnels varies in length the hose also needed to be extendible to variuos lengths. Different types of solutions was tried out. Hose modules of 30 metres each was considered as well as a collapsible solution where metal wires would run along the sides of the hose and then retract and collapse the hose as the vehicle backed out. However the final solution was a brand new idea where the hose is divided into an upper and one lower part. This enabled a dynamic range extension as well as a compact storage on the vehicle. The profile was designed to be elliptic with a flat side on top and a flat side on the bottom. This way the bottom part could be a thicker, more durable fabric and the top one could be a thinner space saving fabric. The two parts would connect through an air-tight zipper. This is a durable solution commonly used in the diving industry and would suite well for this application.

Rough mock-ups, sketching and CAD-modelling was done parrallell to test proportions, details and packaging. When the final design was set a physical model in scale 1:20 was made and painted. The parts were primarily made by hand but also laser cut and the main body was milled in two pieces.

The Ventech has arrived to the fumes and started ventilating. As it entered the tunnel it started to measure the tunnel profile to make sure no deviations that could be a sign of a coming cave-in occurred. The fumes gets blocked by the air-cone and are ventilated in a concentrated state. Due to intensive local ventilation, hauling out the ore can start already 30 minutes after blasting instead of the usual hours spent waiting for the main ventilation. Major energy saving are made at the same time as productivity increases dramatically while safety also is improved due to the feedback about the integrity of the tunnel walls.

The final design was the vehicle Ventech VU 15 that has an innovative fan solution that manages two directional airstreams - one for extracting fumes and one for creating a pressurised air wall. This is thanks to double angled turbine blades in the fan (see section cut picture). The Ventech has a new dynamic range hose solution for flexible usage at various distances in the tunnels and laser measuring of the tunnel profile integrity after a blast. The fumes gets isolated in the tunnel and can be extracted in a concentrated and time efficient way. The previous up to 24 hours downtime is shortened to an estimation of less than one hour of intensive, local ventilation while at the same time securing the tunnel for work with humans present at the site. The final presentation of this project was held at Umeå Institute of Design where representatives from LKAB, Atlas Copco and Swedish radio (SR) were present. The concept was very well received from both LKAB and Atlas Copco which thought that the ideas has great potential in developed countries as well as in other parts of the world to make mining a safer, more environmentally and productive business.