Effectively seal of a hazardous area, to assure a safe work environment.

This project explored possible concept solutions that construction workers can benefit from in their daily work. The project focuses on the end user and connected devices, Internet of Things.

Research found that workers didn't use some of their current safety equipment for preventing accident. This applied particularly to traffic cones.

Because of the traffic cone's size and the amount of them needed to seal of an area, they are too tedious to set up. Especially if this needs to be done 2-5 times a day.

A solution where the user effectively can seal of a hazardous area, to assure a safe work environment. 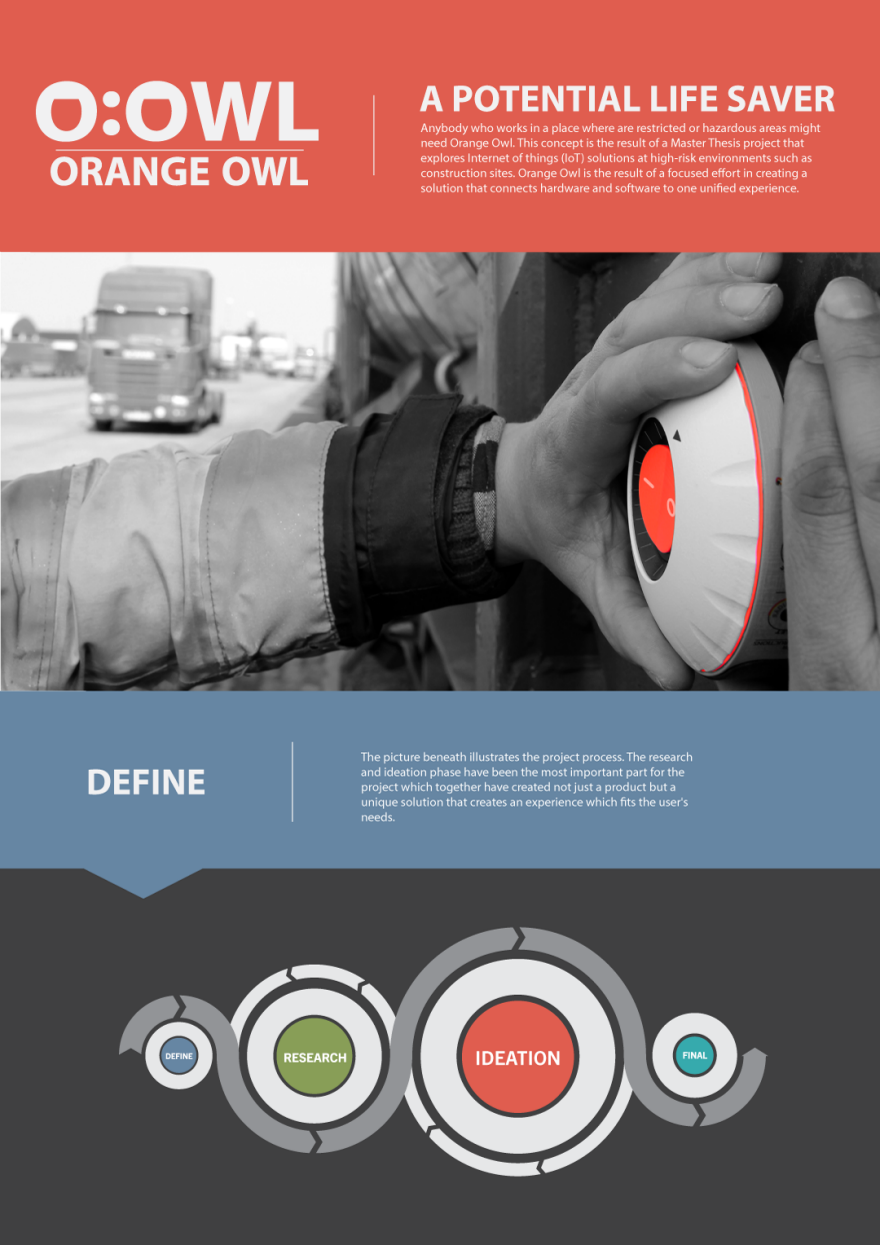 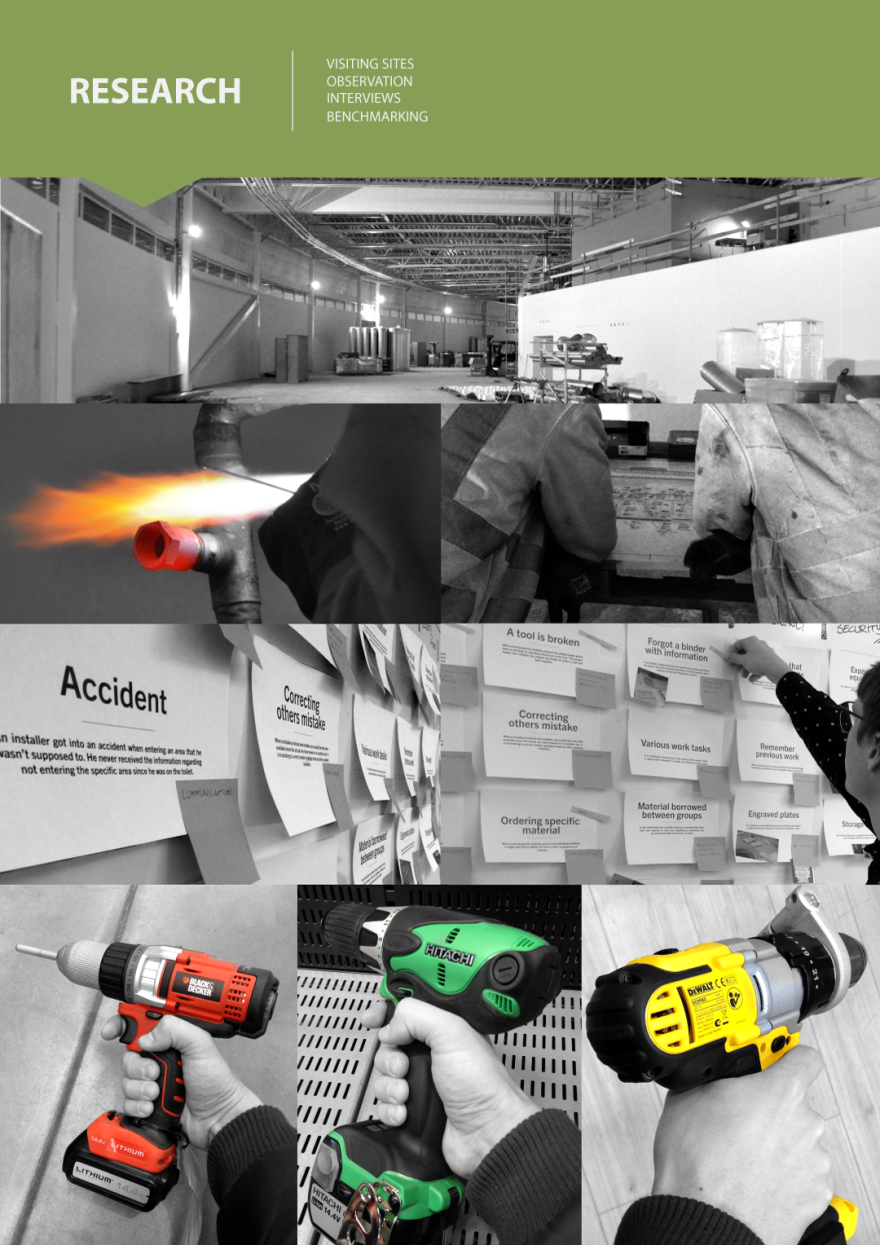 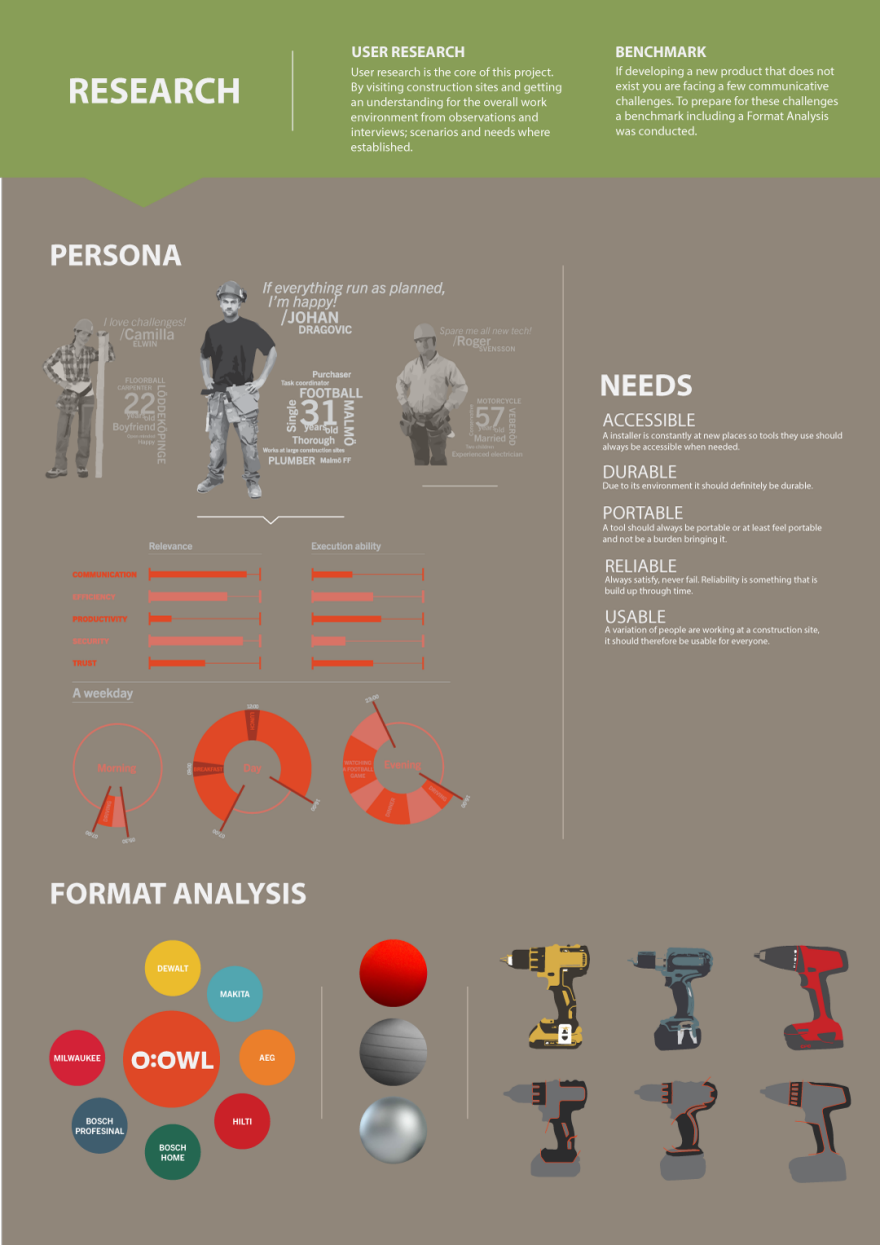 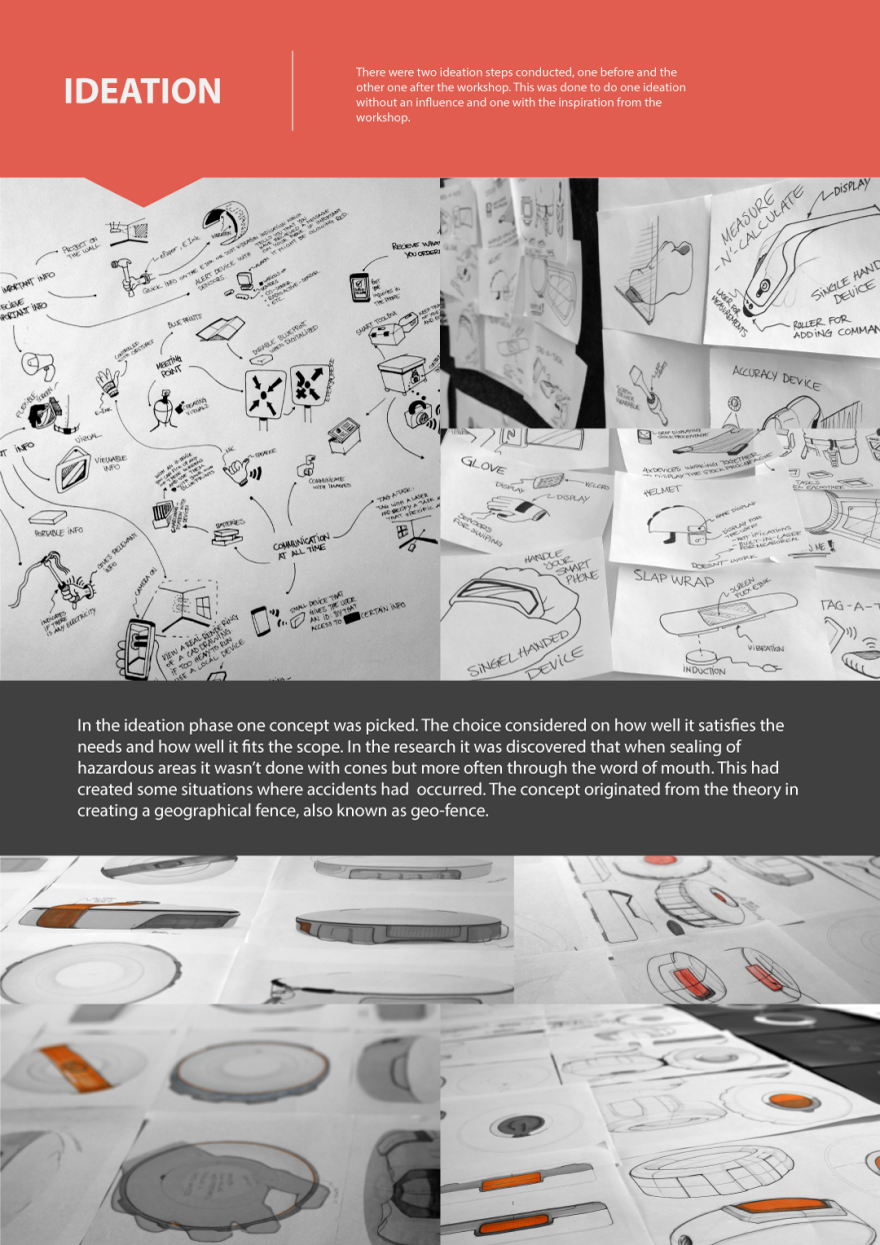 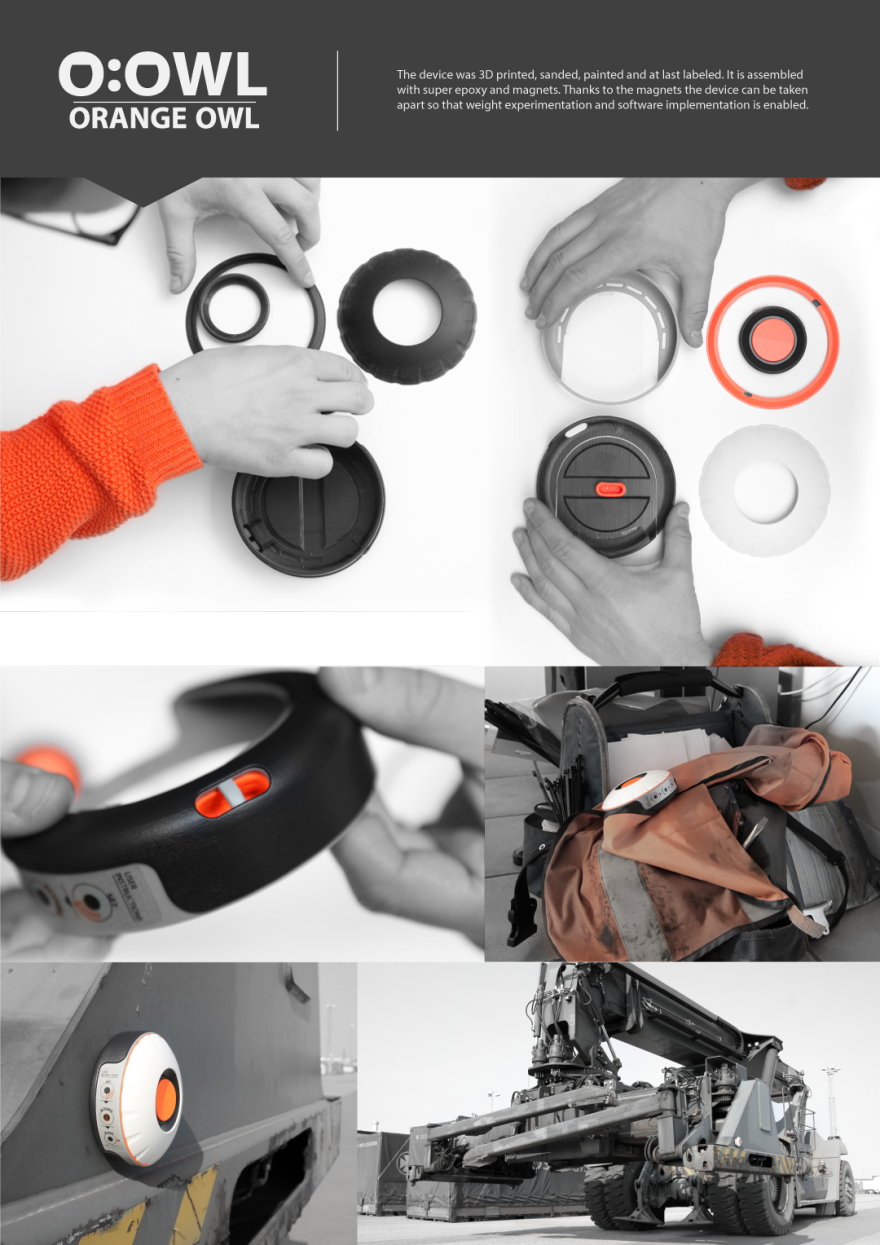 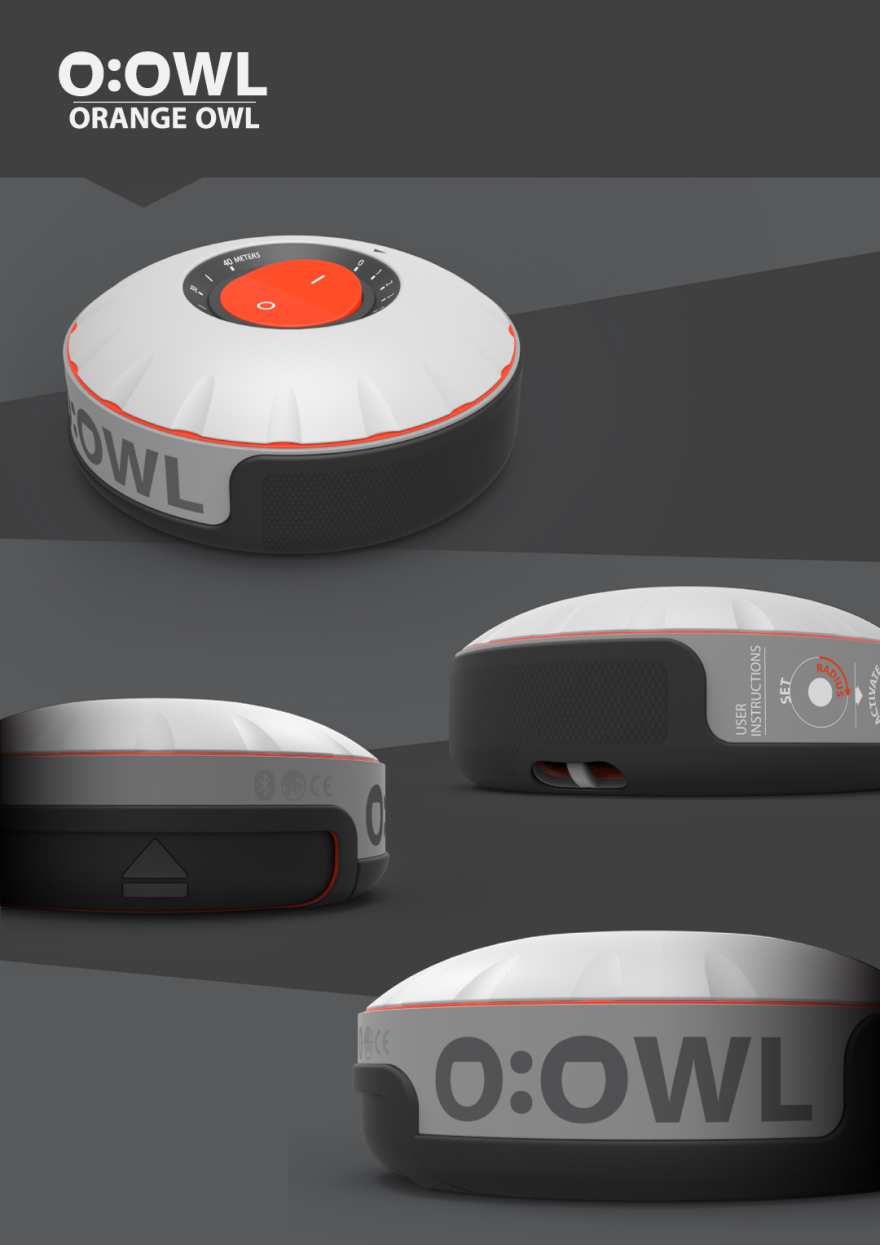 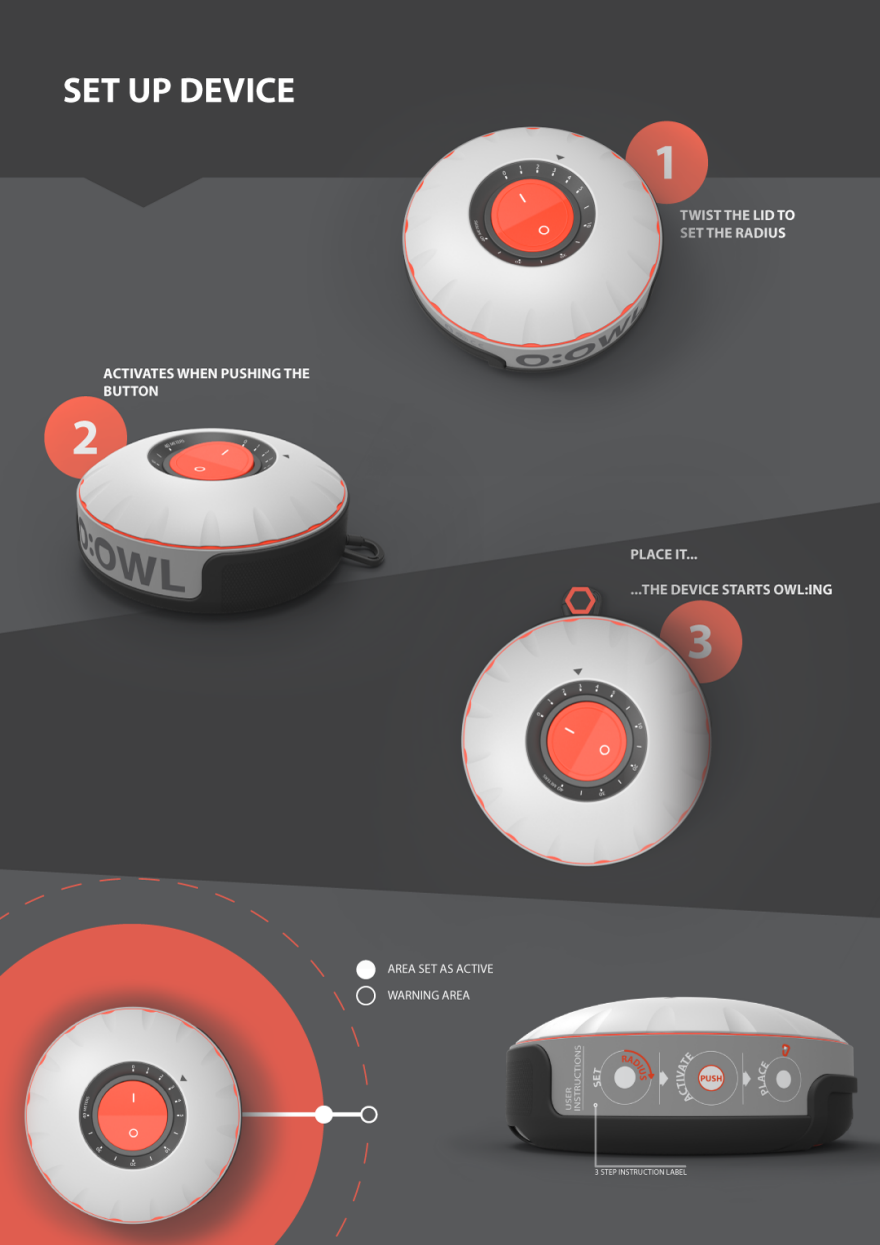 This project follows a tailored process that consists of four steps; Define, Research, Ideation and Final. The following content explains the methods and tools used to carry out the project. Under each method and tool the content describes why and how it was conveyed.

The project’s question at issue is; what are the possibilities for blue-collar workers as a user group within Internet of Things?

The project started off with establishing a project plan. The plan consisted of goals, delimitations, responsibilities, process and a time schedule. The process, figure x, shows four steps; Define, Research, Ideation and Final. The process is created to fit the expected result, which was on a conceptual level. The research and ideation part is an iterative phase so that the final result closely meets and fulfills identified needs of user research.

The project originated from the term Internet of Things with blue-collar workers as the end users. The literature study on IoT and its affiliated terms was conducted early on. Data was collected mostly on the web but also from persons working within the field of Internet of Things.

Blue-collar workers are the primary user group. Since this group consists of a variety of different people an usability approach was taken and a literature study on product experience was conducted a long side of the project.

Observations and interviews was conducted by visiting two sites, one construction site and one service site. A verity was pursued to convey an understanding for different type of sites. On the construction site each person often had enduring tasks and was not moving around much. At the service site workers moved around, a lot more, to different locations in one day since the work tasks was less time consuming but more in number.

A direct unsystematic observation method was used since the goal was to collect quantities of unspecified data.

The observation was performed following the installers around and passively participating in the daily work. On this site the installers where welding and mounting pipes. Great care was taken to not only observe detailed situations but also to get information about the overall working process, such as how they communicate.

At the service site the observation followed electricians who worked at a newly facilitated hospital. This was at the end of their project so most of the tasks that were conducted consisted of smaller operations where each took about 20 minutes.

The semi-structured interview that was conducted was in most cases regarding work conducted at that specific moment. Some focus was put on issues regarding failure, such as accidents.

Personas and scenarios were used to illustrate the users and their working situation. The main focus was to establish a variety of personas, not to fit everyone’s need but to get an overall understanding for the user group that is going to be the end user. Scenarios where created based on typical events during a day at work. At this stage all three personas were primary users. With the personas different personalities, age, gender etc. they are supposed to cover the total range of the encountered users during the user research. Fitting the personas into scenarios set a context for the upcoming ideation phase.

When data has been collected it is of interest to convert it into understandable information. A good way to do that is by sorting the information and putting it under different categories. A suitable method for this is the KJ-method. The method was used in collaboration with external people to get an objective opinion. The data that got sorted was a summation of situations and scenarios where there were shortcomings.

KJ-Analysis is a method for categorizing data into groups. When clustering data into groups it is easier to interpret. KJ-analysis is carried out by putting data on notes that are spread out. By spreading the notes one enables an overview that is suitable for getting an understanding of what data suits with what. By conducting the exercise in a group different opinions are shared, which contribute to an objective result.

Both the needs are equally important but play different roles during the product development. The first group is used early on to identify a suitable product that satisfies the needs. The second one is to establish the suitable qualities and features for the product.

Three moodboards were created to establish a vision of what the final result should express. The moodboards are inspired by data received from the benchmark. By producing them a visual goal was produced early on with the main focus of communicating an experience.

Benchmarking was conducted both for the construction industry and Internet of Things. The information was gathered on the web and in retail stores but also when conducting the field research on the construction sites.

A design format analysis was conveyed but since the project does not address a specific brand the method had to be modified. The goal with conducting the method was not to get an overview of how a specific brand markets itself but how an industry is marketing itself. This was done by using the method on power tool suppliers, and focusing on the cordless screwdriver. The following brands where analyzed; AEG, Dewalt, Bosch Home, Bosch Professional, Hilti, Makita and Milwaukee. The screwdriver is picked to be analyzed since it is located within a market where all the brands are competing.

Design format analysis is a method to analyze a brands visuals so that the values are ensured in the new product’s design. This is done by analyze existing products that are carrying the brand visuals by comparing them with each other and identify their similarities. The outcome from the analysis could be; form, color, material, graphics, and textures.

Through this phase most of the time was spent on generating concepts that were matching the input from the research phase.

The project had a wide ranch of needs and scenarios when starting the ideation phase. This lead to a structured approach where the first ideas how to satisfy the need were written down by using a mind map method. This was conducted before performing a workshop, with the purpose to avoid influence from ideas generated during a workshop.

A workshop was conducted during one day and divided into two different sessions. The workshop took place at a company where most of the participants work as software developers. There were approximately six participants in each session and they took only part in on session each.

With concepts from both mind mapping and the workshop new ideas were generated. This was done through ideation sketching. Main focus when conducting this exercise was to refine the earlier concepts and satisfy needs.

A storyboard was produced to create and build a scenario that illustrates the need which the product satisfies. It is made out of sticky notes and ordered in a time line that goes from left to right.

Generating CAD models was done for several purposes; for quick surface renderings as underlay when sketching, renderings for final visuals and at last CAD files for rapid prototyping. The CAD program used was Rhinoceros 5.0.

Since working in CAD it is hard to imagine the dimensions in reality. Both overall dimensions and detailed dimensions, such as button were created.

The final phase was spent on finishing the result so that it is delivered in a thorough way that enables information and knowledge distribution.

A 3D printed prototype was produced at the end of the project. The prototype enables an understanding for the interaction that is perceived as if it would be a working prototype.

Visual communication in an early stage

Since the project result is an innovative new product it is important to take action so that it easily can be communicated in an early stage to illustrate use cases and technological features. This was done by creating a video that could stand alone without any further information. The film was animated in KeyShot 4 and edited in Adobe After Effects CS6.