On a chaotic battleground, a medic locates a wounded soldier, his hips soaked with blood. There’s a firefight in progress. The medic knows there could be less than 90 seconds to staunch hemorrhaging before the soldier dies, and yet his wound is in an impossible-to-tourniquet location. This hypothetical situation is exactly what RevMedx’s XStat is designed to deal with, in the real world.

RevMedx developed this new first aid solution by combining an advanced hemostatic compound with tightly compressed cellulose sponges. Together, these two technologies can soak up blood and apply pressure to deep, non compressible hemorrhages, stopping bleeding in seconds, even when an artery is ruptured.

They asked us to design a way to deliver these pellets deep inside wounds – fast. This was RevMedx’s first product and they wanted to be sure their revolutionary medical advance had the absolute best delivery mechanism. The XStat applicator functions like a large syringe and is a simple, fast delivery mechanism for these sponges. XStat’s collapsible plunger is activated with a quick upward pull, and a perforable silicone membrane keeps sponges secure and sterile until deployment. Three XStat applicators nest together inside a sterile pouch – easy for medics to carry, and enough to stop bleeding in the largest wounds. Testing shows fifteen-to-one reductions in the time XStat takes to stop bleeding, which means more soldiers returning home to their families. 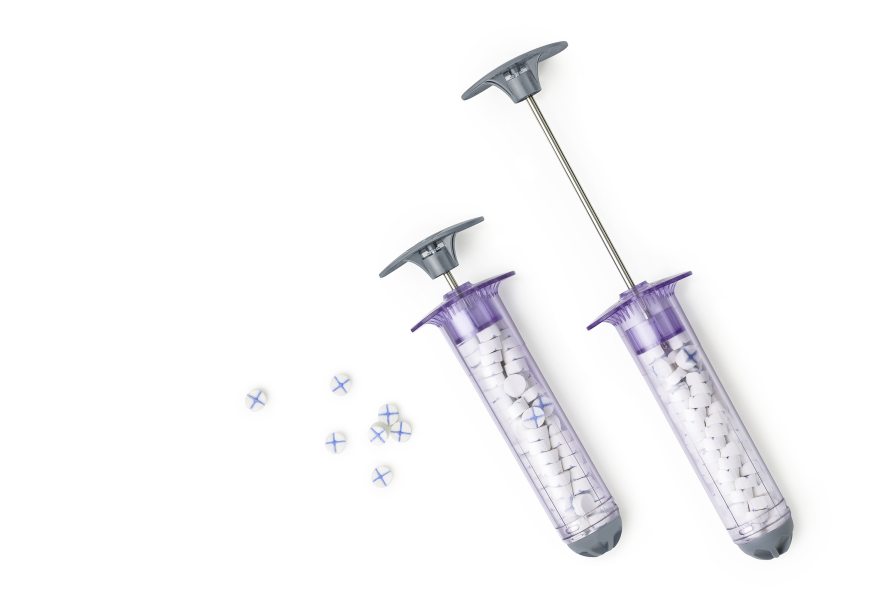 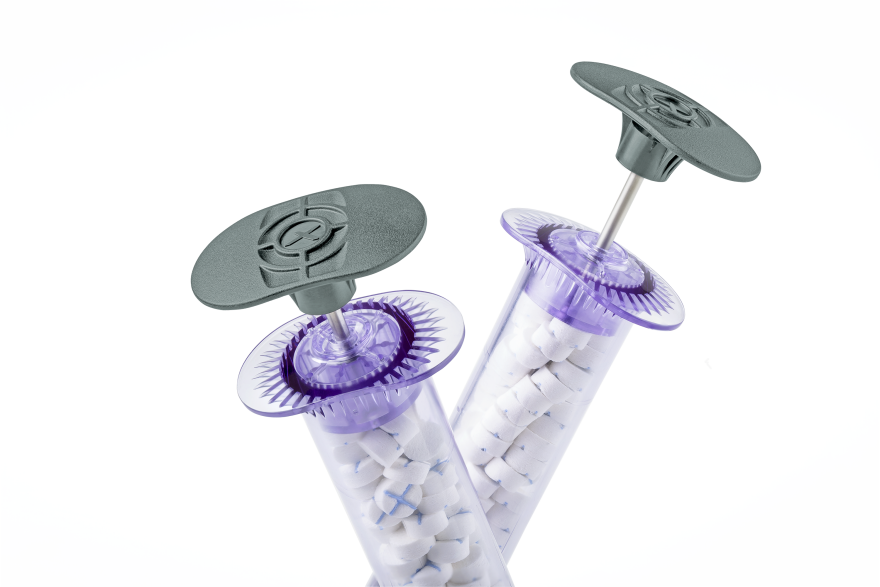 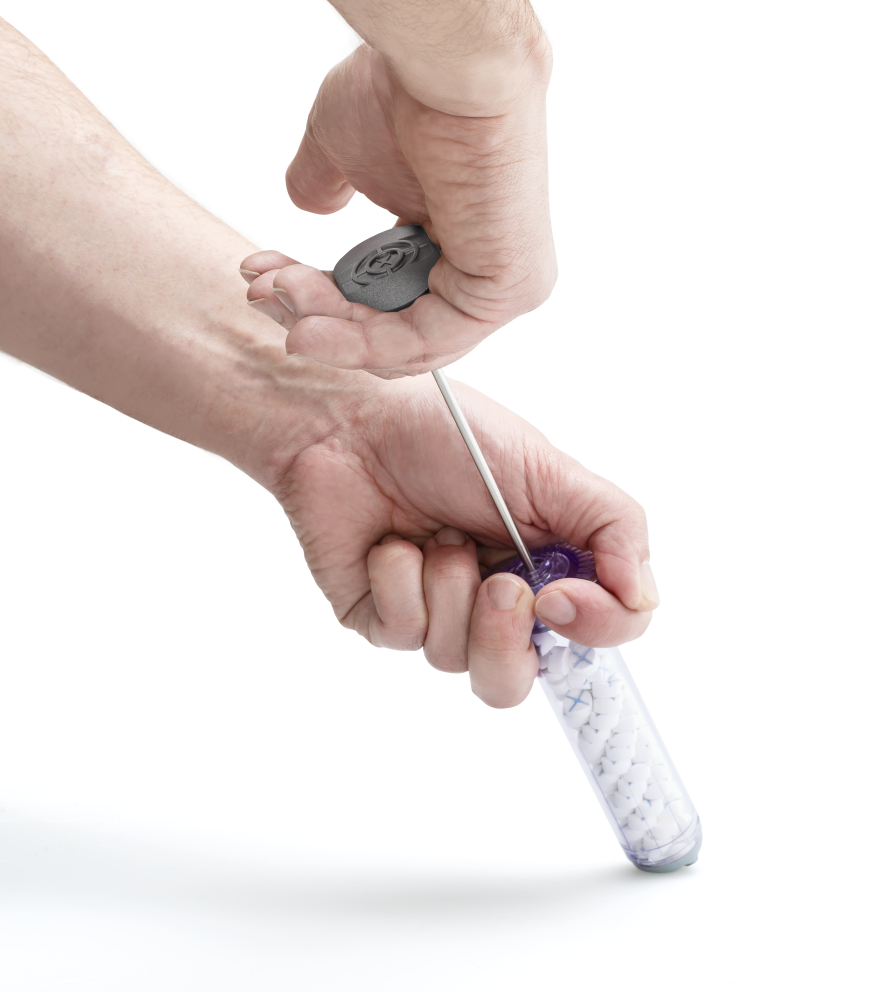 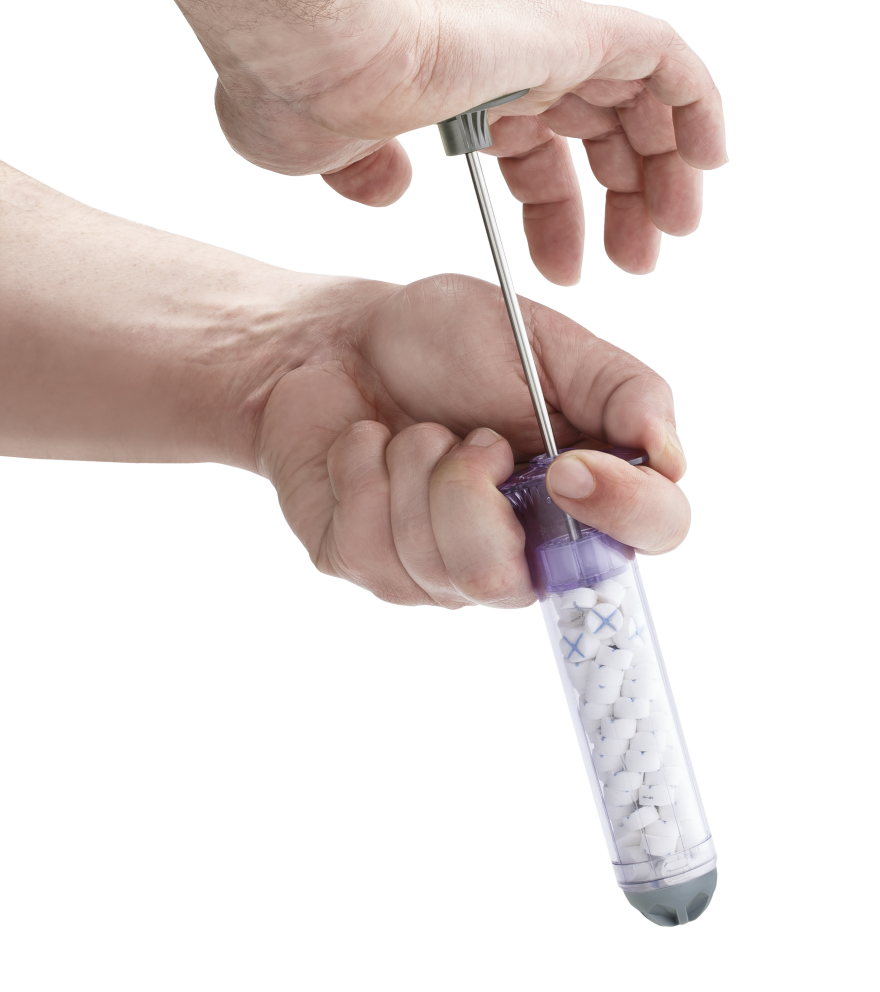 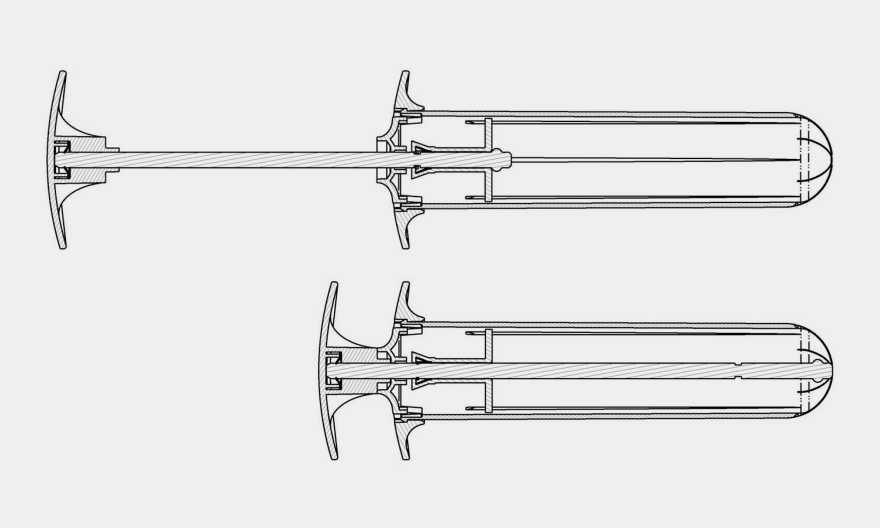 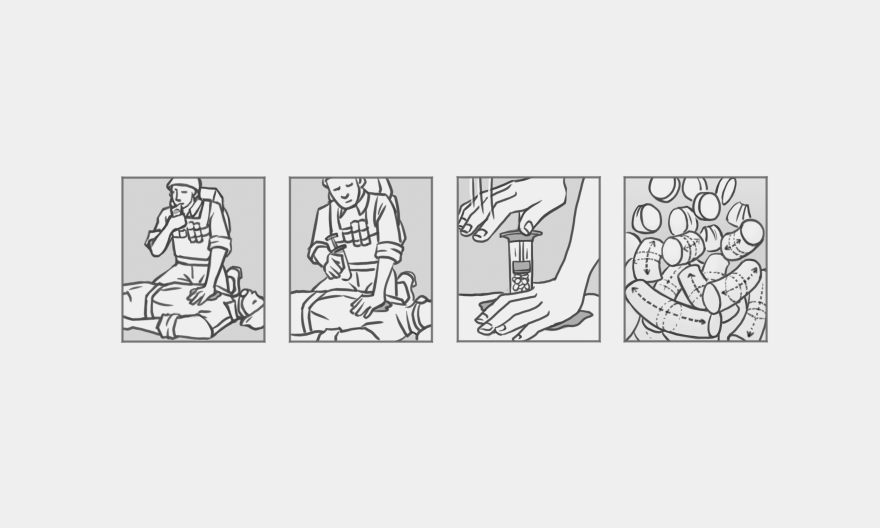 Bleeding to death remains a leading risk for soldiers on the battlefield despite body armor improvements. In fact, injuries from bullets and shrapnel at armor junctions left the US military struggling to deal with an increase in ‘non-compressible hemorrhages;’ tourniquets wouldn’t work. Bleeding like this, from deep wounds around the hips and shoulders, can lead to death in under 90 seconds.

Military medics wanted a “fire and forget solution – essentially Fix-A-Flat® for wounds,” according to John Steinbaugh, a retired U.S. Army Special Forces medic who now serves as VP for Strategic Development at RevMedx. By combining a hemostatic (blood-clotting) compound with compressed cellulose sponges, RevMedx developed a new solution that could rapidly absorb blood and expand to apply pressure within the wound, stopping bleeding in seconds. And while RevMedx had never brought a manufactured product to market before, they saw huge potential in this innovation – what they needed was a way to deliver the sponge pellets deep inside wounds, even in the heat of battle.

The XStat applicator faced considerable challenges – RevMedx asked our designers to picture “the worst operating conditions imaginable.” Beyond their urgency, these situations involve unpredictable and ongoing violence, darkness, and extremes of weather, to name a few. This called for an applicator that was absolutely fool-proof, could be used ambidextrously and with gloves on while still assembling near-instantly without the use of tools. It also had to be compact and lightweight enough to fit the space constraints of a military medics’ pack.

Given the tight functional constraints, we were fortunate to have actual end users on the project team. Involving military medics in testing at the prototype stage ensured that their feedback and observations could effect real changes on the final product. RevMedX’s VP for Strategic Development is a retired medic in the US Army Special Forces, and consulted with the design team throughout the development process, pointing out key considerations that insured the applicator could meet the demands of real world, battlefield use.

Working closely with RevMedX’s production facilities in Wilsonville, Oregon, we prototyped and user-tested dozens of mechanisms to ensure the applicator worked exactly as needed. This extensive iteration, and the familiarity of the syringe form factor, ultimately paid off: after receiving only minimal instruction, ten out of ten military medics were able to successfully deploy the final prototype XStat applicator in less than a minute and a half during testing, with most completing the task in 20 seconds or less.

For materials, we selected clear polycarbonate for the applicator because of its light weight, strength and transparency, and silicone for the perforable membrane, because of its flexibility, durability and smooth finish. Both materials are commonly used in medical devices and disposables, making them obvious choices for the XStat.

The expanding sponges themselves, in addition to using a hemostatic agent that improves their ability to stop blood flow, are marked with X-shaped threads that are visible under x-ray, to ensure complete removal once a wounded soldier is safe at the hospital.

Once the design was finalized, we handled engineering and production oversight for RevMedx as well. This logistical support was crucial to the viability of the new product, getting XStat to market as quickly and cost-effectively as possible.

In the longer view, stakeholders for other versions of the XStat (currently in development) include Emergency Medical Technicians, police, firefighters – and ultimately anyone who suffers a life-threatening arterial wound or hemorrhage.

Short of affecting causes of strife, the most important thing a designer can do for conflict-stricken part of the world is offer tools to minimize the likelihood of death. XStat addresses very real problems: increased use of improvised explosive devices that cause deep arterial wounds, and far-flung battlefields that put medical treatment further and further away. In situations like these, the ability to stop profuse bleeding can literally make the difference between life and death.

Because of this, XStat has received considerable attention from far beyond the military medical and first-responder communities, with writeups in publications from Wired to the Daily News, appearances on PBS News Hour and CBS This Morning, and a Popular Science Invention Award win. Even papers like the Wall Street Daily have taken note, commenting that “RevMedx’s patent-pending products will serve as the latest proof that simple technology can be truly disruptive.”