SOLATO P15 is a revolutionary made-to-order countertop gelato machine, designed for commercial use. In less than 60 seconds, P15's unique technology freezes the content of a capsule full of the finest ingredients, resulting in the freshest and smoothest gelato and a variety of other ice treats like frozen yogurt, sorbet, ice cocktails and ice coffee.

The P15 is SOLATO's first commercial product, based around a singular innovative freezing process and a unique digital control. The P15 with its immediate production of fresh frozen treats brings people closer to the art of crafting delicious and freshly made gelato.

The P15 is built around a unique single-serving capsule which enables SOLATO's distinct made-to-order fresh gelato business-model. Each QR-coded capsule contains 100-120 grams portion of liquefied ingredients. When these are poured into the freezing chamber, they quickly freeze and are aerated with a special dasher for the optimal gelato density. Speed and length of aerating are automatically optimized for each capsule type as given by the QR code.

SOLATO's gelato has a pleasing, unique, fluffy, and light texture that melts on your tongue creating an "ice-sensation" unlike any other. The capsules are made of recyclable materials and can be reused as a serving cup, which help eliminate the waste associated with traditional bulk formats.

The compact design of the P15 is geared towards the small business coffee shop of restaurant. It is establishing a design language associated with Luxury and romance of the Gelato. Undulating patterns and round forms are used to create a sustained appeal. It is a narrow and deep object since it is intended for use next to other coffee bar equipment like a commercial espresso machine and such. Footprint on the counter top is a prime consideration!

The display is set at eye-level and made to allow a quick glance for the busy barista. 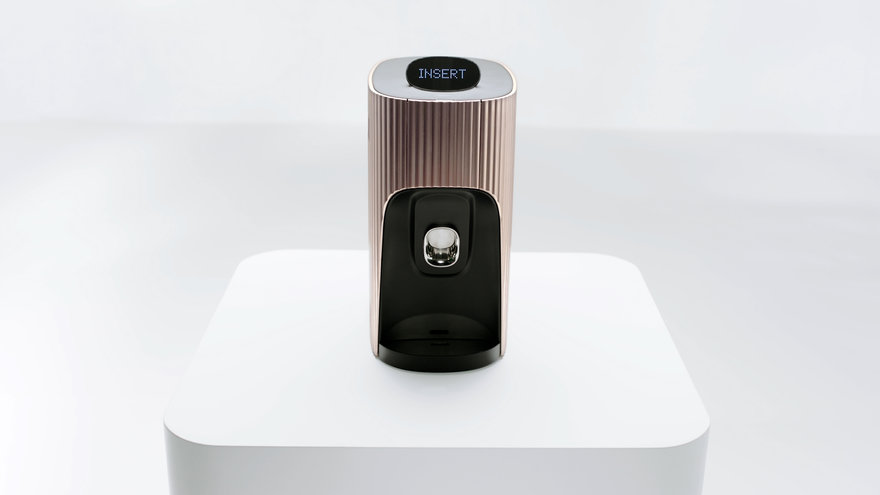 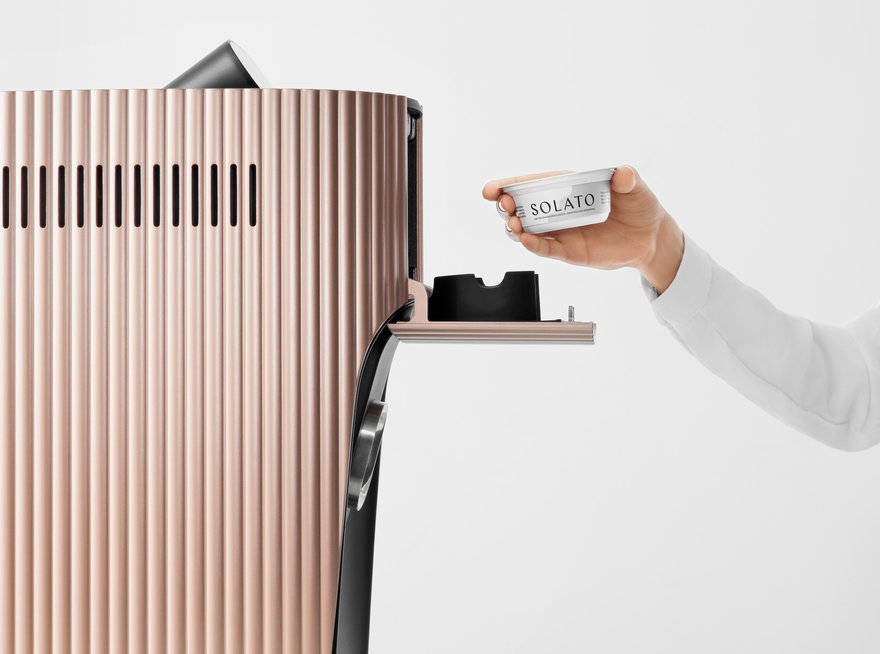 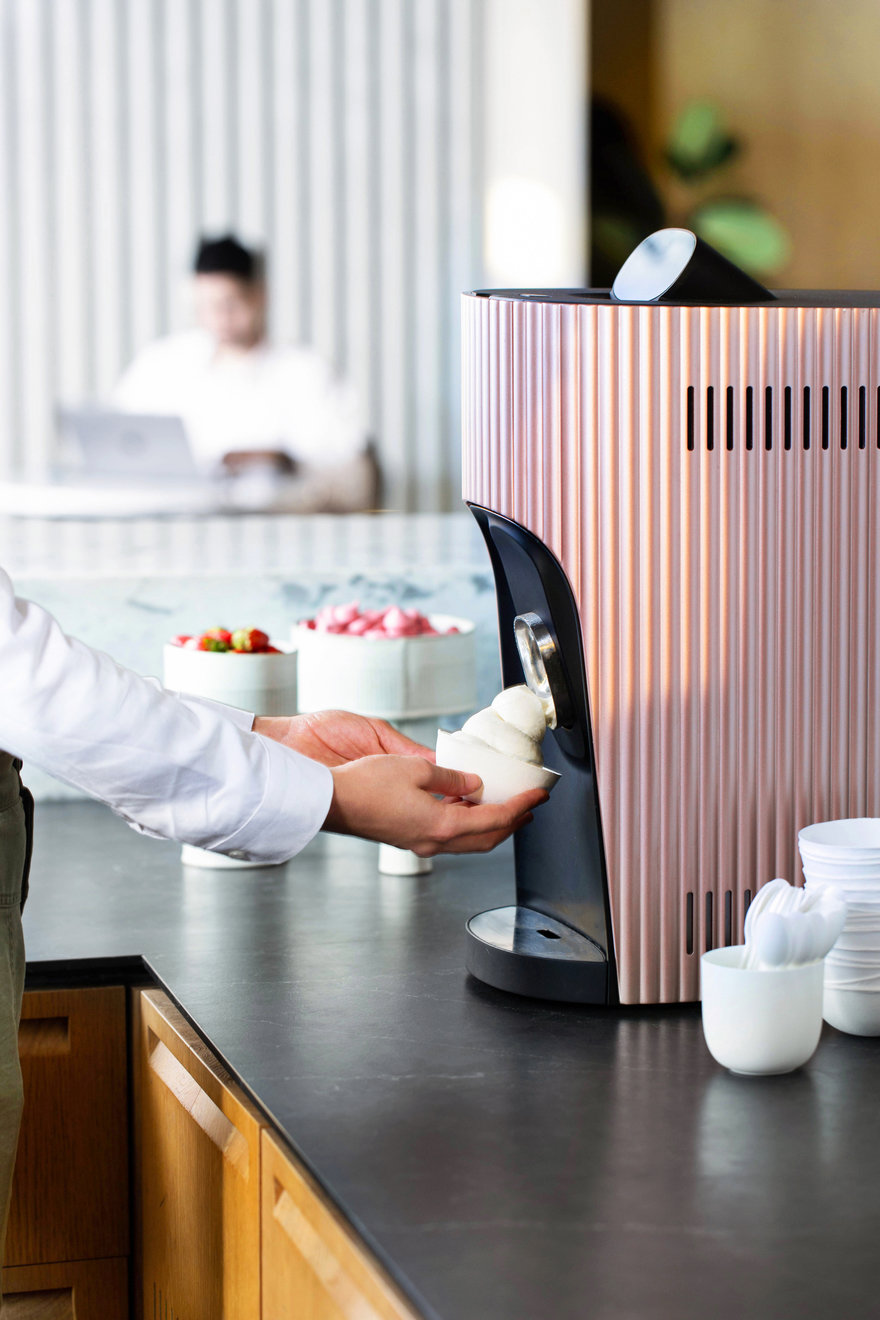 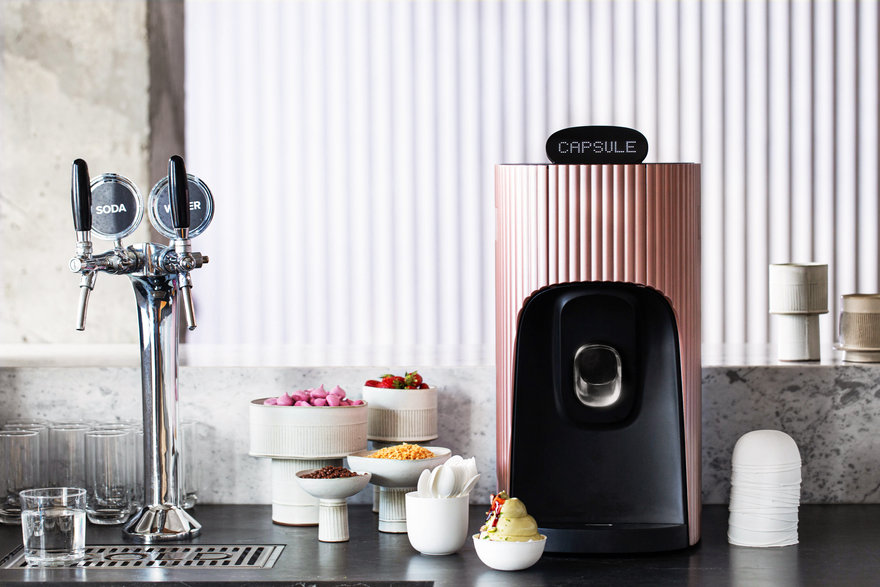 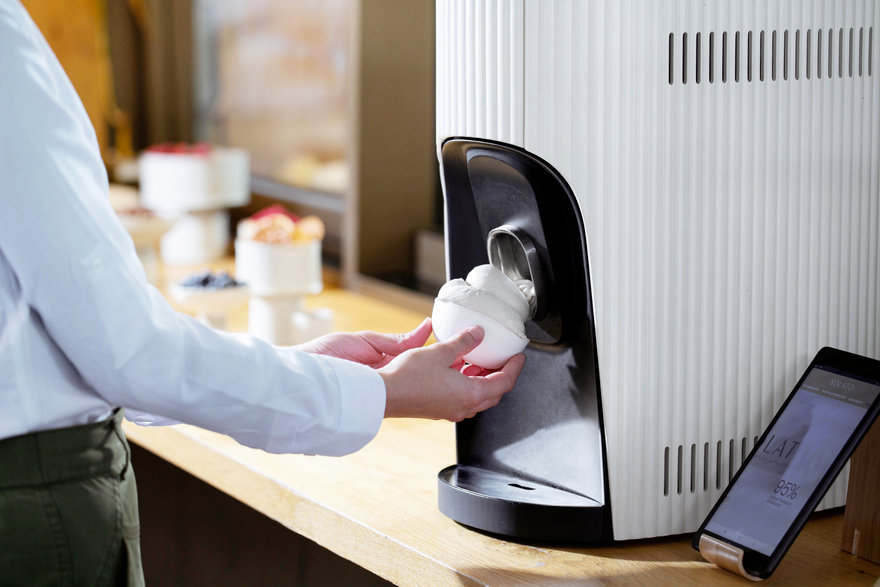 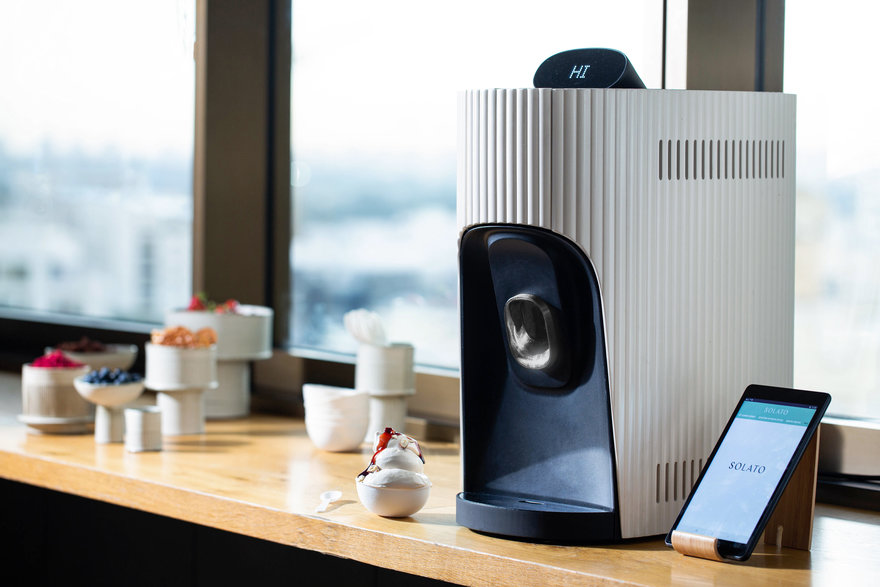 To the consumer of the frozen treat, all SOLATO gelatos use only the finest ingredients with no artificial coloring and flavoring, satisfying the most distinguishing connoisseur. Additionally due to its higher temperature SOLATO's gelato is not freezing the human taste buds, with that allows the product to be tasty without added sugar as done in traditional ice-cream making. At about 170 calories, SOLATO's capsule is reasonable, tasty and healthy treat you could consume every day.

To the employee at the Coffee shop, ease-of-use is one of the top priorities from a baristas' standpoint. They simply insert a flavored capsule of the customers' choosing and the machine reads a QR code automatically optimizing the process.

To the coffeeshop owner, the P15 is an innovation at low costs and low level of commitment - you pay for the Capsules and you get a small, innovative machine that adds unique treats to your establishment.

The P15 features an easy-to-read dot-matrix LED display so at a glance, busy baristas can immediately know the status of the order. At the end of the day, the major parts can be disassembled so that baristas can toss them in a dishwasher for easy clean up.

The P15 is a narrow and deep in its layout for an optimized use of a counter-top next to other coffee bar equipment like a commercial espresso machine, with ventilation designed sideways, interaction only at the front and cables coming only at the back.

Most people would not guess the environment impact of producing ice-cream. Regular ice cream products need to be stored below -25 C throughout their journey from the plant to the store to the consumer home. Sometimes it takes 3-4 months for a pint of ice-cream to reach the consumer, frozen -25 C end to end. SOLATO proposes an environmentally friendly innovation to this traditional industry. SOLATO's capsules only need to be kept around 4 C and will be frozen into gelato just once right before serving.

Additionally, due to its higher temperature SOLATO's gelato is not freezing the human taste buds, with that allows the product to be tasty without added sugar as done in traditional ice-cream making. At about 170 calories, SOLATO's capsule is reasonable, tasty and healthy treat you could consume every day.

SOLATO is designed to fit into modern food businesses that often have various aesthetics styles. The design is simple yet eye-catching to stimulate end-users to spread this new ice sensation through word of mouth. The machine's softly rounded body has a linear texture with hints of a Roman/Italian on its outer shell as a nod to the beautiful Italian gelato culture. Major part break lines and technical details, such as ventilation openings, are blended into this linear pattern making the design more harmonious.