Vermilion Sands is a temporary pavilion for a summer arts festival on West Vancouver's waterfront. It makes an unprecedented use of hydro-seeding, a seed planting method commonly used for large areas like freeway embankments, to create a living canopy that blurs the distinction between nature and artifice and demonstrates a new avatar of sustainable material processes. The canopy structure provides a loggia-like entry to the arts festival's grounds while also offering a cooling shade space in response to the August sun. It is comprised of 260 custom-fabricated modules that are shaped as truncated pyramids. Each module is sewn from a geotextile fabric, hydro-seeded with either white clover or perennial grass, grown in a nursery for thirty days, and then suspended from a grid of aircraft cable on-site. This innovative methodology required intensive collaboration with hydro-seeding and plant specialists and the production of full-scale mock-ups that were test sprayed and grown over many months. The final result is an axial structure that is abstract and pure while also being heterogeneous and biotic. In this manner it is simultaneously futuristic and primitive. The project synthesizes various domains of design inquiry into a unified, haptic space. Geometrically specific geotextile forms enable productive plant growth while achieving particular aesthetic, light and shadow, and solar protection qualities. At the same time, the project achieves a transcendent ambient atmosphere through the pragmatic necessity of artificial lighting and irrigation that is provided with an integrated system of 150 misting nozzles and LED uplighting. Vermilion Sands is the title of a collection of short stories by JG Ballard. In this sci-fi text, each story focuses on a particular design or artistic medium in which nature is hybridized with technology to produce magical results – for example, living fashion and cloud sculptures. Within our Anthropocene, where the ability to disentangle the 'natural' from the 'artificial' is fleeting; we can only hope that the sustainability of the future will be increasingly populated with designs akin to those in Ballard's prescient texts. It is our fantasy that Vermilion Sands the canopy could be set within Vermilion Sands the book. The research embodied in this project, in our opinion, is a significant part of the effort to find the best possible sustainable futures. 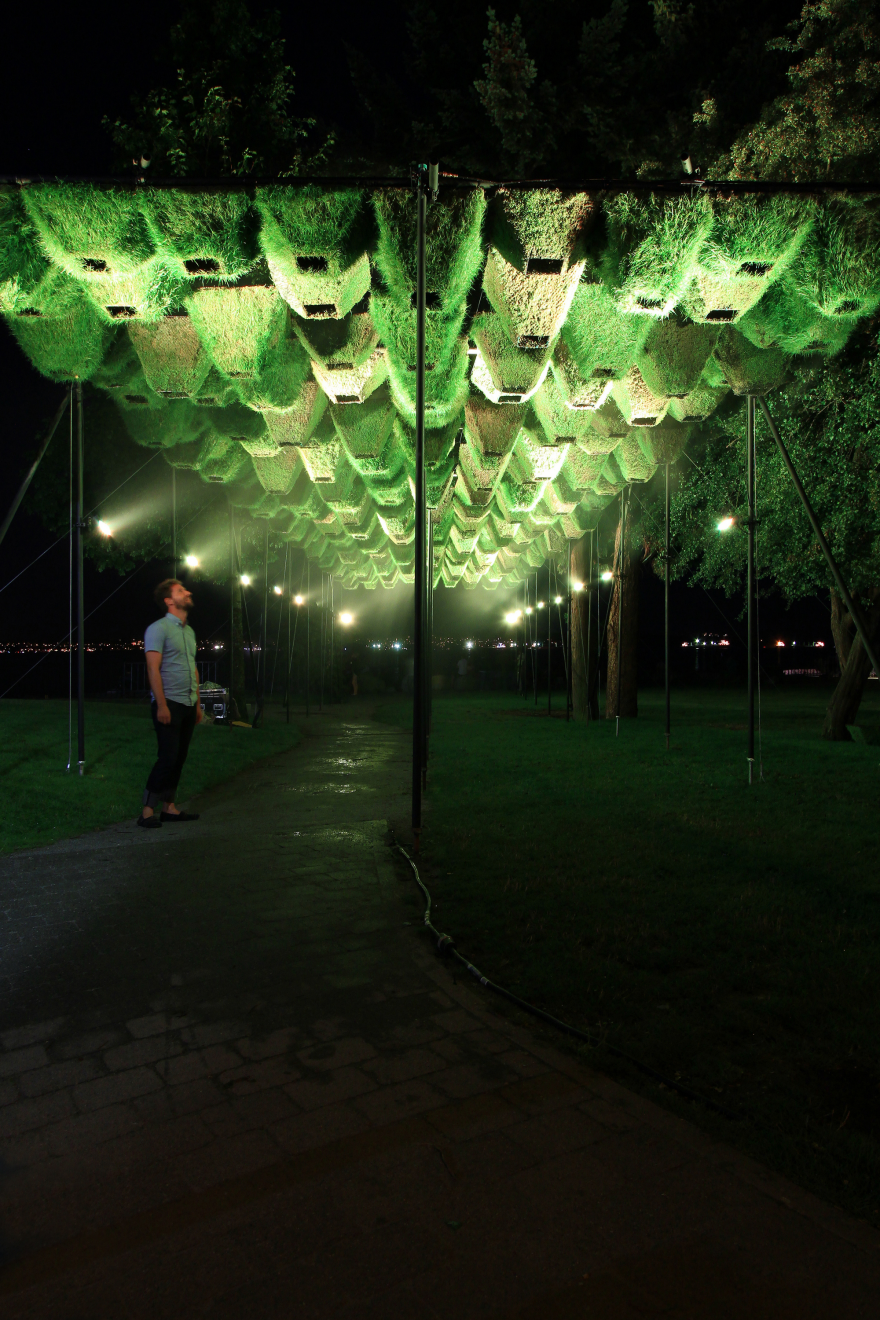 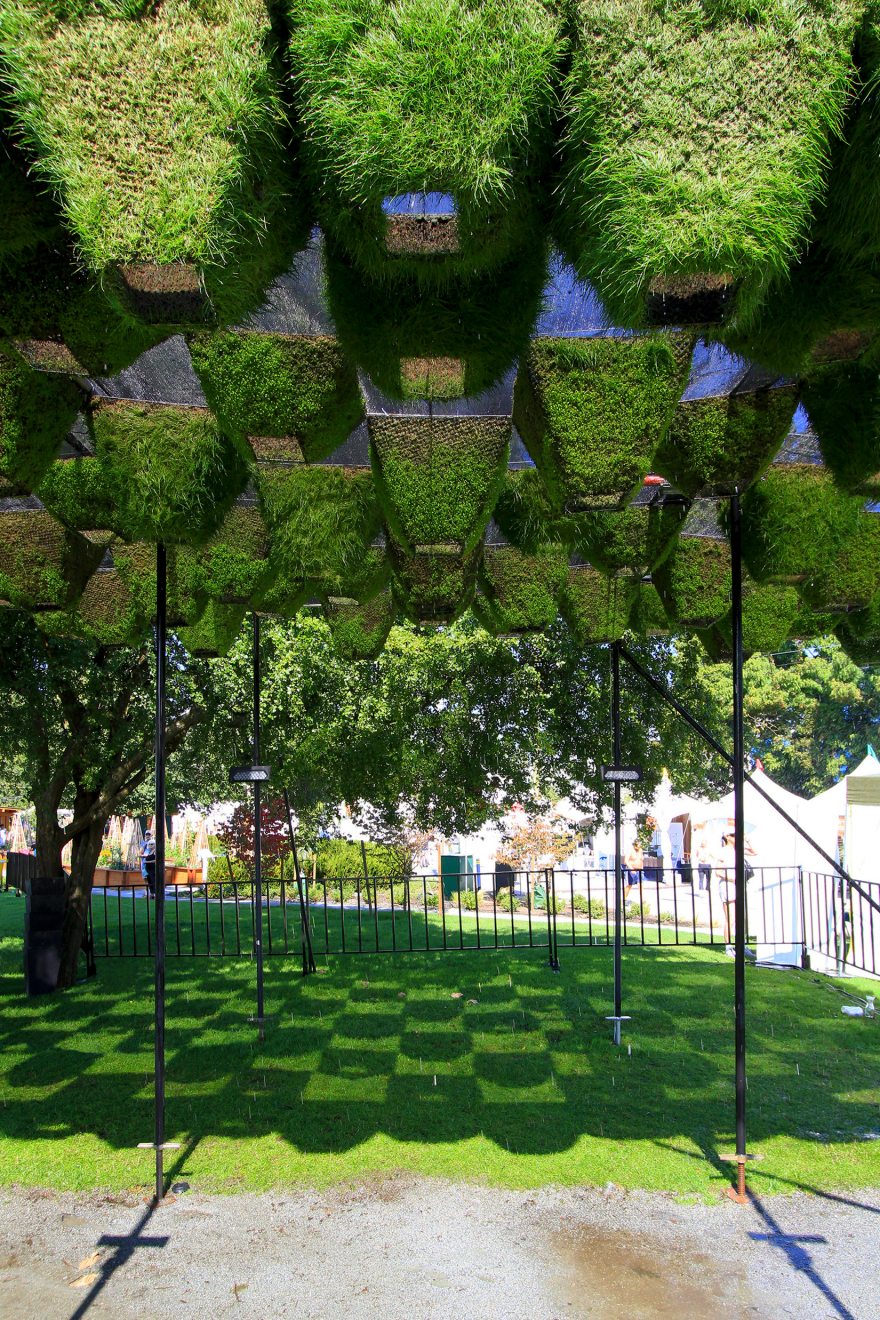 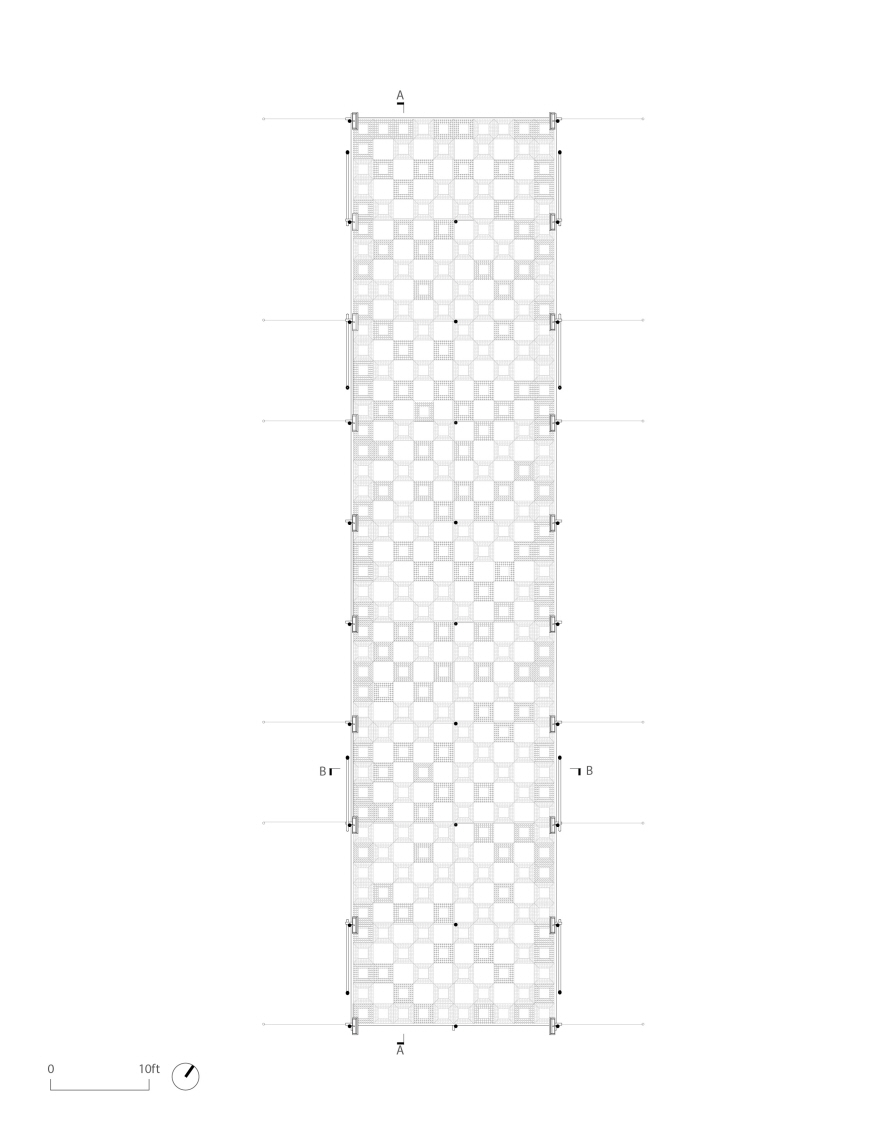 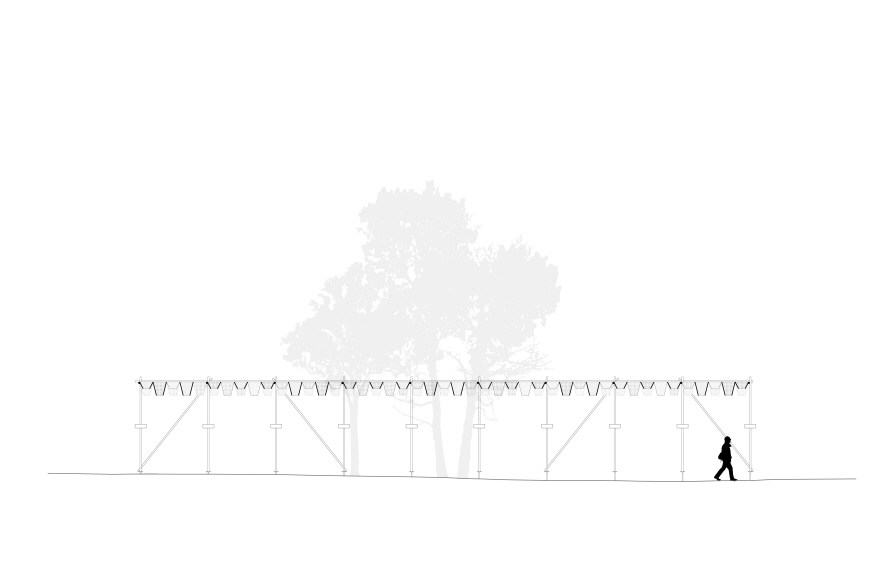 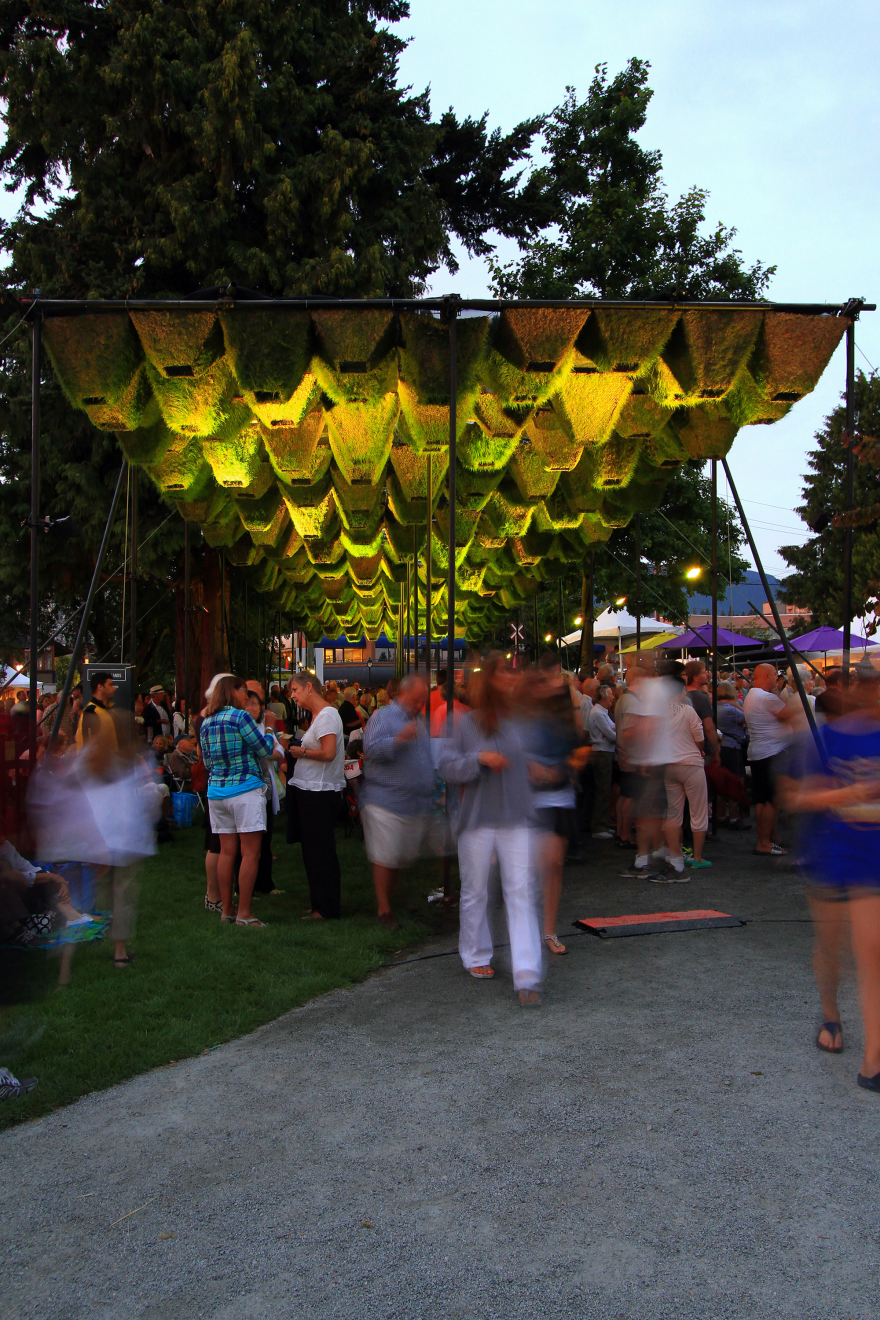 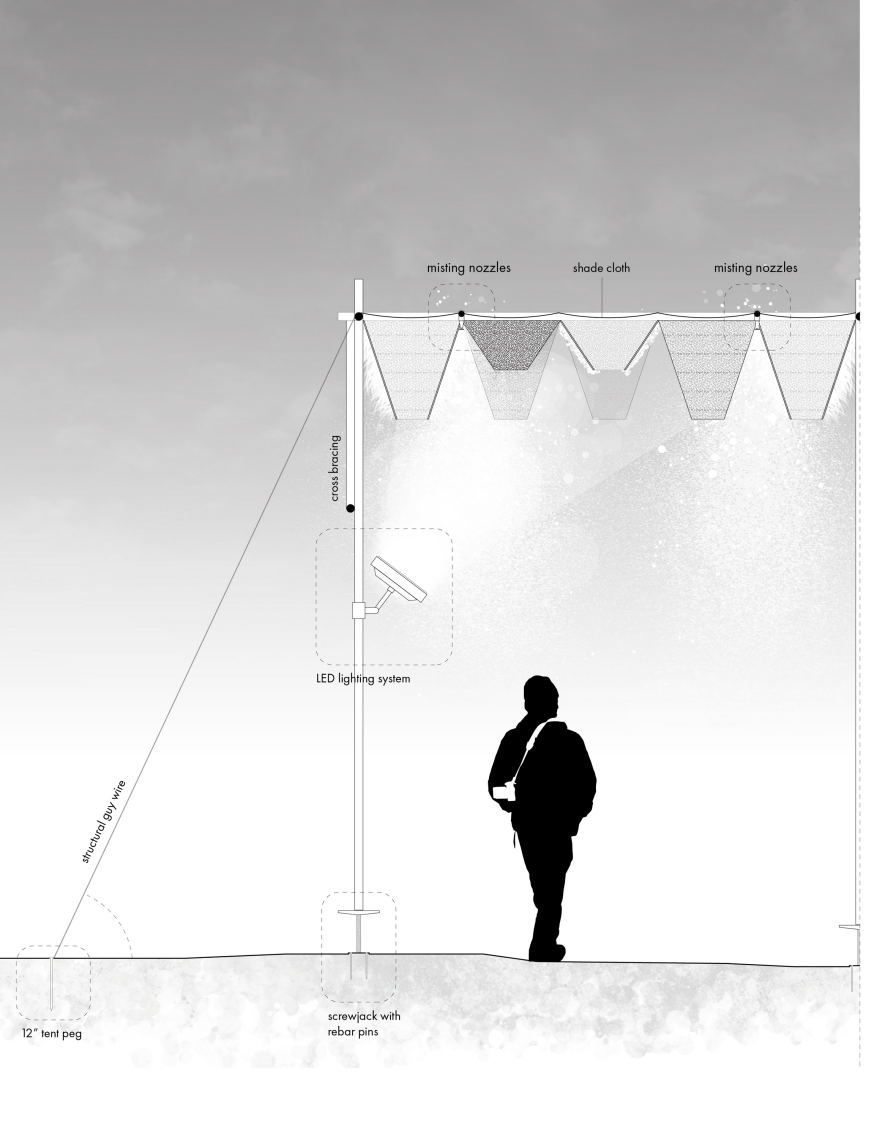 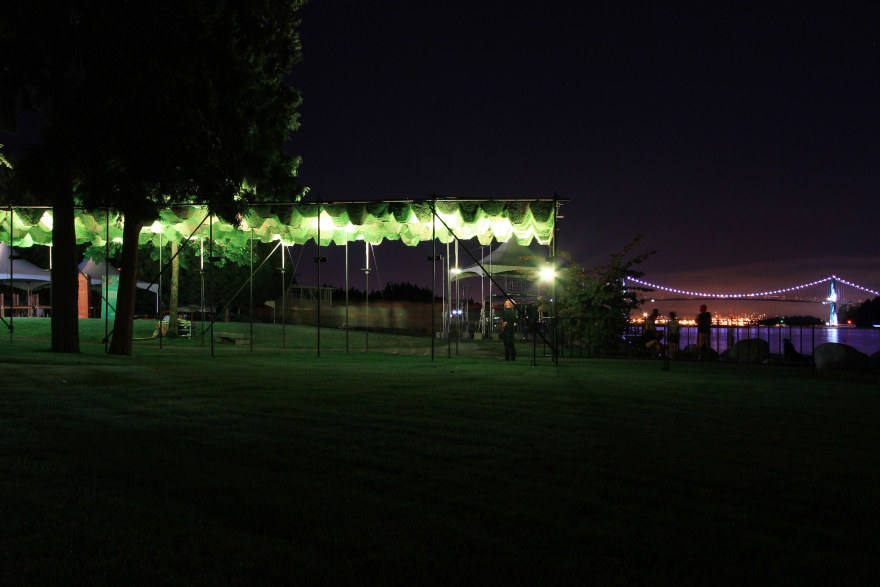 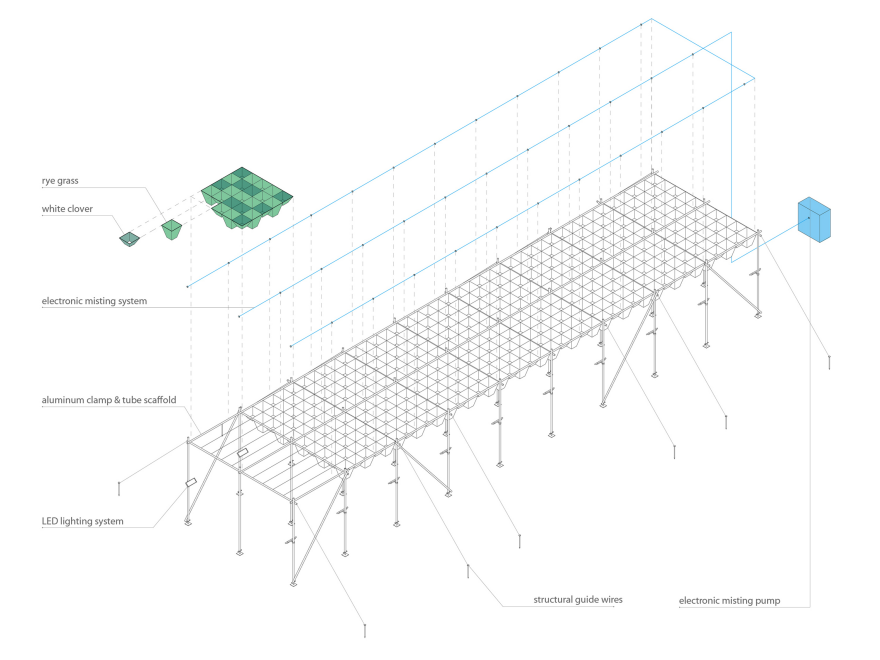 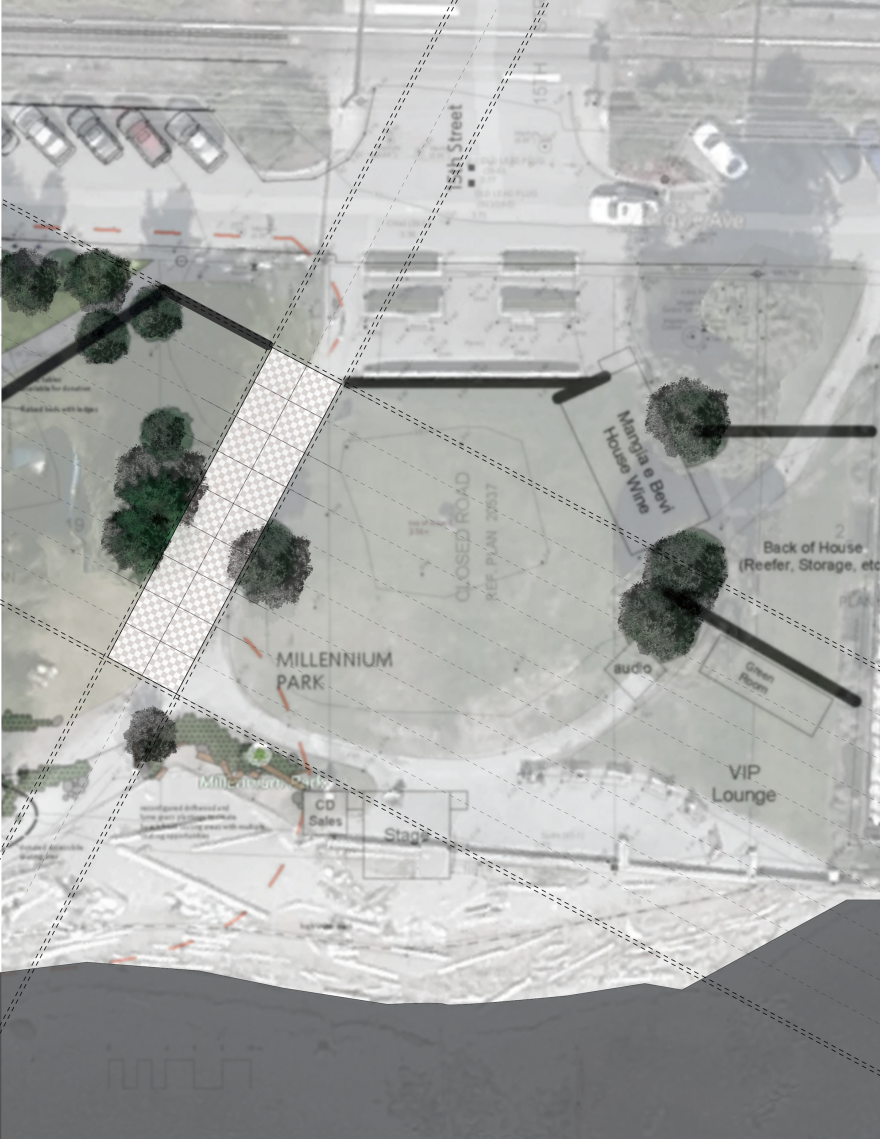 Site Plan The canopy provides both a space to enter the festival grounds and a sheltered social space. 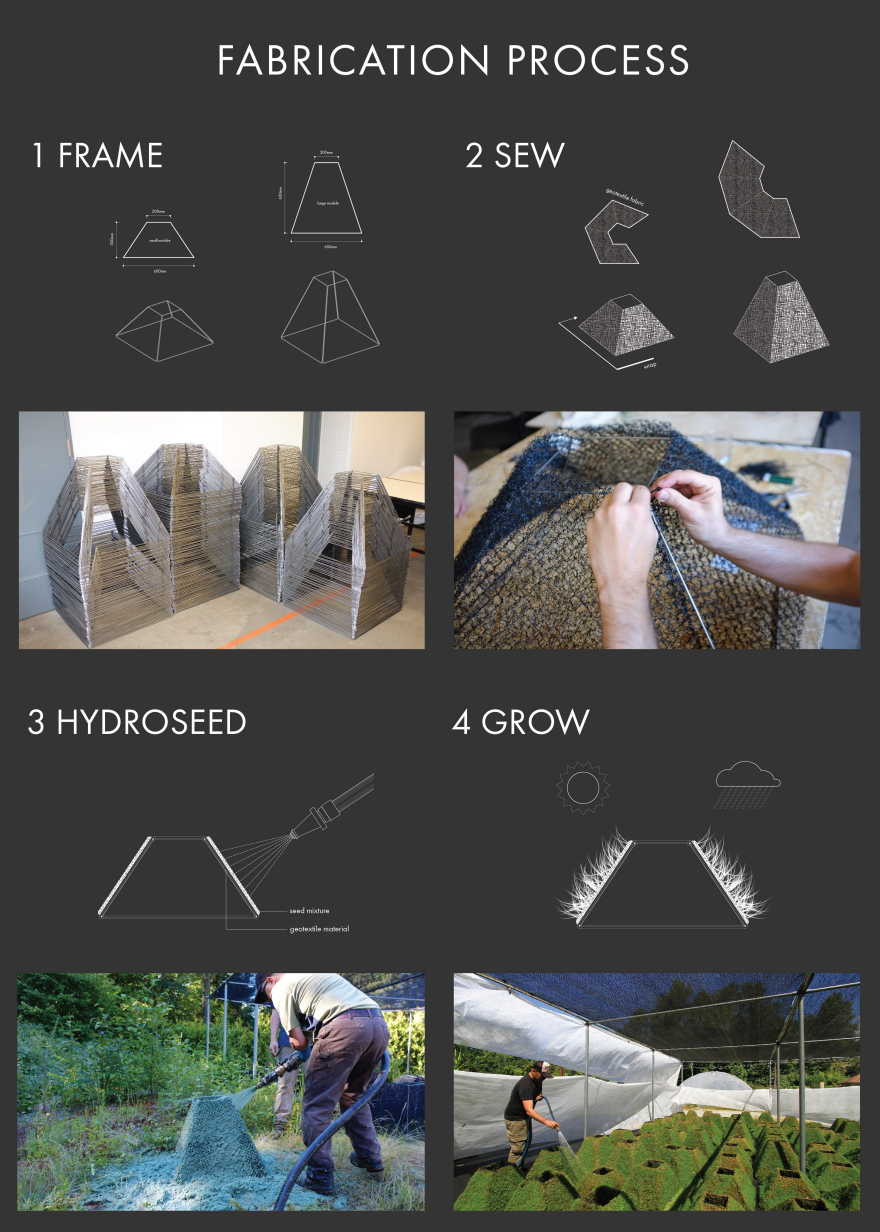 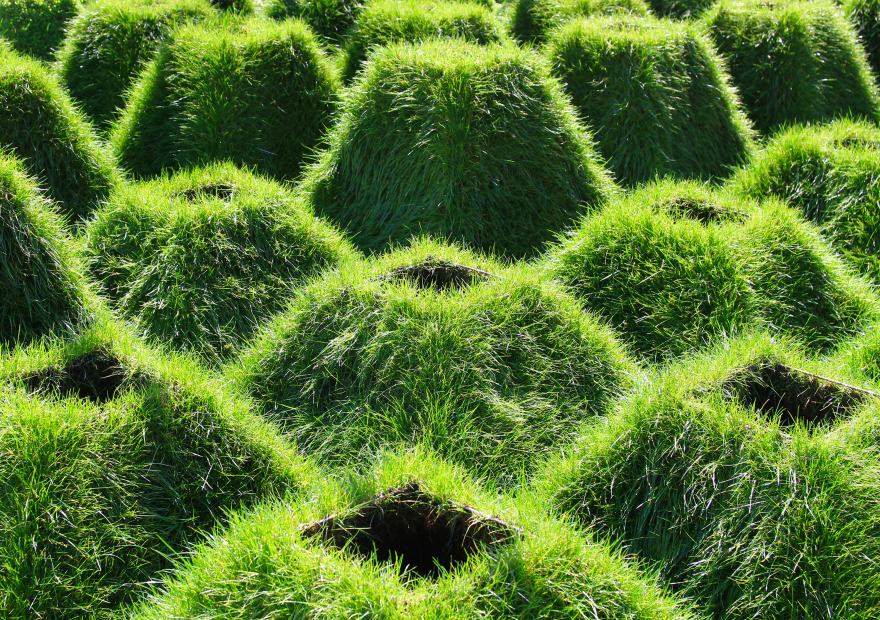 Krista Jahnke Nursery Growth After hyrdro-seeding, each module was grown at a local nursery for 30 days before being installed at the site. 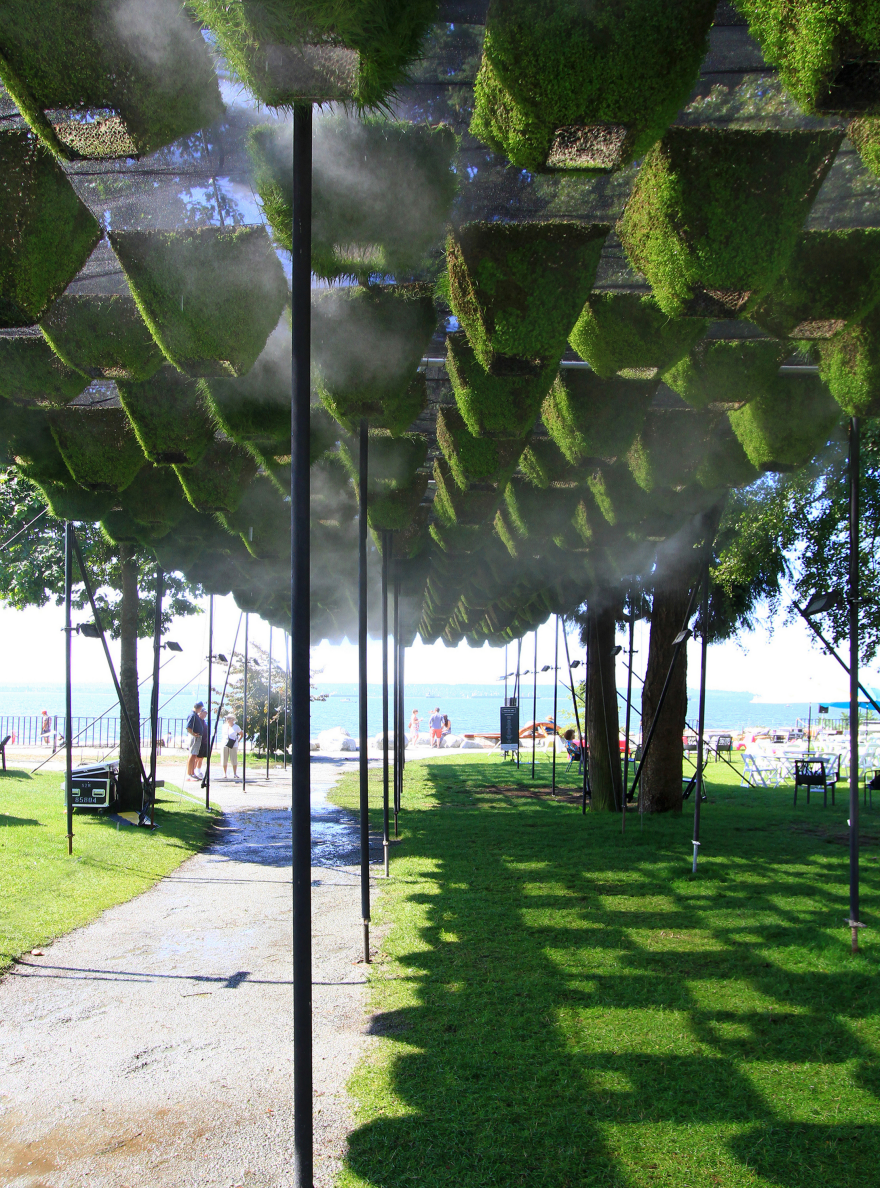 Vermilion Sands is a living canopy structure that was installed on West Vancouver's waterfront in the summer of 2014. The installation embodies an investigation into the innovative use of materials and processes to produce experiential atmospheres that capitalize upon the productive tensions between what is commonly perceived as the artificial and the natural. To achieve this aim the project synthesizes four discrete domains of design research inquiry into a unified multi-sensory and haptic space. These discrete realms are as follows: 1) Form and Pattern, 2) Biotic Heterogeneity, 3) Ambient Atmospheres, and 4) Materials and Process.

Studies into the form of modular units and their serial repetition, in terms of both overall scale and pattern, sought to achieve a configuration that evokes human systems of organization and abstraction. Through iterative modeling and drawing, a truncated inverted pyramid module was selected as a form to be used because of both its platonic purity and its ability to capture shadow and light. Through solar studies and full-scale mock-up testing, an alternating grid pattern was chosen in relation to desired levels of solar protection and richness of three-dimensional pattern.

This portion of the research involved an exploration into integrating living plant life into the modular pyramids and, by extension, the three-dimensional pattern of the overall canopy. The aim was to discover plants that would grow in the desired configuration in a manner that would heighten the perception of biotic diversity in contrast with the seemingly artificial abstraction of the modules and the overall pattern. A large number of seeds were grow-tested with mock-ups of the modules. The grow-tests were evaluated with a range of criteria, from resiliency to aesthetics. Perennial Rye Grass and White Clover were selected through these tests and are the seeds used in the final installation.

Research into embedded systems that provide sustenance for the plants' survival while at the same time heightening the experiential pleasures for users. To irrigate the plants an array of 150 nozzles are integrated in the canopy grid. Through an electronic timer, various tests were performed to find a calibration that ensures adequate irrigation while also offering adiabatic cooling for people under the canopy. At the same time, LED lighting is incorporated into the columns to uplight the modules and the misting plumes. The combination of lighting and mist produce an ethereal atmospheric ambience to the installation.

This final research domain explores the types of materials and processes that can afford new forms of artificial nature. This work involved close collaboration with a hydro-seeding company to test various scenarios for 'planting' the modules. Hydro-seeding is a planting process that involves spraying a slurry mixture of water, mulch, guar gum (a biodegradable adhesive), and seeds onto a surface. It is commonly used on infrastructural projects such as the spraying of highway embankments. With the hydro-seeding company we tested and evaluated different mixtures and geotextile substrates to determine a combination that performed well in this novel application of an existing technology.

The project is composed of 260 custom-fabricated modules that are hung from a grid of aircraft cable. Each module, after being hydro-seeded, is alive and growing with plant-life.

The fabrication process for the modules followed four steps. First, a wire fabricator produced 260 truncated pyramid-shaped frames from 10 gauge steel wire. Second, geotextile fabric was sewn to each frame. Step three is the hydro-seeding process. A mobile tank was towed to a spraying yard and contains a slurry mixture of water, wood pulp, guar gum, and selected seeds. Half of the modules were sprayed with clover and the other half with ryegrass. The final stage before on-site installation is the growing period. The modules were grown in nursery for 30 days prior to installation.

On-site installation involved a scaffolding company erecting a simple, yet elegant structural grid of scaffolding. Then a precise secondary grid of aircraft cable was integrated into the scaffolding. The modules were then hung from the cable in a pattern that alternates ryegrass and clover.