AiryLight is a kinetic light fixture that visualizes real-time local air quality by projecting changing patterns on the ceiling. AiryLight uses current technology and design to integrate information about the outdoor environment into our homes and offices. AiryLight is a clock like mechanism mounted on the wall with fluctuating light patterns overhead.

It is composed of three pieces, two of which are moving with fluctuations in the air quality data. At eye level, there is a clock-like wheel that moves in response to the air quality readings that an Arduino parses from the Internet. Above the wheel, a slender metal arm extends from the wall a few feet outwards, positioned a foot above the average person's height. At its end, a high-powered LED light shines upward.

The third component is a lens that raises and lowers above the LED light. Its motion creates the emotional spectacle of AiryLight and is physically tied to the wheel below. When the air quality is better, and the wheel spins counter-clockwise, it brings the magnifying lens up and away from the light. As the lens moves away, the projection of light through it creates a smaller, gentler pattern on the ceiling above. On the contrary, when the air quality is poor, the wheel spins clockwise and the magnifying lens lowers close to the light. At that moment, the light projection on the ceiling becomes large, complex and ominous, evoking a hazy sky.

AiryLight is also effective and provocative when installed in a pair: with one displaying the local air quality, and the other displaying another location's air quality. 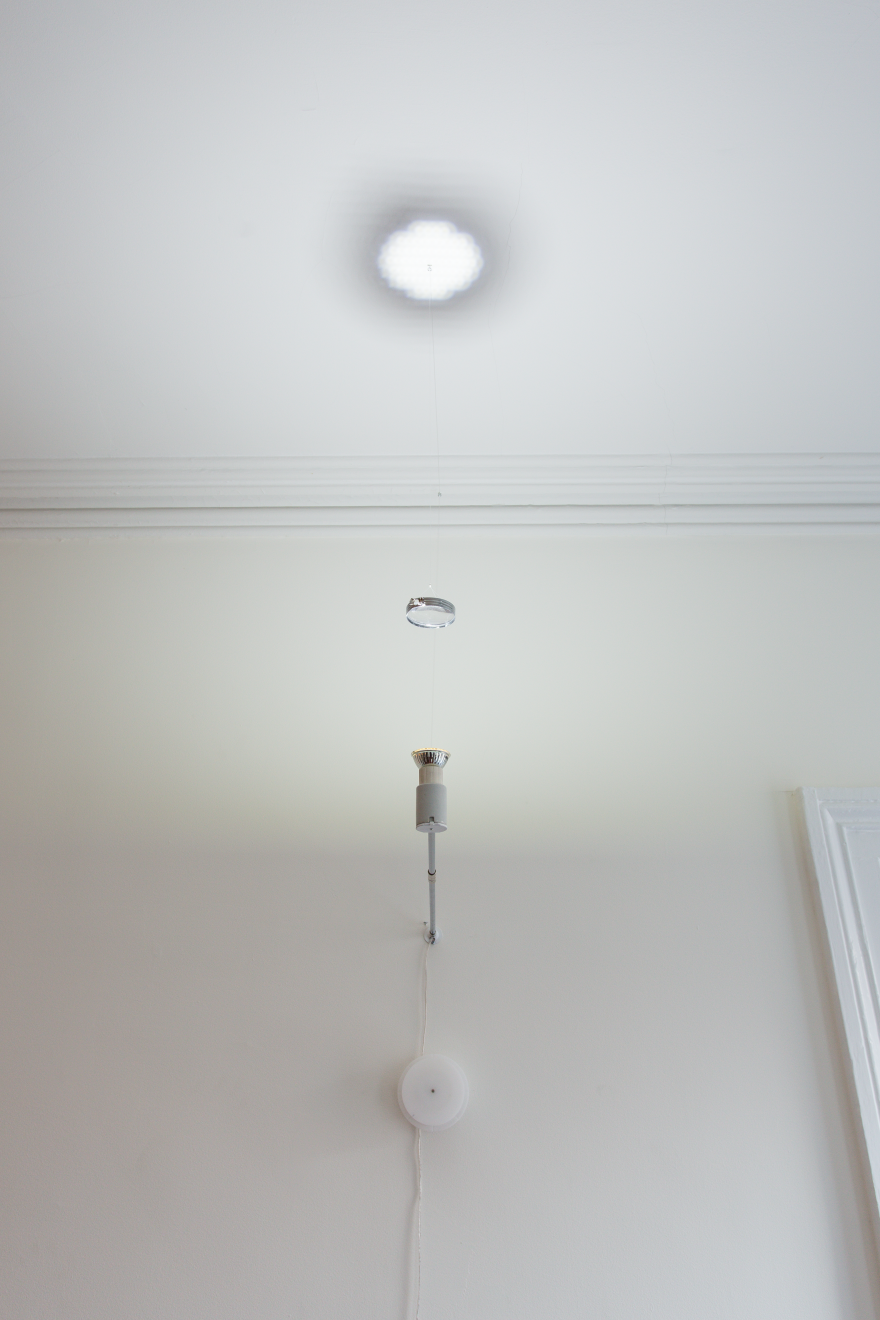 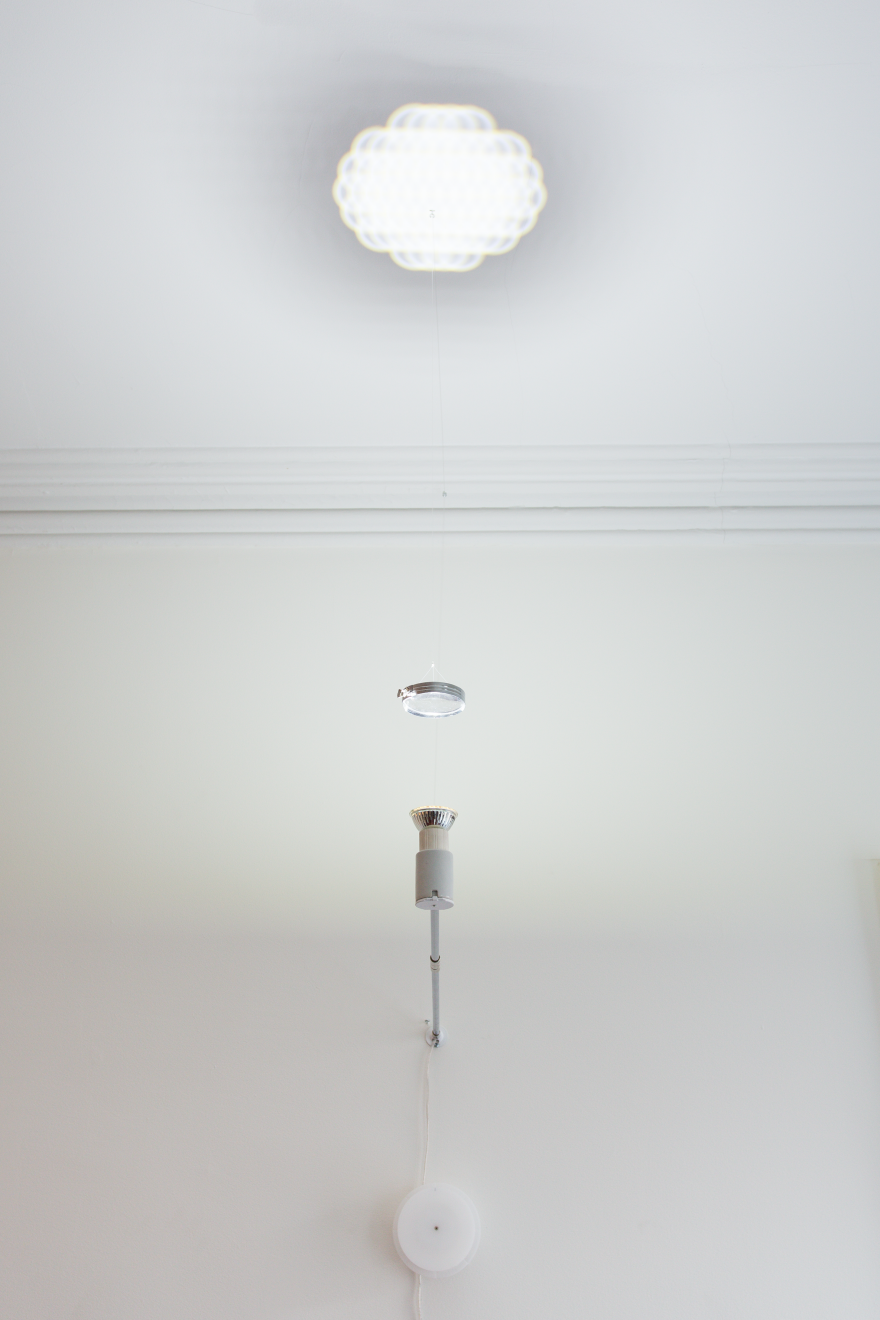 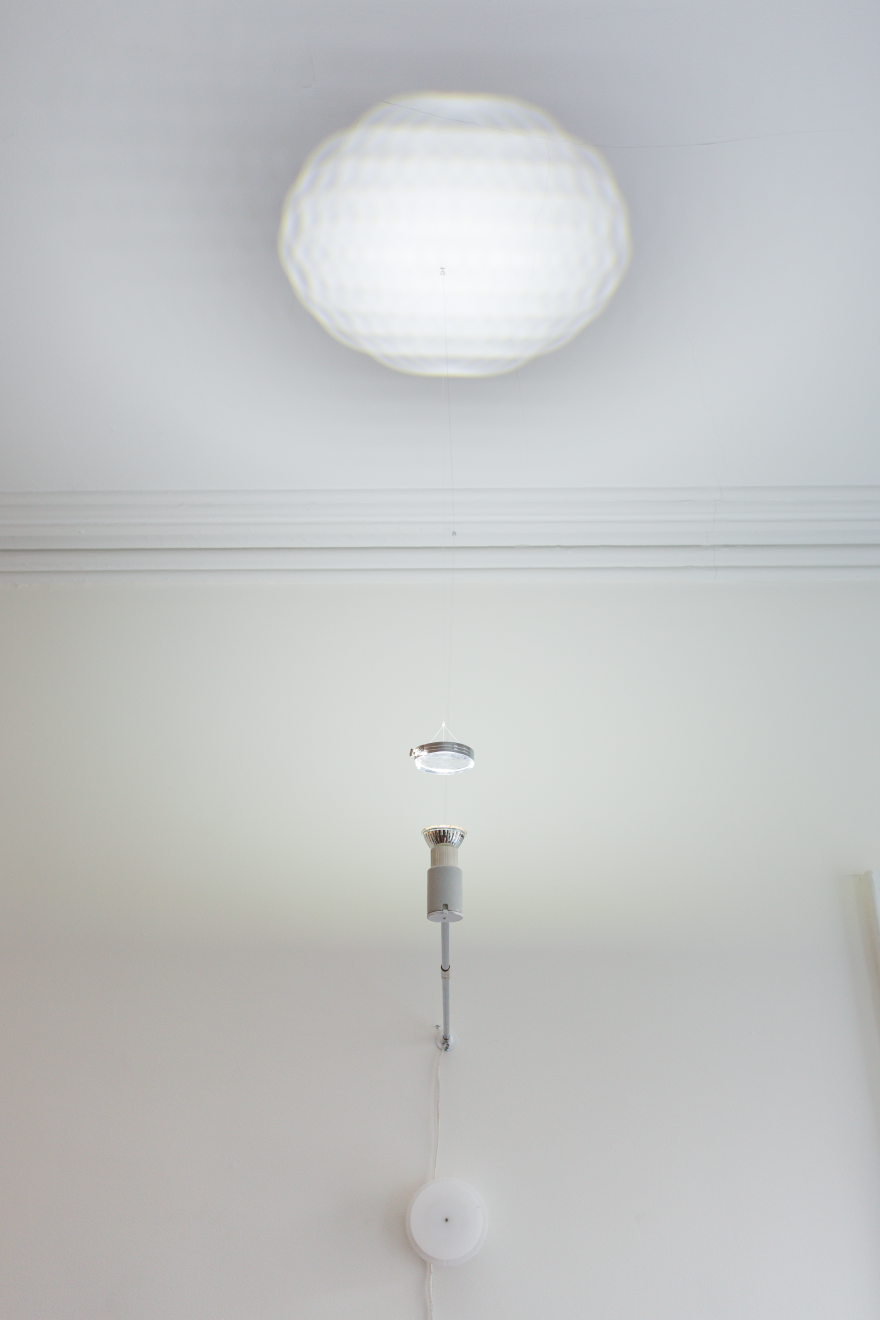 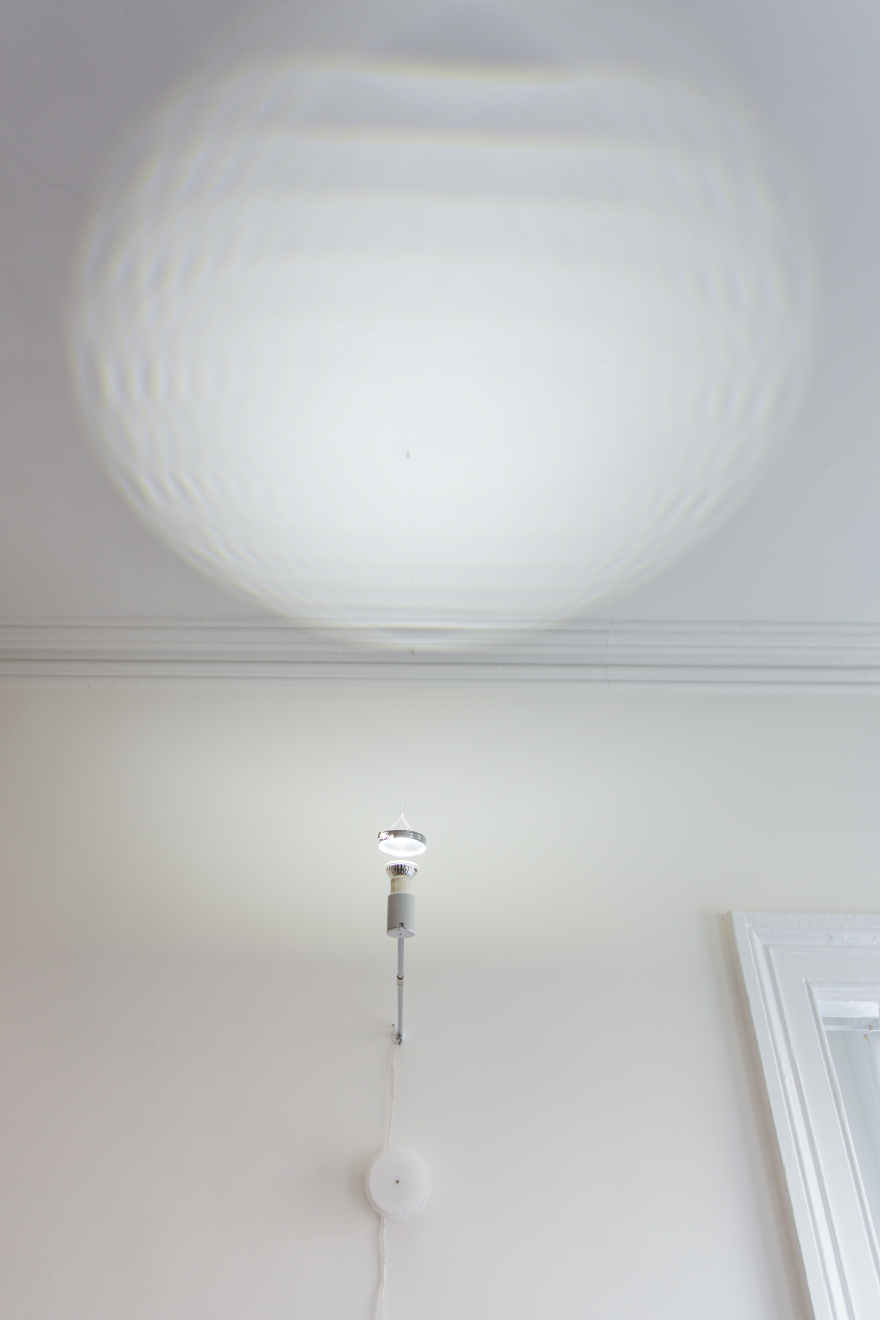 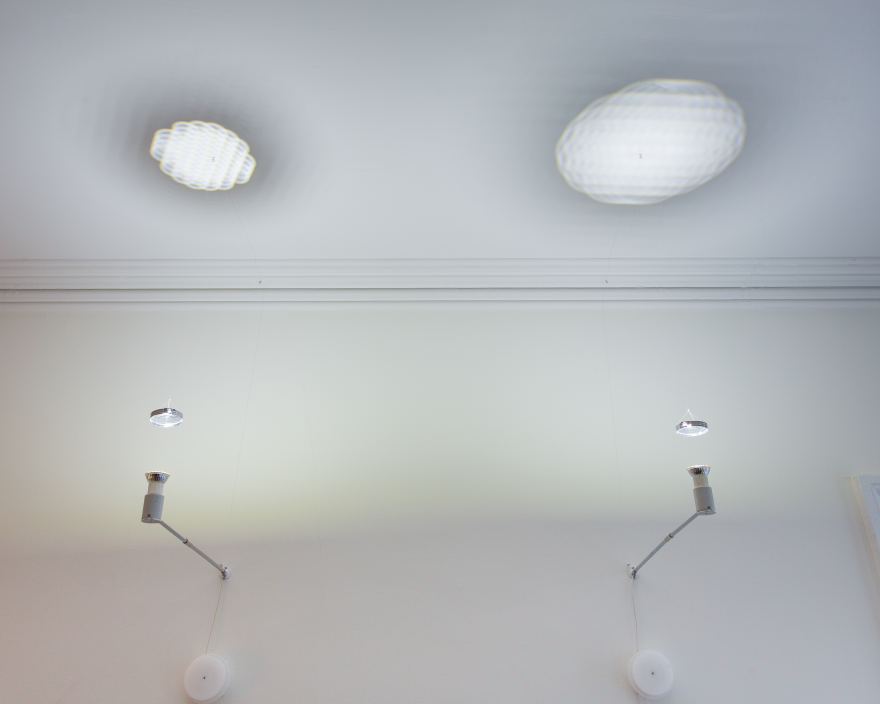 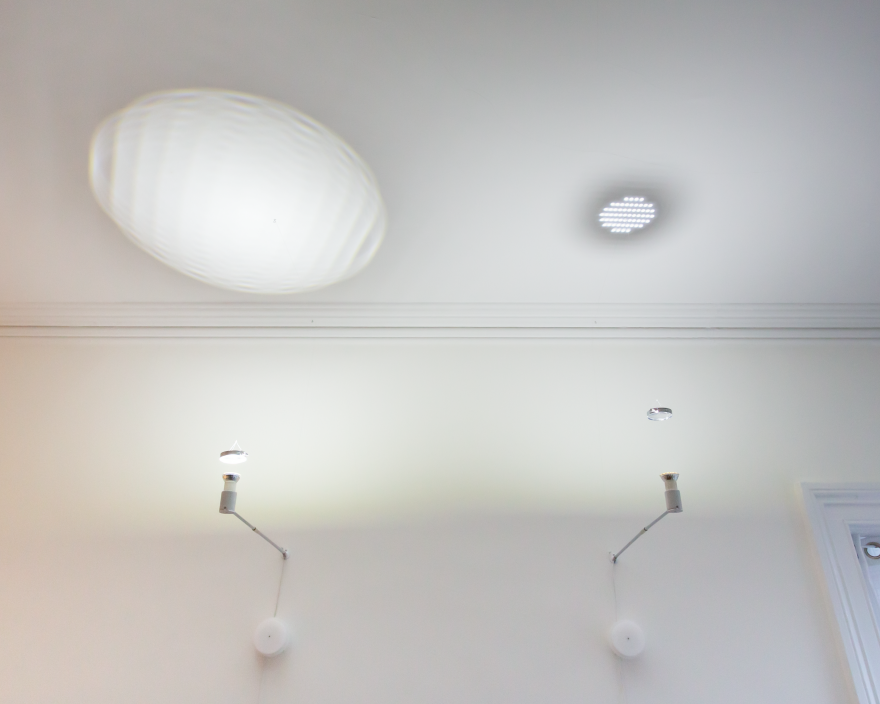 At this moment, information is flying rapidly around us, yet we cannot see or experience it until it displays itself on a digital screen in front of us - whether a smartphone or a computer. At this point, while we may intend to learn from the piece of news that may have shown up on our screen, inevitably we are quickly distracted by another more pressing or more entertaining event. This presents a central issue: while we actively set goals to learn more about certain topics, often the context with which we are presented new information is full of distractions, and the information itself is too complex to understand in such a way. Less expensive computing chips, storage and access to data as well as open source tools have allowed artists and designers to capture this information that is "flying rapidly" and create forms with it - forms that fit to our lives. Rather than solely creating prescriptive, directed lessons, it is possible to create experiences that exist at the periphery and engage our senses intermittently as we move through physical space - as opposed to in one dedicated, concerted, constricted moment. In this case, the combination of visualization and art allows for the afore-mentioned more faceted approach - not answering questions, nor only raising them, but allowing a combination of both - in that we can create an opportunity to reflect upon the issue of air quality through an object such as AiryLight. Furthermore, AiryLight encourages a different interaction around the experience of scientific data - highlighting how we absorb or ignored the vast amounts of data around us unless we are provided with an engaging, visceral, tangible presentation of it that is part of our daily lives.

AiryLight takes the clear states of air quality: good, moderate and bad – and creates a simple yet intriguing presentation of these states. The concentric circles that increase in overlap and size as the air quality worsens mirror the increasing disruption and turbulence that poor air quality causes. The mapping of one piece of information to an entirely different output challenge viewers to learn the mapping over time, to identify novelty as the air quality changes, to identify the differences from one moment to the next. While the scientific community often focuses on using data visualization for dispassionate analysis, through AiryLight I propose that we can also open the field up to creating designed, artistic objects based on data that encourage emotional response based on its aesthetic qualities as well as the data it conveys. The domestic situation of AiryLight allows for peripheral engagement with the air quality data visualization. Owners can continue in their daily routines, breaking as much or as little as they wish to engage with the kinetic light.

Physical design exploration: While projecting AiryLight downward did make the patterns I desired, and my passersby enjoyed them, the body language or experience of staring downward was not consistent with an inherently upward type of data - air. Another choice I made over the course of several rounds of prototypes, installations and feedback sessions, was to minimize an initially large wheel and clearly marked mechanism that served as an alternative form of information to the patterns overhead. The feedback I heard was that owners and viewers felt that they had to pay attention to too many things - the very issues that I was designing against - it was too much for users to take in: both reading the meter-like etchings and observing the patterns overhead. Thus, I redesigned the mechanism to be a minimal, small wheel that spool the cord from the lens or unspools it. While it is still a veritable part of the installation - and can in fact be read if the user desires to read it - it does not require attention in the same way, allowing the user or owner to simply enjoy and pay attention to the patterns projected above.

Physical installation choices: Inspired by ambient media such as the work of Dunne and Raby, Jeremijenko's Live Wire, it was important to install AiryLight as a periphery experience - one that continuously changed as the air quality changed, but never alerts us beyond the simple mechanisms of subtle shifts in light patterns and the light gear grinding machinations. It was also crucial to be able to install AiryLight in a domestic environment, workplace, or other space that was passed through often - a space that would evoke its purpose: being a part of daily life, telling you something new every day.

AiryLight creates soft ambiance indoors, while also consistently informing you about the outdoor environment. The dynamic display of information is meant to be visually informative as well as playfully inviting for viewers to discuss, track, and share what they learn about changes in their day-to-day surroundings. AiryLight visualizes the invisible: invisible information literally around us all day.