In the Fall of 2014, Better World by Design, an annual conference that focuses on multidisciplinary approaches to solving global problems, was held in Providence, Rhode Island. Organized by RISD and Brown University students, it was a three day event that hosted lectures, workshops, and open discussions focused on the free sharing of ideas that promote sustainable and socially conscious design. We were commissioned by the organizers of the event to design a communal space as well as advertising for the event.

Given that the prompt was open and function of the space was simple, we decided to use the opportunity to explore the idea of inhabiting the color spectrum. As people, our only direct interaction with RGB (the red, green, blue color spectrum) is usually with the digital pixel that we almost never notice without a magnifying glass. By placing the visitors inside the pixel, they have greater understanding of the light interactions around them in everyday life. Using the RGB color system we intended to highlight the subtle color variations that derive from the intersections of these colors.

Our design uses light, color, and space to invite visitors and lecturers to relax and exchange ideas in-between scheduled events. Physically, it is a red-blue-green filter for light to be cast through, projecting the additive color spectrum on the floor; an ever-changing color environment. The smaller bubbles (Pods) were inflated around Brown’s campus, creating an identity and presence of color before the conference. In the Pods, visits are short and reactions are on the afterimage: after staring at blue, a visitor will see more yellow. The varied colors from the mixing of the RGB make for a relaxing environment that people tend to stay in longer to observe the subtle color relationships. 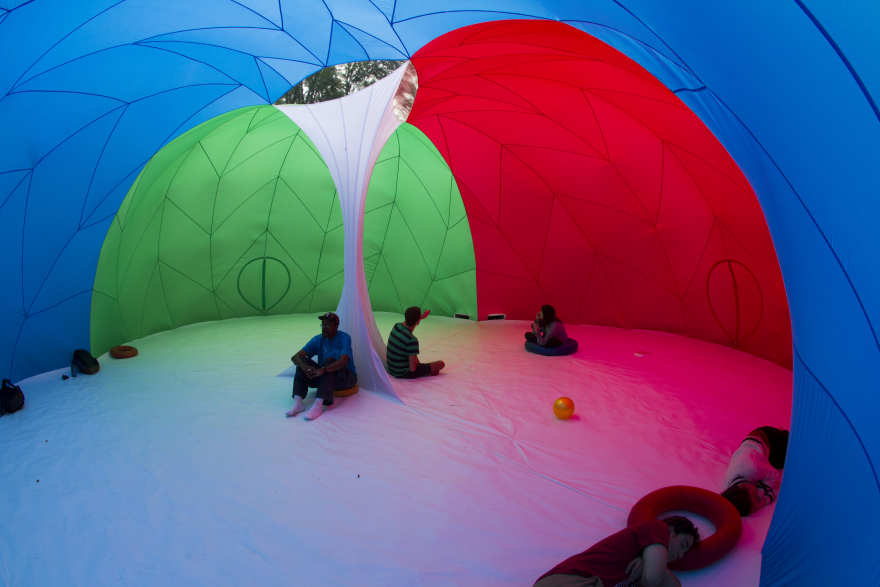 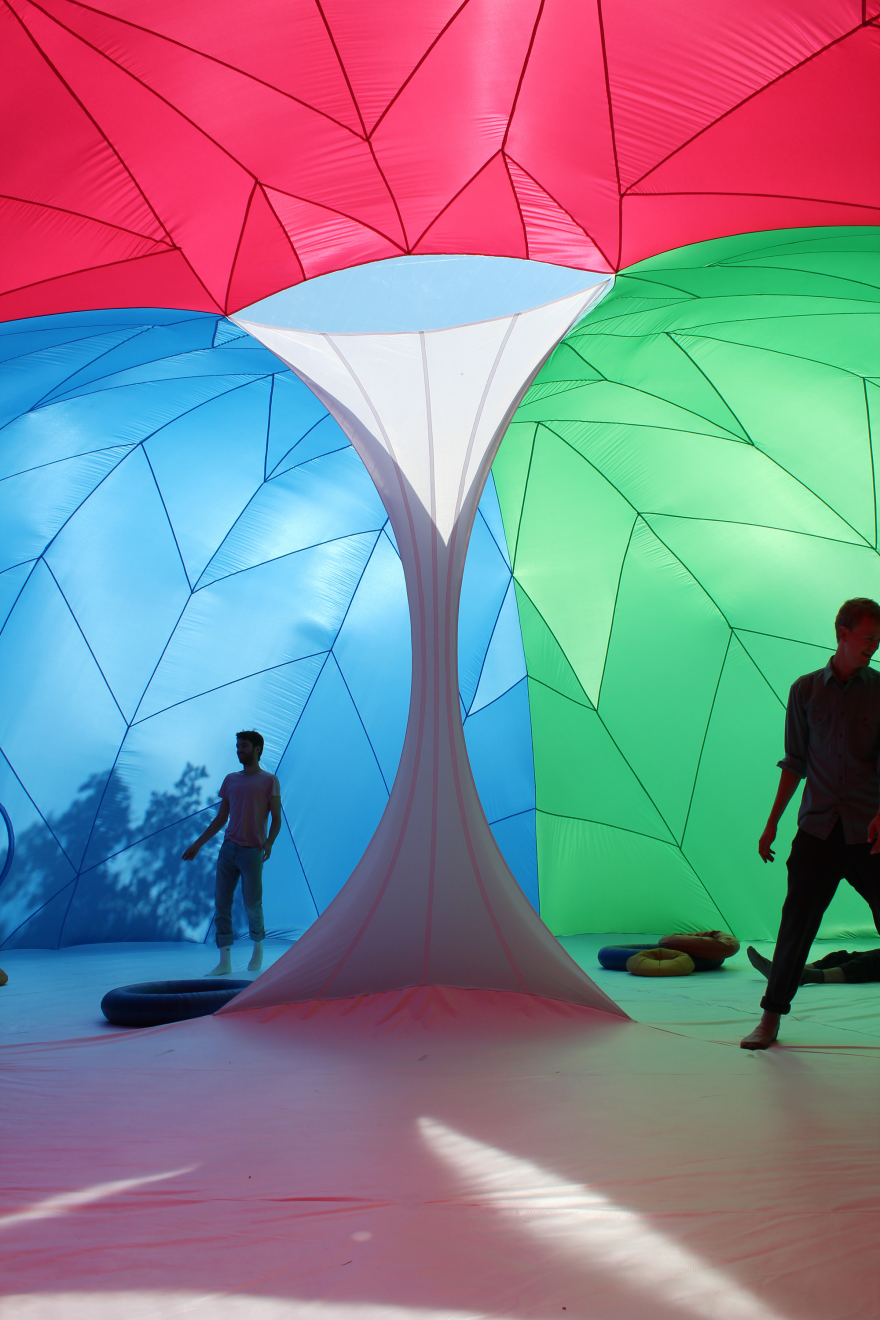 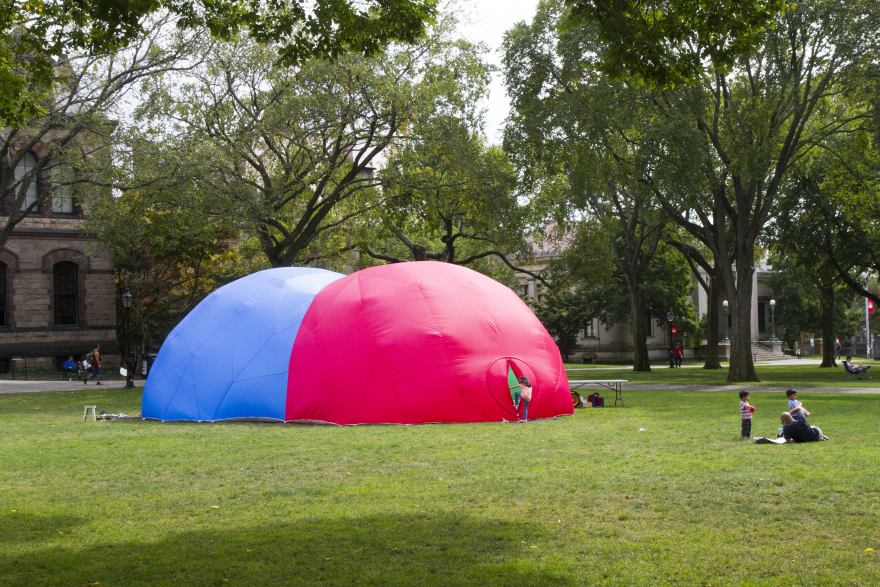 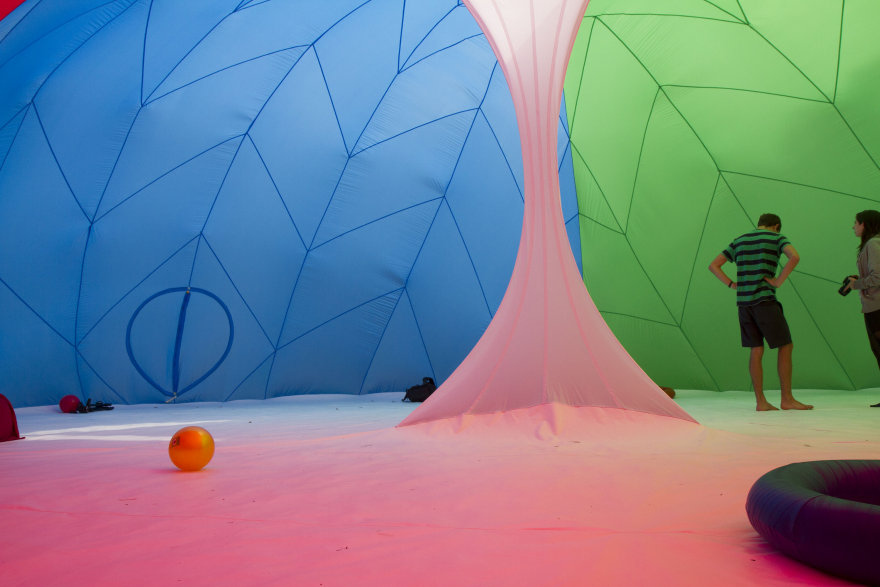 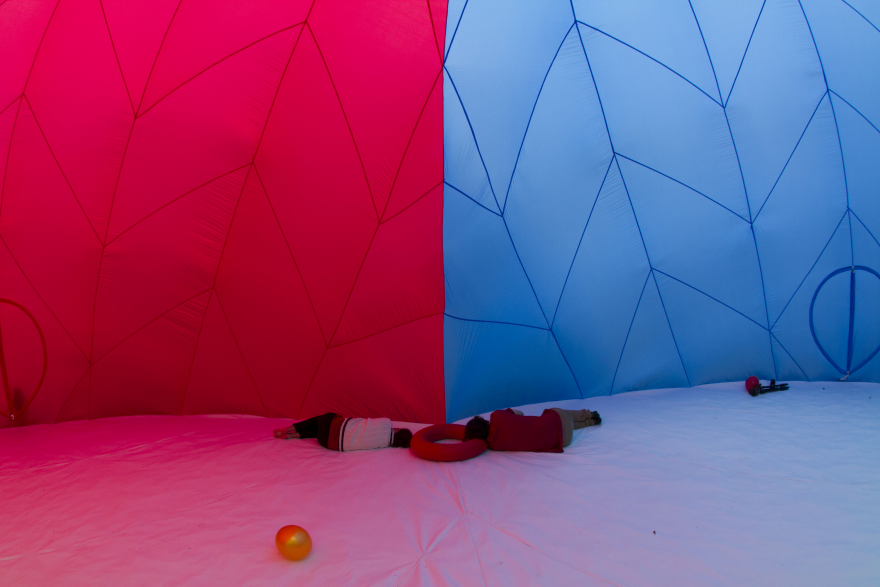 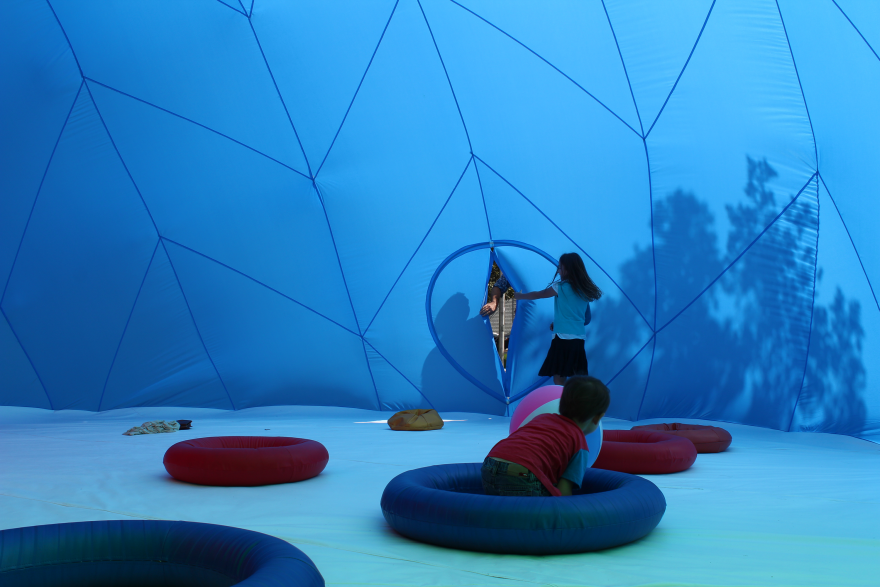 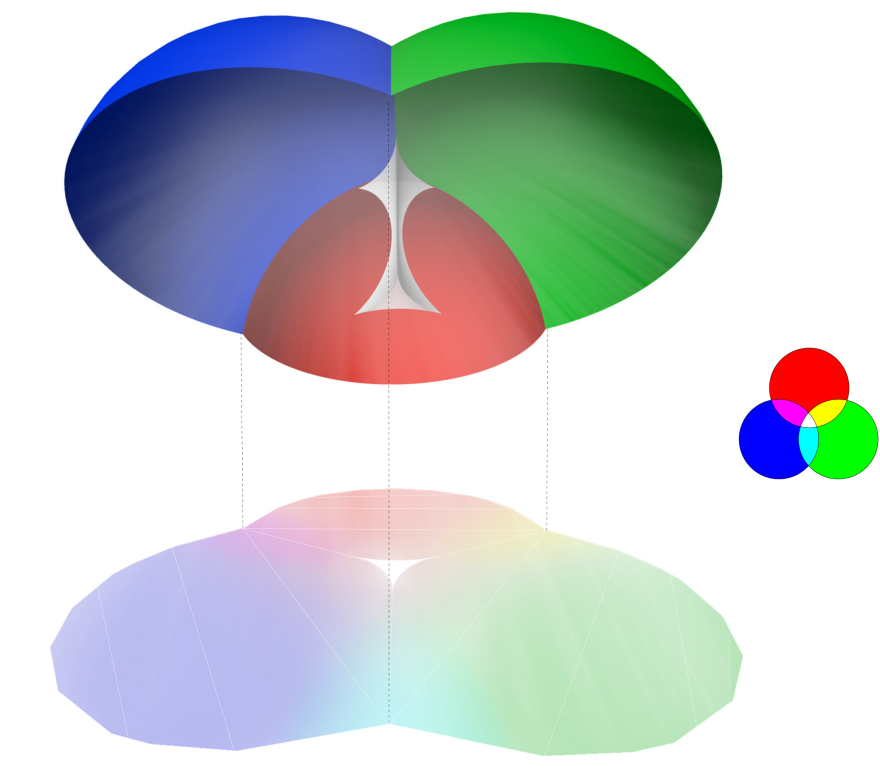 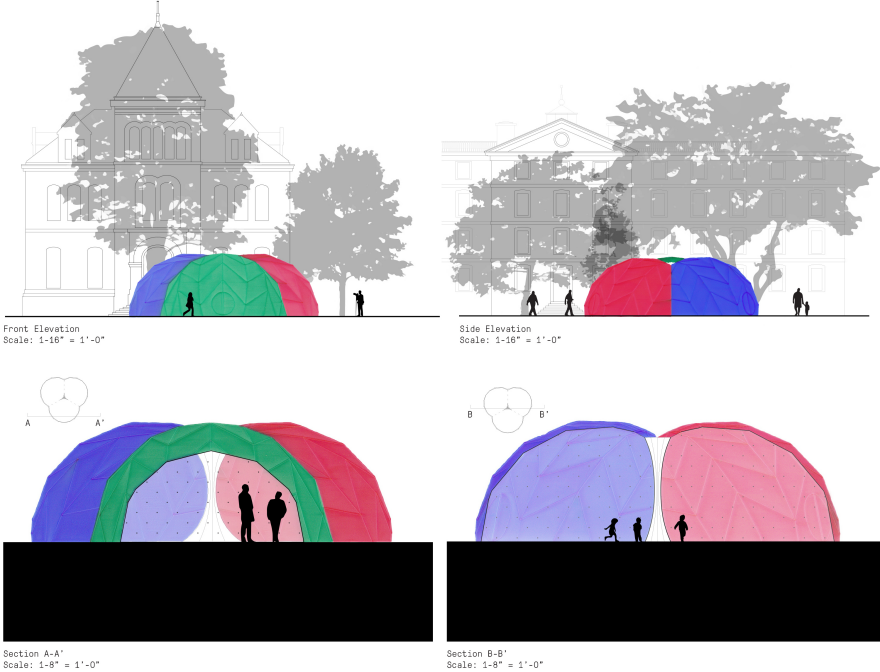 We are Pneuhaus, a design collective working within the fields of architecture, object design, and contemporary art. Our work deals primarily with pressure systems to create large scale immersive environments that relate to the human scale. As a mix of architects, designers and artists, we strive to weave these varied disciplines into the greater discourse of our built environment.

As a studio, we push our practice and explorations with each project. Color was a perfect area of exploration within our usual work of space. Rather than using it as a decorative element, we wanted this space to treat color more as an experiment, an open diagram that would turn viewers into participants; to put people inside the color spectrum.

We were inspired by the graphic language of the color wheel and wanted to see if we could create a space which could enhance the information given by its 2d counterpart. The form from there was very simple. Each primary color was assigned to its own sphere and arranged in a 3 dimensional venn diagram. But the problem of maintaining the depression of where the three spheres intersect was new for us. We settled on a tension beam. The beam follows the curve of the spheres, transferring it into the floor. Being under pressure from all sides, the beam has a different formal language that the rest of the structure. It emphasizes the tension that is inherent in all inflatables, but is not always obvious to the viewer. The beam made for an unintentional, but well appreciated reference to the classical column, the seam lines resembling flutes. The function of the beam is also paradoxically similar to that of a stone column, it is crucial to the structure, but rather than supporting a large mass it is pulling the form together.

The forms of each aspect of the project is inter-related.The pyramidal space created by the intersections of the three spheres became the formal basis for the Pods, while their outer shell became the skin for the RGBubble.

The Pods were placed at various events on campus in the weeks prior to the event. Unexpectedly the pods often became small study rooms with some students staying for extended periods. We found that by spending a few minutes inside of a Pod being hit by sunlight would result in your eyes adjusting to the complementary color of the Pod when you exited. Spending time in the green Pod would result in highlighting reds, blue highlighting yellow, and red highlighting green. These color immersions acted as a fun and interactive way to engage students while informing them of the upcoming conference. While the Pods were platforms to experience one color in isolation, the RGBubble displayed how the different colors interacted. Designing the larger space, we wanted to see if we could create a color wheel effect on the floor, where the light passing through two colors would cross and create an opposing spectrum. In the case of the RGB spectrum, Cyan-Magenta-Yellow (CMY) would be displayed on the floor while muted versions of the original colors would be projected on the central column. We chose a somewhat glossy, heavier fabric for the floor to sustain foot traffic as well as splay the intersecting colors across the floor.

Since the prompt called for high traffic, maintaining pressure was essential. People travelling in and out of the space would need to do so without opening a large hole for air to escape. The doors on past projects wouldn’t suffice: constructing an airlock would create the need for another blower and make the structure more difficult to relocate. To solve this, we developed a magnetic strip door system with a tensioned PVC member. The tensioned door snapped shut immediately after opening.

After deflation, a Pod folds into a backpack and the RGBubble becomes a four foot, 80 pound roll. The structures we made could be set-up, taken down, and moved around Brown’s campus easily.

With this project we aimed to create a space that enabled people to experience the color spectrum in a new and immersive way. We were able to provide a space that works as a casual discussion area, a lounge, or a space to play, all while pushing our understanding of color in the built environment. People were profoundly relaxed once they entered the RGBubble and the colorful environment lead to a calm, yet productive atmosphere. While the conference goers quietly conversed and shared ideas, students sprawled out and worked on their studies.

This was one of the few spaces that created an immersive environment. It creates an inflatable, colorful, inviting space.