24 Hours in the Life of a Swiss Cuckoo Clock

This project is an itinerant scenography for the exhibition 24 Hours in the Life of a Swiss Cuckoo Clock, presenting a series of 24 Swiss cuckoo clocks designed by students and professional designers from HEAD Geneva.

The main challenge was to design a display for the clocks that could also become a transportation case for the 24 objects.

The exhibition has now opened in Montreal and will then travel in various countries across the world, including Singapore and the United States.

This scenography is focusing on both the technical aspect of a foldable display and the creation of a set associating Swiss cuckoo clocks' tradition with their new design possibilities.

The modules also have openned ans closed windows in the same manner as traditional cuckoos do.

By adding those different house shaped walls in the space, the exhibition becomes a small cuckoo village where the visitors can freely wander. They can enjoy the sounds produced by all the clocks.

The foldable principle and the transport have been main considerations in the project and have had a big influence on the final shapes of the modules. The result is foldable three sided modules using hinges that also take an esthetical part in the project. Once folded, two of the modules are used to host the cuckoos in the thickness of their walls. All the folded modules can be placed on palettes, using very little space during transport. Thanks to a system of double panels that can turn inside out, there is no need to over protect the folded modules for their transportation.

All in all, designing this scenography was about finding the right balance between an atmosphere bringing together tradition and contemporary design, and answering to this very technical issue of an all-in-one itinerant scenography. 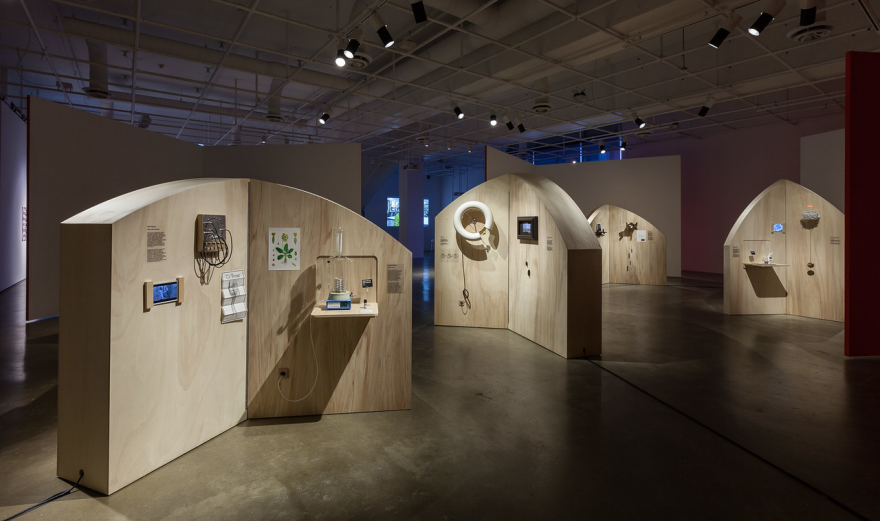 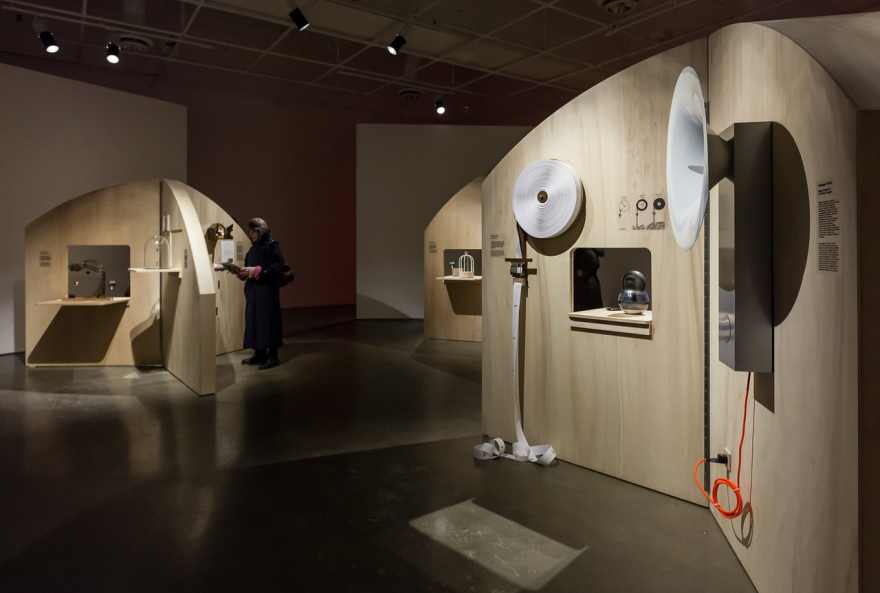 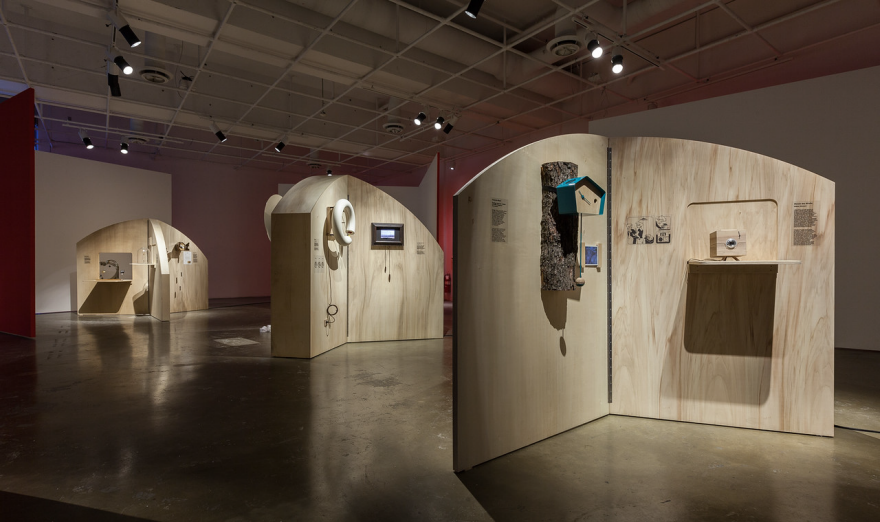 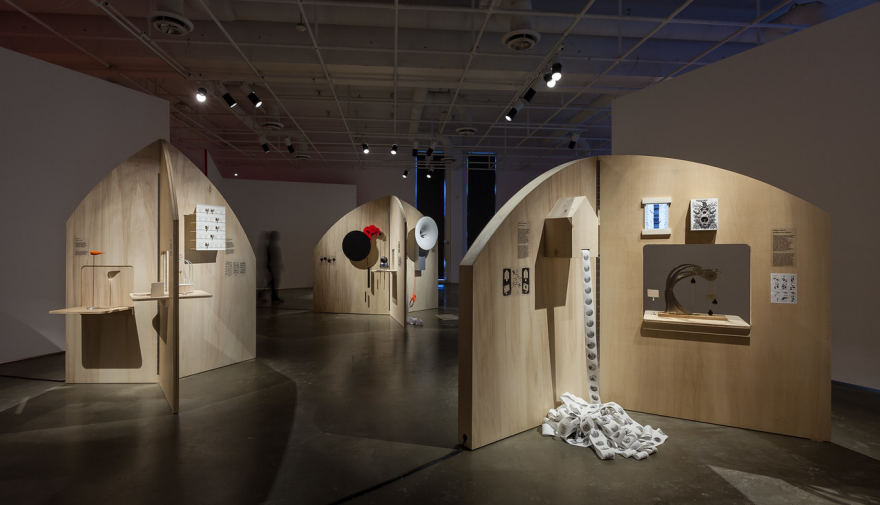 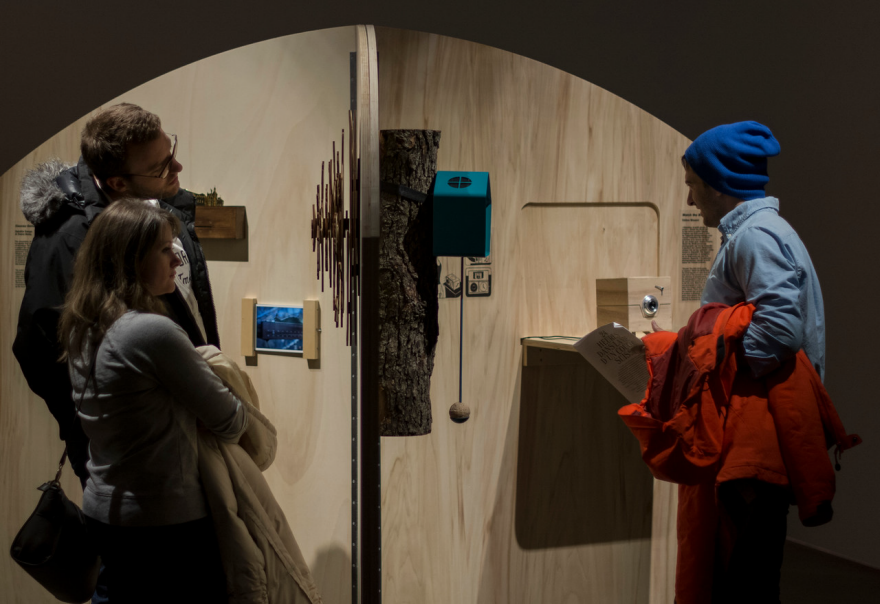 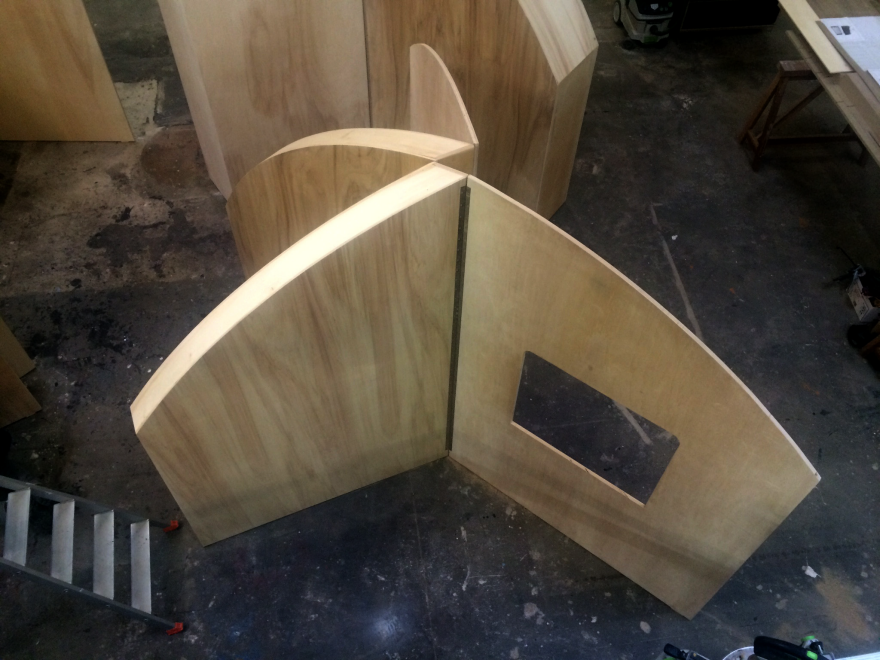 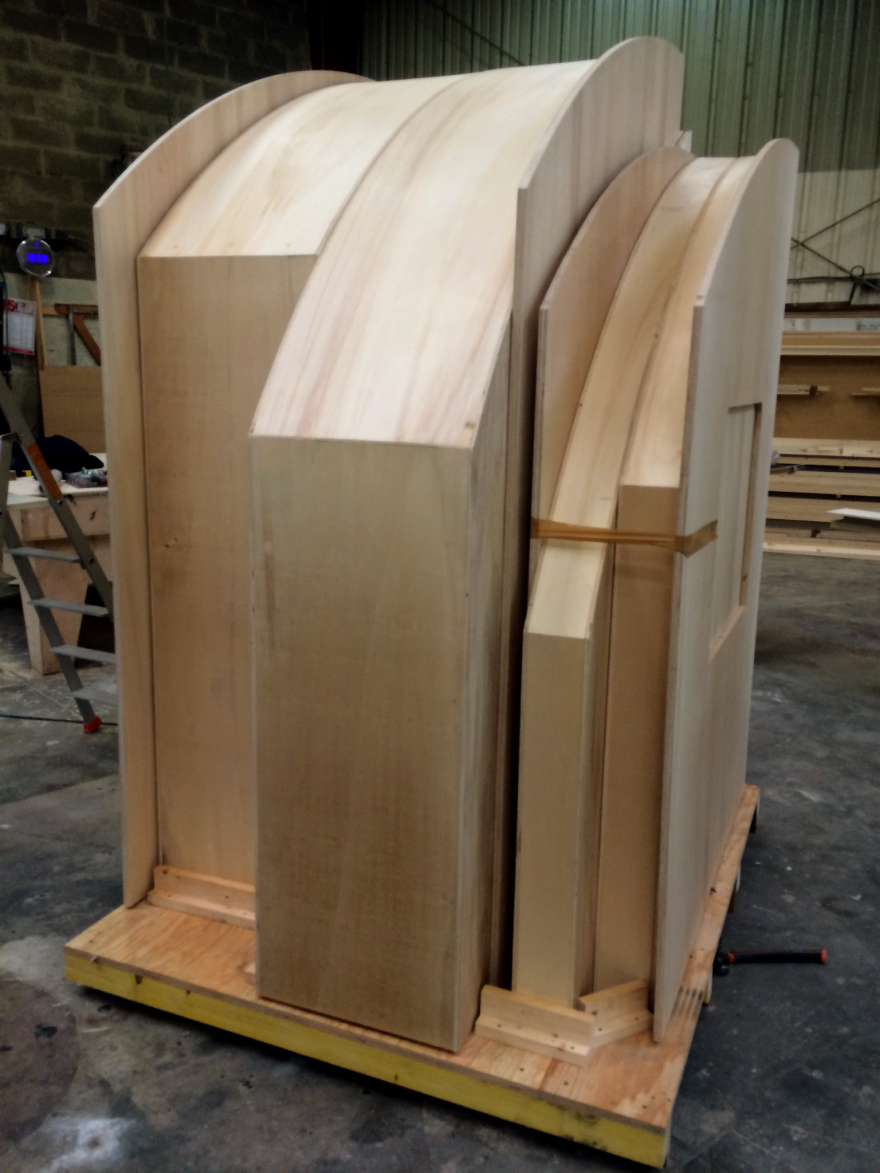 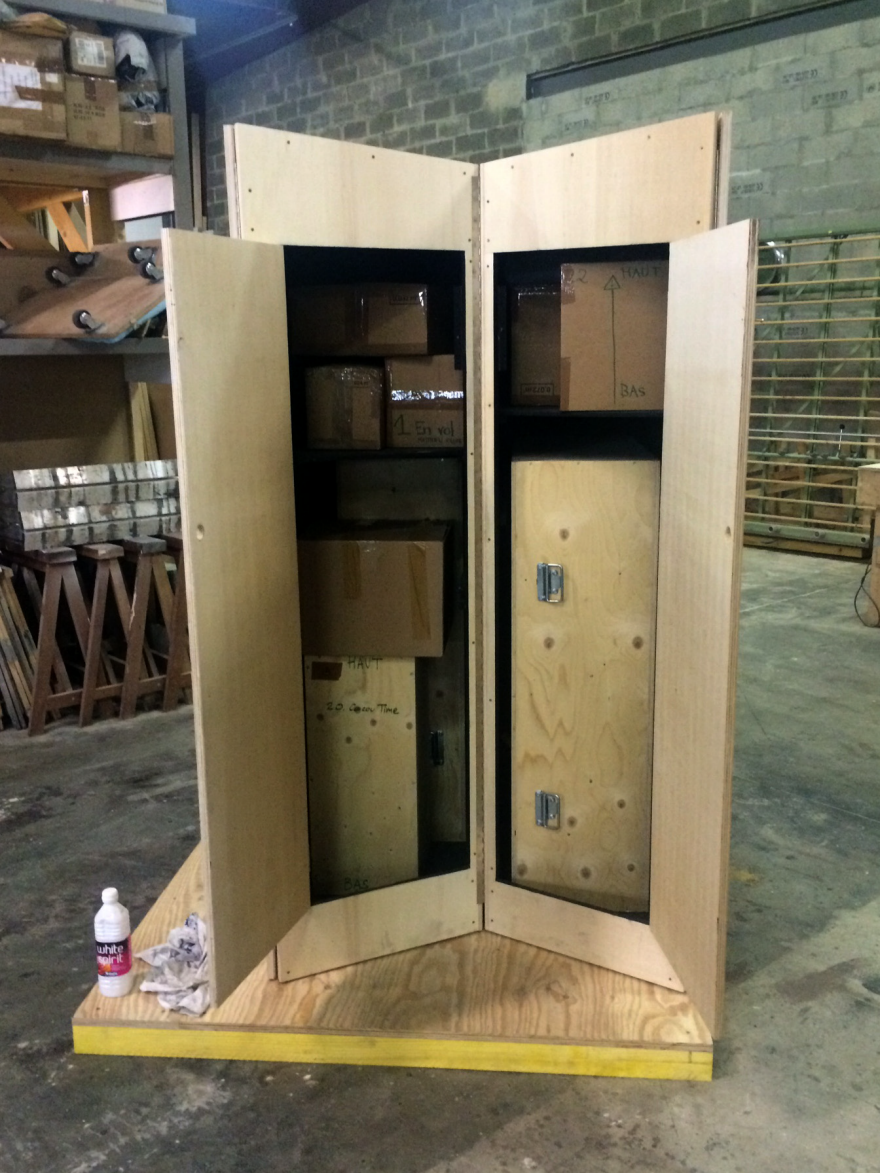 The module as a box 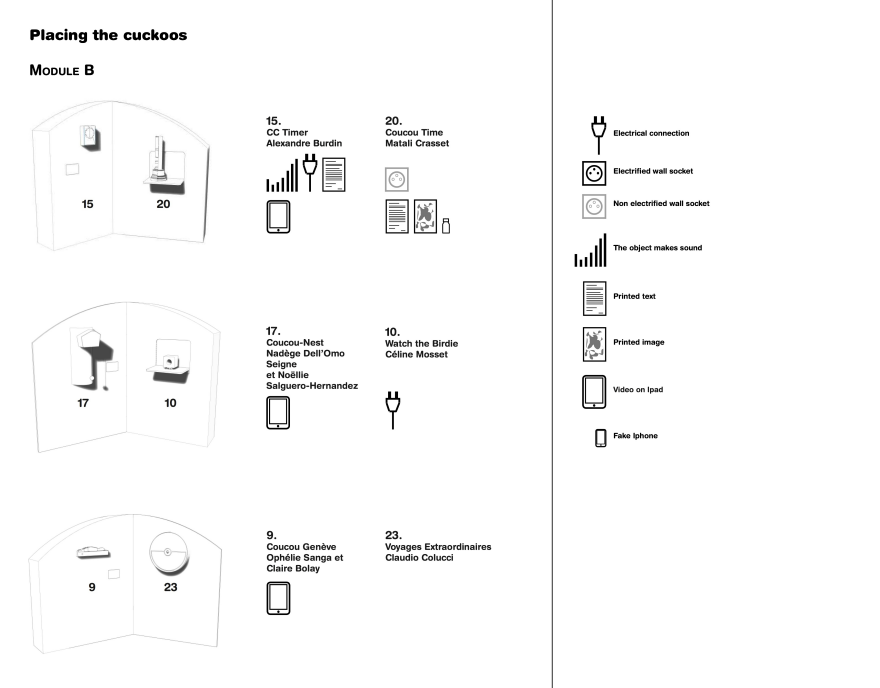 Excerpt of the distribution document for the 24 cuckoos

Each module of this scenography is unique, and was custom-designed for this very eclectic cuckoo series.

We carried out an important work on how to place the 24 cuckoos, knowing that each module was showing six cuckoos, with two cuckoos per wall side.

We chose this set-up for aesthetic but also technical reasons. We took into consideration the following criteria: electricity, display height, size, sound and associated objects. We created families of six cuckoos that would be displayed together, on the same module. We then adjusted different parameters such as: height, width, position and size of the shelves and windows.

All the modules (except for the introduction one) are composed of two thick walls and one wall made of two wood panels. The two thick walls are hollow and include the power supply for all the electric cuckoos during the exhibition. Indeed some of the cuckoos are not mechanical and require electricity.

During transport, all the cuckoos are separated in boxes that can be placed inside fifty centimetres thick walls. By working with 3D software to precisely plan the arrangement of the 24 boxes in the walls, we managed to make them all fit within four thick walls, that is to say two modules. We were then able to reduce the wall thickness of the two other modules to fourteen centimetres, since their sole purpose was to insure power supply.

The third wall of the modules is made of two panels joined together and has a protection purpose. When a module is folded, those two panels are deployed on both sides of the thick walls to protect them. When the module opens, the two panels join and the parts that endured transport are placed against one another so that only the clean part can be seen.

We decided to keep the hinges visible so that once unfolded the modules can still show their folding ability.

The folding principle of the modules is made in such way that the inside door of the thick walls can only be reached in the folded position. Once they are folded, the four three sided modules can form pairs in order to take as little space as possible.

The windows in the modules refer to the traditional cuckoo going in and out of its window. The scenography reinterprets this traditional image with its opened and closed windows but also gives them a display purpose. Each window becomes indeed a support for a shelf. Closed windows are actually all the windows placed on thick walls. The shelves placed on closed windows can insure power supply to the object on it.
Opened windows are placed on double panel walls. They become an assembly system by enabling the two panels to stick together, and they are also a good way for highlight objects that are interesting to see from both sides.

With their movement, shape and details, these folding modules become a sort of mise en abyme of the inside mechanisms of the clock.