Nowadays, products with electronic features are being used in every part of our lives. Like all products, these need to be tested as well. When designing them, this is where it comes to electrical engineering and programming – skills not all designers and product developers possess. However, especially in the early stages of product development, it is important to test if an idea works.

blokdots is solving this problem by providing a professional but at the same time easy-to-use tool for physical prototyping, that supports designers during all stages of development. 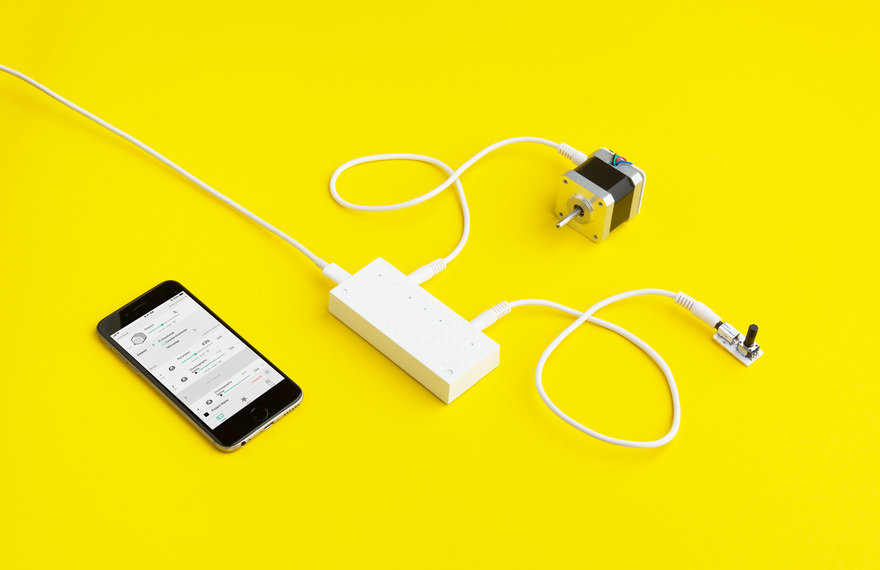 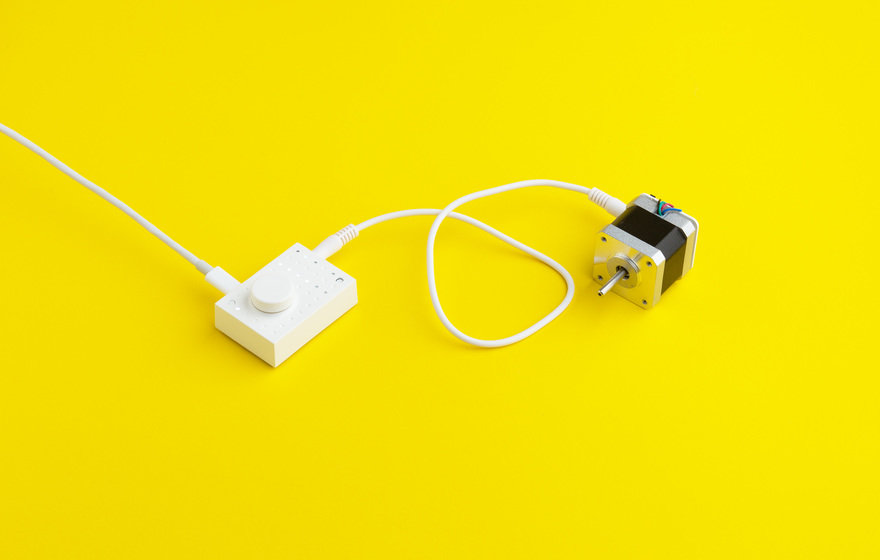 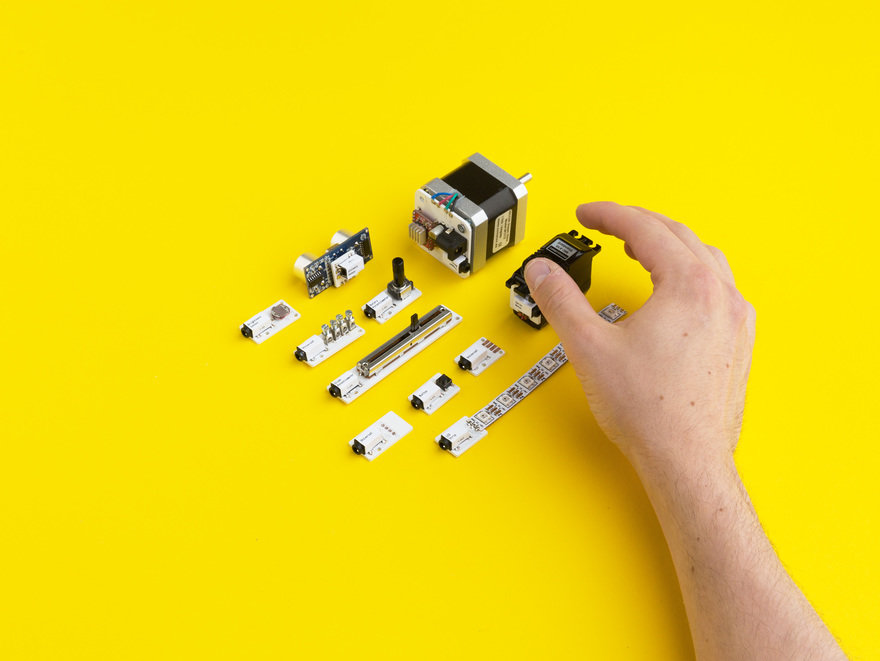 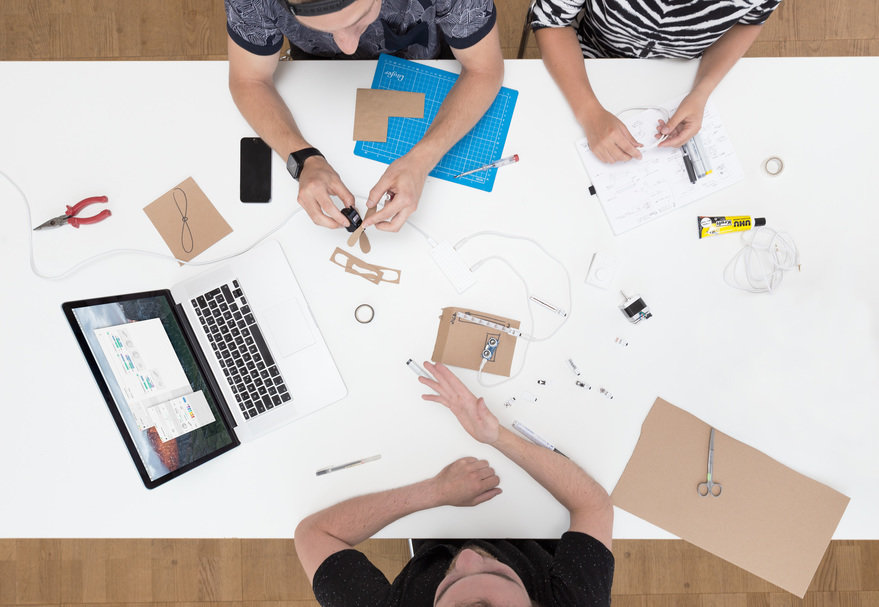 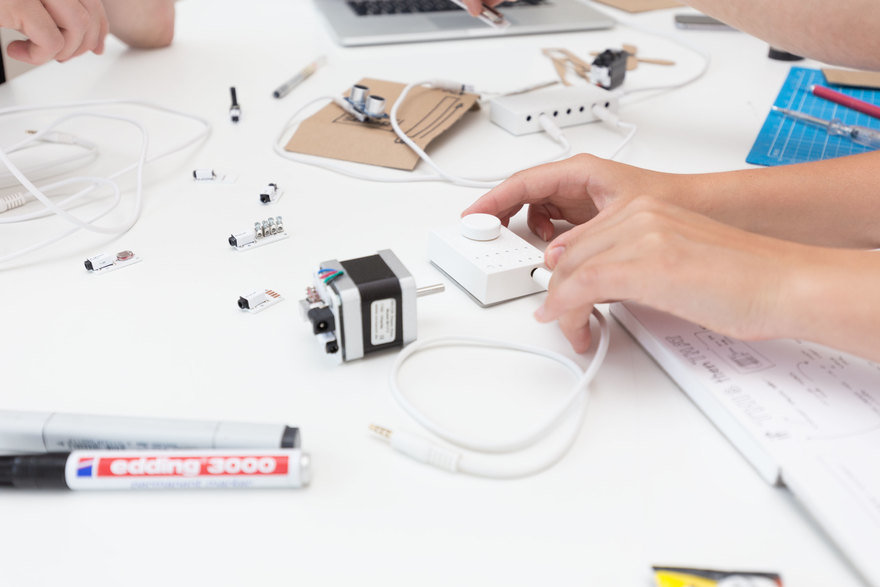 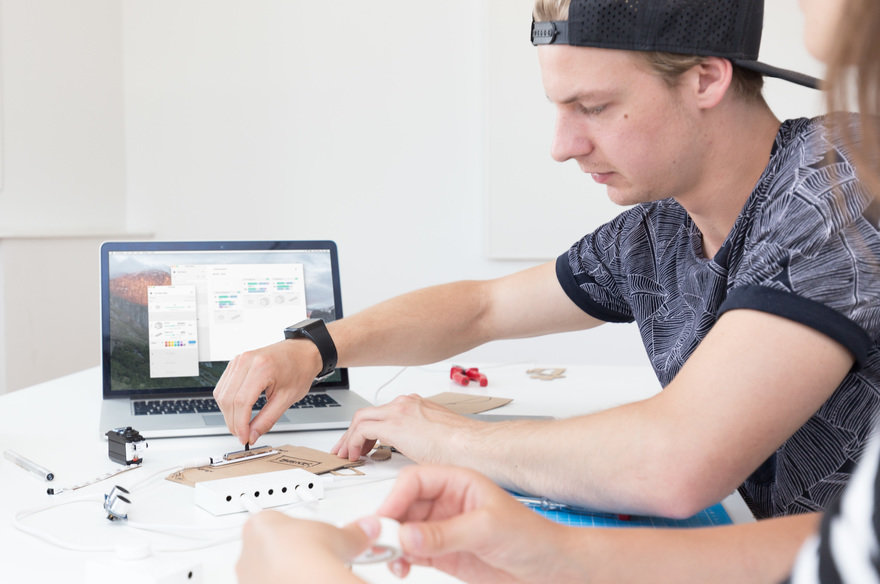 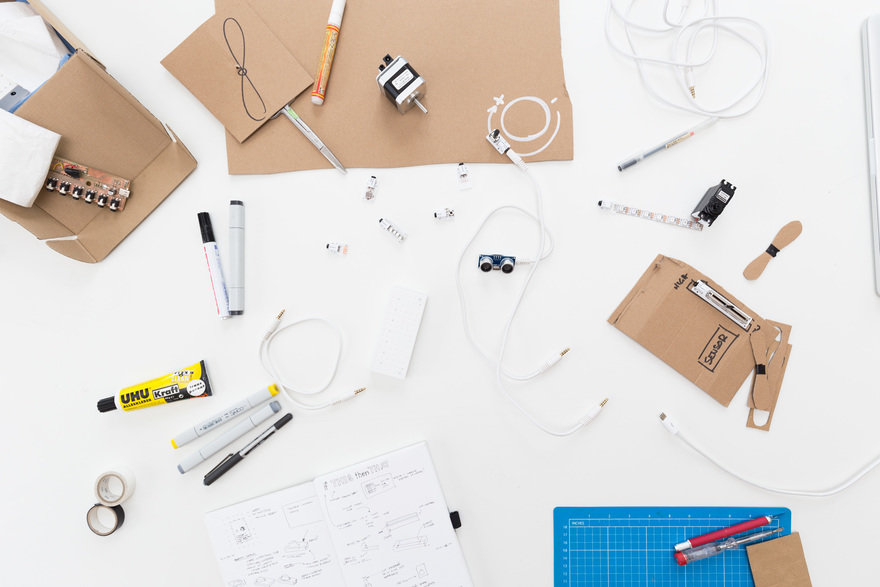 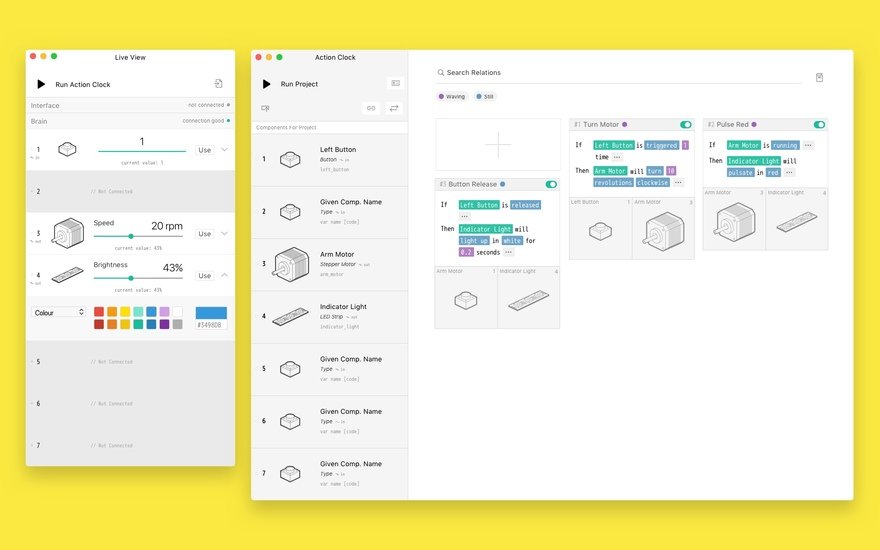 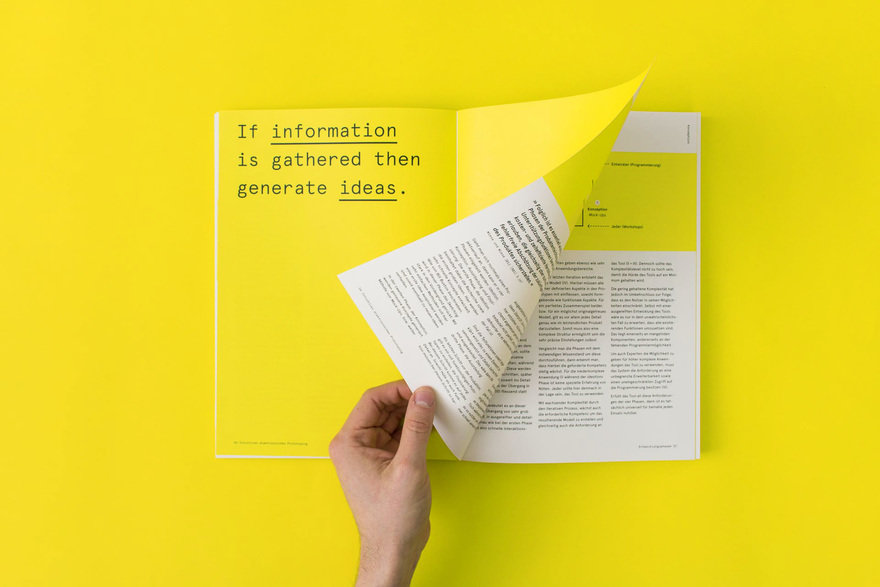 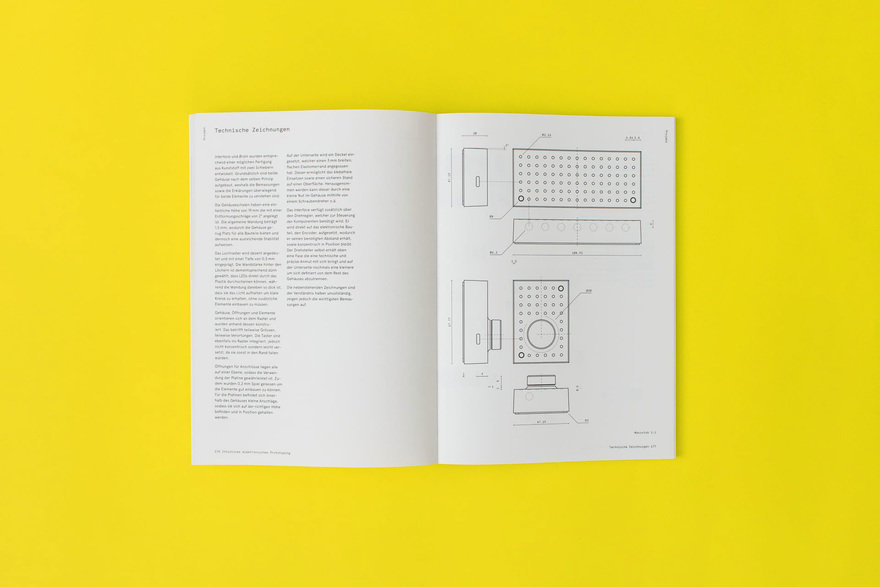 The challenge that led to this project

While studying industrial design, I sat in one of our labs. A fellow student came by, asking for help: She wanted an LED to flash when a button was pressed – actually some very simple programming of an Arduino, once you're familiar with it. Always being eager to learn to programme and to deepen my knowledge of user interfaces, I had taken an extracurricular semester in interaction design. Of course, I helped her.

This was her final prototype for an exhibition. She had never programmed before and the deadline was getting closer and closer – there was nowhere near enough time left for her to teach herself any programming skills. She wasn't the only one who approached me, though – quite a few other students were looking for help as well. Not only industrial but also interaction designers, who needed help with soldering their circuits. The reason why they were looking for support was basically the same: they had never done any soldering before and quickly needed a functioning prototype.

Going from imagination to reality

This was when I realised that there was a gap: A missing bridge between imagination and realisation that would enable people to express their amazing ideas. Of course, there are already a lot of tools on the market, attempting to fill this gap. First and foremost Arduino, which made hardware prototyping accessible to everyone: basic programming, a quick setup and the project runs. Yet the first line of code – as simplified as it might be for someone who has experience writing code – seems scary for people who have never done this before. Especially with the added pressure of having it up and running by a looming deadline.

Products like littleBits, LEGO Mindstorms or Google's Project Bloks focus on overcoming this by making learning code so accessible that even kids can easily build their ideas. But then again, these tools are very limited and for most professional use cases – such as design prototypes – not feasible. Bulky components and very limited coding capabilities make them perfect for what they want to be – a learning platform – but they are probably not the right tool for prototyping.

What is blokdots – the basics

This is why I created blokdots. It is a professional tool that provides simple programming along with tiny, pre-soldered components. The clean and simple main blok – the brain – is the heart of the tool. Here all components can be plugged in, using a simple phone jack, already known by everyone from headphones. There is no wrong way to plug them in, cables of all types already exist, making it easy to find the right length, form or colour needed. The components are already soldered onto small Printed Circuit Boards (PCBs), so they simply need to be connected. The setup is done within minutes, even without any knowledge of electrical engineering.

The second, smaller blok – the interface – just has a minimal knob mounted. With this one, actuators – such as a motor or a LED – can be tested without even opening a computer. Thus users can either test how the component works or test their prototype in a "wizard of OZ" method without having programmed one bit.

An application helps to program the prototype – the most important part. The components are selected and then connected to each other in an "if this, then that" manor. Prototypes can be set up in a manner that is similar to natural sentences: "If button is pressed once, then LED should blink three times." There is no limit to how many of those connections can be built.

To improve the workflow even more, blokdots offers a couple of other features as well. Every component can be tested within the "Live View", a window showing which components are currently connected. Here the user can test the components, play around with them, control them directly and see if they actually provide the functionality needed. It might be to test how quickly a temperature sensor adjusts its readings, or how fast a motor is turning. When the prototype has reached the right level of fidelity, it can be exported to javascript code, making it possible for people with programming skills to build upon the previous work.

This tool is not aiming to teach people how to code, it simply provides a method to let people sketch their ideas – no matter at which stage of the project. It might be right at the beginning, brainstorming in a team, building quick prototypes to realise if an idea is feasible or not worth exploring. Finding the right interaction while developing a concept, answering questions like "Is an LED the right way to indicate a specific state?" or "How many times does a button need to be pressed so it feels natural?". blokdots can also be used when building the final prototype, for a client pitch.

blokdots aims to help people explore novel ideas, enabling them with a new tool in their repertoire, while also minimising wasted time due to focussing on the wrong path and realising too late that the work should have been spent on something else. On top of that, it is a tool that provides the user with independence, enabling them to progress with the project without needing to wait for someone to help them with small experiments. All of this is to enable people to spend less money and more time to be creative, experiment and bring even more amazing projects into this world.