The atmospheric computation of our times has produced numer­ous techno-spatial hybrids, whose socio-cultural impact gets sidelined by the ever-increasing speed and convenience they afford. At the same time, few spatial practitioners today realize that every new technology is profoundly architectural, because it changes the ways in which we relate to our context – our spaces, the city and each other. In this light, this work focuses on networked devices, exploring the ways in which they affect our spatial experience and sociability through the concept of 'extended cognition', where the body and its technical exten­sions constitute an expanded cognitive medium.

Networked life creates new and distinct modes of perception and thought which become evident in our emergent techno-mediated habits – namely, habitual behavioral patterns (both personal and universal), irrevocably bound to the technologies that sustain them. Assuming a critical design approach, this work imagines a series of speculative inflatable devices that disrupt our current tech-based quirks or generate new ones, as a means to enact alternative interaction repertoires between ourselves and our environment.

Here, design fictions are used to question our usual ways of doing things and re-establish context awareness, encourage self-reflection or infuse social life with diversity and intimacy. In doing so, they attempt to shift the habitual direction of our relationship with our technologies and places. For instance, in workplaces designed to maximize efficiency and productivity, 'Lax' is a mouse that interrupts workers' stressed workflows to introduce restorative environmental stimuli and social interactions. Against the problematic habit of using smartphones while on the move, 'Detext' gently situates the users' attention in context. 'Airborne' is a personal exposure monitoring device that senses air pollution and prompts citizens to empirically map safer personal atmospheres within their megacities. 'Meetspace' is a tangible interface that exploits our habitual online 'filter bubbles' in reverse to initiate encounters that celebrate socio-political diversity in urban space. 'Z-shell' is a bedside device that restores the bedroom as a tranquil, screen-free retreat through a shared bedtime ritual. 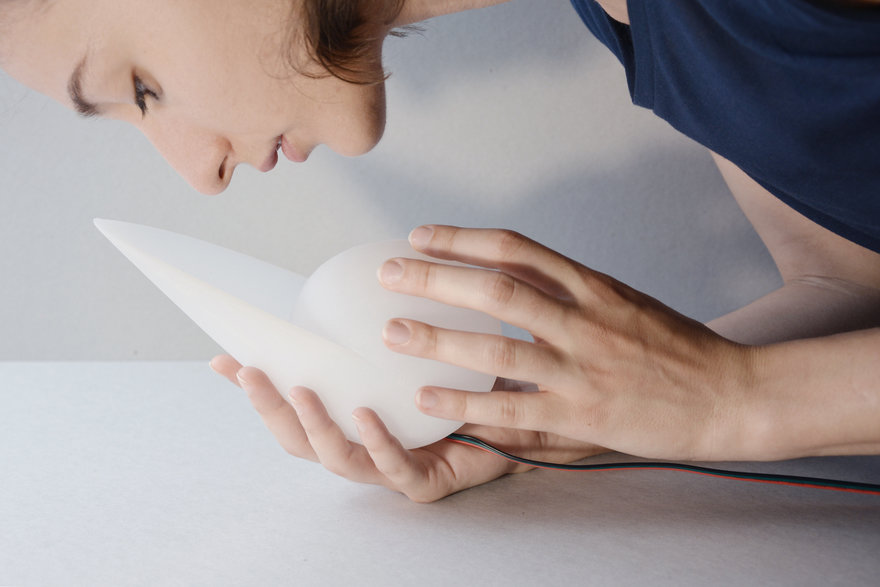 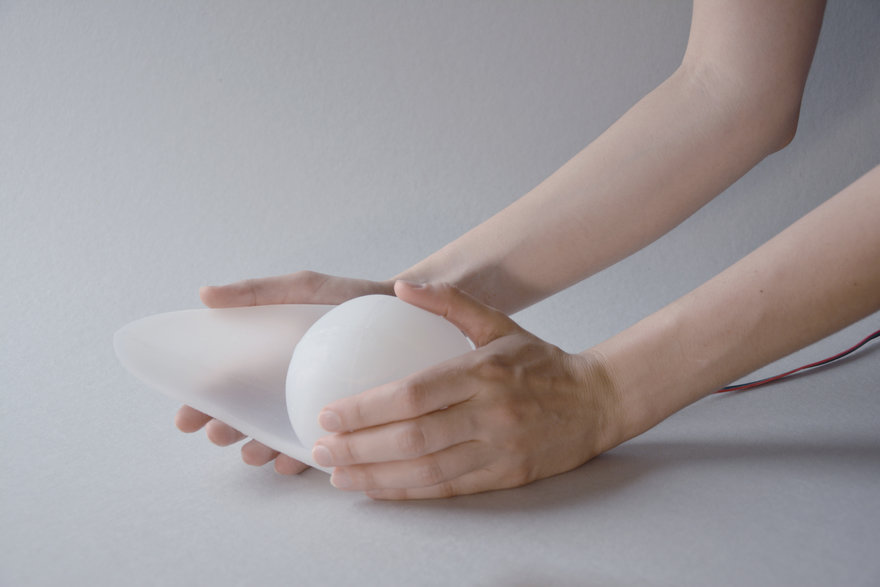 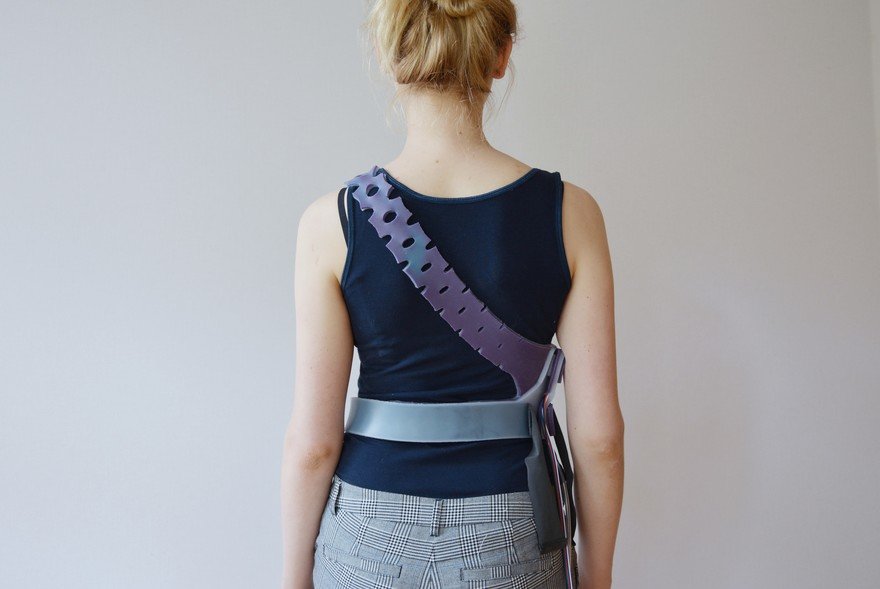 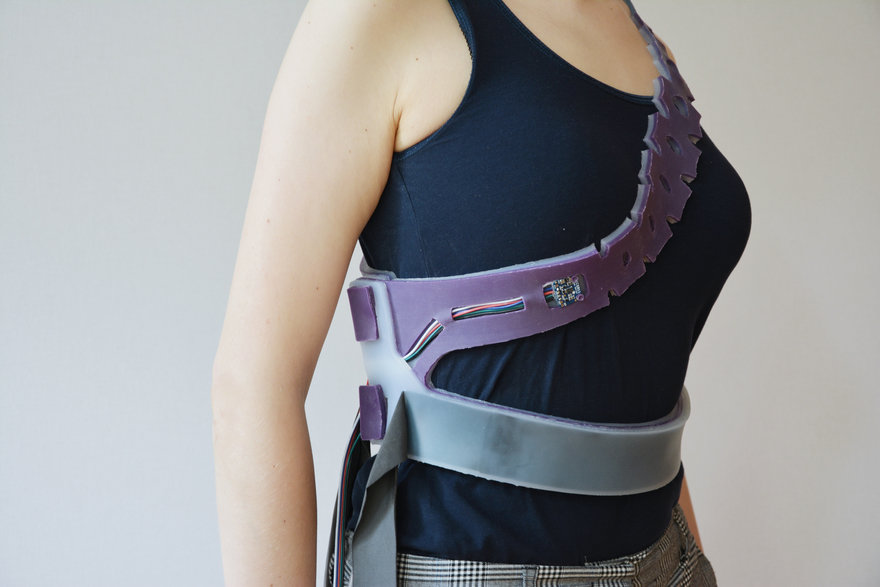 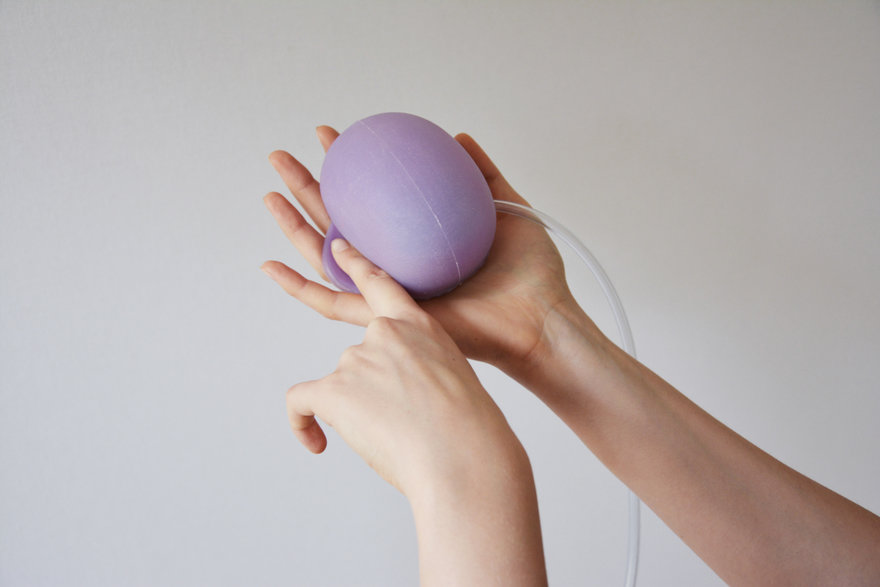 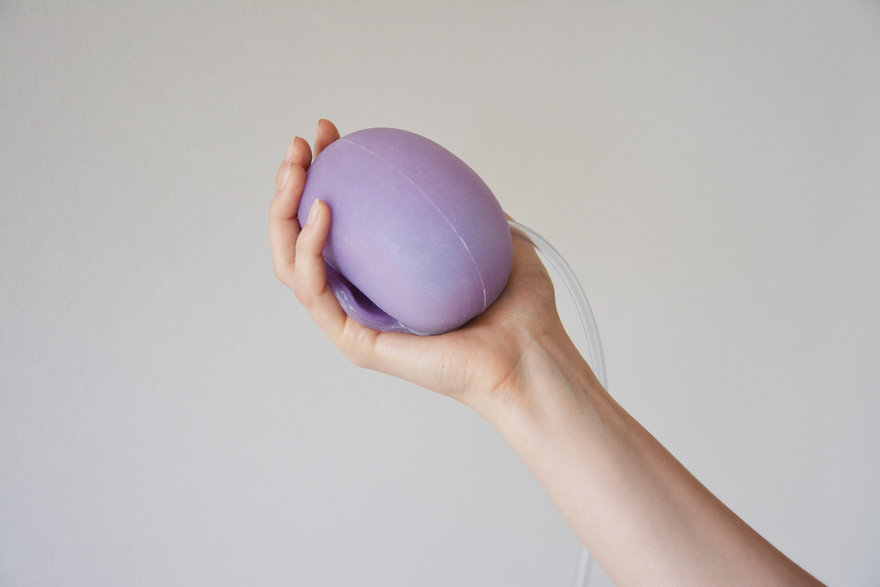 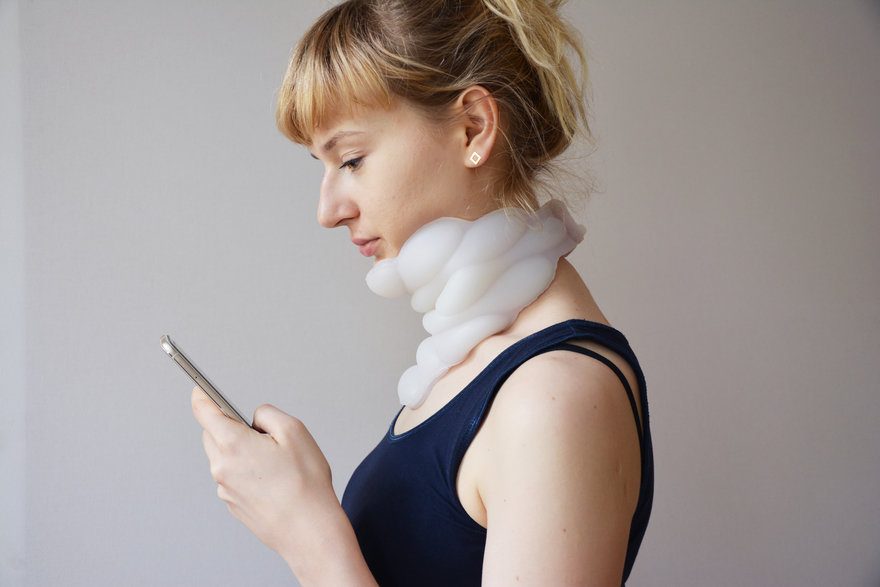 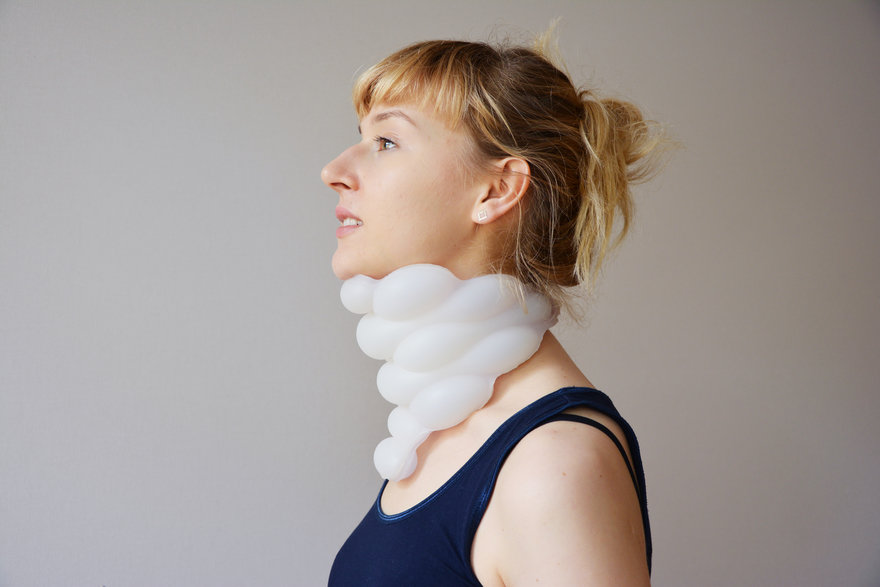 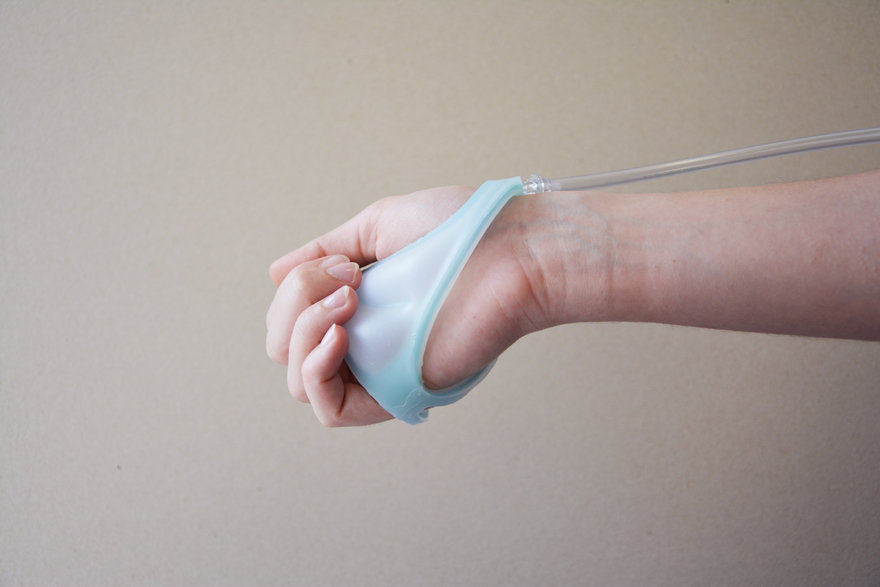 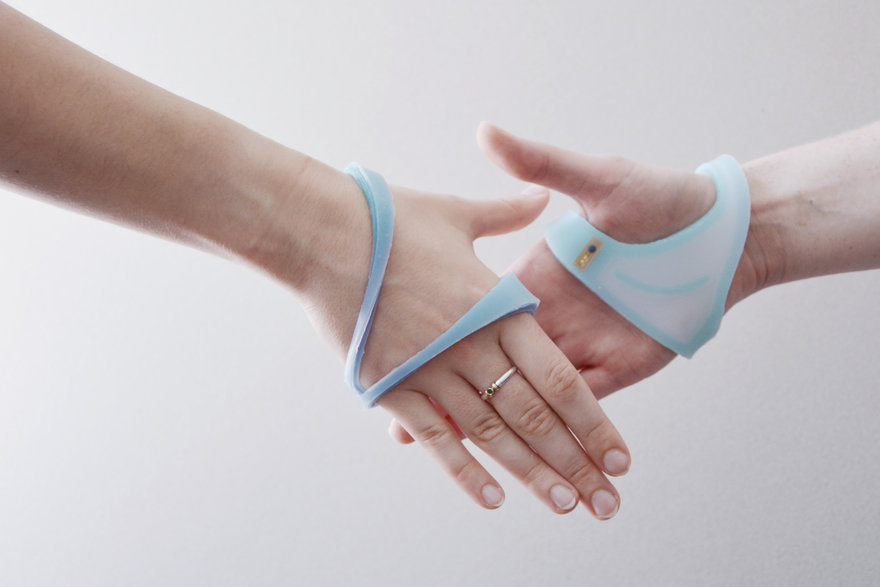 In the theoretical framework of 'extended' cognition, environments and things serve as extensions of the mind. We perceive the meaning embedded in the world around us through our sensory apparatus – which essentially makes the body, together with its technological extensions, an expanded medium of embodied cognition. For this reason, many scholars argue that today, mediated experiences change the ways in which we establish familiarity with our surroundings through our actions. When the latter mature into habitual patterns, they become further entangled with their specific devices and contexts, contributing to a diverse ecology of techno-mediated habits.

Discussing networked objects, Dan Hill argued that we find ourselves "changing what our bodies do in entirely emergent, or at least unplanned, everyday fashion" to harvest their affordances (Hill 2012). Mapping this phenomenon in an open-ended manner, he concluded that the body's relation to space has been diversified. One thing is certain; with the proliferation of mobile media and ambient technologies, hardware is no longer 'heavy', neither is software 'light'. As the heaviness of hardware dissolves, Hill noted, the next "vessel" to hold the increasing weight of software and virtual information might as well be that of the body.

In the meantime, the interaction schemes of our technologies are constantly informing the gestural vocabulary of our body language. For instance, the gesture of rotating may originate from screwing to adjust the intensity of a grip, the one of tapping might come from that of pointing out details, and so on. Apart from such 'digital' gestures that build on our familiarity with the world, there are also those that are entirely new and have to be learned, while others might emerge from the end users' reappropriation.

To probe into the most prominent aspects of networked life, this work frames five settings that identify similar tech-based behavioral and social phenomena, tracing their origins, current states, and potential futures. Each setting concludes with one of the speculative devices that follow.

Against the backdrop of the contemporary workplace, the first setting considers the role of the mouse as the cognitive lever behind digital labor. The mouse is an important control tool that inhabits our palms for hours every day. Yet, it has barely changed since its invention, becoming the classic, reliable object all of us are very familiar with. Thanks to its pertaining characteristics, the mouse withdrew in the background of our virtual work, thus allowing it to emerge in the fore­ground. In Heidegger's words, it is an instrument ready-to-hand that resides in the periphery of our awareness.

What if the mouse extended the realm of its agency into the physical world? Lax gauges one's psychological state by their heart rate, measured at the thumb through an embedded biometric sensor. When stress accumulates, Lax suddenly inflates and becomes unusable. By canceling its own affordances, the mouse disrupts the work­flow and claims attention, momentarily becoming present-at-hand as a defective tool would. At this point, its usefulness shifts from an ability for virtual impact to a psychological one; that of offering a contemplative distance by mitigating overwhelming issues and preventing rushed decisions. In doing so, it redirects one's attention to their workplace, opening opportunities for decompression, recollection and socializing. To get back to work, one has to take a much-needed break and relax – possibly with the help of the stress ball in hand.

The second setting touches on the pitfalls of the attention economy and considers a more sustainable approach. Although networked devices augment our spatial experience, they often absorb our attention to the extent of diluting our context awareness. Detext is a wearable device that attempts to situ­ate one's focus to their immediate surroundings and their own body by disrupting the problem­atic habit of using handheld devices while on the move.

Detext maps the direction of one's visual focus according to the compression of an embedded flex-bend sensor. Also, when paired with a mobile device, it uses its location-tracking feature to identify one's mobility status. If one is walking, or worse, driving inattentively for more than a couple of minutes, Detext inflates smoothly to give the wearer a literal 'heads-up'. Apart from interrupting one's distracted state, it also corrects poor posture.

The third setting touches on possible ways that mobile media may reframe the body as an environmental agent. Most of us are unaware of what exactly is in the air we breathe when we traverse our congested megacities. As a wearable extension of the respiratory system, Airborne provides embodied feedback on the urban atmosphere in an attempt to pres­ent air pollution not only as a very personal problem, but also as a wider cultural issue.

If the levels of Volatile Organic Compounds (VOCs) exceed safety limits, the belt inflates and briefly restricts one's diaphragm, the primary muscle of respiration. In doing so, it prompts the wearer to leave safely – that is, slower than faster. For this reason, one's breathing pattern is tracked through a strip of embedded conductive fabric. In case of hyperventilation, the belt pulsates in a normal respiratory rate as a reminder to slow down.

The fourth setting considers the diverse effects of online platforms on socio-political diversity, both online and in urban space. As personalization algorithms cater our web experience to our habitual activities, it becomes increasingly unlikely to encounter people online that could challenge or diversify our belief system and sense of self. Worse, we are rather unaware of the complexity filtered out of our virtual microcosm. Thankfully, this is not possible in meatspace, and for a few good reasons. As individuals, we are shaped by our exposure to difference. The absence of the Other compromises our self-awareness and our ability to empathize. If our online activity gets compiled into data portraits, how could we reappropriate them to burst the 'filter bubble' they condition and engage with the Other in person? Meetspace is a device that offers a body-based mismatch-making service.

Each Meetspace glove contains an embed­ded RFID tag, linked to the wearer's online data portrait. When worn in public, it scans one's immediate proximity for people who are significantly different from oneself. In that case, Meetspace acts as a 'diversity sensor' and informs each wearer of the Other's presence; the glove inflates, alluding to the sensation of another hand during a handshake – the shared gesture that symbolizes the beginning of a personal relationship. Meetspace intends to act as an ice-breaker for spontaneous encounters with complete strangers, updating our code of conduct accordingly. However, whether a conversation will eventually happen or not is entirely up to the people involved. Will they grab the opportunity to meet someone radically different? Is the prospect of an unpredictable social exchange intriguing enough to make people leave their comfort zone in public space? If both strangers extend their hands, the gloves detect each other and deflate, allowing for a firm handshake to take place. Yet, some people might choose to ignore the opportunity to socialize and walk away – but they will do so, being aware of the social diversity of the context they find themselves embed­ded in.

The final setting explores a new genre of networked intimacy that interconnects people and technologies. Network dynamics have infiltrated the bedroom, the home's most private core, converting it into a hyperactive field of work and leisure. The habit of going to bed with our devices echoes an inner need to be more – productive, entertained, connected, or simply comfortably distracted. Z-shell is a device that restores the bed as a tran­quil retreat through a shared bedtime ritual.

Z-Shell uses breathing exercises as a means to practice a mindful presence. To begin, one may simply breathe into the device's concave part, where an embedded temperature sensor will soon identify a respiratory rate. Then, it performs the breathing exercise in one's hands, turning it into a simple reflex response. Once the exercise session is over, one's own device resets back to a deflated state, but another one somewhere else may inflate in response and await its owner to engage in his or her own time. Thus, Z-shell enables an asynchronous but shared bedtime ritual that allows for a new kind of embodied, non-verbal communication to emerge from a distance.

This work used speculative design practices to suggest that different relationships to our networked technologies are possible. However, the produced prototypes do not present themselves as answers, but rather as contributions to the debate that might shape them. In fact, many of the pressing issues that this work is concerned with could only ever be resolved on a socio-political level – but the seeds of collective arguments are sown by engaged individuals. To claim a common future of constructive media and spatial practices, it is crucial to be self-critical of our techno-mediated habits, to challenge the designated use of our tools, and to attend better to our context, but also ourselves.