"MeToomentum" is a self-initiated data visualization project exploring themes, geographical footprint and key moments of the popular social Movement #MeToo. In a World where sexual abuse and workplace harassment are too common, this online dialogue has become a powerful international movement that shed a light on the magnitude of the problem.

We explored themes and global reach of about two hundred thousand tweets containing or related to the hashtag #MeToo. Covering the movement's first six months, we encoded our findings in a series of three visualisations that resemble the anatomy of a dandelion. Although considered a pest, for its ability to spread and grow anywhere, the common dandelion is a beautiful and complex flower which has been used in popular culture to symbolise: endurance, growth, and the possibility of change.

#MeToo marks a time when Twitter and other social media have become a platform to unfilter and reshape cultural biases. Our project is intended as an archive – we wanted to capture the momentum (from Latin -mentum) the MeToo Movement gained and we wished to celebrate the bravery of all the people who spoke up, sharing their personal and difficult experiences to provide the possibility for change.

"MeToomentum" was exhibited in London as part of the Data Obscura exhibition – curated by Signal Noise, and part of The Economist's Open Future initiative. It also lives online at metoomentum.com 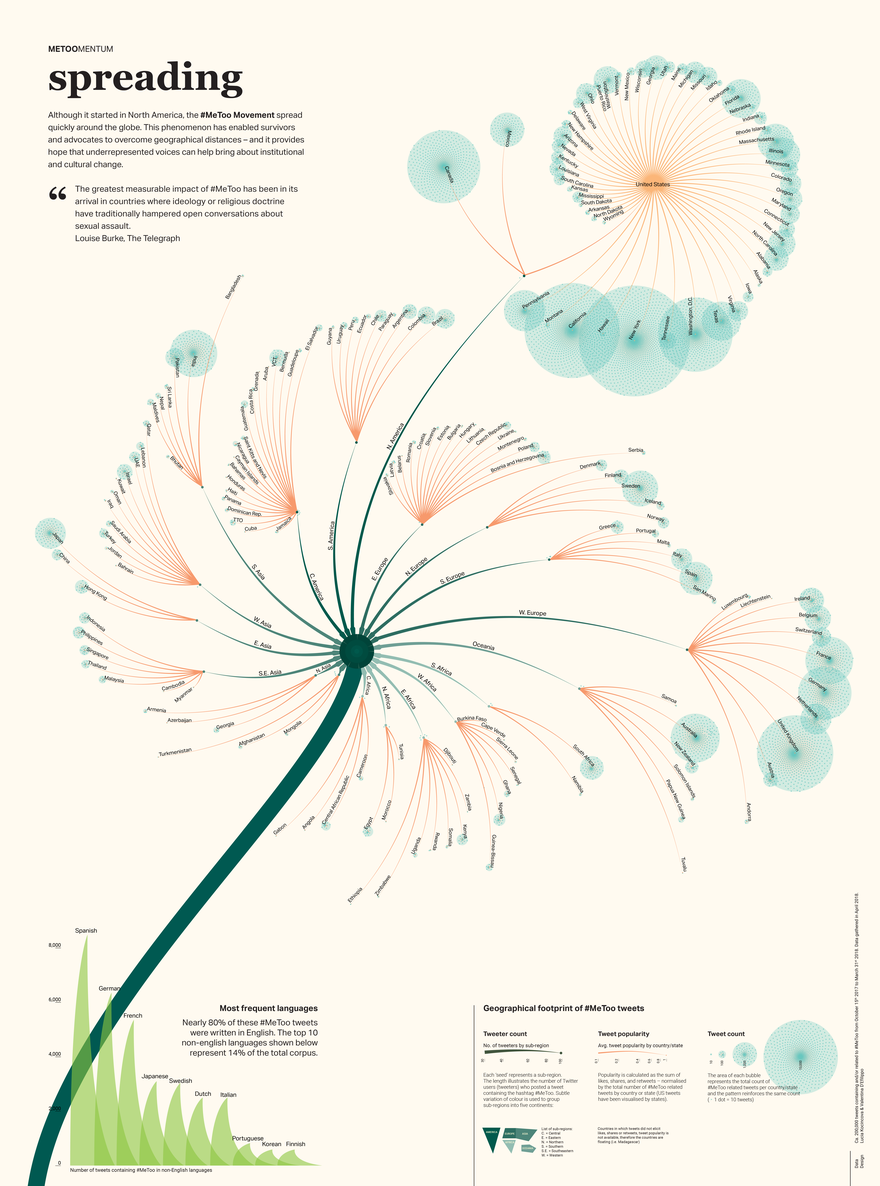 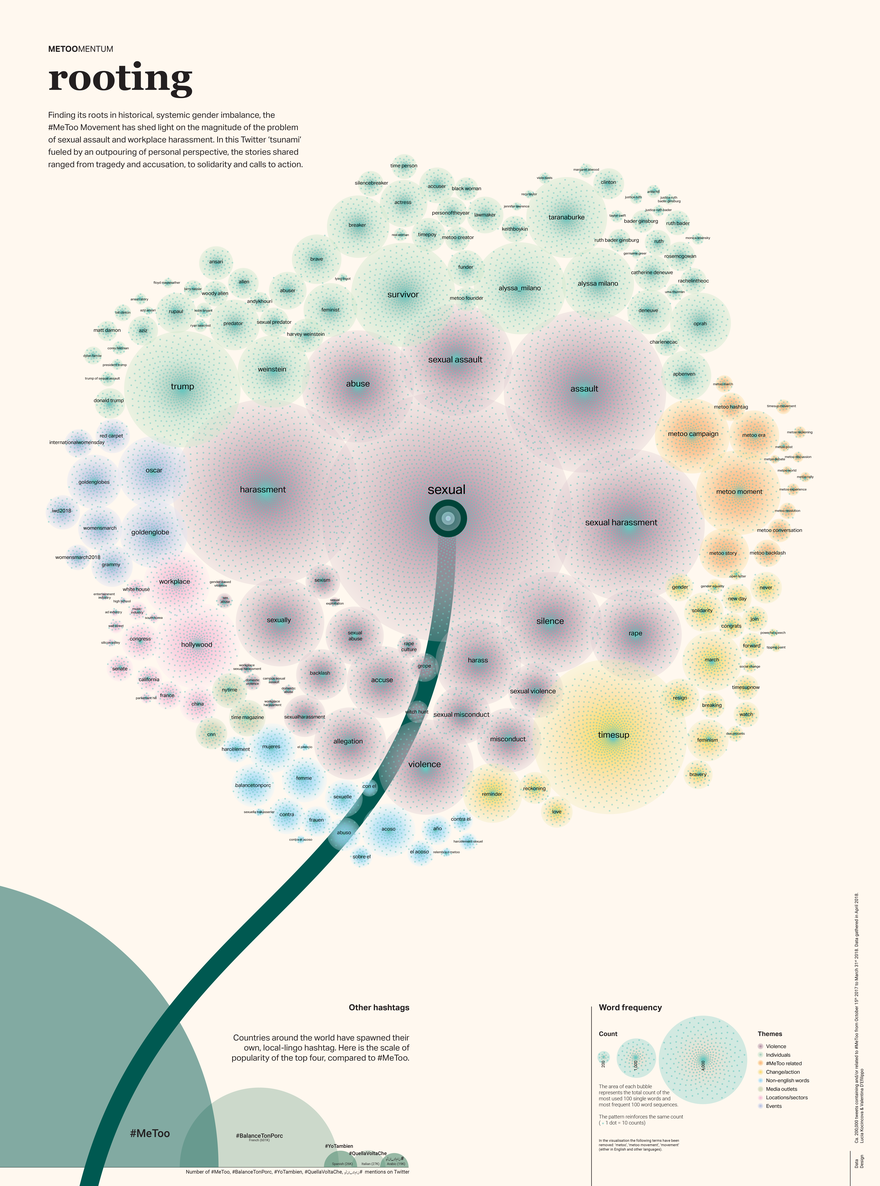 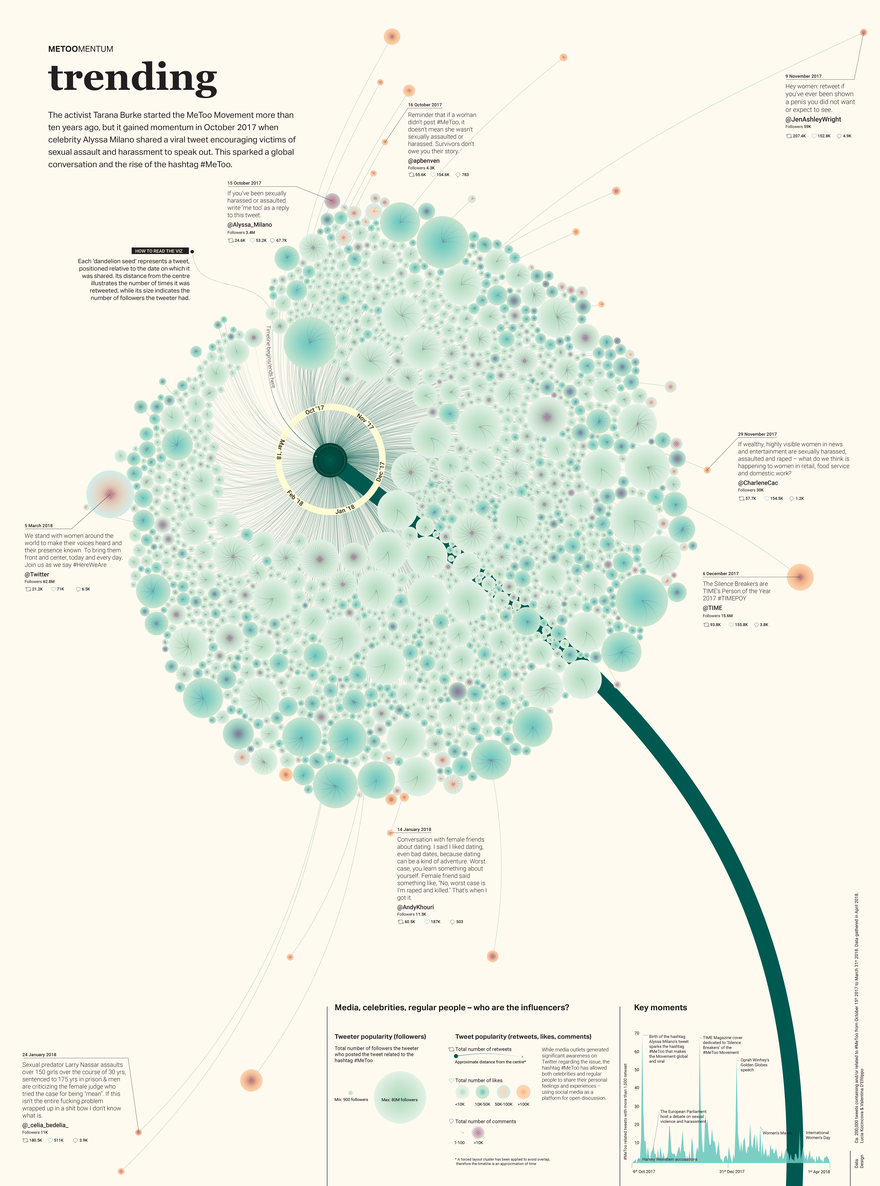 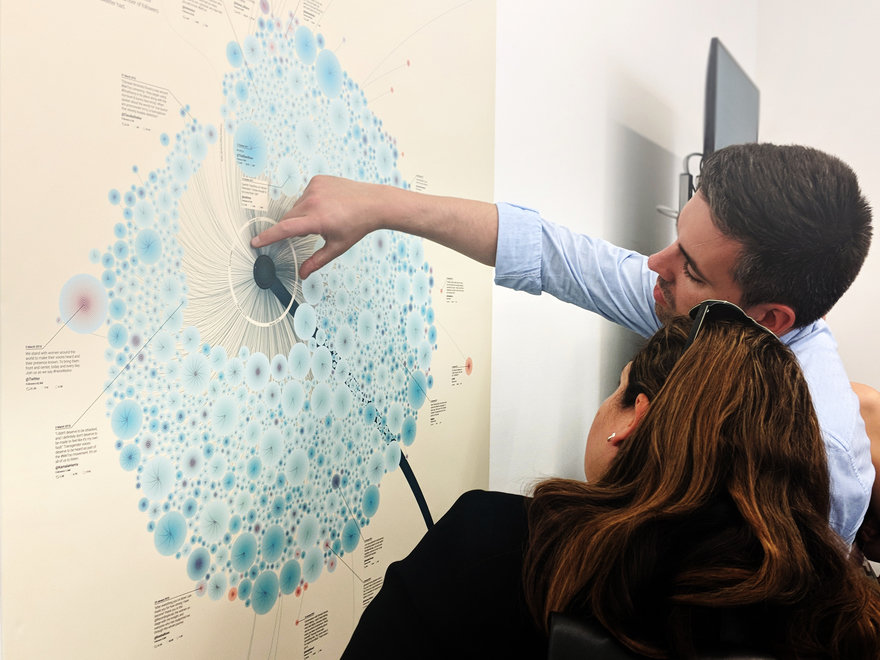 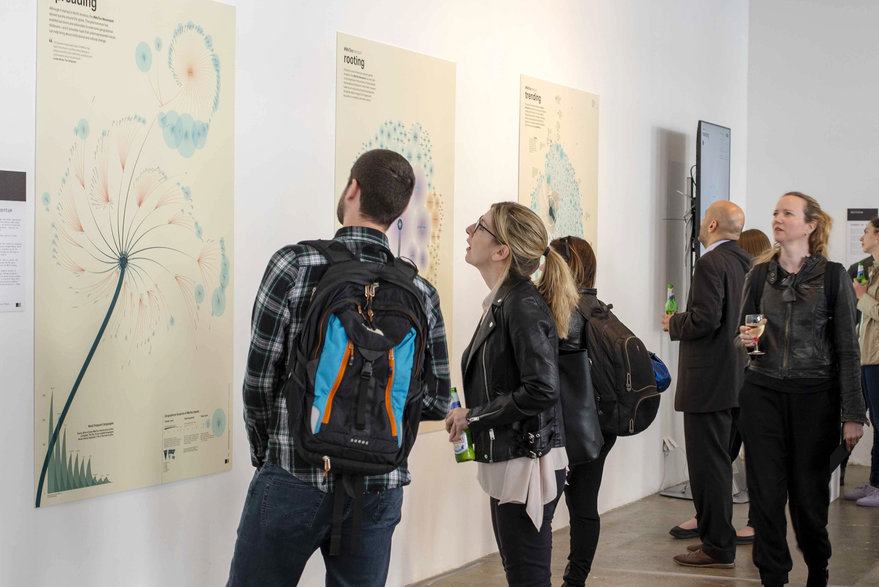 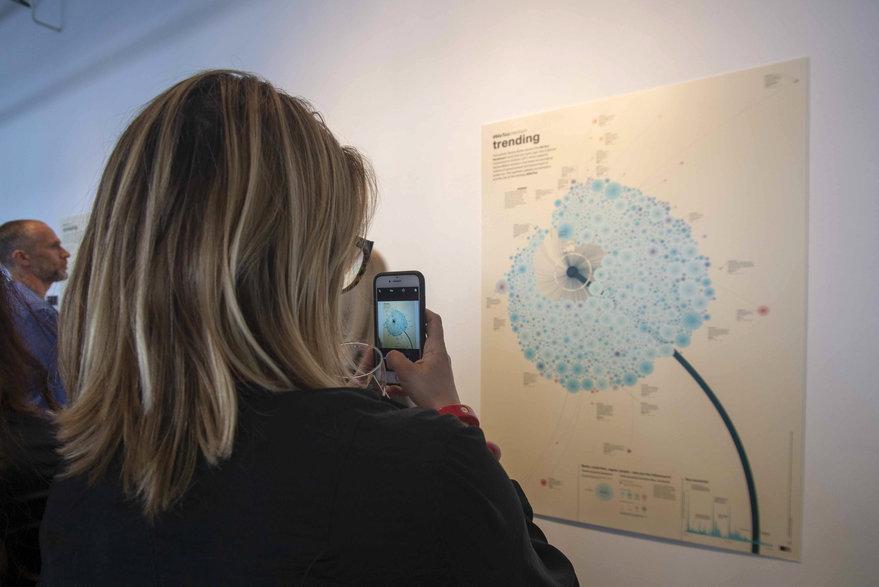 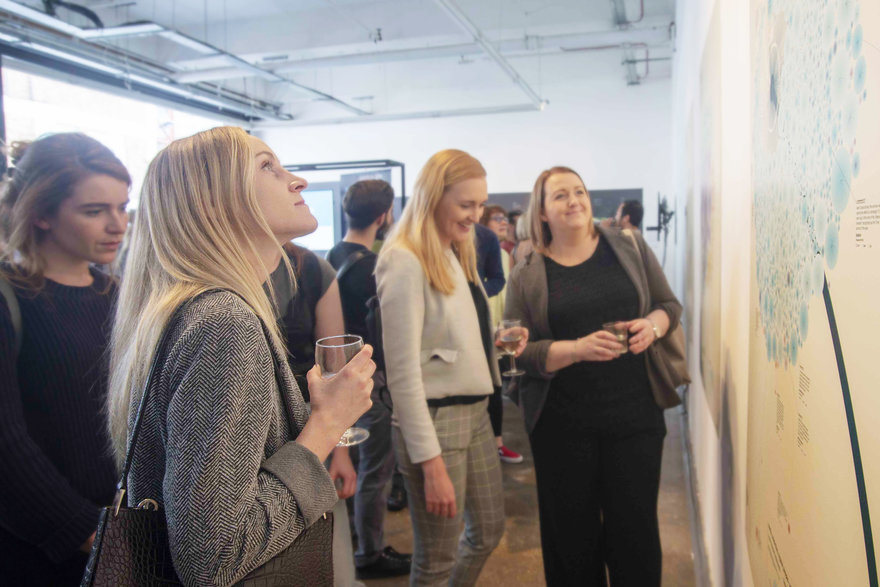 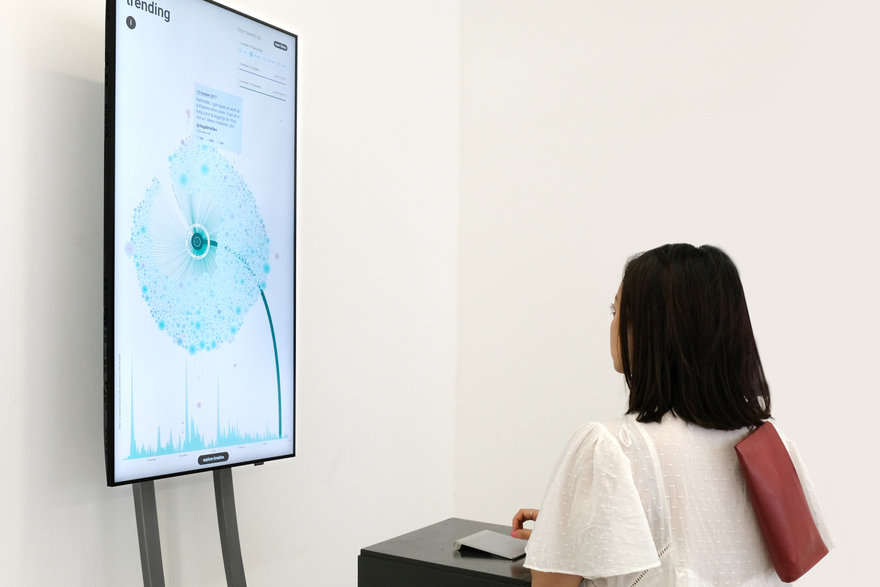 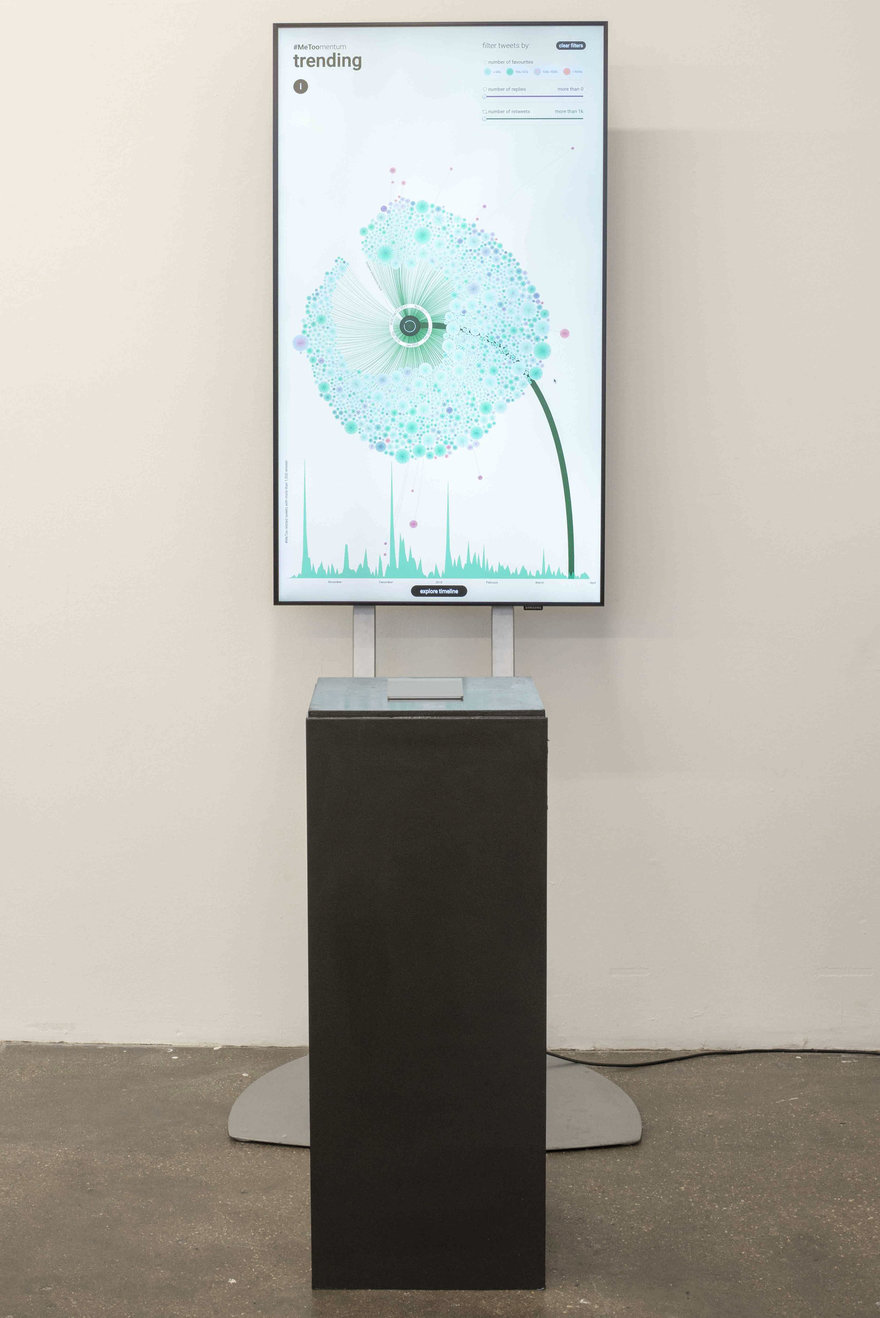 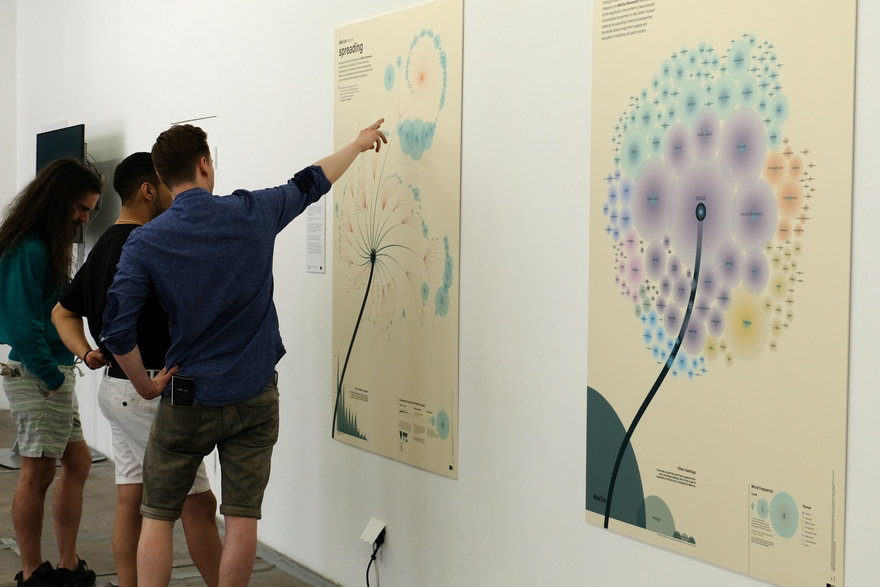 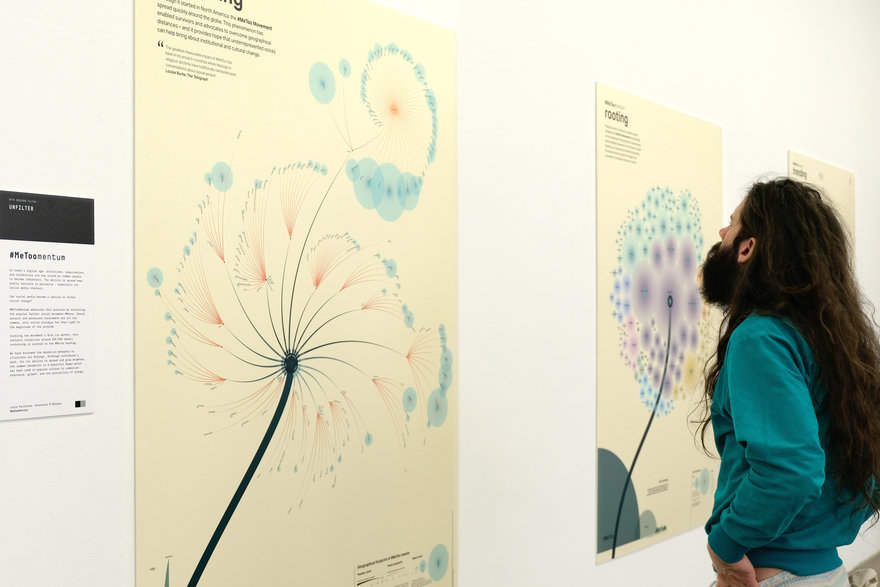 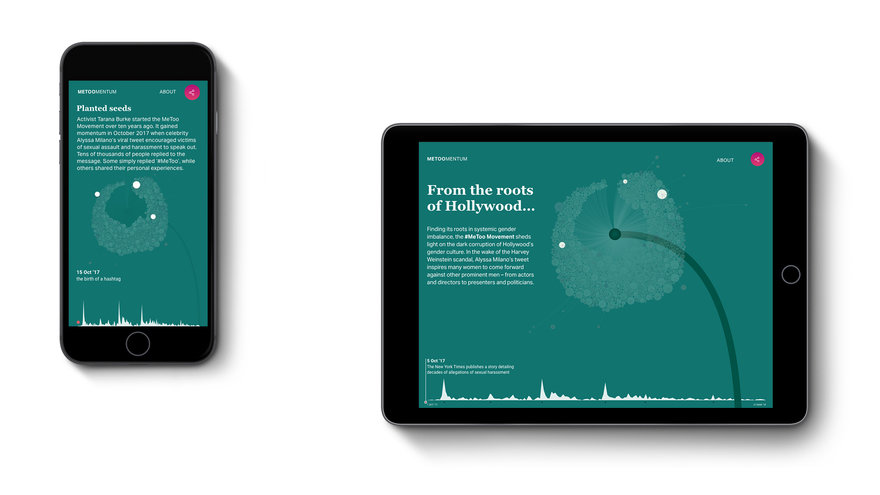 Can social media become a vehicle to foster social change? MeToomentum addresses this question by dissecting the popular Twitter social Movement #MeToo. Sexual abuse and workplace harassment are all too common, this online dialogue has shed light on the magnitude of the problem.

Focusing on the movement's first six months on Twitter, this visual analysis dissects about 200,000 tweets. We borrowed the dandelion metaphor to illustrate our findings. Although considered a pest, for its ability to spread and grow anywhere, the common dandelion is a beautiful flower which has been used in popular culture to symbolise: endurance, growth, and the possibility of change.

Each of the three visualisations addresses a different question:

1. Who were the influencers in the #MeToo Movement?This dandelion illustrates tweets with more than 1K retweets and their popularity – comments, likes and retweets.

In today's digital age, politicians, organisations, and celebrities are now joined by common people to become influencers. The ability to spread news and/or opinions is pervasive, especially via social media channels.

2.Where did the #MeToo Movement spread?

This dandelion shows the geographical footprint of the MeToo Movement.

Although it started in North America, the #MeToo Movement spread quickly around the globe. This phenomenon has enabled survivors and advocates to overcome geographical distances – and it provides hope that underrepresented voices can help bring about institutional and cultural change.

3. What themes is the #MeToo Movement rooted in?

This dandelion visualises the most frequent words and themes.

Finding its roots in historicaland systemic gender imbalance, this Twitter 'tsunami' has been fueled by an outpouring of personal perspective, the stories shared ranged from tragedy and accusation, to solidarity and calls to action.

The project outcomes are three static visualizations and one interactive data narrative that walks users through the key events of the first 6-month since the beginning of the movement.