Life in Los Angeles is largely defined by the neighborhoods we most often experience, likely near work and home. This can lead to a skewed and unrealistic vision of how others experience the same city. It can be a completely different city for them. "No Justice, No Peace: LA 1992" presents largely overlooked but critical moments in the modern history of Los Angeles. Taken together, they provide an overview of the fabric of our city aimed at helping the visitor piece together the fragments that led to the uprising in the spring of 1992, when the acquittal of four white police officers who had beaten a black man, Rodney King, provoked six days of violence.

In telling the story of this event the design includes materials that are common throughout the city, a reminder of the place we share and how our city always is changing. The primary feature is the central raw particleboard structure that resembles the shape of dwellings in postwar housing tracts. This element serves as an analogy for the physical city of Los Angeles across time. It's surface provides space for overlooked stories that contribute directly to '92. A series of angled walls that interrupt the structure and reach out to the gallery walls, stand for the events that would cleave the city along racial lines and lead to the '92 Uprising.

Cinderblock is used to evoke the physical and psychological walls that separate us from one another and shape our experience of this city. The police cruiser presents force and presence and the fraught relationship that existed at that time between law enforcement and the black community and provides space to consider how that relationship continues to evolve today. Large-scale photographs on the gallery walls reflect on the scale of the devastation from the riots and the scale of the problem that confronted the city at that time and continues today through endemic poverty, joblessness and homelessness.

"No Justice, No Peace" is unflinching in its depiction of the damage rioters did to innocent people and property, but it rejects the idea that riots are random chaos without purpose. Photographs, text, media and artifacts provide a complete picture of the history that led to '92, for example this stark statement of discrimination: "No part of any lot shall ever at any time be used or occupied or permitted to be used or occupied by any person not of the white or Caucasian race— Los Angeles City Housing Declaration of 1942".

The exhibit is a window to modern Los Angeles, offering an opportunity for us to explore what has changed 25 years since the uprising. It ends with this question: "In the midst of today's political climate, how can we bring change to unify ourselves?". Visitors are encouraged to leave behind their ideas on wall tags for how to bring about positive change. 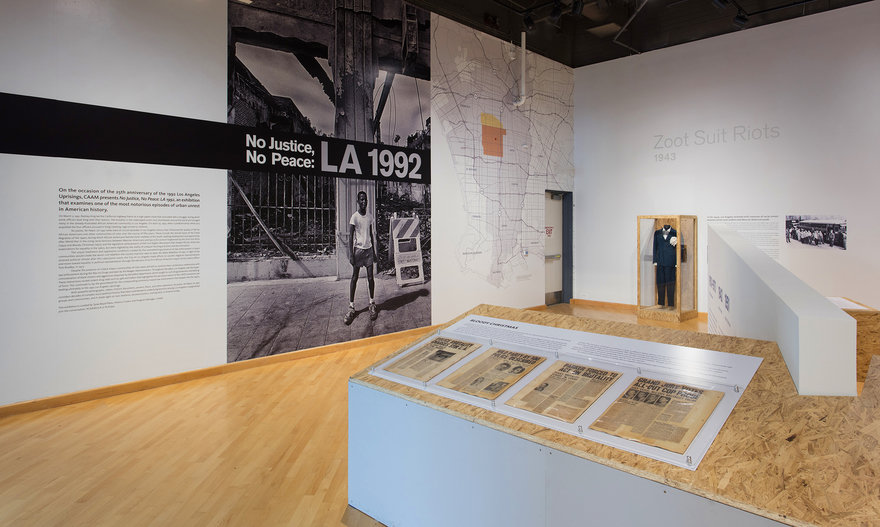 LA 1992 Install 1 The visitor's introduction to the exhibit, a boy standing in front of the burned out remnants of a storefront and a map to place the visitor in LA. Brian Forrest 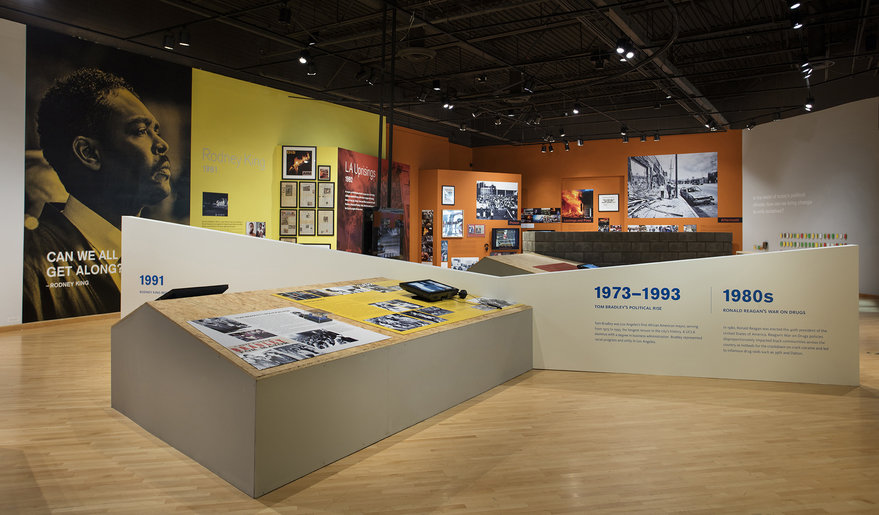 LA 1992 Install 2 The primary feature is the central raw particleboard structure that resembles the shape of dwellings in postwar housing tracts. Brian Forrest 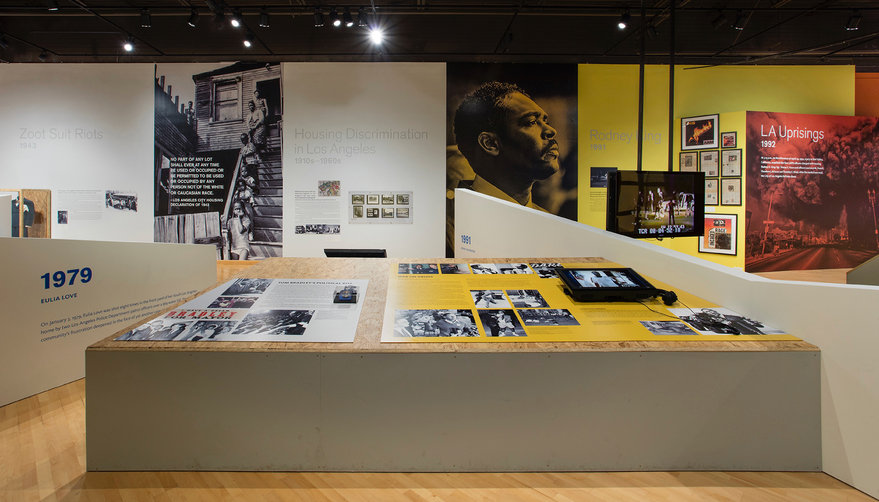 LA 1992 Install 3 The surface of the central structure provides space for overlooked stories that contribute directly to '92. Brian Forrest 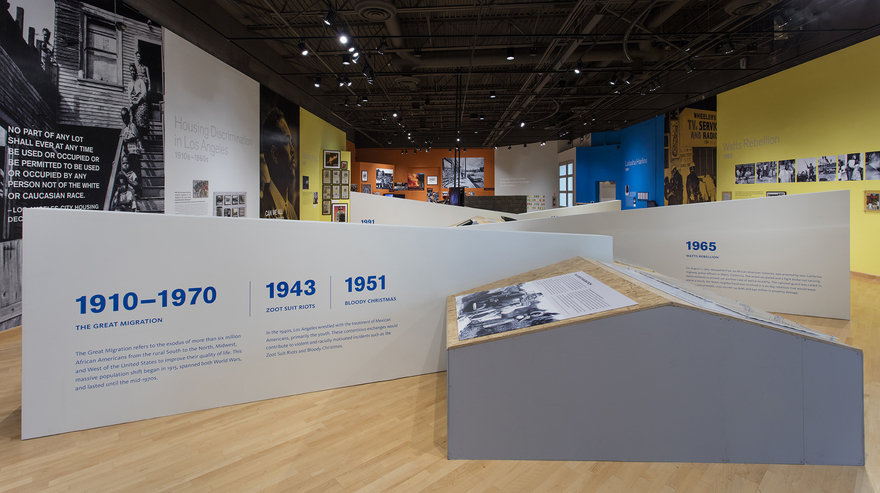 LA 1992 Install 4 A series of angled walls that interrupt the structure and reach out to the gallery walls, stand for the events that would cleave the city along racial lines and lead to the '92 Uprising. Brian Forrest 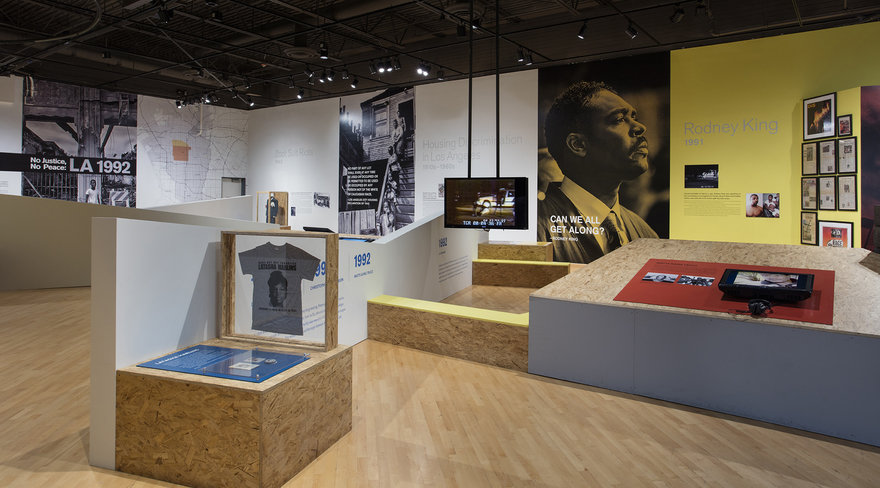 The intertwined stories that led to the '92 Uprising are presented using images, media, artifacts and text. Brian Forrest 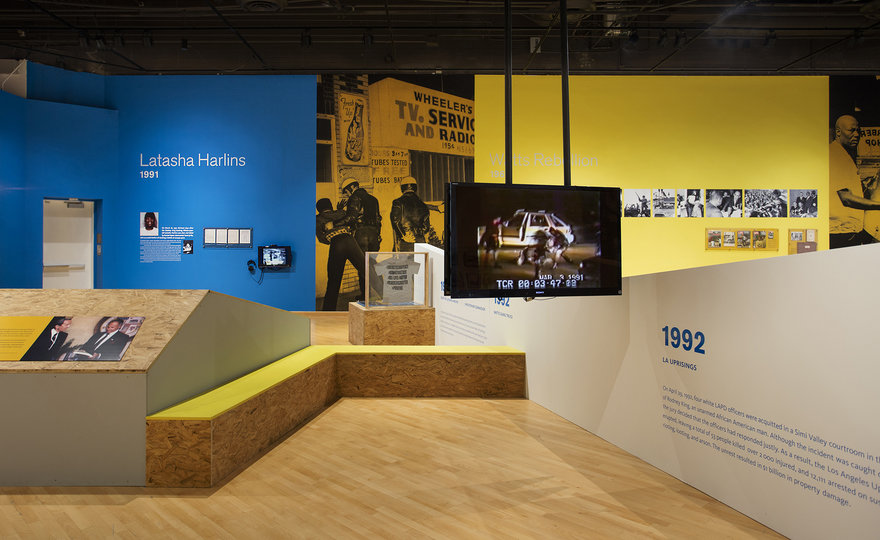 LA 1992 Install 6 The seating area to view the video of Rodney King's beating provides space to reconsider the importance of this event in the history of LA. Brian Forrest 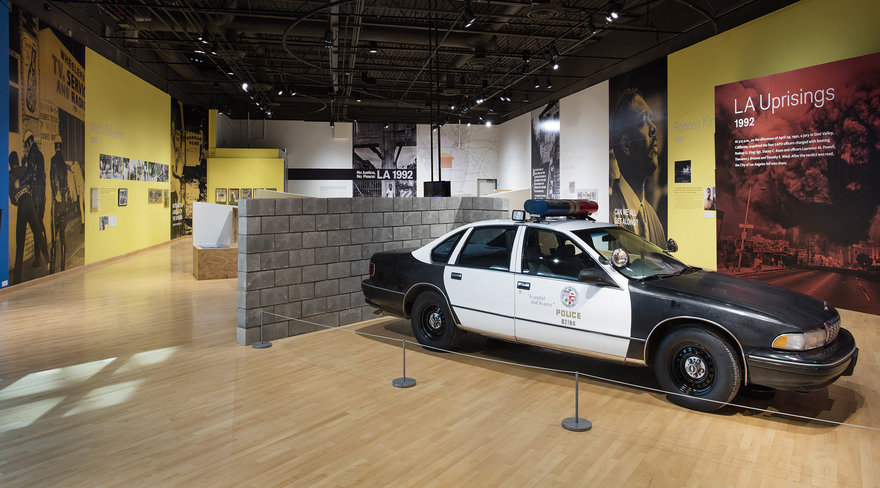 LA 1992 Install 7 Cinderblock evokes the physical and psychological walls that separate us from one another and shape our experience of this city. Brian Forrest 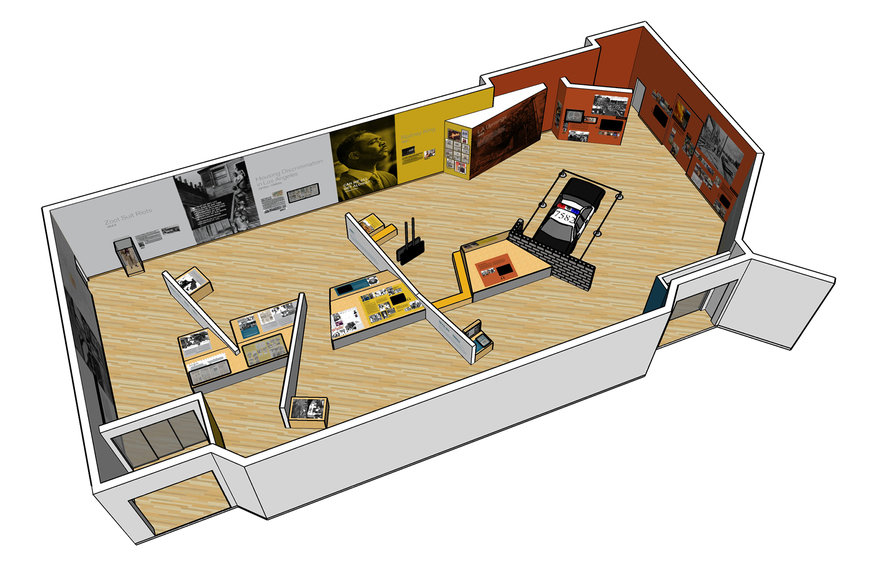 The historical vantage point for this exhibit is a comprehensive look at pivotal events that have impacted and shaped communities of color (Koreans, Latino, etc.) in Los Angeles, especially for African Americans in 1992. Recognizing how many of these communities were impacted by '92, the exhibit strives to convey how the L.A. riots weren't simply a spontaneous explosion, but were the result of years of compounding resentment to racial discrimination, policy, and historically negative interactions with police. The exhibit aims to convey the wide ranging experiences of those living in Los Angeles who were directly impacted by the riots and those events leading up to it while also considering how the event was viewed and portrayed outside of the city.

The design team had 8 weeks to execute the design and fabrication. The scope included 2D design, 3D design, lighting design, organization and presentation of artifacts and all media elements, database creation and asset management, project management, print coordination, fabrication and installation supervision. Given the short timeframe and the breadth of content, the team had to rapidly understand the overarching content organization to effectively focus the story.

We quickly settled on the analogy of walls, both physical and psychological throughout the city that prevent us from seeing and understanding each other. This results in a fragmented city and an incomplete picture of the people who may be physically near you but are effectively living in an entirely different city. The walls of the exhibit prevent you from seeing the whole picture. They allow for glimpses of what's coming and represent events along the timeline of LA, events that would cleave the city apart and lead inevitably to the Uprising in 1992.

The gallery space has a clear entrance on one end and exit at the other so it made sense for the content to flow from one end of the space to the other. This requires the visitor to move across the room multiple times to view all of the content. The central structure that represents the city is therefore split at key points by the angled walls to both call attention to that moment in time and encourage visitors to flow across the room and explore the stories.

The project timeline and budget led to the consideration of simple and unfinished materials. These include, particle board, cinderblock, concrete and chain link fencing. The fencing was not used and concrete is represented with paint. These are materials that are seen throughout the city everyday, most often as walls or on construction sites. It was very important to select materials that represent the physicality of the city as the city became a participant in the riots through it's physical design and planning. These materials in the city are so common that they become largely invisible and yet they define much of our experience of the city. In the exhibit, the city represented by the commonness of these materials provides the background that allows the content to come forward so the visitor can focus on the stories.

The content is presented at multiple levels. The large scale wall graphics and colors define the primary events that define this time in LA history and divide the wall space. The angled walls that interrupt the central structure point to these events on the gallery walls. The surfaces of the central particle board structure provide simple spaces to present the smaller stories that some visitors are not familiar with. The artifacts and media are presented in a straightforward manner to allow the content to speak for itself.

Martin Luther King Jr. defined a riot as the language of the unheard. This definition is an important touchpoint in understanding the goals of the exhibit. In 1968, he said, "But it is not enough for me to stand before you tonight and condemn riots. It would be morally irresponsible for me to do that without, at the same time, condemning the contingent, intolerable conditions that exist in our society. These conditions are the things that cause individuals to feel that they have no other alternative than to engage in violent rebellions to get attention. And I must say tonight that a riot is the language of the unheard. And what is it America has failed to hear?...It has failed to hear that the promises of freedom and justice have not been met. And it has failed to hear that large segments of white society are more concerned about tranquility and the status quo than about justice and humanity."

In Los Angeles, what went unheard was the uproar of the minority community for over a year regarding two tragic events and their aftermaths - the 1991 killing of Latasha Harlins and the near-acquittal of the storekeeper who shot her, plus the video taped beating of Rodney King and the acquittal of all the police involved. It was the acquittal that triggered the 1992 Uprising.

Given the current state of the country and the series of recent events in Ferguson and elsewhere, the exhibit design hopes to move the conversation forward and help those of us not directly impacted by the riot understand the context that brings the riot to the surface. The design had to weave together challenging moments in our shared history and overlooked stories from the history of Los Angeles to provide a space that fosters a better understanding of where we've come from and reflects upon the current challenges that we face.