CycleHack is a global movement on amission to make the world moresustainable through reducing the barriers to cycling. By taking a grassroots approach to innovation we are tooling up citizens to take a pro-active, DIY approach to making cycling easier, more fun, and accessible. We believe that through empowering individuals,organisations and governments to collaborate, share skills and prototype new ideas around cycling, we can build a healthier, more active and sustainable world.

Since we started in 2014, we have been catalysing aglobal movement of CycleHackers, a dynamic communityof people who have participated in our events. In 2014 we delivered the first Global CycleHack based from Glasgow and taking place in Beirut and Melbourne.

By the close of 2014 had developed our first CycleHack product, 'Penny in Your Pants' and had released our open call out where within 2014, 35 global CycleHack locations had signed up from Bangalore to Mexico City, Sydney to Vancouver.

Our secondary success within 2014 was the viral product video for Penny in Yo Pants.

Penny in Yo' Pants is a great example of the power of CycleHack.Using a coin and a rubber band, this simple idea makes it possible to secure the front and back of your skirt together, ensuring it doesn't fly up in the wind or leave you exposed when getting on and off you bike. A simple yet revolutionary idea to make any skirt bikeable, the film showcasing this cyclehack has reached
3.2 million viewers and has been featured in publications all over the world from Cosmopolitan Magazine to The Telegraph.

More importantly, it has made a real difference to the journeys that women make and the Penny in Yo Pants team received tweets and videos from all over the world from woman using the innovation .

CycleHack is supporting the team in developing a slicker product to
raise money for the Afghan's Women's Cycling Team via their Pennyforgood Foundation, which is coming to market in May 2015.

SARAH DRUMMOND DIRECTOR OF DESIGN AND INNOVATION Sarah is a Google Fellow and the co-founder of award winning design agency Snook in Glasgow. Sarah has led over 100 projects in the design and innovation field. Her skills and expertise cover product design, service design and business model innovation and has been running Snook for the past 6 years.
MATT LOWELL DIRECTOR OF GLOBAL AND NETWORKS Matt is a user-centred designer with a passion for using design as a tool for social change.
JO HOLTAN DIRECTOR OF COMMUNICATIONS Johanna has spent the past 10 years working on development projects in Scotland, America, Jamaica, Mexico, and the country Georgia. Jo fulfils a post at the Edinburgh University as head of strategic projects. 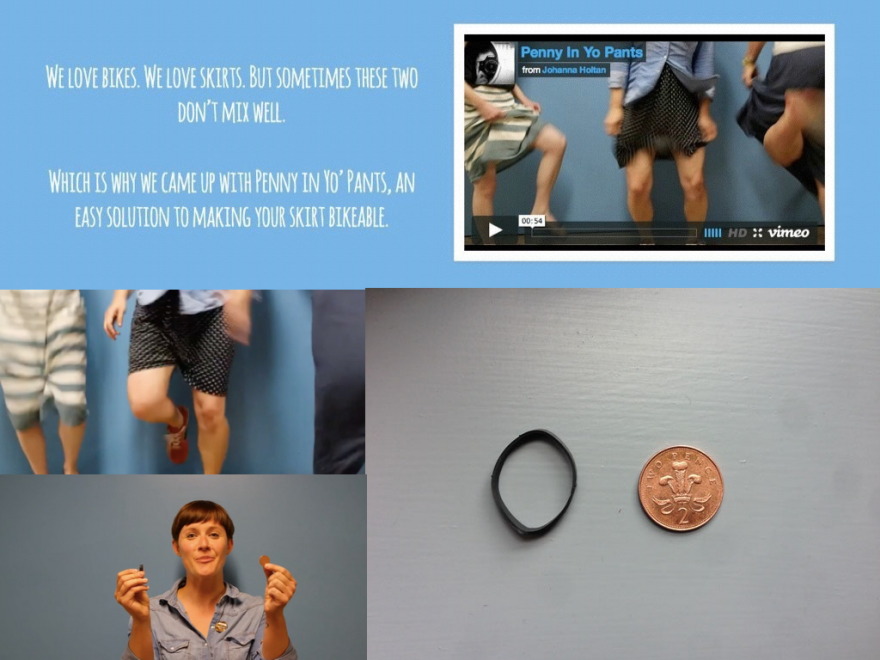 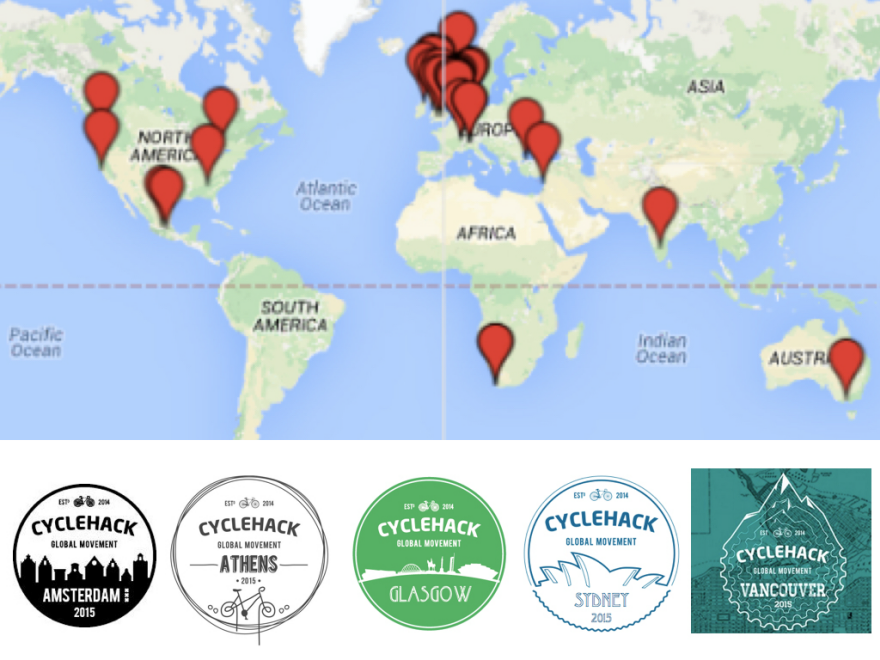 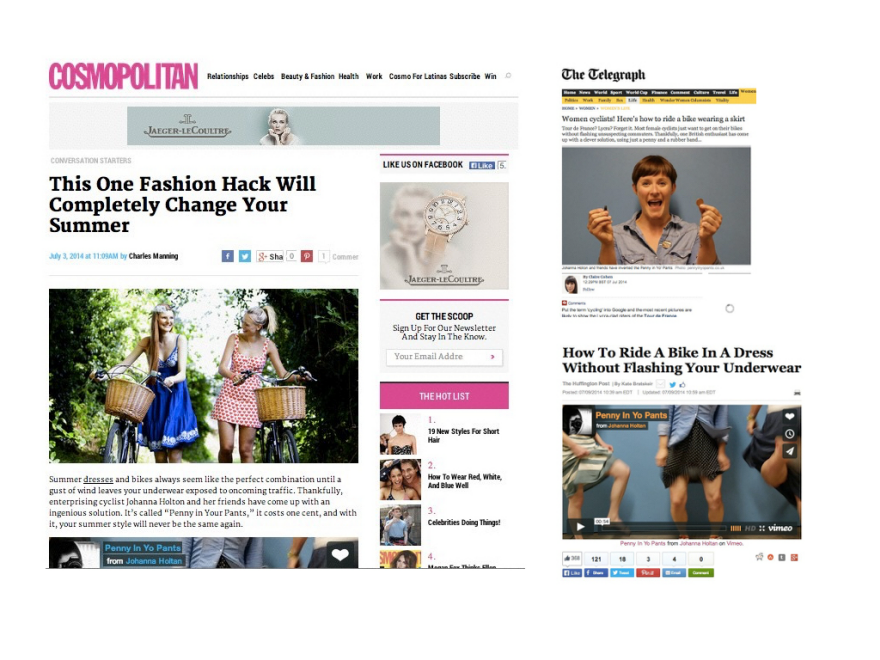 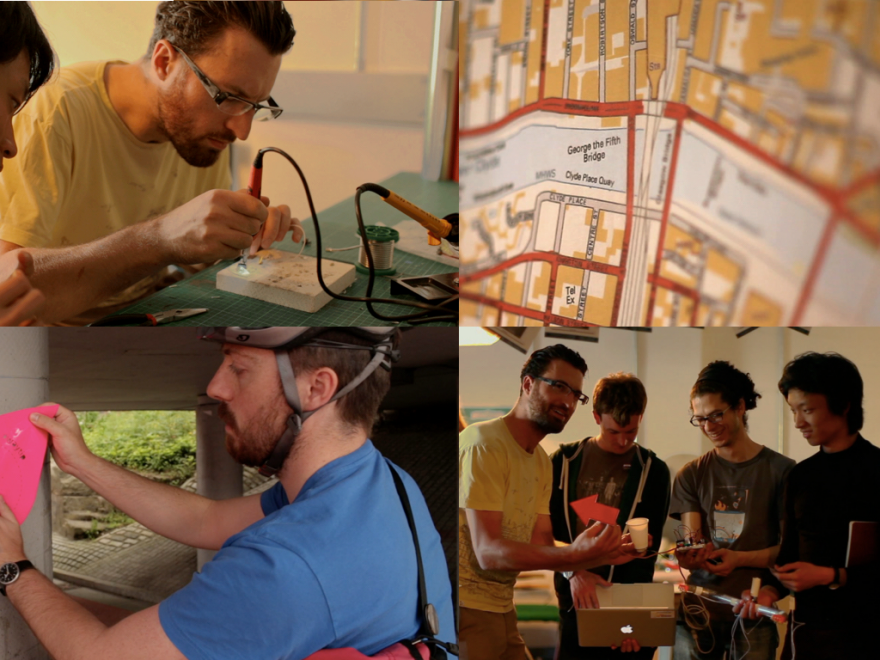 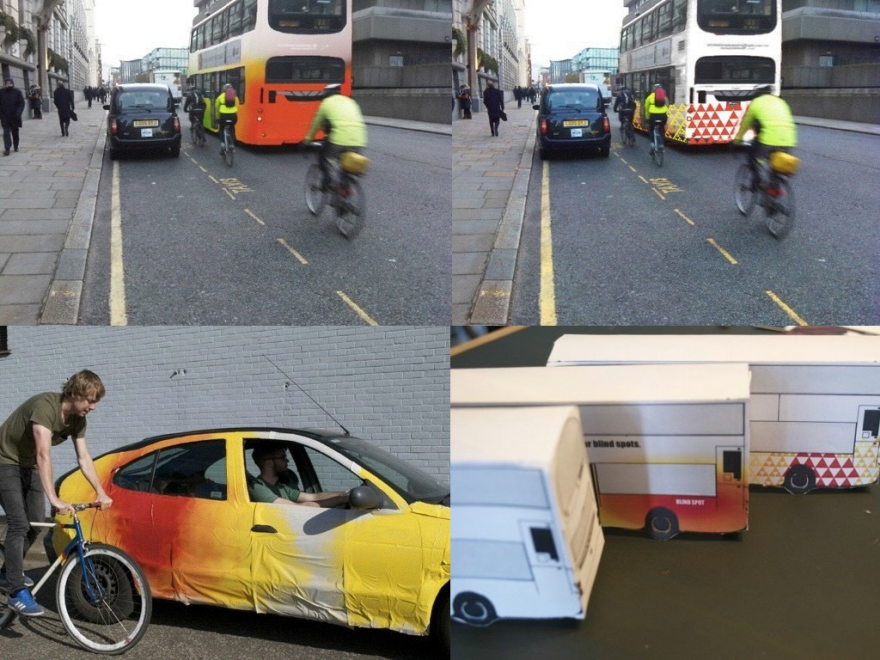 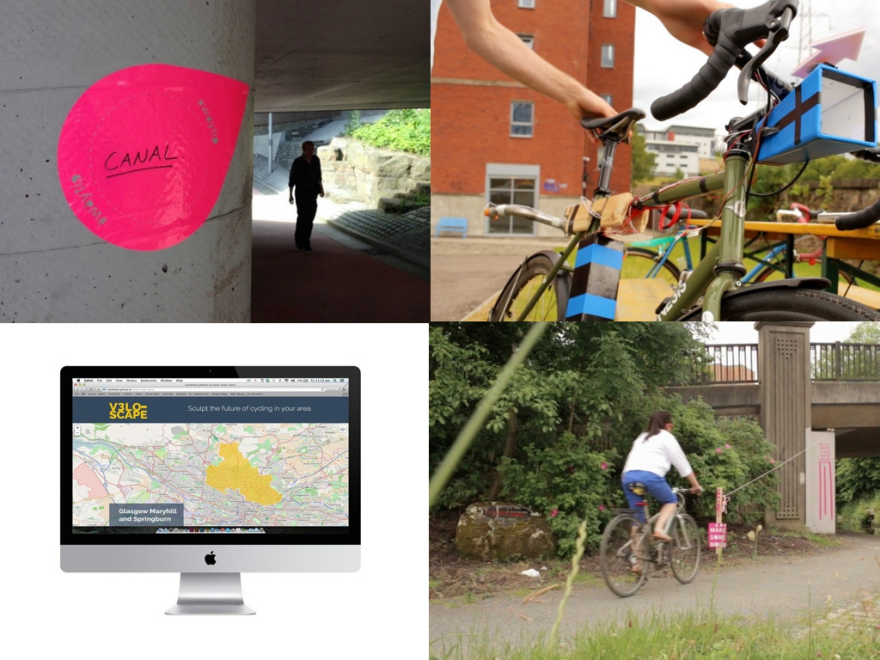 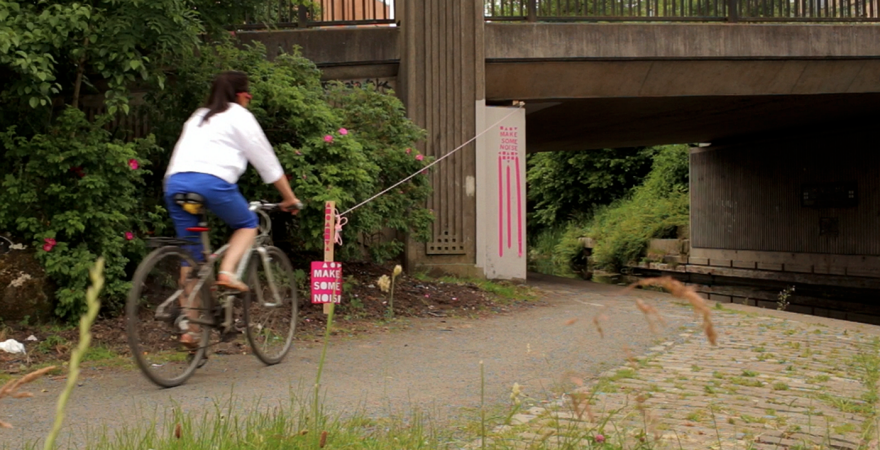 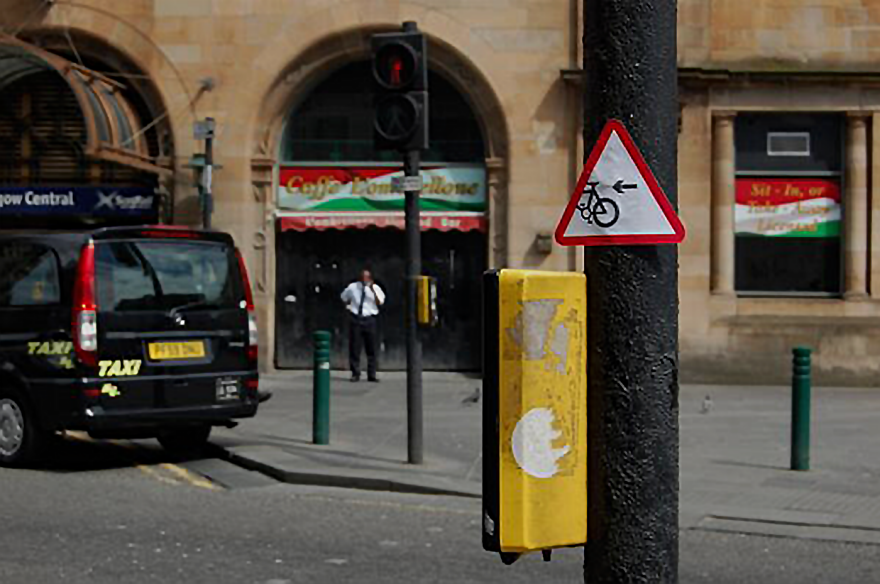 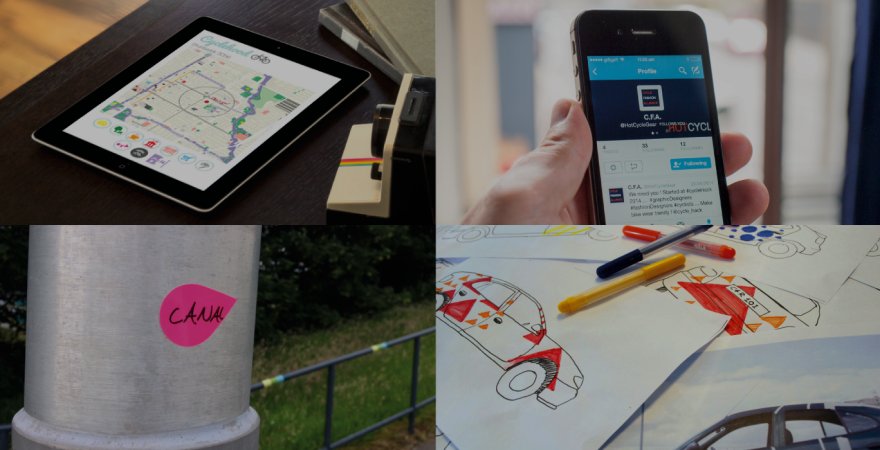 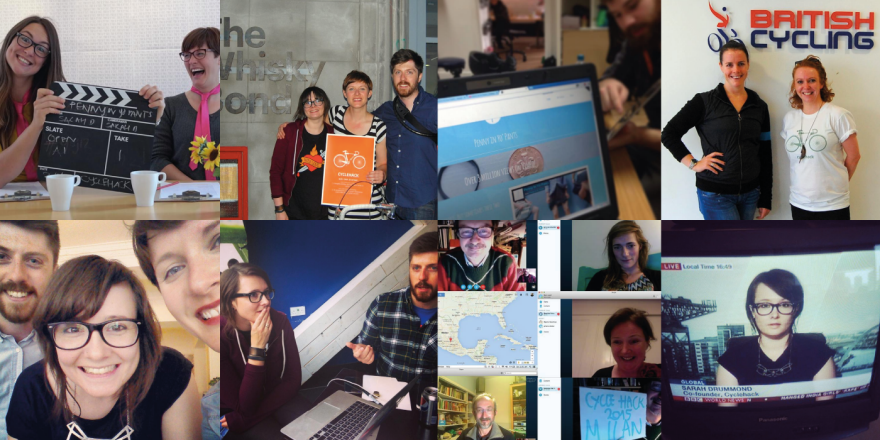 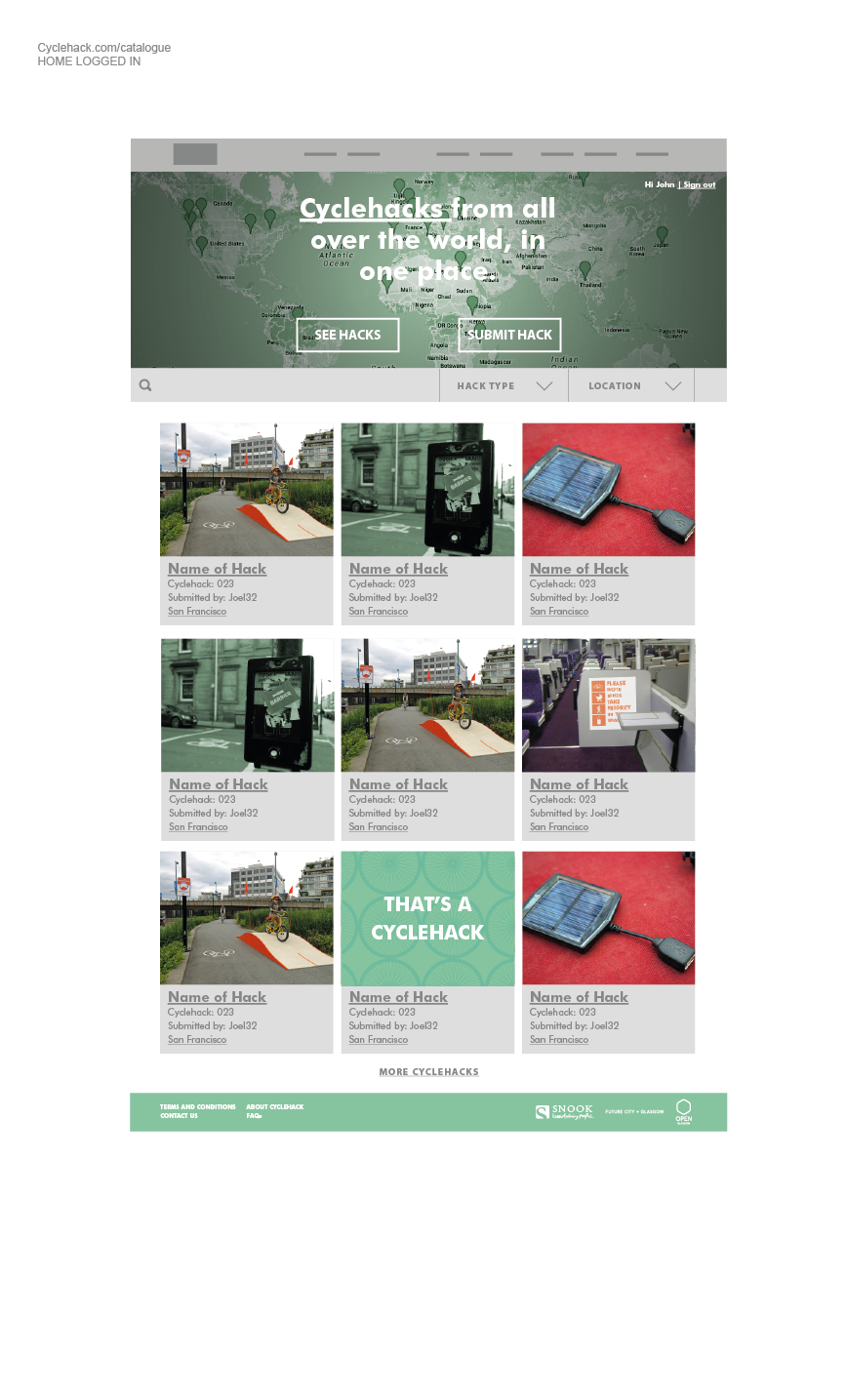 CycleHack was set up as an open design project to have meaningful social impact in the world. Our role as a design team has been to create an open framework, series of tools and branded community to support people to become civic activists on two wheels.

What we intended with CycleHack was to open up the design process and create an environment for people to feel comfortable to share their knowledge, take a problem solving and design approach to innovating the cycling experience and feel at ease to pick up design tools and make their ideas a reality.

To do this, we designed a variety of assets from the global event and agenda, brand and media to our open source catalogue and post global event, a hack pack for the next CycleHack locations to learn from. We did this all within 2014 and although continuing to grow in 2015, managed this with a show string budget of £12000.

Cyclehack ran a successful global event in June 2014. Over 100 people attended the Glasgow event and a core 50 members of the public engaged over the weekend, developing solutions to cycling barriers. The design team produced key networks with two other cities, running the Cyclehack weekend in Beirut and Melbourne at the same time. The team designed and produced an open source Cyclehack catalogue for the event which was utilised by Cyclehackers to upload their solutions and prototypes to at the end of the weekend. All the 31 products/services can be seen at Cyclehack.com/catalogue

The Cyclehack 48 hour event is the designed artefact, the team developed facilitation tools, an agenda, method cards, design of space, brand, website and created their own Cyclehacks. The design team covered all of this including the development of a brand from the ground up. Included in the deliverables were several films of Glasgow cyclists filmed as video interviews and from the perspective of their cycle journeys using Go Pros attached to helmets. In addition to this, the Cyclehack.com website collected barriers and Cyclehack ideas before the main event to use as stimulus in the Cyclehack. Cyclehacks included, new signage around the city to warn pedestrians of bikes turning corners which were implemented over the weekend, Penny in your Pants a life hack to help woman cycle in skirts that went viral gaining over 3.5 million video hits, a messenger bag strap for handbags, a series of service principles for cycling marketing, Veloscape - a data collection website to hold local authorities to account on their cycling spend, a GPS connected arrow for bike handle bars that shows you what direction the bike needs to turn in, a new website Cycle Stories collecting visuals of cyclists and their story of how they first got onto a bike to name just a few of the final outputs.

Cyclehack started as a coffee conversation, it is now a Global movement with it's headquarters in Glasgow. Cyclehack, before the core event achieved a successful Kickstarter campaign, raising £5000 through the sale of designed limited edition Cyclehack products, including a screen-print, water bottles, t-shirts, stickers and bicycle seat covers. Cyclehack has been featured in STV, Treadlie, Road CC, Wheel Woman, Good to name a few and Penny in Your Pants has reached an even further demographic in the press (see below). Most recently, Cyclehack founder Sarah Drummond was contacted by BBC World and featured on a segment to discuss Cyclehacking which was aired to over 360 million people worldwide from Glasgow. The most successful output was Penny in your pants, a simple video produced during the event that gained over 3.5 million hits and continued to further the Cyclehack brand by every tweet of the video containing the #cyclehack hashtag. The video was featured in Slate.com, Huffinton Post (France, UK, U.S.A and German editions), Cosmopolitan magazine and 9gag.com. This quantity of hits isn't just the only success, the video started a campaign of woman sending their videos on instagram of their Penny in your pants hacks and highlighting that cycling isn't just about lycra but can be feminine too. Cyclehack announced it's open call out to cities around the world to take part in 2015's event. It's current signup to date is 50 cities taking place in Seattle, Mexico City, Cape Town, Berlin, Bremen, Amman, Chile, San Francisco, London, Edinburgh, Dundee, Paris to name a few. This is growing on a weekly basis and shows the impact Cyclehack is having on a global scale. There has been no marketing budget for this element of work. The reach of our social media presence on a weekly basis of #cyclehack is 55,000 impressions and the Facebook has reached 600 likes since it was launched.

In addition our evaluation of the event highlighted a few successful statistics:

• One third of participants are taking their ideas further (29%) even though this wasn't the core intention of the Cyclehack.

• Cyclehack was rated 7/10 for having an impact on reducing barriers to cycling, as a first event that had never been run before we are happy with this statistic and have positive feedback to improve the event.

• Most participants rated their involvement in the cycling world as 4/10, we deem their participation a success for Cyclehack for attending a full 48 hour event. • 63% of participants had their first hack experience.

• Across the board, participants listed that they had - made new friends, learned problem solving techniques, increased their professional network, improved their bike knowledge, improved their communication and pitching expertise and learned how to sketch/visually communicate.

• 50% of participants said Cyclehack had encouraged them to cycle more.

Outputs have included a 12-minute documentary film which was premiered at The Whisky Bond Summer Party. In addition to the documentary, a printed catalogue was created through Newspaper club and shipped to key stakeholders in the transport and cycling industry.

// Been invited to premier the documentary at Seattle Bike Film Festival

// Present at Bike Velo in Paris

"Future Cities Glasgow is a Technology Strategy Board funded project that looks to demonstrate how technology can make life in the city smarter, safer and more sustainable. A key element of the project is Active Travel – cycling and walking – an area that can deliver enormous health, environmental and societal benefits. Cycling in Glasgow is on the increase, yet there are still an abundance of challenges that cyclists face. It is these challenges we wanted the cycling and design community in Glasgow to help us tackle, taking an approach that puts them at the heart of this. We are Snook had been working with the Future City team on a number of projects, and approached me about the potential of funding Cyclehack. The concept fitted well with the programmes needs, as did the innovative and creative approach. From the outset the project was inspirational, and challenged us to look afresh at how the public sector can work with communities. The design process that shaped the whole project created an environment that removed barriers, that gave a platform for people to talk openly about what challenges they face, and to recognise the importance of creativity in reshaping the city. Over the weekend it felt like I was witnessing a new form of activism, one that is not merely confrontational and critical, but at its heart collaborative and inclusive. The overriding feeling was that in order to drive change in the city, we all should be part of the solution, and design is key to that. Cyclehack recognised the place that all road users have, car users, buses, pedestrians as well as cyclists, and developed concepts that can help tackle the conflicts between the groups. It allowed people from all kinds of backgrounds to share their skills and ideas. And for people to see their ideas come into reality.

Urban prototyping was new to me, and as someone how lives, works and plays in the city, opened my eyes to the impact an agile design process can have. Concepts were designed, prototypes made, and then trialled in the city all over the weekend. Glasgow became a testbed for ideas over that weekend in June. Some were obviously more successful than others, but the opportunity for designs to be rapidly trialled in situ, then iterated on, meant that the designs were constantly being developed. From cars spray painted as a safety heat map, wayfinders on street lights, warning signs for pedestrians, and a whole bike hacked with sensors, the variety of design was amazing. Cyclehack showed how design can shape how people experience where they live, how it can create new communities that can collaborate and how it can empower them to make their city a better place. It more than delivered what we asked for, and hoped for. It will be part of this city, and of others, for a long time to come."

Brings people together in their city to generate practical solutions to the barriers that otherwise stop or inhibit people from cycling. It gives citizens the tools to propose their own proactive, DIY, solutions.