Eripio has been designed to aid: fresh water supplies, medical assistance and evacuation of casualties during natural disaster rescue operations. The three main types of these natural disasters are: Earthquakes, Tropical Storms and Floods, thus the vehicle has been engineered to deal with these situations.

The research conducted into these types of disasters has shown a need for a new type of rescue vehicle to be used in the Asian region as the majority of natural disasters occur in this area. The vehicle will meet the problem of increasing strength and occurrences of these disasters.

Eripio means rescue in Latin. The Rescue Vehicle is amphibious; it is fully adapted for travelling on water as easily as it travels on land. The vehicle uses a high powered water jet system which propels the vehicle through the water. This gives the vehicle more manoeuvrability than standard propellers.

Rescues from flooded areas are made easier and quicker with this vehicle. Rescuers can save people in water and transport them to a medical centre in the same vehicle.

The aim of this project was to design a vehicle that will aid in rescue at a natural disaster site. The vehicle will be a first response/first in vehicle and thus would provide initial medical supplies, first aid and fresh water to help relief efforts before air drops arrive. The vehicle must be able to provide a basic operation room to treat casualties on site. The operating table, chair and equipment needs to be able to fold away and the interior wall slide to one end of the vehicle. This is for when the operating room is not in use, creating more space for casualties. The vehicle carries 6 casualties on stretchers or 20-30 non-critical casualties when the stretchers are folded away. There is also roof space when more capacity is required.

Research into nature disasters has highlighted the three main types: Tropical storms, earthquakes and flood. In addition to this, the major locations where these are most damaging are in the North American region and the Asian continent. As there is a higher population in Asia, the vehicle will operate in this particular area. This vehicle will be owned and operated by Aid groups that operate in the area hitherto mentioned.

There are numerous rescue vehicles in use today. The most widely used are not designed originally for rescue and they have no amphibious capabilities. These vehicles can have problems when roadways are damaged or unusable for these types of vehicles. 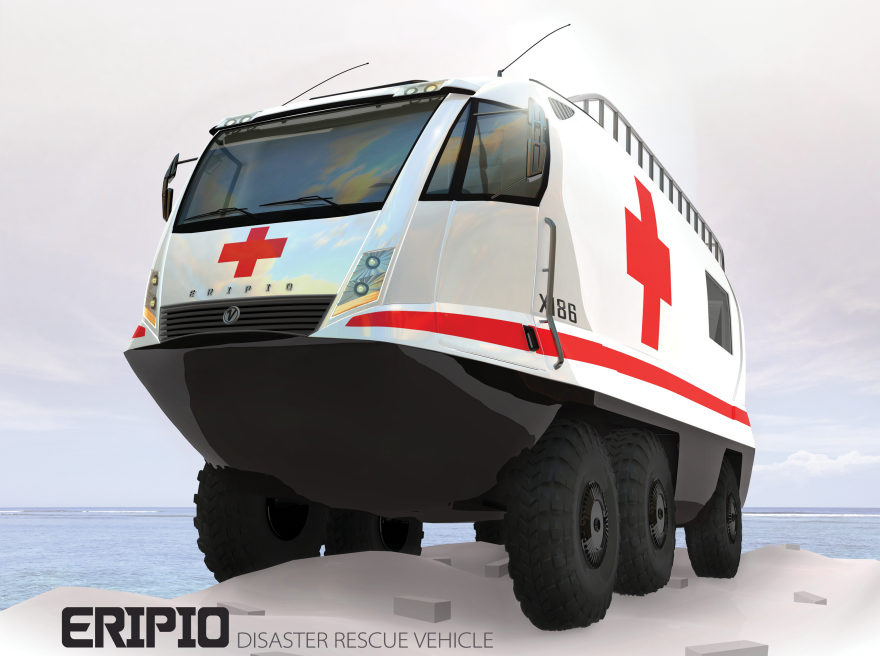 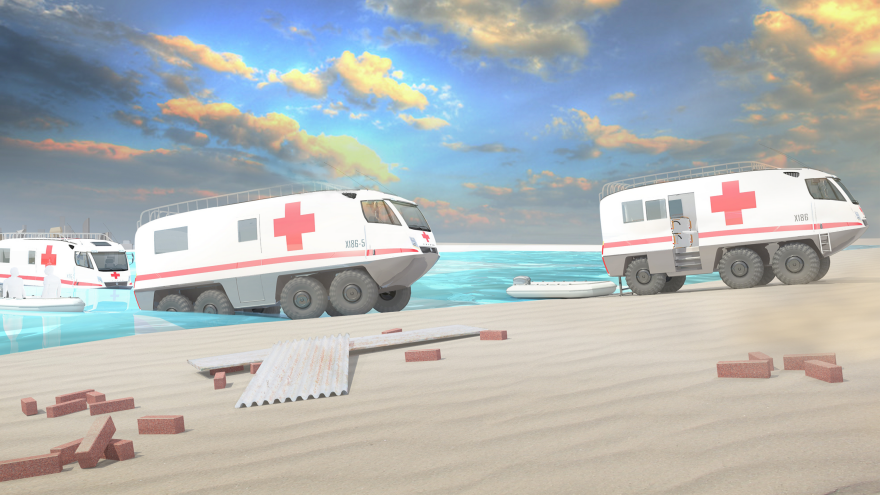 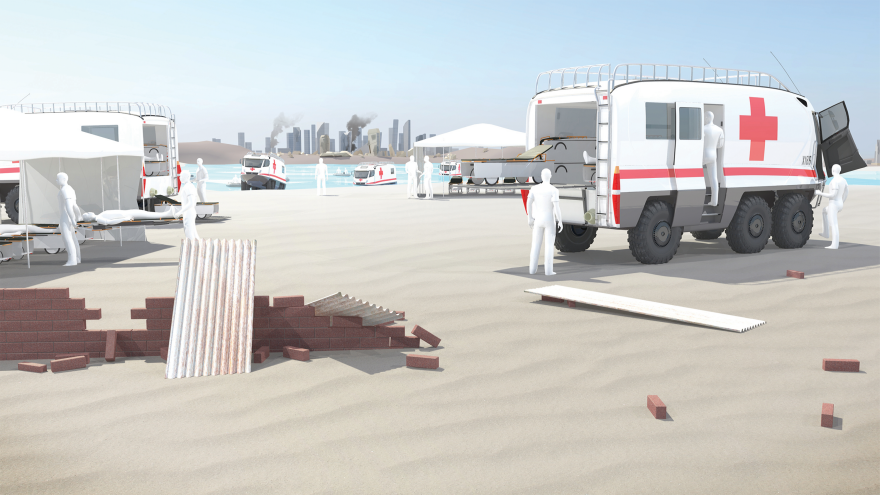 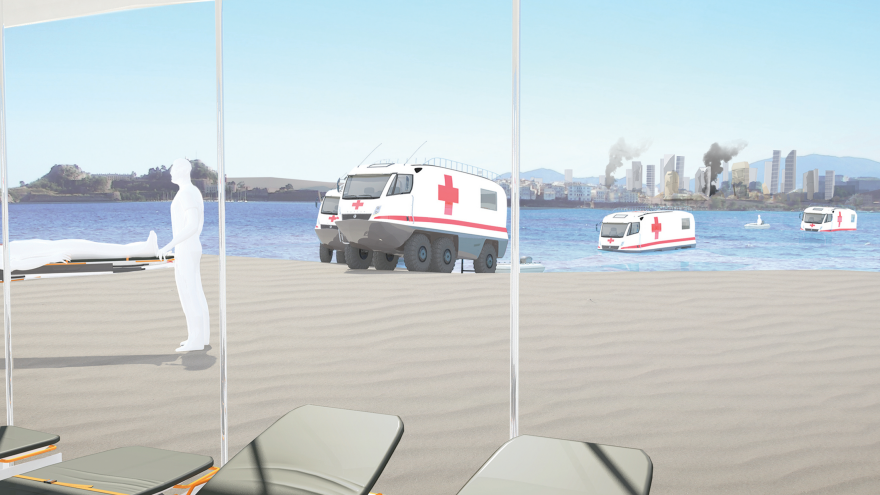 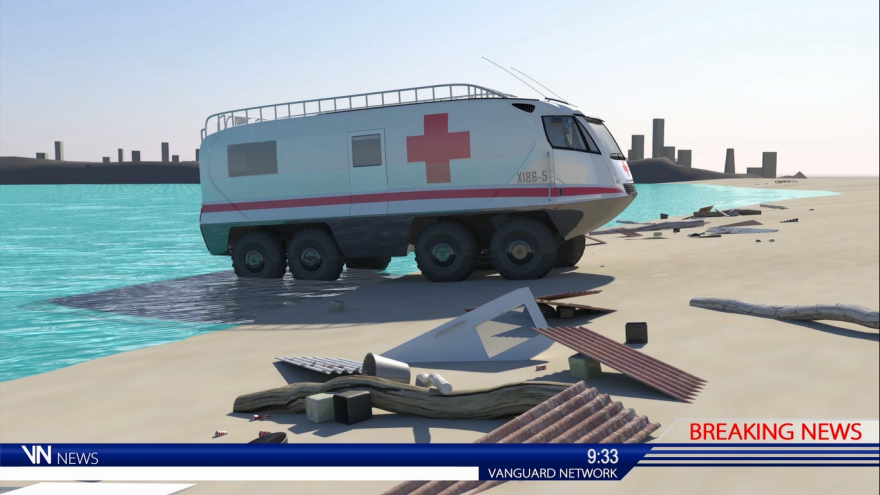 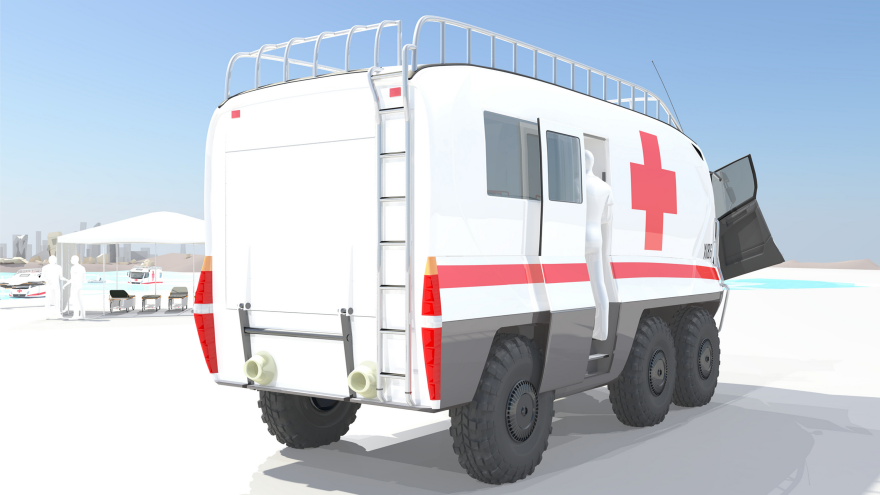 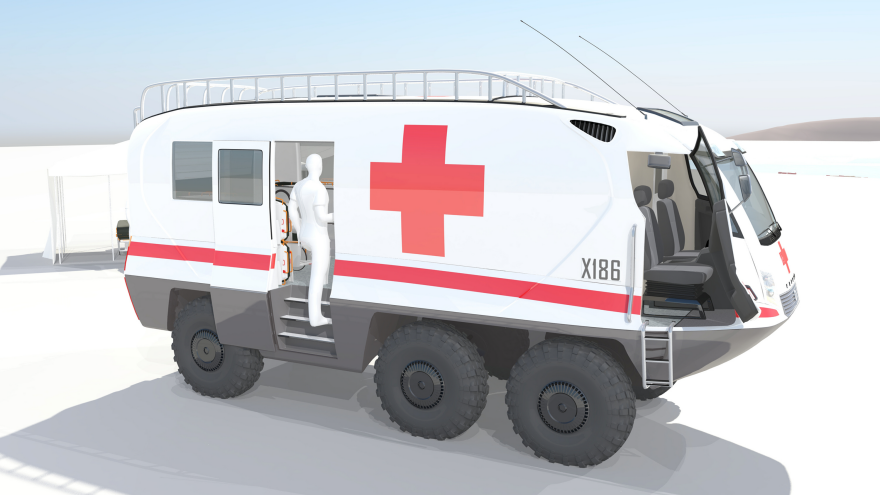 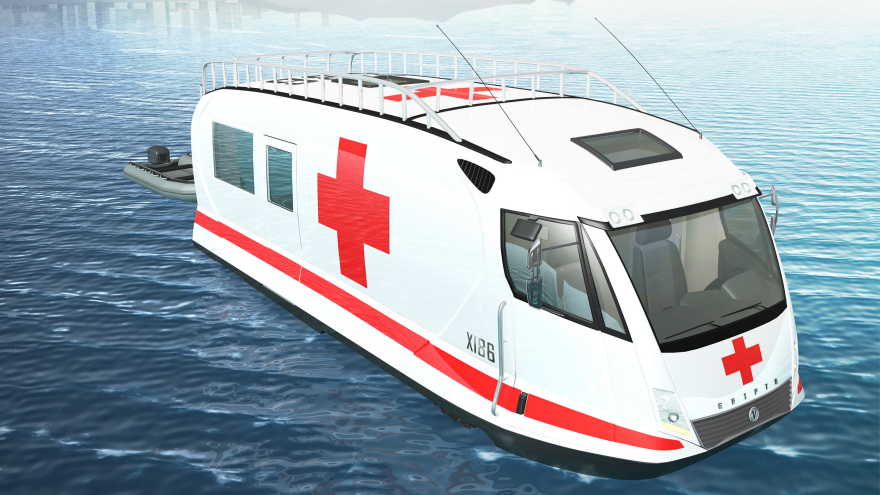 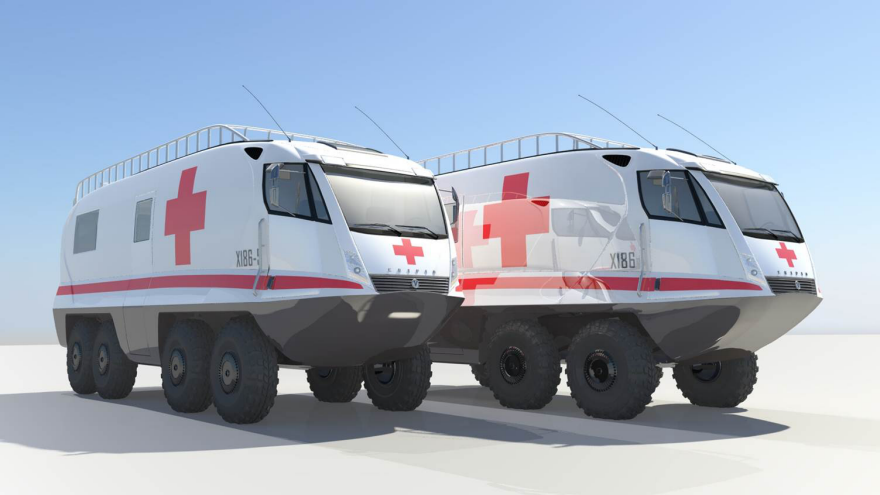 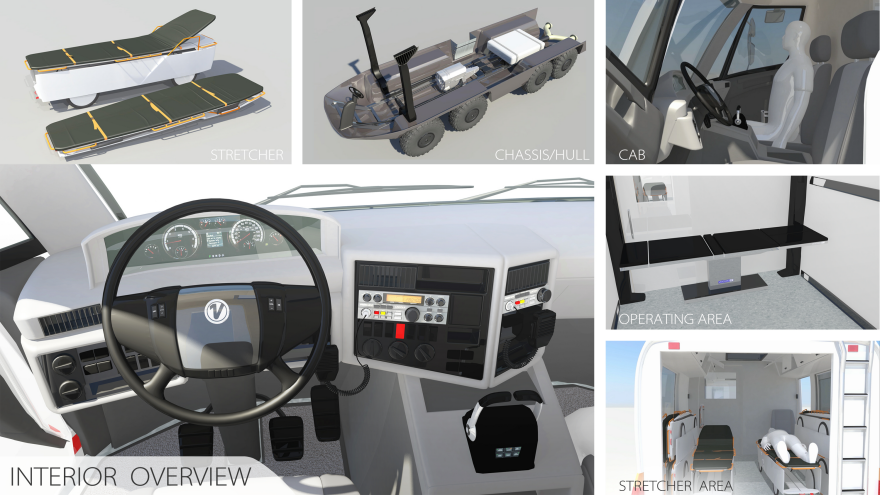 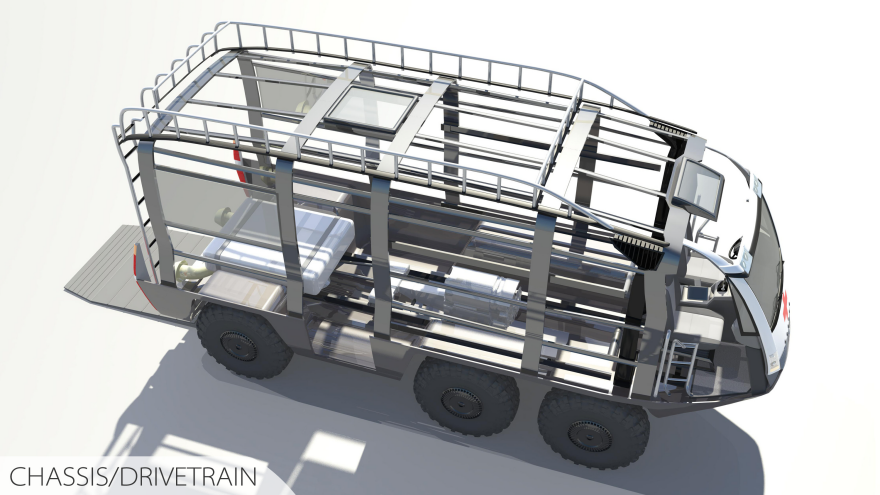 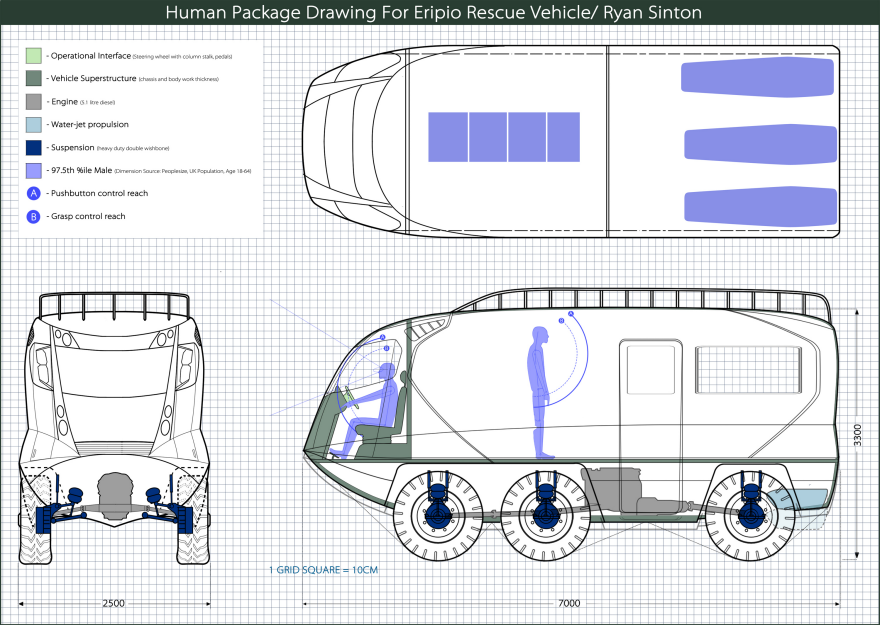 The vehicle has to be affordable for aid organizations and countries; it needs to be efficient and relatively simple to operate with low maintenance. The vehicle is able to rescue people from flood water without the need of rescue craft. This saves valuable time which can mean the difference between life and death. Communication is also vital. There are problems with communication today which causes delays in the aid operation.

• Prepared to deal with a variety of scenarios

With the increase of natural disasters as a result of climate change, today’s existing rescue vehicles will not be able to handle the amplified demand and the extreme conditions of these situations. As a consequence, they cannot cope with the increased number of victims.

‘Nature disasters account for the biggest majority of disasters in the world. The three main types of (natural disasters) that cause the largest economic damage: earthquakes, tropical cyclones and general floods.’ (Kron et al., 2012: pp. 544–545).

This vehicle’s appearance is not a huge element as the functionality is the main focus. The main appearance derives from function: the shape of the hull, the front cab section and the rear passenger section are designed to have an optimised drag coefficient within water.

Although the vehicle’s function is important, it also needs to look like it can provide support and appear strong enough to deal with rough terrain. Some style has been added to give it a unique character, however, the majority of the appearance uses rounded edges to create better performance in water and this design element has been continued throughout.

The research conducted demonstrated a need for an improved rescue vehicle; one which can overcome the problems faced by existing vehicles. However, as this is not a fully proven design and no users/aid organizations have accessed and given their approval of the functionality and usefulness of the vehicle, consequently the credibility of the vehicle is not proven.

The design is oriented round rescue victims, so a lot of consideration has been placed in this area. The rear door is hydraulic and lowers fully flat to the ground. Stretchers can be brought up with ease on this door/elevator. While in water this door can be used as a platform for rescuing people from the water. The side door reaches almost to the floor of the vehicle. The door opens to reveal steps into the vehicle. The driver and passenger doors are provided with a foot step and a rail to assist the user in entering and exiting. These doors do not reach down to the vehicle’s base. This is to prevent water from entering the cab and prohibiting safe use of the vehicle.

Equipment and supplies will be arranged in order of priority; the way ambulance equipment is arranged. The equipment will mostly be stored in overhead lockers with some storage space at ground level.

The engine provides power to all six wheels (all eight Wheels-for larger version). When in water the engine will drive the water jet unit.

5.1 Litre diesel engine (7.7 Litre diesel engine-for larger version). The engine comes in seven power ratings from 15 kW (156 hp) to 220 kW (299 hp). It has been designed to improve fuel efficiency. The engine also has low noise, low emissions and has 5% more fuel savings than previous models to meet Euro VI standards. As this vehicle is intended for water a marine conversion or the marine equivalent will be required.

The engine will be situated centrally and as low as possible on the chassis to maximize stability and the performance of the vehicle when in water. The power will be distributed to the two forward axles and the real axle evenly.

The engine cooling will be provided by a snorkel on either side. The main grill will be used primarily as a water vent. When in water the bow wave enters this vent, it will pass through a sealed section between the hull and the engine. This vent then leads directly into the water jet unit situated at the rear of the vehicle.

Heavy duty double wishbone suspension will be used. This type of suspension is often used on off-road vehicles for its ability to keep the tyres glued to the ground in spite of the uneven surface. The suspension element will be provided by two side action telescopic shock absorbers attached to all the upper control arms and a torsion bar on all the lower control arms. Air ride suspension will also be integrated with the main suspension units to provide the vehicle with adjustable ride height, allowing the vehicle to lower (when stationary) for easier access. The suspension is attached to the outer hull to minimize the number of openings in the hull. This reduces the amount of sealing points needed to maintain water tightness. The hull is a steel construction which is integrated with the chassis so it will be strong enough to support the vehicle and suspension mounts. This suspension type is commonly used on military amphibious vehicles.

The unit is installed in the transom of the vehicle. The water-jet draws water from beneath the vehicle through a hydrodynamic intake screen and into the pump unit. Inside the unit, the impeller accelerates the water which then creates a powerful jet-stream. The stream then gets split and forced out of two steering nozzles. The water-jet is equipped with hydraulics to control these nozzles for steering and reverse functions. The water-jet and hydraulics are driven by the engine mentioned above.

The chassis is combined with the hull to utilise the strength of both components. The steel thickness of the hull will be (7.4mm) on the sides and (20mm) reinforcement at the bow and bottom of the keel. The chassis has two longitudinal steel channels with six cross-members combining the two main halves together. Torsional stiffness for the chassis is irrelevant as it is mounted inside the hull which is rigid. The body sub-frame is mounted to the chassis and the hull so mounting points will need to added to both components.

There are three prop shafts; for the front axles, the rear axle and the water-jet unit. The engine is central for balance. The power is sent back into the distribution unit which then divides the power evenly. A gearing system in this unit allows the power to be sent forward.

There are three axle; two at the front and one at the rear. Having two at the front gives more stability and ground clearance when entering/exiting water. The front two axle’s wheels are steerable. This stops the middle axle’s wheels from being unnecessarily worn when turning. The vehicle will have variable drive. This will allow the vehicle to distribute power to the wheels were most needed, giving it better traction and manoeuvrability.

Each axle has rubber and steel flanges which will form a waterproof seal over the opening points in the hull. These flanges need to be greased to keep dust and water out.

The interior cab has been designed to be practical and functional. The switches on the dashboard are easily accessible to the driver while not impeding far into the space of the cab. The communication radio can be used from the driver’s or passenger seats.

The operating room (situated centrally) can be used for emergency operations when it maybe too critical or not enough time to transport a casualty to a medical facility. The operating room’s interior wall moves when the room is not used. This maximizes the space for the stretcher area at the rear.

6.2 How the vehicle stays afloat while in water

Height-2.2ft (height up to the waterline)

This is only an estimate. Different factors can change the final outcome such as the weight of the water. Sea water is heavier than fresh water.

A lot of thought went into this, as well as on the inside, thought to the space planning.

It’s a pretty big undertaking for a vehicle of this size and scope for a student project...Really exciting to see.