People have designed so many clocks, but haven't updated the way we measure time. Time is a manmade concept to quantify transformations. Being involved in the fast pace society, we are formed to scale time through clocks that circles around. While complaining about the short 24 hours given to us each day, we neglect the charm of changes.

Trace is a timepiece (wallclock) that redefines our perspective toward time measurements. It is designed to help users regulate their lifestyle so as their sleeping cycles by nature. Trace is formed with a linear light bar running infinitive on a circular 'clock face'. The special coded color adds up hourly referring to the gradient of the sky. Color changing suggests users each stage of the day. The design redesigns the way we measure time, raises our awareness of time passage and celebrates our appreciation to the linearity, infinity, and beauty of changes. 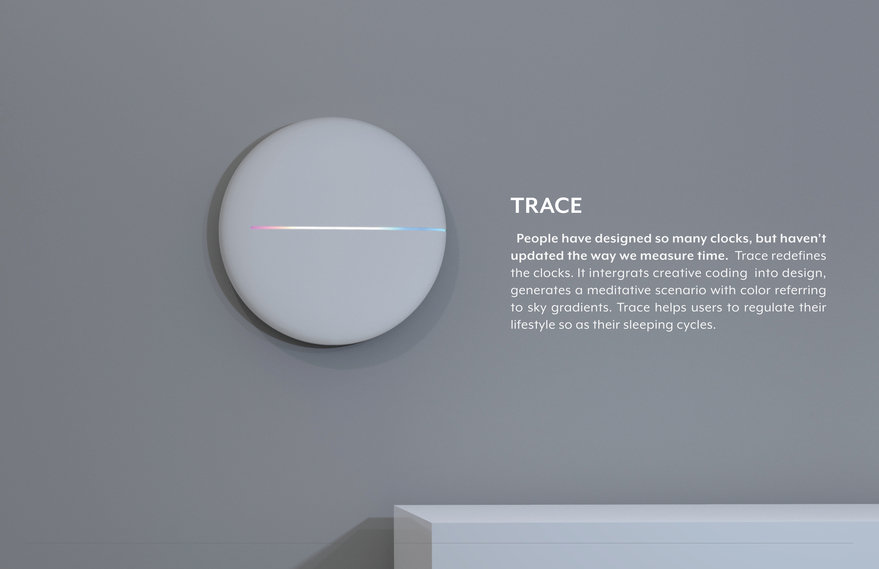 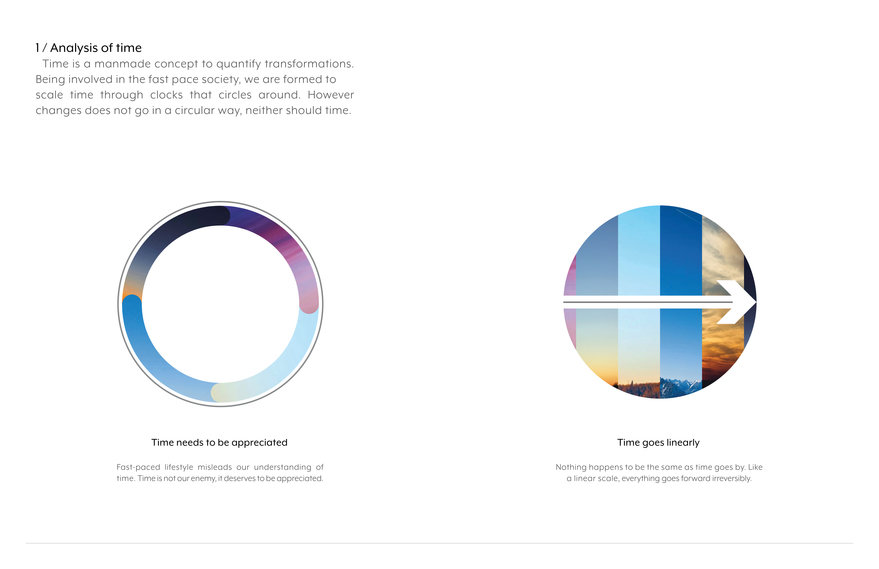 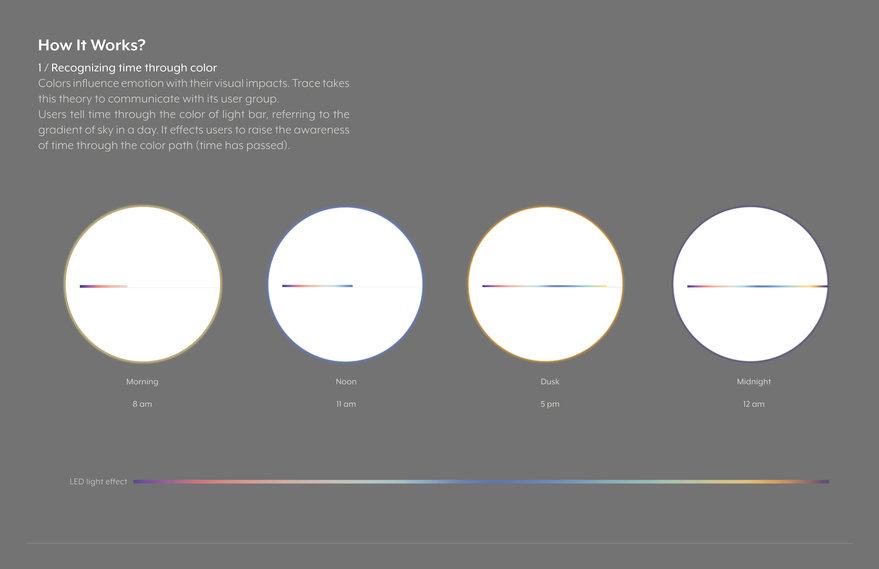 Trace/ How It Works 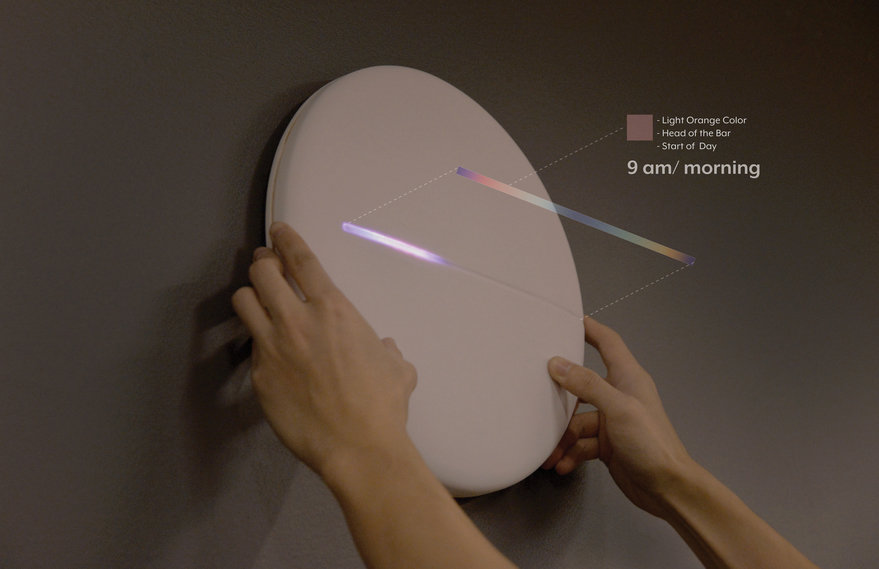 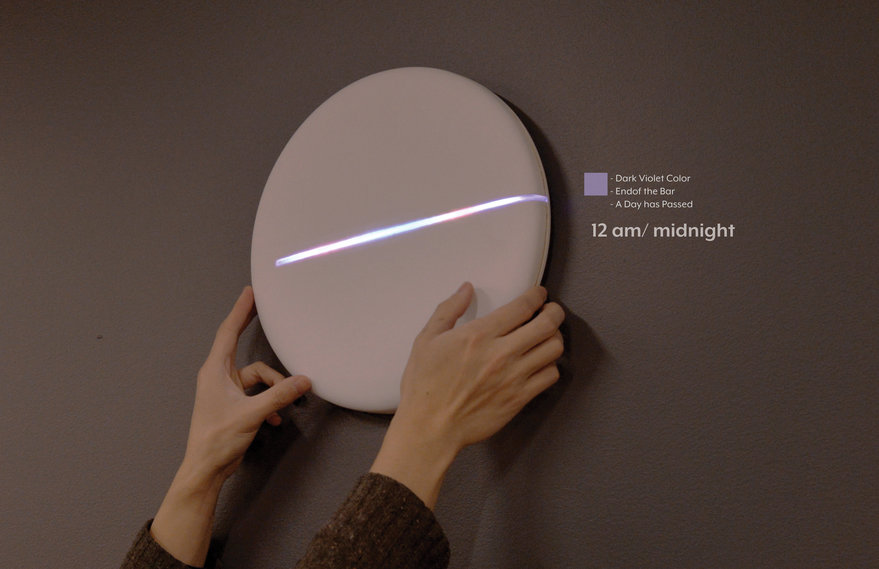 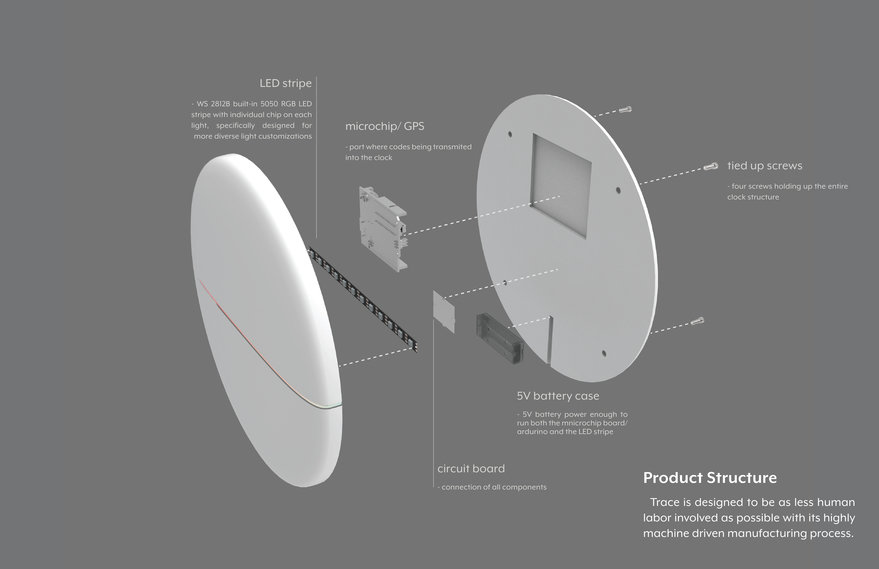 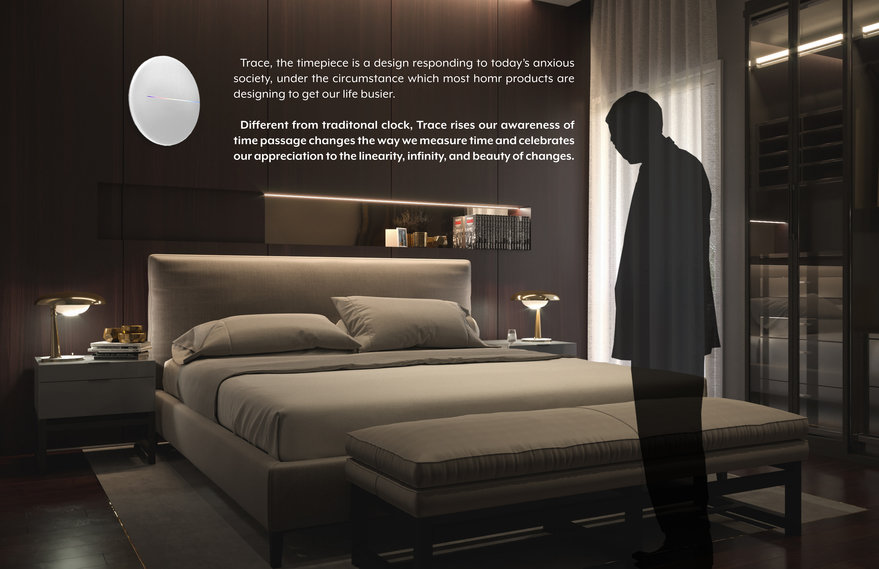 Trace breaks through the boundary of home clocks, which is the most commonly accepted device to measure time changes. Trace dated back to the day, before clocks were invented, when we were still observing the position of the sun to determine stages of the day. The functionality of Trace, not only tells time but also emphasizes the nature behind it. In this case, the irreversible feature of changes.

As science data proof on how much natural color would affect our emotion, Trace has helped a lot of test users altering their anxious lifestyle. Trace understands our phycological needs. As most products in home and living industry nowadays heavily focus on increasing our life efficiency through the cutting edge technologies, those products often cause a more anxious living behavior. However, Trace takes the opposite approach. It is designed to be a meditational piece that provides users a better life. No matter how much pressure users met throughout the day, after taking a glance at Trace, colors gathered from nature will start curing their anxiety. While getting to know the moment of the day, users will also appreciate the beauty of time and moved by the charm of changes.

Trace is designed to involve as less human labor as possible with its highly machine driven manufacturing process. Two shells are both CNC machined and coded with matte white finishes. All electronic parts are machinery welled. The small number of components allows Trace to be easily assembled on the assembly line in a short amount of time. It is designed to be mass produced to lower the total cost while increasing the profitability of manufacture.

Trace is a design responding to today's anxious society, under the circumstances which most products are designing to raise efficiency. People treat time as their enemy. As we get more flippant and impetuous, Trace addresses the way to rescale how we look at the time. It brings simple, pure and meditative lifestyle to users in order to influence the society. It is an unprecedented example of incorporating technology into the design. At the same time, Trace is also an illusion of environment. It brings the sky gradient into users apartment, reminding them of the beauty of nature and how much we should respect the environment we are living in.