Children have to overcome many challenges while they're growing up and develop their personalities. Problems at school, making friends or even a lack of self-esteem. It can be tough to cope with all of this. Some kids even have to deal with separated parents. Being in the middle of them is a tall order. Having a meaningful conversation about their feelings and concerns can be hard as they often have a loyalty conflict. The desire to make it right for both parents puts a huge pressure on them. They are often reluctant to talk about their emotions as they neither want to take sides nor make either parent sad. This is a severe problem that is easily overlooked.

As of 2017, nearly half of all marriages in Denmark fail. In every fifth home with children there is only one parent.
At Maglegårdsskolen, which was a collaborator for this project, almost a third of the children live with divorced parents. They understand that it’s a serious topic and organize weekly sessions for the affected children where they are given the opportunity to talk about their feelings. Unfortunately, at home most of these children don't get to express themselves about what's on their minds.

Animo is a board game for children that facilitates conversation between them and their parents. It provides them with a confined and playful space that makes it easier to reflect on and talk about feelings and difficult topics. It does that without giving them the feeling of being judged.
It is a shared experience for families and school kids to make communicating their fears, their concerns but also their joy more seamless.
Over the various iterations of the project I opened it up so that it works for all children. Giving the affected children a platform to talk about their innermost feelings together with other children allows them to blend in better with them.

When I tested Animo with a school class some children mentioned that one of their class mates is mean to them. Playing the game with that child unexpectedly revealed that it was this child’s way of showing their discomfort about not being accepted because of a language barrier.
Following our collaboration, the Maglegårdsskolen asked me to produce the board game for them because they would like to add it to their toolset.
One of the separated parents reported that her son was tired and pensive after playing Animo but that he then opened up and has become even more confident in telling his parents how he feels about everything. They said that his assertiveness made them more aware and respectful of his needs.

As today’s children have to deal with complex social networks both in the digital and physical world, it is vital for parents to talk with their children about their feelings and understand them on a deep level.
I believe Animo deserves the exposure to create this awareness and to give parents and other caretakers a communication tool that lets them get to know the children better on an emotional level. 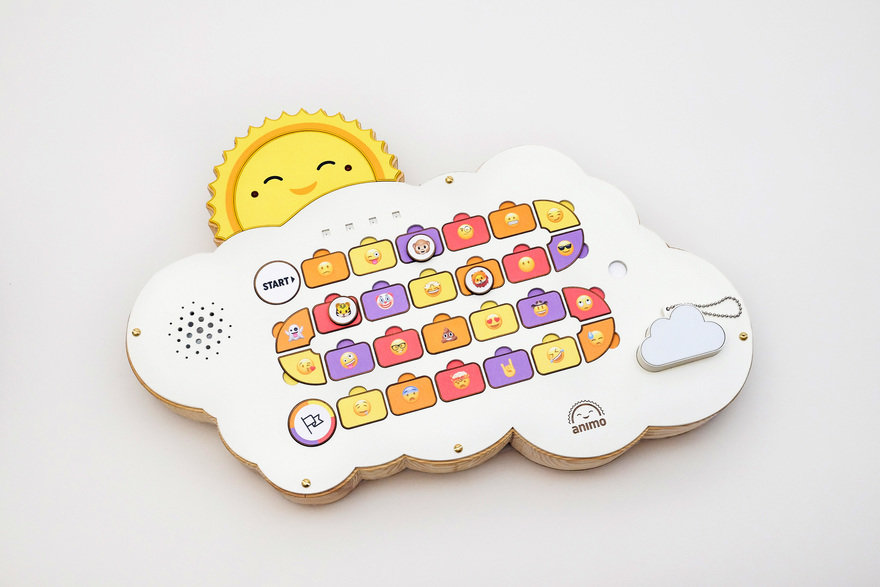 Final Prototype This is how the final version of board game prototype looked like. 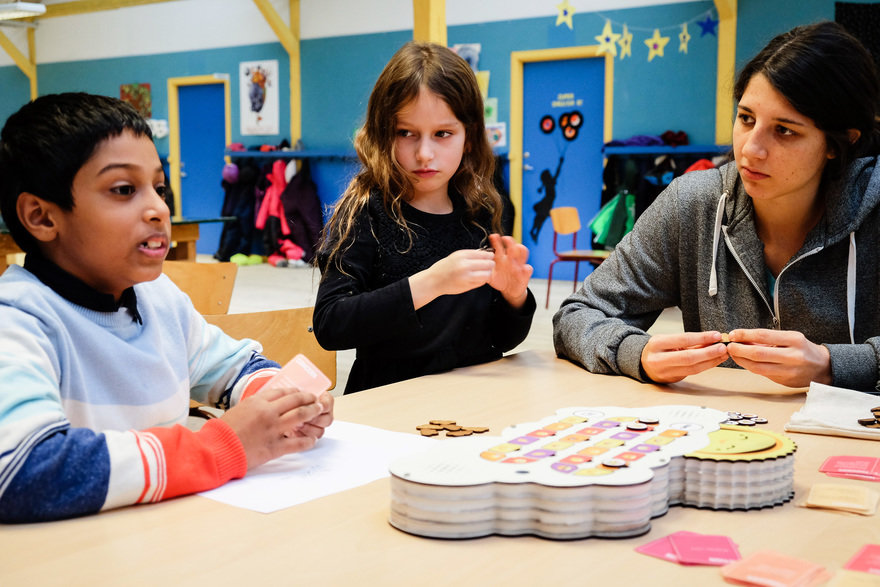 Test Session at School A snapshot of a full day test session with a whole school class. The goal was to figure out which parts of the prototype work to make the children talk about their feelings and feel comfortable doing so. 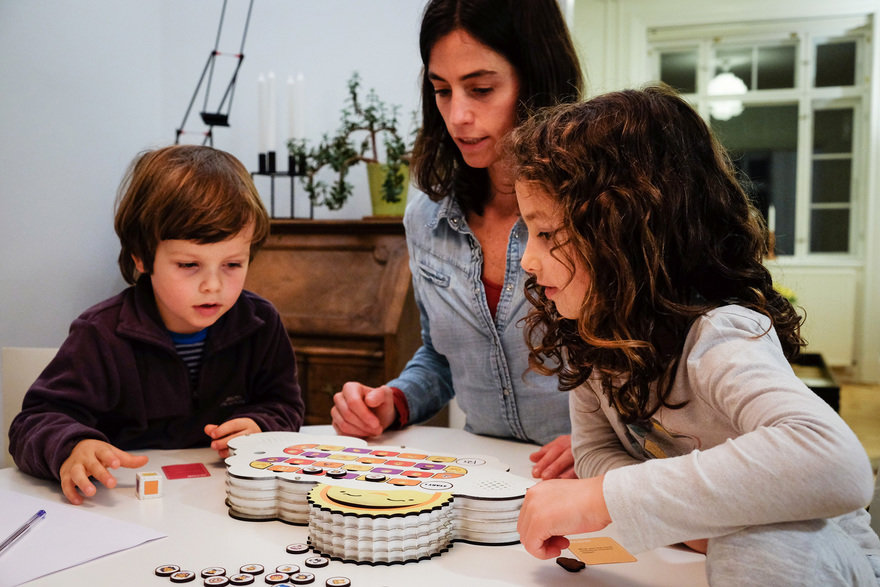 Test Session with Family A snapshot of a test session with a family in which the parents are together. In this session I tested how the game plays out in a context of a non-split family. 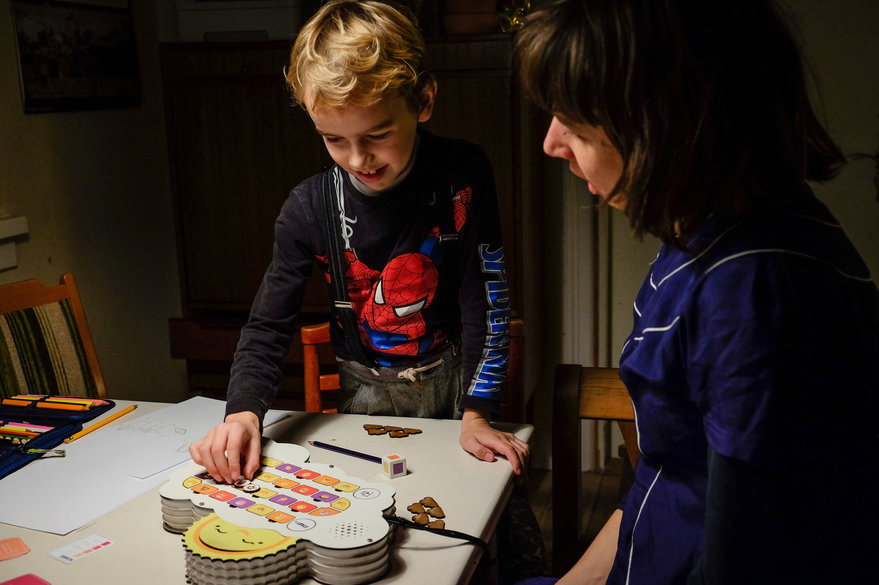 Test Session with Split Family A snapshot of a test session with a single mother and her son. 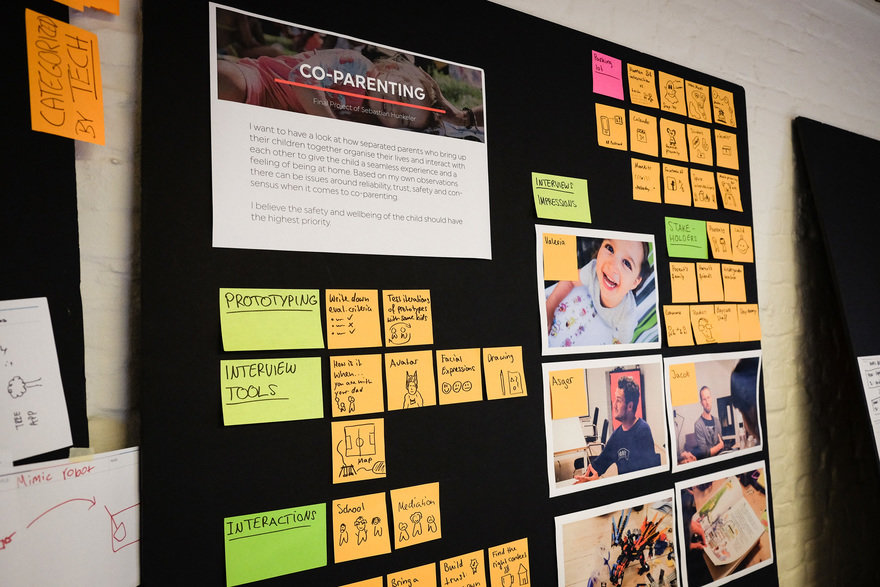 Research Artefacts The place where insights and ideas were collected during the research phase. 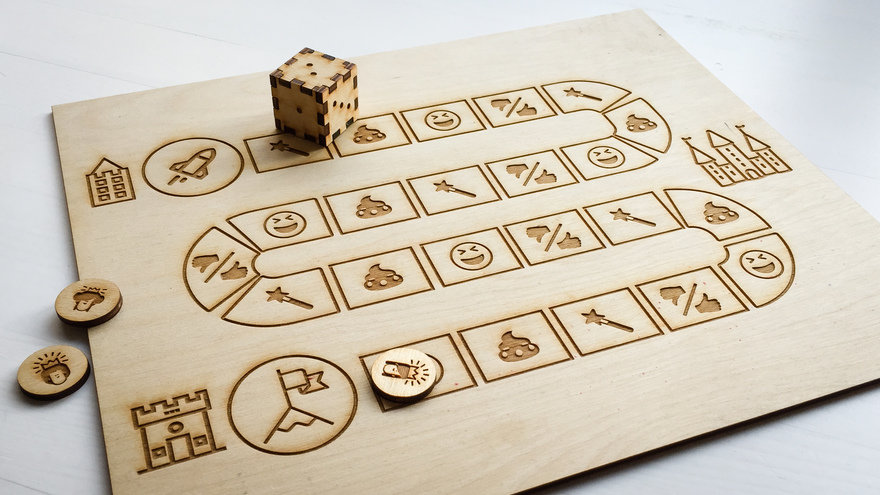 First Board Game Prototype After having decided to proceed with the concept of a board game, this was the first prototype of it. 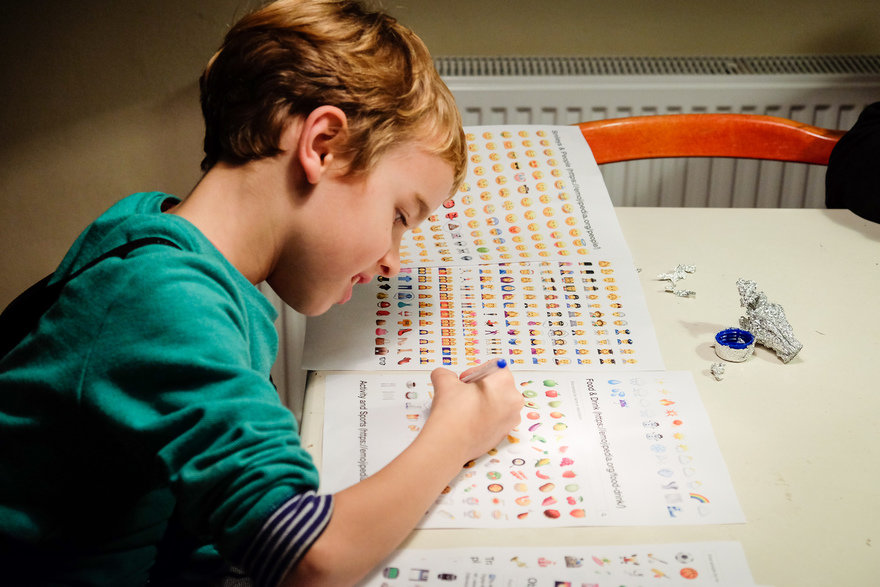 Co-creation Session The co-creation session with this boy from a split family helped me to define the visuals and the game logic. 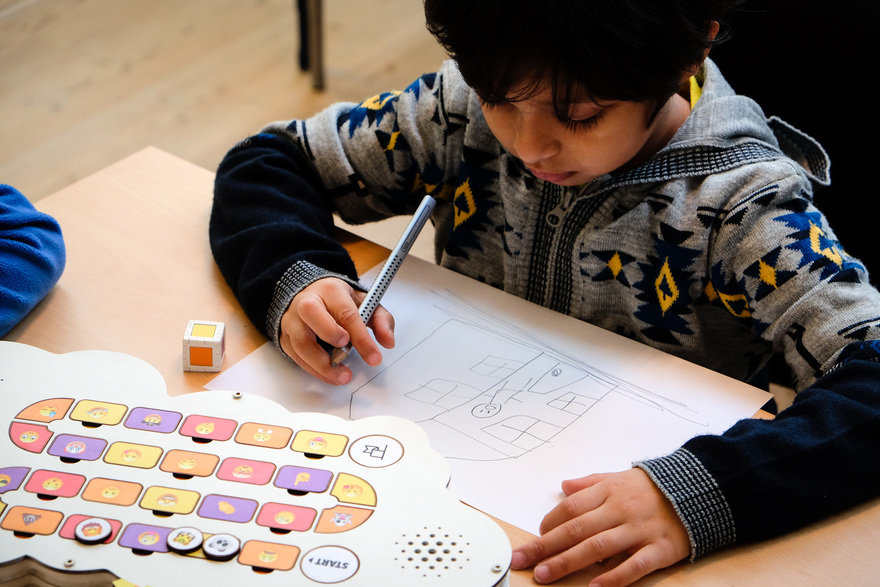 Game Logic Session In this test session I tried out whether the new elements of the game logic keep them engaged and make them reflect on their feelings. 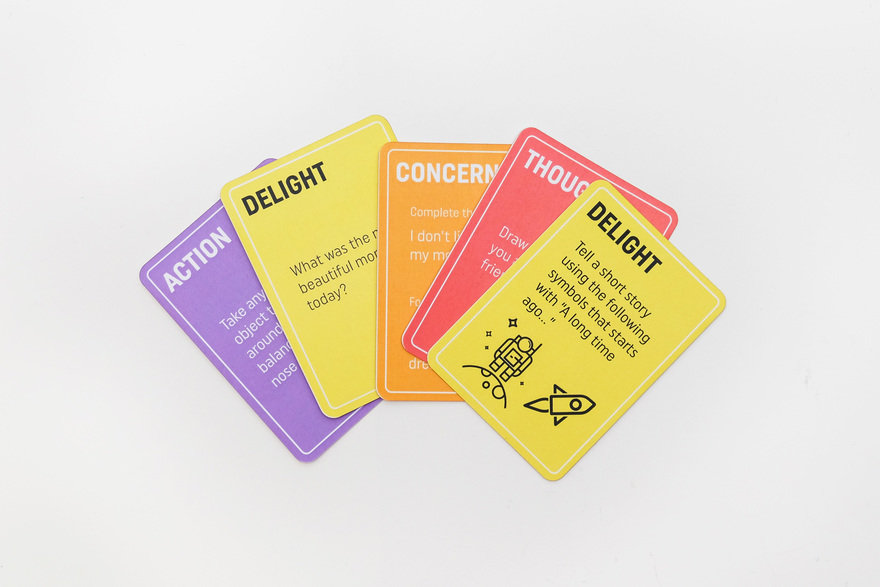 Prompts Some examples of prompts that are used in the game to make sure they get the chance to reflect on and talk about their feelings but also to make the game a fun activity. 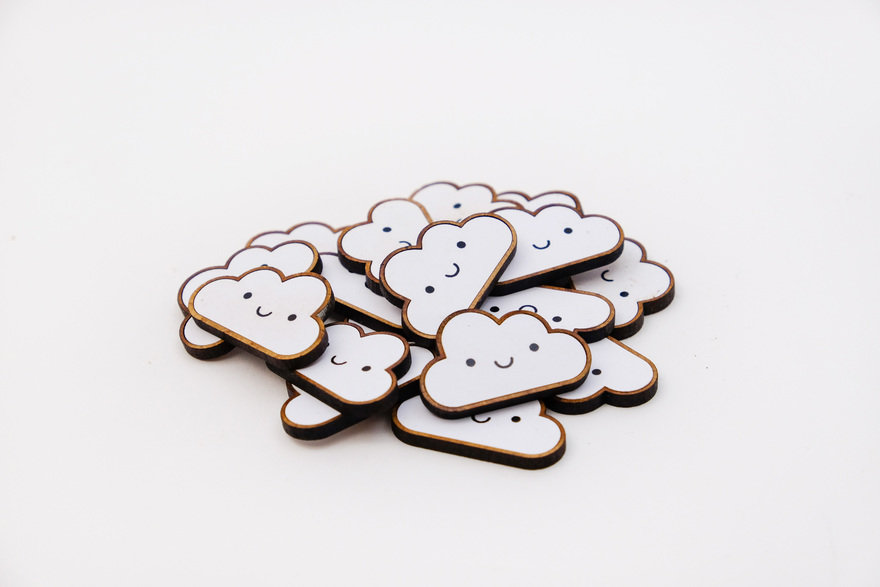 Reward Tokens After realizing that children stop engaging with the game when they feel like losing the game I introduced reward tokens. This drastically improved the game play as it makes it less obvious when a player is behind and it inverts the game logic such that they want to get through the game as slowly as possible to collect the most possible amount of tokens. This leads to more opportunities to talk about their feelings. 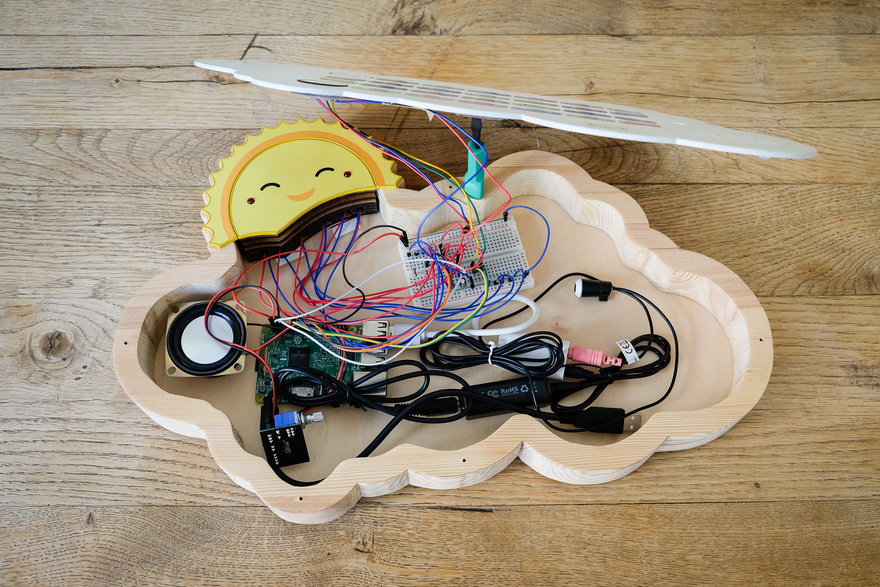 Board Game Internals The introduction of electronics was based on two observations. 1. The children sometimes left the game in a sad mood because the last prompt was about something negative. Playing back their positive statements allowed them then to always leave the game with a smile in their face. 2. Parents wished they could listen again to the things their children said during the game to reflect on them. 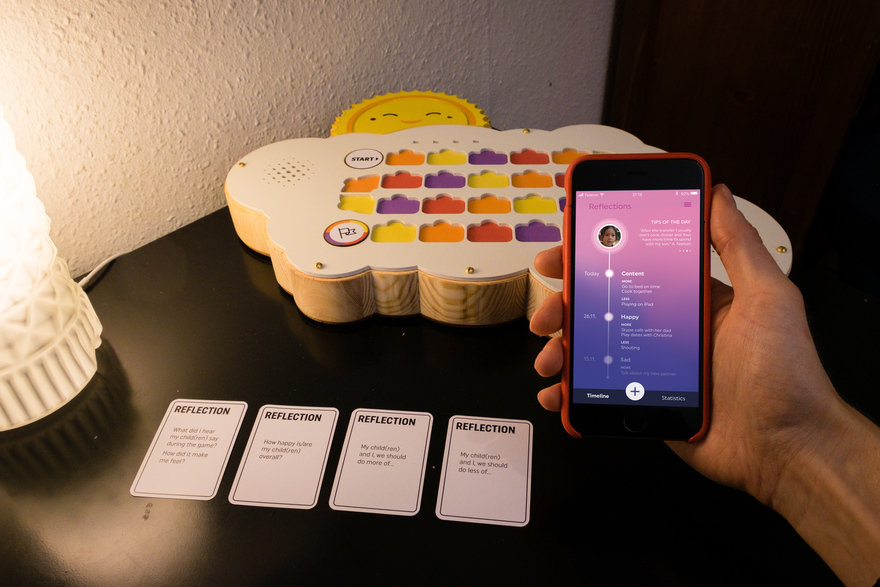 Reflection Tools for Parent This is a prototype of an app which allows the parents to keep track of their children's mental health and overall happiness over time based on the insights from the game sessions.

Conventional communication aids and therapeutic tools for kids can be daunting. The children often feel like being judged and thus hesitate to talk about their innermost feelings.
While these tools may help to communicate with the children, they usually don’t create an intrinsic motivation for the kids to use them over time. To overcome the shortcomings of these traditional tools I developed Animo using a Human Centered Design approach. By setting the children’s needs as the highest priority I designed an interactive communication game that the kids actually enjoy playing.

The game should remain interesting over time and physically appeal to different tastes. I realized this when the children started to ask me if there was also a dinosaur or a Minions version. Therefore I co-created with children to come up with different themes so that the tiles can be replaced.
The idea is that Animo is played repeatedly every couple of weeks. In order for this to work, the children need to be motivated to do so. During the research phase I witnessed many times that to make children connected to an object you have to let them take ownership over it. Thus for Animo I designed a personal token that allows only the child to start and unlock the game.

As for the game contents it's crucial to establish a set of prompts and questions that balance out fun and communication. The communicational questions should hit the sweet spot where the children have to reflect on their feelings but still feel comfortable to talk. Sometimes topics come up that may make the parent feel uneasy. These are exactly the difficult topics that the parents need to talk about with their children. I let the players draw an emotional graph to see and discuss how they felt while playing the game. I used their emotional response to modify and create new prompts for the game.

During the test sessions I noticed that the children who talked about a negative topic just before the game ended left the game with an unhappy feeling. Therefore I integrated a recording functionality. While the players talk about positive or negative topics the board game records what they say so it can be played back later.
When the game ends one of the players pushes the goal button which starts the playback of what was recorded on the «delight» fields. This allows the players to hear the positive things again and leave the game with a positive mind.

Sabine Brunner who is a psychologist I collaborated with said that «It's important to include the children's view about their parents.». As a result I included questions that make the parents understand how the children see their parents. Other tools to facilitate conversations with children often lack this bidirectionality. Animo includes reflection cards for the parents to help them think about what they could do to make a positive change in their children's lives as they listen to the voice recordings of the «concern» fields.