Designed primarily to meet the needs of gamers with limited mobility, the Xbox Adaptive Controller is a unified hub for devices that helps make gaming more accessible. Connect external devices such as switches, buttons, mounts, and joysticks to create a custom controller experience that is uniquely yours. Button, thumbstick and trigger inputs are controlled with assistive devices connected through 3.5mm jacks and USB ports. Built from the ground up through strong partnerships with The AbleGamers Charity, The Cerebral Palsy Foundation, SpecialEffect, Warfighter Engaged, and many community members. Input from these groups helped shape the design, functionality, and packaging of the Xbox Adaptive Controller.

Traditional game controllers are designed for users with two hands and full dexterity; when someone with limited mobility, who is missing a limb, or doesn't have the stamina or coordination to hold a controller wants to play- that traditional controller becomes a barrier. There are over a billion people in the world with disabilities, and the exclusion of many of them by a game input device is a huge and worthy challenge to overcome.

Currently, gamers with disabilities are left largely on their own to DIY solutions that allow them to game, which takes time, money and expertise that not everyone has. There are many charities that build custom controllers, but they're limited in reach by geography and resources.

Our challenge was to build a device that would be available to those who need an alternative game controller solution while meeting the needs of a variety of stakeholders- from end customers, to caregivers to occupational therapists and charities. 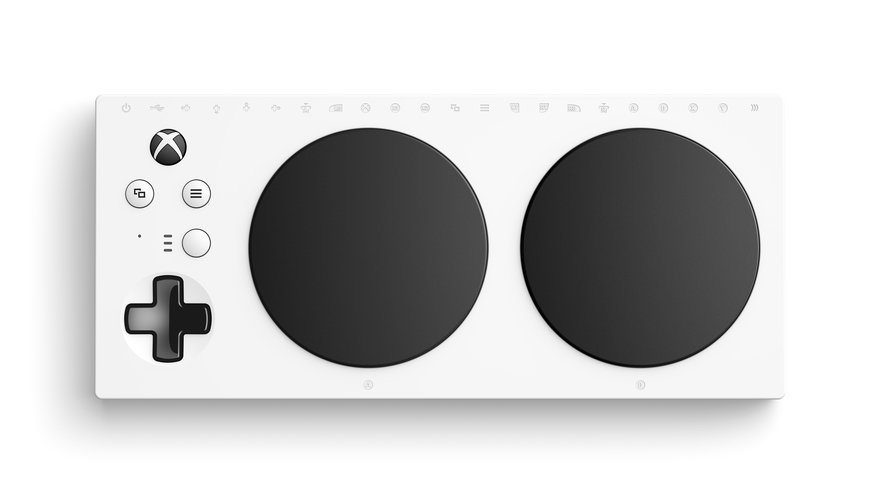 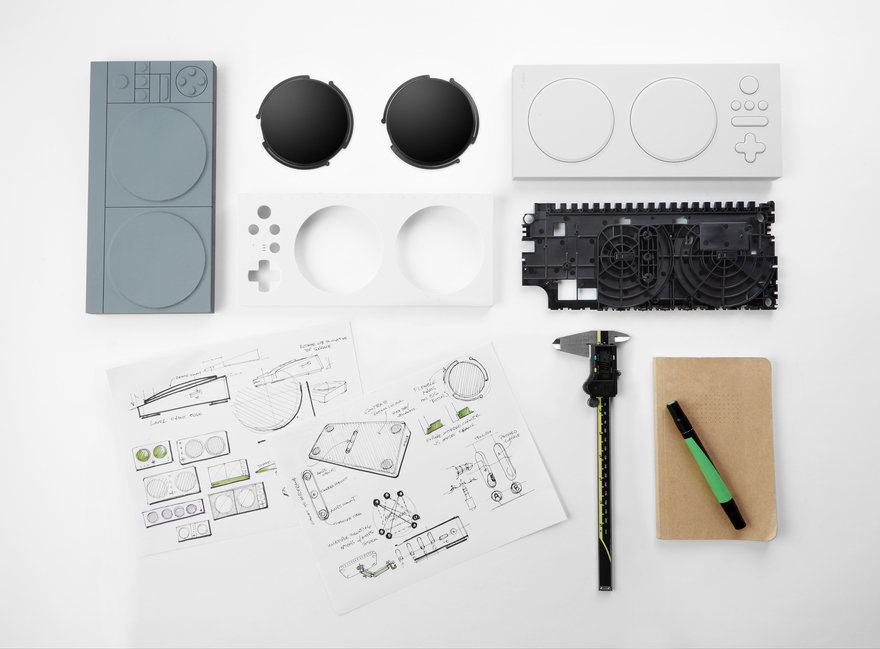 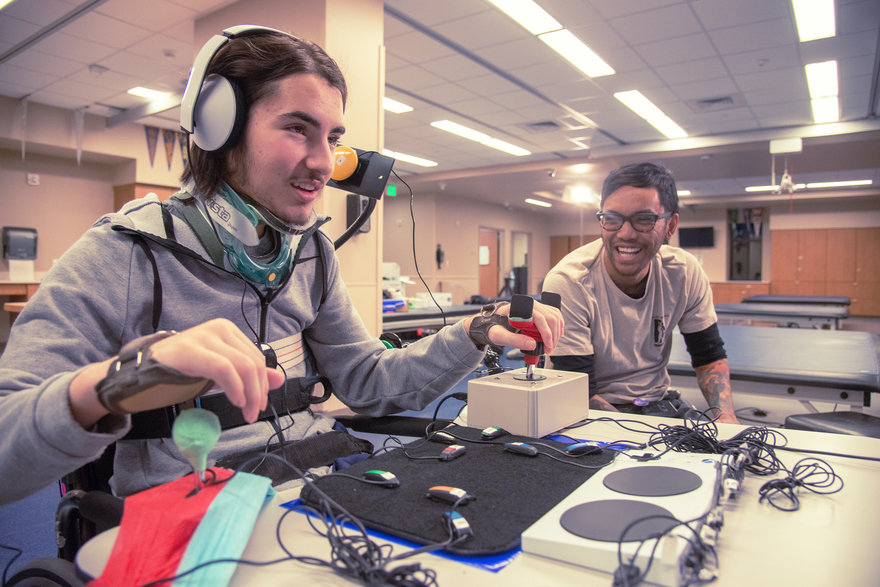 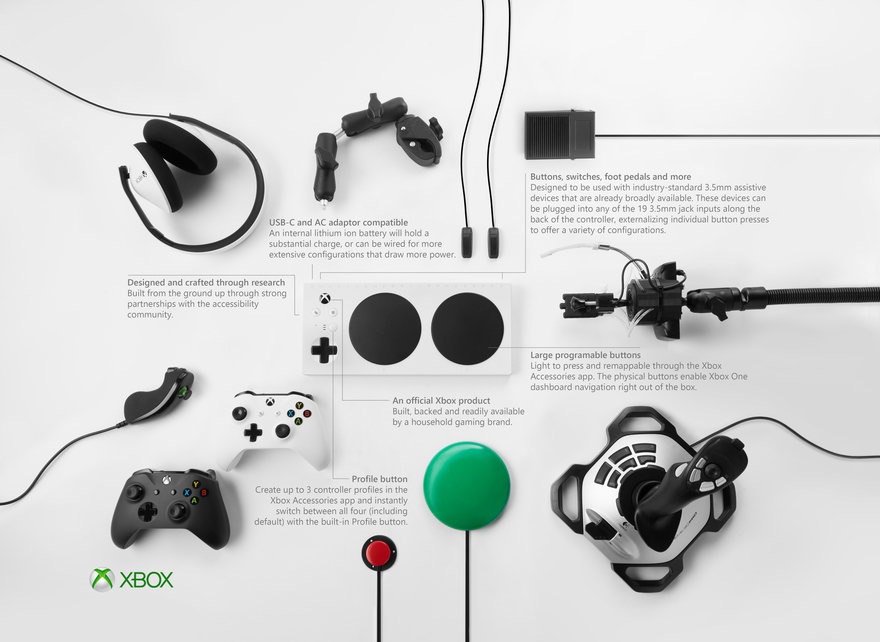 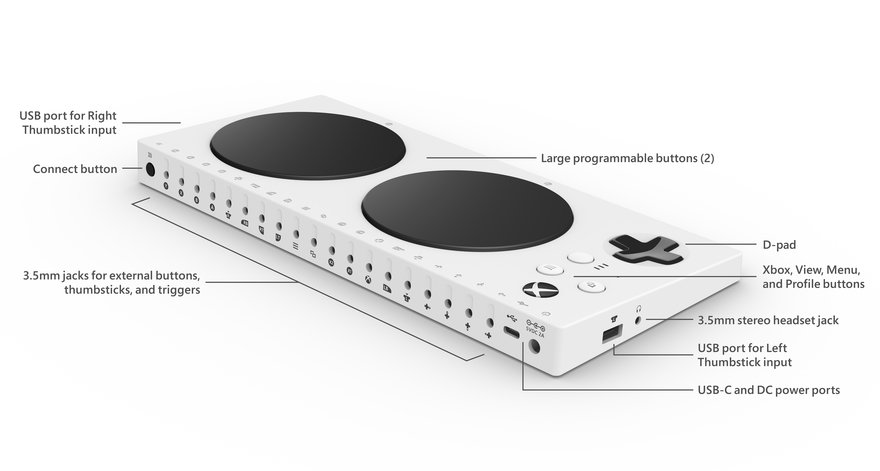 Design of the Adaptive Controller

There are not currently any widely available accessible controllers that allow gamers to create a custom set-up that is right for them; the Xbox Adaptive Controller (XAC) is the first of its kind. It is unique from the other solutions that do exist in its availability, affordability and that it is from a major gaming brand.

By making the device available online and at a sub-$100 price point, the access that consumers have to it is truly an important aspect of the product. Custom controllers or "rigs" can cost $500 or more and need to be assembled by an expert or specialized charity organization. By putting all the tools that a gamer would need to build their own custom rig in one place, their ability to be self-sufficient is hugely increased. In addition to the customer support that comes with a device from a company like Microsoft, the fact that it looks like an Xbox product is critical. Assistive technology often looks like what it is- something that you need to use, as opposed to want to use- and that can be stigmatizing to the user and make them feel like an "other". By using the same material, color palette and form language as the rest of the product line, the device becomes desirable on its own, whether you need it or not.

The XAC is designed to be able to replicate all the functions on a standard Wireless Xbox controller- 18 buttons plus two analog joysticks- which is inherently a complex input device to use if you are unfamiliar with it. To make the experience simple and accessible, each function was broken out into a discreet port and clearly labeled; a variety of widely available buttons, switches, joysticks, and other specialty inputs are simply able to plug and play. The proportions, spacing and white space around all the touch points were carefully considered to make the device appear approachable and the functionality clear.

We placed a high priority on flexibility and customizability in the design to accommodate as many different types of use cases as possible. Industry standard threaded inserts on the bottom of the XAC allow it to be mounted easily wherever it needs to be in the play space and the "breakout box" functionality of the device allows for buttons and other inputs to be spaced around a gamer so they are easily reachable. In addition to physical customization, all the controls are digitally re-mappable with an app on the console or PC. The physical attributes of the enclosure were tuned for a universally enjoyable experience as well- the sloped top and rounded edges invite resting hands, and the space between the large buttons was designed to accommodate rocking back and forth to actuate either button. The form of all the buttons references the standard controller but are enlarged and domed to make them easier targets.

The Xbox Adaptive Controller started out in 2015 as an employee passion project with no funding and no exposure. This year it was the star of both Microsoft's holiday TV commercial and Microsoft's Super Bowl ad. Through the dedication of a small team of employees, the project grew in scope and exposure and eventually became a beacon for Accessibility within the company as well the gaming industry as a whole. The importance of the XAC being built by a large company like Microsoft can't be understated- it gives legitimacy and shows commitment to being inclusive; which has been reflected in the press by the dozens of positive articles written on the device and process since the announcement. That level of exposure to Accessible Design in gaming is instrumental in swinging the industry in that direction. Showing leadership in inclusivity is critical to humanizing the work that a large corporation like Microsoft does and it demonstrates to the industry that is a worthwhile endeavor. Microsoft's corporate mission is to empower every person and every organization on the planet to achieve more. This device truly represents that statement in the way it brings gaming to a broader audience and gives options to those who do not typically have them.

Gaming is important. Not just because play is essential to human development and growth- it's important in this context because of the way it brings people together. People in different locations, different genders, different races, and all ages- come together as peers when they play games together. Up until this point, many people with disabilities were excluded from that experience. The Xbox Adaptive controller breaks down the barriers to gaming so that more people can have that experience of community and feel the joy that comes with play. By using design to make it look, feel and act like a familiar Xbox product, it sheds the stigmatization that often comes with assistive technology. This is a product anyone would be proud to play with and show off to their friends. One of the most important aspects of the XAC is that was specifically designed to not "other" the user and make them feel like an outsider.

Considering the population served by this device makes the importance of it even more apparent. For kids who may not be able to participate in sports with their classmates, they can now play on a level playing field. For a soldier who returns from service with an amputation, he or she can play the same games with their friends as before and fend off the isolation that could otherwise come from that circumstance. The XAC brings equality in opportunity to a broader audience, one who has traditionally not had as many options as most.