Design Brief: To create an interactive spatial installation for a 322-page book designed from extensive research on a chosen topic. 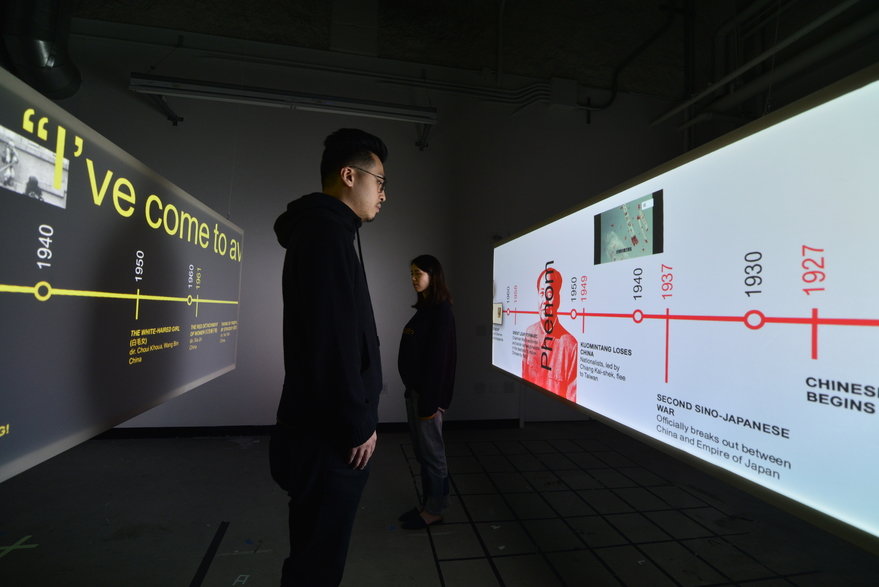 Facing Timelines of Fact and Fiction (Film) Users interacting with the timelines within the exhibition space. Brad Bartlett 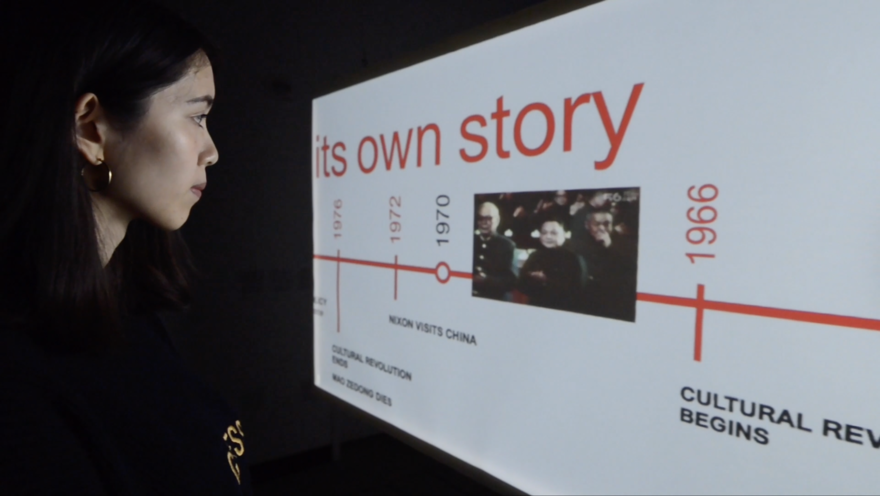 Timeline in Use User stops to read information from the projected timeline. The timeline would resume motion when the sensor detects the user's movements. 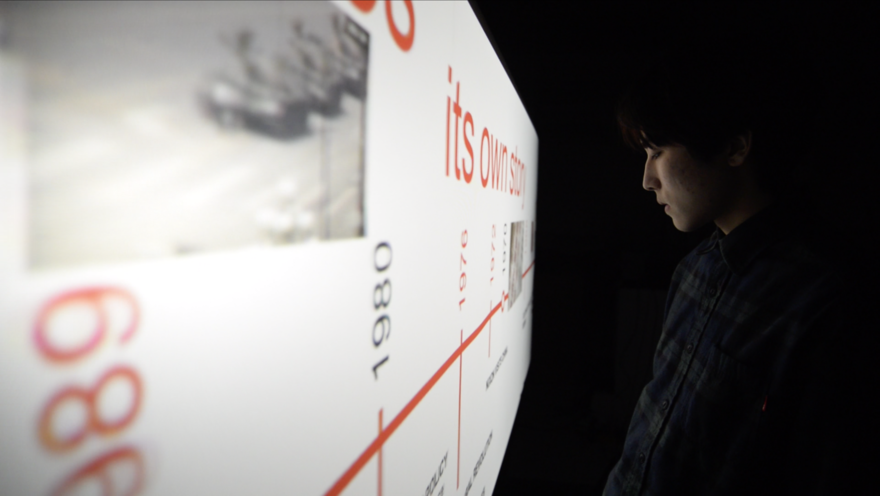 Timeline in Use User paces his experience by stopping to read a section of the timeline, which will continue to move as soon as the sensor picks up his movement. 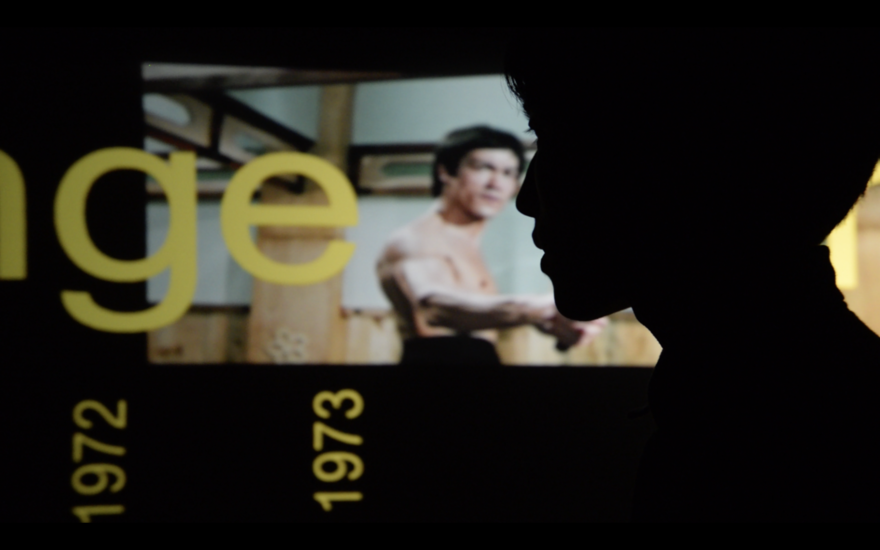 Timeline in Use Interactive timeline of significant films released in comparison to the actual events that occurred in the factual timeline. 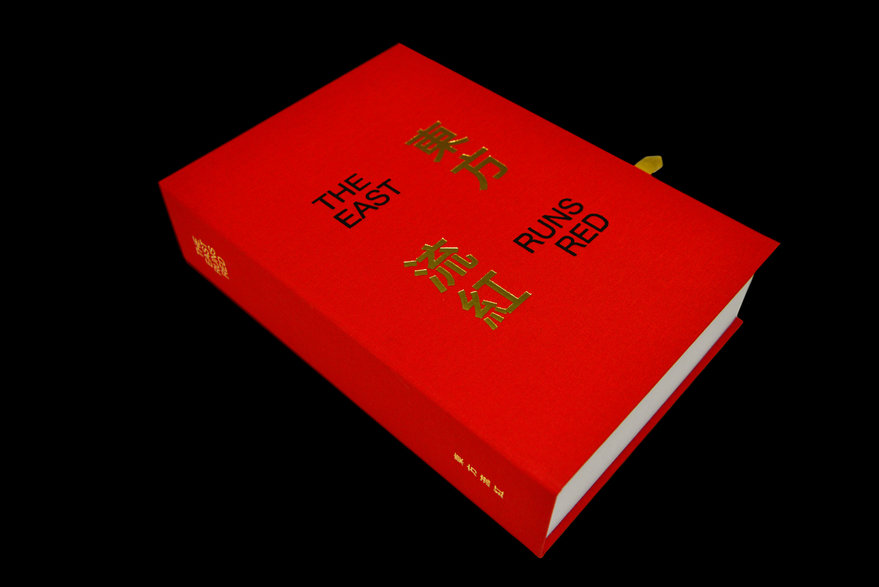 Exterior of "The East Runs Red" The clamshell box holds the main book and redesigned "Quotations of Mao Zedong" beneath it in its own compartment. The elaborate gold foil and packaging is a socio-political commentary of the way the Chinese government sees its own image. Brad Bartlett 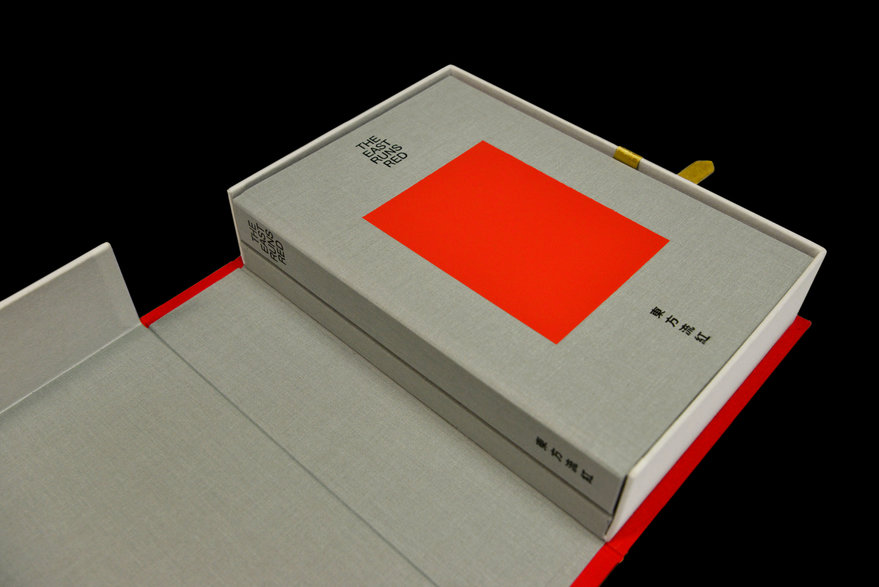 Interior of "The East Runs Red" The book as stored within the clamshell box; its more simple grey linen reflects the juxtaposition of the box. The red foil stamped on the cover conveys the significance of the way Chinese societies and film—in China and the diaspora—are still influenced by the events of the 20th century, symbolized by the dimension of "little red book" by Mao Zedong that fueled propaganda. Brad Bartlett 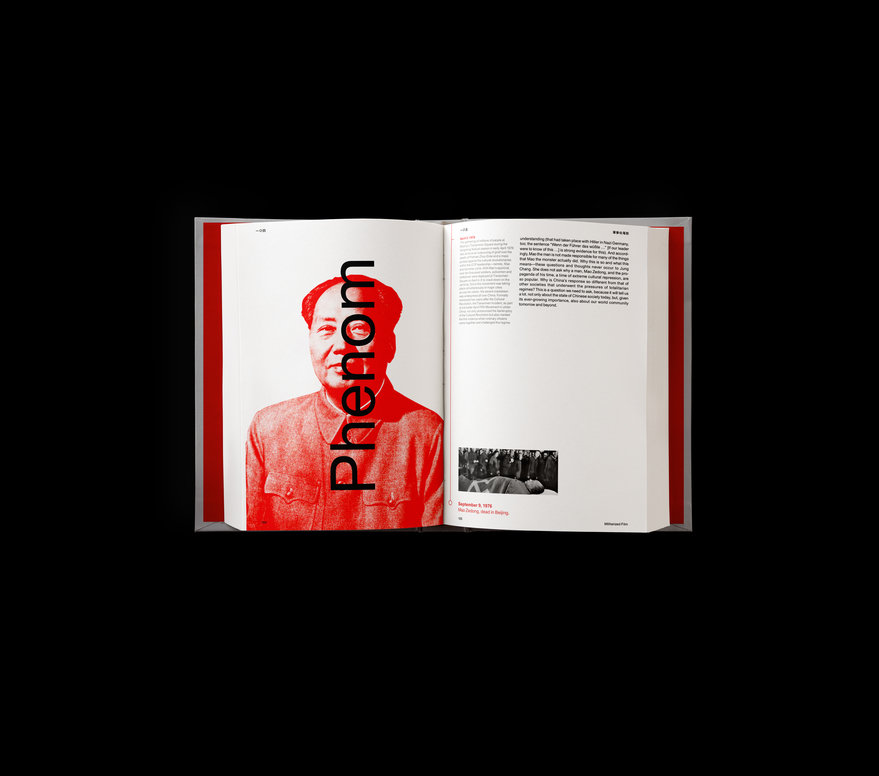 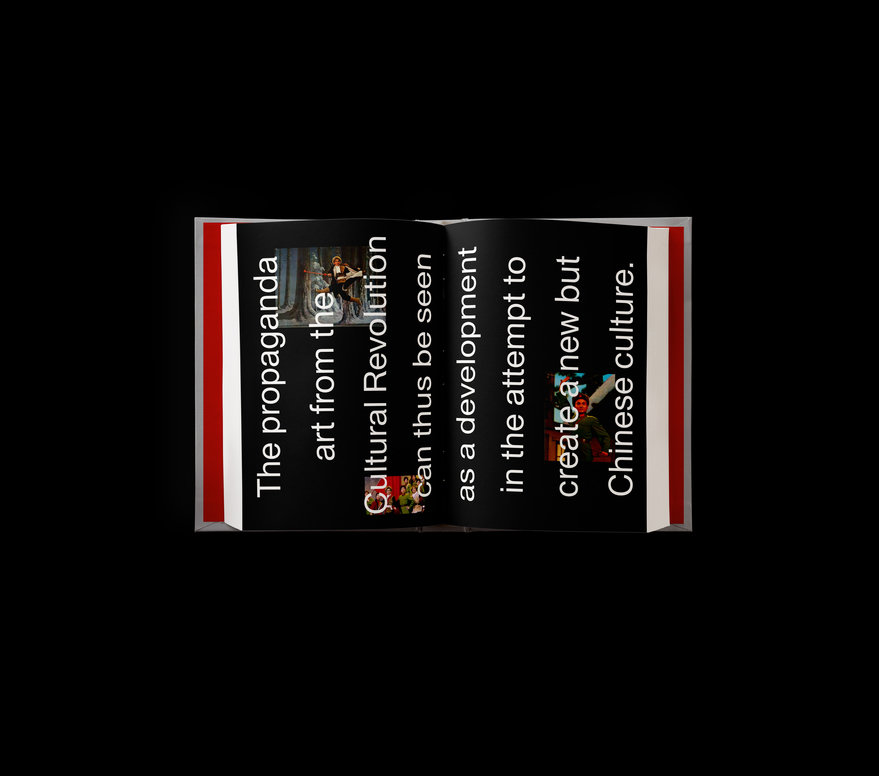 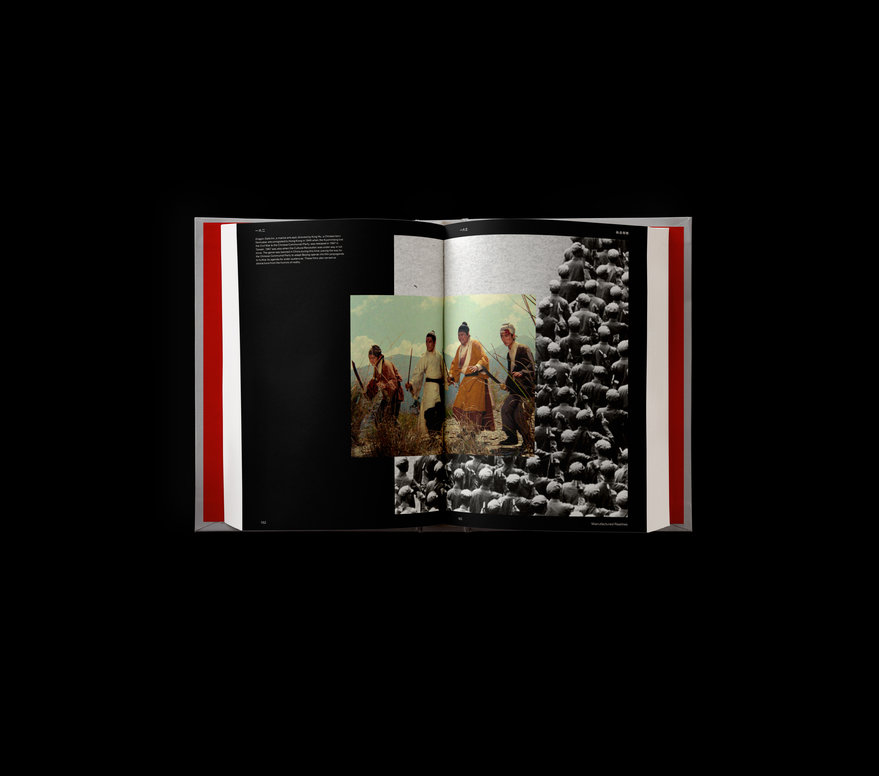 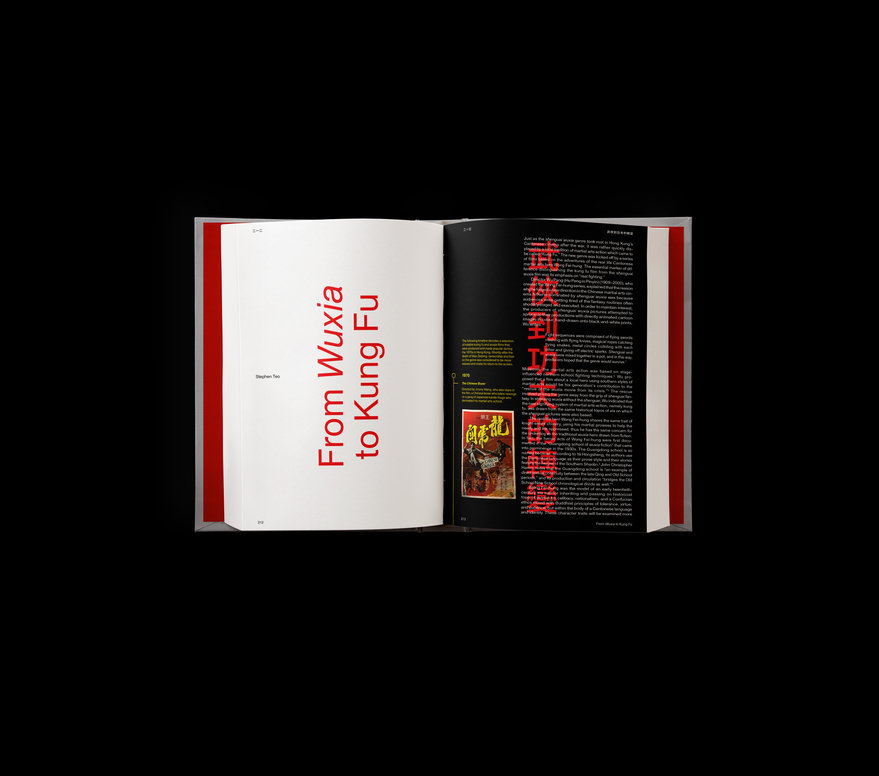 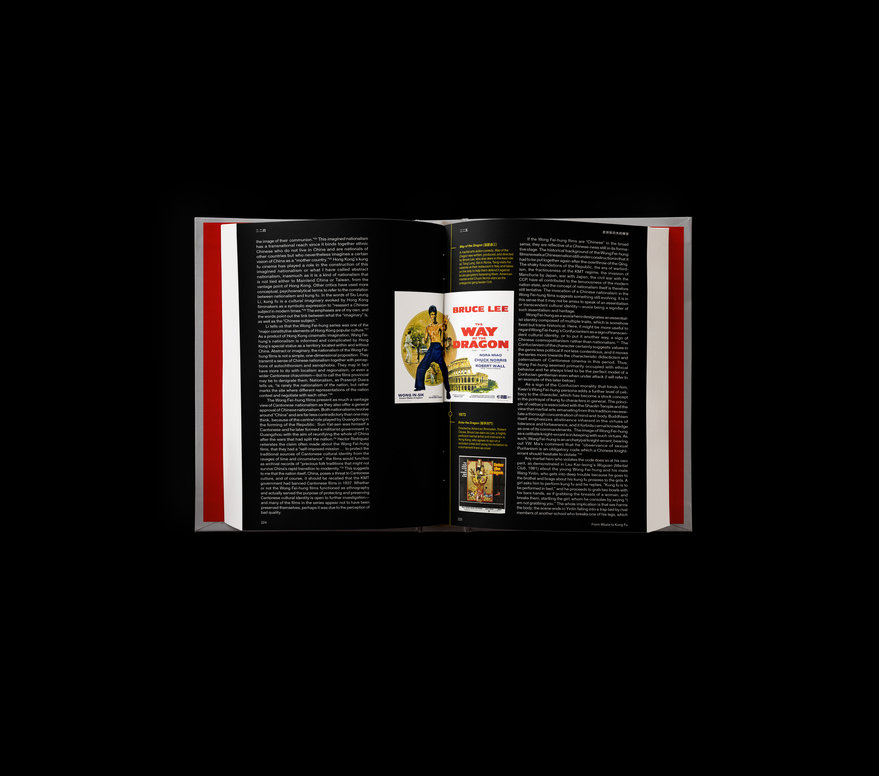 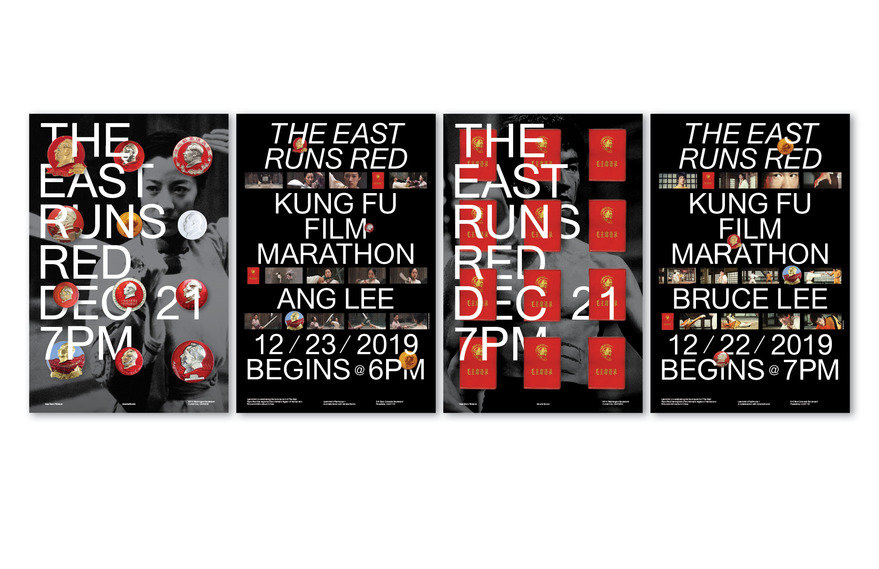 "The East Runs Red" began as a book designed from extensive research to investigate modern Chinese history through the lens of Chinese martial arts cinematic legacy. This installation is a spatial extension of that book and aims to translate pivotal moments in history and its contentious effects on martial arts films into a physical space. Comprising two facing timelines (historical events and film releases), users would walk into the space between the 9-foot screens onto which timelines are projected. Interacting with Processing code, the connected Xbox Kinect sensor from above picks up the user as a hotspot and determines the movement of both timelines from the walking speed of the user. This allows the user to control the pacing of each displayed timeline in order to customize the speed and direction of their reading experience. The juxtaposing timelines intend to educate the user by connecting traumatic events of modern Chinese history with the releases of notable Chinese martial arts and propagandistic films.

Because the challenge was to extend a project that primarily resulted in a book, I took a slice of the book—a recurring timeline graphic designed in conjunction with the body text. The timeline within one chapter of the book displayed martial arts (when it was censored and eventually banned in China) and Communist propaganda films released during the Chinese Cultural Revolution; in another, it showcased the releases of notable Hong Kong kung fu films to showcase the rise and return of the genre. Taking these concepts, I designed dual timelines—one for film, another for historical events—to showcase the dualities of fact and fiction. The final installation conveyed the two ideas within an immersive 3-dimensional experience for the user to learn about the two narratives and creating a connection between them.

The scope of the project required the use of one or more high definition projectors with narrative-driven content projected onto a three dimensional space or form. The audience would then trigger the interaction through their movement thus activating the space and the information depending which way them moved.

During the final presentation, "The East Runs Red" installation attracted many users, who enjoyed engaging with the timelines and walking back and forth to watch video clips and read about pivotal moments in martial arts cinematic history. The takeaway was successful in several users remarking discernment of the cultural impact between film and history however they enjoyed the experience without feeling the pressure to read timed content quickly or wait for the next cycle of a projected video.