Meet Serve, the newest member of the Postmates fleet and the first autonomous delivery robot designed from the ground up by an on-demand delivery company. Serve's Socially-Aware-Navigation system brings together design and technology in an entirely new way for sidewalk rovers. Taking a design-first approach, Serve is built to respect cities, meet customer demands, and help local businesses sell even more.

Postmates 'X', the skunkworks R&D team behind Serve spent the last few years combing through millions of deliveries, researching interactions, and testing multiple autonomous delivery prototypes across the country. Operating in stealth, we partnered with the 'X' team tackling their most pressing challenge: making autonomous delivery a welcomed reality by designing a robot that is loveable at first sight.

Amongst a sea of dystopian white boxes roving the sidewalks, Serve represents a new take — fresh, iconic, irreverent and always culturally relevant. Bold in both icon and personality, Serve delivers your burrito with a wink, reminding us that technology is here not only to help but also delight. Distinctively "cute" eyes and a wrap around LED strip grab attention communicating Serve's next move. A strategically placed Velodyne Lidar unit, NVIDIA XAVIER processor and twelve-inch electric hub wheels maneuver Serve through crowds, climbing curbs, and routing deliveries away from congested streets and onto sidewalks. 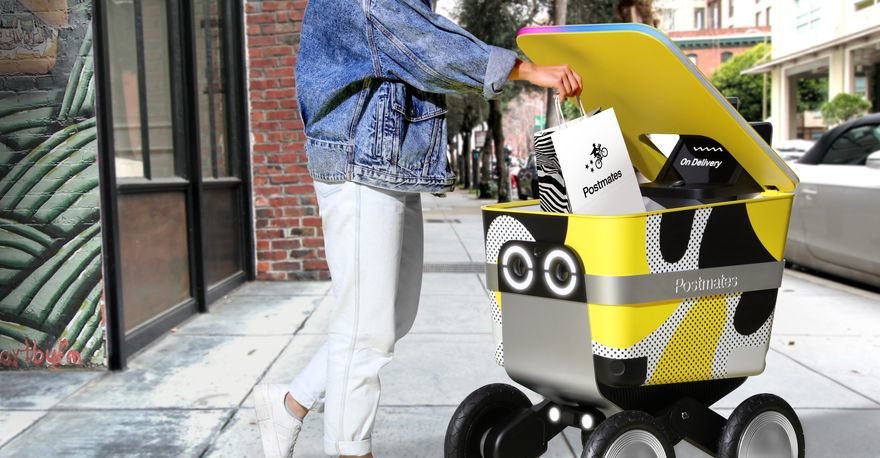 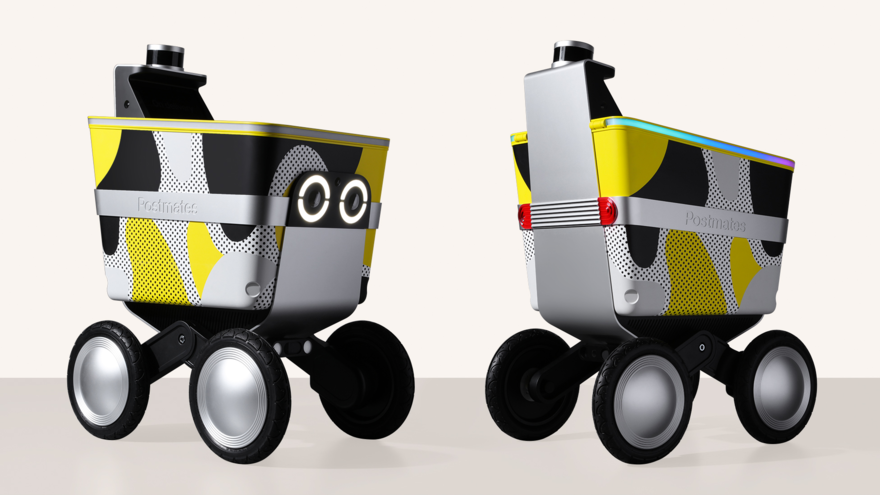 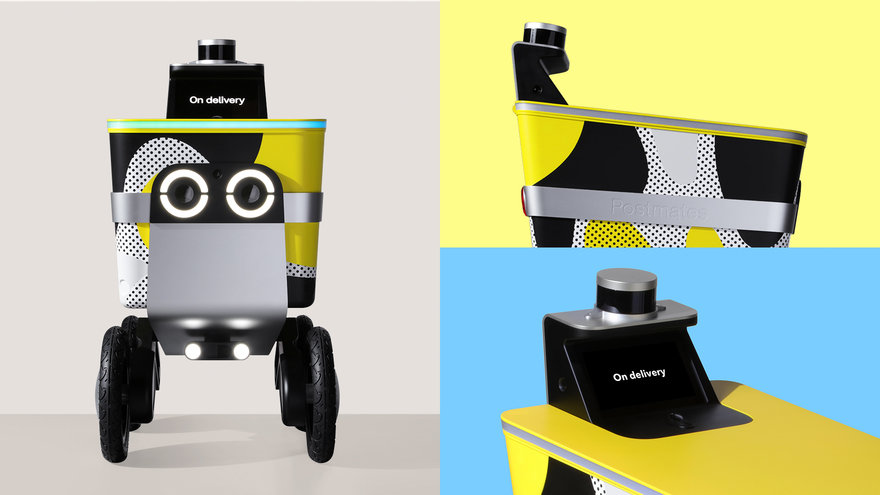 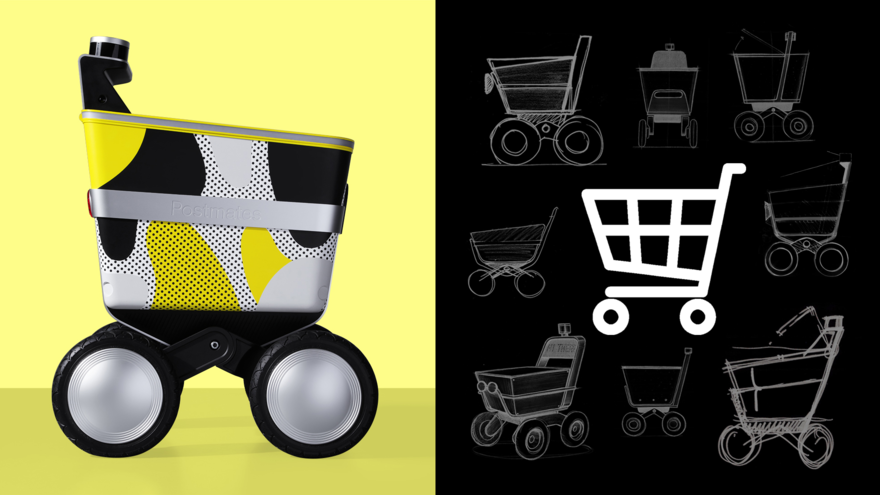 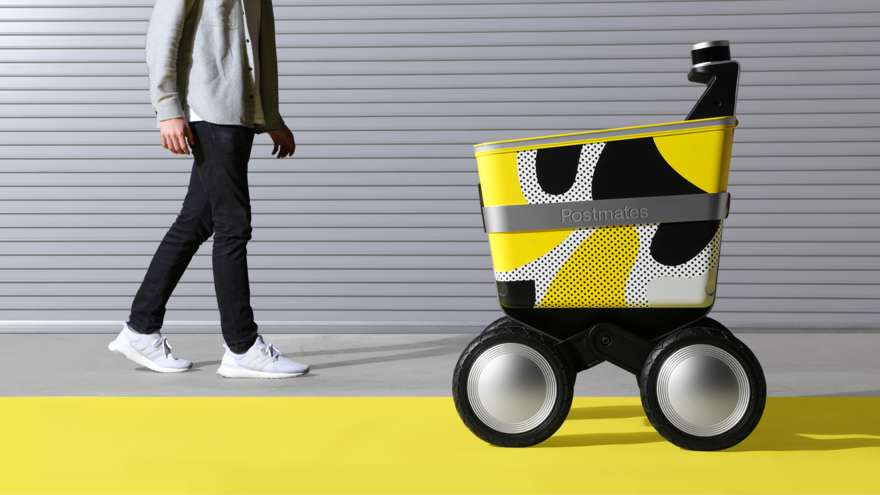 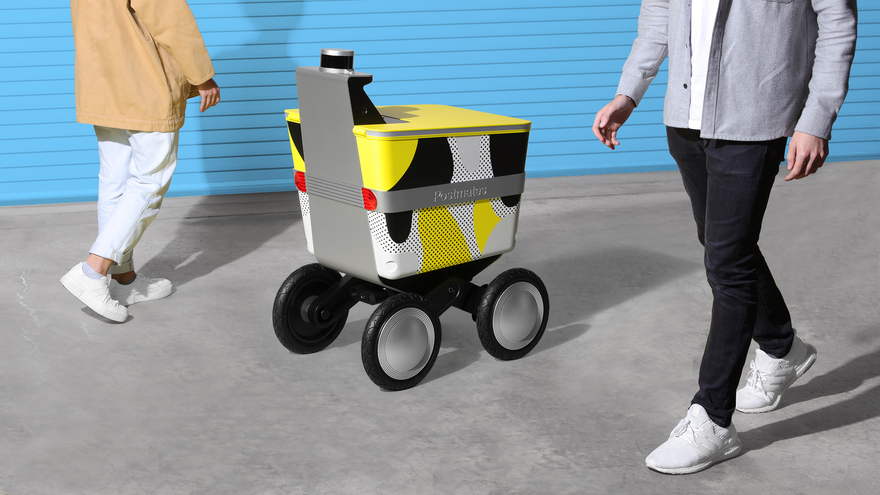 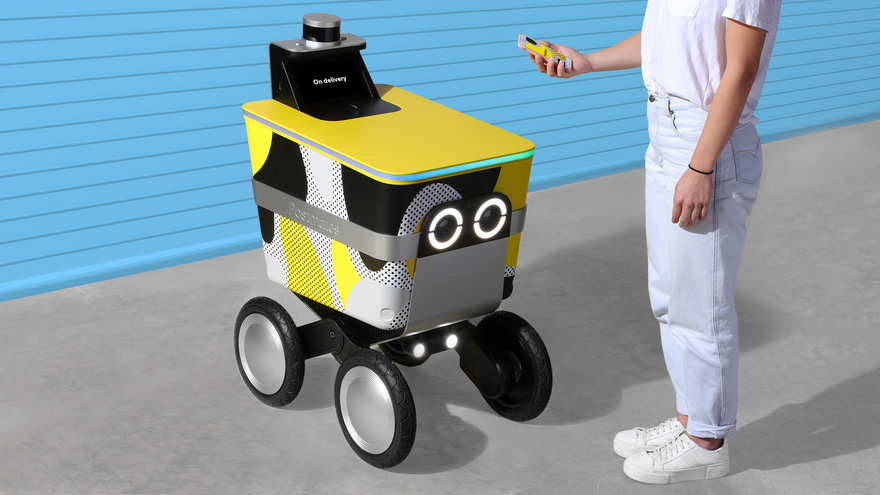 Robots are behaving in ways people are not accustomed to, encroaching on personal and public spaces and disrupting societal norms. There are ways we communicate and choreograph our movement through public space continuously as a society — signaling to cars and pedestrians at crosswalks, reading subtle cues to politely pass on the sidewalk, or enter a doorway. We haven't established that language with robots yet.

Educated by prototypes running the rough streets of San Francisco's SOMA district, we were tasked with giving Serve a true animated character: a distinct behavior combining form, function, voice, vision, and movement into a seamless 'being.' From uneven sidewalks to disgruntled pedestrians, autonomous robots must withstand everything from a high curb to a vandal's kick. With its large empathetic eyes and sturdy aluminum chassis, Serve is a robot you couldn't bring yourself to mess with.

Postmates, a tech unicorn, has strong brand recognition and a loyal customer base. Championed by the likes of Post Malone and Kylie Jenner, Postmates' is fresh, bold, and culturally relevant. As we designed their first delivery robot, it was imperative that their "fresh AF" attitude resonates throughout.

From the iconic face to the bold vinyl wraps and attitude Serve is a true ambassador of the Postmates brand. From the outset, our teams agreed the robot needed recognizability and charisma to become the Emoji of autonomous delivery.

In the cultural landscape, the trend towards designs that take the 'spaceship' mono-form approach — austere, sensor-loaded, and sterile — dominates. Based on our research and application of autonomics and technology design, we took the opposite approach. Serve is friendly, quirky, and cute. From projecting its movements and intention through lights and gesture to a form that has an intuitive sense of direction, Serve speaks for itself and community on many levels.

Putting a spin on the traditional shopping cart — the ultimate e-commerce symbol — we designed a robot with a wink, delivering a moment of joy along with your food. A blend of utility and expression, Serve's vernacular speaks to its purpose but also makes people smile.

The chassis is made from a simple bent aluminum sheet, creating a strong cradle for the roto-molded payload. Stout aluminum bogey arms form Serve's active stance, helping climb curbs and other urban obstacles.

We took great care when integrating the vast array of sensors needed to operate Serve. The lidar resembles a delivery cap. Machine learning cameras double as eyes. Ultrasonic sensors are hidden in the vinyl art wrap. Serve's easy to change vinyl "skins" and fully animated eyes, LED ring, and sounds ensure no two robots are the same transforming the roving robot from a symbol of Big Tech's invasion of public space into a lovable local neighborhood mascot.

Being at the leading edge of a new product category — autonomous delivery — user experience and interaction design has been critical as our joint teams develop a new language for urban robots interacting with humans. As many people will be experiencing their first autonomous delivery with Serve, everything from its purpose and directionality, to the orientation of the payload is intuitive and relatable.

Serve's digital & physical behavior is a language touching multiple interaction points along with the personality it projects to the public as a positive presence on the sidewalk. Dynamic lighting in the eyes, a band of LED lights surrounding the top contour signal movement and suggest 'state of mind' (e.g. 'I am waiting,' 'I'm about to move') informing pedestrians of a sudden change in direction.

A 10" color LCD touch screen is optimally angled for customer interaction and upon delivery bridges the App and physical experience. Customers unlock the cargo by using the touch-screen or their mobile phone. The screen also communicates steps, authenticates orders, and even allows users to ask for help from a human at HQ via a physical call button. Twin speakers in the lower chassis project a custom suite of expressions and sounds giving Serve a true voice.

From a logistics standpoint, Serve fills a void in the last mile delivery web that is currently underserved. Sub 1-mile deliveries are often not worth a delivery driver's time. Roads clogged with ride shares and buses can make a block feel like a mile. Serve, however, nimbly navigates sidewalks at a consistent 3- 5mph roll, delivering your food effortlessly at a push of a button.

From external partnerships with automotive companies to Postmate's own in-house robotics supply chain, Serve allows Postmates to test delivery routes on sidewalks without impacting a single Postmate and helping retailers sell even more during peak periods while reducing car congestion.

Postmates is also testing Serve at senior living communities in Northern California. There, Serve is learning to operate with people in mind; while refining its Social- Aware-Navigation technology to respect our elderly or disabled neighbors on sidewalks that people use daily.

Fresh home delivery is no longer an urban legend but a routine. Fueled by the digital economy, on-demand services are putting the customer first and foremost. At this crossroads, we are witnessing a clash of technology and culture. While much has been done over the last decade to humanize technology, we are now entering a new age of both humanizing and socializing robots. We know Serve will not be immune to vandals or loved by everyone, but the response to its debut in December 2018 revealed it is already loved by many — upon first sight.