Squad is an application designed for tweens to engage with their first smartphone, downloaded by parents limited to a three month provisional period which could help iGen be more conscious about the negative effects and risks of social media. Squad aims to enhance creativity and thinking skills towards social issues by collaboration with peers to change the expectations of iGen from the social media channels that they will engage with after this period. As a result, children would become better communicators with more thoughtful, conscious, and empathic approach by being active social thinkers using social media as a meaningful channel.

These days kids tend to get their first smart phone at the age of ten, to sign up (illegally) for their first social media accounts by 11, and to measure their worth through online interactions. But while many researchers were focusing on the phenomenon of social media addiction among adults, few were focusing on how it was affecting the iGeneration--children and young adults born between 1995 and 2012. All the other design examples can be considered as reactive or temporary solutions to the current problem without targeting any specific age group. Squad is a unique design solution that targets iGeneration specifically since they experience the negative effects of social media by being born in digital era. It is designed as an antidote a three-month provisional period when tweens with new smart phones could learn about social media's risks and rewards through a carefully structured app. When parents pass their old smart phones along to their children as a common practice they can download the Squad app. Through the app, their children can create unique profiles, by selecting influencers as persona, defining their hobbies from art to sports and their a social interest from a list of possibilities including nature, education, politics, and more. Once they complete these, they're assigned to a Squad—three others who they will work with—sometimes online, and sometimes in person—to develop a creative project around the social interest they share. These culminating projects—narrated videos and slide shows—are captured through the app then published, so children can share them with family and friends. During this provisional period, tweens also move through a series of prompts—short readings and quizzes that build awareness about responsible social media use.

There is not any design solution similar to Squad as a proactive approach to create awareness. Squad aims to create a provisional period as a smooth transition when kids first start to engage with their own smartphones while educating them about the negative effects of social media and create awareness in a unique way. Thanks to Squad, smartphones and social media is served to kids as a unique tool to empower them to boost their creativity and social thinking skills by collaboration.They will seek for real connection and real interaction by being socially active which would help them to a have self esteem and more independency. 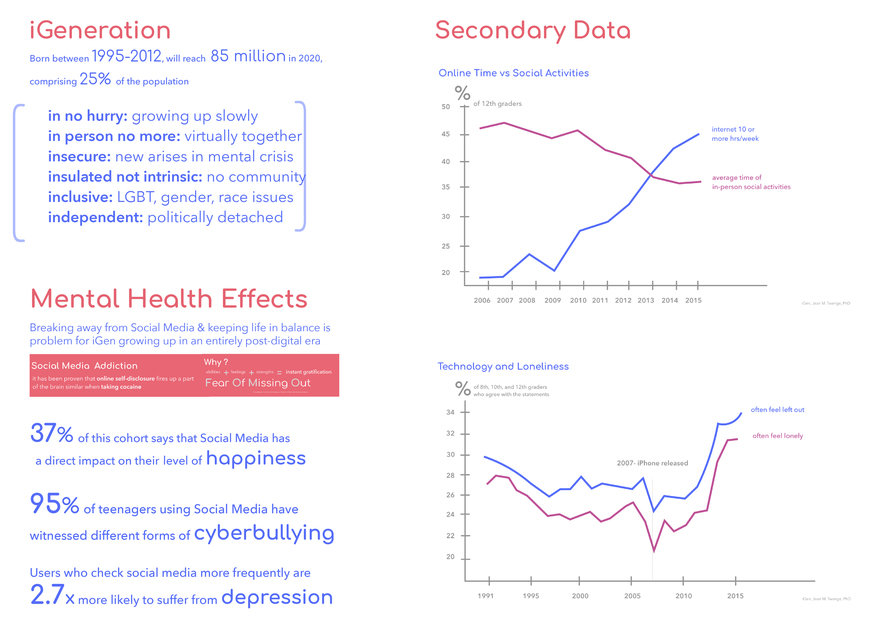 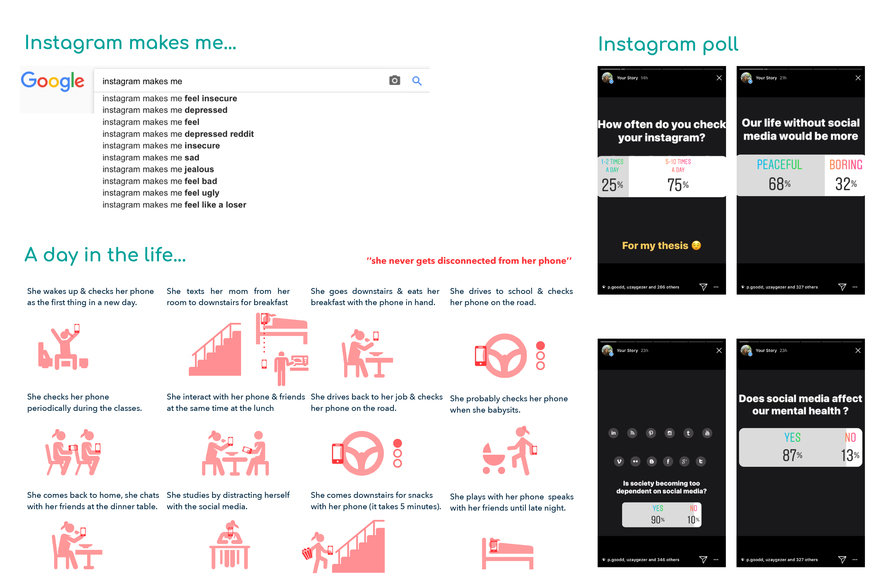 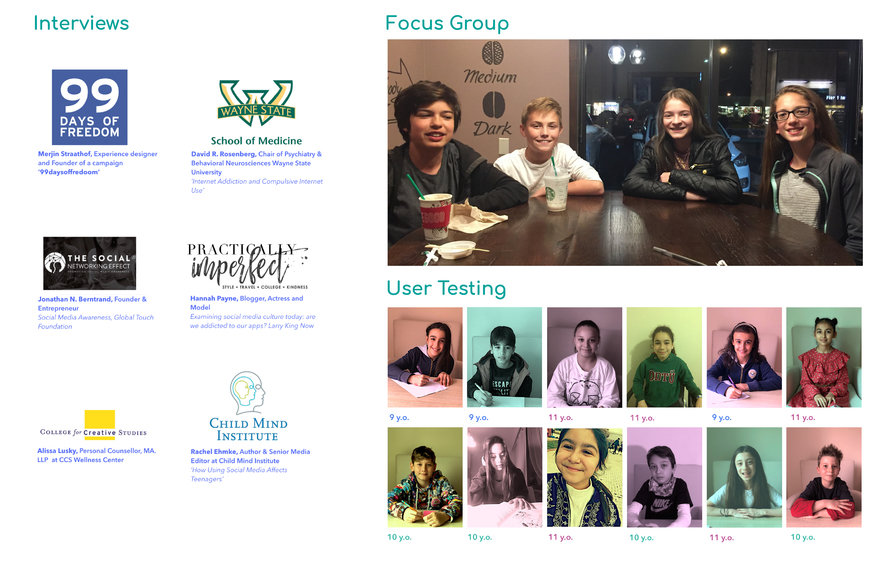 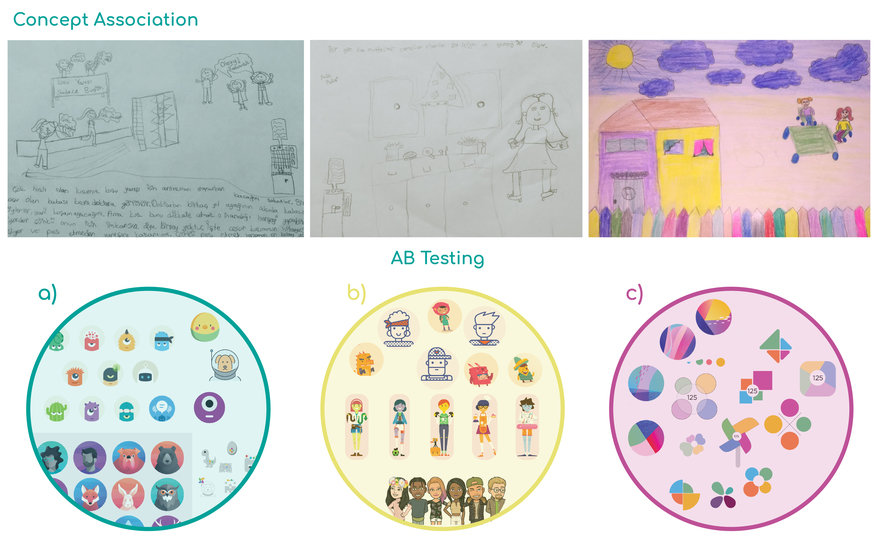 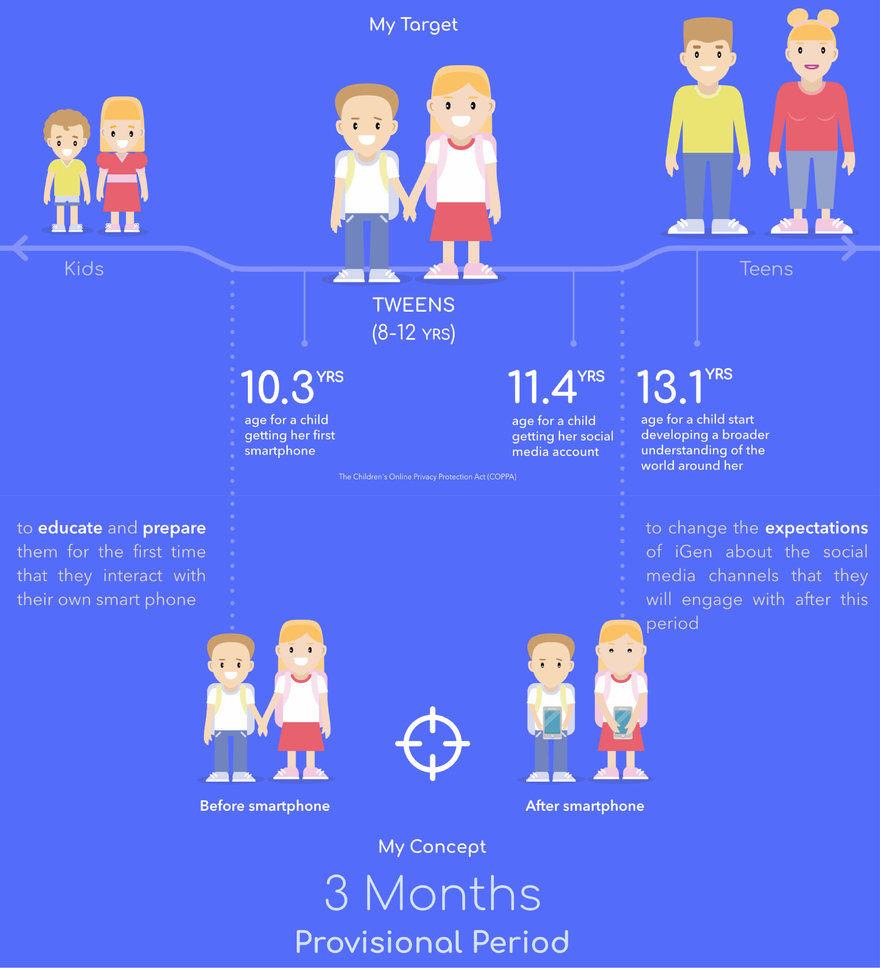 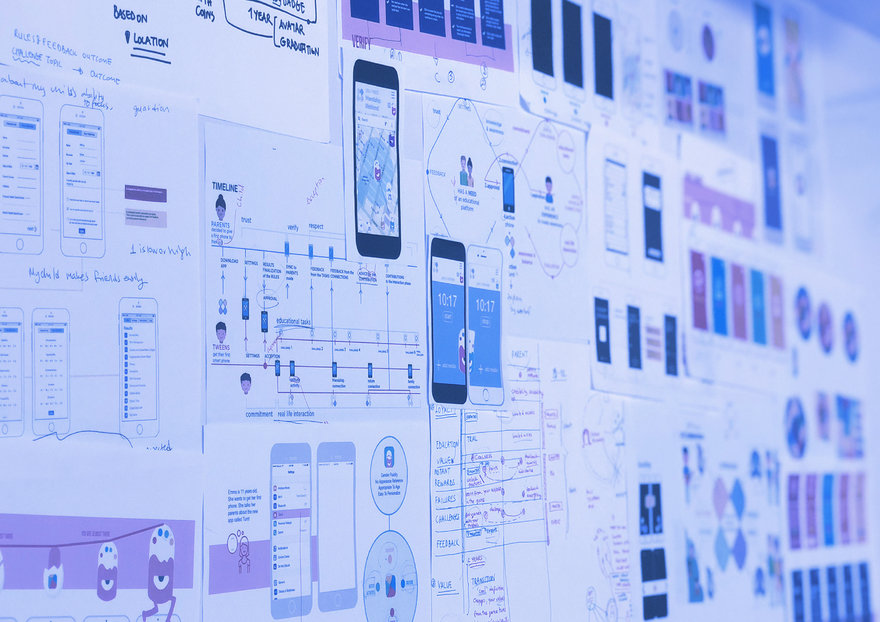 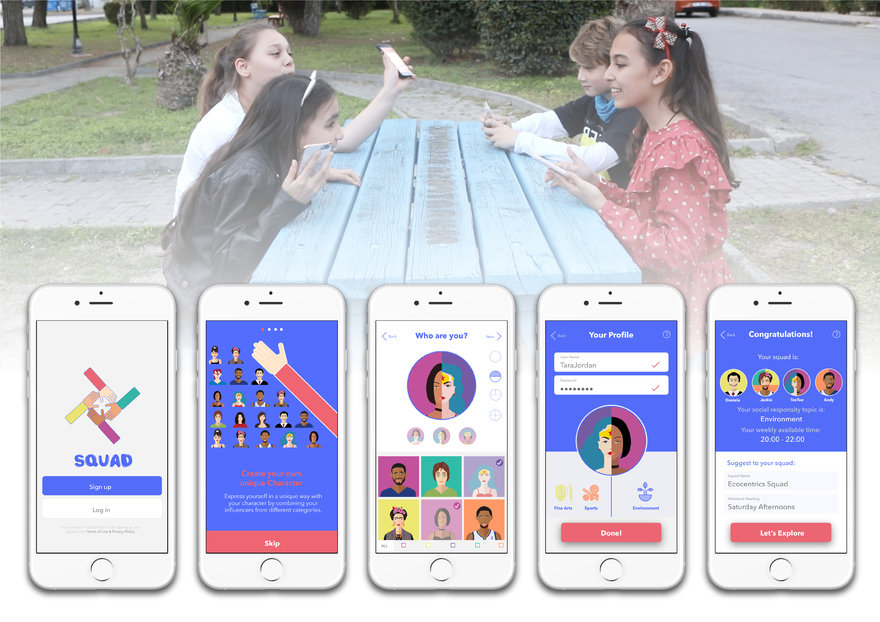 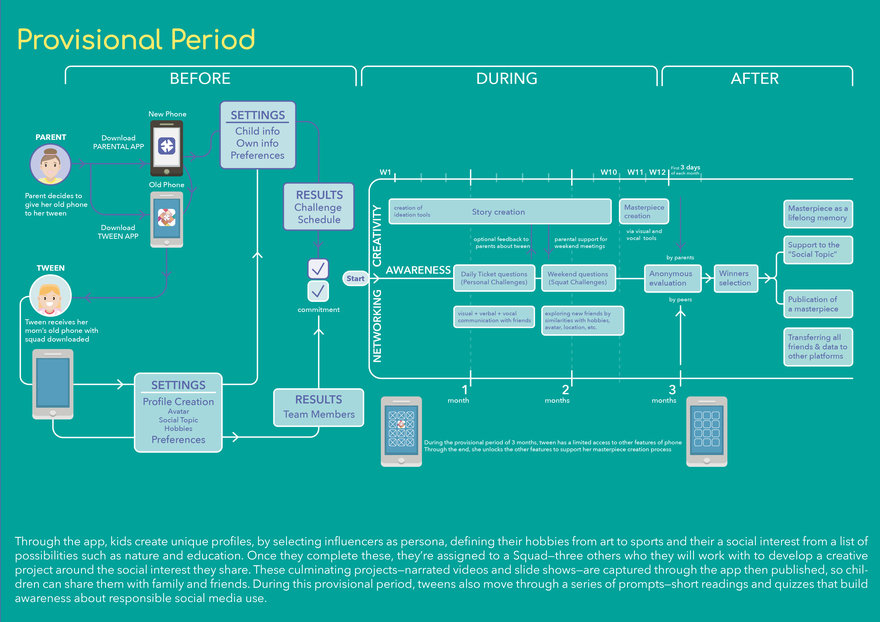 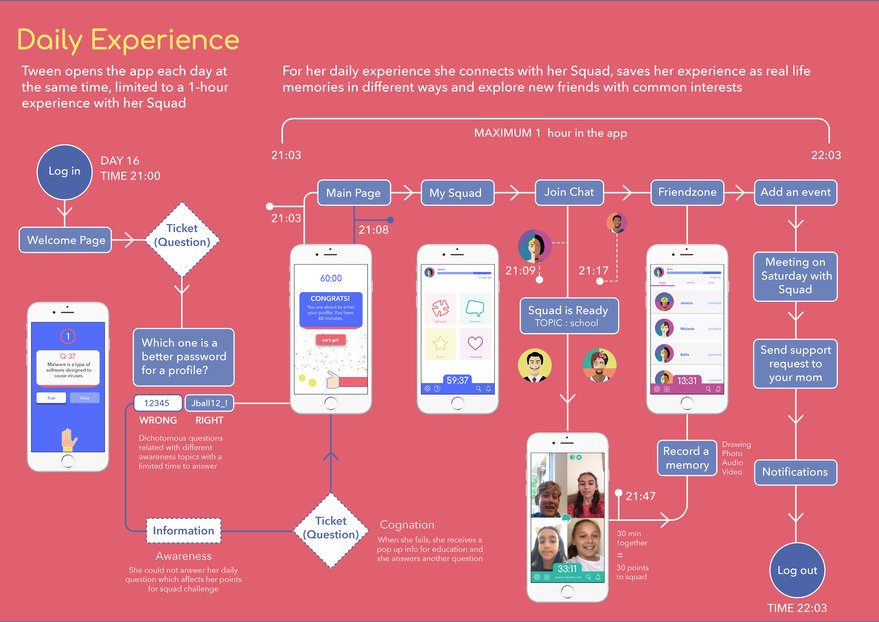 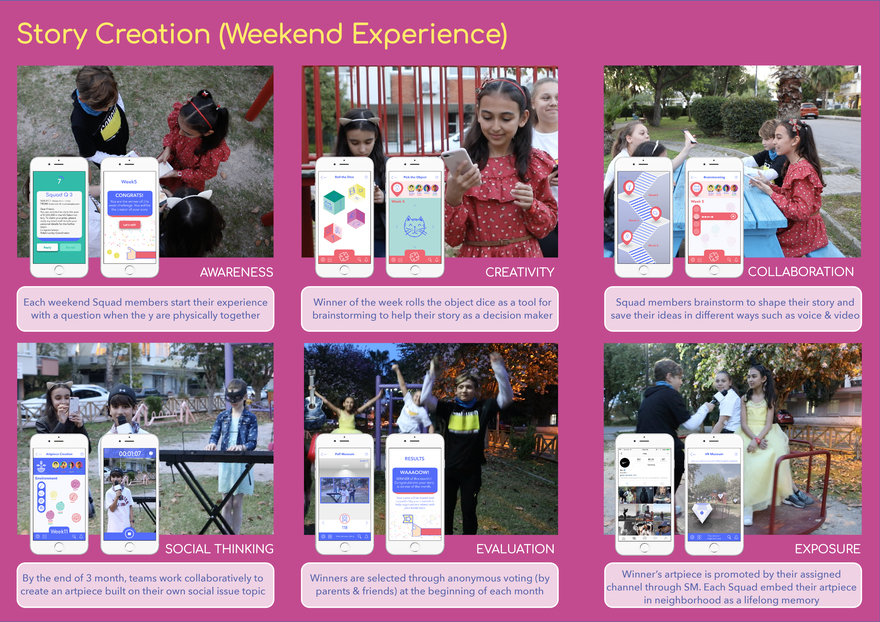 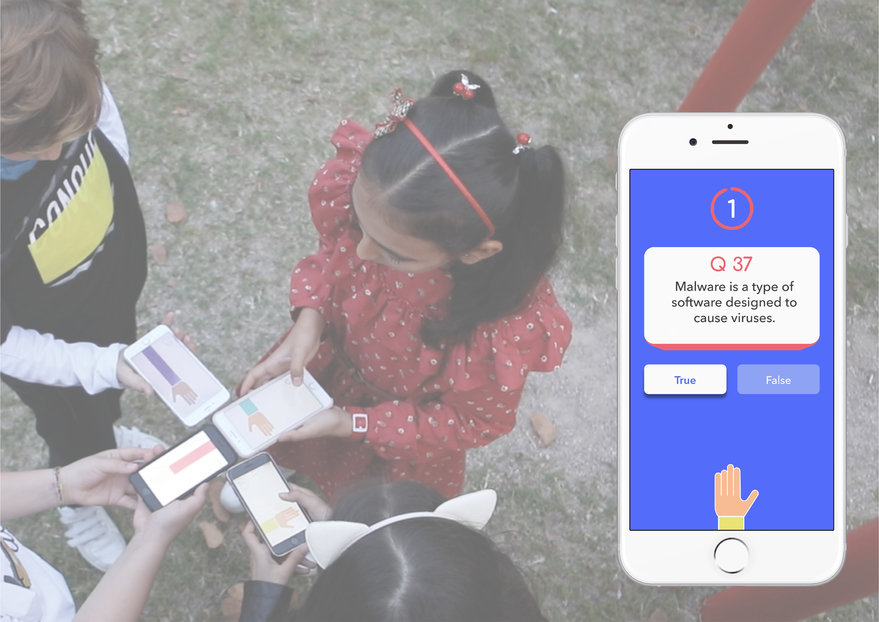 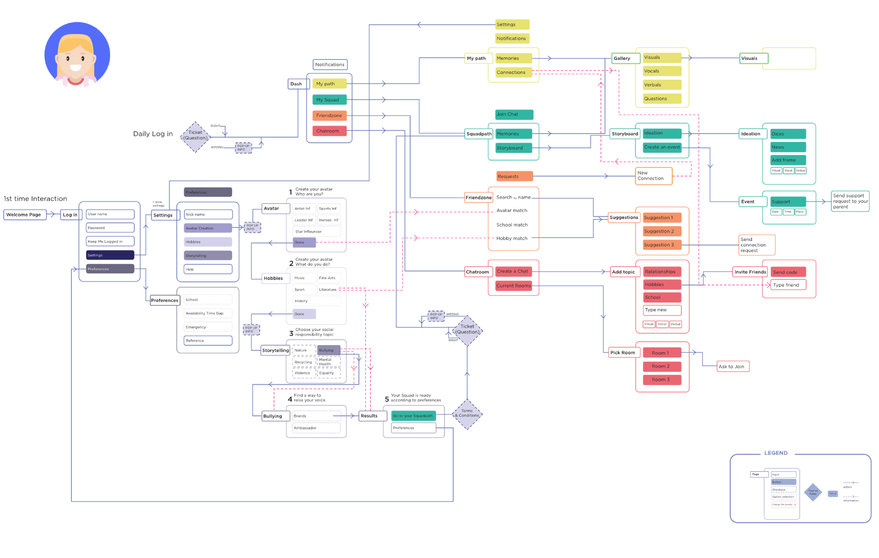 Social media has integrated and profoundly changed everyone's daily lives. Spending excessive amounts of time using social media leads to negative effects and interferes with the other aspects of people's lives. As with any other addiction, breaking away from social media and keeping life in balance is so difficult especially for the iGen who grew up in an entirely post-digital era. Self disclosure, instant gratification, FOMO and constant need of comparing self with other people create virtual bonds through social media and help people to reaffirm the reality to feel better. Social media addiction as other types of addictions, was associated with several serious mental health problems such as anxiety, depression, social phobia, low self-esteem, ADHD and hostility. It is claimed that social media addiction is the common source of different types of worry among highly anxious kids. In the US, there was a 60% rise in the teenage depression between 2010 and 2016. 95% of teenagers using social media who have witnessed different forms of cyberbullying on social networking sites claim that cyberbullying increases their levels of emotional stress.

Researchers assert that engaging in social media frequently resulted in reduced socializing skills in real life. People who spend their two hours a day on social media, tend to be socially isolated two times more than others.

As the first phase of research, I've used Instagram poll is to raise question marks on users head by asking some ironic questions about social media through social media. Instagram is a unique platform to source accurate data from the audience, and it is an ironic and unique way to understand the user's opinion about the current phenomenon, especially for this research study.

1) David R. Rosenberg Chair of Psychiatry & Behavioral Neurosciences WSU ''Internet Addiction and Compulsive Internet Use' and Vaibhav A Diwadkar Ass. Prof. at Psychiatry & Behavioral Neurosciences Department, WSU - ''Brain Imaging Research Division Lab''. The purpose was to understand the perspective of experts and to learn details/results of their current study ''Internet Addiction and Compulsive Internet Use''. Their study focused on brain function and abnormalities when teenagers have digital fast for certain amount of time. Both agreed that for human's brain and mental health, internet addiction including social media has critical similarities with other types of behavioral addiction, yet there is more study needed to prove this problem as a clinical disorder.

2)Merjin Straathof, Experience designer at ''Just '' and Founder of a campaign ''99daysoffredoom''. The purpose was to understand the motivation and the results of world-renown experiment. Merjin believes that social media has an enormous potential to create a viral content if it is used for its purpose. His experiment with Cornell University became terrifically popular with a snowball effect and they found that people had a strong urge to come back and their emotional condition has been continuously changed during the experiment.

3) Alissa Lusky, Personal Counsellor, MA. LLP. at Wellness Center of College for Creative Studies. Lusky explained their recent cases which are linked to social media addiction either directly or indirectly. She argues that there is not any reactive or proactive approach, therapies nor communities related to social media addiction. She also agreed that neither parents or students are aware of the problem since it aroused in only a few years.

4) Rachel Ehmke, Author & Senior Media Editor at Child Mind Institute ''How Using Social Media Affects Teenagers''. Ehmke was aware of the negative effects of social media addiction, and she believed that people have no idea about the potential impacts of social media interaction.

7) Alissa Lusky, Mother of a girl (15) and a boy (14). The purpose was to understand the perspective of a mother of two children who admits that her daughter is definitely addicted to social media. Lusky has a daughter who is a senior in high school and a son who is junior at the same school. She compared the behaviors of her children and explained her concerns about her daughter's social media addiction problem. During the interview, she was asked to explain her daughter's and son's typical day in the life to create a user journey. As a result of this conversation, Lusky argues that her daughter's mobile phone is her left arm.

Some of the responses from interrelated people and experts were overlapped with the reaction of iGen members. Each response complemented each other and eventually, this study adapted more comprehensive attitude to the problem of social media addiction.

In the US, the average age of children getting their first smartphone is 10 years. iGen is on the verge of the most severe mental health crisis for decades. Social media use makes iGen anxious since they can compare themselves and their values with others whereas disconnection or digital fast also makes them more anxious since they do not know how to live without social media. In other words, this problem puts youth between a rock and a hard place. iGeneration is more in-person, insecure, irreligious, insulated, inclusive and indefinite comparing with other generations.

iGen have an eight second attention span and they are unable to focus for extended amounts of time. In other words, their brain have 'eight-second filter'. 94 % of iGen agreed that the gender doesn't define a person as much as it used to and that changing ideas about genders is allowing more people to be themselves. 'Gender Fluidity' is a new term aroused by this generation's sensitivity and choices, they would not prefer to be stereotyped and they have more independent and liberal decisions about their gender. Moreover, iGen would rather be considered unique and cool than real. Brand Team for Consumer Apps at Google has searched the meaning of coolness among iGen. Beauty, celebrities, music and fashion were some of the topics that they find cool. They believe and rely on brands would change their worlds. Celebrities that are philanthropic and genuine are the coolest.

The biggest problem related with social media addiction is that iGen has been experiencing striking, dramatically behavioral change without having any proactive reclaim or preparation when they first get their smartphones. Tween age -when they first start to own their phones- is the optimal age that could prevent children being an addicted to their smartphones. The aim of Squad is to create a smooth transition period which could be defined as a 'provisional period' when each child could be educated and prepared to use their smart phones and empowered to boost their creativity and social thinking skills by collaboration.

During the design process, eight tweens from the ages between 9 -11 were interviewed to help to identify the design details of the app such as duration, avatars, rules and personalization. Interactive prototype was used to collaborate with tweens and get their unique feedback.

Squad, hopefully will help tweens navigate the transition to social media with greater awareness, and to see social media as a tool for creative, productive ends. Ultimately, it's not about restricting social media use, but about helping young adults find the confidence, balance, and direction they need to make the most of it. Personal characteristics and learning skills will make children successful in their future lives. In order to build up a future with more successful generation, Squad increases self knowledge, skills of learning, people sense and worldliness, communication and openness and goal settings skills.