Pick up the phone

The Studio Dott participation pavilion bridges the gap between online and offline urban participation. The pavilion is a physical installation that is placed at strategic locations throughout a city or municipality. Through the pavilion citizens are consulted about new urban development plans or policy issues the city wants to bring forward. In order to give feedback on the issues or proposals presented by the city, citizens are invited to pick up the phone and answer a number of questions at stake. All replies are recorded and digitally processed for further anonymous pattern analysis supported by linguistic algorithms (for the Flemish - Dutch - spoken language).

During this project, our goal was to create a qualitative design research tool that would allow us to capture 'rich' stakeholder feedback for large populations. Proven methods such as diary studies or cultural probes haven shown their value in various design processes, but they remain very labor intensive and are limited to a small sample of participants. During the creation of the participation pavilion, we explored how 'ready' emerging technologies are in order to support the collection, analysis and reporting of larger amounts of data.

The participation pavilion was designed as a physical touchpoint in the urban space. By focussing on a physical installation our aim was to lower the barrier for citizens to voice their opinions. We focused on creating a system that allows anyone to walk up to, without the need to create an account or figure out which buttons to push. At the same time all presented content exists digitally, which allowed us to run an online discussion forum in parallel with the experiments done. By combining both physical and digital datasets, which reported on the same content, we were able to involve an even larger slice of the population. 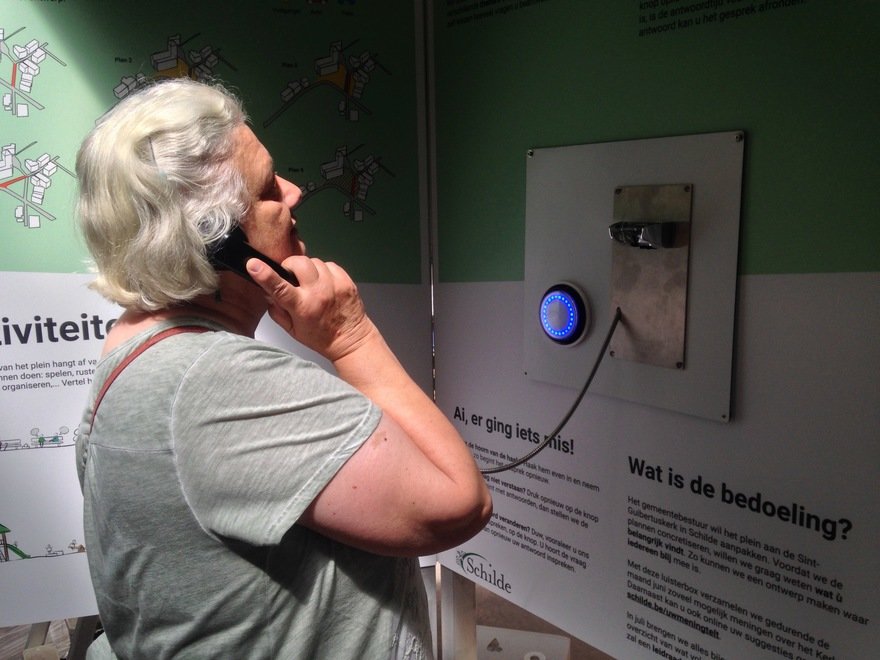 Participation pavilion in use 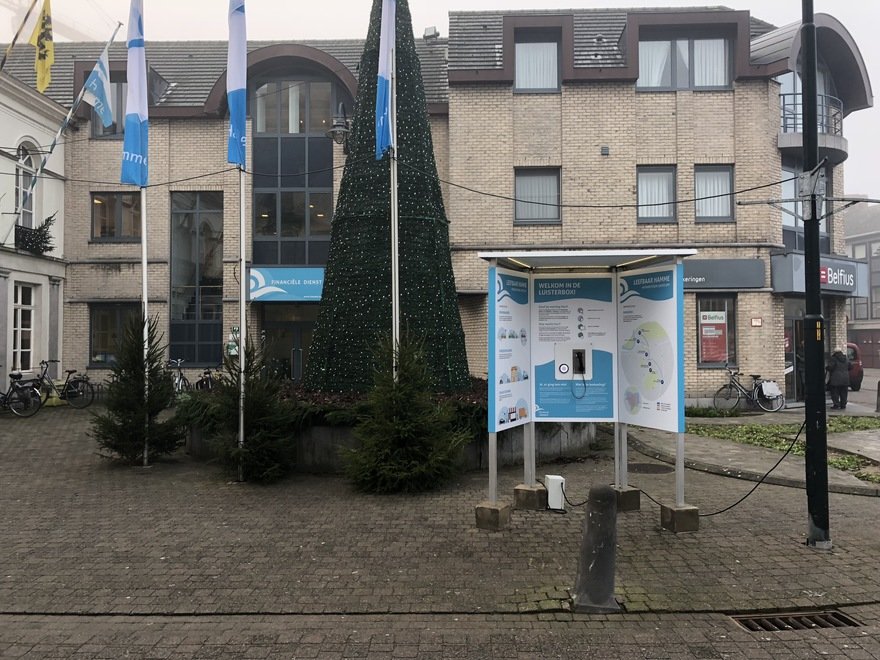 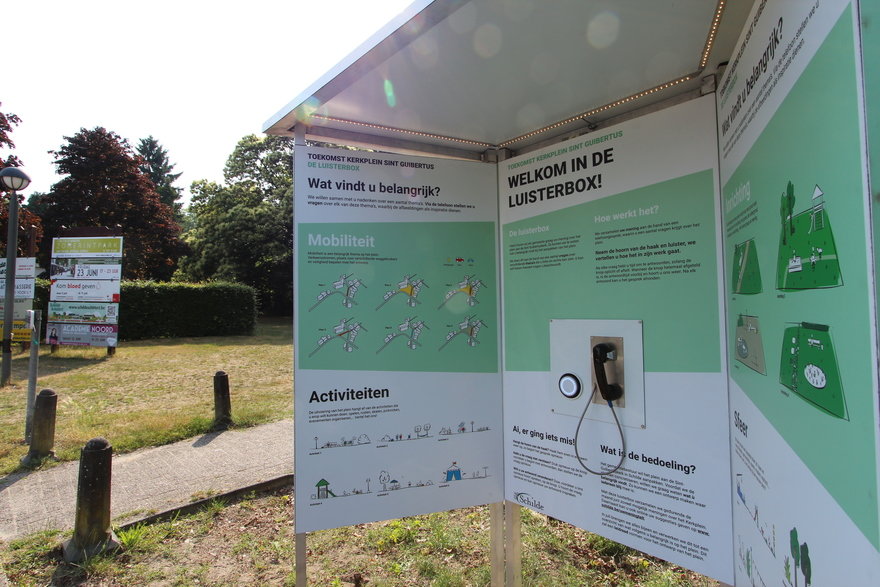 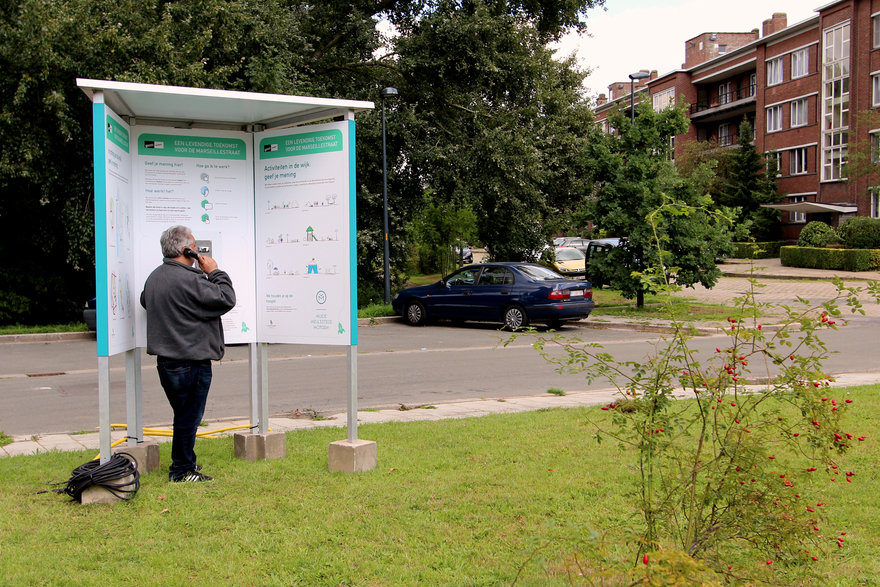 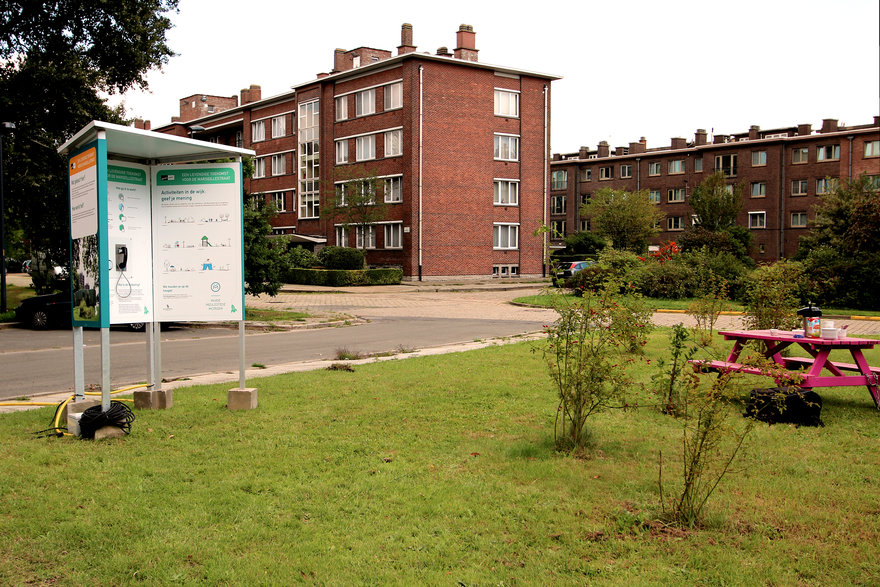 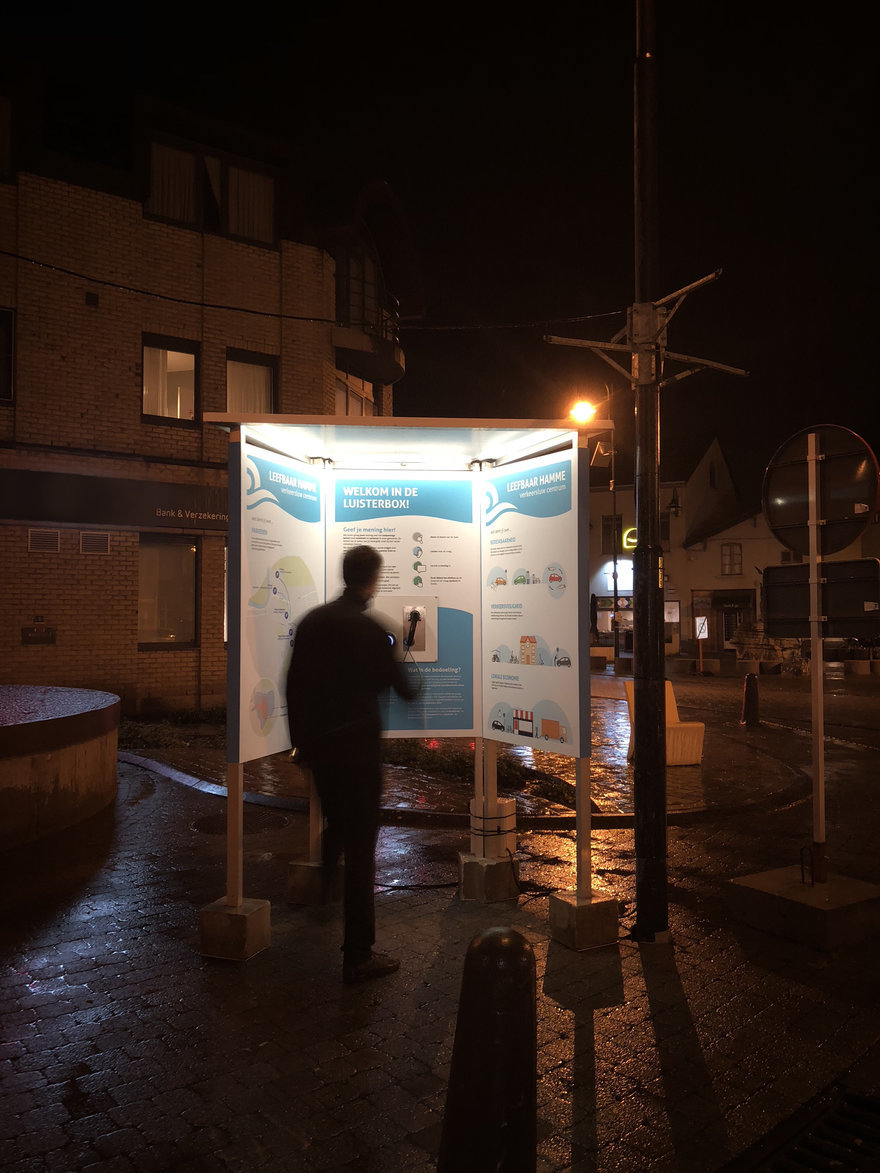 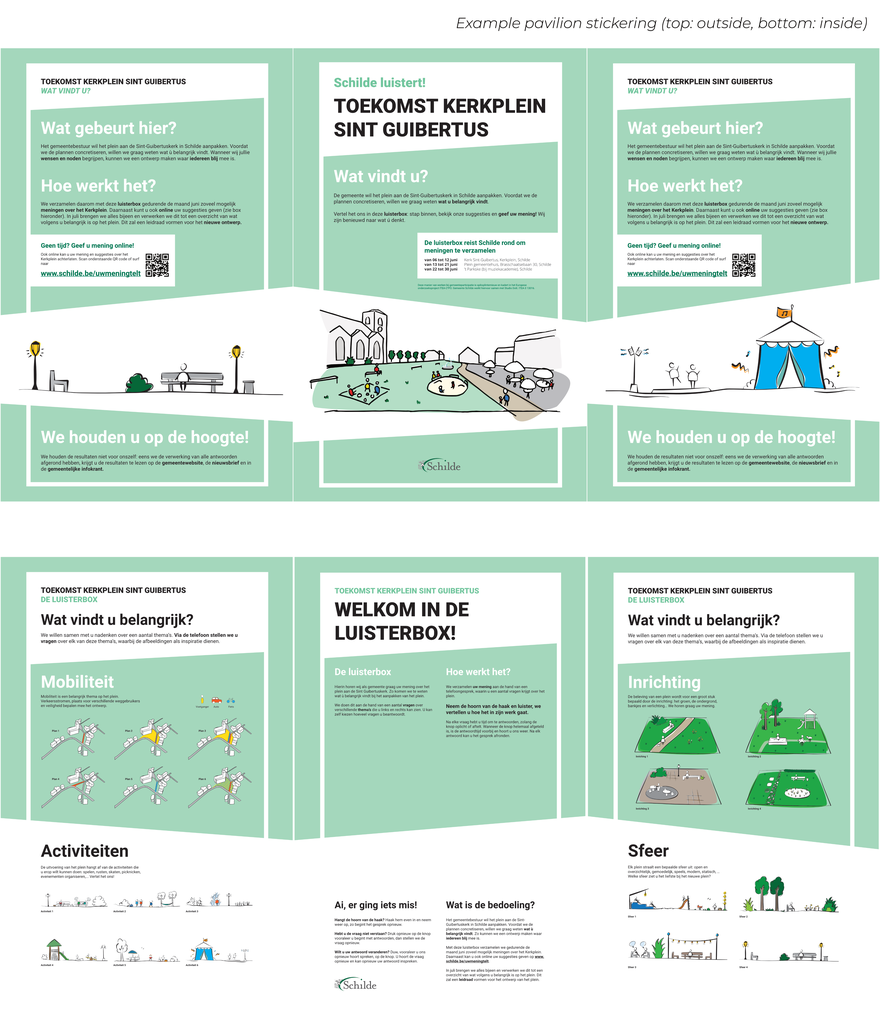 Cities and municipalities are increasingly looking for ways to engage in a constructive dialogue with their citizens. It is, however, not straightforward to reach a large and diverse sample of society, and to be as inclusive as possible during a citizen engagement process.

While several online participation platforms and tools have made their way to the market, our research showed that these new types of participation tools appeal to a specific target audience. Firstly, these tools mainly reach citizens who are comfortable to use a digital platform using either a desktop computer, tablet or phone. Whilst this kind of interaction works well for some, having access to and feeling comfortable using a digital system doesn't work for others. Secondly, these existing digital participation tools mostly rely on text-based input. Either this is used to collect opinions (questionnaires), ideas (post & vote) or conversations (discussion boards). Using text-based input can be interesting, but by having to type an answer, opinions are more orchestrated, less nuanced and not spontaneous. When endeavoring on an explorative design exercise, having nuanced "rich" responses to a proposition is usually more interesting. Lastly, a challenge for cities and municipalities is to get people to engage and participate in any kind of participatory exercise. Traditional participation projects, where people have to attend a meeting or workshop in a set time and place in order to give feedback, tend to reach a white middle-class audience, often leaving out several other voices of the social tissue.

These observations resulted in the conceptual definition and the first prototype of a 'participation pavilion'. A physical installation which can be used by organizations, cities and municipalities who want to involve a large, diverse mix of citizens in urban participation projects.

The participation pavilion presents discussion topics using annotated visuals on printed weatherproof panels. When a participant picks up the phone handset, the booth starts talking through the handset. Randomly, it will ask a question about one of the topics mentioned on the panels. Citizens then get a set amount of time to answer by speaking into the handset (similar to a voicemail system). To answer another question, they push the big button in front of them. All recorded data is sent to an online server, where the voice data is anonymously processed. First of all, a speech to text algorithm is used to convert the recordings to text. Eventually, these text data are fed into linguistic data analysis algorithms which eventually allows our designers to distill insights.

In the first quarter of 2018, we concluded 3 trials with the participation pavilion in an urban context. We were able to test the system in a large city as well as 2 smaller towns. Also, we experimented with leaving the installation stationary versus moving its location several times throughout the trial period. This allowed us to adjust the location of the pavilion based on the population we had reached so far. For example, in case we would miss the input of seniors, the pavilion could be set up near a nursing home.

In collaboration with the municipality of Schilde, a small Belgian town with roughly 20,000 inhabitants, the participation pavilion travelled between 3 different locations during a period of 3 weeks. The participation process was set up to engage citizens in the redefinition of a central city square. The themes focused on mobility, infrastructure, feeling and activities. In total over 650 answers were collected, of which 532 were usable for analysis.

Together with the city of Ghent (Belgium), an urban participation process was set up in one specific city disctrict (Muide-Meulestede, 6192 inhabitants). This neighborhood includes a vast social housing site whose inhabitants have proved to be a difficult target audience to reach. In this case, the participation pavilion was used alongside a physical 'meeting point' where social housing inhabitants and other citizens could sit down and talk with a community worker. We collected 472 answers of which 306 were usable for analysis over a period of 3 weeks (stationary location).

The municipality of Hamme is a smaller town in Belgium (25,000 inhabitants) that wanted to completely overhaul the parking and mobility situation in their urban center. In order to collect concerns and get feedback on possible solutions to citizens, the participation pavilion was used. We carefully combined well-formulated questions with purposefully designed visualizations of the new proposals. Over a period of 3 weeks 162 answers were collected of which 104 were usable (stationary location).

How the pavilion works

The pavilion consists of three panels with replaceable stickering, an illuminated roof, a phone handset and one large push button with an illuminated LED ring. The phone handset is hooked up to an embedded computing board, which is connected to the internet using a mobile data connection. Using the linked backend, the system can be updated on the fly - meaning that questions can be added, removed or changed without an on-site intervention.

In order to set up the pavilion, several 'topics' are defined based on the project context (e.g. mobility, infrastructure, feeling, …). For each topic, several questions are introduced in collaboration with the city or municipality. In our trials, we defined between 15 and 25 questions divided over 4 to 5 themes. The questions are asked in a randomized order to ensure that all questions get answered over time. All questions are recorded as audio files and supporting visual material is either collected and adapted or designed.

Interacting with the pavilion had to be as straightforward as possible. The combination of an illuminated RGB LED ring and a large push button allowed us to communicate different system states in an easy to understand way:

- White ring: the system is idle and invites a next citizen

- Blue ring: the system is speaking

- Green ring counting down: the system is recording and will end once the ring is 'empty'

The first instruction a participant hears after picking up the handset, is "push the button to start". This step was included to reduce accidental recordings and provide the participant with a little bit of time to feel at ease. After a question was answered, the system asked to push the button again to answer a next question. If the participants didn't want to, they could just hang up implying that each participant could answer as many (or as little) questions as s/he liked.

Using a backend (browser based) dashboard interface, all interactions with the physical booth could be followed up. During each trial, we were able to check whether the system was still online and in case problems occurred, the system could be reset or settings changed.

From a research point of view, automated analysis of large collections of audio recordings was the most critical element for us. In collaboration with a data processing partner, several speech to text tools were evaluated. In order to compare the results, we manually transcribed and analyzed all gathered data as a reference.

The most interesting linguistic analysis type was the n-gram analysis, which is comparable to a word count - but looks for phrases instead of words.

We decided to leave the system 'on' 24 hours a day, 7 days a week. This caused some initial concerns, since the municipalities and cities were wary of vandalism. During all 3 trials, there were no acts of vandalism.

The system was built as a prototype, which in the end still required some manual effort during setup, use and analysis. We did however show that there is value in constructing such a system, but it would require additional hard- and software design and build efforts.

We designed the whole system to be as weather proof as possible, using a welded aluminum base construction and tamper proof screws. We only had two issues where some weather damage (heavy winds) caused for a handful of onsite interventions. Also, a few power cuts caused for the system to reboot badly which needed an onsite intervention to manually reset the hardware.

During the analysis process, we had issues with local Flemish-Dutch dialects. The speech to text algorithms often could not recognize the spoken words or were not able to create understandable sentences. They did, however, work rather well for short answers or limited word responses. In our reporting we always used the manually transcribed datasets, as they did produce more reliable results.

During the design, we set out to create an inclusive citizen participation installation - primarily taking older generations into account. What we did not expect is that, besides appealing to seniors, we were able to reach younger generations as well (children aged 6 to 10). Our content was not attuned to this target audience, but the interaction design worked very well for this group. This was confirmed by the trial in the city of Ghent, where we managed to engage a 'difficult' social group in urban participation.

The Studio Dott participation pavilion was designed and developed as part of the European ITEA 3 13016 C³PO : Collaborative City Co-design PlatfOrm project. Its development was financially supported by the Flemish government (VLAIO-IWT 140146).