What most of us regards as slums and shelters, nearly a billion people worldwide call their home. Slum communities are especially endangered in case of fires due to narrow set up, light housing materials, lack of water supplies and the use of real fire indoor. A small fire that gets out of control can literally leave hundreds or even thousands homeless before the nearby fire brigade has a chance to respond.

The Malaika concept is a reaction to extensive research and insights gained from on-site visits to fire brigades and slum communities in South Africa and Kenya.

Malaika provides a product, a service and a sustainable business model that empowers slum communities and the women responsible for creating homes and keeping their children safe there. Malaika provides functions of a smoke detector, access alarm and a panic alarm that will help make even the simplest of homes and communities safer. 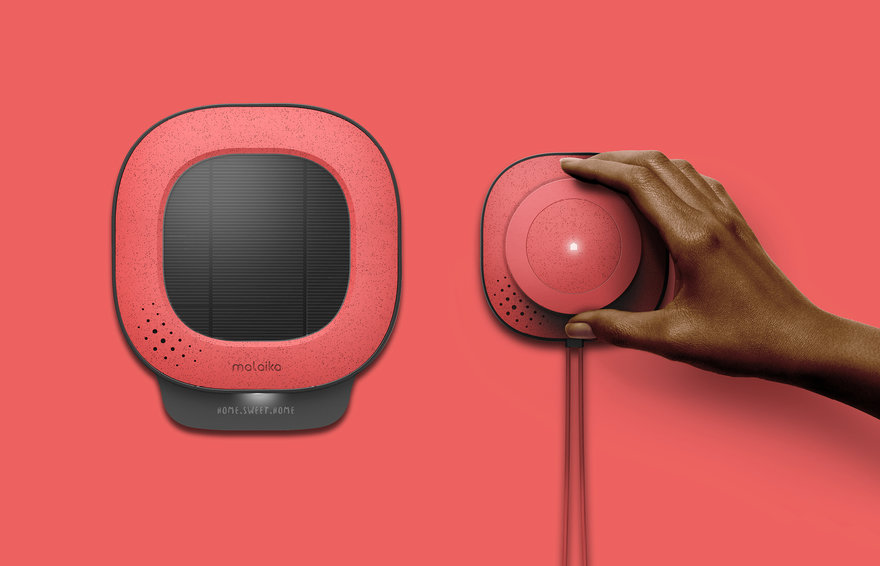 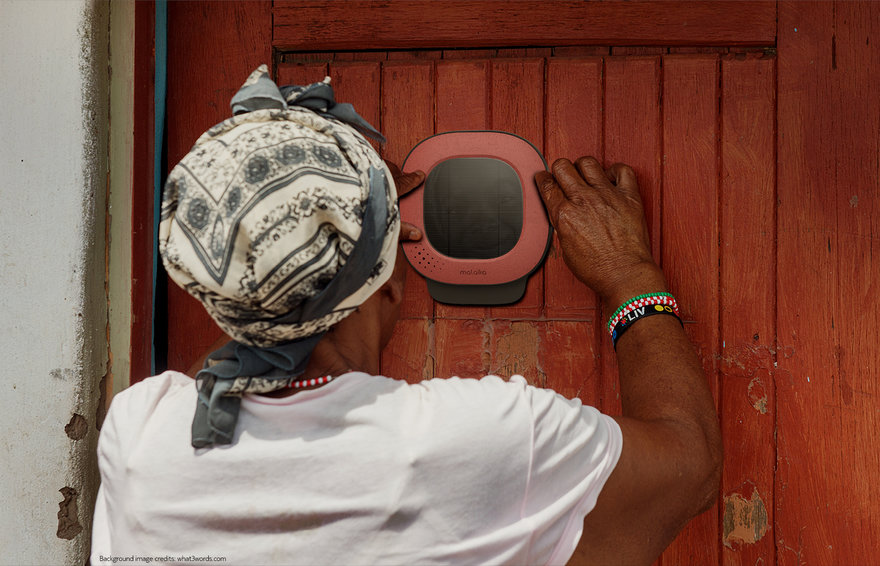 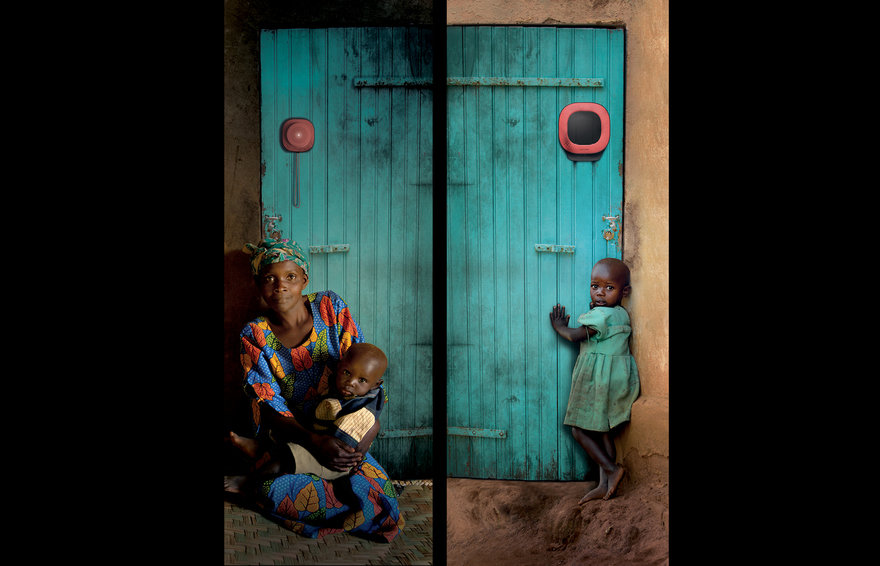 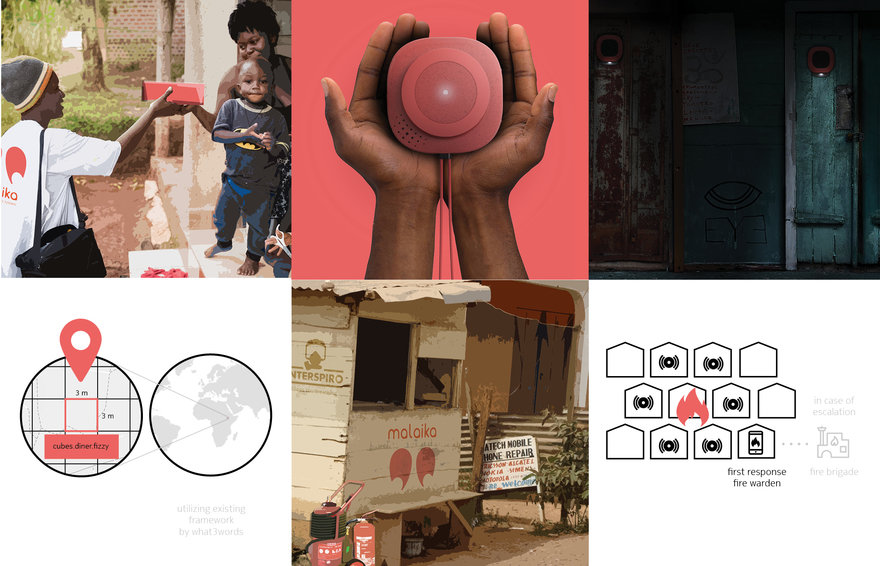 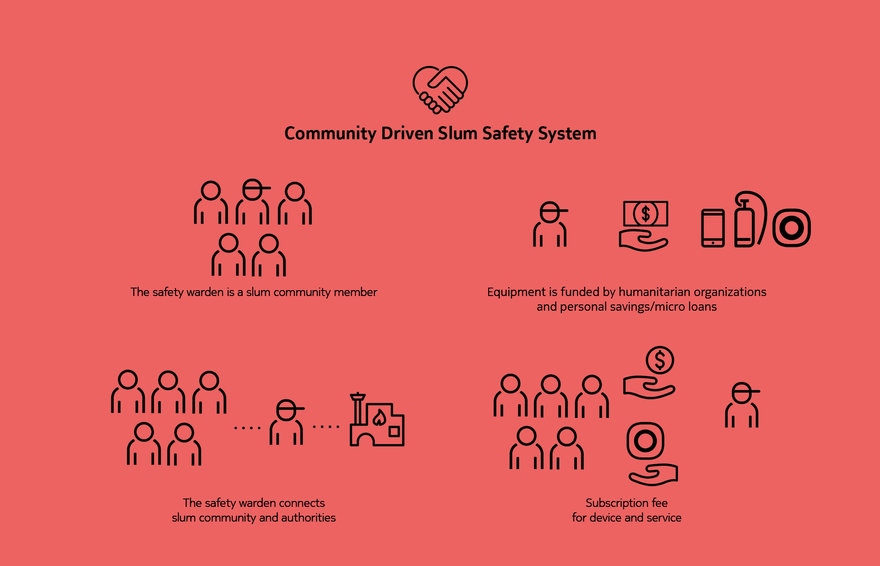 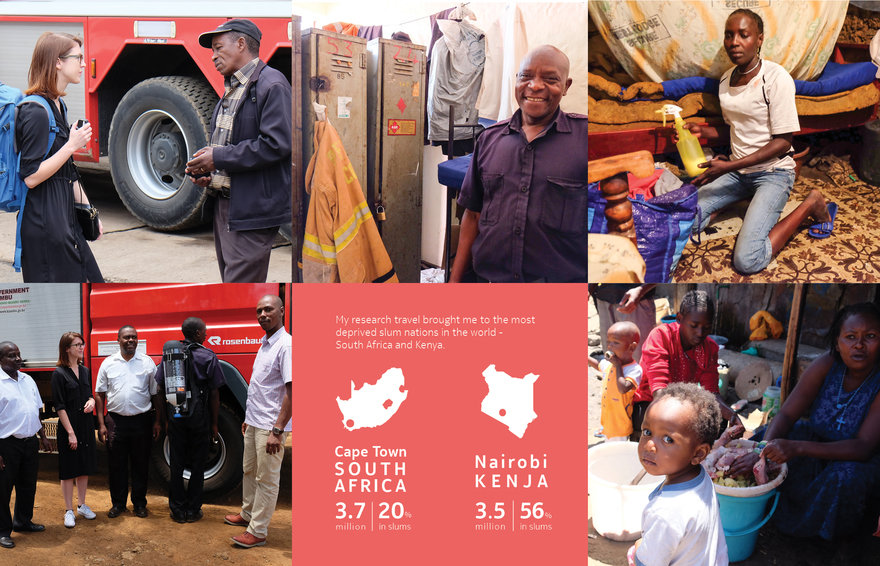 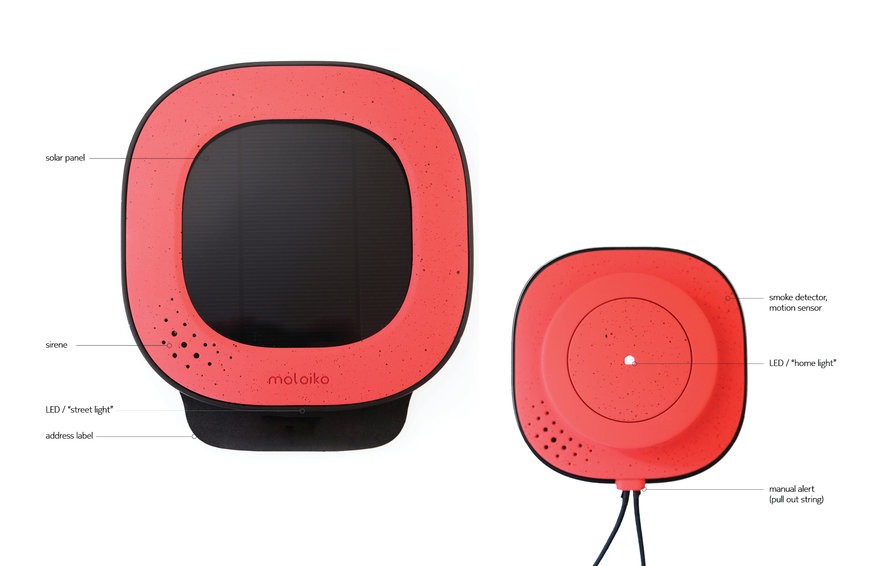 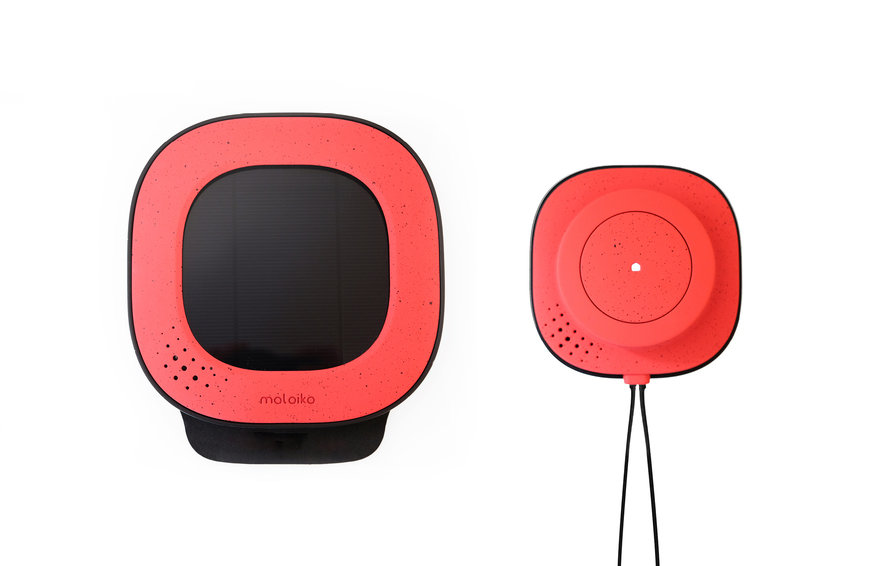 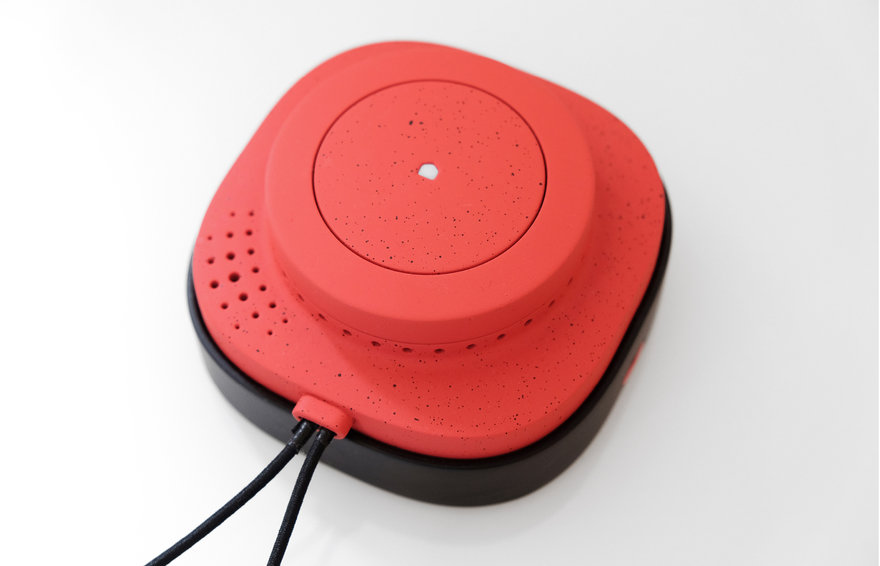 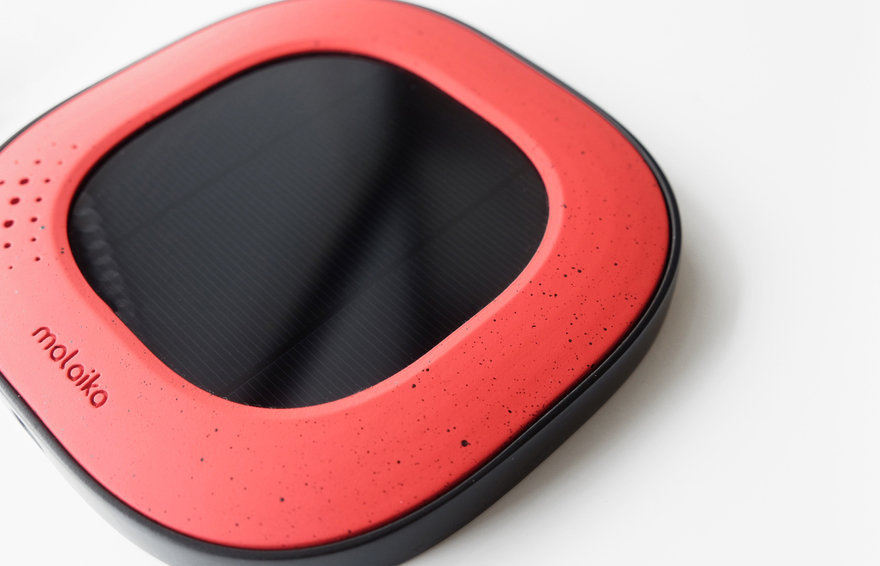 Since this project started in collaboration with Interspiro, a Swedish international manufacturer of fire fighter equipment, the initial focus was to explore the development of low cost firefighting equipment (self-contained breathing apparatus) for fire brigades in emerging countries. During research trips to South Africa and Kenya, with multiple interviews with stakeholders and participatory observations at both fire brigade and slum communities, it became clear that the project had started with the wrong hypothesis. The root to the biggest problems in fire safety services in these developing countries became obvious - and it was not the equipment level of the fire fighters, which in some cases were state of the art due to donations.

Even if slum communities were built with fire resistant material and cooking was not done using real fire indoor and the fire brigades were located close by, the alleyways are still too narrow for any fire fighting vehicle to enter. Since there are no official addresses in these communities and people are living off the grid, first responders in general are unable to navigate and find individuals even if they could enter.

During visits in the slum communities a feeling of abandonees and to some extend suspicion towards official authorities were noticed, this due to a lack of support, help and service throughout the years, caused by major societal and urban logistical challenges.

Because of these valuable insights a new design direction was set for the project, focusing on empowering community members to respond to dangers themselves.

Malaika is designed as a system that provides a product, a service and a business model that goes hand in hand in order to create and offer multiple safety features for the most vulnerable members of the slum community. Malaika functions as a smoke detector in case of a fire, it can easily be transformed into an access alarm that alerts in case someone is breaking in at night and it can also function as a panic alarm if an assault should occur in the home. The product and the safety service, is bought through a low-price monthly subscription supervised by a local 'safety warden'. This warden will be a selected member from the community who will be responsible for the set-up up and maintenance of the system. The warden will also educate the community on safety procedures and keep a good relationship with the local authorities. In connection with the installation and mounting of the Malaika alarm the warden assigns a `3-word address` to the product and the home. This will enable the warden to locate the origin of an alarm and come to help and even contact the authorities if first responders are needed. The 3-word-address system is an existing framework that allows to localize and name every 3 by 3 metre spot on earth in a more human-centred way than abstract GPS coordinates. Malaika has a designated address tag where this unique 3-word address can be written, thereby showing the location and "street number" of the home.

The design of Malaika was influenced by a number of factors like cost efficiency in production, ruggedness in order to withstand rough environments and potential vandalism, at the same time as it aesthetically should be simple, harmonious and showcase the contribution of the household to the safety of the neighbourhood.

The alarm consists of two physical parts. One part is mounted on the inside of the home, containing the smoke detector and alarm components, the interface dial and the panic alarm strap. The other larger part is mounted on the outside. The two parts are connected with a wire going through a small hole in the surface where they are mounted, either a wall close to the door or the door itself, depending on the materials used for the home.

The outside part has a solar cell in the front that powers the system. As an additional feature the outside part is equipped with a small LED that light up after dark and bring "street light" and the feeling of safety into the otherwise pitch dark alleyways, and simultaneously light up the 3-word address tag below it.

The interface dial on the inside part can be used for a number of interactions, like snoozing the alarm for up to 15 minutes in case the household need to cook over open fire. In case a fire gets out of hand while cooking and the alarm has been snoozed, it can still be activated by pulling the strap for the panic alarm.

The collaborating industry partner in this project was the Swedish company Interspiro (http://www.interspiro.com). Today Interspiro supplies respiratory protection for professionals within firefighting, diving and work in hazardous environments all around the world. The brand of Interspiro is however unknown outside of these fields and the company's presence on the African market is presently fairly humble.

Benefits for the cooperation partner

After Interspiro helped organising the field study trips to Africa, when it was realised that the project's design direction had to change from focusing on low cost equipment for fire fighters to helping and empowering members of the slum communities, Interspiro was directly informed and presented with the facts encountered. The arguments that helped persuade Interspiro to agree with the change of focus, was the aspiration of showing that Interspiro could be associated with fire safety 'were it really matters', even outside of their usual business-to-business domain. Interspiro also agreed that this resonated well with their own mission statement which is "Fighting every fire in the world", at the same time as the new focus was well in line with the traditional Swedish values of social responsibility and addressing inequality.

By supporting the Malaika concept Interspiro would develop its reputation and market presence from "empowering professionals to help people", to also "empowering people to help themselves". Interspiro would thereby be active as a brand in scenarios and environments where their usual professional users today feel frustration because of limited possibilities to act and help due to deep grown political, societal and urban logistical challenges.

A simple fire can take away the basis of existence of a person or family, and in a worst case scenario even take lives. Unfortunately there are more and other dangers in the slum than just fast paced fires. Crime and violence are other major concerns that has to be taken into consideration when talking about increasing safety in these extreme settings. In emerging countries, where first responders due to limitations in budgets, education or access, already struggle to provide the most basic of services, the empowerment of slum communities to respond to fires and other safety hazards as quickly as possible by themselves, could serve as a vital part in defusing an already tense and unstable situation. By having safety wardens represented within the community, who will be in contact with the authorities and first responders, the relationship between the parties would be strengthened and the slum community could gain its own voice in society.

Malaika could not only help to protect and keep the most vulnerable members of the community safe, it could also provide homes and families with something as simple as an address, and thereby giving dignity to the people living there and building the self-esteem of an entire community from within.

Malaika will not be able to change major injustices in society by itself, but it can be one important stepping stone towards bringing divided societies closer together and establish a culture of empowerment, increased safety and more trust in slum communities.