An Origami Instruction with Coded Language.

Origami is enjoyed by everyone, no matter their gender or age. Since the 6th Century, however, the origami technique has never changed. Traditional Origami gives people descriptive instructions, which is really easy to follow. People who fold origami can easily predict what it will be because of detailed guide. This could make origami boring and block the curiosity.

'Is there a new way of paper folding that stimulates curiosity?'

'What if people fold the origami without knowing the result?'

Those are the main questions of this project.

'Coded Origami' introduces a new way of folding a paper through coded language. There are two components, Origami Paper and Coded Template. You may not know how the paper will turn to be because it is encoded.

'Coded Origami' can stimulate your curiosity through the decoding process. You will be surprised by an unexpected beauty. This concept is designed for people who wants a new experience through folding a paper. 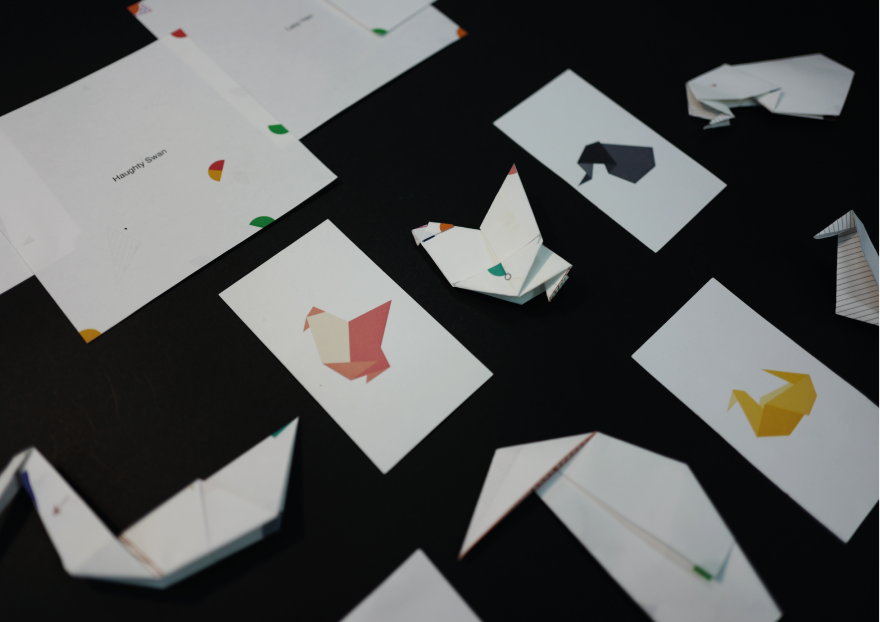 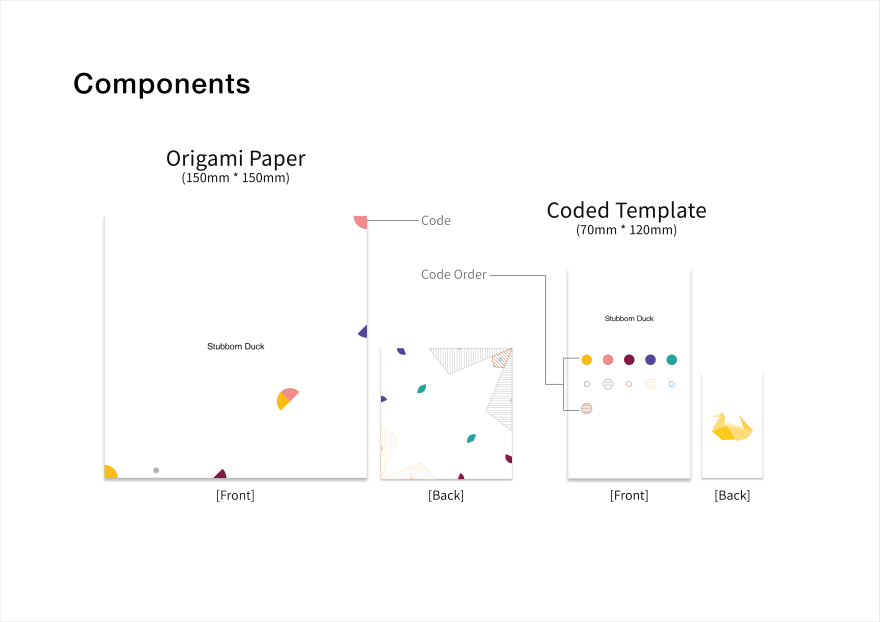 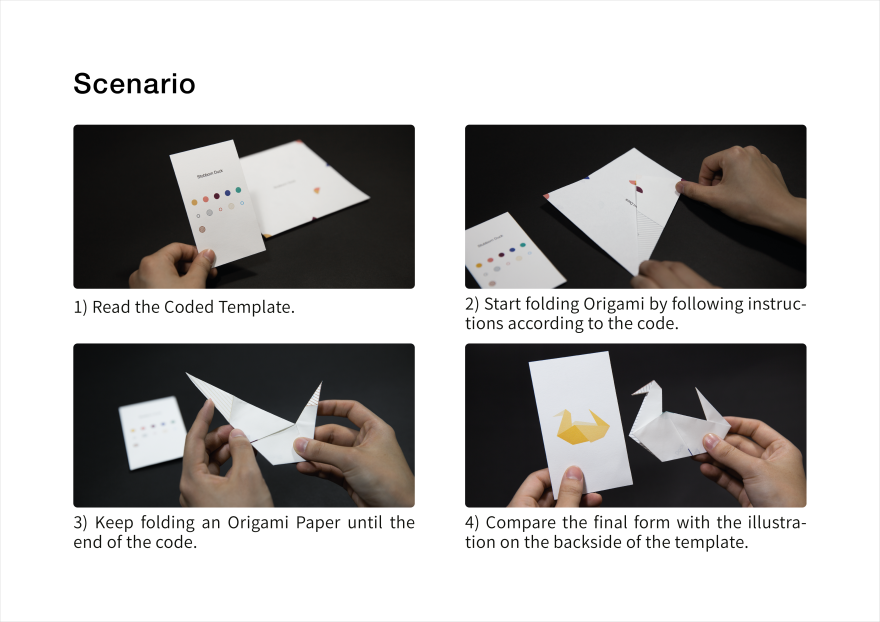 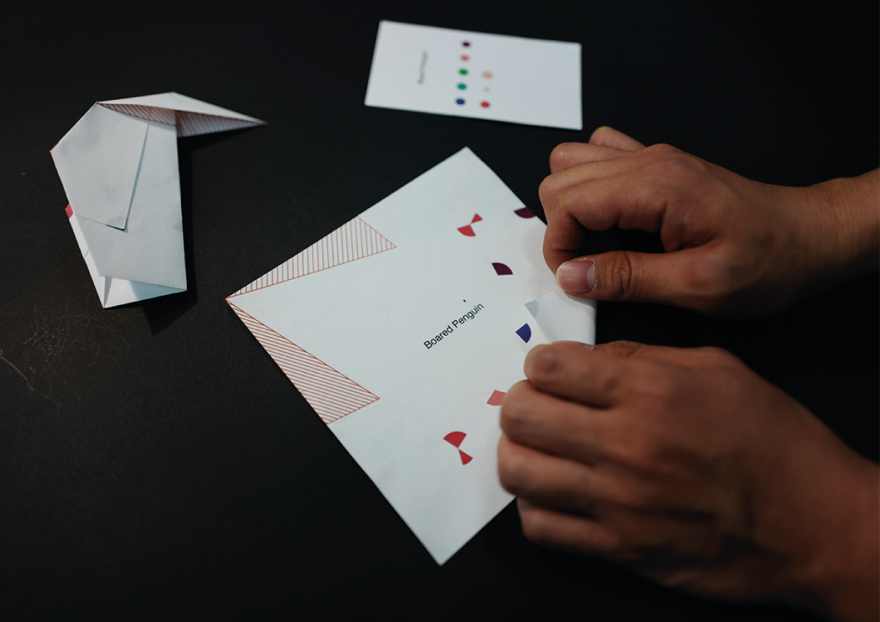 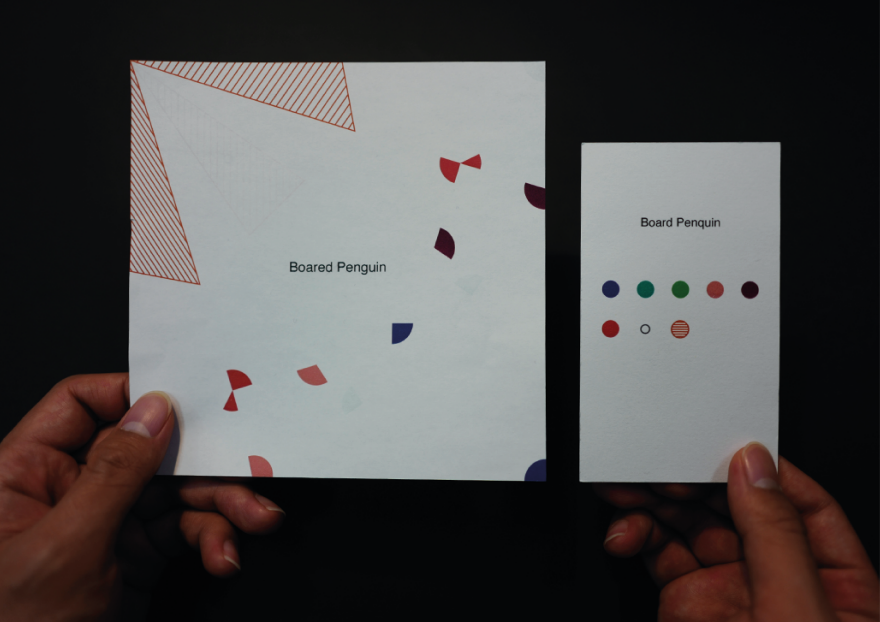 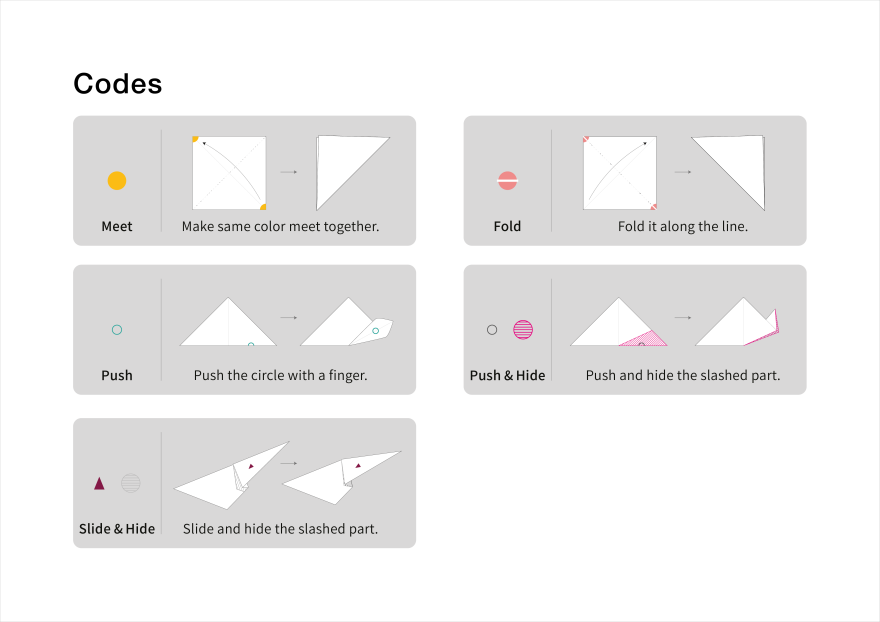 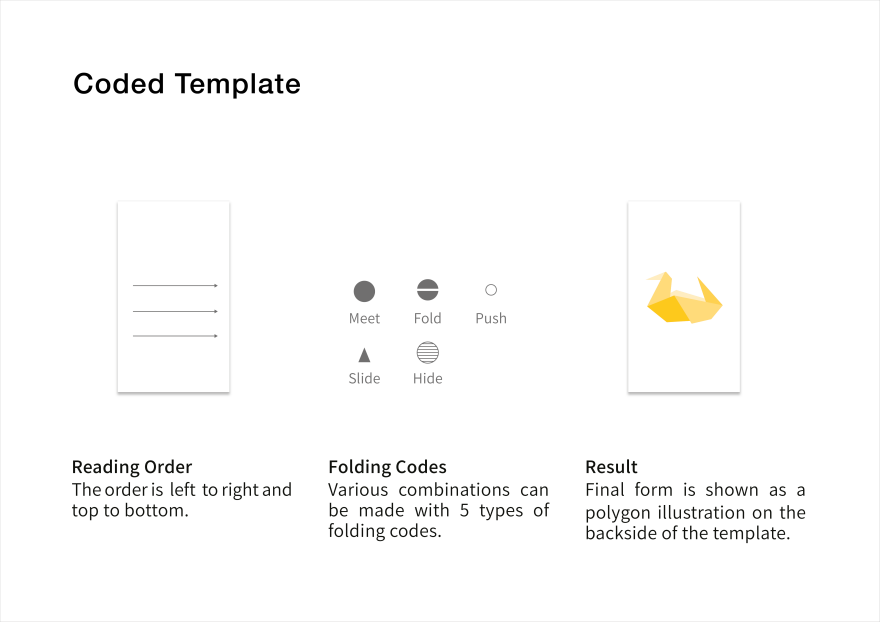 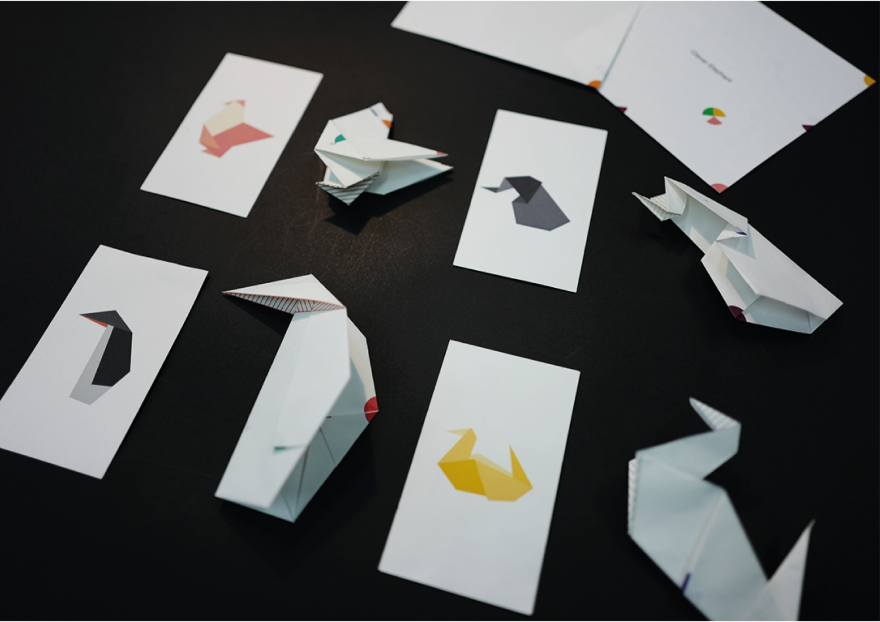 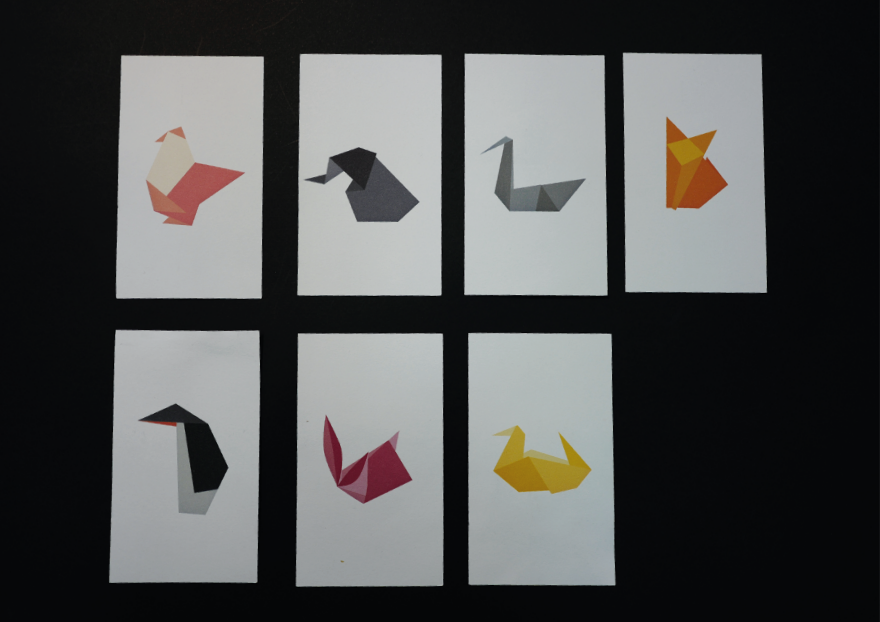 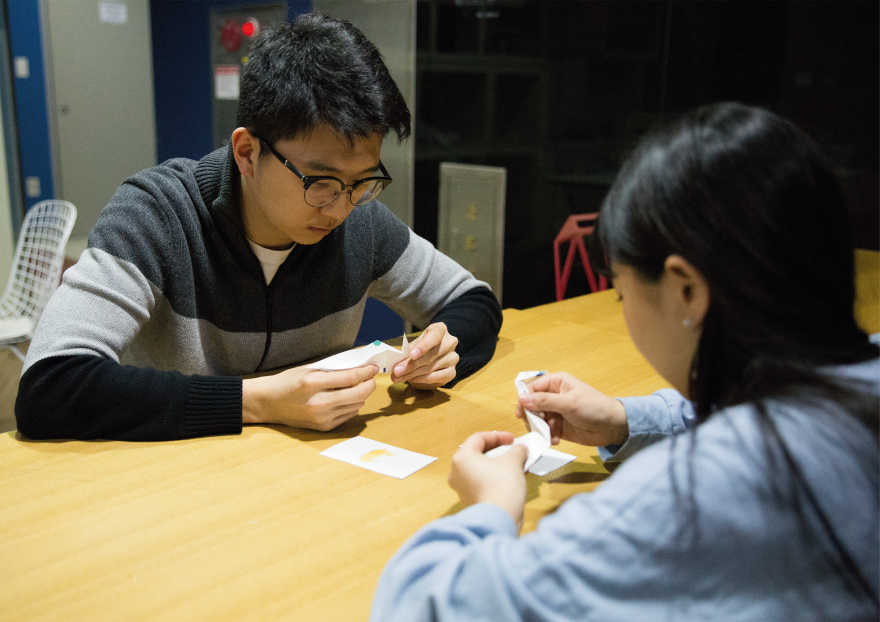 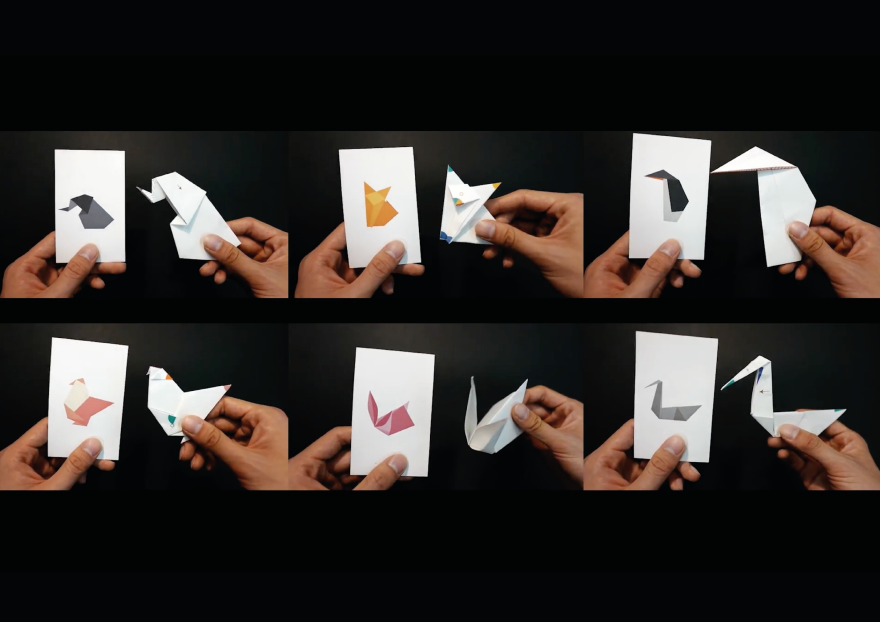 The instruction consists of two parts. One is the Origami Paper, printed with codes, and the other is the Coded Template which shows the code order must be followed. This instruction is paired with a nickname of an animal. When the people reads and follows the code, the Origami Paper turns into its final form. By comparing the folded paper and the illustration on the backside of the template, they can see weather it is correctly made or not.

There are five representative methods for newly designed origami. Those are Meet, Fold, Push, Push & Hide and Slide & Hide. The folding process with newly designed methods make people feel like piecing a puzzle.

2. Start folding origami by following instructions according to the code.

3. Keep folding an Origami Paper until the end of the code.

4. Compare the final form with the illustration on the backside of the template.

"Explore with your curiosity!"