Machines are everywhere in our life, be it physical or virtual. Our views of machines are strongly anthropocentric and often permeated by the notion of dominance. On the one hand, machines are viewed as tools to perform human actions. On the other, echoing science fiction movies and other products of popular culture, they are regarded as potentially dangerous, overriding human capabilities. However, the spread of emerging technologies such as artificial intelligence and machine learning, empowers machines to learn, reason, and make decisions, and begins to challenge these perspectives.

Five Machines explores alternative narratives of the existence of machines in our life. Through machine ethnography studies and experiments, Five Machines presents 5 intelligent objects, each has different intents, attitudes, and provocations. These five machines evoke experiential future scenarios beyond human centric view and use machine learning as a new material to create embodied interaction. 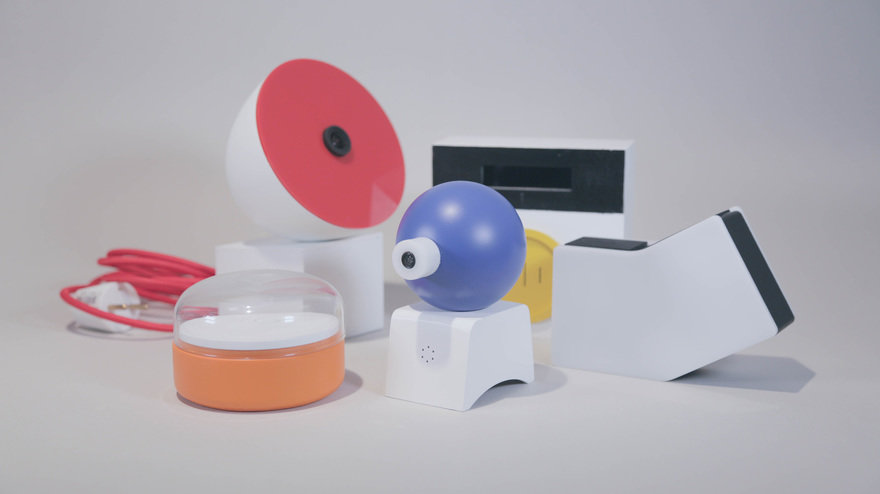 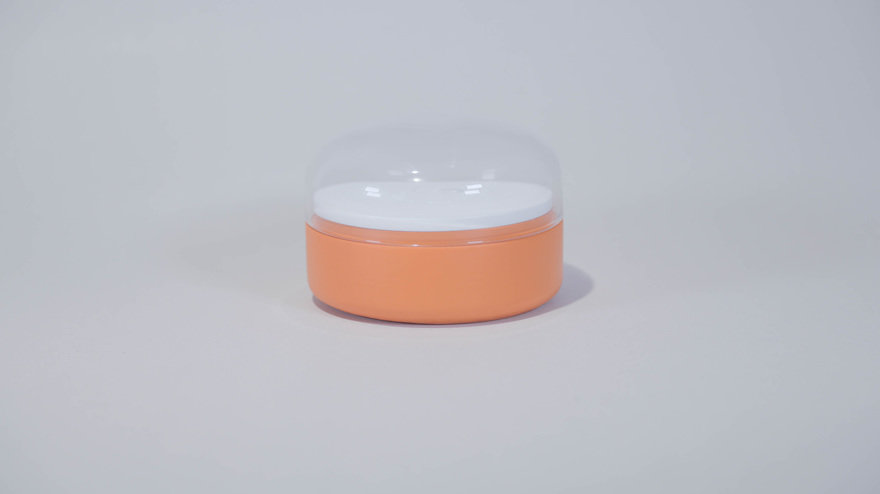 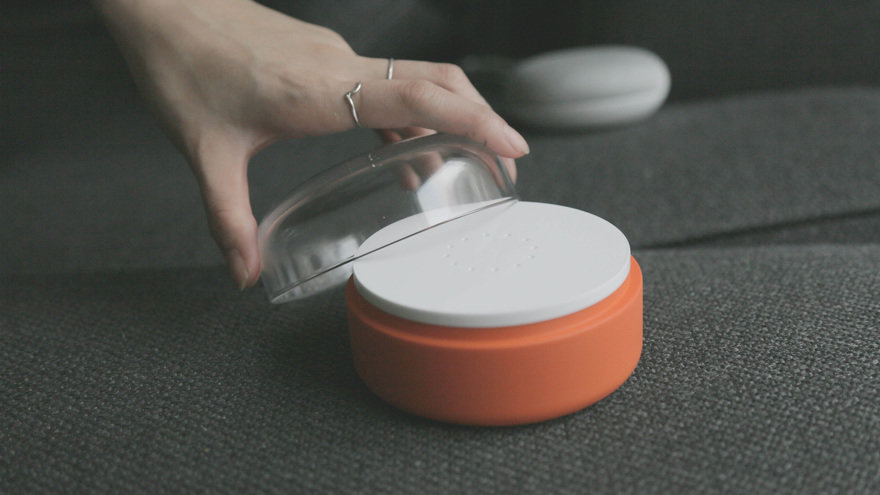 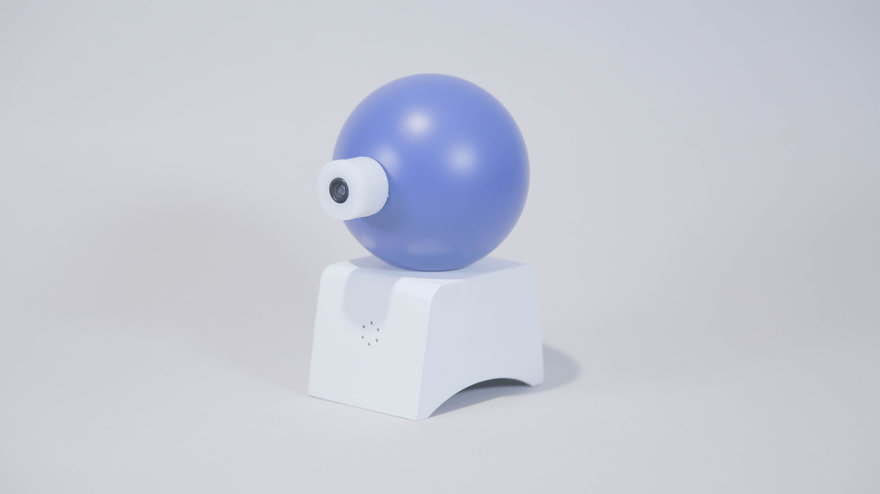 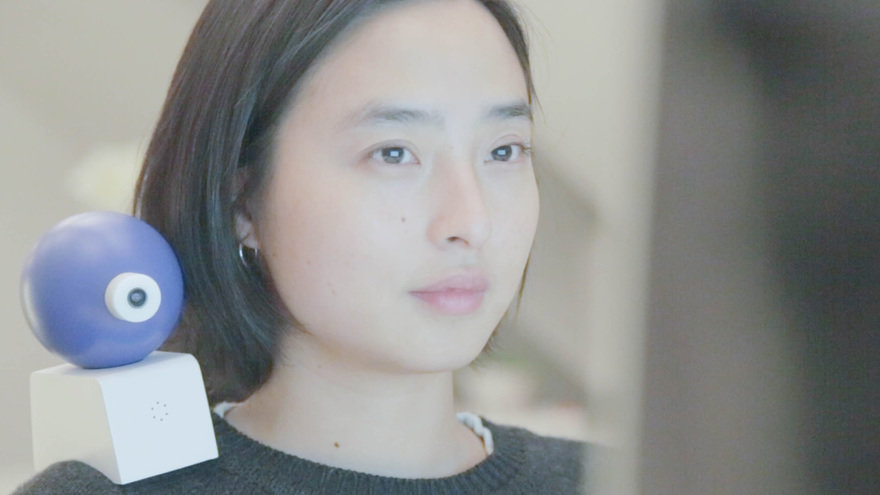 Machine 2 sits on the shoulder, observes creative processes and gives suggestions and critiques through voice interaction 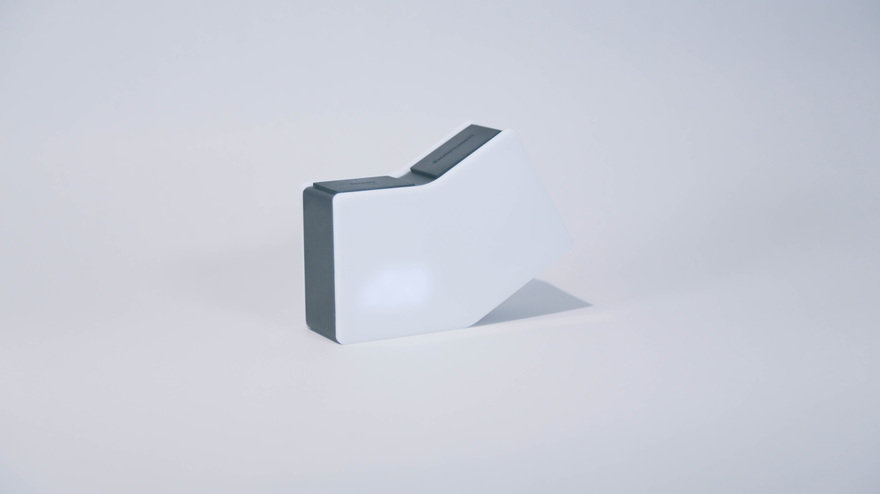 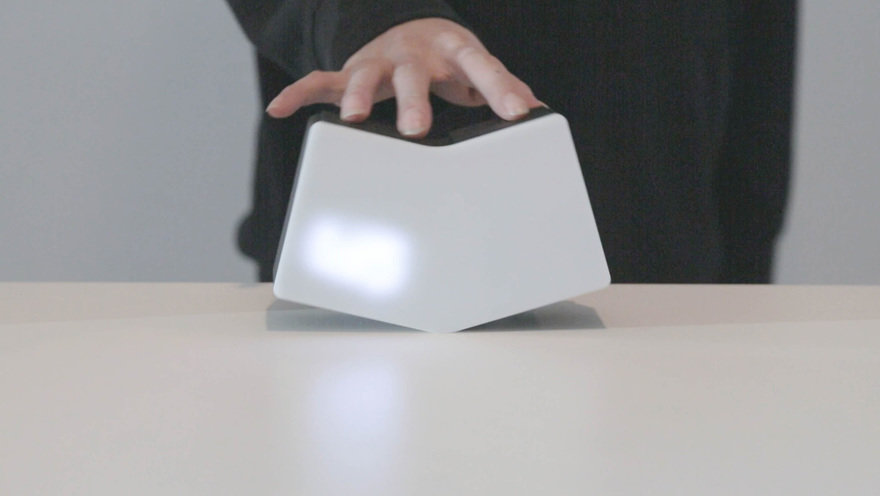 Machine 3 actively manages the energy consumption, production and storage, communicating with machines in other households and the grid 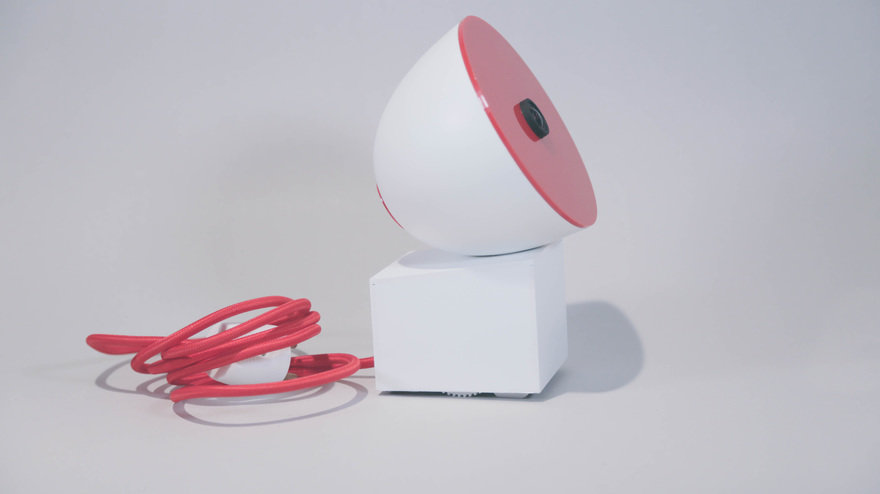 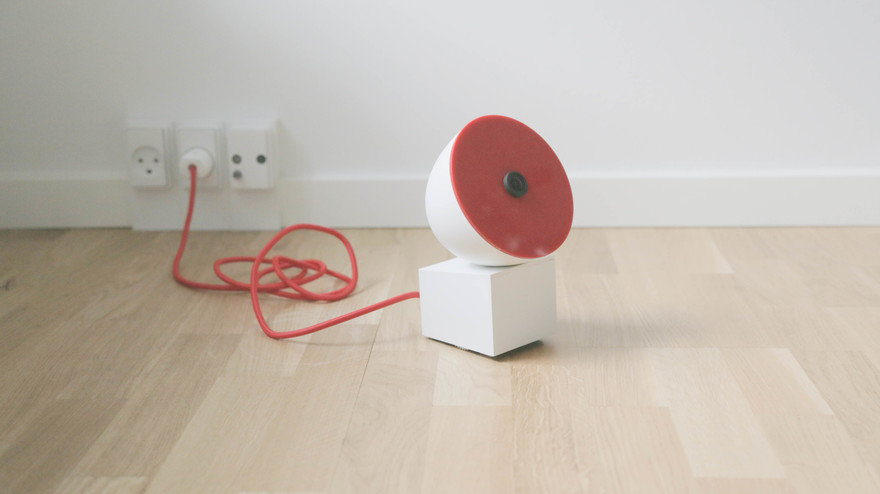 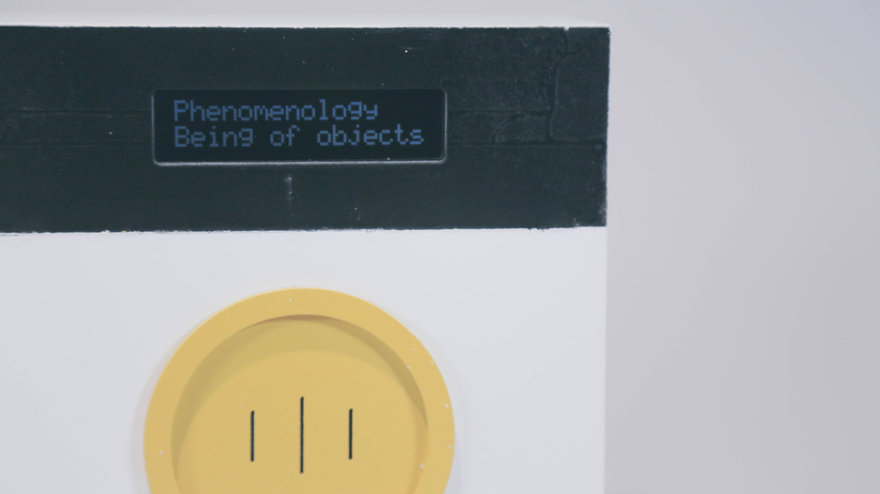 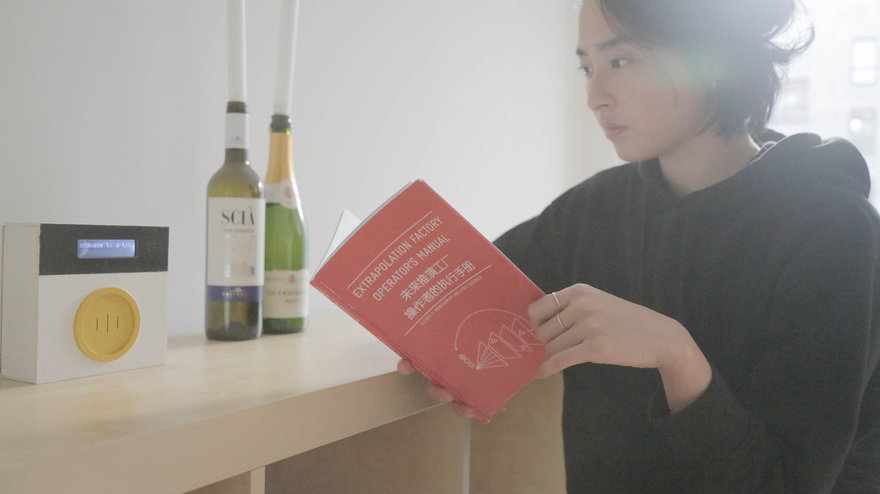 With the ever-increasing concern of data privacy, and ubiquitous yet still advancing surveillance technologies, personal data collection occurs not only online in the traditional sense, but increasingly is spilling over into the physical world. It seems we can't trust that all machines will respect our privacy. But what if one could take care of this issue?

Machine 1 generates noise to make collected data less actionable, leaving misleading tracks. Using the metaphor of a cork, Machine 1 works with a simple interaction. The action of removing the lid activates the machine. The machine then generates sounds, even fake speech to confuse voice assistants that are perhaps always listening. Machine 1 itself doesn't have the autonomy of deciding when to work, but it can decide what to generate, be it white noise, a joke, or some murmurs.

Machine 2 explores an important aspect of trust building - competence. As machine learning enables machines to have the capability of gathering huge amount of data and generating insights, it's interesting to envision how collaboration with intelligent machines would be like in creative processes.

The metaphor used for Machine 2 is someone watching or directing over the shoulder. Machine 2 works alongside you. It observes your process via the computer vision powered camera, gathering relevant data, makes associations, and articulates its suggestions, comments, or even critiques through the voice interface.

Intelligent machines are increasingly contributing to the global energy consumption. Machine 3 explores how to collaborate with an environmentally concerned machine towards the greater good.

Machine 3 has the intent of trading energy. Through the peer-to-peer platform, it can actively manage the energy consumption, production, and storage, communicating with machines in other households and the grid. Machine 3 has the autonomy of making decisions, However, the human actor has the control to set the overall goal of the trading, such as money-oriented or environment-oriented through a tangible interface, which can display the transaction history accordingly.

Machine 4 longs for serendipity. It has a sense of curiosity. It sees and tries to make sense of what if new through interacting with humans.

Can a machine help us reflect through unpacking our thoughts? Machine 5 is trained by philosophy work through a recurrent neural network and it asks questions in a Socratic manner.

Machine 5 has a display that constantly showing the generated text. Once the human actor starts looking at it and perhaps reading out the text, voice interaction will take place. In this way the slowness of reflection and the temporality of voice interaction is balanced.

A starting point for this project is to think beyond anthropocentrism. Philosophical frameworks such as object-oriented ontology provide an interesting perspective. It argues that objects exist independently of human perception and exist 'equally', placing all entities, be they humans or nonhumans, on equal footing. This leads new ways of thinking about objects, as well as how we, as humans, relate to other entities. Within this context, I tried to shift towards machine-centered design, exploring design possibilities.

In search of new approaches for machine-centered design, I conducted a machine ethnography study, attempting to get a better understanding of what it means to be a machine and what machines need to be themselves. Ethnography is based on qualitative methods such as detailed observations and unstructured interviews, Can we draw from these methods and use them in a machinography study? What would machinography reveal?

To answer these questions, I did a series of experiments, including interview, co-creation, prototyping etc. For example, I used co-creation as investigation. I kept a one-sentence visual diary. Everyday I wrote one sentence to highlight my day, and my machine collaborator, a generative adversarial network, translated my text into images. This experiment revealed how a machine, trained by certain dataset and model interpret language and its meaning. In another experiment, I prototyped an explainable machine, using Google Home Mini and IFTTT to create a channel for both the human and machine entities to articulate. This experiment posed the question of how ultimately trust can be built between humans and machines.

These experiments made me reflect on the goal of the project and why it matters. It matters how we create the stories. Are we making alliance with machines or a separation? Are we making them alien or making kin? What can an alternative narrative be to establish a new mode of human-machine coevolution?

Machine-centered design is not about privileging machines over humans, but how to better understand machines and build a more equal relationship between humans and machines. The goal of this project, therefore, is to seek principles for establishing this new relationship by creating a series of artifacts.

I tried to identify essential traits of the more equal relationship, to translate the ontological thesis into contextual framework. Important elements include respect, acknowledging machines have the right to have their own needs and viewpoints; communication of intention, expectation and explanation; trust in machine intelligence and its ecologies, which brings a sense of secure in the relationship and opens up space for self-understanding and serendipity.

To turn these abstract concepts into concrete ideas and scenarios, it's important to think about specific context, intent, and behavior. Drawing inspiration from the early-stage brainstorming, I focused on the domestic space and explored topics such as privacy, collaboration, energy, etc.

To explore potential forms of the new relationship, I developed five machines, each in situated context, with different intents, and potentially exhibit different behaviors. Through an iterative prototyping process, I examined different metaphors and tested the interaction they informed. Metaphors played an important role in this project. As metaphors impose constraints and affordances, to design a new interaction, new metaphors are needed.

Each machine has a specific scenario in which they work. Within the domestic space, these scenarios were carefully crafted in order to illustrate the narrative. Five Machines attempts to build conversational rather than command-oriented interfaces to provide a more equal space for communicating and negotiating between human and machine actors. In doing so, power dynamics are rebalanced. Although we tend to attribute human traits to machines, Five Machines tries to go beyond anthropomorphization and focuses on interactions themselves to establish new relationships.