Conferences are an endless loop of small talk. Everyone has limited time and wants maximum exposure as they go booth to booth. So when IDEO and AARP set out to design an installation for the Atlantic CityLab conference around the topic of improving communities, we wanted to see if we could buck that trend.

As a continuation of their Livable Communities initiative—where AARP is working in hundreds of communities to make them great places for all—the organization went to CityLab to offer themselves as a meaningful voice and productive resource for cities seeking better futures for their residents. AARP asked IDEO to develop the installation as a first step in a longer engagement to help them shift the perception of what city practitioners might expect from the organization.

Seeking to foster real learning and genuine connection for visitors to the exhibit, we set ourselves the challenge of creating easy but meaningful ways for city practitioners from around the world to speak to, share with, and learn from each other.

The result was Local Wisdom, a professionally fabricated, interactive exhibit comprised of three key activities in which participants could share their hope, fears, and pride for their communities. 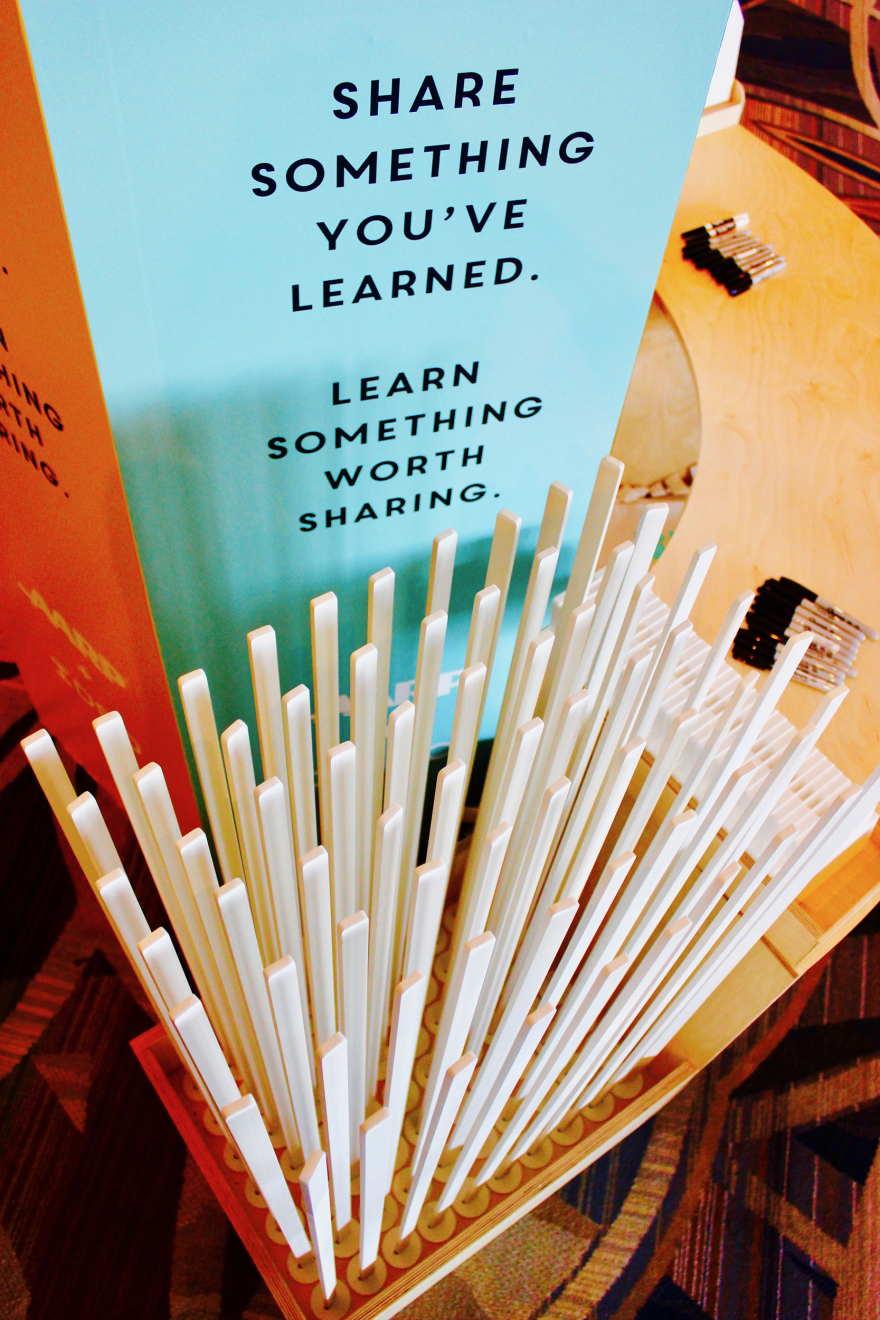 Story Building Prompt Participants are invited to select a dowel on which they build a story of lessons learned and shared. IDEO 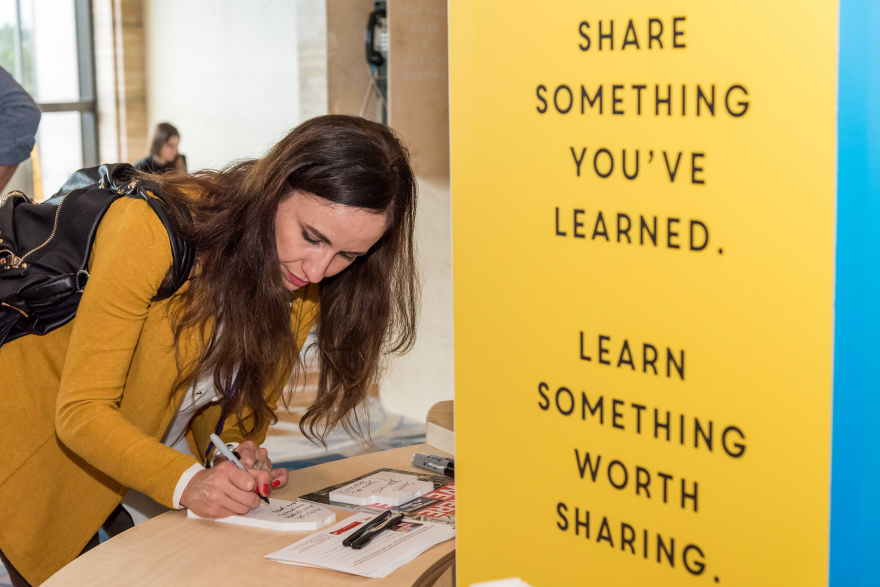 Story Building Writing Visitors to the exhibit wrote a challenge their city had faced on one side of the tile, and the solution they implemented to address the challenge on the other. IDEO 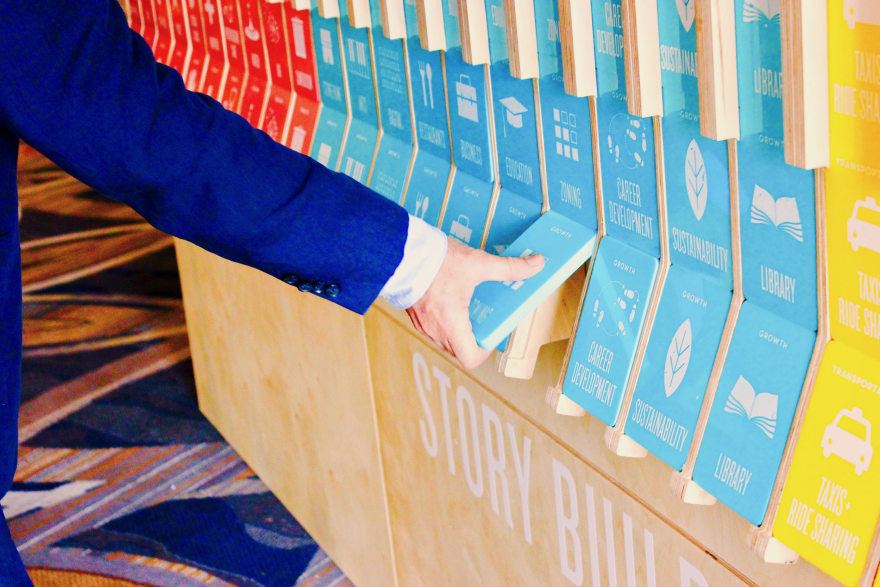 Story Building Tile Wall Visitors then selected from a tile wall comprised of single touchstone words that express the ingredients of their story. IDEO 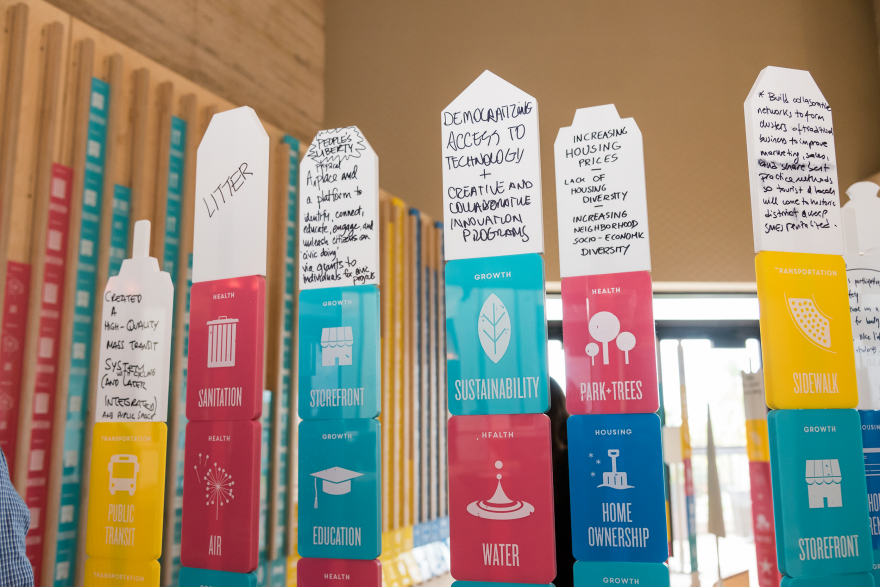 Story Building Towers After stacking their tiles, participants display their story towers by inserting the dowel into a specially fabricated table. IDEO 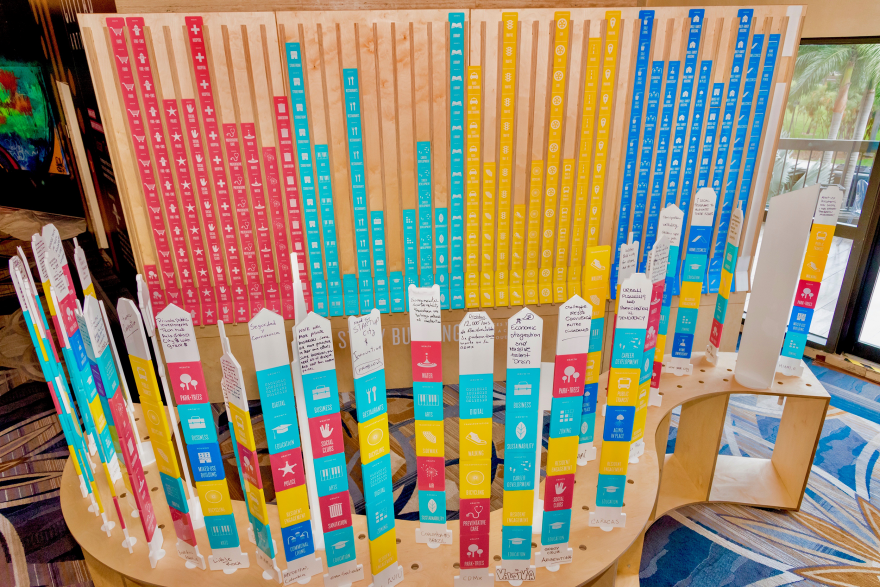 Story Building Cityscape A cityscape of challenges and solutions built collectively over the course of the installation. IDEO 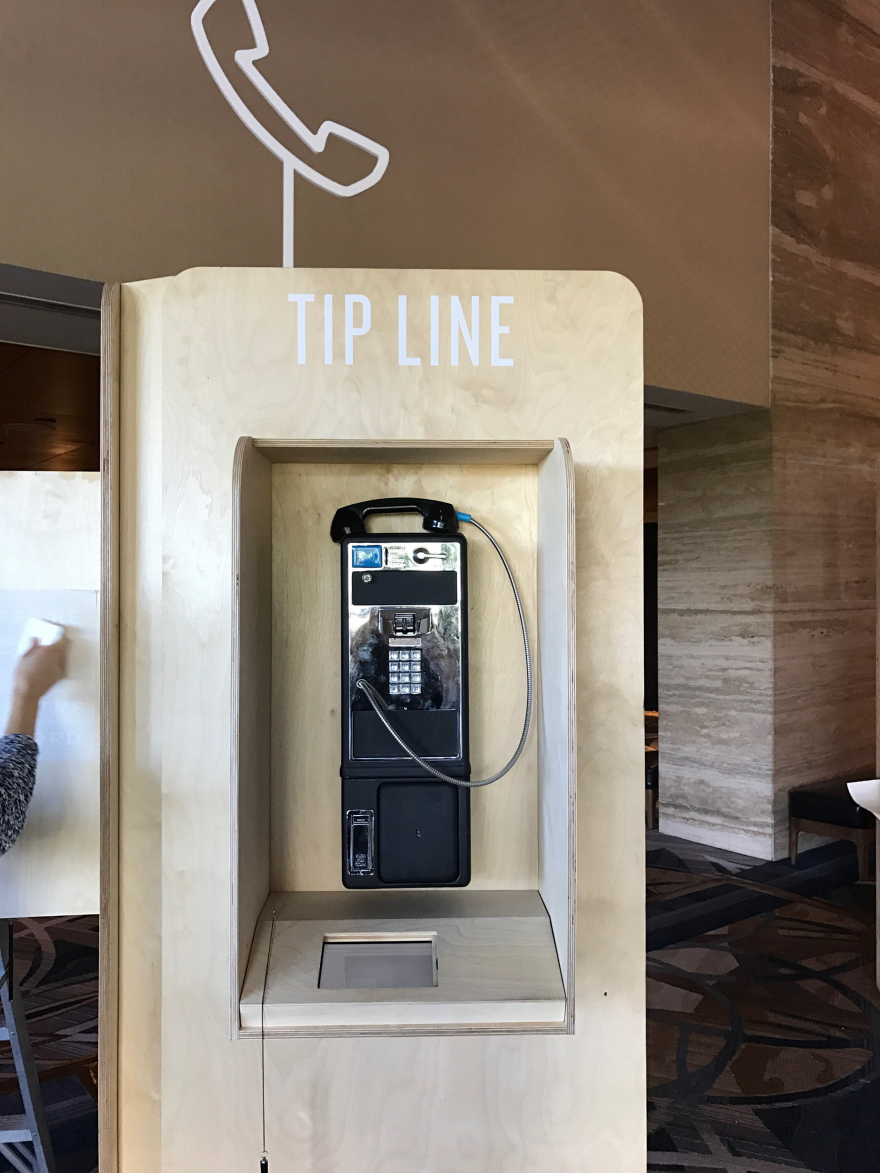 Tip Line Phone Passers by were stopped by the chiming bell of classic payphone hacked to ring when people walked by. IDEO 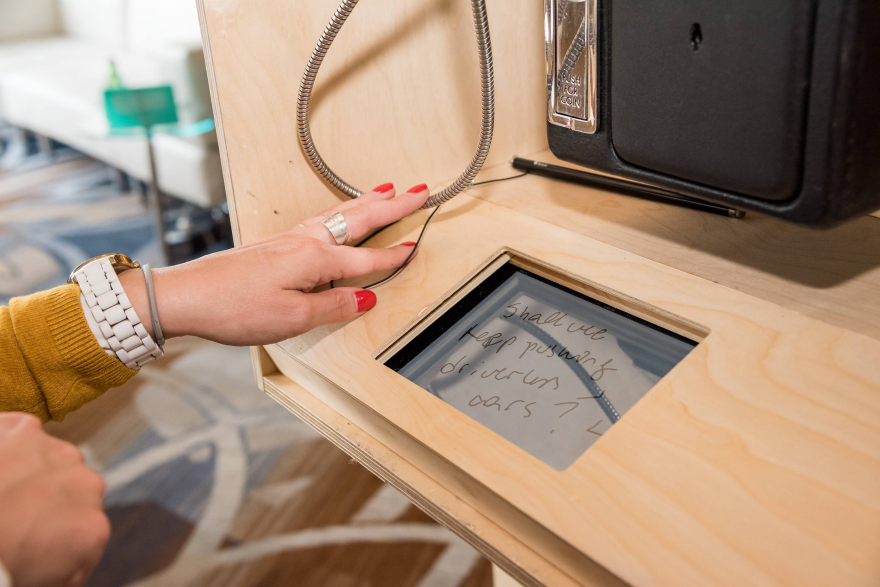 Tip Line After picking up the phone, participants were invited to slide a door in the wooden phone booth to reveal a hidden screen onto which they could write their deepest hopes, fears, and visions for their city's future. IDEO 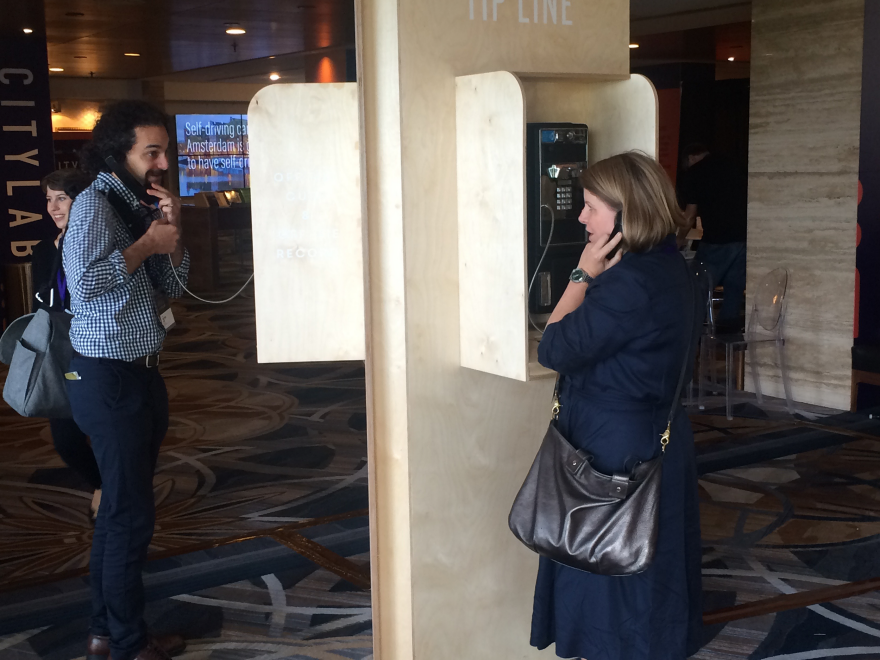 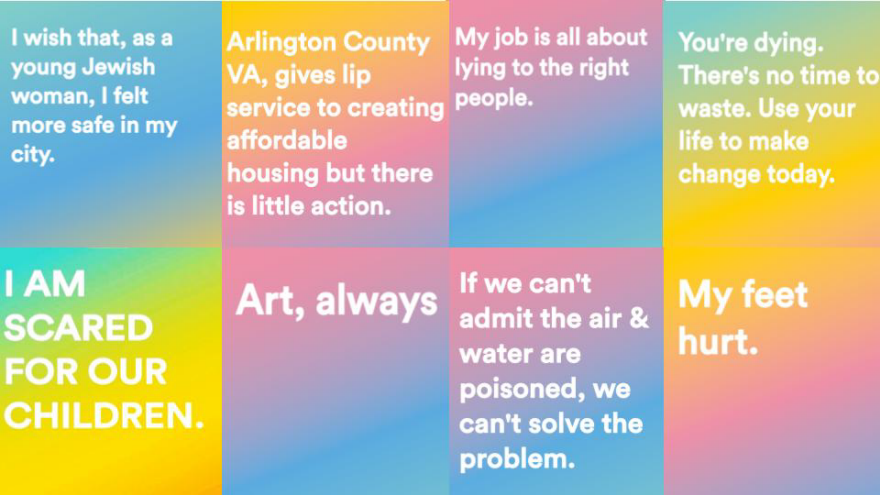 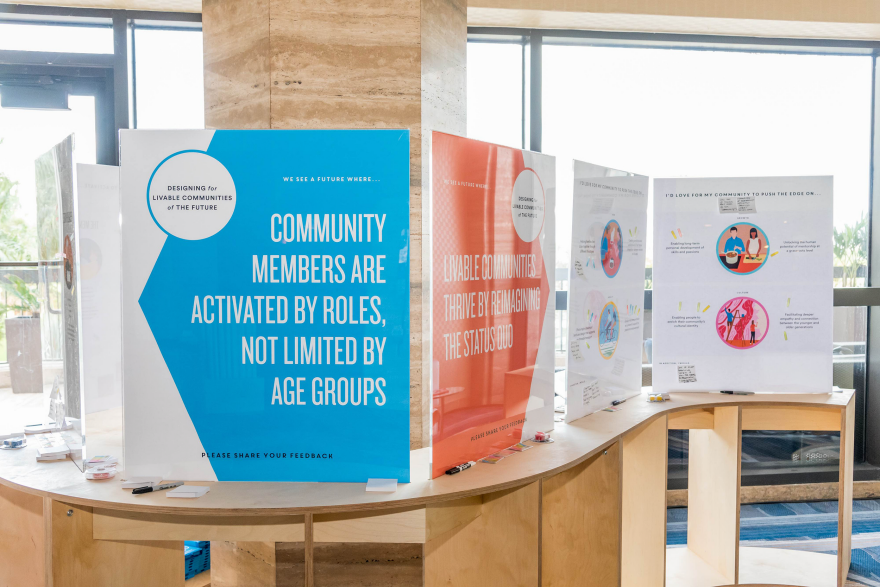 Future Stories Display Visitors were encouraged to add their thoughts and builds to two provoking versions of the future—one where cities residents were activated in their communities according to their archetypal roles, and another where communities thrive by reimagining relevant topics such as mobility, home, and culture. IDEO 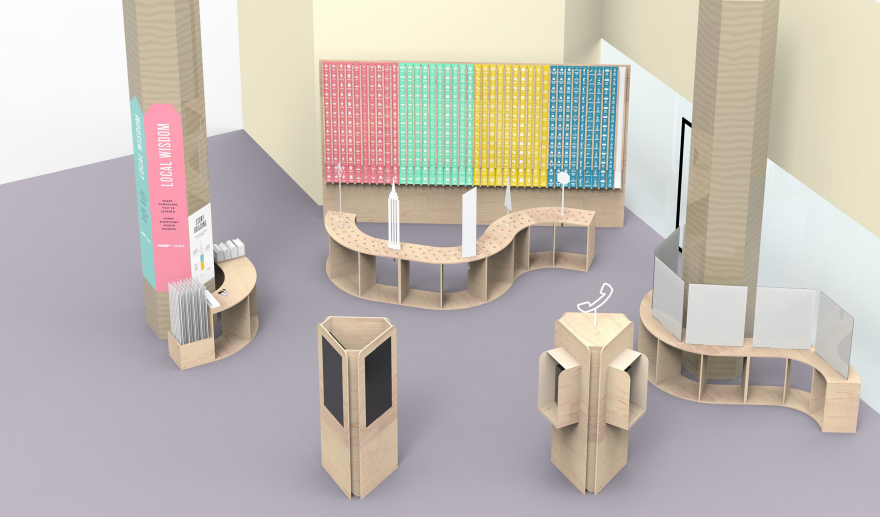 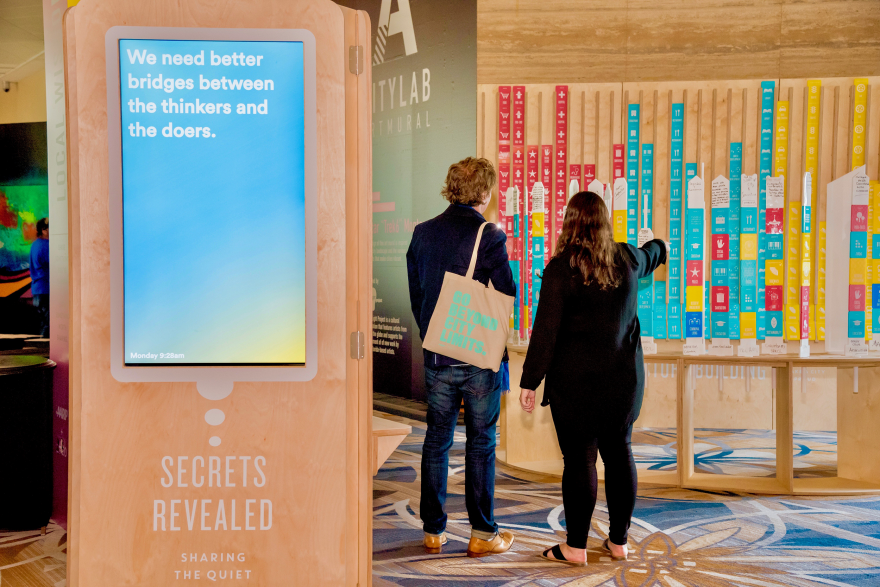 Using the framework of human-centered design, we began our research phase with an empathy exercise that premised all our visitors would be introverts. We designed parameters for engaging the introvert personality that included eschewing superficial small talk, connecting one-to-one, permission to move at one's own pace, and being able to speak without a spotlight. These constraints opened up new avenues for engaging people in an intimate and more emotional way. We spotted an opportunity to create a safe space for participants to share what motivates them, what inspires them, and what might drive them to create change in the future. This "introvert outreach" approach became the cornerstone of our design.

We wanted our installation to cut through the conference routine and use the five minutes we might have with visitors to exchange something of value beyond business cards. To that end, our team zeroed in on the sort of feelings that help you really get to know a person, and designed three distinct pieces of the installation to surface three key feelings: Hope, Fear and Pride.

The Story Building element of our installation was a mix-and-match storytelling sculpture that allowed participants to quickly and simply share solutions to city problems.

Every city faces the same problems but do so in completely unique ways. We gave visitors blank tiles on which to write a distinct challenge they faced in their city on one side, and a successful approach they took to address that challenge on the other. They then turned to a wall of colorful tiles, each bearing a single, touchstone word from the city practioner tool box. Participants selected the tiles that represented the key ingredients of their story and stacked all the interlocking tiles together into a simple but striking physical form—a tower. The practitioners placed their towers on a special table and, as more and more towers were added, a skyline of challenges and solutions grew, creating a collaborative sculpture built by all participants.

One tower amidst this skyline began with a tile reading, Stagnating downtown mainstreeton one sideand Limiting traffic, re-zoning, expanding pedestrian walkways, partnering with local artistson the other. Beneath that were colored tiles reading sidewalk, business, traffic, and arts. Together, the tiles told a visual story of one visitor's effort to reinvigorate his city's downtown neighborhood. Visitors examined this story, and many others like it, in search of elements that might be useful and inspiring for their own work.

The depleted rows of tiles from the selection wall also told its own story. As visitors removed tiles from each row, the remaining tiles became a reverse heat-map, visualizing what elements cities were most proud of addressing.

The elements of tactile play and joyful color in this installation immediately put people at ease and encouraged them to step forward and engage. Participants relished the opportunity to contribute, rather than just consume, and enjoyed the satisfying combination of learning and proudly celebrating their accomplishments. From bringing clean water to children to overhauling the zoning restrictions on guest homes, our city practitioners certainly had a lot to celebrate.

For this feature of the exhibit, we wanted to allow people to say the things that might not get said during the carefully worded panels on the main stage. We asked them, as people rather than practitioners, how do they feel about their fellow citizens, their city, their world?

As people walked by on the conference floor, chatting or texting on their cell phones, they were caught off guard by a nostalgic sound—the insistent bells of a public payphone. The curious quickly spotted the payphone in our exhibit and lifted the receiver to say hello. What they heard was the voice of an invitation: "In front of you is a secret screen. Use it. Write something true. Something you'd hesitate to say out loud. Your unrealistic hopes for your city. Your silent fears about your community. The tip everyone should know but no one will admit."

Faces went from puzzled to delighted. No one hesitated. They slid aside a small door at the base of the payphone to reveal a touchscreen tablet and immediately began writing. They knew exactly what they wanted to say.

The playful nature of the payphone and secret screen allowed us to quickly build the trust needed to elicit surprisingly personal revelations ranging from I'm starved for beauty to My job is all about lying to the right people. To heighten the personal quality of what was being shared, we deliberately required visitors to write their answers by hand rather than by keyboard.

After a few minutes, allowing time for visitors to walk away from their confessional experience, the collected secrets appeared front and center on nearby screens, reset in anonymous type and displayed against bright colors to amplify their whispered truths for everyone to see.

Our third piece was designed to offer either the lightest touch or the deepest dive. It was an opportunity for visitors to rethink their communities and reimagine their futures from the ground up.

A curve of panels displayed two sets of provoking visions for the future. One side invited people to envision a future where community members are activated by their archetypal roles—for example, The Mayor of the Block, The Neighborhood Expert, or The Force of Nature. The other side probed visitors' appetite for change by proposing a future where communities thrive by reimagining the status quo of specific topics, such as mobility, home, and culture. People were invited to skim the two sets of provocations and vote with stickers for the ones that resonated. The intent was to plant a seed of possibility, and open doors for practitioners to consider new avenues for change. People were free to move on from this point, but many chose to linger and talk with our AARP and city experts, who were situated nearby, ready to engage more deeply with people in the concepts on display. Twenty seconds or twenty minutes, the choice was theirs, but either way, participants walked away with energizing new possibilities to take back to their cities.

Guided by our self-imposed "introvert" premise, our designers were especially mindful of the emotional balance of their designs. Our industrial designer created structures to be iconic but not intimidating. Our interaction designer created interfaces that were striking, but not jarring. The colors, language and layout we chose was centered around the idea of lowering the bar to entry while increasing the outward impact.

While Local Wisdom was initially intended as a one-off installation, the response from attendees to the experience—and especially to AARP's role as host—was so positive that AARP was inspired to continue using it in other cities at other conferences. As a tangible expression of their desire to engage with city practitioners in unexpected and powerful ways, Local Wisdom allowed AARP the space to inspire future conversations and point out new directions.

Our empathy exercise of "introvert outreach" grounded the project in a set of specific needs which, ironically, allowed the experience to grow into something that left all of our visitors smiling broadly and thinking deeply. By facilitating a public peer-to-peer conversation that still felt private and personal, the design served as a warm exchange of knowledge rather than a cold transfer of information. By marrying Hope, Fear, and Pride with the tools of Surprise, Trust, and Play we were able to engage people in an unexpected dialogue that allowed them to happily shout their private fears, share their public triumphs, and shape their collective future. Ultimately, the success of the installation lay in the simple fact that it was relevant on a professional level while still delivering a satisfying human experience.