The Collature is designed to increase collaboration in the workspace between small groups of people in a school library setting. The whole furniture is made completely of cardboard. The design is based off triangular and circular forms that come together smoothly into the design. When the chairs come together with the table, the furniture will form a cylindrical shape to show the circular form.The way the table base is configured, is from a simple structure made of 2 pieces of cardboard that we came up with when experimenting with the material.

The table is laid out in such a way that all the people sitting down can look at each other with ease. This is to make the communication amongst the group members easier because they would not need to turn their heads much. There is also a common space at the corner of the table where one side is extended. This space is for anyone to put materials for all the group members to see easily and discuss. There are also personal workspaces that the members can do their own work on. The personal workspaces are small so that they will not do much personal work, but discuss more. The size of the table is optimised such that the group members would be close to each other which would help with the discussions.

The seat is 70cm tall, making it like a high seat where the user would put put their feet on the ground so that their position they are sitting in makes the blood circulate better, allowing them to think better and faster. The seat has a small area for the user to rest their weight only on the front of the chair and not sit completely in it. The backrest of the chair is just a short 5cm extrusion that only serves to prevent the user from sitting deep into the chair where they would not be in a beneficial position to discuss. 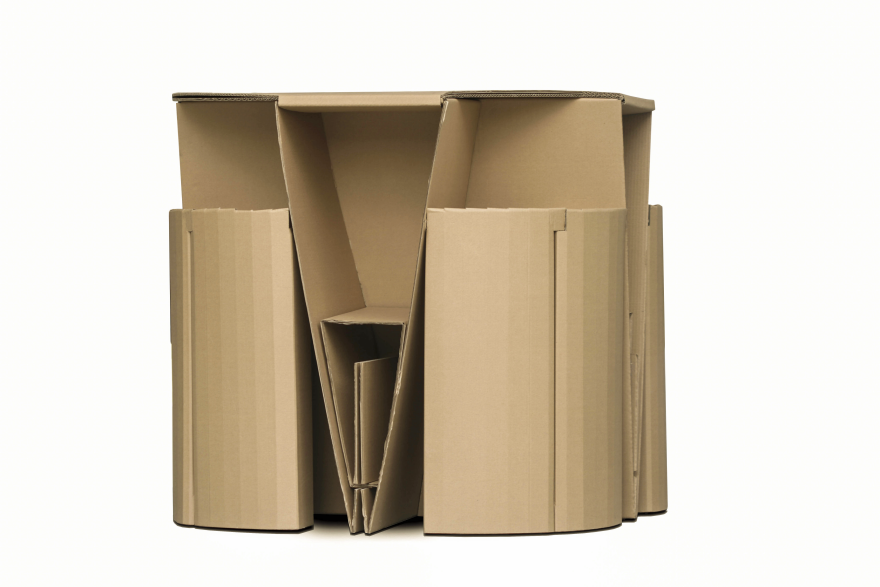 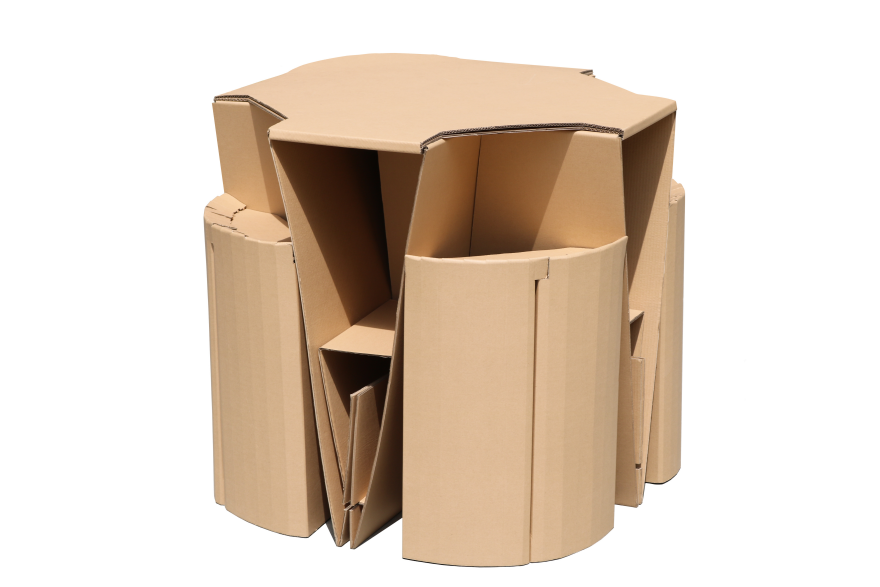 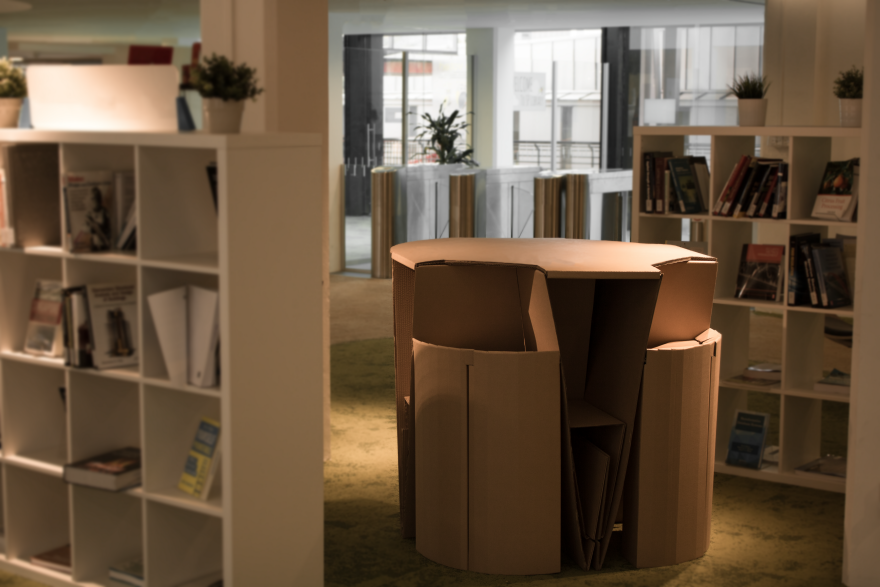 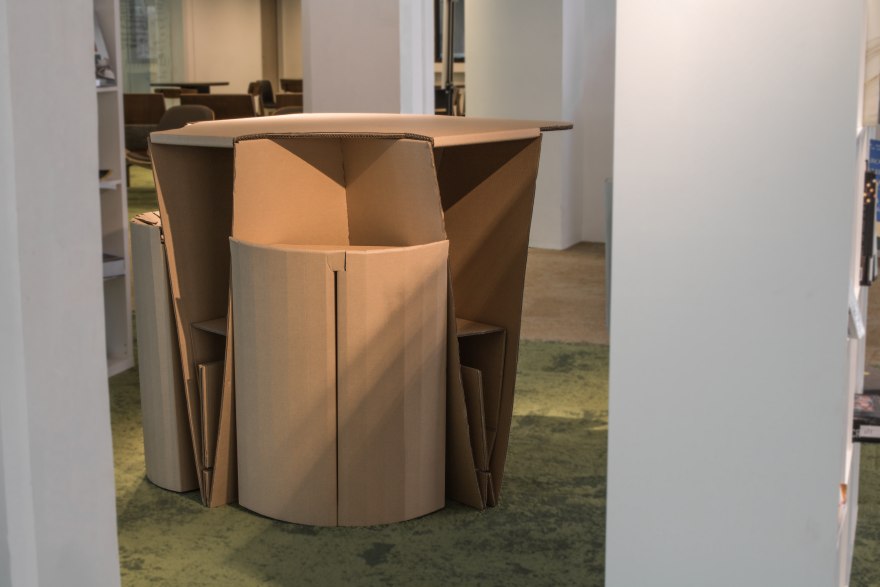 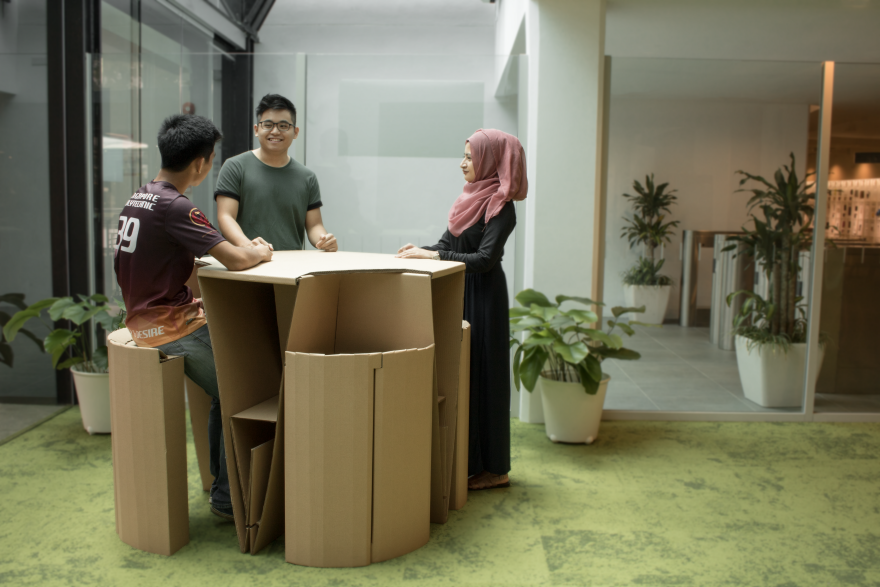 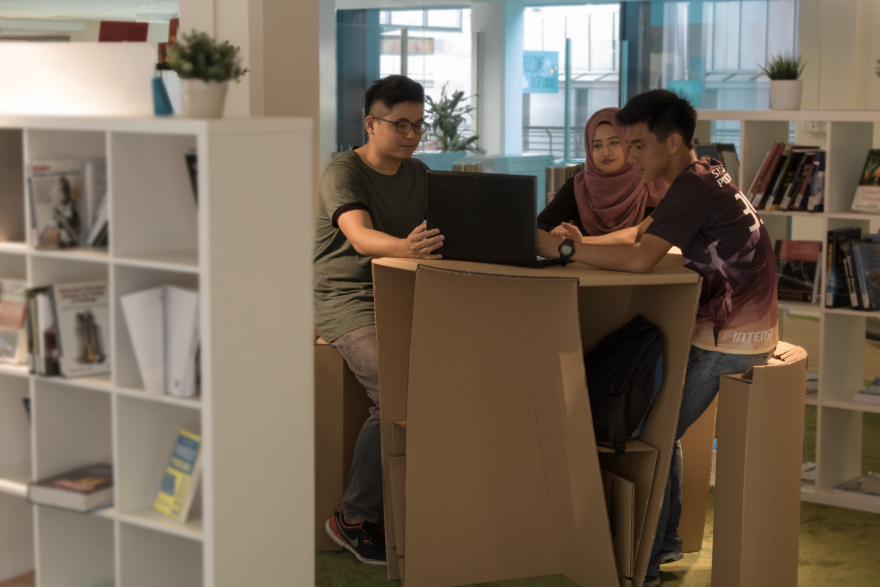 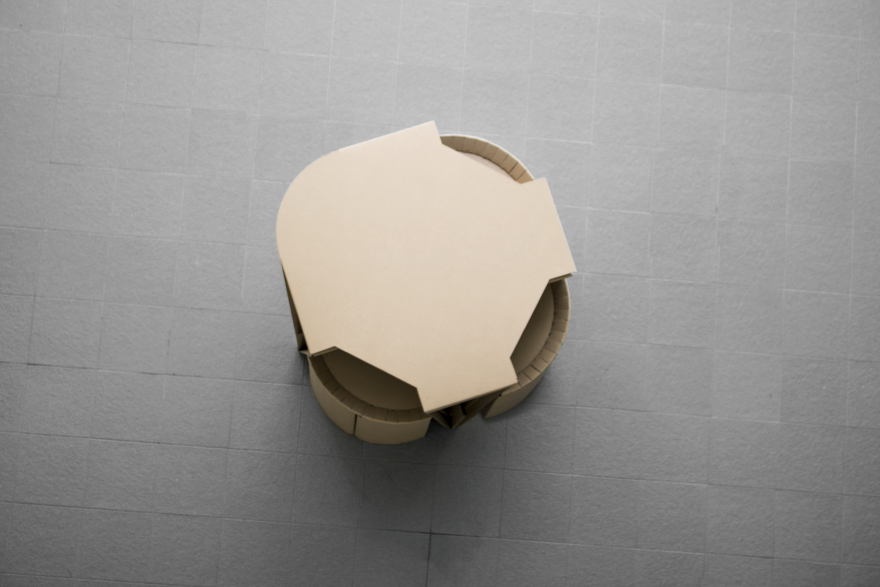 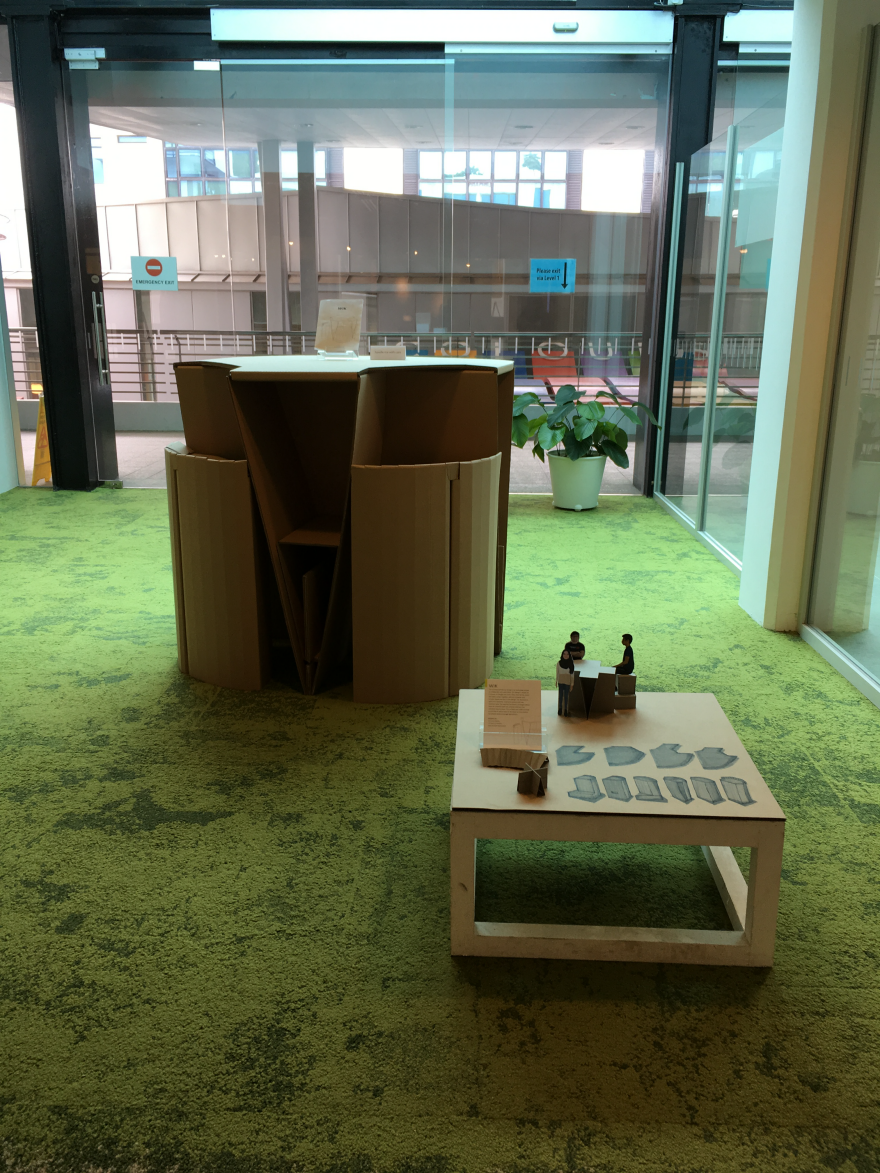 We started off the project by looking at how small groups of students work together. In our research, we found out that the students find a lot of difficulty in having long discussions and would start to do their own things. From that, we realised that we needed to encourage the groups to discuss more and have more effective discussions. We also did research on the library space where we realised that the main entrance of the library was a more formal setting, a neat and organised place.

For the first few weeks, we experimented with different cardboard joinery and also the strength of it. To test out our joineries and structures, we tried to make a stool that was 25cm tall and able to support the weight of a human standing on it. One way we discovered to increase the strength of the cardboard pieces was increased by making folds in them, preventing the cardboard from folding easily. The structure we made was inspired from the cross joinery and triangulation to strengthen the stool. Just 2 pieces of cardboard folded into a triangular shape and fitted into each other was able to hold the weight of the test subject of 65kg. This simple structure was effective in balance and little material usage for the weight it could carry.

Continuing on our research on the ways that groups interact with each other while collaborating, we studied on the best ways to make the group discussions effective. The first thing we found is the sitting posture. When the user sits on an elevated seat, the blood in his body can flow better, helping the person concentrate better during discussions. Another thing that encourages discussions is the angle at which the users are facing each other. When each of the persons on the table can look at each other without turning their heads too much, they are able to discuss more effectively. Another thing that makes collaboration more effective is the proximity between the users. If the users are too far away from each other, it may be hard for them to have a conversation, whereas if they were closer, they would easily discuss and share with each other. The close proximity also helps to make the angles at which the users are sitting from the other.

Sometimes in group discussions, some of the members might want to share items with the others and so having a common space where all the people are able to look towards easily and discuss about it together is important. There may also be times where the group members may need to break up to do their work separately. To accommodate for this, some personal space should be given to each of the users. Because the furniture is trying to encourage discussions, the personal space given is not too big which may make the users too distracted by their own work.

Our furniture when placed together would take the form of a cylinder and the structure of the table using triangulation to fit the theme given to us of circles and triangles. From the top view, the structure that we would use for the table had a cross shape. The seats being shaped like quarter circles and being placed in the spaces between the cross would form the cylindrical shape. Because there are only three seats and four spaces, the last space is used as the common space.

From the first design, one concern was that the users will not have enough personal space. Another concern was with the leg space that may not have been sufficient. To give the users enough space to work on, we offset the inside corners of the table outwards so that there will be sufficient space but not too much that the form of the cross would be spoilt. To solve the problem of the leg space, the seats have been chamfered at the corners to create a flat surface where the users face each other when sitting down and makes it more comfortable to sit in. This also allows them to sit closer to each other because they can move closer to the table.

The chair is 70cm tall so that the users will be forced to sit in the semi-standing position where they can rest some of their weight for their blood to flow better. At the back of the chair, we added a short backrest that is 5cm tall. This backrest is there so that the user will not slide themselves too deep into the chair where they will feel more comfortable, making the collaboration less effective. The front of the chair is strengthened with a double layer by folding an extension back upwards. The front of the chair is where the user will be putting all their weight on and much less on the rest of the chair so the front needs to be strengthened the most.

To accommodate for the elevated chair, the surface of the table is 30cm higher than the sitting height. The table at 1m tall allows people to work at a comfortable height from the chairs. People who are standing up to discuss are also able to share over the table without having to bend over. Because the cardboard was not very stable and a bit flexible, we had to add a triangular piece that fit into the holes of the triangular structure. This piece helped to keep the bottom of the table structure together. This addition was also able to double as a bag stand where the user can place their bags in instead of on the floor as the space where our furniture is to be placed does not allow bags to be placed on the floor. To keep the triangular form of the structure, we offset the strengthening piece inwards so that the outline of the form can still be seen.