As part of SVA Products of Design's partnership with the US Department of Veterans Affairs (and held through the Design Research and Integration class taught by IDEO's Lawrence Abrahamson), designers Alexia Cohen, Will Crum, Kevin Cook, Jiani Lin, Teng Yu, and Antriksh Nangia explored gender, the military and public perception—creating a design proposal aimed at changing the way people see women veterans.

Before project kickoff, Abrahamson asked a room of 50 people to close their eyes and to imagine a military veteran. Then he asked, "Now, how many of you pictured a woman?" Two hands went up.

Overcoming the civilian public's ignorance of women veterans as a growing group would prove to be the team's objective for the next 15 weeks. Specifically, their launching point was this question: "How might we establish a new cultural norm that a woman veteran is also a veteran?"

The team conducted primary and secondary research, reading all relevant scholarship before interviewing veterans, VA staff, and the general public. After extensive synthesis, a sea of quotes was distilled into key insights, which were then extrapolated into design principles to guide ideation. Along the way, insights were verified and refined with the help of the stakeholder network developed in the interview stage.

At the end of 15 weeks of interviews, synthesis, ideation and prototyping, the team presented the SheServed Project, a platform and campaign for celebrating women service-members' achievements and delivering their stories to a larger audience.

SheServed's ultimate goal is to build public perception of women as a significant and equal part of the US's veteran community, and the project has two main components to help achieve it: an accessible, shareable brand identity and ad campaign, and a program that uses blank postcards to solicit and publish veterans' stories about the exceptional women service-members they know. The next section outlines the details of how the project would work, and how the design team's research and prototyping process led to the proposal in its final form. 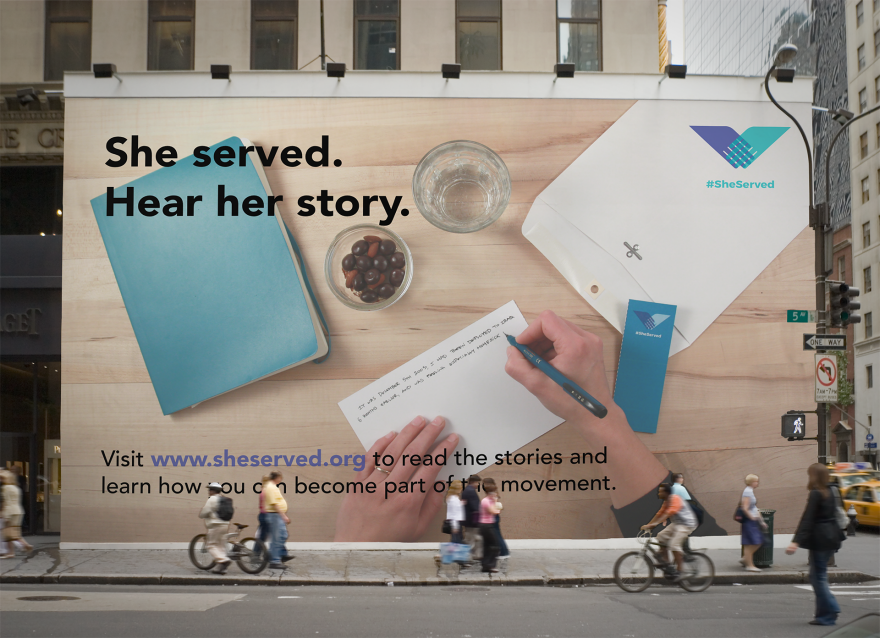 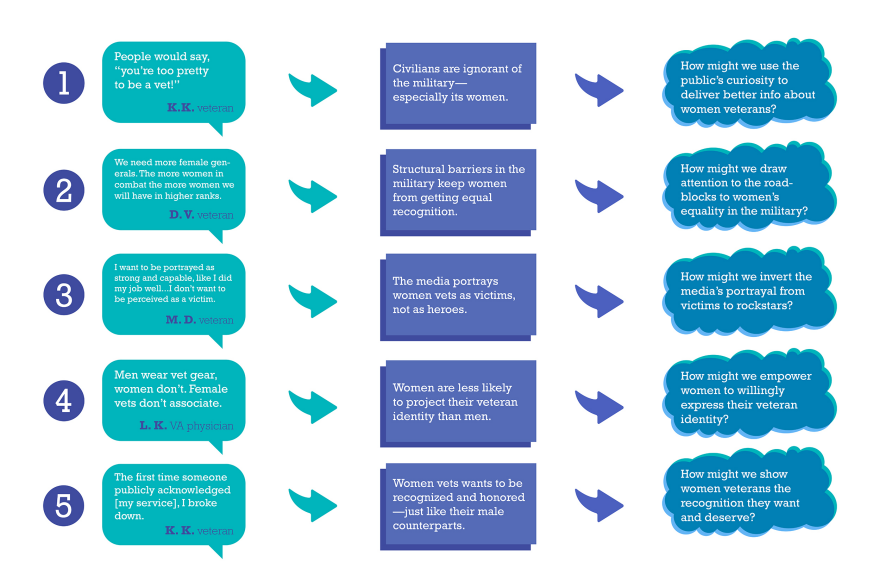 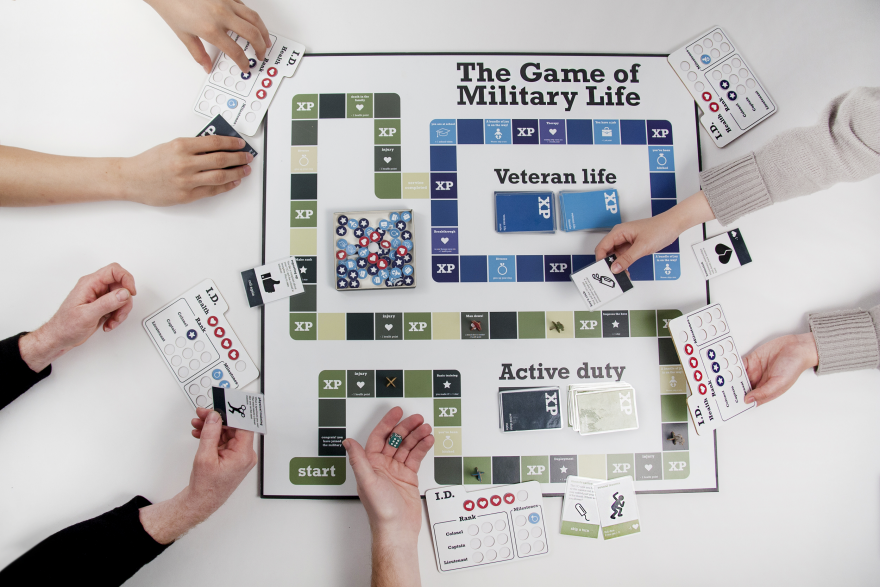 The Game of Military Life, Insight # 2 The Game of Military Life, a highly-researched (and playable) board game that takes players through the user journey of Active Duty and Veteran Life. Gameplay reveals countless obstacles; though women and men veterans have experiences in common, the game quickly reveals that the deck is indeed stacked against women, and gives the players a glimpse into what they might experience in reality. Alexia Cohen 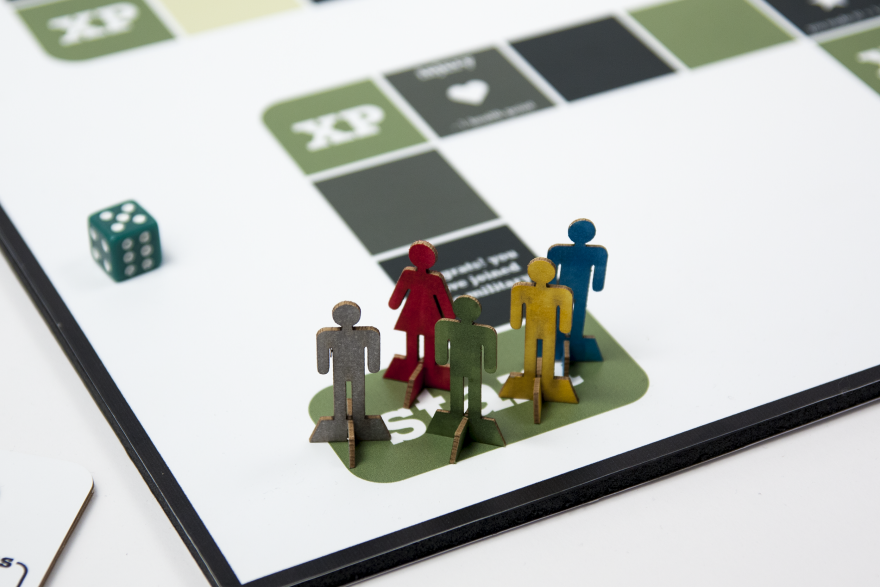 The Game of Military Life 5 Players: 1 woman and 4 men. reflects the current numbers in the military Alexia Cohen 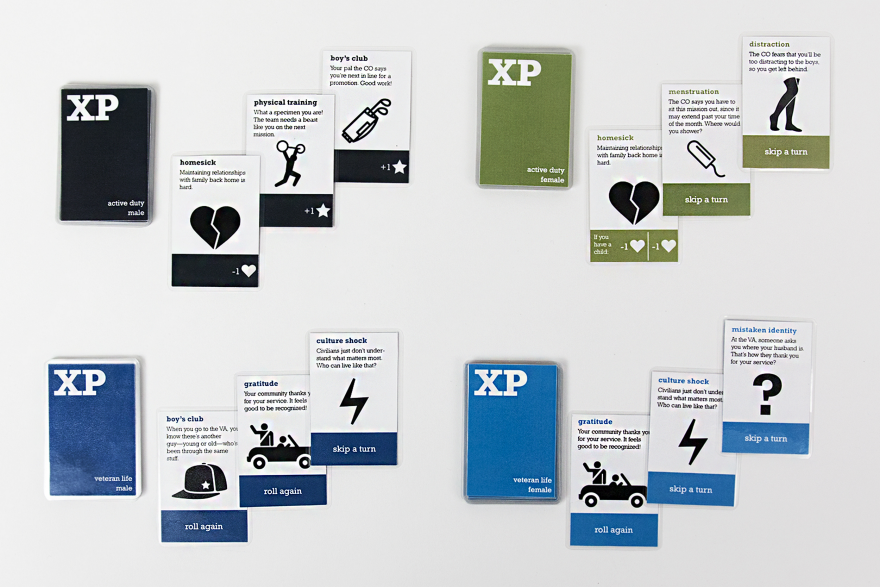 The Game of Military Life, Experience Cards Through the "XP" cards it is quickly revealed that women in the military face barriers that men don't experience, putting them at a disadvantage. Alexia Cohen 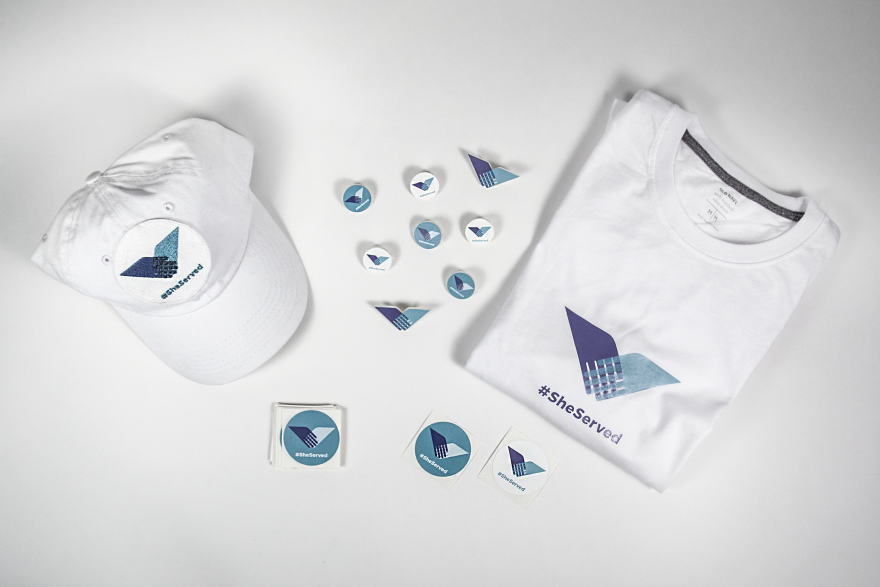 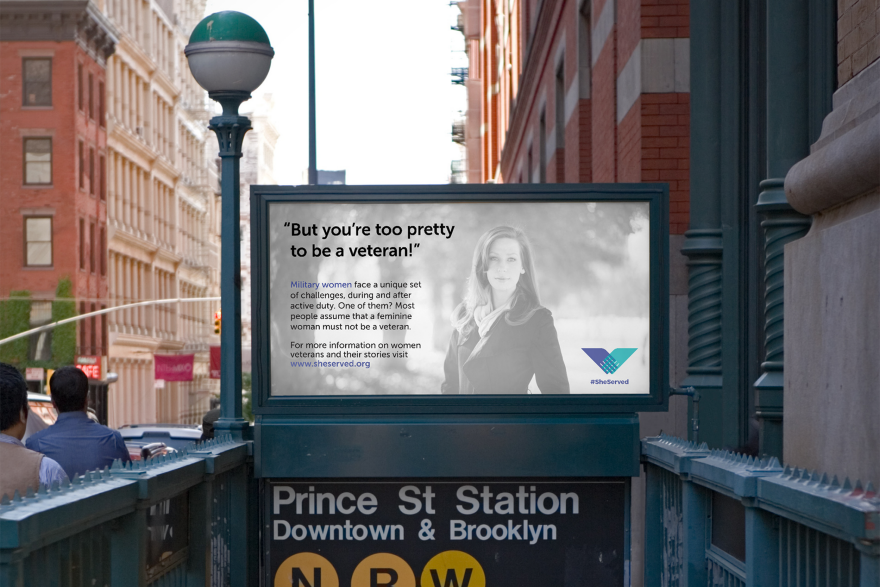 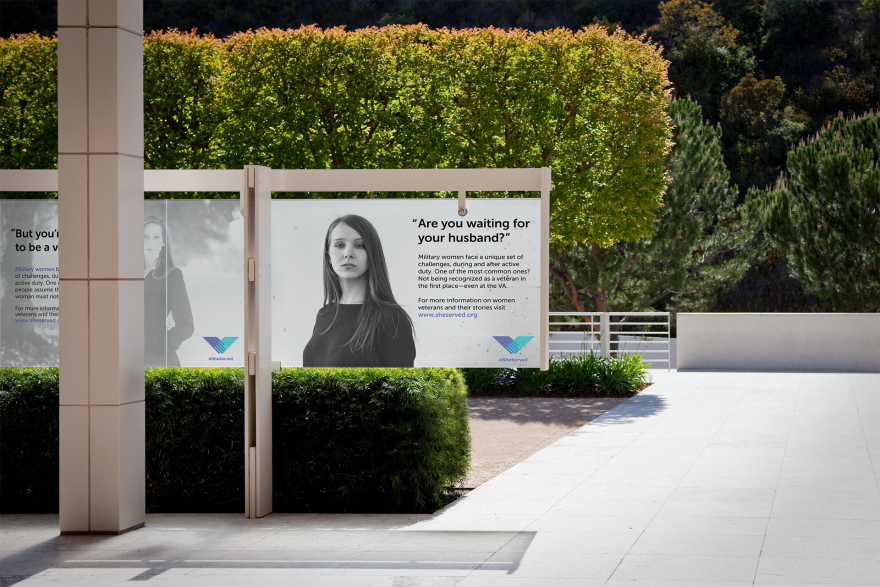 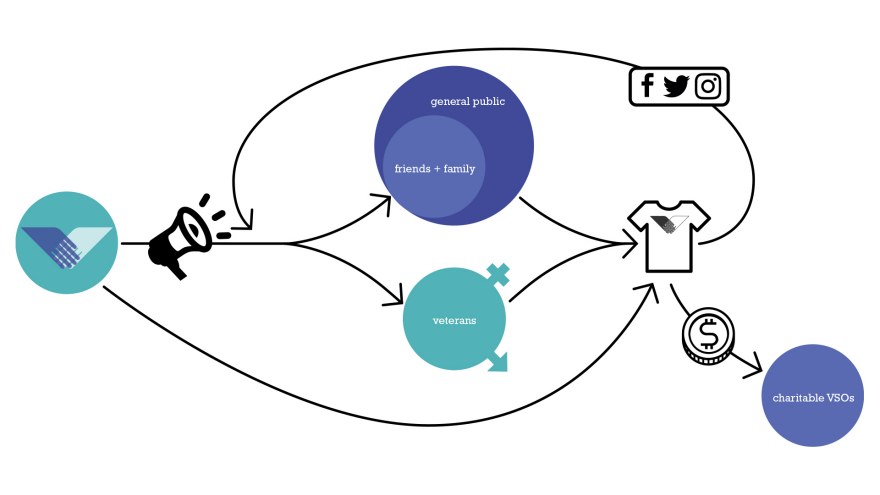 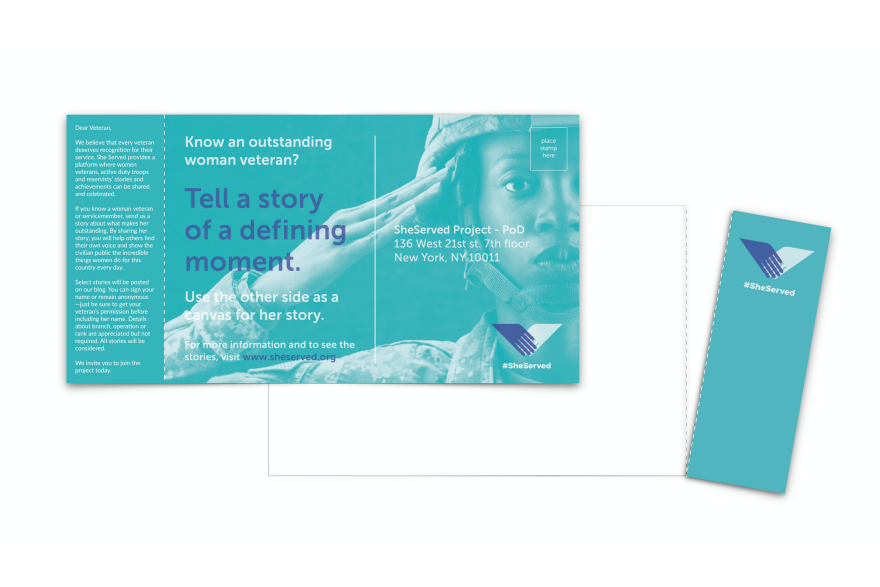 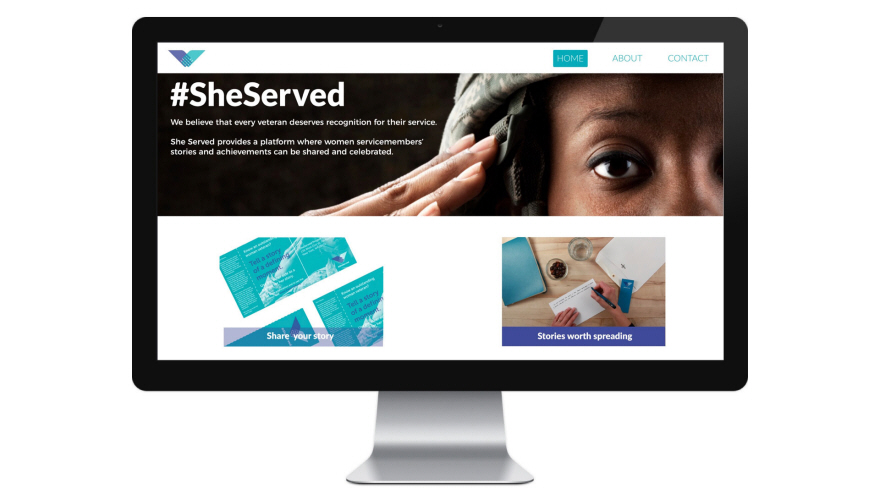 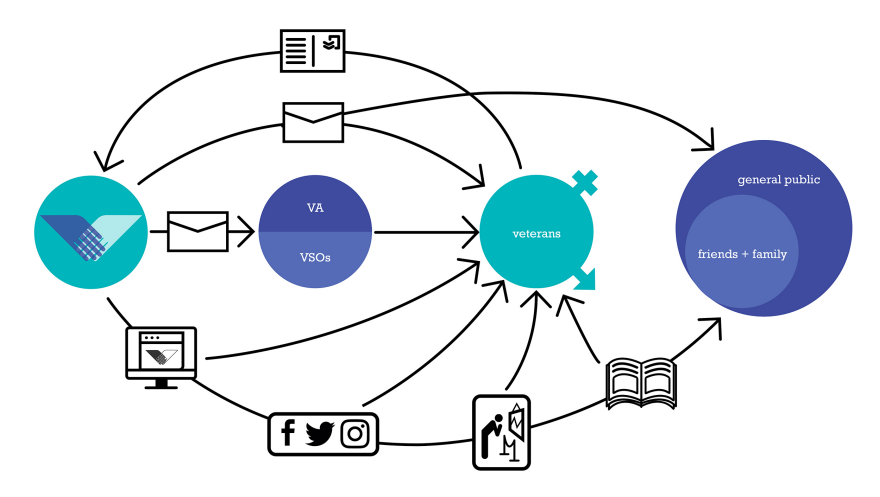 To answer the question, "how might we establish a new cultural norm that a woman veteran is also a veteran?", the team was first forced to look inward, examining their own biases and limited knowledge of the military. Like the general public they would soon interview, the team had limited social connections to the military, almost a completely separate society from their own. By confronting their own ignorance, the team was then motivated and empowered to dispel and replace it with appreciation and empathy in the civilian public.

The process began in earnest with research. The team first familiarized itself with the history of women in (and around) the US military before moving on to all available scholarship on the present condition of veteran and active-duty servicewomen. Learnings gained in this phase were used to develop questions and discussion guides that would drive interviews.

The team conducted 10 expert interviews with women veterans and staff in the NY Harbor VA's women's clinic, probing for thoughts and anecdotes about how vets think the public sees them, as well as how military service itself impacts women's sense of veteran identity. In parallel, the team verified the civilian public's ignorance of women veterans—and the military in general—through 27 intercept interviews in New York City and an online survey distributed through social media.

After six weeks of research and interviews, it was time to synthesize information received into insights learned. The team sorted dozens of key quotes into knowledge areas that were then distilled into insights. These were then tested with a few women veterans and VA staff members, chiefly through the use of "tangible insights," some of which are pictured here. These stakeholders helped fine-tune final phrasing, but also appreciated the detailed understanding and empathy the team had developed over the course of their research.

Once insights were approved by stakeholders, the team was able to complete the flow from representative quotes to fully developed design principles, which were phrased as pointed "how might we" questions to be answered by a creative concept:

Insight: Civilians are largely ignorant of the military.

Principle: How might we use the public's curiosity to deliver better information about women veterans?

Quote: "We need more female generals. The more women in combat, the more women we will have in higher ranks." —D.V., Veteran

Insight: Structural barriers in the military keep women from getting equal recognition.

Principle: How might we draw attention to the roadblocks to women's equality in the military?

Quote: "I want to be portrayed as strong and capable, like I did my job well…I don't want to be perceived as a victim." —M.D., Veteran

Insight: The media portrays women vets as victims, not as heroes.

Principle: How might we invert the media's portrayal from victims to rockstars?

Insight: Women are less likely to project their veteran identity than men.

Principle: How might we empower women to willingly express their veteran identity?

Quote: "The first time someone publicly acknowledged [my service], I broke down." —K.K., Veteran

Insight: Women vets want to be recognized and honored—just like their male counterparts.

Principle: How might we show women veterans the recognition they want and deserve?

Finally in the brainstorming phase, the team paused to appreciate how conversant they had become on a group and subject they had originally known very little about. They had been privileged to meet a diverse group of women veterans and VA staff and hear their amazing stories first-hand. As solution ideas made their way onto post-it notes, the team was aware that each idea was directly influenced by a desire to share these remarkable stories with the general public.

After some refinement, the team had a small array of high and low-tech solutions to share with stakeholders. As women veterans and VA workers interacted with sketch prototypes, it quickly became clear that the two groups had very different perspectives on what the solution should be. At this point, the team was forced to decide: Who is the solution for, the VA or the women veterans? The team ultimately resolved to focus on serving the needs and interests of the women veterans themselves, deeming it most in line with the project's initial prompt and goal.

Once this was established, the project was liberated from the onus of needing to fit within the VA's scope and red tape—and two strongest solutions quickly emerged.

Inspired by the Livestrong bracelet's success at raising funds for cancer research in the mid-2000s—a truly viral campaign, before "viral" was even a thing—, #SheServed is an awareness campaign built on a few out-of-home ads and the belief that strong visual branding can ride word-of-mouth to turn a cause into a movement. Converts would come to identify with the campaign's defining statement: "The service and sacrifices of women veterans are equally significant to those of their male counterparts. I stand with veterans—women vets included—in their search for recognition and fair treatment." To show their support, the public can buy #SheServed-branded gear, with proceeds going to partner charities combatting homelessness and mental health issues among veterans.

The Postcard Stories Project provides a platform where women service members' stories and achievements can be shared and celebrated. Veterans receive blank postcards—either at the VA, their local VSO clubhouse, or in the mail—that invite them to write a story about a woman veteran or service-member that they think is exceptional. The team had learned that the military are humble people who put the team first, meaning they are reluctant to talk about themselves but happy to talk up their comrades-in-arms. Thus, the campaign is designed to leverage that spirit of camaraderie to get vets to celebrate their peers. And by leaning on the support of men vet allies, the campaign empowers women vets by showcasing their accomplishments and appreciation in front of a larger audience.

Both #SheServed and Postcard Stories could work to build awareness and understanding of women vets on their own, the team knew that they would work best in concert. While #SheServed provides a clear message that the public could easily digest and disseminate, Postcard Stories gives the public a path for deeper understanding of and empathy for women veterans through robust, human content. Also, the emphasis on real stories builds credibility among veterans and friends of veterans who may be wary of yet another "I stand with veterans" cause that may only be skin-deep. Lastly, the content of the stories themselves—the amazing things that women service-members and veterans do every day—can help expand the public's definition of a veteran's service beyond just combat experience.

While some questioned whether making sharing stories easier by creating a submission portal at sheserved.org, the team remained committed to its no-tech postcard approach for three reasons. First, the slight barrier to entry associated with writing something by hand highlights the care and consideration of those who take the time to do it—whereas anyone can jot a few words into a text field. Second, an unlined card provides an open-ended canvas for those who may struggle to use just words to tell a story. And the third and most practical reason for the postcards is that it presents a common constraint on all submissions: size and shape. This ensures that stories are kept to a digestible length and can be aggregated in a consistent and appealing way.

As stories are received, the SheServed team curates and posts select stories to its homepage, as well as sharing them out on owned social channels. As the movement gains traction and critical mass, the stories will be collected into a printed book and published. And to further diversify the audience, cards would be displayed at high-end art galleries, stereotypically the milieu of a demographic utterly removed from veterans' issues.

The SheServed proposal provides a research-backed blueprint for a new or relevant VSO to create real engagement around women veterans' issues, with stakeholder-tested messaging and branding to lead the charge. The public knows that it's ignorant about women in the military, and is ready to learn. And is it really so crazy to envision a future where people asked to imagine a veteran picture a woman—at least half the time?