We Love Reading is a Jordan-based NGO dedicated to establishing an informal "library" in every neighborhood in the Arab world by training local men and women to read to children. In Spring of 2016--after the Syrian war saw refugees seeking safety in camps across the border and streaming into Jordan en masse--they collaborated with IDEO.org's Amplify Refugee Education Challenge to launch Read a Book, Spark Imagination. This campaign is meant to educate Arab people--including those displaced--about the importance of reading aloud, and how a love of reading will help children build a bright future.

We designed a brand, a suite of training tools, a service model, and a partnership strategy that now allows the We Love Reading model to be deployed by any organization working with refugees across the Arab World. We also created an SMS-based monitoring system, which allows the We Love Reading team to track their impact and share information with reading volunteers, in an effort to connect their individual contribution to the larger movement.

It was important for us to brand a campaign that felt true to We Love Reading's roots as a grassroots movementbecause ultimately Read a Book, Spark Imagination is fueled by people's enthusiasm and individual actions. This also allows the movement to be adopted by multiple partner organizations, without trademarks and brands getting confused, or any barriers to adoption or roll-out--a critical point when we realized that the successful spread of the movement was dependent on partner NGOs in various refugee settlements launching their own local campaigns.

Our use of yellow was researched and intentional; it's a universally positive color that signifies friendship, optimism, and hope. It's differentiated from the common blue favored by NGO organizations, so it stands out.

The style of our illustrations evokes the traditional illustrations of children's books that the last generation of Arabs grew up with, made by artists famous for their social and political art. Our hope is that this new mark will speak to children, while also catching the attention of the adults in the camp.

We worked with two overall themes throughout. The first is hope: children look to the future and raise balloonswhile imagining and dreaming of their future lives, which establishes reading as a means to open up our imaginations and let them soar. The other is community: children are often seen in various genders, in multiples and groups, which lets them build empathy towards others and create bonds where none existed before.

Hand-drawn calligraphic elements in Arabic were included to elevate the illustrations and create a classic and lasting visual aesthetic. The word "Iqra'a" is seen multiple times as a symbol and a pattern across various assets. The word Iqra'a is the Arabic word for the verb "read", and is the first word in the Quraan. 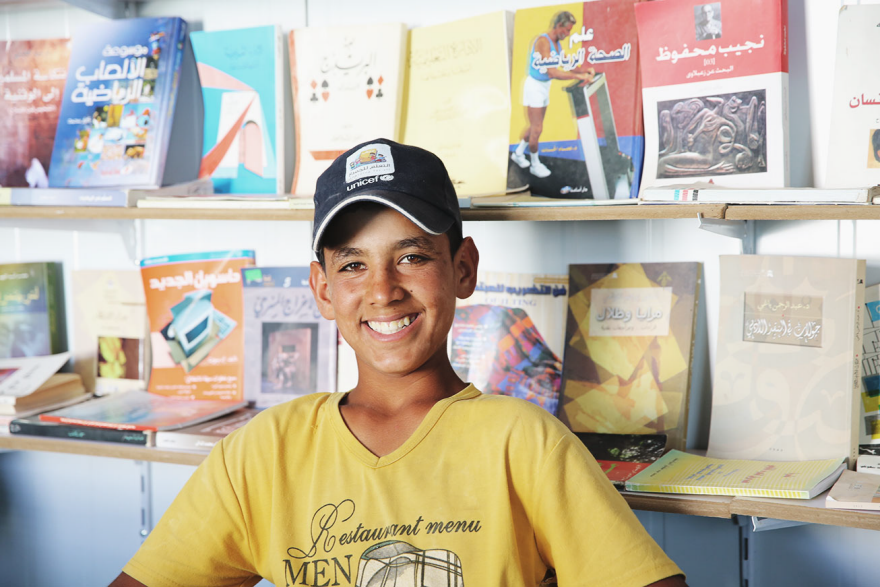 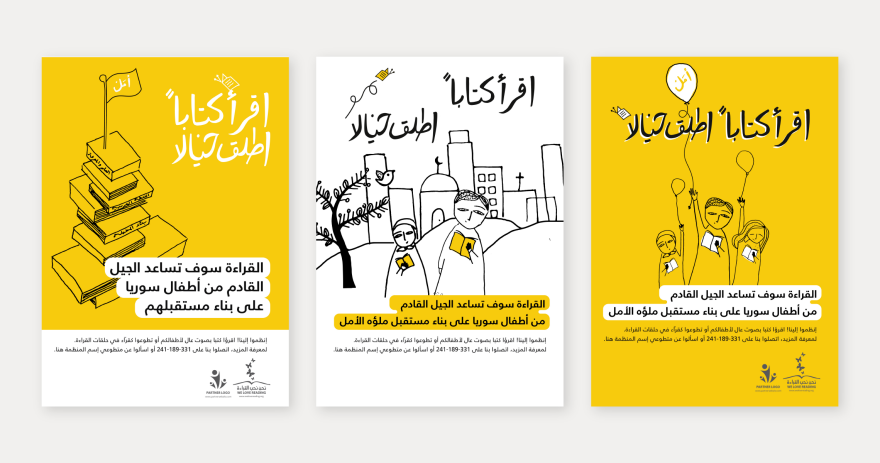 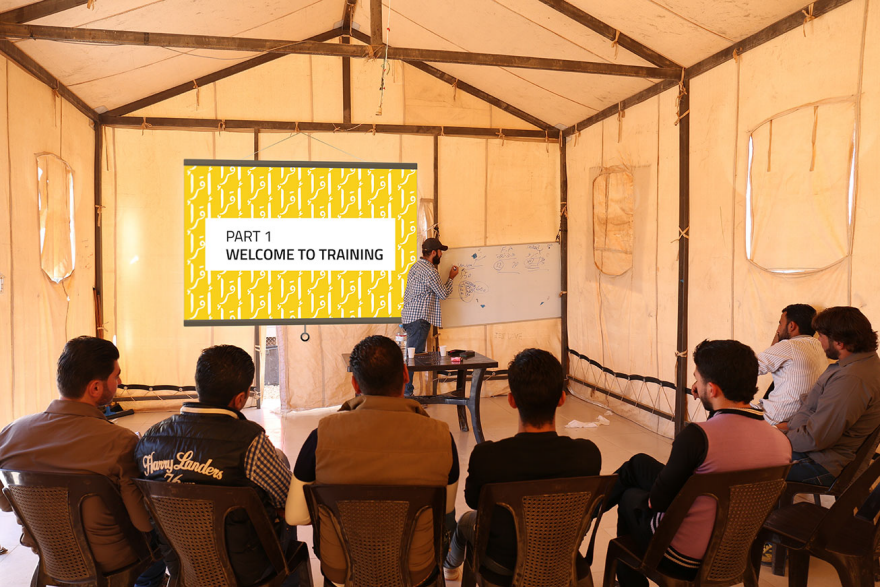 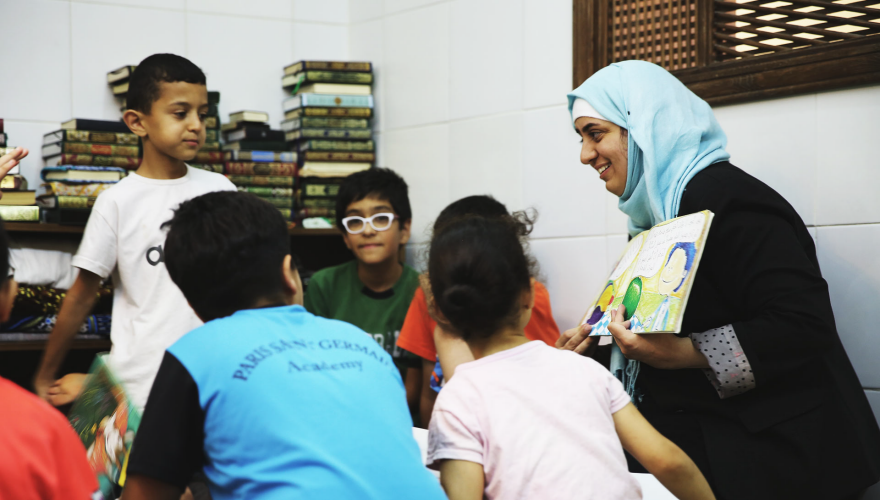 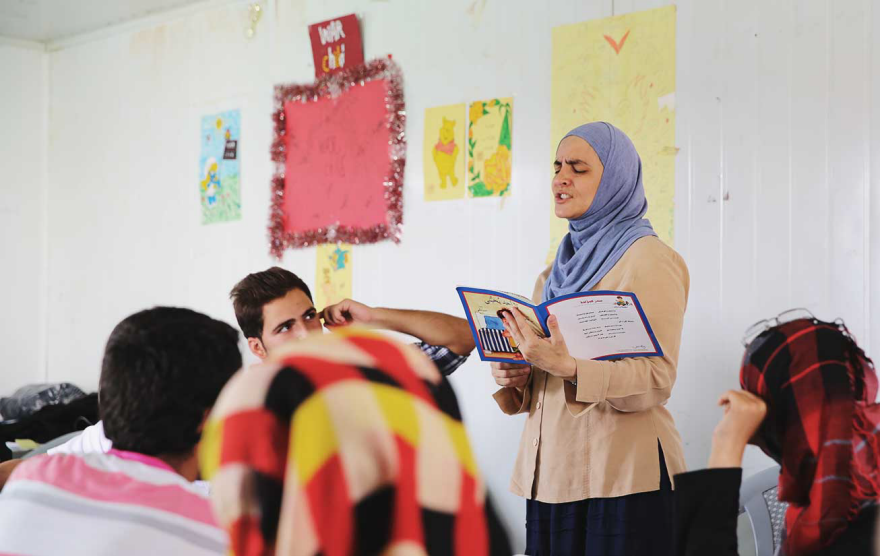 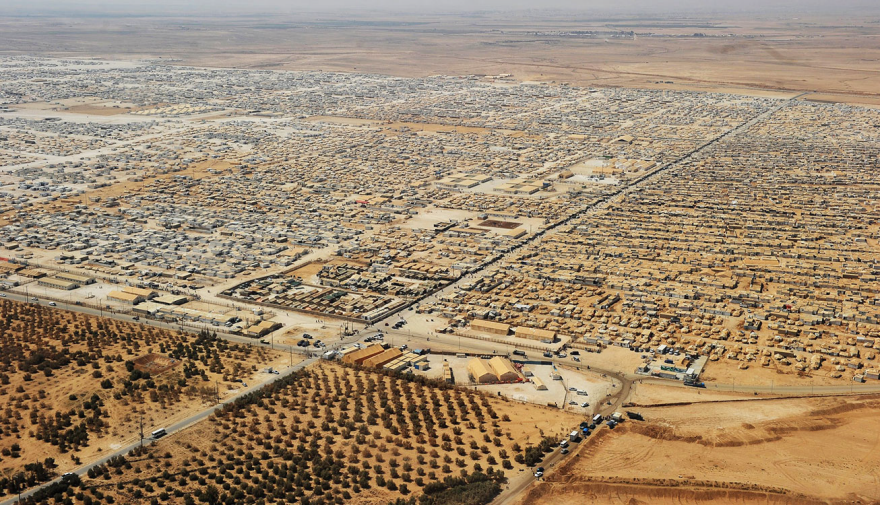 Jordan-based Rana Dajani was inspired to start reading aloud to children after noting that there was no local culture of reading for fun among kids in the neighborhood. One by one, she began to train other women to do the same, and before long these efforts began to form a movement she called We Love Reading, or Taghyeer. Since 2006, Rana and her team have been steadily training reading volunteers, and have seen their simple, community-based intervention take off beyond their wildest dreams—creating a vast network of informal "libraries".

When the Syrian war broke out, refugees began to stream into Jordan en masse, seeking safety in camps along the border. Recognizing the trauma these families had endured and the limited formal schooling opportunities available in these sites, Rana and her team knew they wanted to get involved, and began training reading volunteers in a new context—the Zaatari refugee camp.

They needed a more scalable approach to reach everyone they wanted to, so in 2015, Rana and her team joined up with IDEO.org's Amplify Refugee Education Challenge, hoping to effectively spread a love of reading to displaced children.

Now, We Love Reading has trained 140 reading ambassadors, who read to more than 2,000 children each week across three Jordanian refugee camps. We Love Reading has also partnered with UNHCR to try out the program in Ethiopia with South Sudanese refugees. In early tests, the program's community-based model has shown to be quite effective, especially in reaching young girls, who are often left out of traditional education initiatives due to cultural limitations.

The uploaded video was created to use for training purposes for prospective reading volunteers; it communicates the benefits of reading to children for pleasure.