—Prototyping ways to integrate design into other disciplines

Testing and prototyping ways to establish cross-disciplinary collaborations through faculty research projects, I used a model of symbiotic relationship found in nature to investigate possible intersections of design with other disciplines at the university where few cross-disciplinary projects existed. Symbolically, the beautiful collaborative processes such as lichen and mycelium found in nature become visible through this project and in turn inspired more symbiotic relationships between faculties from different schools. Overlooked project consists of several initiatives:

1. Live instructions-performances and educational events such as nature walks, bread-making, lichen science exploration and art-making in the gallery.

3. An installation Mycelium Running about mycelium-based products grown in the lab and the educational video.

Approaching this project as an experiment I identified possible points of connections, first by dipping into other non-design classes and later through participatory design, design and science collaborations, gallery installation, programming, the use of non-classroom spaces and outdoors.

The installation in the gallery was the most visible part of the project. Other methods used were: participatory design (both facilitated in advertising class taught by communication professor and through installations on campus), cross-disciplinary events such as BioBlitz with design and biology students, access to biology lab, and collaborations with advanced photography students, and more. 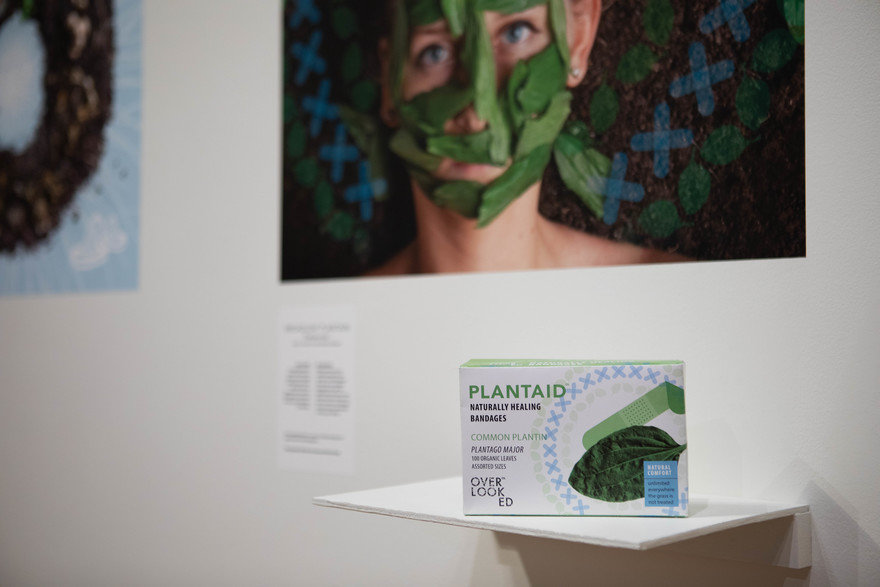 Plantain The Broadleaf plantain is used as a healing bandage and beauty mask in this photograph. Elena Volkova 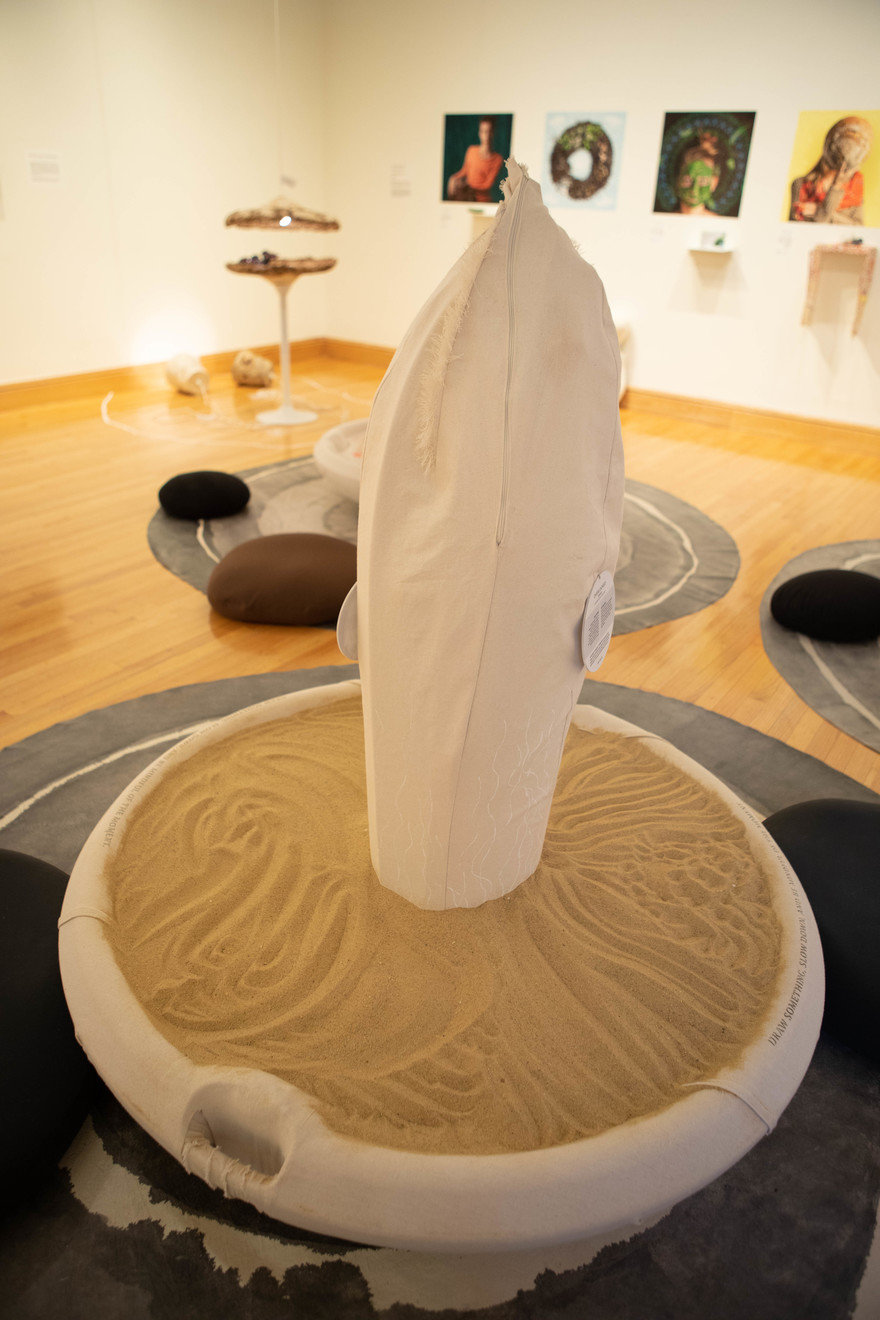 Overlooked Tempos Contemplative Sand Box OVERLOOKED TEMPOS invites you slow down and be mindful of this moment. Elena Volkova 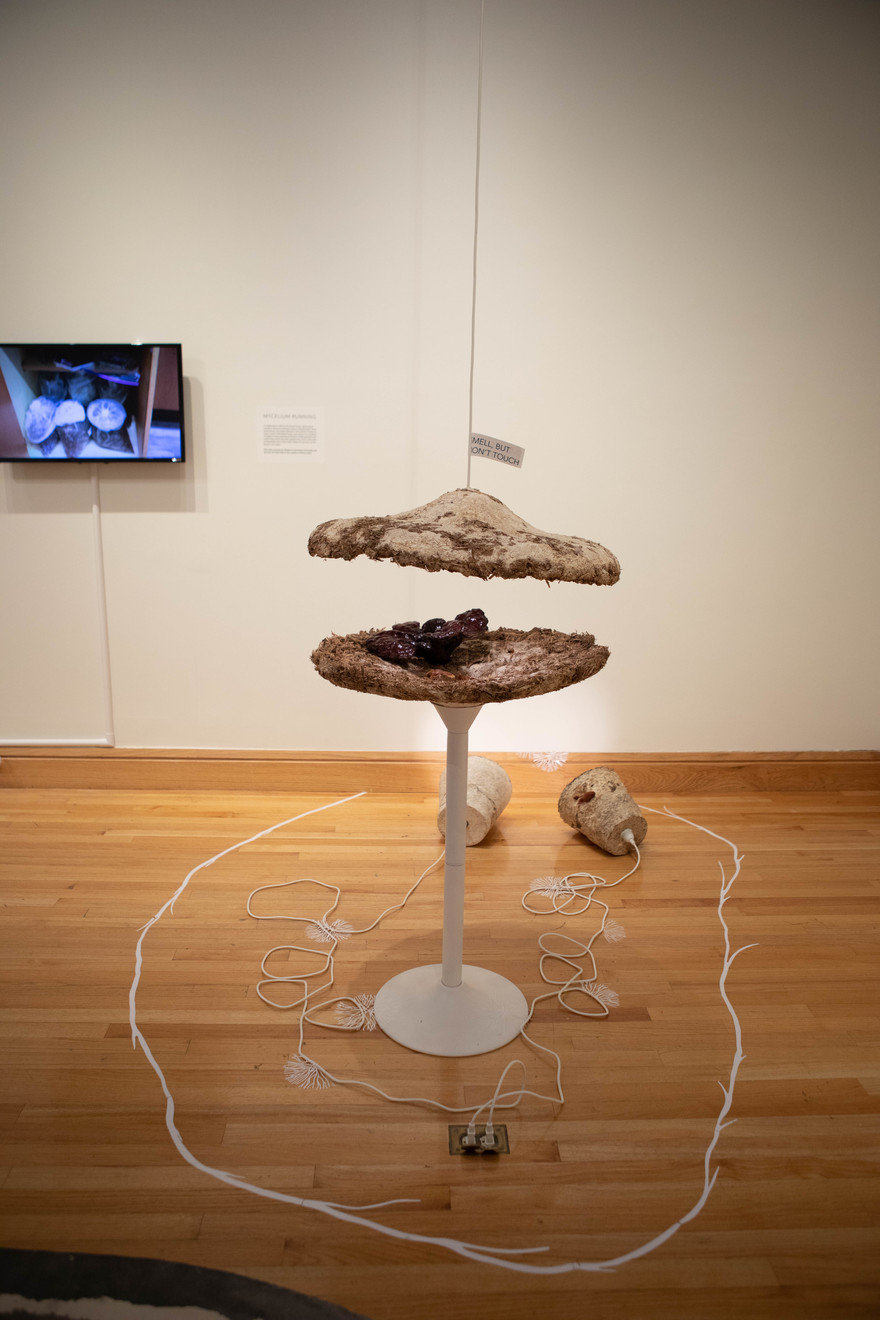 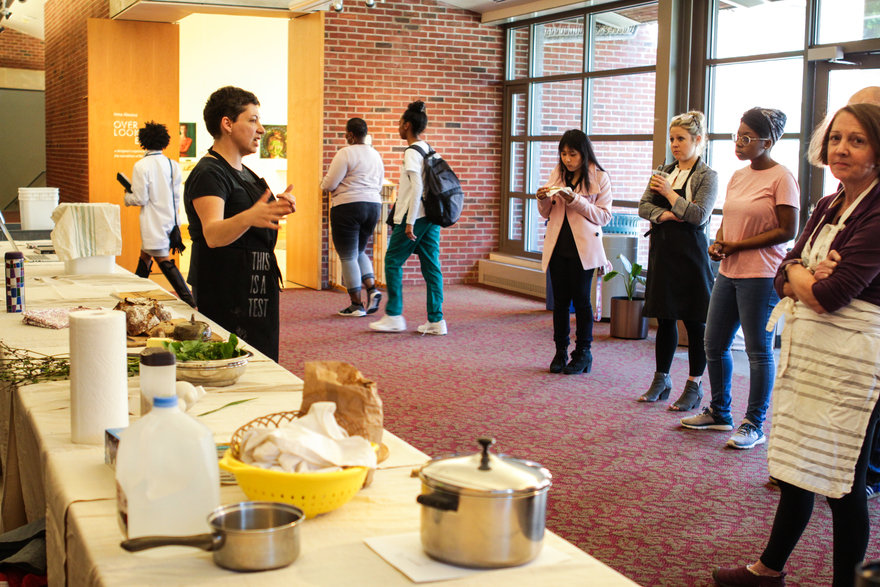 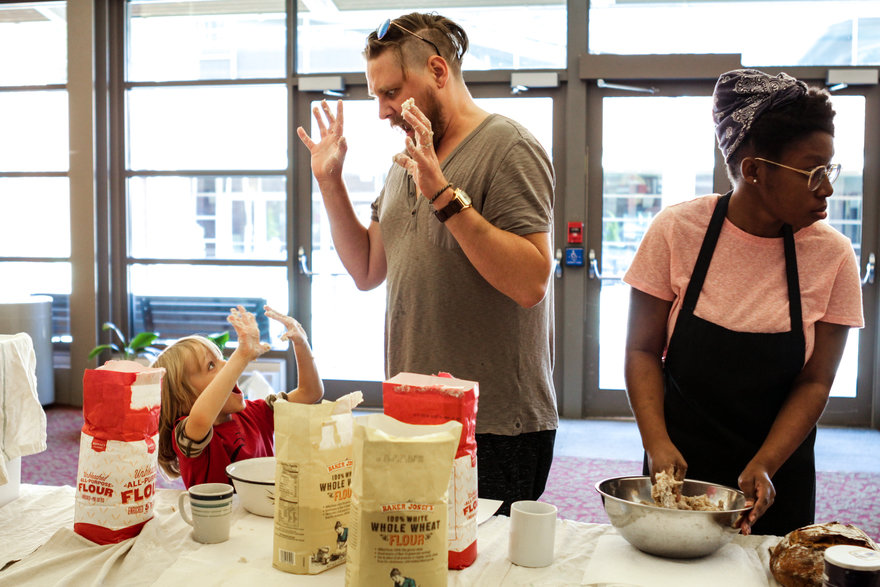 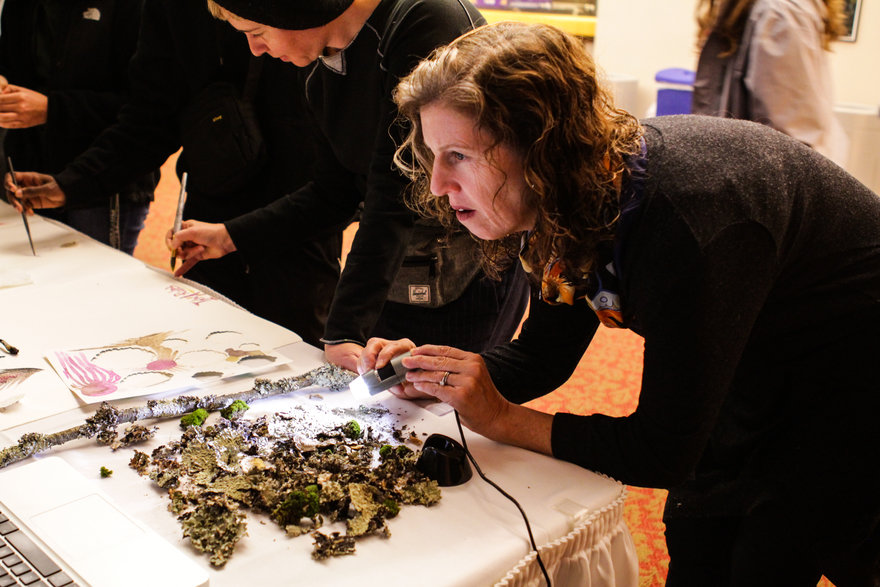 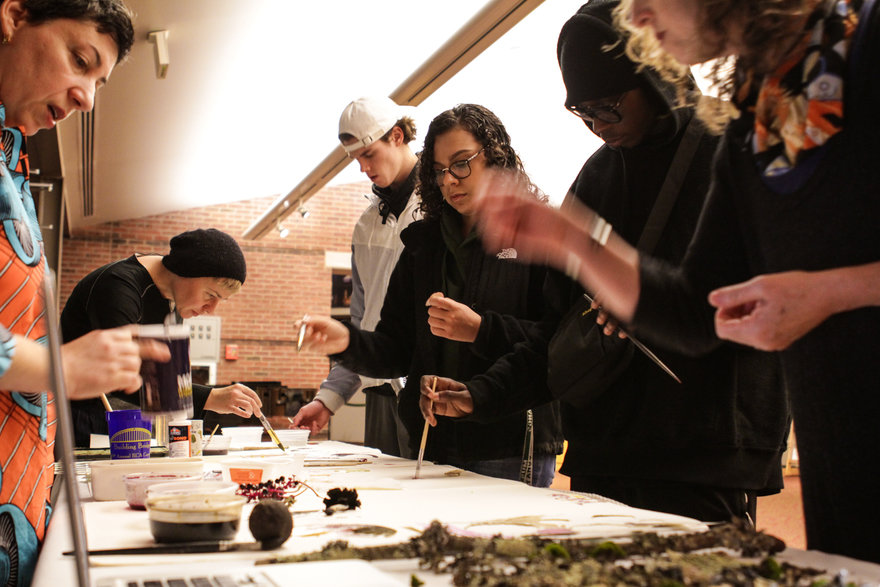 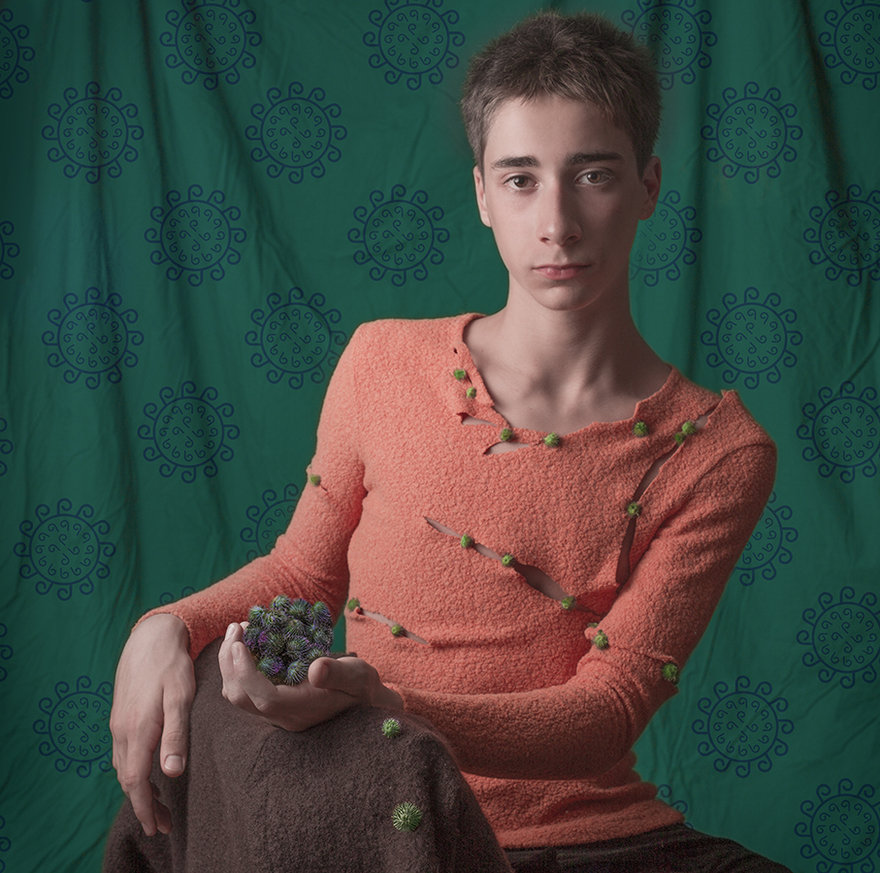 Greater Burdock
(Arctium lappa)
Identity: The original Velcro Burs are used as tailor's pins to connect parts of a garment. Can you think of other everyday objects that were inspired by nature? Elena Volkova 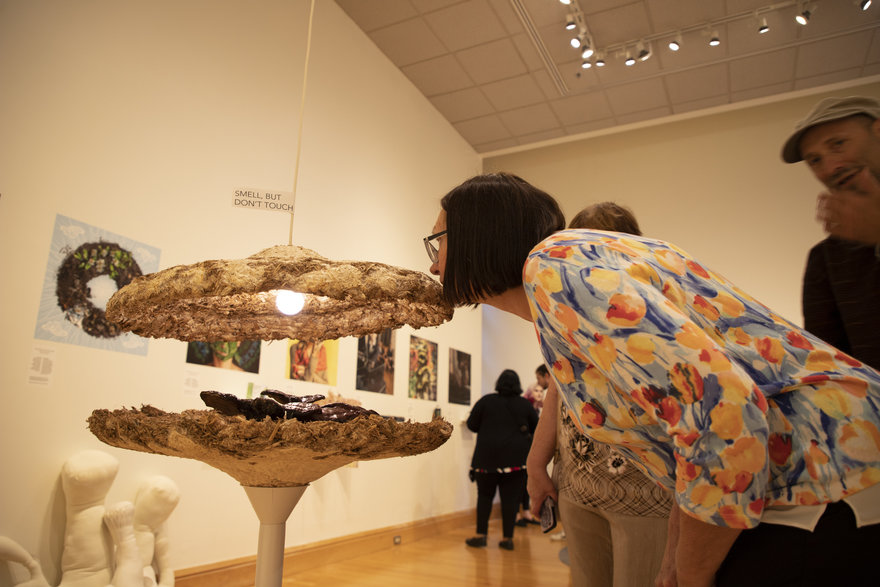 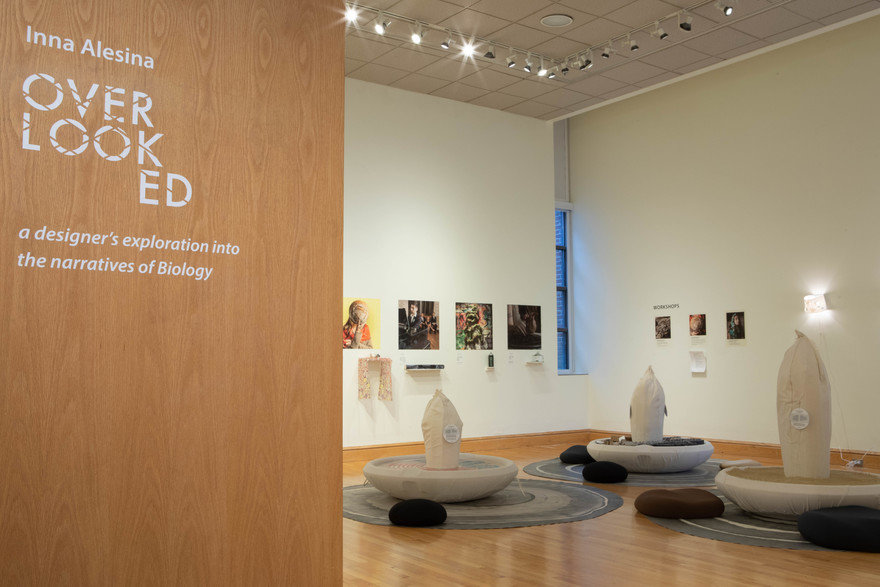 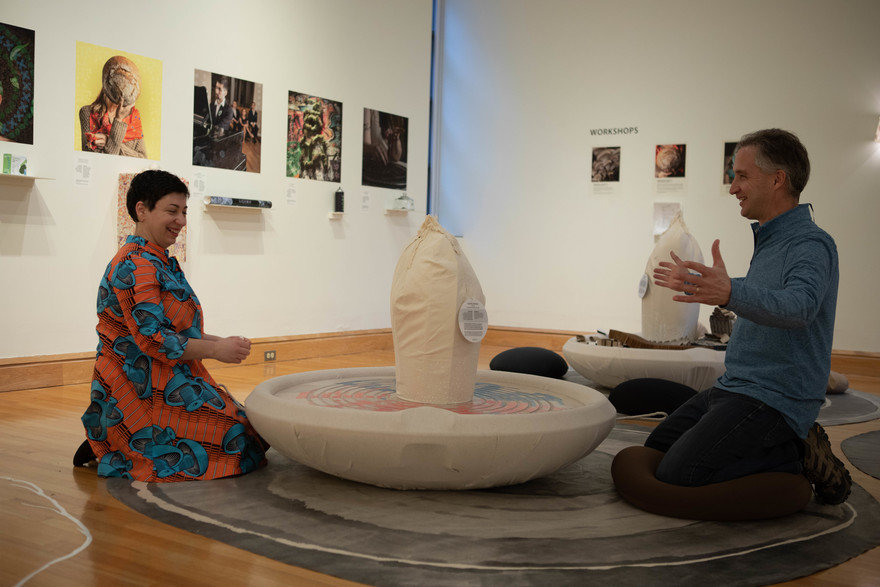 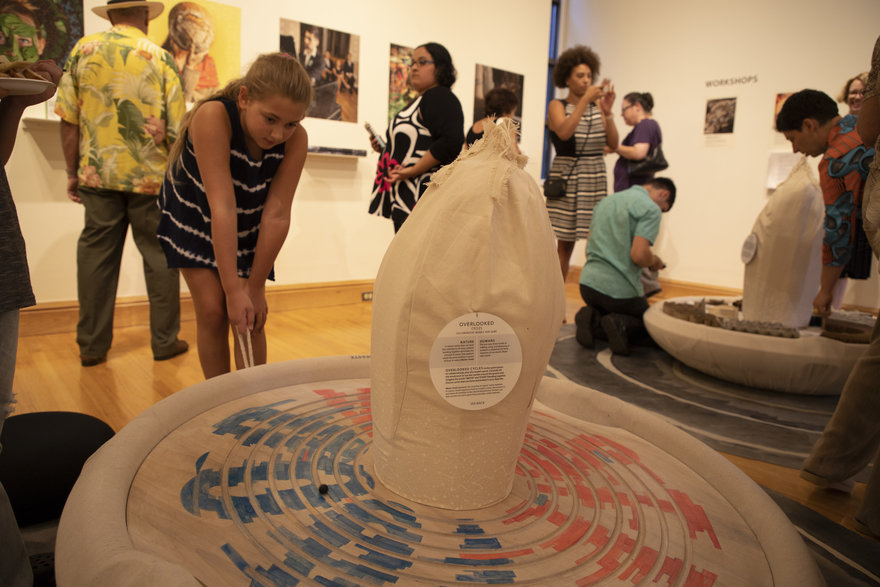 OVERLOOKED CYCLES OVERLOOKED CYCLES invites participants to collaboratively play this marble game. Work carefully to run the marble around the groove and imagine the words "WASTE" and "FOOD" blending together. Discuss cycles that you have overlooked in your daily life. Andrew Boone

—prototyping ways to integrate design into other disciplines

Designers should recognize "interdependent relationships among people, places, things, and activities in a complex system;" (AIGA, 2017)

Using a nature's framework of symbiotic relationships, project "OVERLOOKED" engaged students and faculty across such disciplines as photography, biology, digital media, graphic design, and advertising. Generated work was featured in a gallery space and was accompanied by multiple workshops and programmed events ranging from nature walks, sourdough bread-making, and lichen art exploration. Exhibit itself had many participatory stations where public was asked to "blend" waste and food in a marble-run game to learn about circular economies, reflect on the overlooked connections by connecting the dots in another participatory station, and look under the microscope at nature's structures such as polypore fungus spore surface and imagine what human-made structures can benefit from nature's engineering. "Mycelium Running" installation shows the process of growing shapes using fungi mycelium and local straw.

In recent years we have observed an emergence of multidisciplinary programs and experimental initiatives that brings designers and scientists together. Many design schools established some sort to interdisciplinary labs and maker spaces to help collaboration between science, engineering, art and design with goals to address complex issues. What makes these new initiatives slightly different from other maker spaces is an addition of living materials and newly recognized need for engaging in "organic systems ethos" (Hugh Dubberly "Design in the age of biology: Shifting from a mechanical-object ethos to an organic-systems ethos") and their even bigger focus on sustainability. Looking at the university as a system to identify opportunities for collaborative lab spaces and projects, I initiated a faculty research project to experiment with already existing techniques of mycelium-based materials. A year-long collaborative project tapped onto the expertise of biology faculty and laboratory services for bio-material experiments and hands-on workshops. Getting access to the lab and greenhouse spaces was not only critical to this project but also an exciting step for a designer. While working on multiple components of the project I approached it as an experiment, both literally in the lab and as an experiment on different ways to integrate design into other areas at the university.

After initial experimentation with bio materials, the integration of design had to be facilitated by scheduling groups of students from different disciplines to explore nature together. One example was a nature walk with students from Biodiversity and Digital Design classes. This was not a co-taught class but a cross-disciplinary event that worked with both classes scheduled together. Biodiversity students conducted a BioBlitz while Design students found objects in nature and used them as patterns for design exercise. Both groups worked together and later reflected on the role of the species in the ecosystem, both from human and non-human point of view. Dipping in to Diversity of Life class to look at SCOBY (Symbiotic Culture Of Bacteria and Yeast), sourdough yeast and other kombucha organisms under the microscope created opportunity to show a new perspective to students on why fungi are important and worth learning about.

I was able to dip into more classes, by working with advanced photo faculty and students, by first, creating project briefs, offer critiques and later assisting in photoshoots. For the project "Overlooked Species Zoo" photography students worked with speculative scenarios where nature reversed biomimicry rules and borrowed human tools of advertisement and marketing to advance nature's agenda. This was an opportunity to engage students in critical design as Anthony Dunne and Fiona Raby mention in the book Speculative Everything, "uses speculative design proposals to challenge narrow assumptions, preconceptions, and givens about the role products play in everyday life." In this series, students gave organisms the stylization of a magazine advertisement to showcase their important—but often overlooked—role in the environment. Each work juxtaposes an organism with everyday objects in an unexpected way to create a surreal scenario in which nature has borrowed human ideas and environments. One example is a portrait of a burdock plant where seed pods of burdock "pretend" to be Velcro to show their usefulness to humans reversing a most familiar application of the plant as the inspiration for the invention of Velcro by Swiss engineer George de Mestral in 1941. Broadleaf Plantain, which is both a common lawn weed and is used throughout the world as a medicinal plant, presented as healing first aid antiseptic bandages.

Informal survey of the biology students and faculty showed that students were inspired to see how biology relates to design which gave students a new perspective. Mycelium hyphae depicted in the exhibition provided a great visual for students to understand their role in plant nutrition and more. In the future we plan to have bio students to come up with the biology behind what they were doing (bread-making, fungi, gluten) and design students will collaborate to create new scenarios and shapes of fungi to grow.

Reflecting on this experience I recognize that student's engagement was achieved because of the design integration and collaborative learning while engagement of the public in the gallery and at workshop was because of multiple participatory aspects of the installation.

Symbolically, the beautiful collaborative processes such as lichen and mycelium found in nature become visible through this project and in turn inspired more symbiotic relationships between faculty from different schools. This dipping in initiatives served as prototypes for future interdisciplinary classes where design can use alternative spaces such as science labs, galleries, outdoors, photo studios, events and more. Starting with one project per semester and being flexible, I hope more design faculty will be interested in finding ways to bring design into other disciplines and other disciplines into design.

Overall the installation was the most visible part of the project, but the actual work is still happening in the classrooms and in the lab.