Atmosphere is an immersive installation that amplifies the spatial qualities of light, disorienting the relationship of vision to reality in order to bring us to the otherworldly space between. The exterior of this 30 ft inflatable structure is stark white with hexagonally patterned black seams, its looming alien form glaringly reflects the sun and casts a stark contrast to the riotous color that blankets our world. That bright exterior is soon inverted as the work's central chamber is only accessible by darkened tunnel. Upon entry the building's fabric walls act as a filter, alternately blockading and passing daylight through a network of polygonal panels and transparent seams. In this way day is made night as the ambient radiance of the sun is carved into a gorgeous steccato field of hexagons, triangles, and lines that cast an enchantingly dissonant rhyme to our night-bound stars. The sun passing through these geometric constellations cuts through the black room as sharply defined shafts of light that look phantasmally solid, as if the open space was actually a luminous maze of unsteady walls. Just like the shadow on a sundial these planes of light move with the sun's shifts through the day and offer a direct experiential engagement with the physical processes underpinning our systems of time. 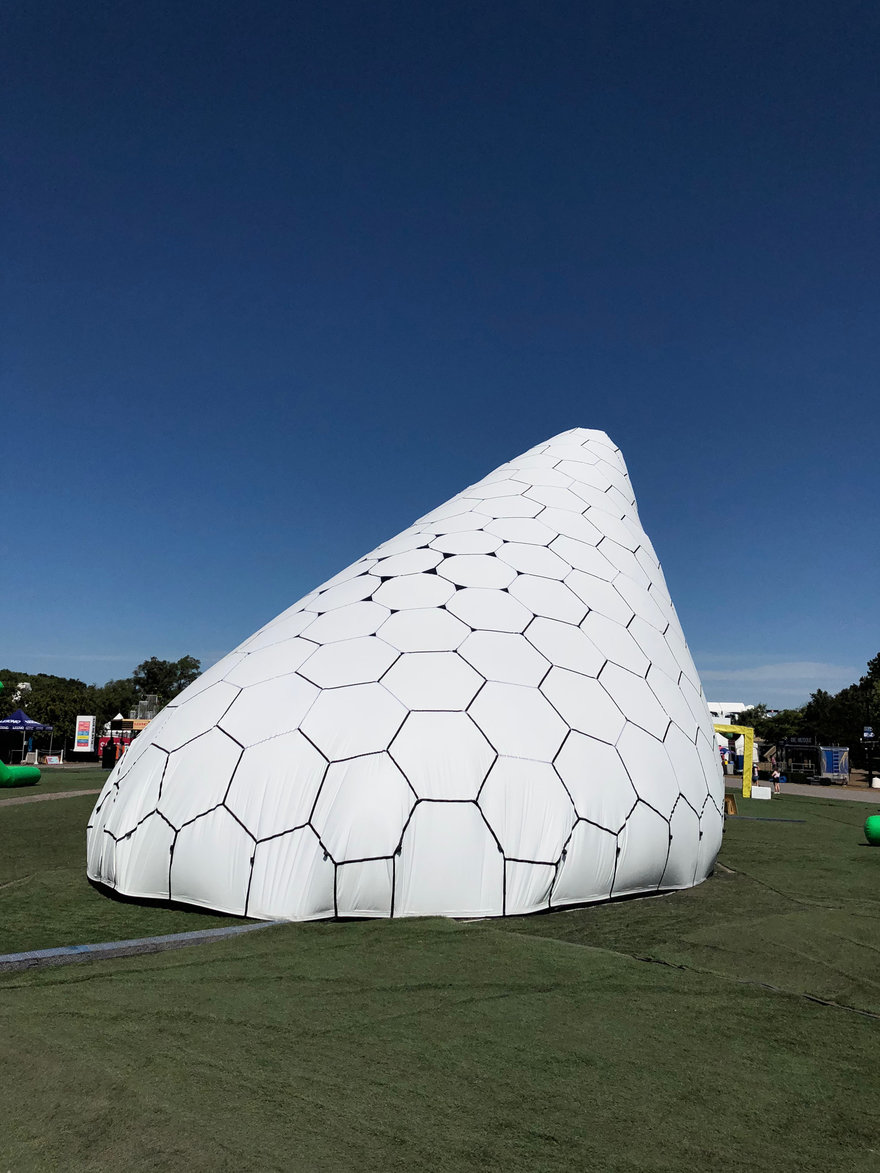 Exterior From the outside, there is no hint to the inside experience. 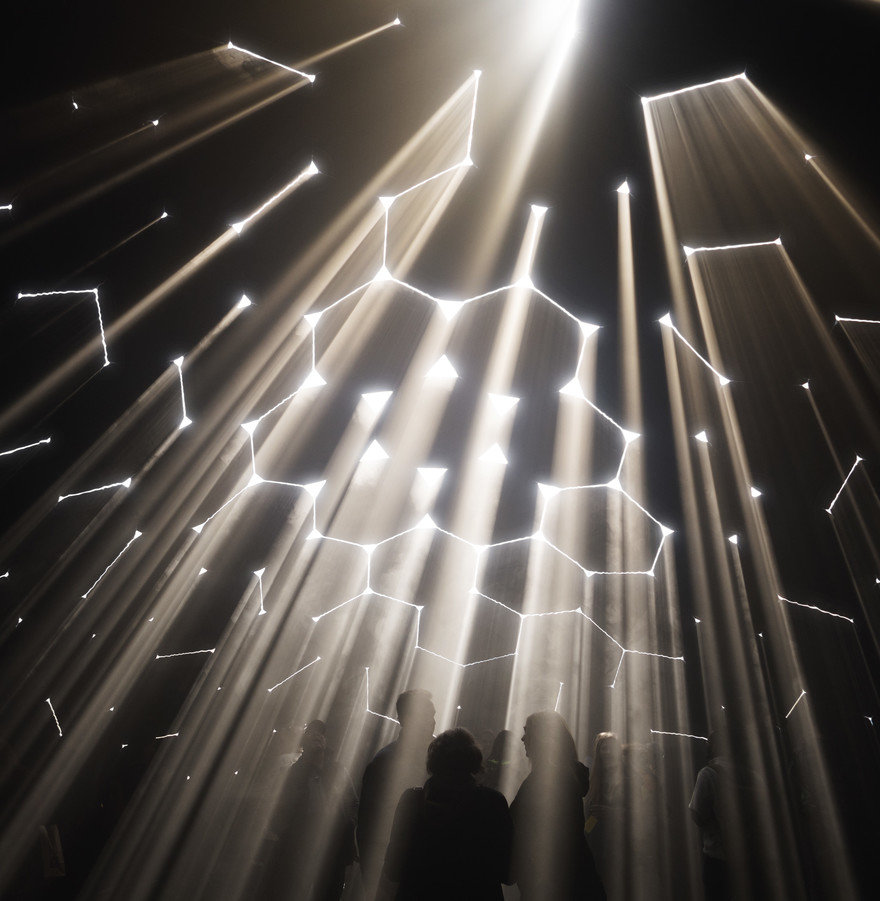 Interior Holes on the membrane act as a filter, amplifying the spatial qualities of light. 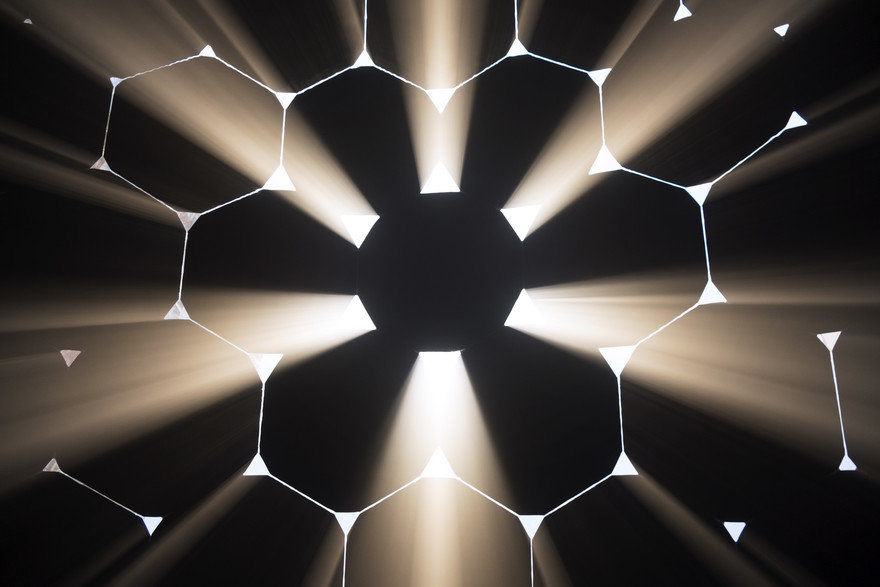 Center The center of the pattern is a colonnade. 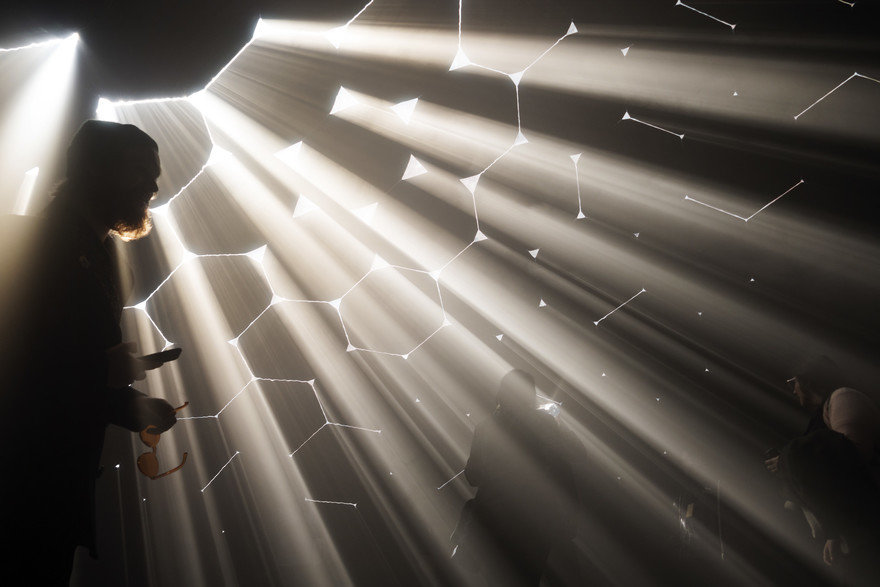 Within the Rays The light has a sacred quality. 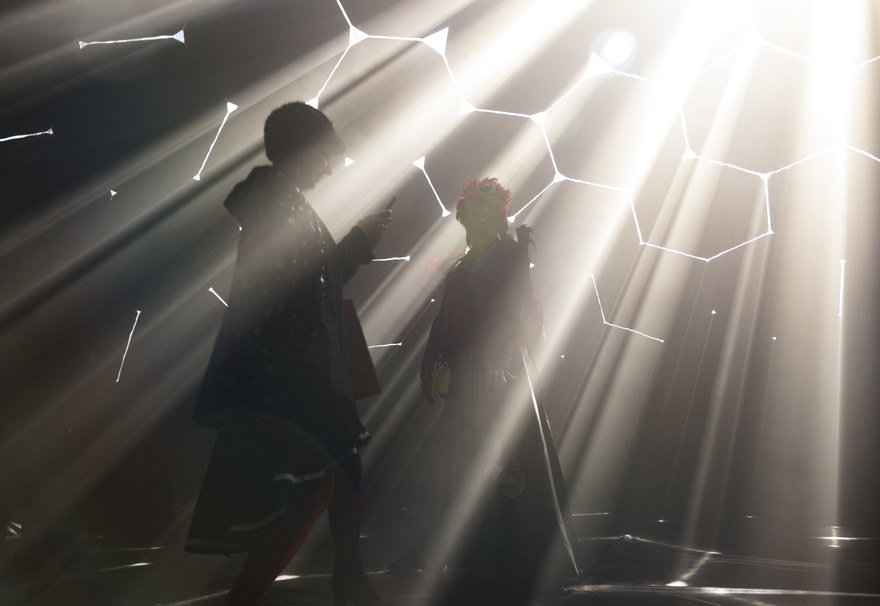 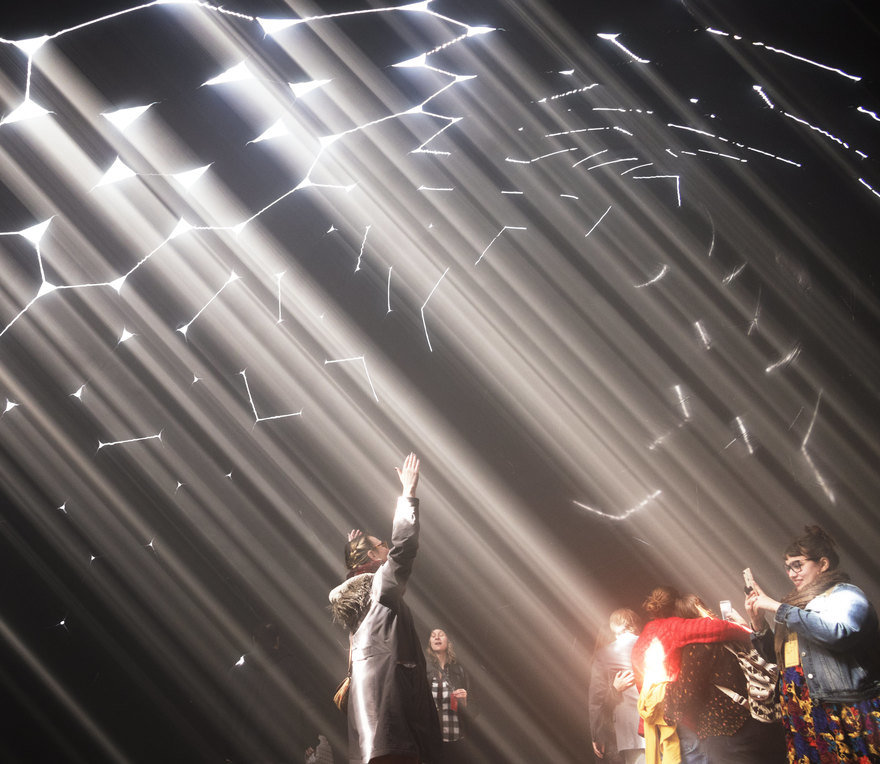 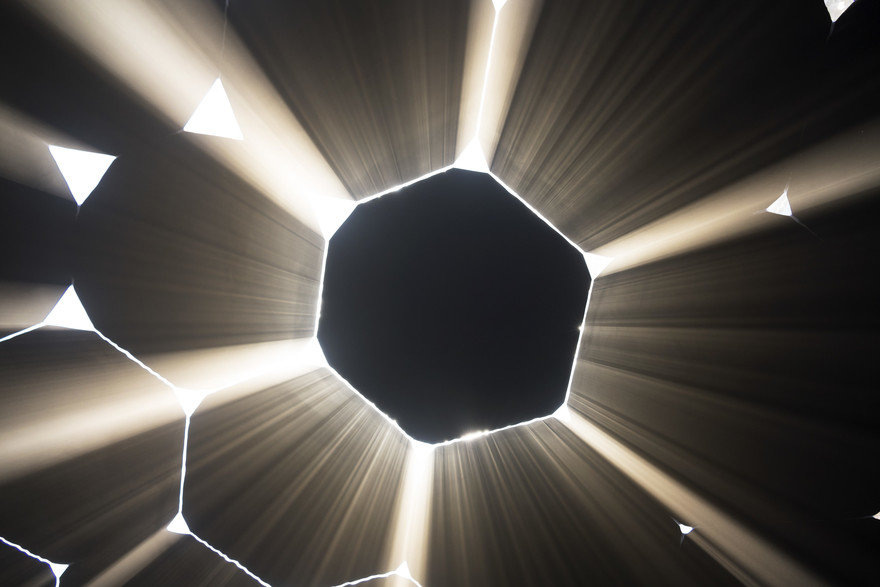 Patterning A hexagon of clear seams creates an enclosed space of light. 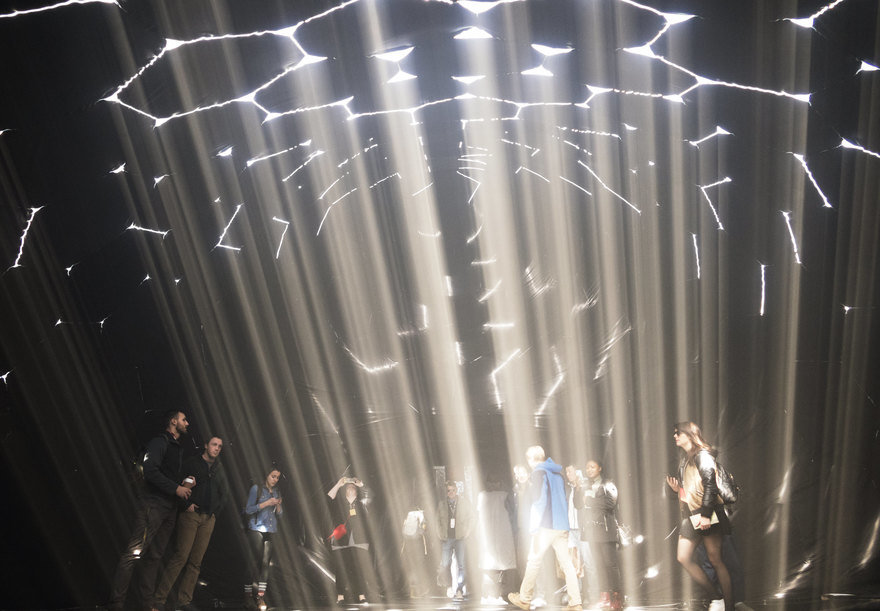 Physical Light Fog is added to catch the light as it passes through the air. 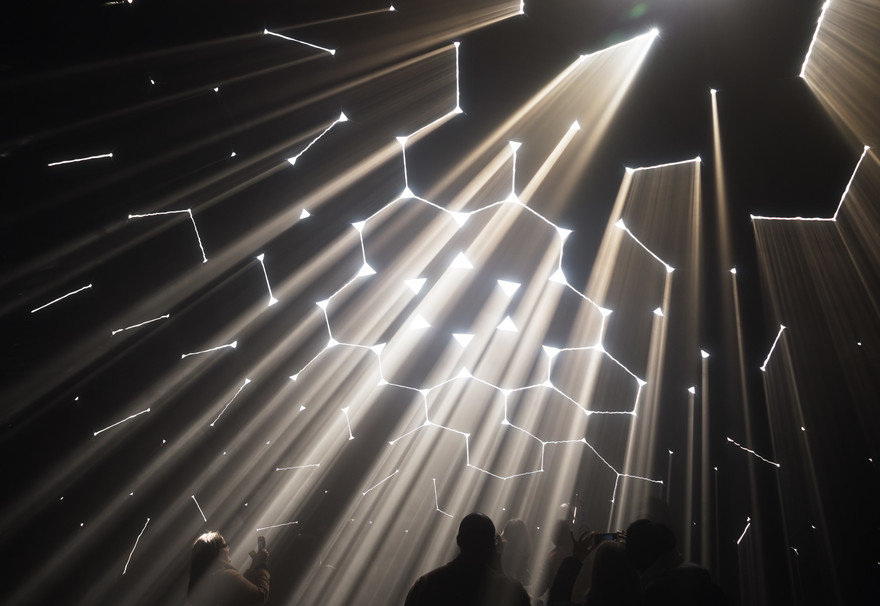 Angle of Light Rays of sunlight point directly at the entrance. 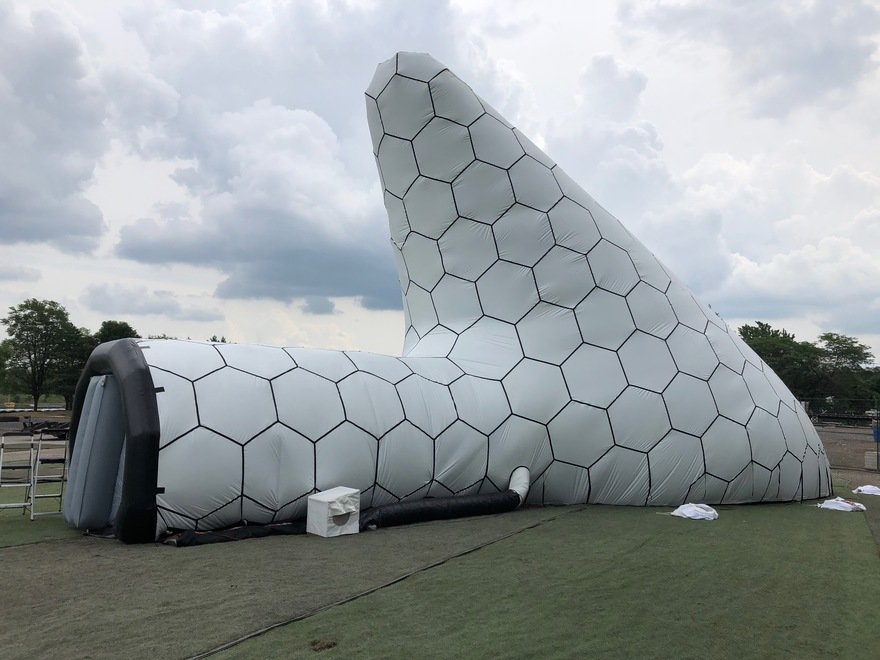 Our studio has always been driven by an awe of natural systems and a collective desire to generate new types of experiences around them for people to enjoy. This project began by exploring the idea of atmosphere as an invisible substance that surrounds and connects all of us, acting as a medium between both human interactions as well as our interaction with the environment. We wanted to make some of these invisible forces tangible and approachable through our installation, allowing people to recontextualize the everyday qualities that shape our interaction with the world around us.

As a studio that designs and fabricates inflatable structures, we constantly use air as a medium to create space, but we can never actually see it. The initial idea behind this project was to utilize fog in a pressurized space to act as a medium for people to observe the light around them in a controlled manner. We made our first mock-ups out of opaque black plastic film and filled them with fog. Standing inside we poked holes and made slices in the membrane to allow light into the space. We were struck by how solid the incoming planes and lines of light seemed when held by the fog and settled on applying this phenomenon to a larger scale.

The parallel nature of sunlight played an important role in our formal considerations. We wanted our design to have a direction and orientation that highlighted this interaction between the envelope and the angle of the sun. Drawing inspiration from ancient sundials, we chose to make the overall form an angled cone in order to maximize the surface area within a given day that would be hit by sunlight when facing south. Over the course of the day, as the sun's angle changes, so do the light projections inside. A fifteen foot long tunnel connected to the main chamber acts as a transition space into the experience and gives people time for their eyes to adjust before experiencing the light.

To keep the parameters guiding the templating relatively simple, we chose to pattern the membrane with uniform polygons, which allowed us to isolate the seams and vertices of each panel as potential areas for light to enter into the space. The geometric configuration of these polygons also generated the overall topology of the form. The entire envelope is made up of 200 hexagons, 4 pentagons and 4 heptagons, which made the piece much easier to produce from a finite set of elements. The result is an intricate mosaic of opaque panels that act as a sieve for sunlight.