Citizen Spaces: Experiments in Reclaiming the Right to the City

The physical and economic growth of large cities under late capitalism has been driven by the profit motives of the elite class of financiers, developers, and global scale wealth. This urbanization under capitalism can often eclipse broad and systemic efforts to consider the quality of life of all citizens. The rapid physical transformation of cities for profit can lead to increased lack of affordability, displacement of marginalized people, eradication of historically vibrant cultural zones and privatization of public space. The increased consumerism caused by capital-driven urban development can result in pacification of potentially revolutionary communities, cultivating an individualistic rather than collective culture. Citizen participation in action that transforms public space for community benefit can help re-establish these lost social bonds and promote collective empowerment.

The "right to the city," is a concept introduced by French Marxist philosopher Henri Lefebvre in 1968, in response to the condition of urbanization under capitalism and its compromising effect on citizens' rights. Drawing on Lefebvre, contemporary anthropologist David Harvey defines the right to the city as "a common rather than an individual right… [that] inevitably depends on the exercise of a collective power to reshape the process of urbanization." My thesis research, undertaken at Emily Carr University of Art + Design, aligns with Harvey's definition of the right to the city and provides examples of grassroots participation and art and design activism that contribute to collective empowerment through the transformation of urban public space and creation of "citizen spaces" fostering participation, dialogue and collective exchange.

My thesis addresses this research question: How do initiatives of grassroots participation and art and design activism help citizens reclaim their right to the city and promote localized collective empowerment? To explore this inquiry at the community level, I launched experimental projects in four cities. I undertook exploratory research to get a broad sense of currently active grassroots participation and art and design activism initiatives before reaching out to selected community groups to collaborate with on experimental projects, outlined in detailed case studies. Through this work, I explored the reclamation of privatized space for public use in Madrid, Spain; increased neighbourhood safety in Kingston, Jamaica; protection of urban green space in Montreal, and the trend of temporary interventions, or "placemaking," in Vancouver.

As a final experiment of my master of design thesis, and the focus of this award submission, I initiated a public space activation in partnership with the Vancouver Design Nerds Society called the Vancouver Bubble. Through this experiment we exercised our own right to the city, transforming an underused site into a citizen space by creating opportunities for dialogue and youth engagement within a temporary intervention of design activism. A simple, replicable, inflatable design, the Vancouver Bubble as a platform and site for engagement supports community programming of all kinds. The installation has since "popped up" in additional sites in Vancouver, with intentional programming designed to foster community engagement, dialogue and connectedness that may lead to empowered collectivity and downstream positive social change. 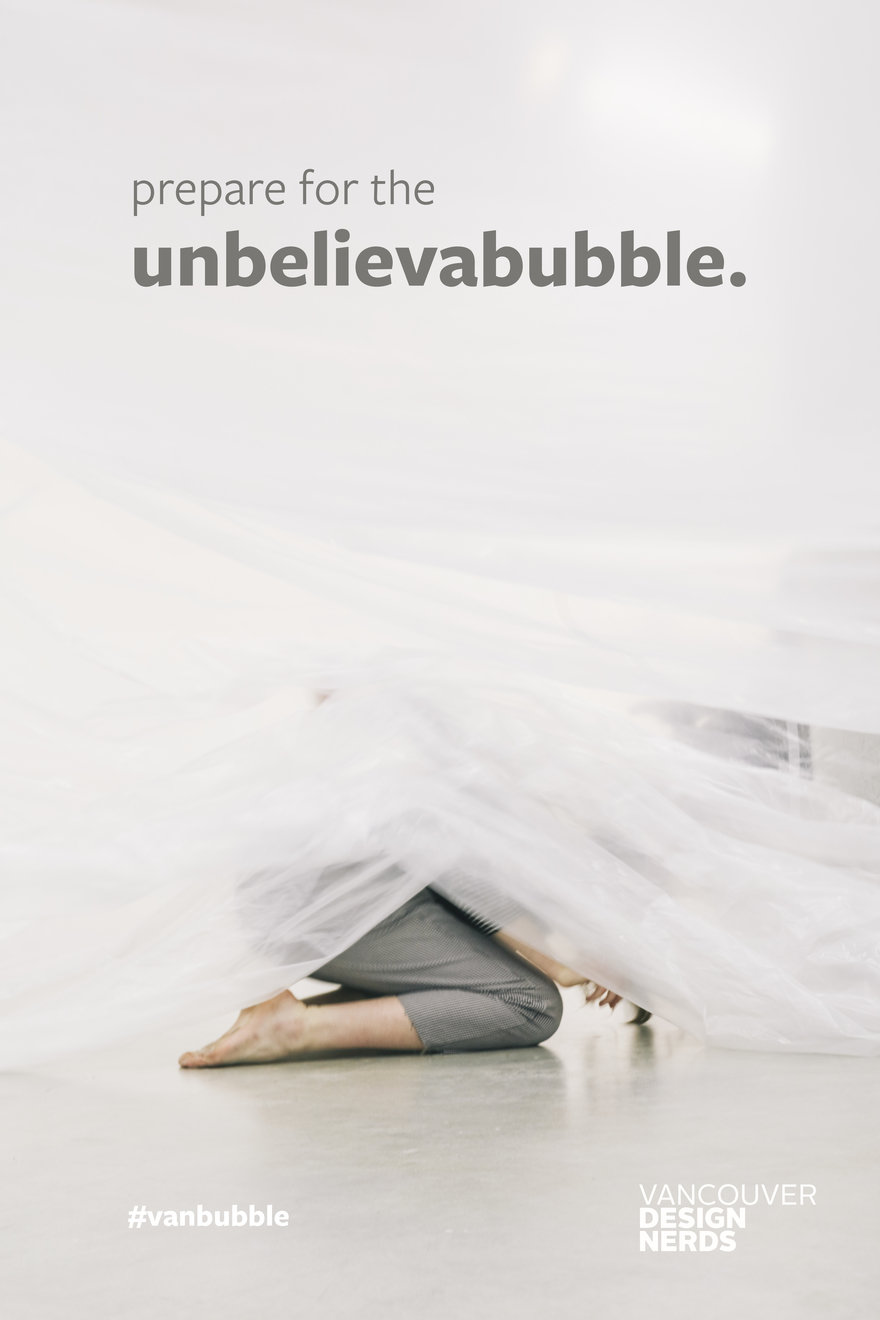 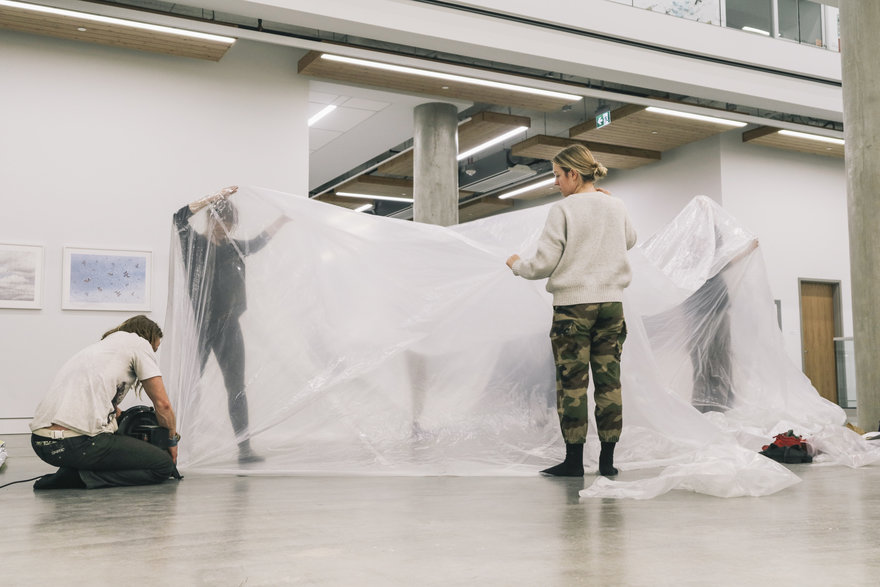 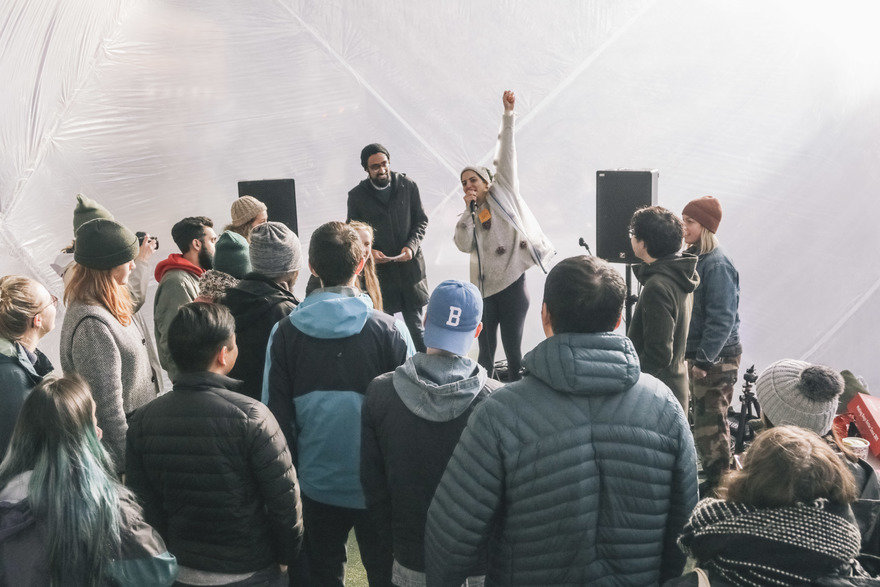 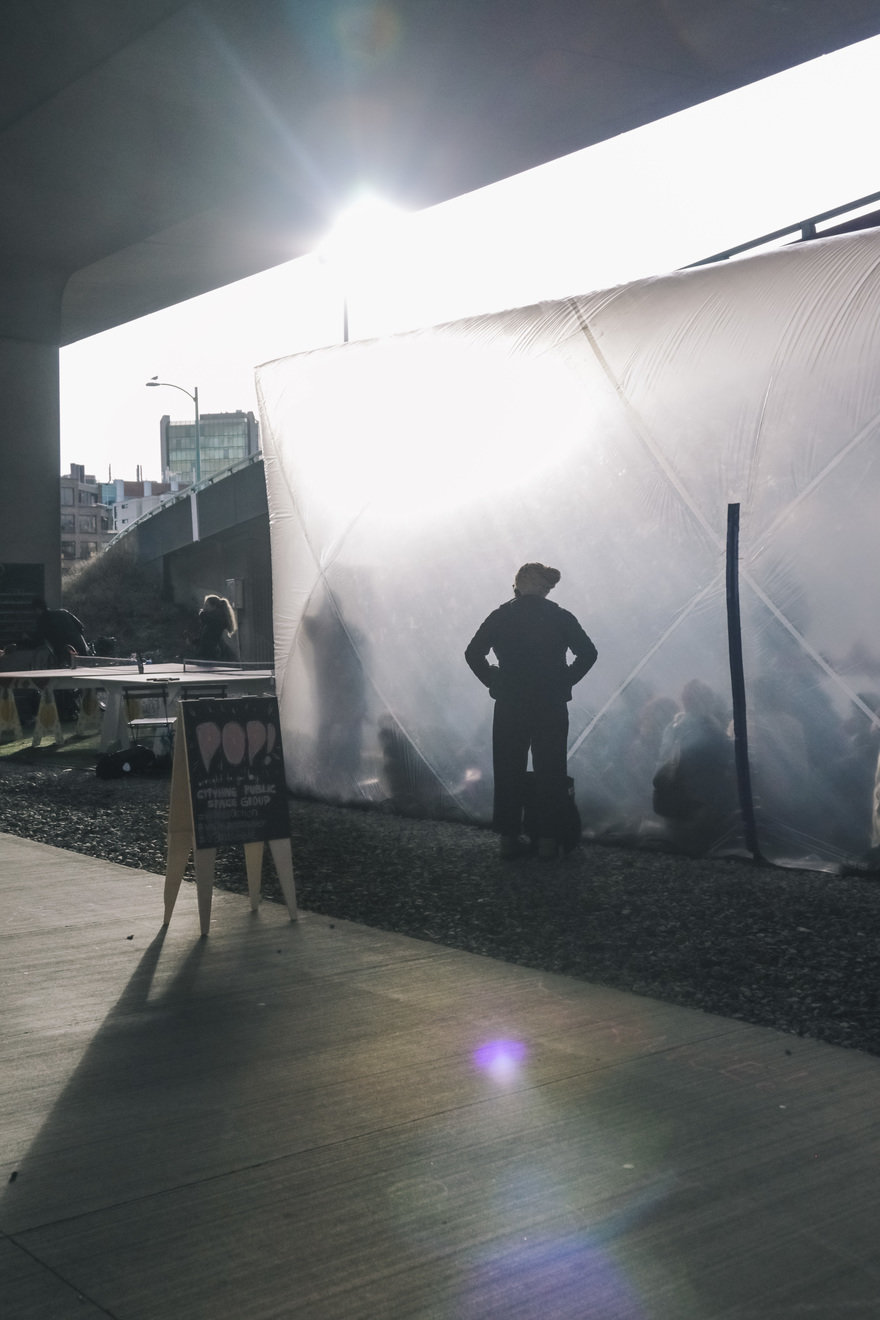 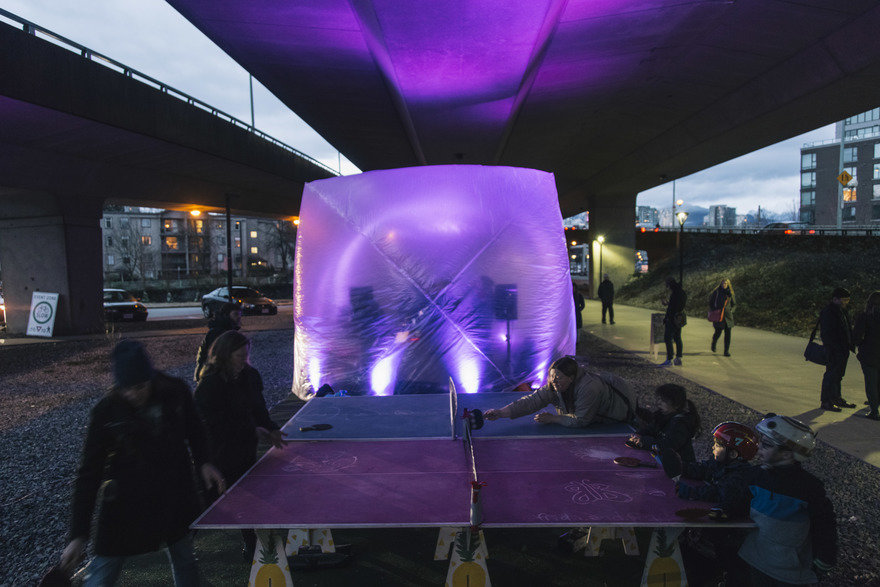 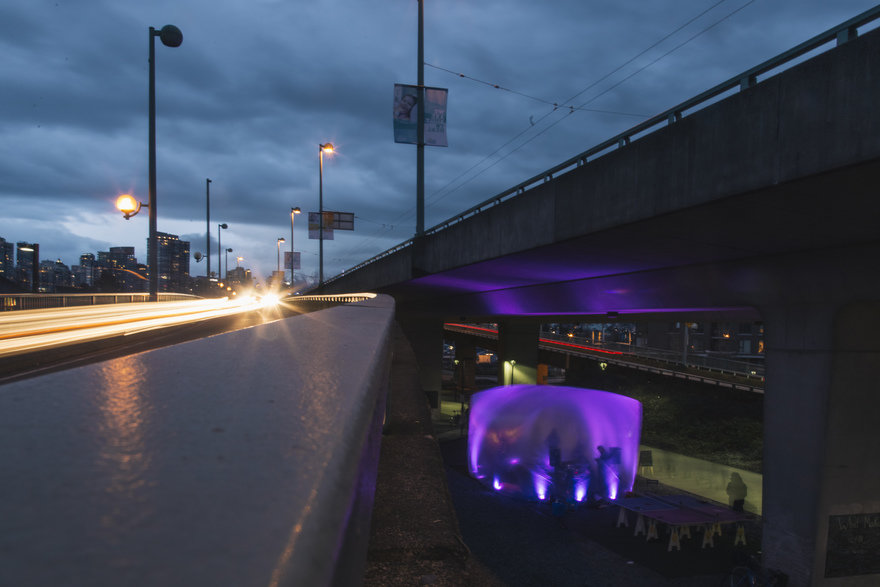 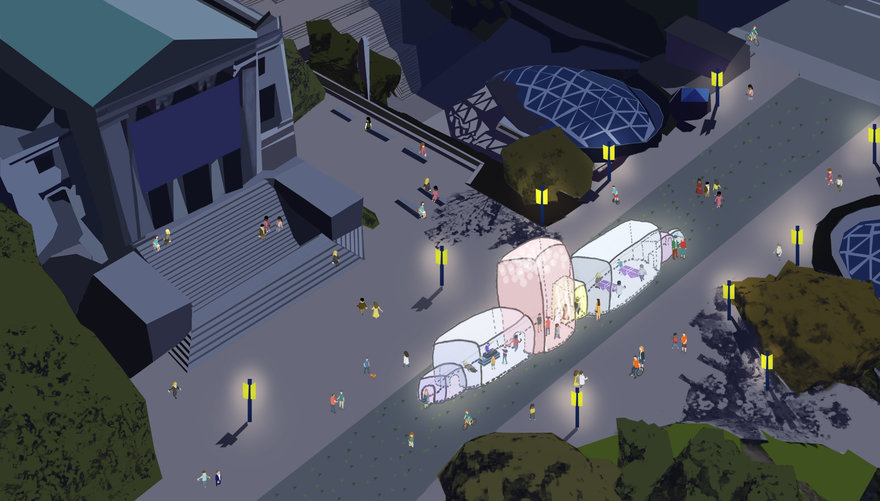 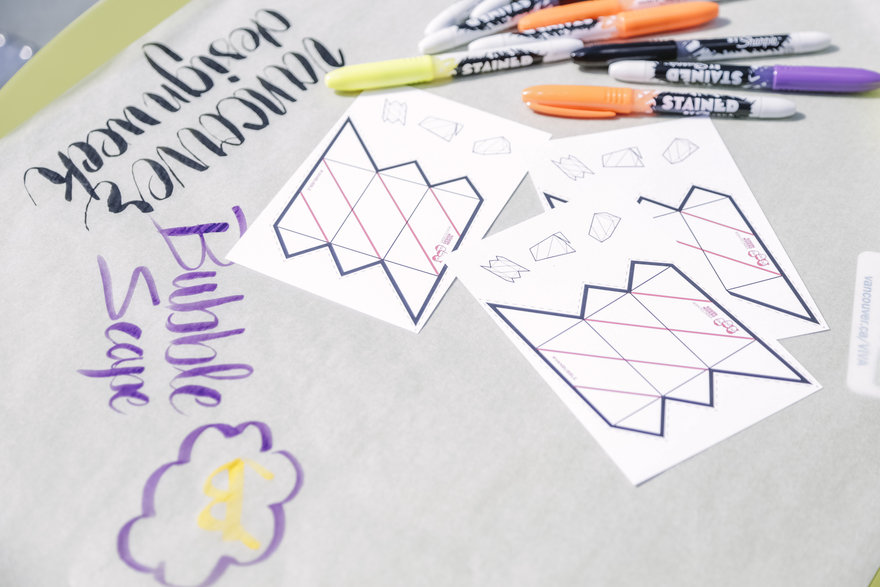 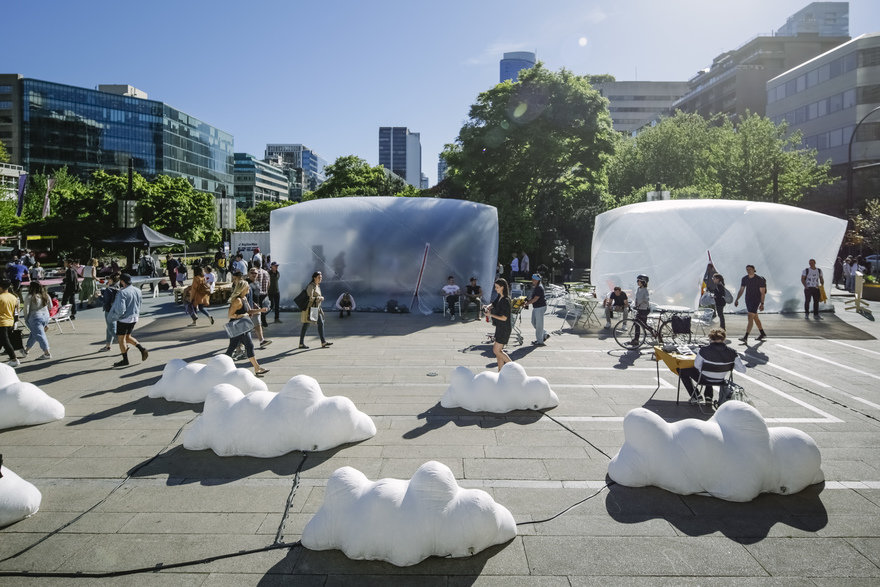 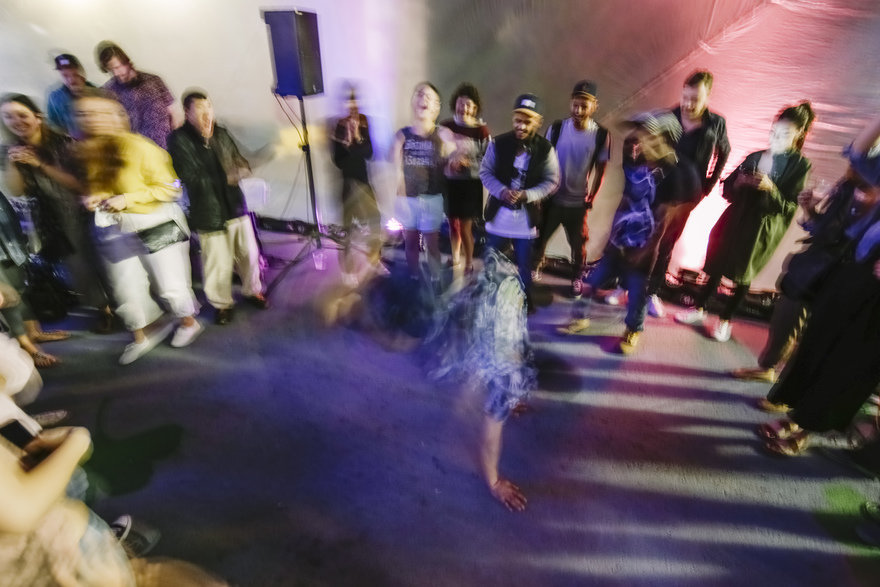 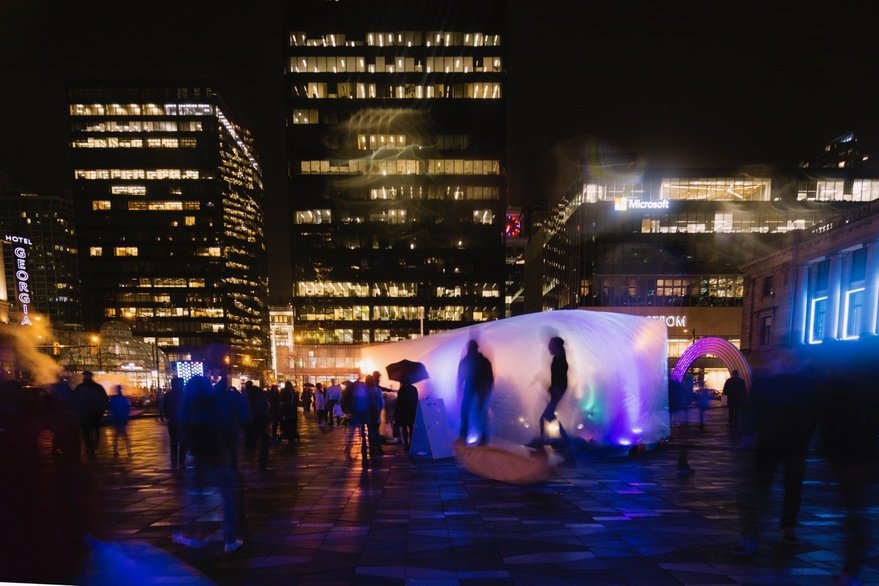 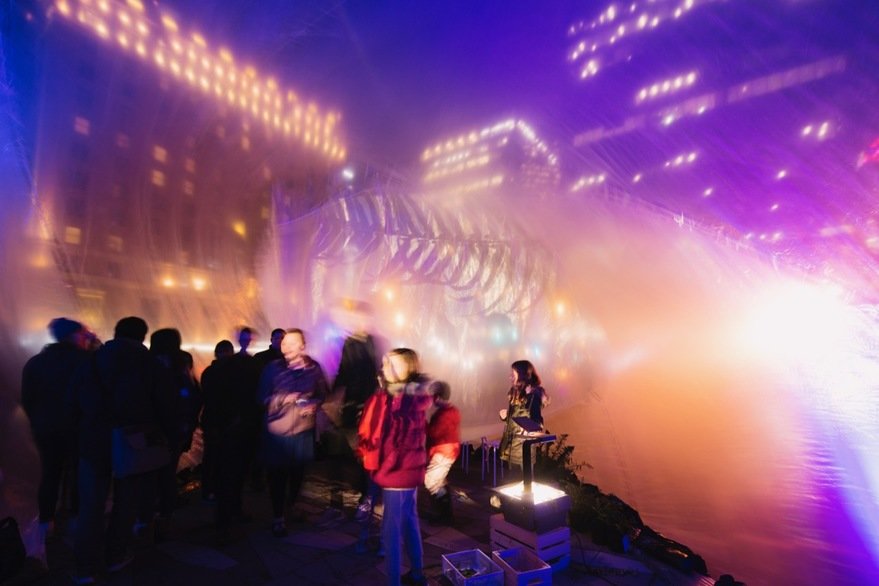 Citizen spaces are intentional, sometimes temporary transformations of public space into sites of participation, dialogue or exchange that can be created through grassroots participation and art and design activism.

The right to the city is the collective power or empowerment of communities to manifest positive change within the built, infrastructural, and social environments around them.

Vancouver is known for being an expensive and isolating city. Real estate prices have skyrocketed in the last few decades, pricing out many locals and resulting in gentrification of traditional cultural communities like Chinatown. Census data and studies by the Vancouver Foundation indicate that Vancouver is a socially isolating place to live. Under these conditions, the right to the city is threatened. In response, a trend of temporary, pop-up interventions has emerged, often with the goal of connecting isolated Vancouverites. However, long-term transformations of public space for community use in Vancouver are less common, and often the most necessary of these sustained citizen spaces exist under threat of demolition, such as Tent Cities.

Citizen spaces can empower participants by allowing them to exercise their right to the city. The Vancouver Bubble is an experiment in reclaiming the right to the city through the short-term transformation of an underused public space. As part of my thesis research, I produced this inflatable urban intervention in collaboration with the Vancouver Design Nerds, a non-profit society dedicated to addressing a wide range of urban issues through participatory engagement and design. We partnered with HCMA Architecture + Design and their Tilt Curiosity Lab to apply for grant funding, and VIVA Vancouver awarded $5,000 to produce our project. This experiment included multiple levels of participation, including a collaborative design and production process. The intervention was also intended to create opportunities for building community connections and promoting dialogue about urban public space.

The participatory design process for the Vancouver Bubble began with a public design jam at the office of HCMA Architecture + Design, where I presented project parameters and possible sites as well as my research interests. After group brainstorming and prototyping, five teams presented ideas for form and programming of an inflatable installation. The concept that stood out the most was the idea of the bubble as a replicable "platform" for various types of community programming. Therefore, we designed a simple, inflatable shape that could be open to interpretation and animated through activities such as participatory engagement, dialogue, music, lighting and projection.

The design maximizes materials and reduces waste by using the full width of a roll of plastic poly sheeting as the key dimension, creating an inflatable, inhabitable cubic shape from a pattern of repeated squares. The pattern allows for a single cube or longer rectangle structures to be connected as pattern pieces are added. Ideally, community groups can easily replicate the installation. Gorilla tape is used to adhere both front and back sides of the plastic pattern pieces, making the shape waterproof and an ideal outdoor installation to bring people together in all seasons in famously rainy Vancouver. Sandbags hold down the perimeter, and an adhesive zipper door lets visitors in and out, and maintains and releases fan-generated air pressure as needed. When powered by Portable Electric generators, the installation is fully independent of infrastructure, and can pop up in just about any location. Finally, the form of an inflatable structure itself offers various metaphors for visitors to consider, such as the inequity of the "housing bubble" or social isolation of "living in our own bubble."

The first public iteration of the Vancouver Bubble took place in January 2018 under the Cambie Street Bridge. The event, titled POP! Get out of your bubble and into ours, was a collaboration with Frida&Frank, local placemakers that host public ping pong events, and CityHive, an organization focused on youth engagement. The aim was to generate a discursive temporary public space welcoming all citizens, focusing on engaging youth in the community. To create our experimental citizen space, we selected the theme of public space itself to anchor opportunities for facilitation and dialogue within the programming we designed. The Vancouver Design Nerds hosted a design jam on the theme, asking participants to share memories of public space experiences in Vancouver, and work together to envision what else the Vancouver Bubble could be. CityHive also hosted a storytelling event inside the inflatable citizen space, where youth storytellers shared their own personal public space love stories, followed by a facilitated dialogue session about youth engagement in public space. Finally, local soundscape artists Soft Fit and Big Zen activated the Vancouver Bubble with ambient music, illuminated by a lighting installation by Hfour.

Our experimental citizen space engaged a number of visitors in conversations through facilitated programming and the transformation of public space. As a project lead, this experiment created new social networks for me, and I am more connected to the community of placemakers here in the city than I was before undertaking this work. It is possible for short-term interventions to become citizen spaces by balancing light hearted engagement with conversations and community awareness about important issues. However, long-term transformations of public space for community use can and should be explored in contexts where space is at a premium, like Vancouver. In particular the transformation of space to meet the urgent needs of marginalized communities should be considered. Long-term transformations offer sustained engagement, empowering citizens to take ownership over community spaces and form long-term social bonds through the process of reclaiming their right to the city. Community needs inform the use of particular sites, including factors such as their suitability for short-term intervention or long-term transformation. Both interventions and transformations offer benefits, including opportunities for new social interactions in public space as well as temporary or sustained engagement in the physical transformation of a site for community use.

The Vancouver Bubble project was an opportunity to experiment with the form of urban-scale interventions and learn the opportunities and limitations of public space activation-based engagement in Vancouver context. The Vancouver Bubble used a participatory design process and engaged a large number of volunteers to design and build the intervention, offering unique opportunities for collaboration and new social constellations to be formed. Since the POP! event, organizers and volunteers have re-grouped and produced additional iterations, illustrating that the process of intervention has built a community around itself, and has allowed participants to begin to reclaim their right to the city through grassroots participation, design activism and creating citizen spaces.