An Urban Barley Field was a seasonal installation on concrete stairs in the middle of vast traffic channel in Tallinn, Estonia. The Soviet-era residential area, built in 70s has fallen into stagnation. According to the big urban planning, a tramline was supposed to connect the district with the centre of the capital. The road, the bridges and even the stairways for the tram were built, but 40 years later the tram has still not arrived...

In the summer of 2016, Lasnamae's urban plan got a new mid-term solution as two young designers planted a barley field on the unused stairs in the middle of the highway, on the nowhere- leading concrete stairs. After a successful growd funding campaign 30 tons of soil where carried up the stairs with the help of volunteers, bucket by bucket and barley, the earliest crop grown in Estonia just precisely in the same area, was seeded on the stair-field. Throughout the summer the installation offered the district a new blow of life – green young verdant seedlings growing and turning into a ripe yellow barley field reminding us of the cycles of nature and life. By autumn the crop was ripe for harvesting. And on the 22th of September the harvest party was held. 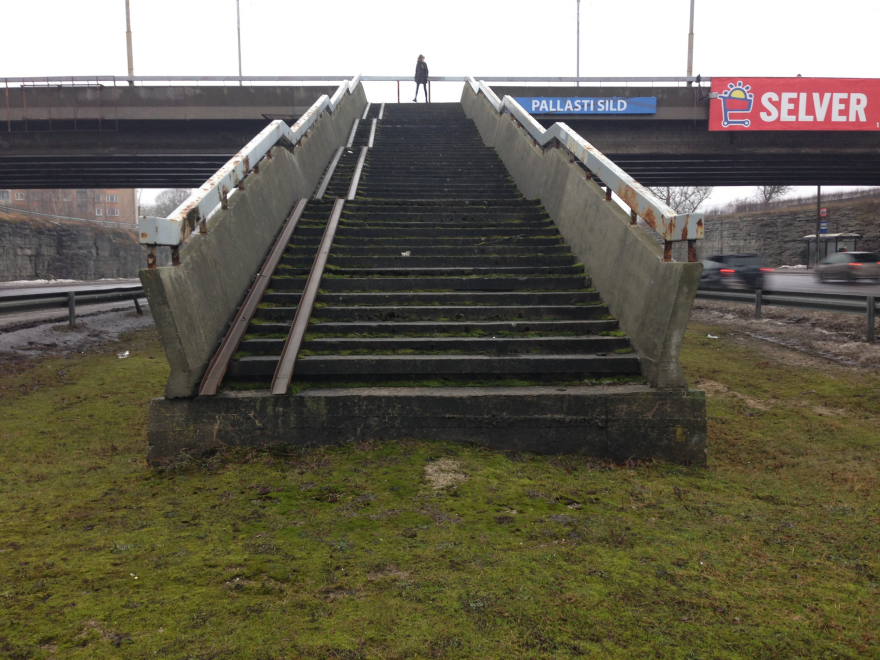 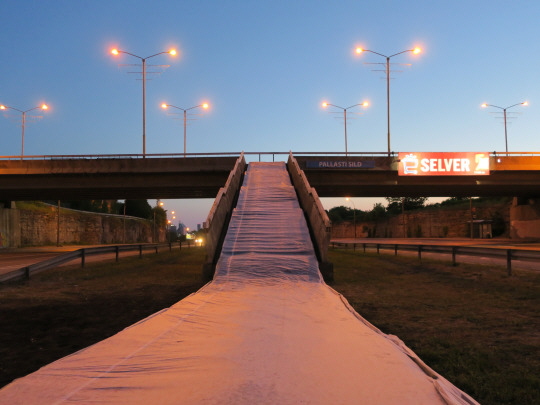 stairs after seeding May 2016 Ann Press 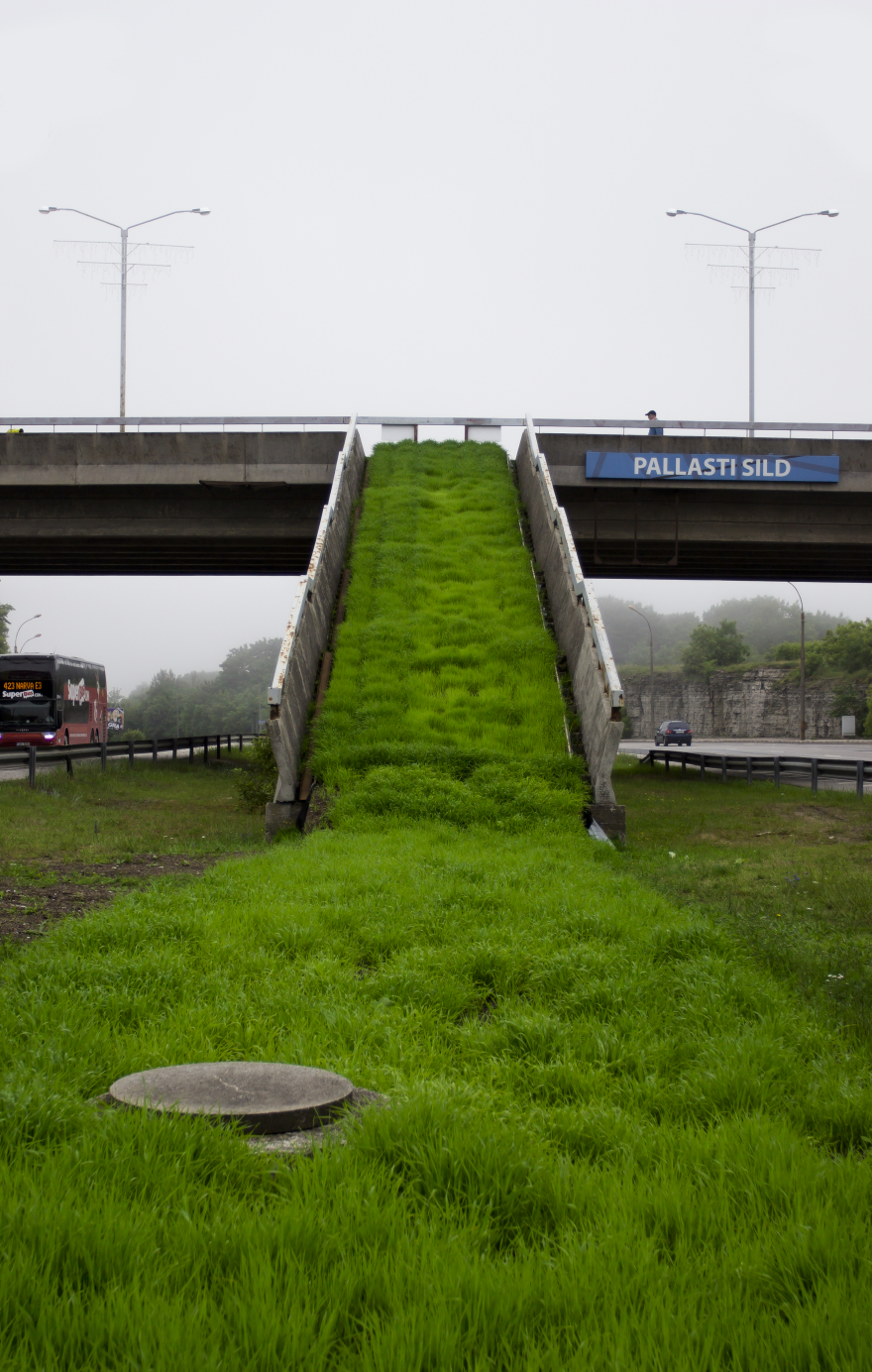 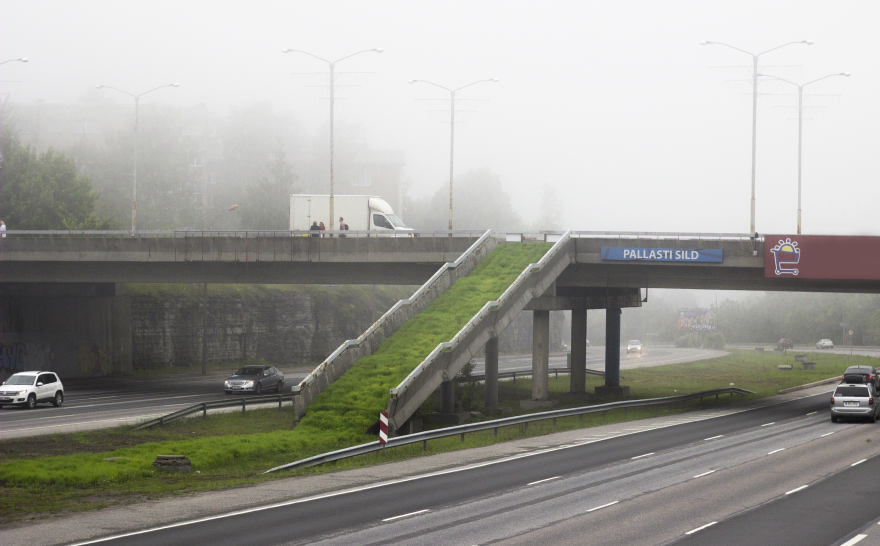 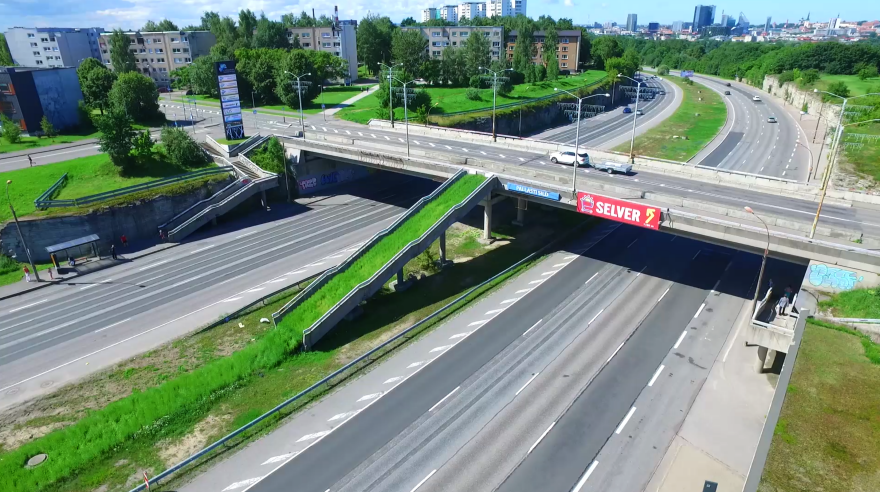 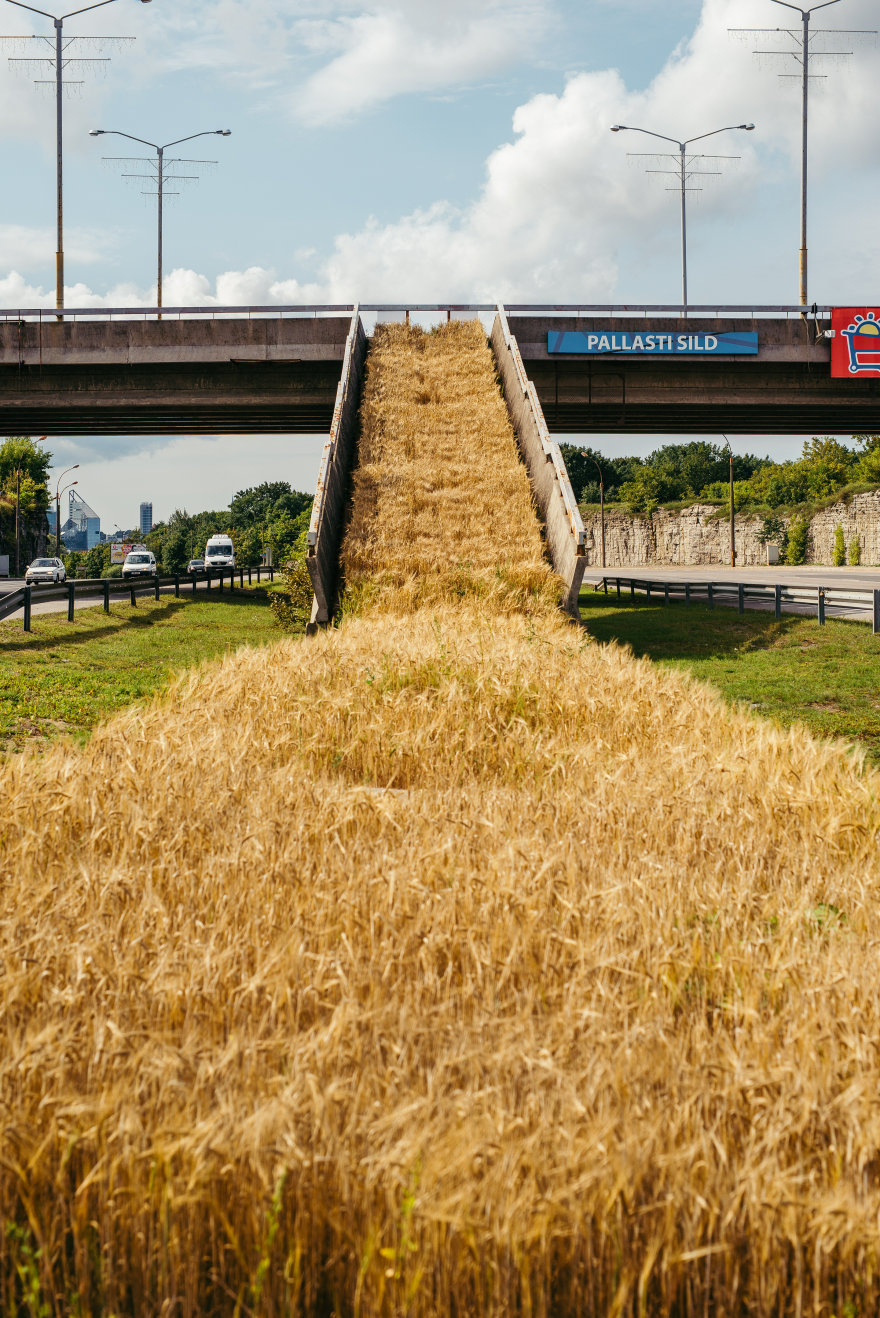 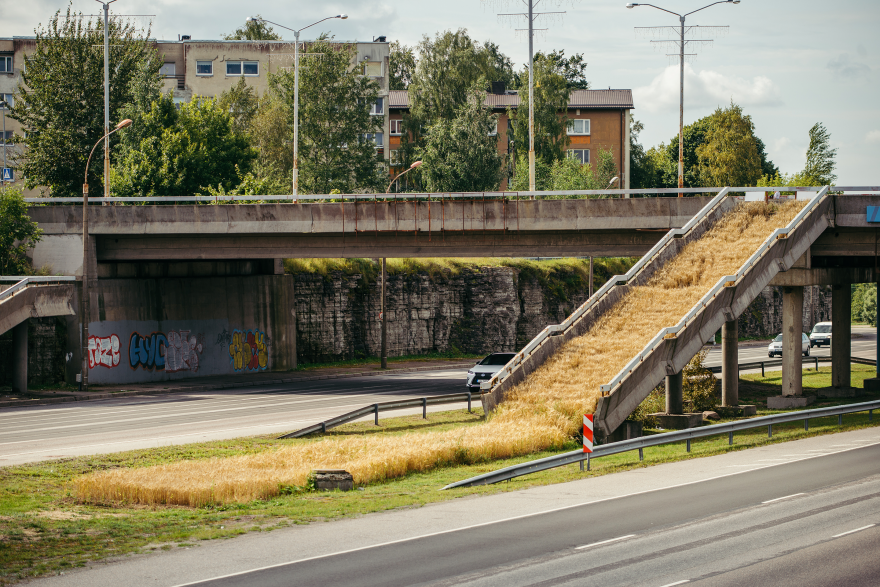 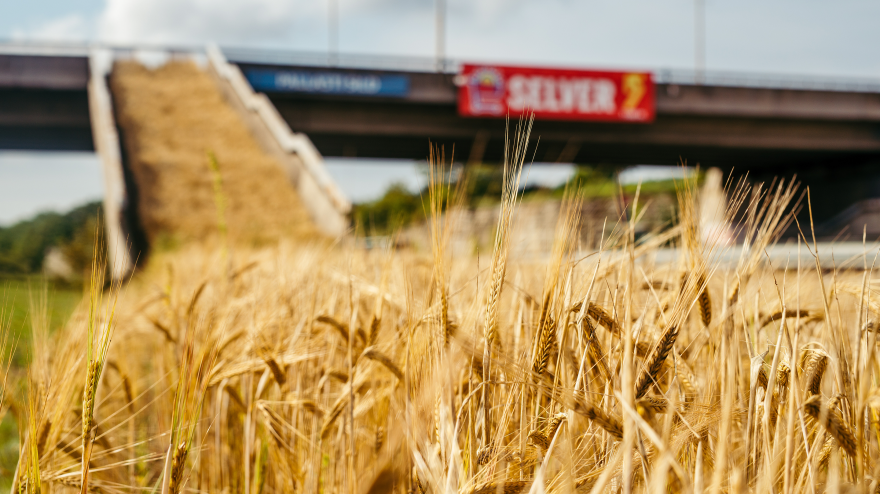 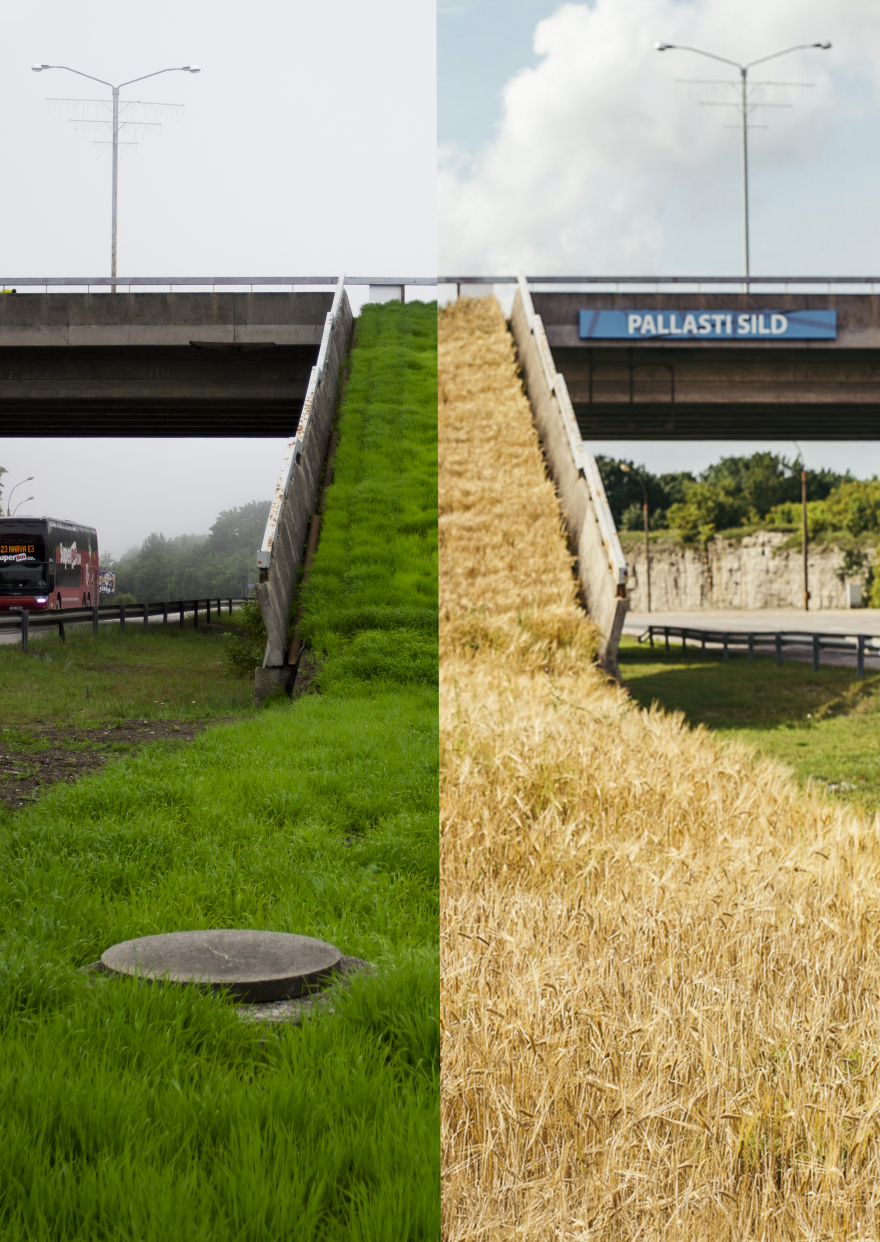 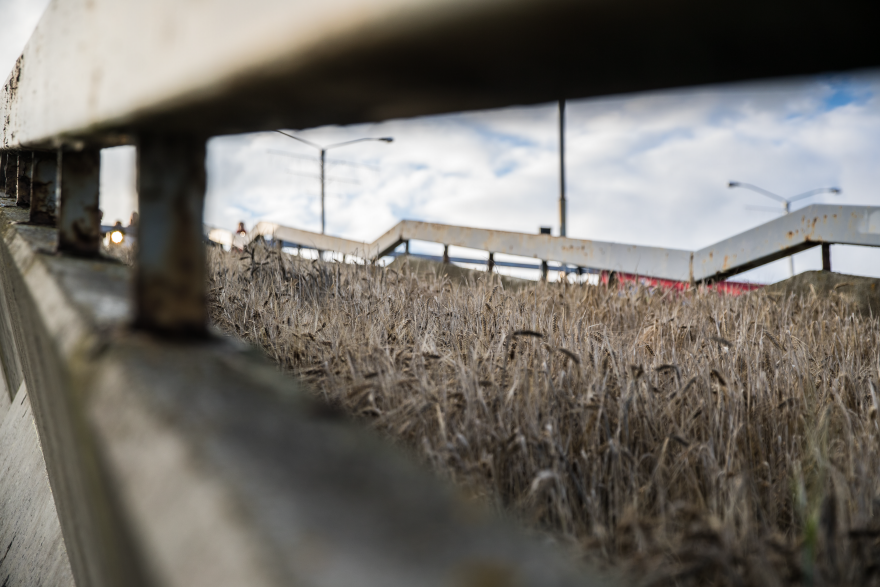 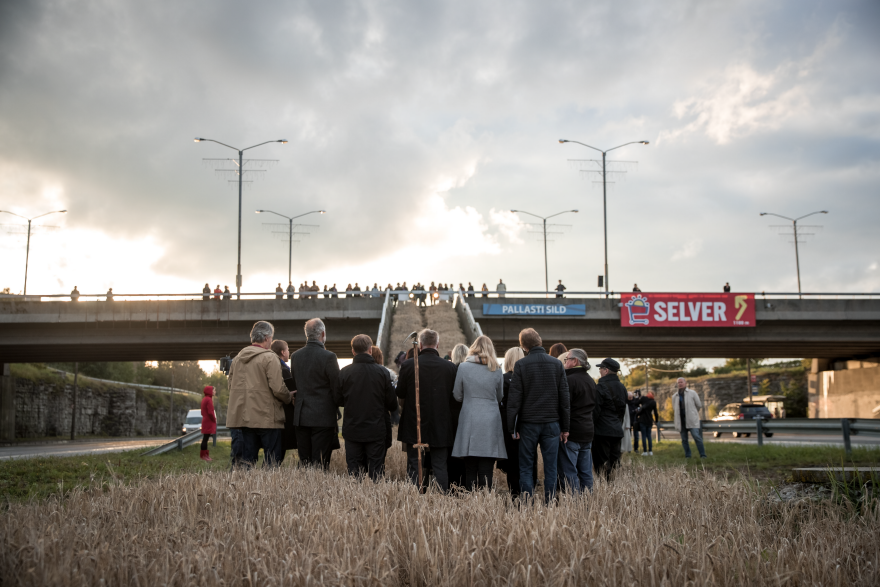 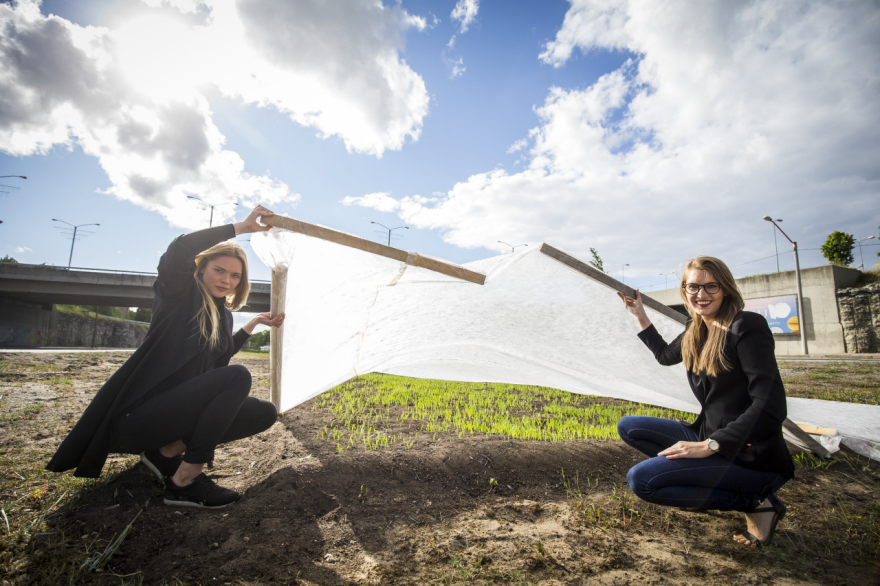 with authors, before opening May 2016

In the summer of 2016, the largest Soviet-era residential area of Estonia was living a new life. The district Lasnama¨e, in Estonia's capital city Tallinn, was built in the late 70s, but it has fallen into stagnation. Little has changed since its inception, and those big plans are still unfinished. A vast traffic channel to the city center is waiting for a planned-but-never- built central tramway. The road, the bridges, and the stairways-to-nowhere are completed, desperately waiting for the tram.

This summer, Lasnama¨e's urban plan got a new mid-term solution as two young designers planted a barley field on the unused stairs in the middle of the highway. Ann Press and Andrea Tamm are both practicing interior architects and Master's degree students at the Estonian Academy of Arts' Interior Architecture Department. What started off as schoolwork for us grew into a significant urban installation.

The idea of a barley field installation came from history—barley was the earliest crop grown in Estonia and was grown in the area of Lasnama¨e in circa 500-600 BC. Because the culture of barley growing was brought to Estonia from Russia, and the tramway stairs mark the border between Estonian- and Russian-speaking districts, the art installation carried an idea of integration for us. The aim of the barley field was to bring some contrasting softness, some life and progress to this industrial area, but also to encourage the locals to take steps towards changing their living environment, instead of waiting for the authorities to do it, given that the tram has still not arrived after over 40 years.

This project was founded by a crowdfunding campaign, built and cut with the help of volunteers. The soil—45 tons of it—was carried on the stairs bucket by bucket. By the end of September, the crop was ripe and we held a harvesting party for the stair-field. The harvested crop was made a gift for the crowdfunders; some if it is now living a new life as jewelry, while some of it was taken to a laboratory for tests that will calculate air pollution levels of the area.

Throughout the summer, the stairs of barley offered the district a new puff of life—young, verdant seedlings growing and turning into a ripe yellow barley field, reminding us of the cycles of nature and life.