Situated in a historical industrial park, Bright is a light totem commissioned as an iconic landmark for the 01 Technology Festival in Shenzhen, China. An ethereal tower that is baptized in light, the tower comprises of 23 illuminated rings. A slit splices the tower in half, creating an enclosure where one can enter into the tower and be immersed in a volume of light, creating an uplifting experience.

Desiring to rekindle a humanistic aspect to Technology, the Design is derived from the study of the name of festival- 01 (Zero One) Technology Festival. The digits 01 originates from the binary code, a system that uses digits to represent a letter or character in digital space. Having a far-reaching aspect beyond technology, the binary code informs the form of the sculpture.

23 illuminated inner rings with different widths are spaced out, denser at the bottom and progressively apart toward the top, creating the illusion of a dematerialising tower. Lighting behaviour programmed to mimic breathing behaviour humanises the steel structure. With lighting behaviour designed to mimic a person's breathing, one instinctively and intuitively recognize Bright as something humane, although being created by technology - something that we seek to imbue to the notion of Technology.

Bright seeks to re-think the notion of conventional technological fairs which are largely focused on technological advancements and trendy gadgets. Emboldening the spirit of the 01 Tech Festival, it seeks to convey an experience centred on the human aspect of Technology. Visitors can interact with the sculpture and be immersed in its volume of light, creating an uplifting experience. As the light rises to the top at different speeds, light intensity alternates between deep and short pulses at measured intervals, creating a semblance cognisant of humanistic behaviour. 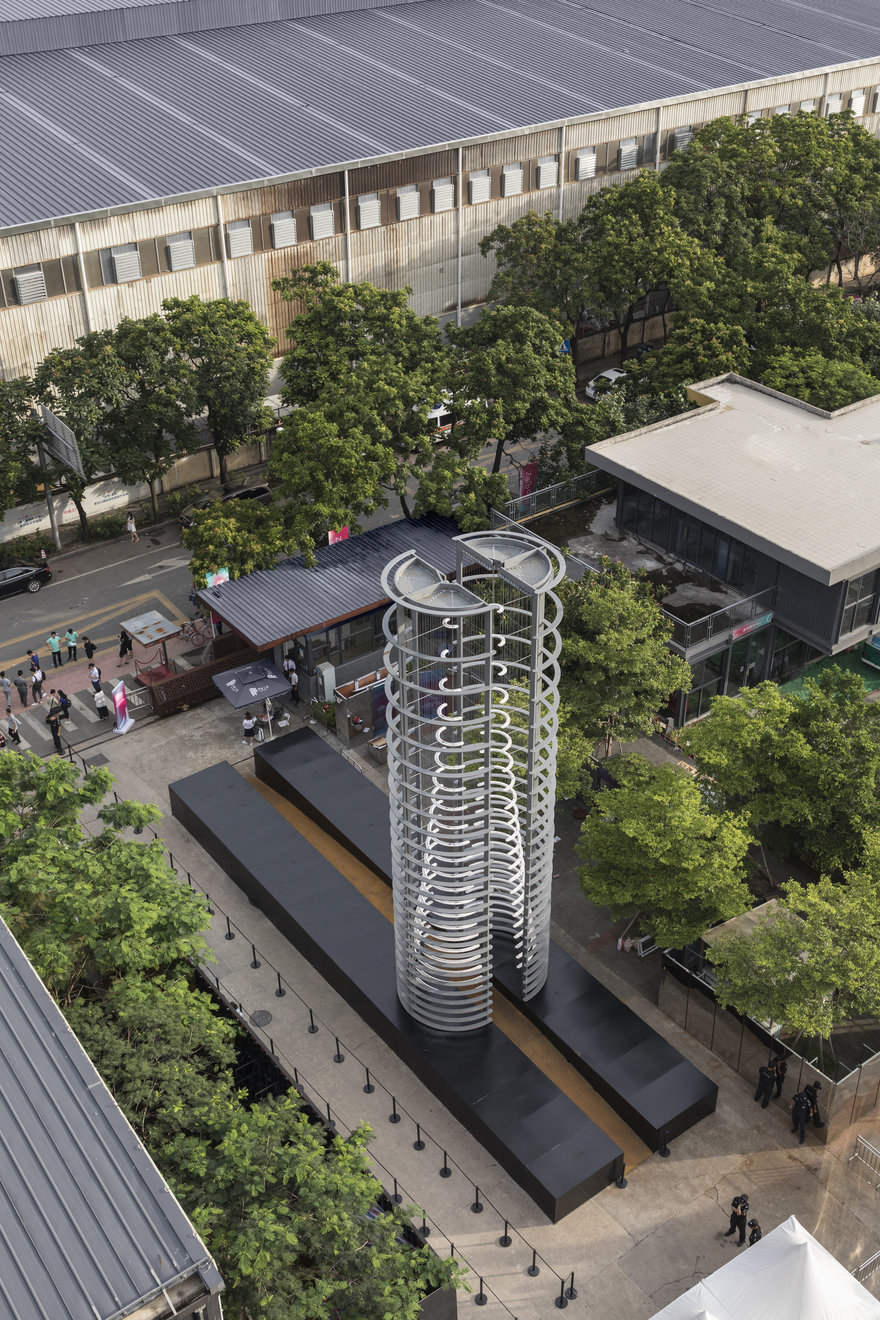 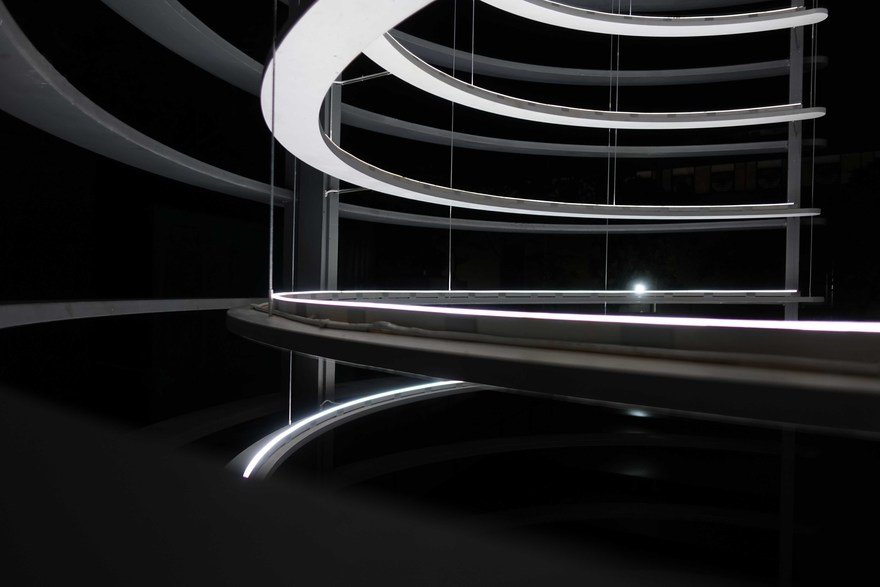 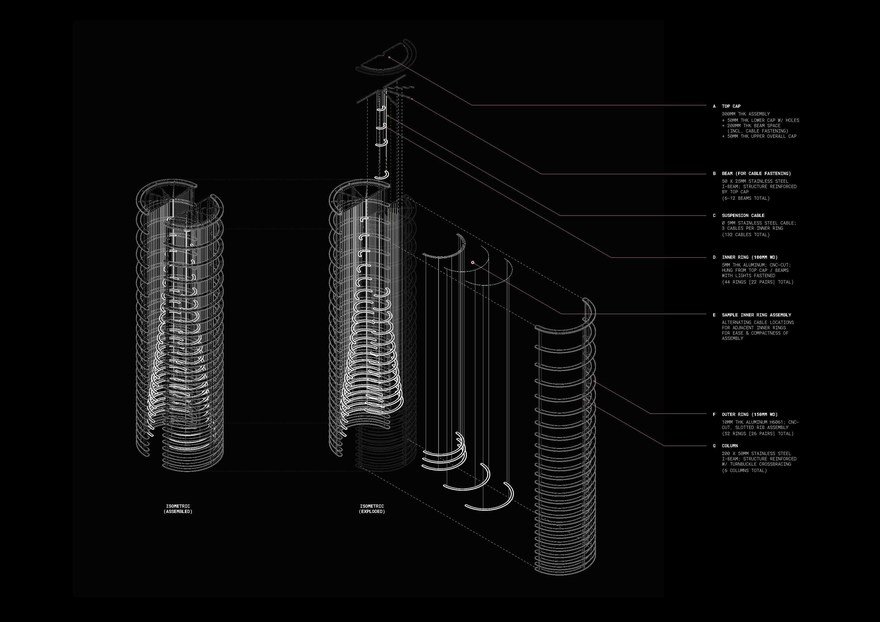 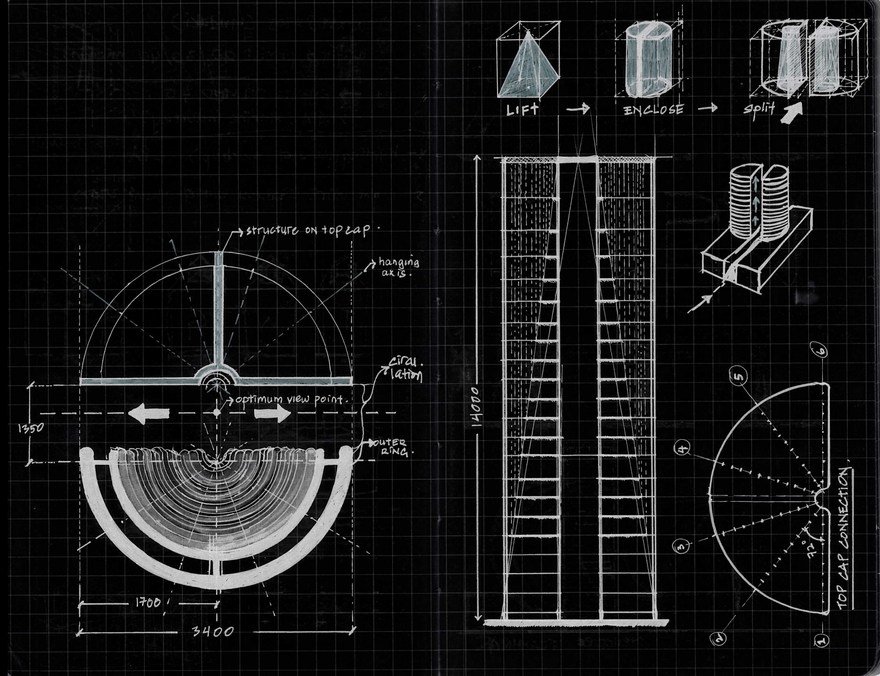 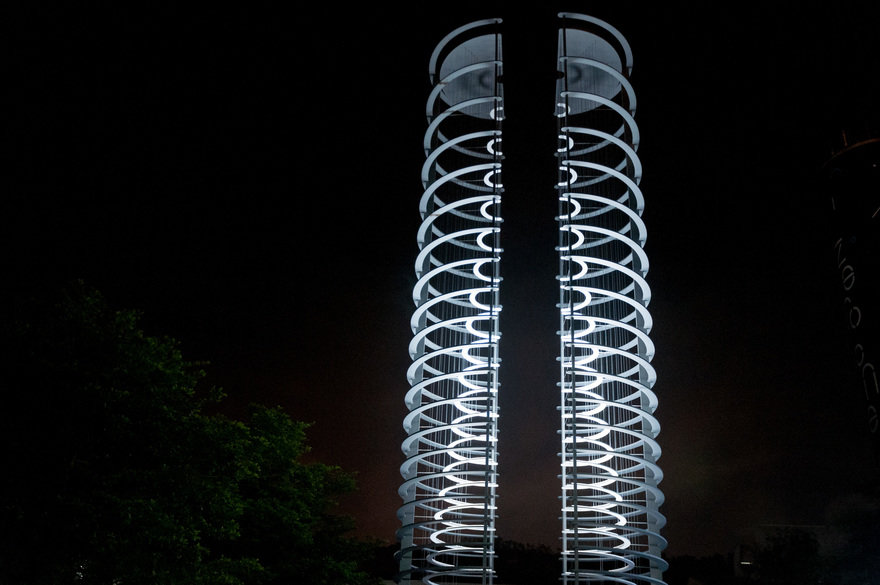 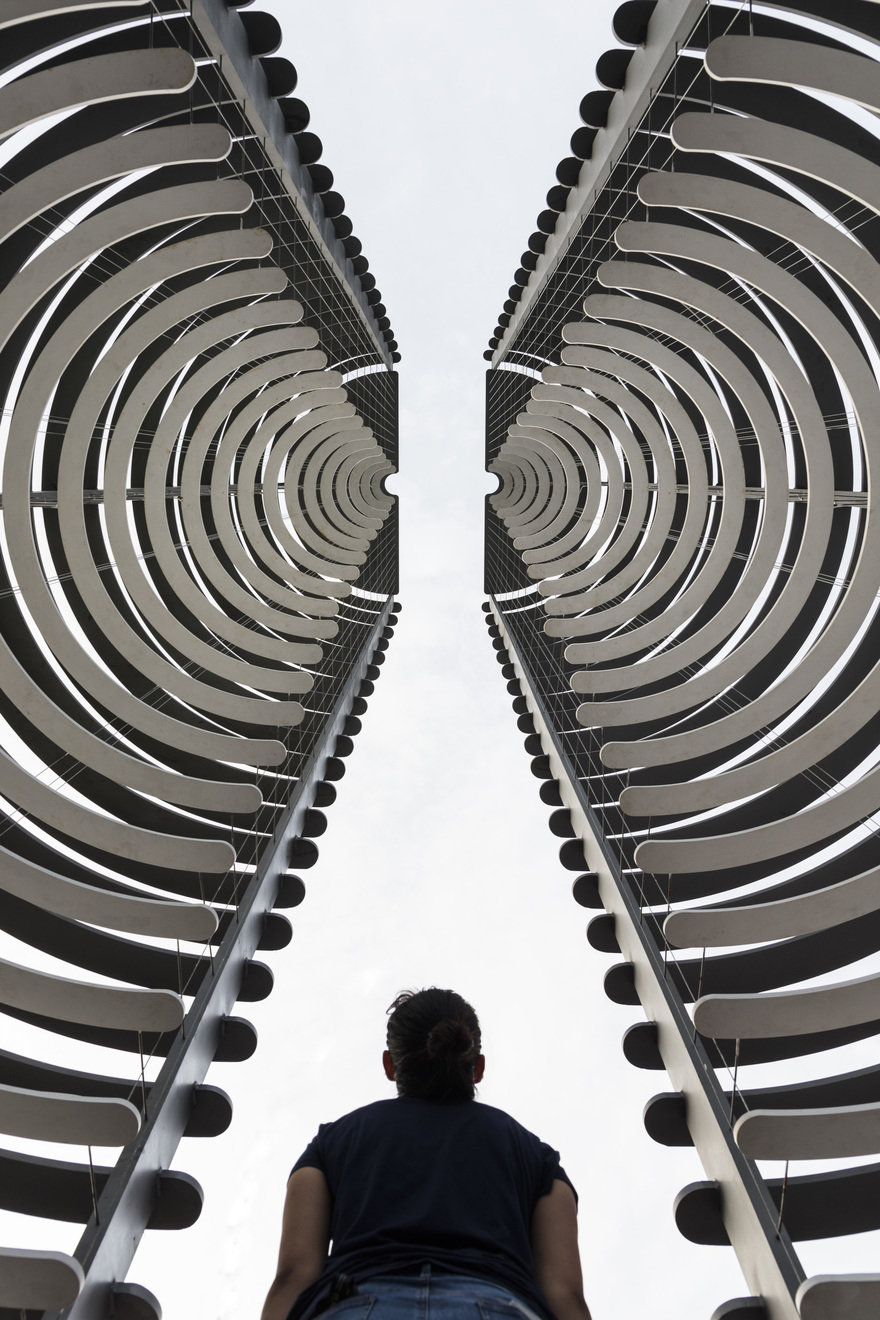 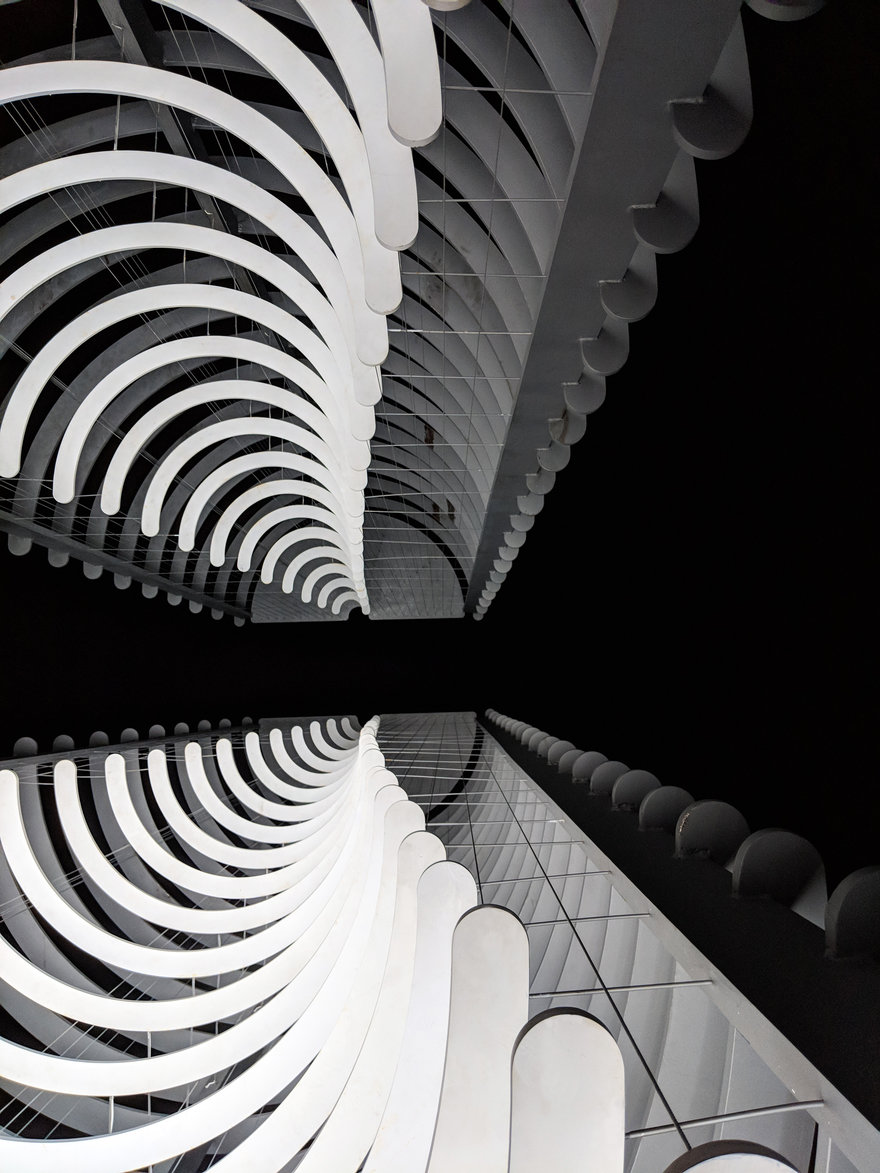 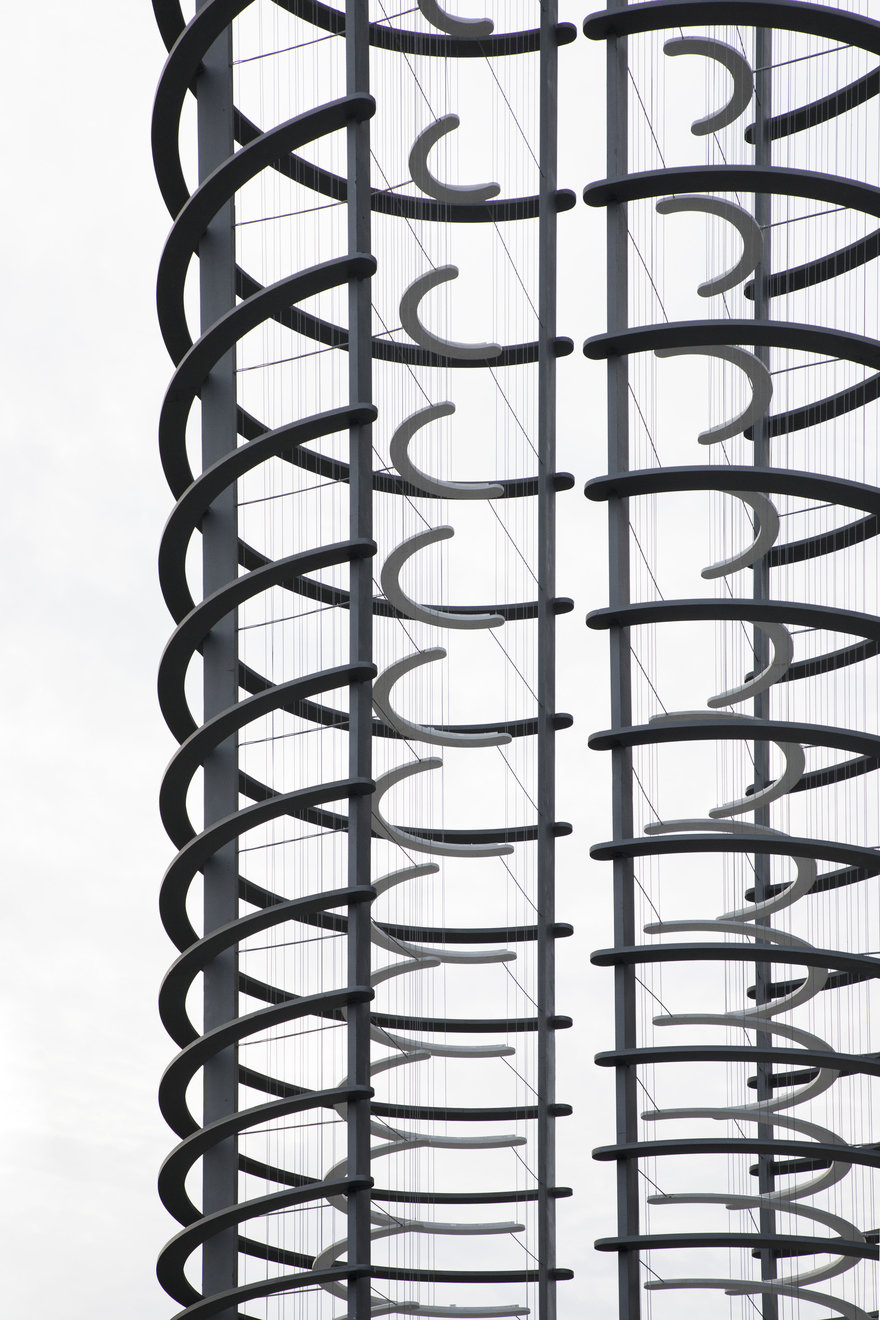 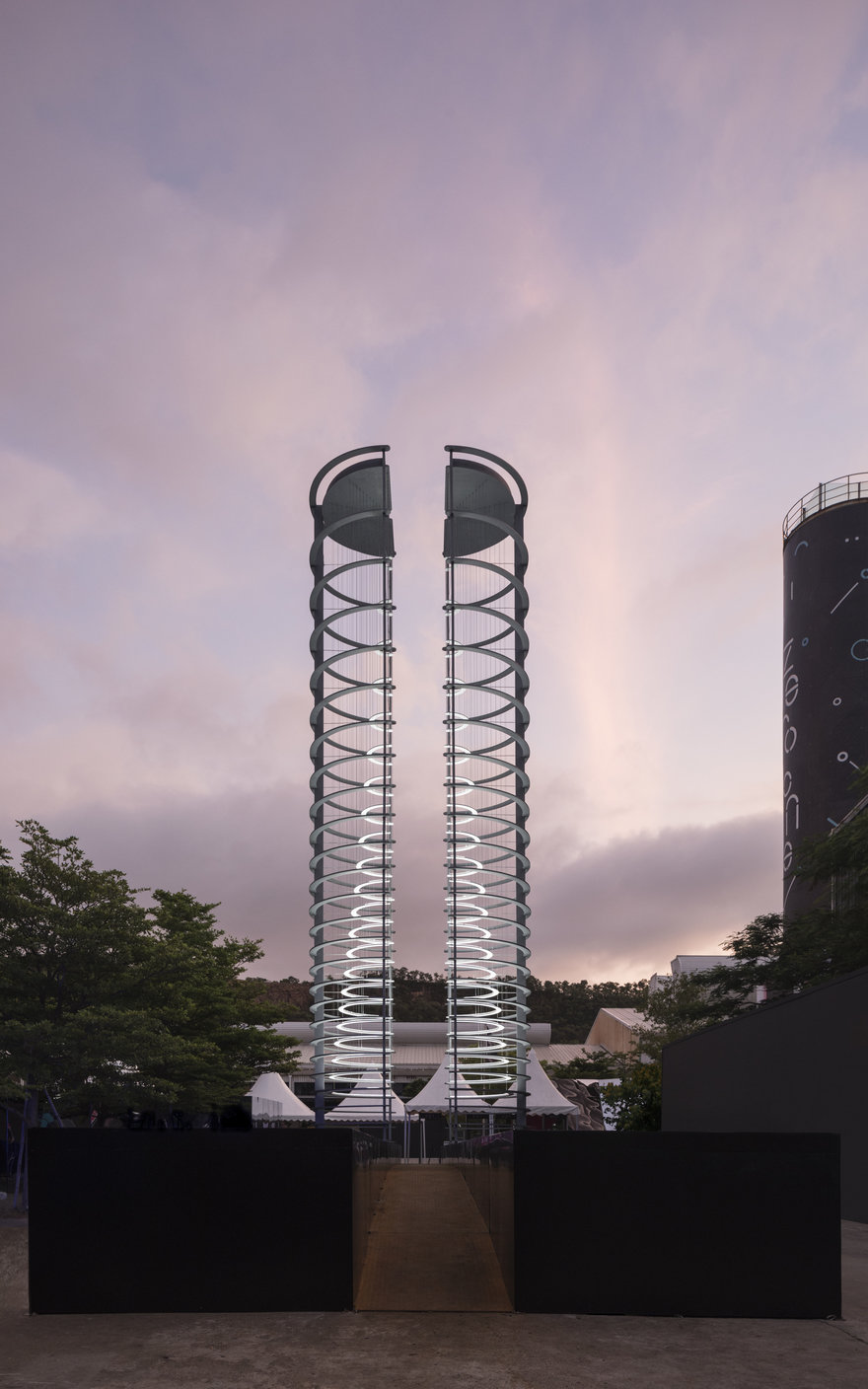 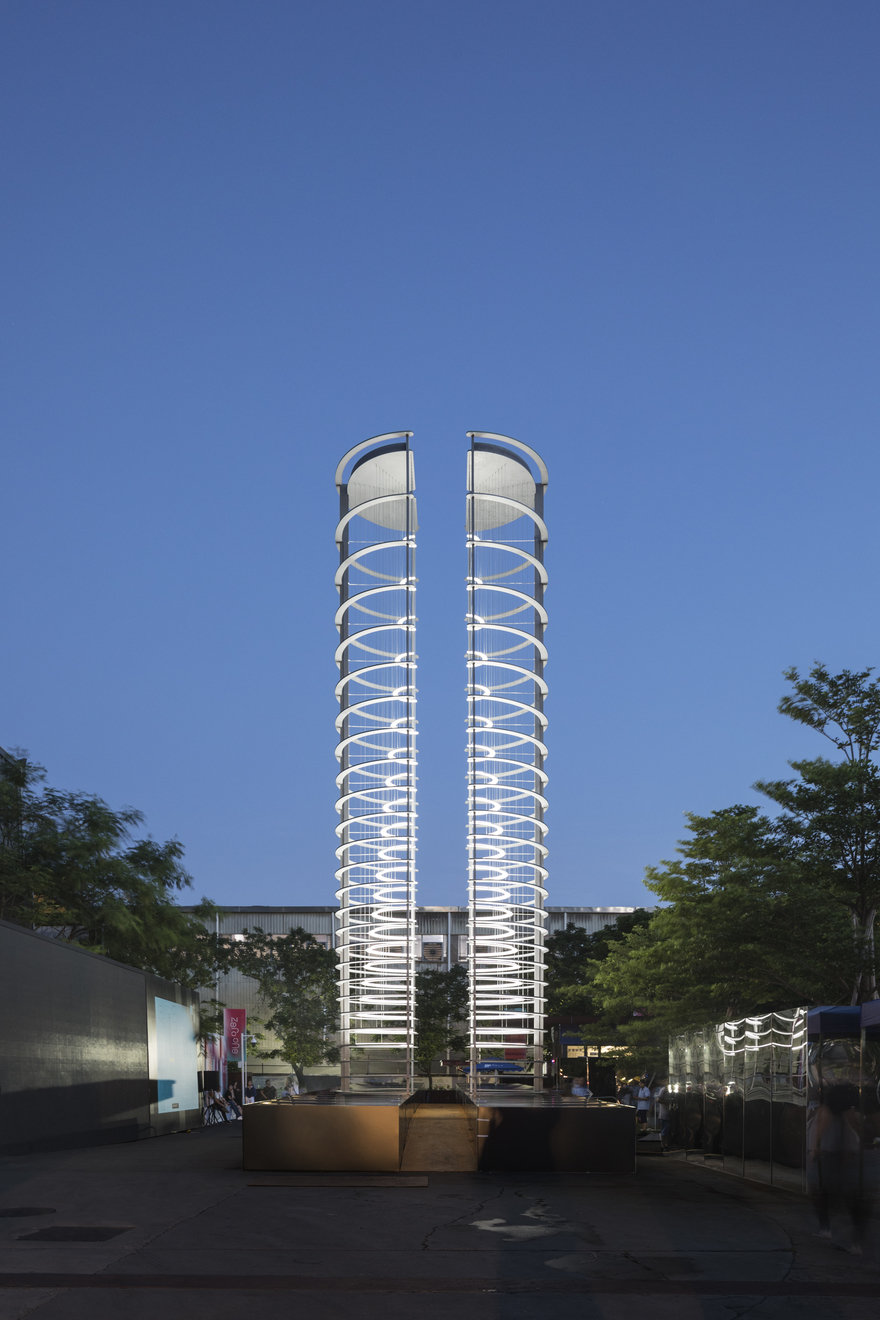 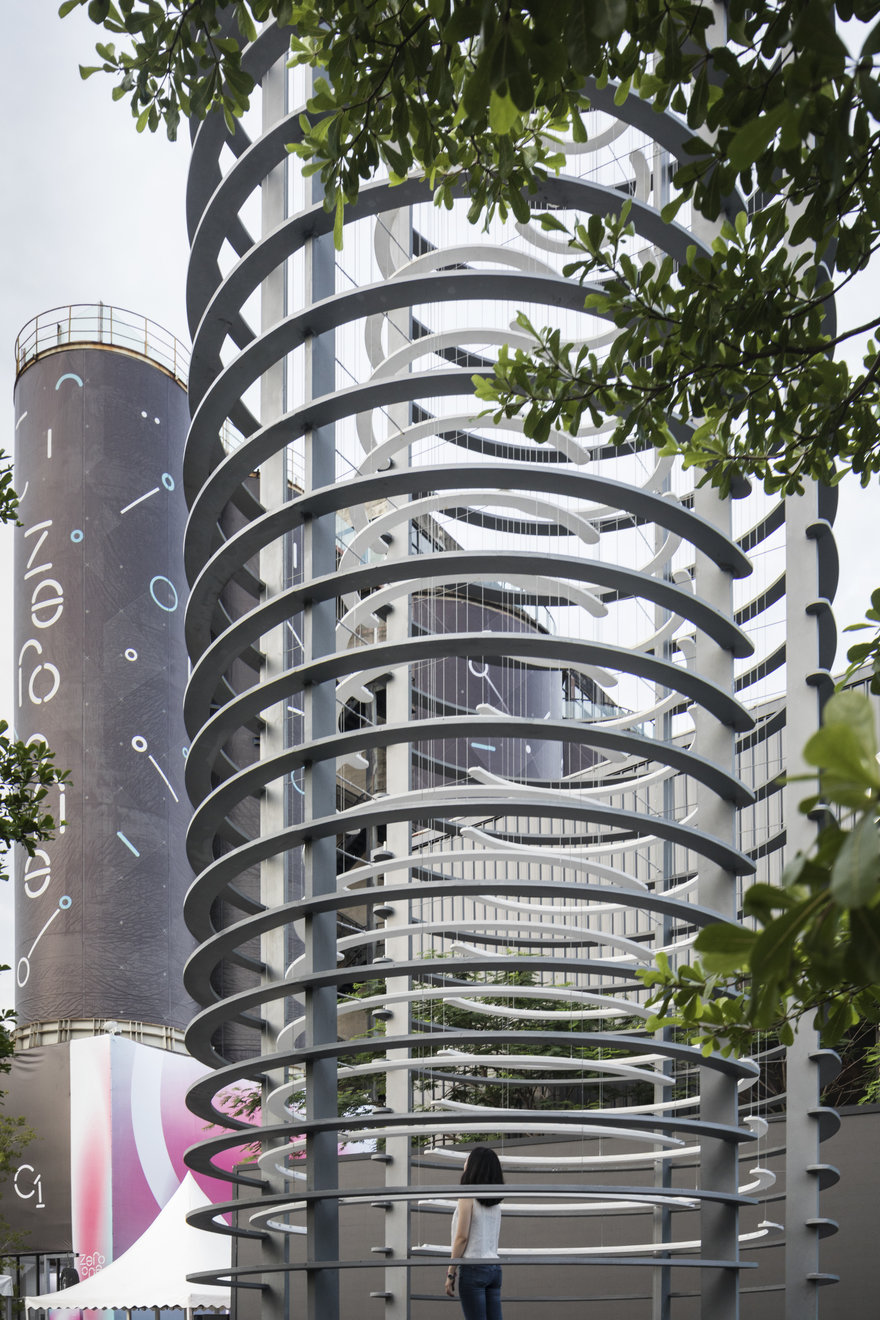 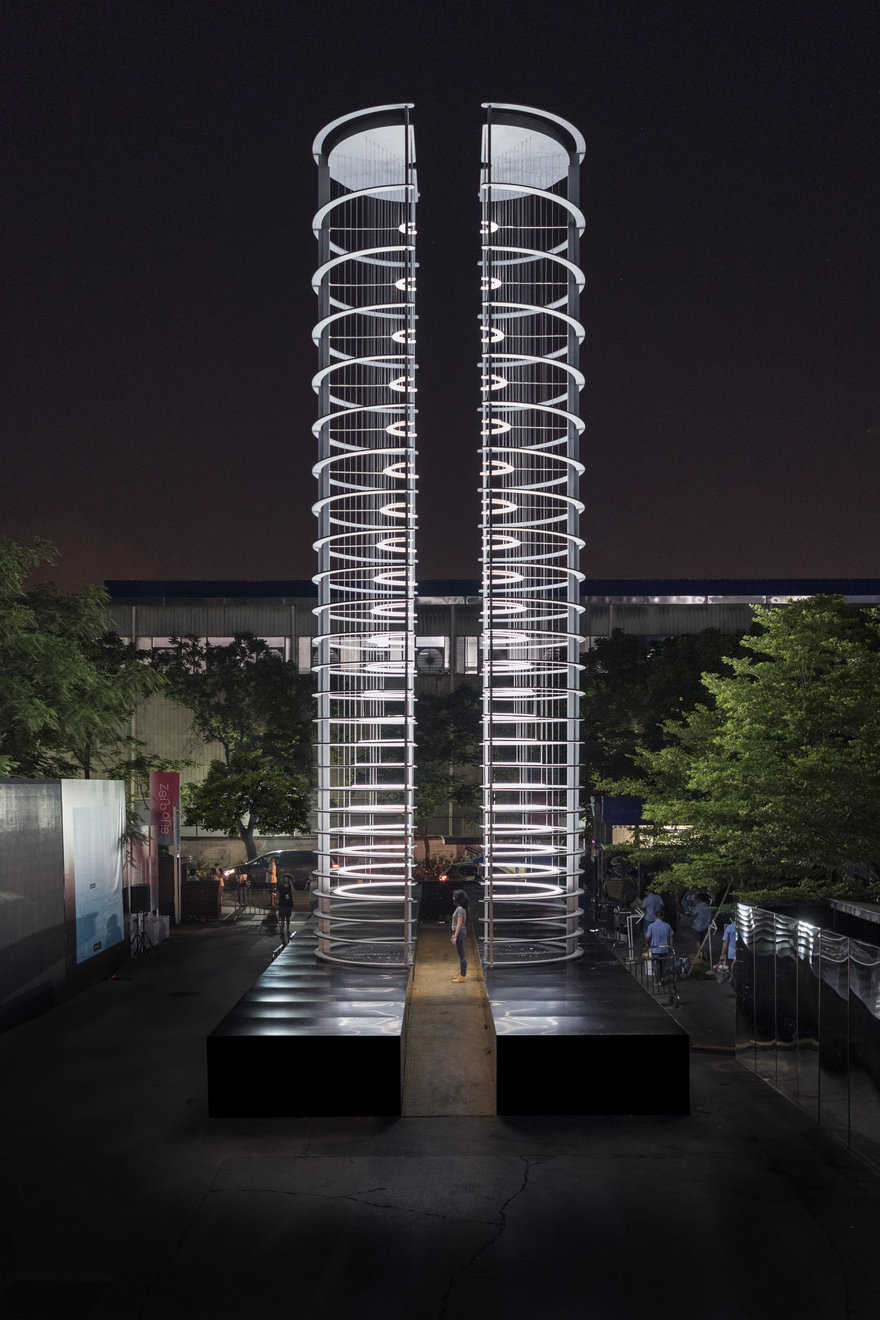 The client commissioned us in curating and designing the first technology festival in their history. After months of deliberation, the site chosen was in a historical industrial park in Shenzhen. Unlike other technology-centric fairs or exhibition which flaunts the latest shiny and new inventions, at this festival the aim was to connect in a humane way. The client requested for an iconic symbol that would attract the public to the festival.

In desiring to rekindle a humanistic aspect to Technology, the solution arose from further study of the concept of the name of festival, which is 01 (Zero One) Technology Festival. The digits 01 originated from the binary code, a coding system using the binary digits 0 and 1 to represent a letter, digit, or other character in a computer or other electronic device. Recognizing that the binary code has a far-reaching aspect beyond technology (such as Braille, reading for the blind or Bagua, the diagram system used in Chinese tradition such as fengshui), we latch onto this to inform the form of the sculpture.

The light totem represents the binary digits of 0 and 1 when one looks at it from different vantage points. From above, the totem represents 0 while in elevation it has a silhouette that represents the digit 1. We added a lighting behaviour to humanize this elegant steel structure. By hanging 23 illuminated inner rings with different widths, the totem creates an ethereal tower that's baptized in light. By spacing these rings, denser at the bottom and progressively more spaced apart to the top, one looks up and witnesses how the tower dematerializes. A slit is then inserted, creating an enclosure where one can be immersed in a volume of light, resulting in an uplifting experience. The lighting behaviour was designed to mimic breathing behaviour. Rising to the top at different intervals, the sculpture behaves like a living creature. By changing the light intensity at measured intervals, constantly varying between deep and short breaths, the sculpture creates a recognizable humane behaviour.

Conceptually, the challenge was to create an iconic sculpture in the main entrance of the exhibition that emboldens the spirit of the technology festival. The installation aims to rethink the idea that a technology festival is all about artificial intelligence or advancements in the latest gadgets, but it desired to rekindle a humane aspect to the notion of Technology.

Located in a historical industrial park in Shenzhen, the tower was erected over a large ramp that was previously used to contain a truck on site. We faced a couple constraints, where we needed to account for the steep slope of the site and the instruction to not anchor into the existing ramp.

Structurally, as the sculpture could not be anchored to the existing ramp nor the concrete beneath it, the main structural and logistical challenge was to engineer a technique to erect the 14-meter double layered steel structure made out of steel over the existing ramp without damaging it. Counter-weights were strategically conceived within the existing ramp to stabilize the sculpture, whilst keeping the vision of creating an ethereal tower that focuses on the experience.

Each half of the structure is supported by 3 mild steel columns that are 50 x 200 mm in dimension. 23 outer rings, 30 mm in thickness are welded on and craned onto site. This outer frame is attached to the counter weights hidden inside the existing ramp. Once they are set in place, the inner rings (also mild steel), 20 mm in thickness are hung on 3 points from the top plate and stabilized by 3 horizontal rods (8 mm diameter) that connects them to the outer rings. The LED light strips are secured on the top side of each inner rings with DMX controllers to allow control of the lighting behaviour.