“So easy you can do it with one arm tied behind your back,”

was the design brief was brought to us by Arizona based MagMod, as inspiration for a completely reimagined line of photography lighting gear. The system was designed for the so called “run and gun” photographer. Somebody who shoots events as they happen, without the ability to stop and setup or adjust. Seconds can be critical for these photographers in getting lighting positioned in time. Current cold shoes, ring mounts, and soft boxes are slow beasts to set up, and get in the way of catching the moment. Swarm was tasked with revolutionizing the way photographers interact with their equipment, allowing every single interaction in the system to be done while holding a camera in their other hand.

Existing solutions on the market featured a daunting mix of parts, brackets, and screws with clunky rotation points and counterintuitive adjustments. Swarm set out to create an intuitive mechanical system to make the lighting system sturdy, simple to set up, and easy to use. Designed to work seamlessly with MagMod’s existing product line, Swarm created several innovations never-before-seen in the photo industry.

Swarm developed the world’s first softbox featuring an obstruction-free design without the need of an inner baffle to reflect light. This reduces the loss of light and provides brighter, controlled and even coverage. When coupled with the Focus Diffuser, the MagBox is up to 2.8 stops brighter than traditional softboxes. Also unlike other softboxes, the MagBox opens and closes with one-handed ease and attaches effortlessly to the MagRing with extra-strong neodymium magnets.

The MagRing had the goal of easily mounting one or two speedlites using MagMod’s already successful MagGrip system. The connection had to be secure enough to support two heavy lights on the end of a light stand without the risk of being knocked off if bumped or dropped. Speedlights can clip in in seconds, with the option to use two speedlights. MagRing gives photographers the ability to take studio level lighting out into the field.

Cold shoes are a necessary evil. They are typically small, finicky, and weak, but they are necessary if you want to stand mount a speedlite. The MagShoe is the anti-cold shoe. It is strong, ergonomic, and intuitive. Swarm developed a completely new twist lock to securely grip the foot of the speedlite. A simple 1/2 turn locks the foot into the shoe. The connection is so secure that Swarm was able to use it to mount the whole MagRing / MagBox system loaded up with two heavy speedlites. Instead of twisting knobs, a simple trigger is used to quickly aim the system, and its integrated locking mechanism makes the whole system secure.

These tools were all designed together to work hand in hand with each other giving seamless flexibility to the user to create great shots in no time. 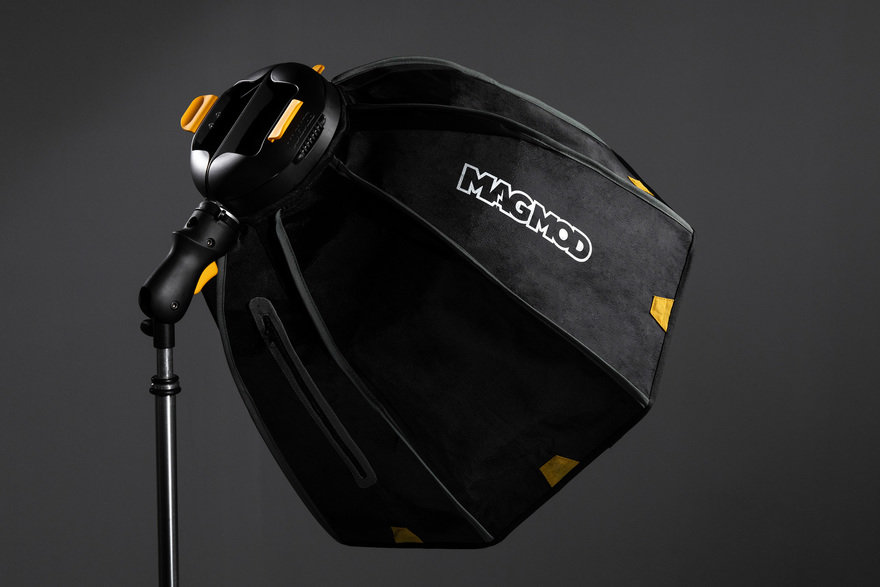 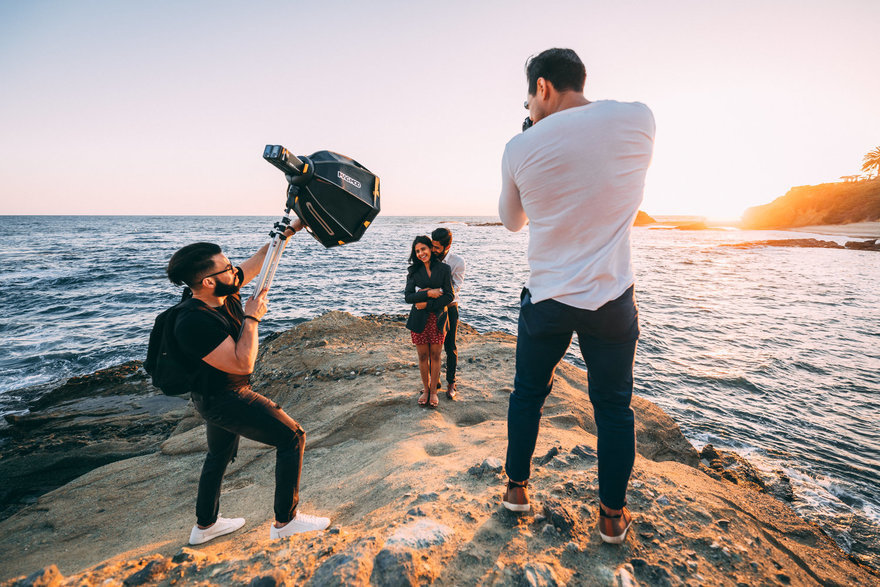 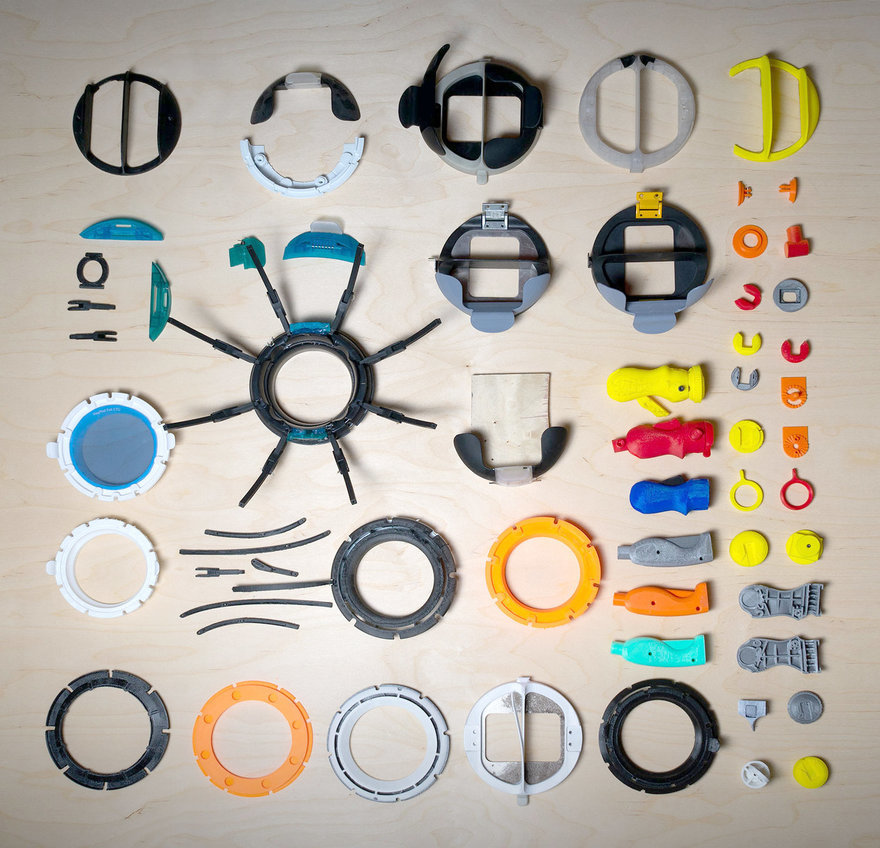 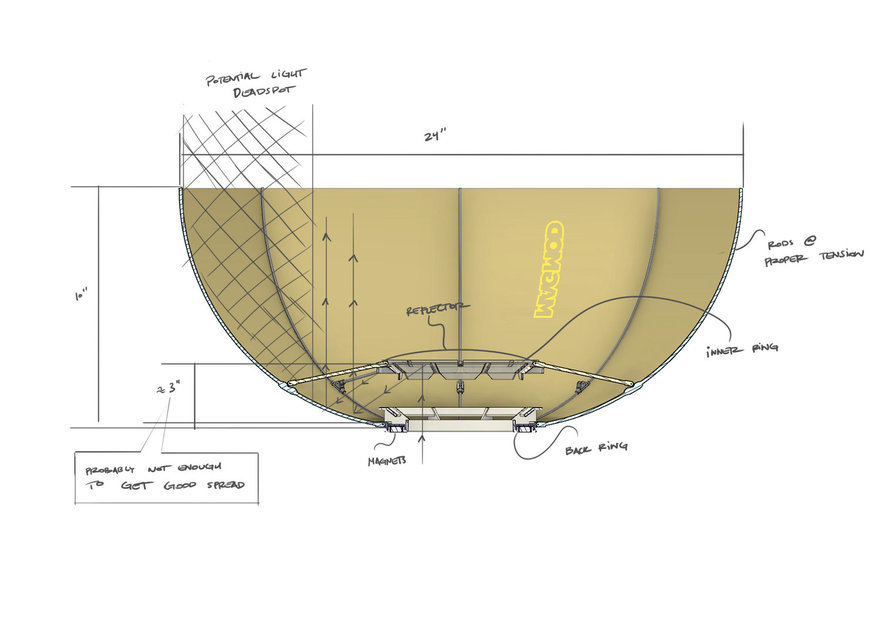 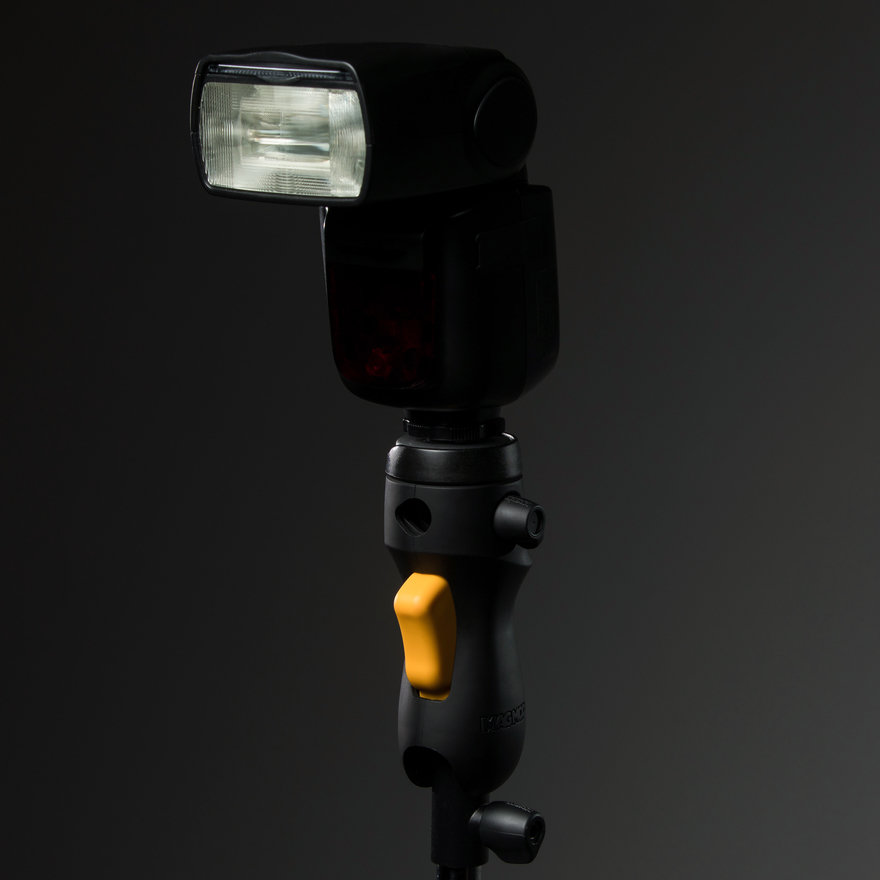 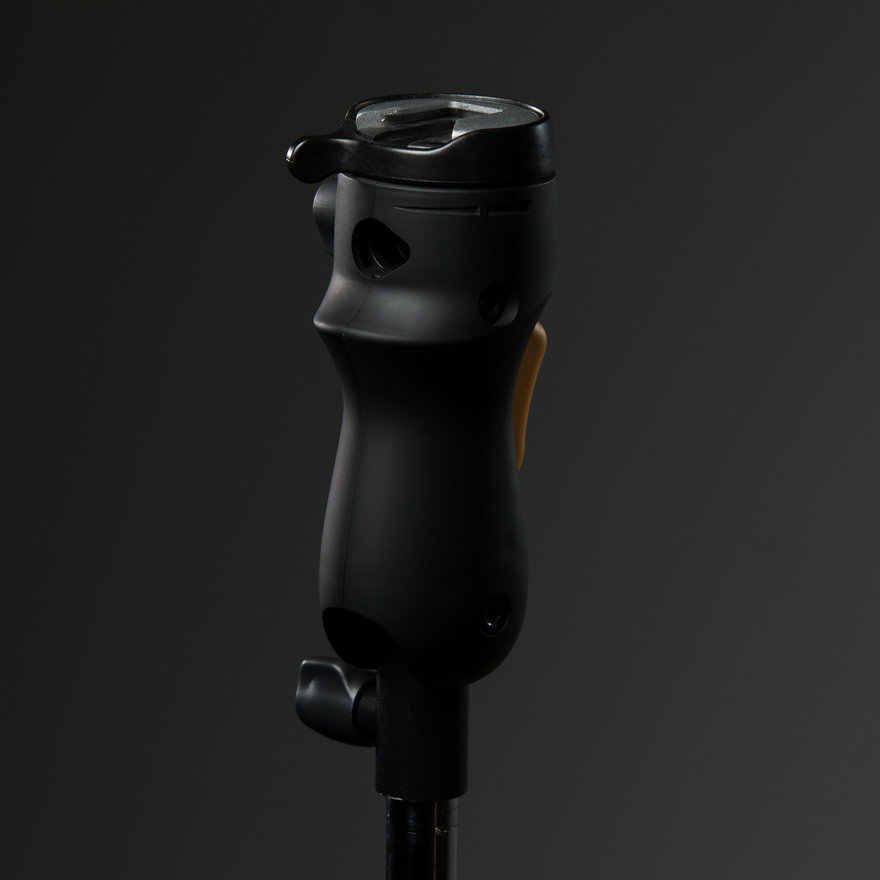 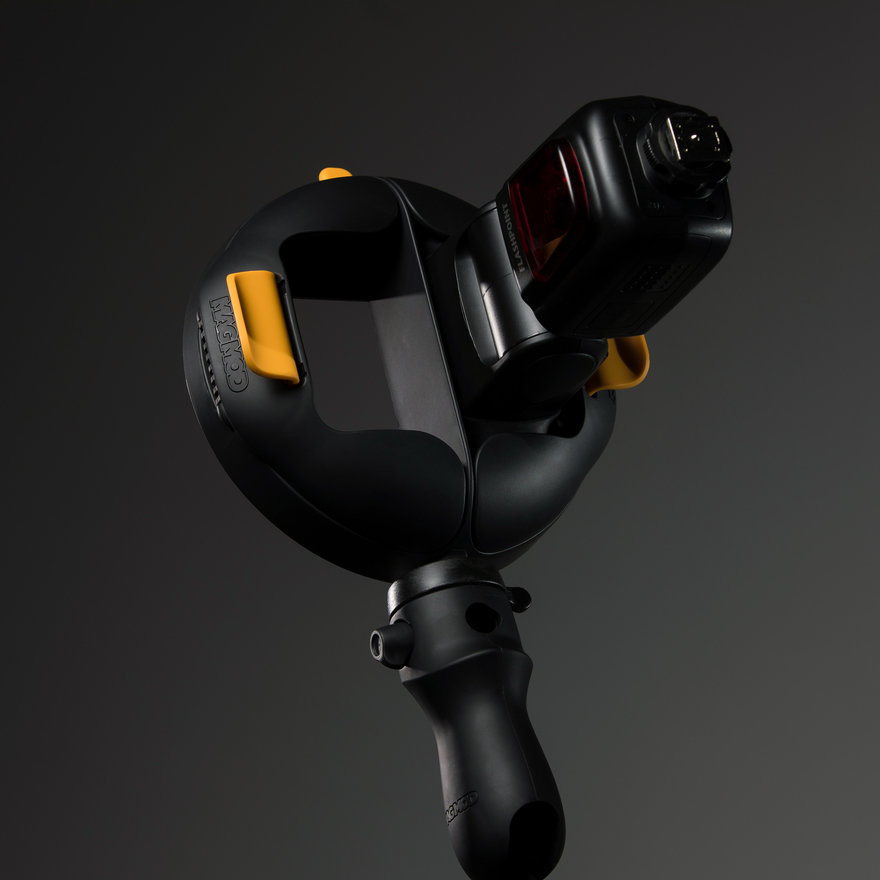 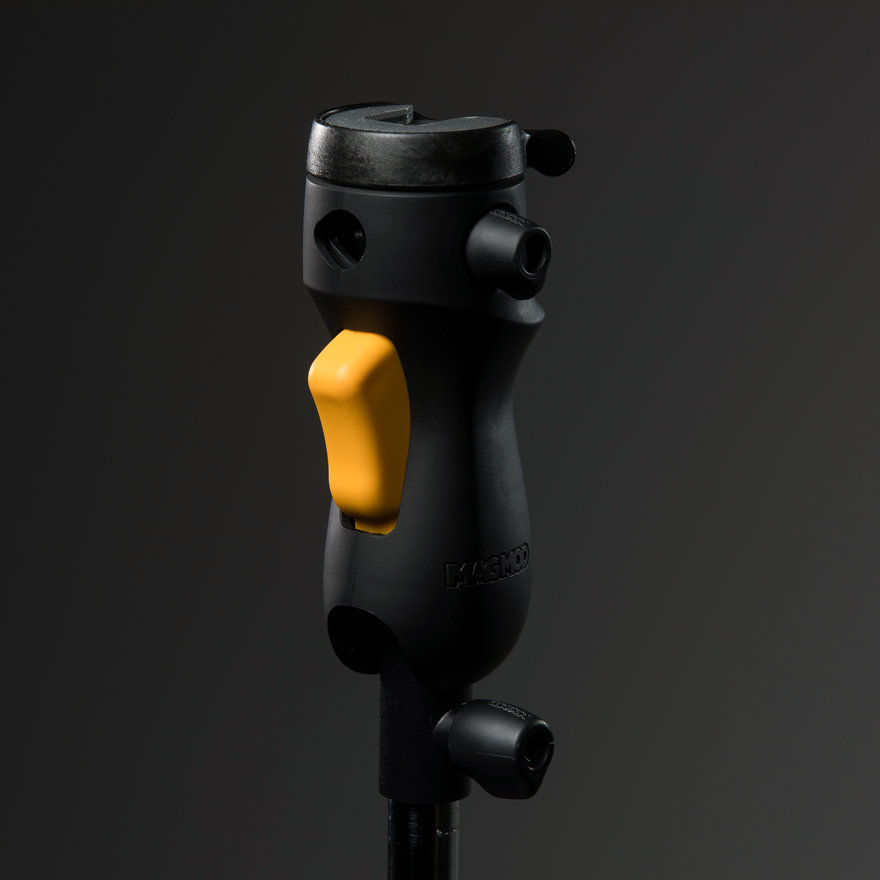 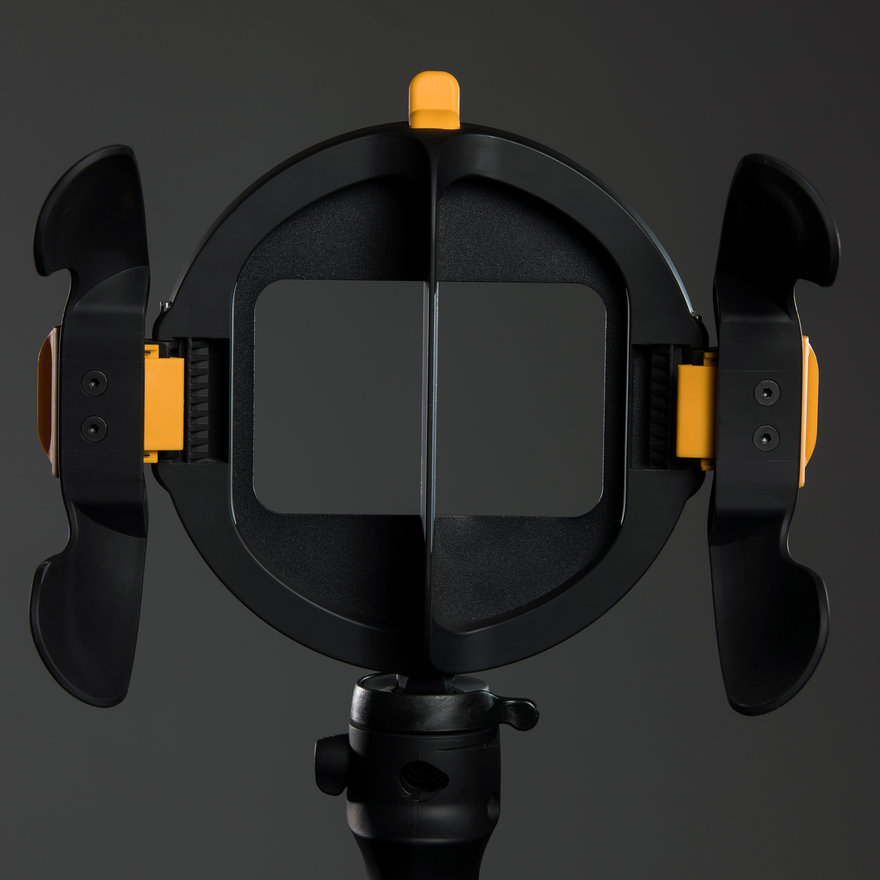 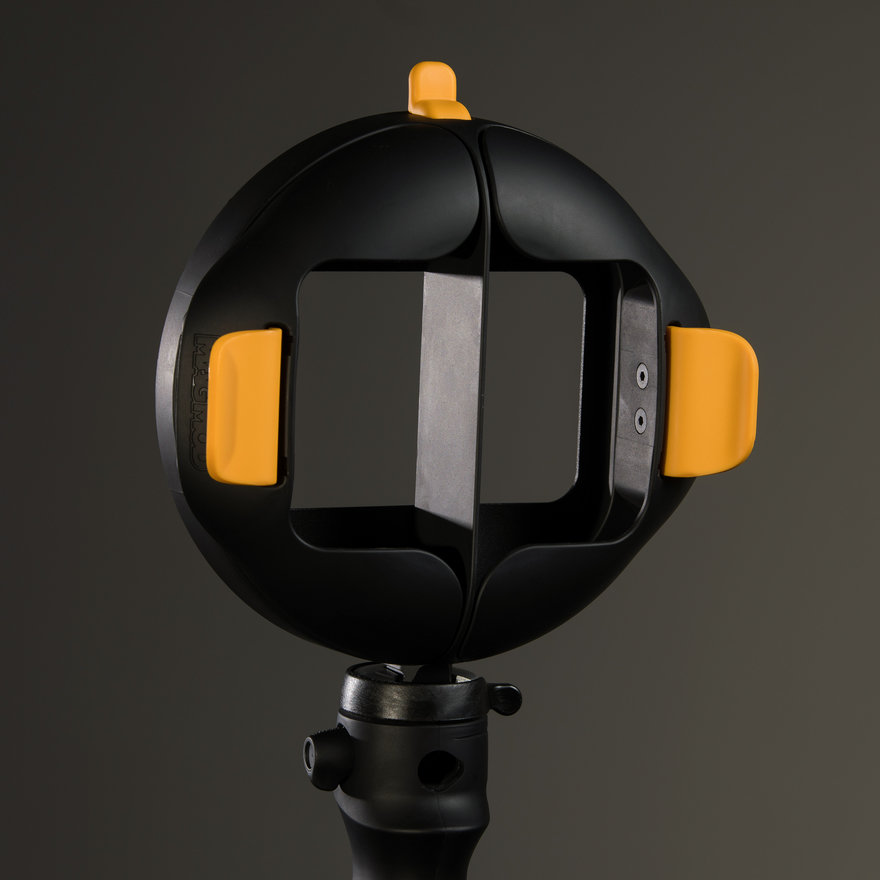 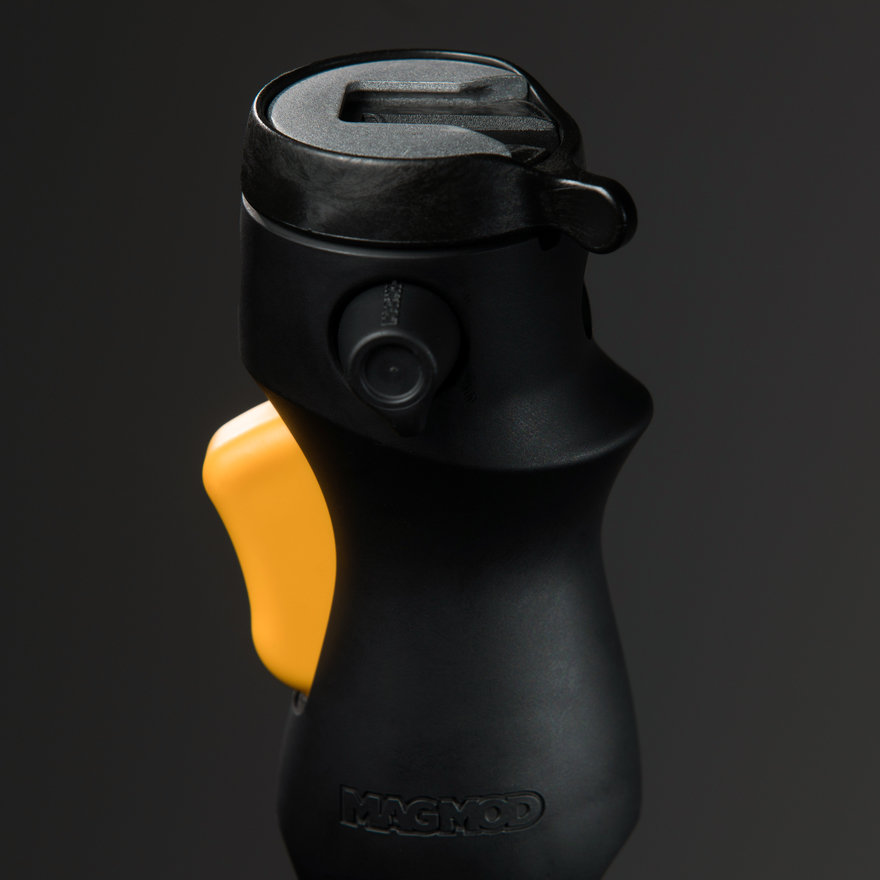 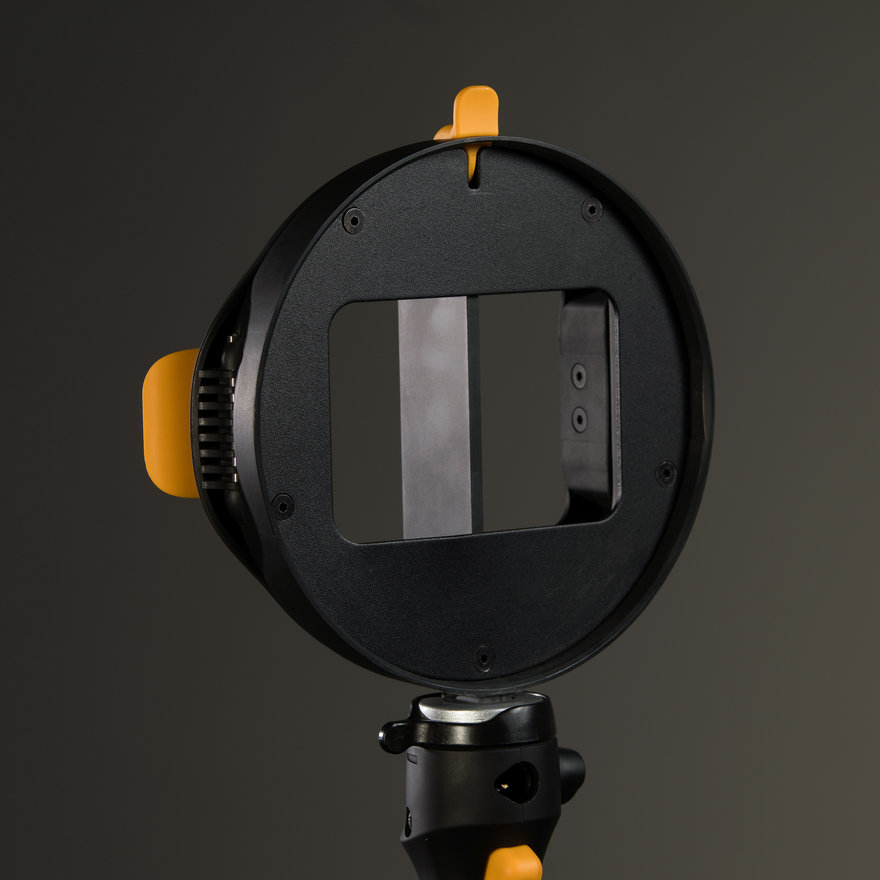 The design of the MagBox system was a unique design challenge for several reasons. MagMod is a small startup in the photography lighting market but has a flawless reputation for creating products that simplify photographers professional lives. Their first products have all been lighting modifiers for speedlights that attach to the "MagGrip", a silicone sleeve that fits around all flashes quickly and easily. The system is adjustable and swappable quickly and easily. The MagGrip and it's counterparts are all made from silicone, and the visual design of them is based on the material they're made from.

The MagBox system was the first step for MagMod into the larger world of off camera lighting. They of course wanted to have the same ease of use as their existing products as well as a visually simple style. The system needed to work with larger lights as well as larger light modifiers, and would have to have significant mechanism to give the support and adjustability to the lighting. This presented a challenge as it still needed to be dead simple and work with minimal apparent "mechanism" to hearken back to existing simple silicone MagMod products.

In addition, it was important that the system visually matched with other products in the brand. We settled on soft black visuals with matte finish to give a high quality feel. And every part of the system that is intended to be interacted with is colored a bright yellow orange. This will alert the user to intuitively know where to reach when adjustment is needed. Every product needed to work well, be incredibly easy to use and look simple and beautiful, but they also needed to feel great as they were being used. Many hours were spent testing and re-designing every aspect to make sure that the feel of using the product was as engaging as the other senses. Each product needed to work on it's own, but perform flawlessly within the system as well.

The MagShoe is essentially the mother of all cold shoe flash mounts and is the backbone of the MagBox system, providing a simple one handed way to hold a flash off camera. Unlike most cold shoes, which focus on being a cheap "throwaway item" the MagShoe elevates a traditionally humble accessory to a well considered object. In quest for cheap, most cold shoe products are tiny, with small tightening and adjusting screws. They are difficult to get at and photographers we spoke with complained of never being sure of the security of their flashes when installed in a cold shoe mount.

In research, we discovered that many photographers were using an assistant to position off camera lighting. In creating the basic form we enlarged the cold shoe mount, making it ergonomic and easy to grip. This means that the assistants could simply hold the flash on its own rather than mounting to a pole and then holding and positioning that. Many models and prototypes were created and tested to find the ideal shape and interplay between the handle on the device and the lock release trigger.

We simplified and moved to a system with a beefy cold shoe connection that would give photographers confidence that the Speedlight flash was in place for good, but was a simple one handed operation to get the flash in and out. This was a significant challenge. After a lot of experimentation we ended on a die cast aluminum piece for strength and a Delrin cinching mechanism for a great feel when the thumb locking lever is engaged.

Next up in the stack is the MagRing. This is an integral part of the MagBox system as it holds up to two speedlights (with the existing MagGrip silicone sleeve installed) as well as the MagBox soft box, or other MagMod magnetic modifiers. This can be placed into the MagShoe in place of a single speed light, or any other place a flash foot can go because we took the standard mounting and beefed it up using machined aluminum co-molded to a glass filled nylon housing. This allows a user to install two flashes and get twice the light output. Again, the task was taking the overly complicated brackets, knobs and screws with traditional ring mount products and create something that was simple and easy to use. We always wanted to pull existing MagMod products into the system, so using the MagGrip silicone grip to hold the speed lights in place was a no brainer.

One major paradigm shift on this product is that most flashes are held in place in mounts at the bottom, using the flash foot. This means that any adjustment in direction or angle of the light must be done by interacting with the flash as well as the ring. We moved the connection point of the flashes to the front. So they moved in unison with the ring and eliminated a redundant adjustment point, making the product dead simple to aim. The locking doors went through several evolutions to arrive at the final product. We tried using friction hinges to hold flashes in place, but those weren't reliable enough. We ultimately settled on snap locking doors, and then set about creating a locking feel that sounded and felt great to give important feedback to users and send the message that flashes are safe and secure.

The MagRing "business end" is a steel plate that integrates with already existing speed light modifiers as well as the new MagBox via easy on / off magnets. The magnetic grip between the ring and soft box is so strong that severe shaking or gale force winds can't separate the MagBox from the MagRing. We included a spring loaded cam lever to separate the products just enough to reduce the magnetic force and make it easy to pull off.

When we started the project, we planned on the system holding two of the largest speed lights at the time. But in development, Godox released the AD200, a huge speed light that was never meant to be on top of a camera. Mostly battery it nearly doubled the weight of the largest speedlights. After some mid project adjustments, the MagRing can take two of these like a champ and give users near the power of a studio strobe with extreme portability.

The crowning piece of the system is of course the MagBox. It is the only soft box that has no obstructions inside. This reduces the amount of bounces the light needs to do and therefore increases the overall light output of the softbox. This further allows the system to give studio quality light on the go. The focus diffuser is a huge departure from any photography product. It actually uses nano crystal coated plastic sheet to focus the light, giving a distinct visual style to the light and also requiring less overall light output to light a scene. Even in bright sunlight with a couple speedlights, photographers can still get beautiful directional light in their shots.

The MagBox was painstakingly designed to be simple and easy to set up, with a simple press in of the central actuation levers. The box uses tension in the fabric to create a satisfying "pop" as the arms reach full extension. It is also the only soft box that allows gels to be inserted into the box to adjust the color of a flash on the fly. In research, we found that many photographers were taking colored vinyl sheeting and taping it to the outside of their soft boxes to achieve this color. This inspired us to create simple hard backed colored vinyl and allowing it to be placed inside the soft box and get that color in seconds of setup instead of minutes, and most importantly, no scotch tape needed.