Diffusive Geometries: Vapor as a Tectonic Element to Sculpt Microclimates in Architectural Space

An essential function of architecture is to control the environment around us. In practice, interior climates are discretized into self-contained units where wetness is kept in wet spaces and dryness in dry spaces. Contrary to nature's weather patterns, architecture is often static, with no diffusion in between. As a result, weather conditions that exist in nature are not experienced inside. Vapor is a medium to bring microclimates that exist outside into architectural space in Diffusive Geometries: Vapor as a Tectonic Element to Sculpt Microclimates in Architectural Space. The unique characteristics of vapor allow users to modulate visibility, create cooling gradients, and produce spatial patterns in a controlled manner. This project encompasses three main elements: a point – vapor vortex ring, a line – vapor tornado, and a plane – vapor wall. The focused and diffused conditions of vapor enable both localized and global states to transpire through soft boundaries. 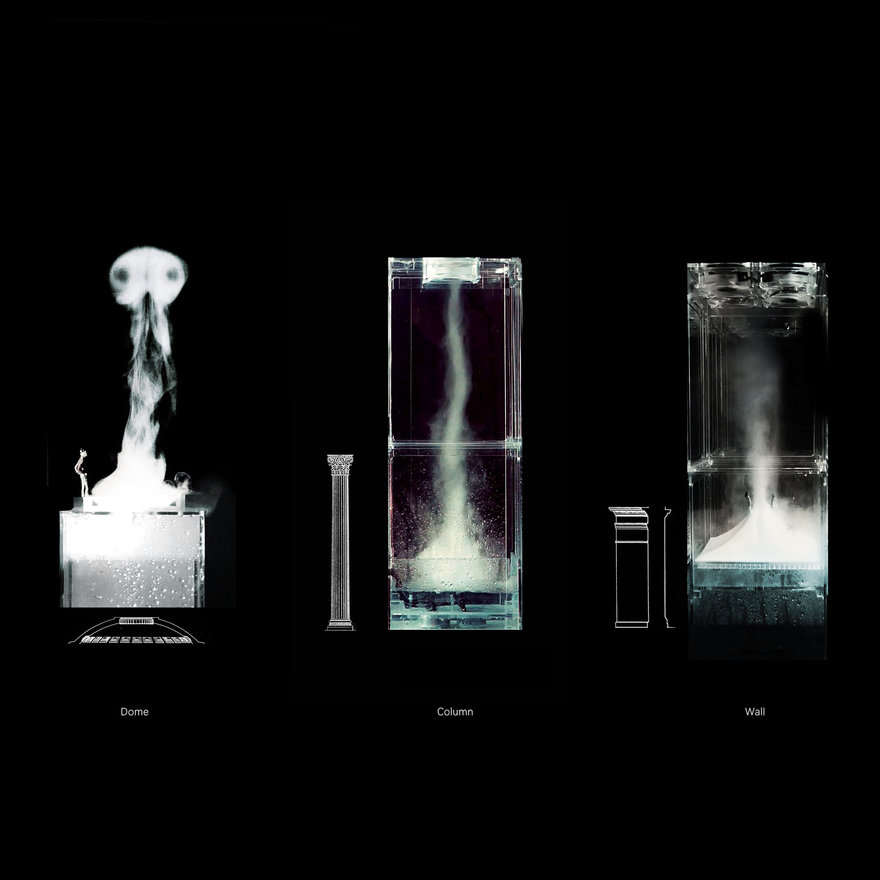 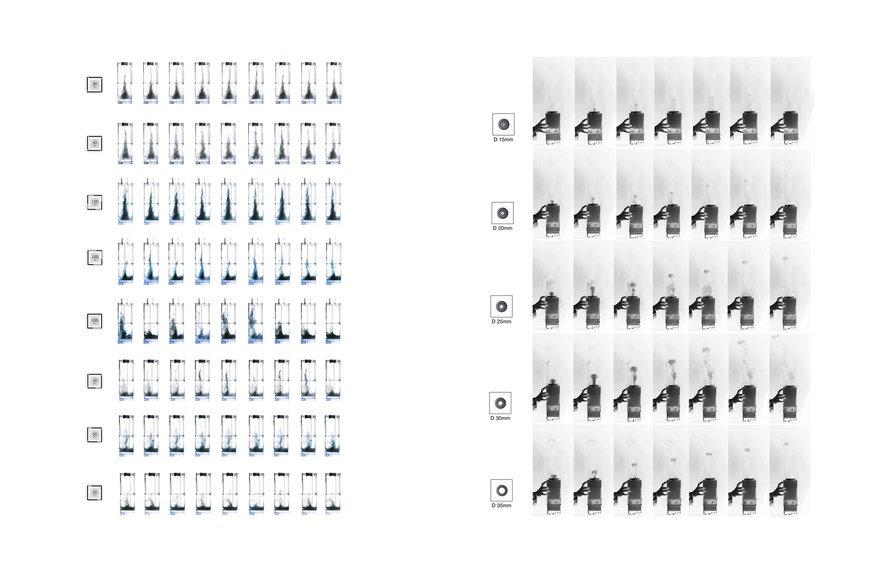 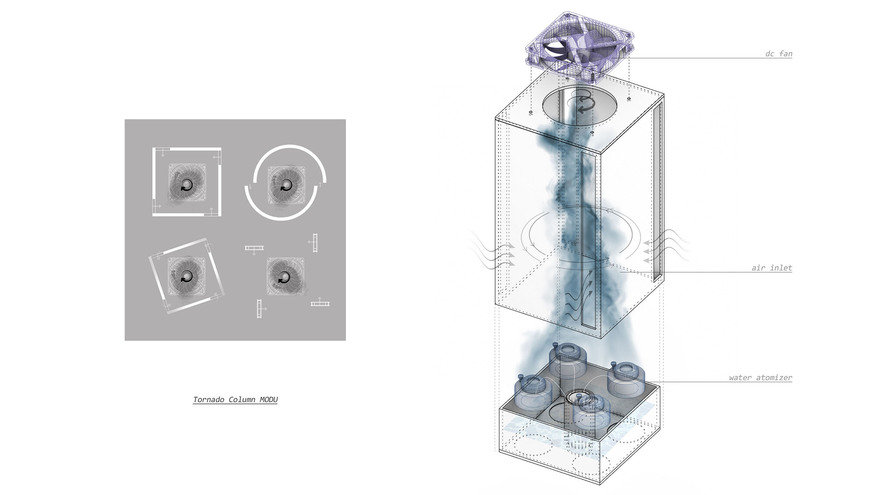 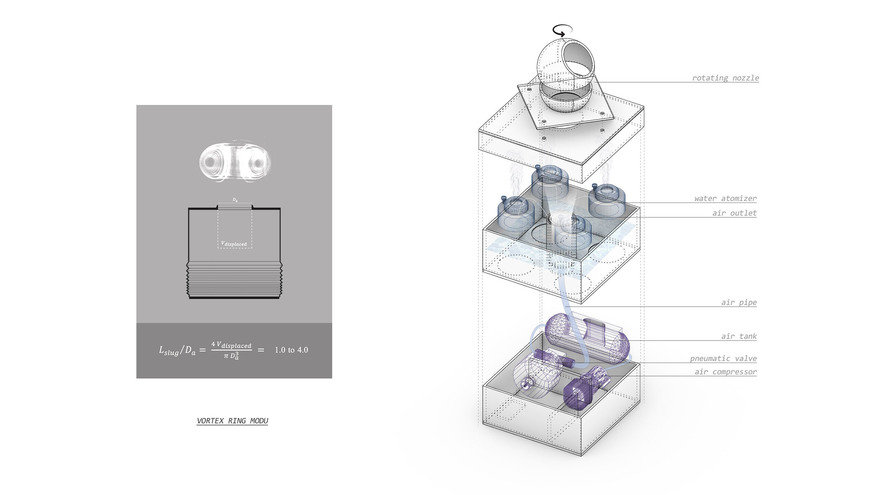 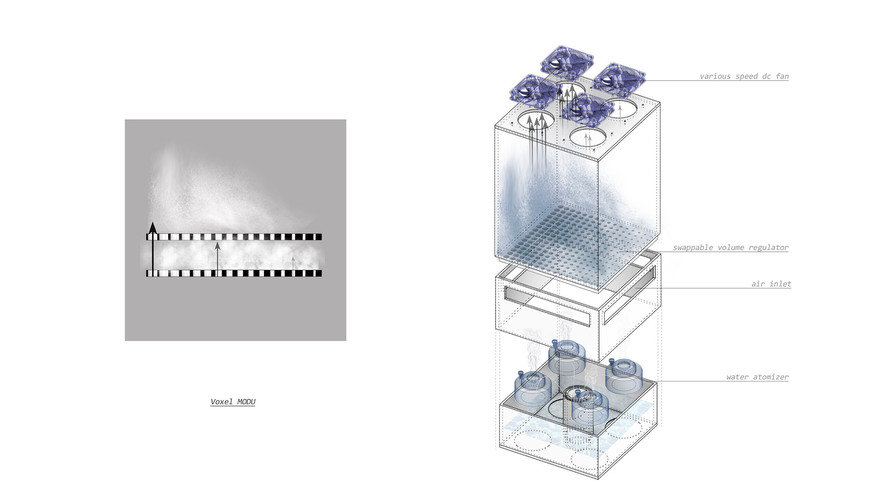 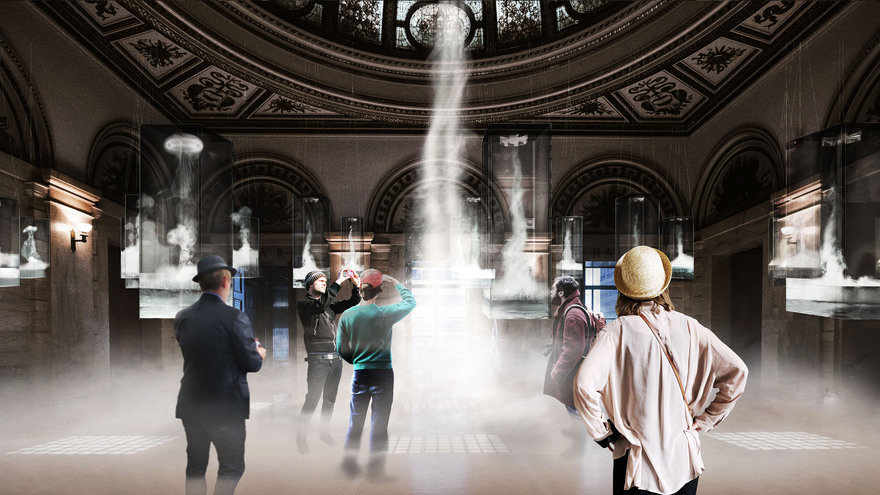 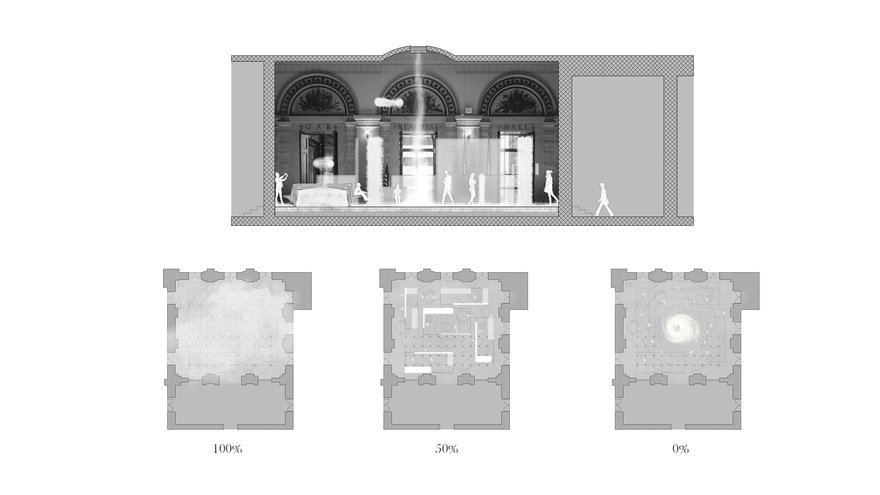 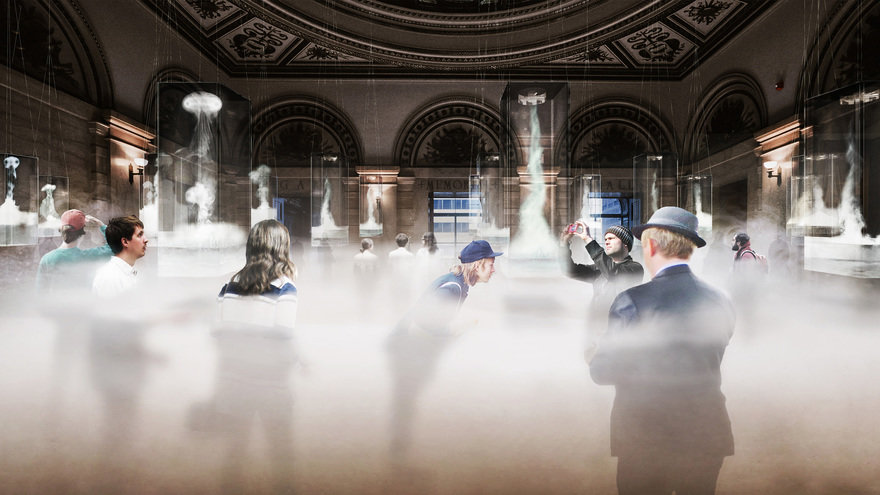 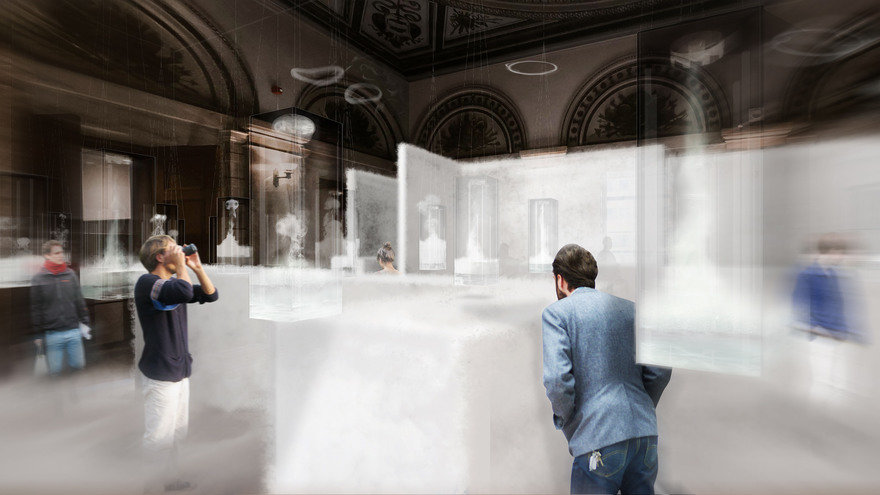 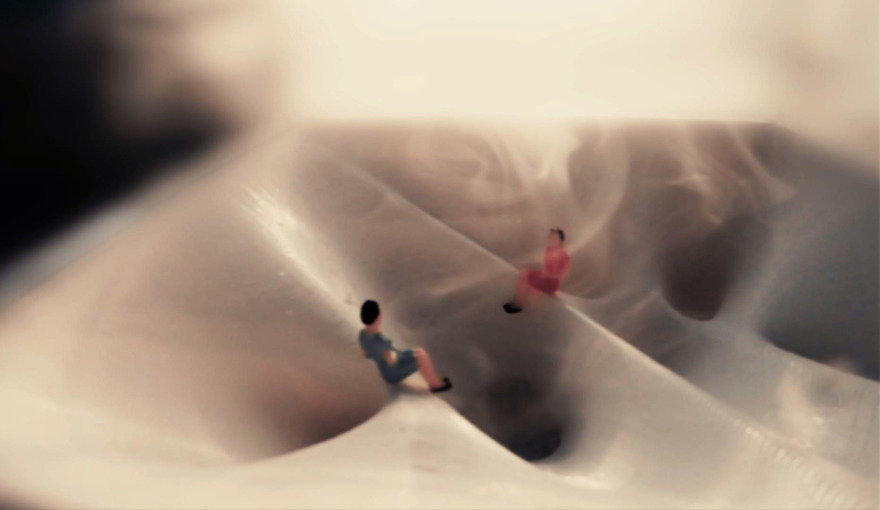 Architecture primarily serves a way to create and control the environment around us. Unlike natural weather, climate conditions in architecture are often static and binary, with no diffusion in between. As a result, sensory experiences that are directly accessible outdoors, like atmospheric quality, diffusiveness, and flow are completely excluded from the indoors. The climate is discretized in space into strict self-contained, functional units, where wetness is kept in wet spaces, and dryness is kept in dry spaces.

These weather characteristics have certain architectural qualities that we can recreate. Vapor, for instance, can act as a medium to bring the outdoor experience inside. By varying the vapor density, we can isolate visual spaces and create a sense of privacy and intimacy. Vapor can become a new tool for architects to use to control the organization of space.

In this project, we use vapor as a tectonic element to modulate visibility, create cooling gradients, and produce spatial patterns in a controlled manner. Altogether, the indoor evolves into defined spaces of micro-climates. Three main elements make up this project: (1) point via a ring, (2) line via a tornado, and (3) plane via a wall. Focused and diffused conditions of vapor enable both localized and global conditions through soft boundaries.

Our prototype vapor diffusers are constructed with atomizers, fans, acrylic containers with designated openings, 3D-printed parts, and electronics. By altering fan speed, size of section openings, and compression volume, we sculpt the vapor and control the global condition of how our visual system perceives reality.

Imagine a future where architects sculpt not only their ideal space but also the weather inside: one corner feels like the Saharan Desert, while the other behaves like the Amazon rainforest. In one corner, an early morning mist greets the contemplative mind, and in the center space, a focused tornado vapor attracts a gathering crowd. The interior space no longer acts like static and binary units—with clear boundaries like rain for the shower, snow for the fridge, or sun for light—but a dynamic, diffused, and phenomenal experience.

A focused packet of vapor that travels through space, or "toroidal vapor vortex", is constant air flow around a center axis. In this circulation, the packet travels along the axis perpendicular to the toroid. The overall circulation makes the vortex ring less likely to disperse while traveling along the axis. Thus, the ring tends to maintain its size, shape, and momentum for a long distance.

To generate this form, vapor must be pushed out from a watertight chamber through a circular aperture. Compressed air, elastic force from the membrane, and magnetic force from the voice coil serve as the actuation to generate the push. The stability of the vortex depends on the volume of air pushed out the velocity of the piston and the diameter of the aperture. Usually, a stable vortex ring requires a sudden puff of air to push out in a very short period of time.

To generate a focused beam that rapidly rotates like a tornado, a shear levitating force must emit from one end. This area that holds less air pressure usually comes from a high altitude and eventually forms the head and neck of the tornado. On the other hand, ground conditions are required to keep this highly volatile phenomenon persistent. In a stable tornado system, negative high-pressure air is drawn uniformly from all directions, forming a counter-clockwise rotation on the outer realm of the tornado.

In the vapor diffusion system, the vapor is generated by ultrasonic atomizers. The shear levitating force is generated by a DC fan to trap the generated vapor. Ground condition is created by symmetric openings on the container to allow positive pressure to flow into the system in a counter-clockwise fashion.

Above the tornado mechanism, the outer boundary condition can be adjusted with sliding doors and replacement of the walls on all four sides. A removable DC fan with PWM capacity is used to generate the central force. In this setting, the relationships between the stable formation of the tornado, the center airflow speed, and the boundary conditions are studied. Each boundary condition is tested with 30cfm, 40cfm, 50cfm, 120cfm, 150cfm, and 200cfm fan speed, and is recorded in 120fps video.

In order to create consistent homogeneous vapor volume in an enclosed environment, two sets of identical DC fans (2 pushing fans, 2 pulling fans) are used at the inlet and outlet of the airflow from the outside. These sets run symmetrically to each other to decrease the turbulence generated from within. With this setting, different densities of vapor can be controlled at different heights in the system. The matrix of basic constructions with swappable external walls allows unique conditions within the modules.

Imagine the endless potential for diffusive architectural tectonics through the modulation of visibility. Vapor offers a new medium that can be useful for architectural settings, like in a bath or a park. With 0% vapor in the environment, people move about randomly on site. When global vapor density reaches 10%, people start to form groups on a small scale. When vapor density is at 50%, grouping behavior becomes sculpted by the vast vapor geometry. At 80%, activities once again distribute randomly on the site. A massive focused local event can also be created by vapor tornados. A tornado column flowing from the center of the site focuses diffused vapor to create immediate visibility. In this condition, people are likely to be curious and gather around the tornado column.

Branching from its artistic value, vapor offers a practical advantage to its viewers: a sense of privacy. Similar to how a wall creates discrete rooms, vapor creates private space through a varying degree of density and range of visibility. Vapor provides a visual, diffusive way to control the sense of privacy and isolation. An ideal example of vapor-organized activities is in the park: people exist in multiple kinds of groups: from large crowds at an event — localized vapor tornado, to small groups and individuals who share a contemplative relationship with the landscape — diffused vapor islands.

Vapor is a versatile, controllable medium, that offers invaluable qualities to an architectural space. The future development of this research will focus on implementation into the real world on an architectural scale. Furthermore, increased control of this medium for greater precision and lower maintenance will be studied. Overall, vapor will go on to empower architects to not only sculpt spaces but also sculpt the climate inside.