Queer World is a co-creation workshop as a part of the research for my graduate thesis work "Queer China" where participants use a game board to map the power dynamics among stakeholders in the system of LGBTQ.

The purpose of the workshop is to test my hypothesis, which is a system map of the LGBTQ community in China; gain insights from participants' personal experiences and perspectives, and finally, find design opportunities. 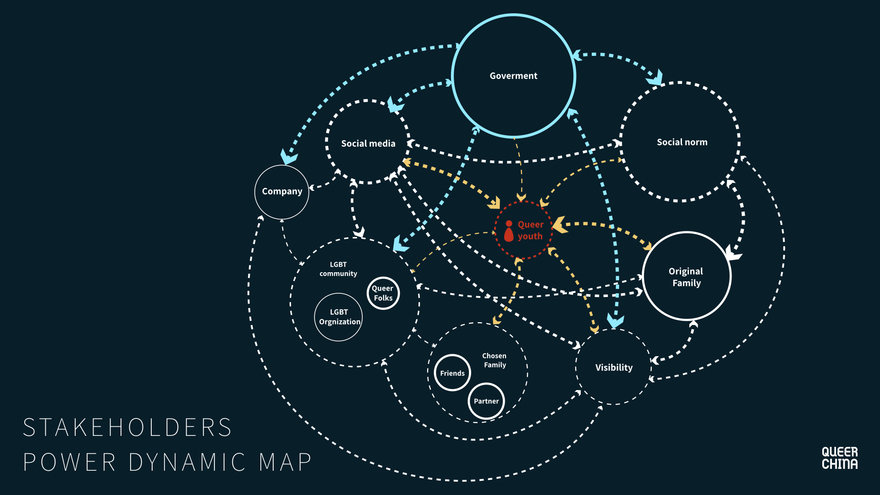 System Map Hypothesis I created this system map based on the information I gathered from Subject Matter Experts. It's the first version and the hypothesis I wanted to test in Queer World. Qixuan Wang 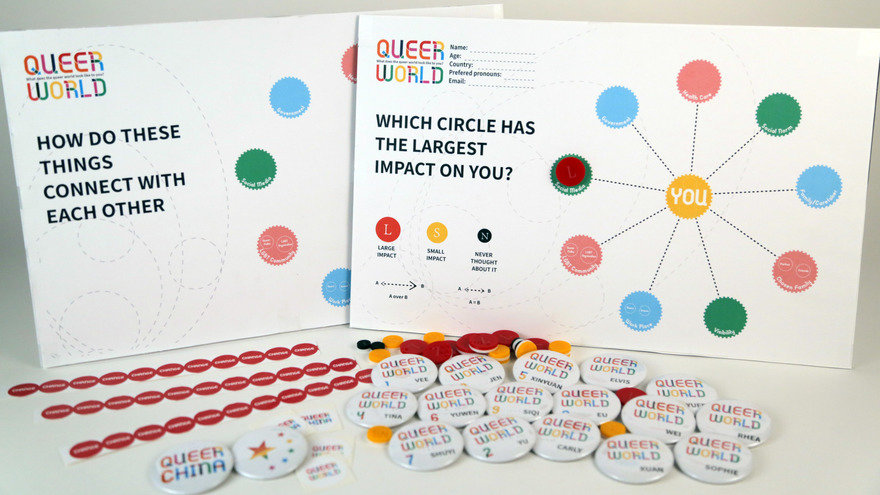 Design assets This image shows all the design assets I designed and created for Queer World. The game board and the base has magnets on it which added fun for participates. I also made a name button for each participant to create a personal experience. Every asset has branding Elements on it, which created visual and experiential coherence. Qixuan Wang 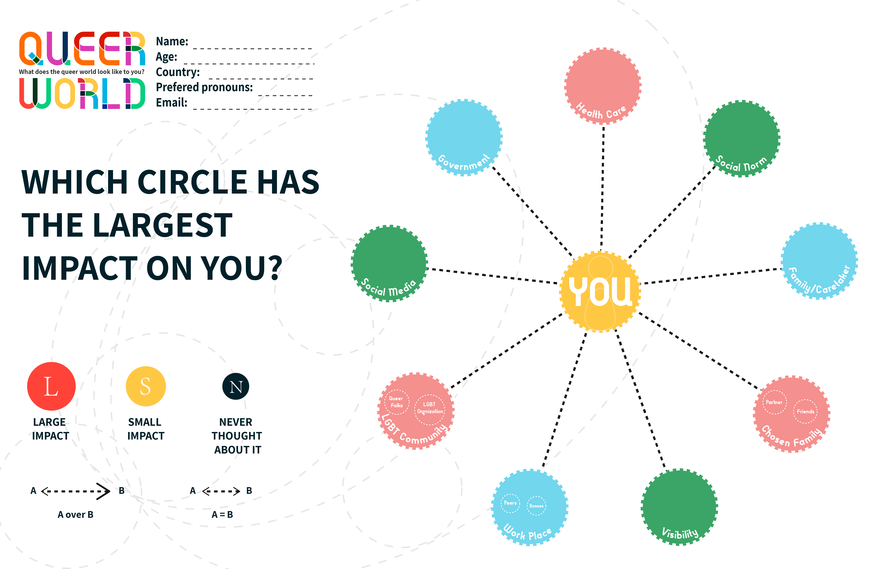 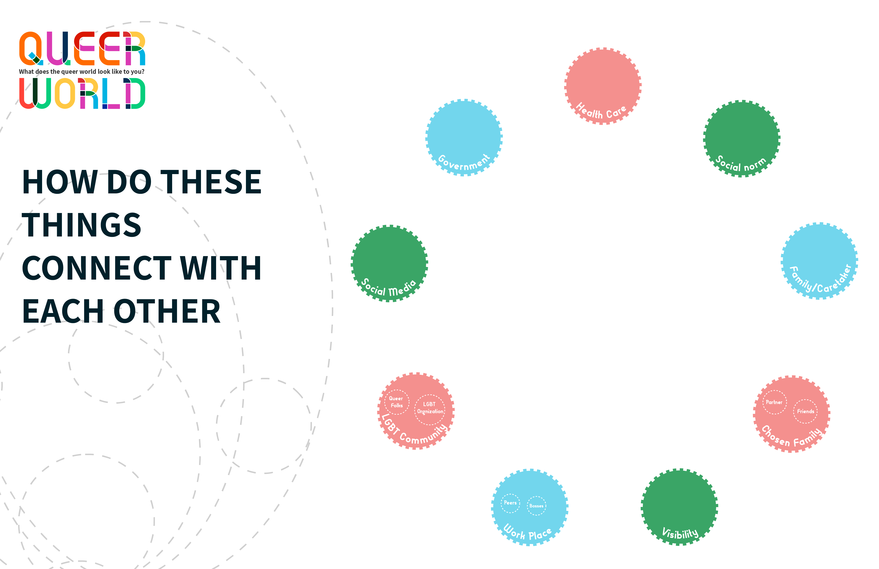 How do these things connect with each other? This board is the prop for "4.Where do you see the connections" in the user journey. Qixuan Wang 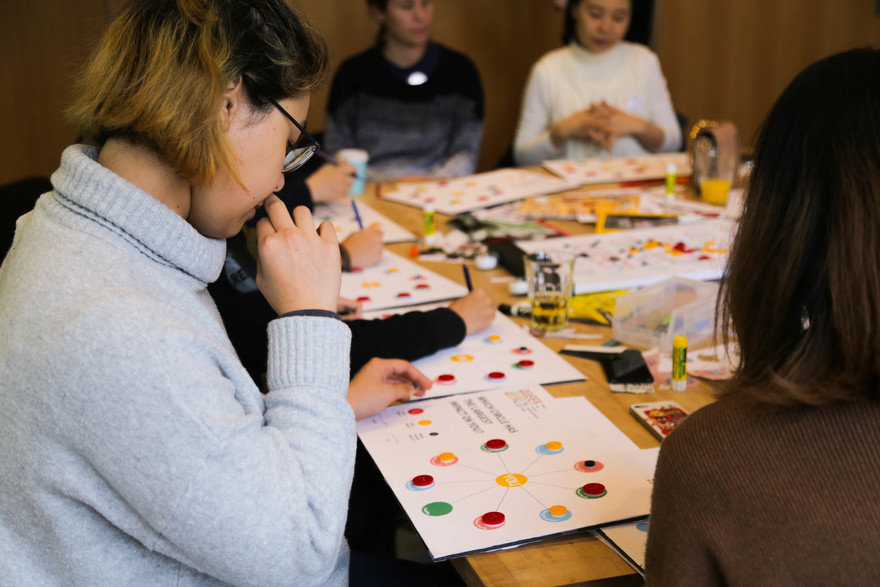 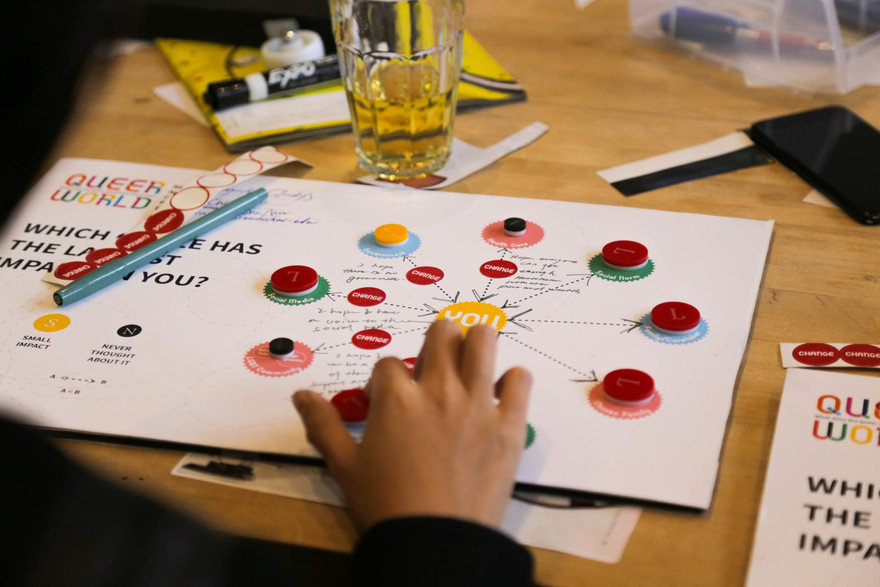 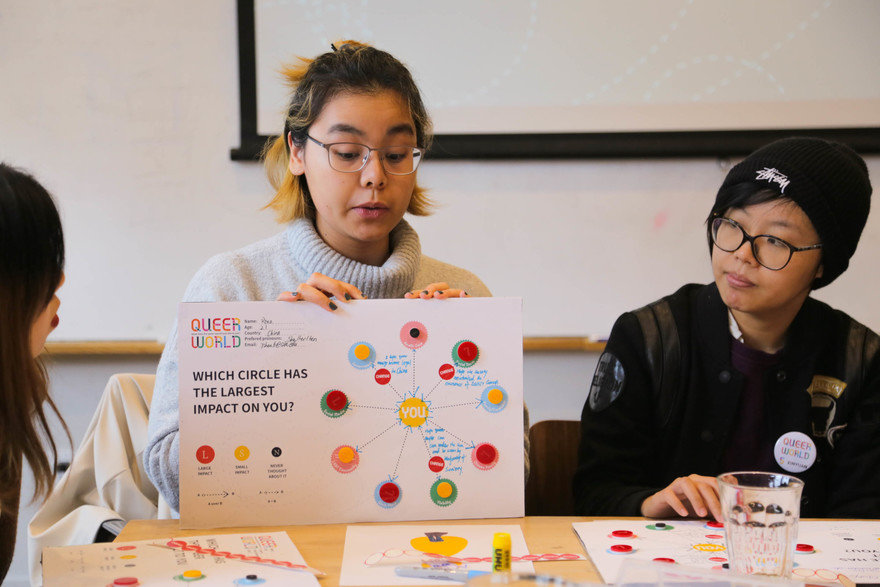 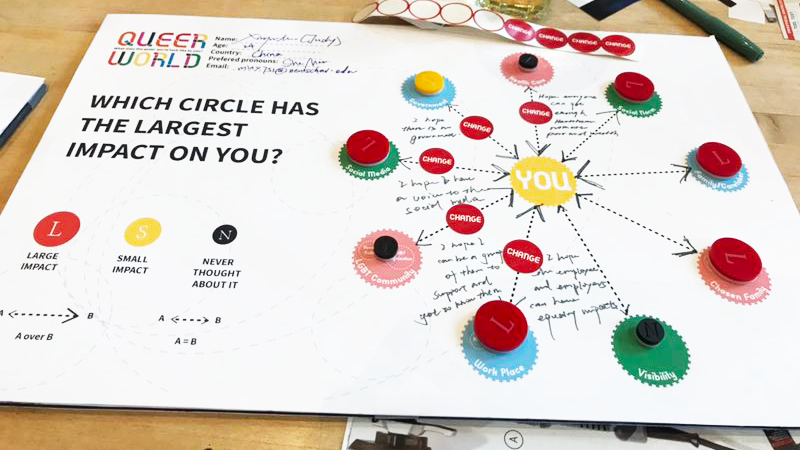 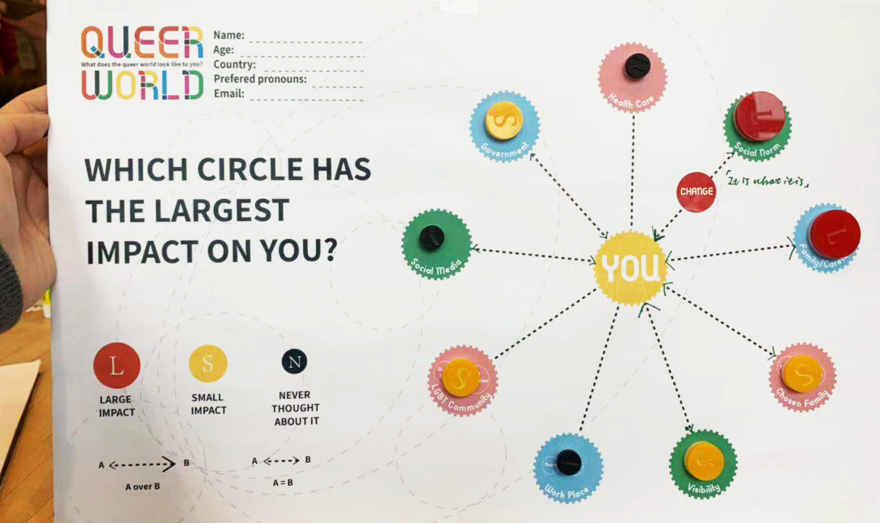 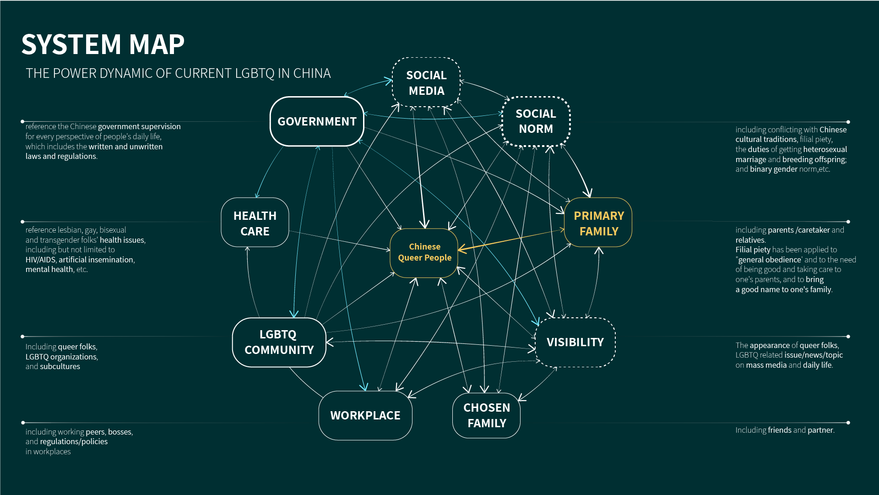 Refined system map As one result of the Queer World, I refined this system map based on what participates have share. Qixuan Wang 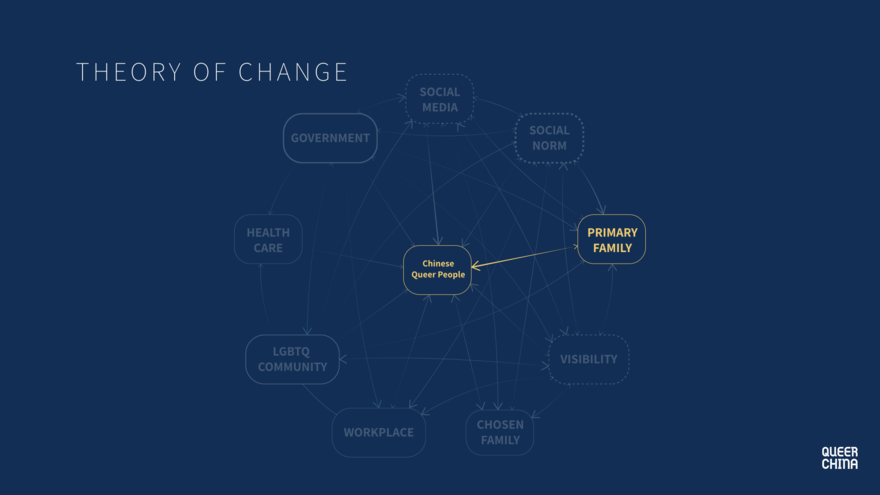 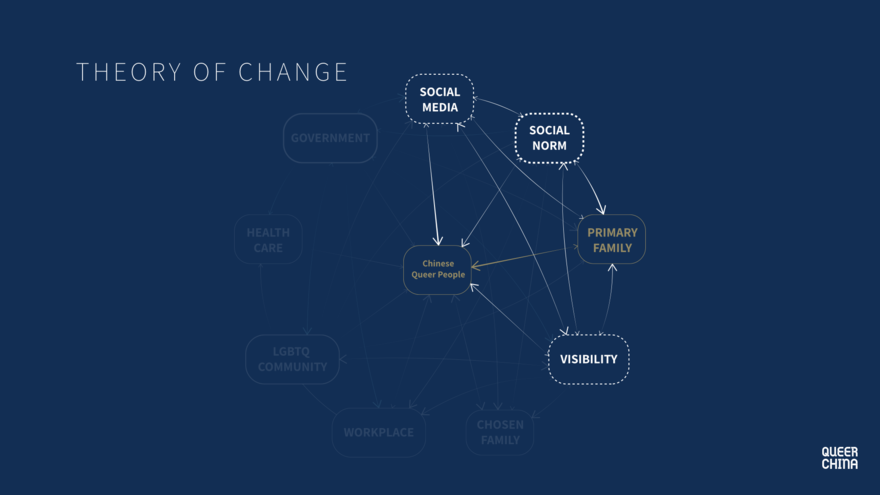 1. The rules of the Queer World

The workshop started with an introduction of the game rules. There are no right or wrong answers in this workshop: the Queer World needs your point of view. I hope everyone can participate with an open mind and be respectful to each other through the experience.

I set these rules for two reasons. On one hand, my thesis started with the argument that there is discrimination between different subgroups within the LGBTQ community. For instance, trans folks and bisexual folks are facing discrimination from straight people and queer folks. So it is important to remind the participants to have an open mind and be respectful to each other because that is what we, all queer people, should do all the time.

On the other hand, I want to create a safe, fun, easy and relaxed atmosphere to make the participants feel they are heard.

Then as an ice-breaker, the participants were instructed to create their own characters by cutting images from magazines and team up to introduce themselves. Besides the idea of gamification, these characters they created could be used as tools to make it easier and more fun for participants to get to know each other, such as their names, hometowns, preferred pronouns, occupations, and personalities. And it worked, people started smiling and laughing while they introduced their characters to each other.

3. Which has the biggest impact on you

After people got relaxed, they got to create and explore the Queer World on a game board. The first question I asked was, among all the stakeholders, which had the biggest impact on you, choosing between "a large impact", "a small impact" or "never thought about it".

Then among the stakeholders that they believed had an impact on them, I asked them to consider whether they could also make an impact on those stakeholders. For instance, I felt like I could barely change the social norm right now, I would draw a bigger arrow to "you," a small one toward "social norm."

After that, using the board they had created as a prop, they compared their choices in a group, discuss why they made those decisions, and started a dialogue.

4. Where do you see the connections

The second part is about connections inside this system. I asked them to draw a line between the stakeholders that had a connection with one another.

Lastly, the participants pointed out which they would like to see or make changes among all the connections

My current MFA thesis, "Queer China," explores the bias, challenges, and relationships within the LGBTQ community under the unique cultures and policies of China.

In China, there is no accurate number of China's LGBTQ population, but the common estimate is that they represent 5% of the population. There are not a lot of data around the public attitudes toward the LGBTQ community either. Among the only three data point I could find, only 30 percent of people who think being LGBTQ is a "normal' thing. Due to that, similar to being queer in the rest of the world, LGBTQ people are facing discrimination, less educated, lower job stability and a higher unemployment rate, and lots of them under depression. While those issues are existing, the LGBTQ movement in China started around 1970s-1980s. As the globalizing happening and the movement going, China achieved a couple of breakthroughs. in 1997, Decriminalize homosexuality by repealing the hooliganism laws, and in 2001 the Chinese ministry of Health removed the LGB from its list of mental disorder. But there are no laws that protect queer from discrimination and they can not get same-sex married.

"Sexual and gender minority people, still have very low visibility within society. While they live across China and work in all types of occupations, only an extremely small number of them openly disclose their sexual orientation, gender identity or gender expression in public spaces such as at school, at work or as they participate in religious activities. Even at home and in the family, those who manage to be completely "out" are in the very minority. At the same time, sexual and gender minority content scarcely appears in the mainstream media, such as in newspapers, magazines, or on the radio, the television, and in movies, which still lack not only positive but any portrayals of diversity."

This is the conclusion in Being LGBTI in China: A National Survey on Social Attitudes towards SOGIE (Sexual Orientation and Gender Identity/Expression). This report is the very first large-scale public survey on the LGBTQ topic in Mainland China. This finding did not surprise me, but it was heart-broken to read because it echoed what I saw and experienced in my daily life. For example, 74.9 % of sexual and gender minorities have not come out in the workplace, and 50% have not come out at home and school. One thing to note is, the sample of this survey deviates towards LGBTQ friendly population, which means that the reality is worse. Due to the low visibility and misunderstandings. In general, around one-third of the respondents prefer not to be around LGBTQ people. 70.6% of non-sexual minorities and 61.7% sexual minorities would not accept it if their children were transgender. Attitude leads to action. These misunderstandings manufacture in discrimination."Over half of the minority respondents reported that they used to be unfairly treated or discriminated against due to SOGIE. Around 40% reported similar experiences at school. The occurrence of discrimination in the workplace and religious communities is relatively low, at 20%". Those numbers show the difficulties that the LGBTQ population is facing in daily life. To further understand the landscape of being LGBTQ in China and what causes these situations, I conducted and assembled cross-disciplinary research from adult development, sociology, and psychology, including 30 first-hand interviews with subject matter experts, therapists, activists, and queer communities. Based on the information I gathered from interviews, I created a system map that shows the power dynamic of stakeholders in LGBTQ of China.

The system map I created is mainly from the Subject Matter Experts point of view, but the design should be user-centered. I wondered if this map is also true for Chinese Queer People. That's why I started planning and designing this co-creation workshop. On the one hand, I wanted to test the power dynamic system map I created. On the other hand, I wanted to gain insights from participants' personal experiences and perspectives, and finally, find design opportunities.

As one results of this co-creation workshop, I refined the system map. Also, I gained two main insights which helped me narrow my thesis focus and became the guidelines and principles of my thesis.

1. In China, the family creates the largest source of stress for Queer People

Even different families have different situations, but in the workshop, all people shared that their families have an important influence on them. And in lots of situation, the impact is negative. This result speaks to my secondary research. Only 15% of Chinese Queer People have chosen to come out to their family. Among them, about 56% have been through unfair treatment and discriminated against by their family members. (Being LGBTI in China: A National Survey on Social Attitudes towards SOGIE, 2016)

This reflects the main difference between China and lots of western countries, where religion is the biggest barrier. In China, the primary family is the biggestone. Based on this, later on, I narrowed my thesis as Queer China, Propose to empower Chinese Queer Family.

2. Chinese Queer People is disconnected from the LGBTQ community

Another big take out is the disconnection between the LGBTQ population and the LGBTQ community. Xinyuan, one of the participants, shared that "I want to know where the LGBTQ communities are, what they are doing and how I can help them." Which reminded me another quote from a researcher, Sphinx Hui. "In China, queer folks, especially those who suffer from mental health issues, don't know there are resources that exist around them, where they can ask for help." As you can tell, in China, people who need help from the community not find it, and who wants to help can not reach to it either.

As a result of Queer World, Co-creation Workshop, I narrowed my thesis to focus on empowering Chinese Queer Family. To do so, I am going to seeking opportunities from both external and internal ways. For the internal way, I will directly design for Chinese Queer People and their family. As for external, I will design to increase the visibility to change the social /culture norm and created a more friendly environment, so that Chinese Queer Family can be empowered from outside.