BMORE Than The Story

The death of Freddie Gray and his treatment by police sparked anger, protest, and violence in Baltimore during April 2015. National and local media implicated area youth in the crime and destruction, whether they committed it or not. Their overriding narrative was pejorative and full of scorn. The students at Augusta Fells Savage Institute of Visual Arts (AFSIVA), a public high school in West Baltimore, as well as those attending nearby schools, lost control of how they wanted to be defined and regarded. The negative messages lowered the spirit of an already struggling community. To address this, we created BMORE Than The Story, a collaboration between AFSIVA students and graphic design seniors at the University of Maryland College Park (UMD). Through this project we sought to leverage art and design to help these students regain their narrative and empower them with how their artistic talents might create positive change in their community. We wanted the youth to be able to tell their side of the story in ways that were authentic to them.

These students worked together to create an exhibition that addressed police brutality, disenfranchisement, structural racism, stereotyping, violence, and the one-sided media portrayal during the 2015 Baltimore Uprising. To decide how they want to represent these issues, the students had to engage each other in open dialogue about topics that many adults are reticent to discuss. They crafted compelling messages and objects and created participatory elements to invite visitors into conversation about these topics.

The Reginald F. Lewis Museum of Maryland African American History and Culture hosted the exhibit April through September 2016. In addition, the AFSIVA students performed for the exhibit opening and the museum hosted a series of programming events that gathered other youth to share their stories about critical community issues as well. In addition, local and international media outlets showcased the exhibit in their broadcasts.

In exit interviews, the high school project participants spoke of how the project gave them a sense of agency to address the violence in their communities, how they learned how to employ their artistic skills to advocate for the change they wish to see, and how they feel less isolated and alone in their struggle for this change because of the collaborative efforts of the college students. The exhibit and its high-profile venue served to validate the high school students' experiences and foster youth dialogue about their struggles in Baltimore. ASFIVA students who had not been a part of the project talked about the positive aspects the project yielded for their school as a whole. The college students learned how to co-design with a community different from their own and how to unpack wicked problems and divisive issues. This project enabled an underrepresented community an opportunity to tell their story, validated their struggles and experiences, and empowered them through design and creative making. 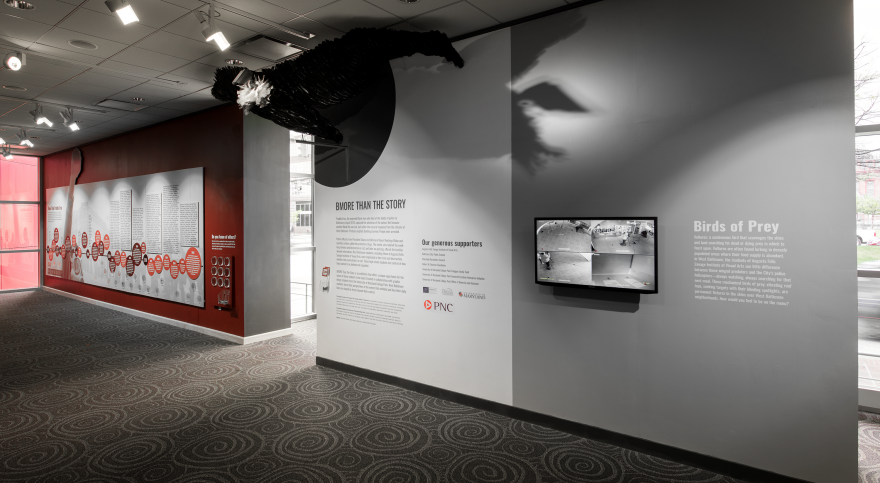 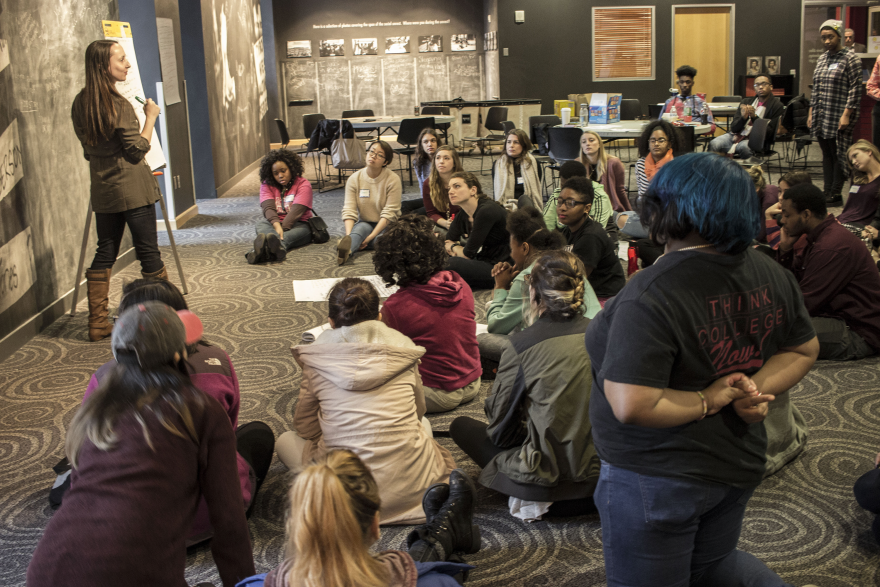 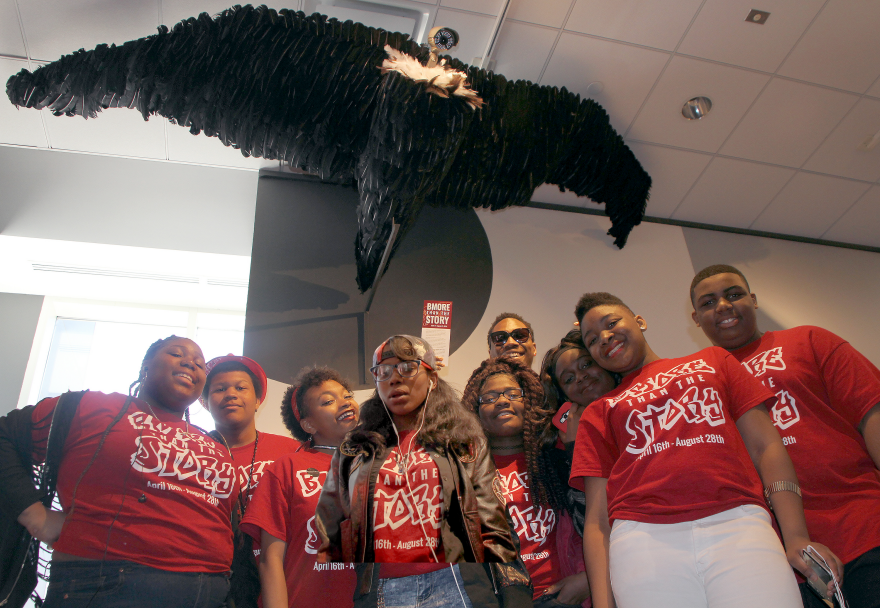 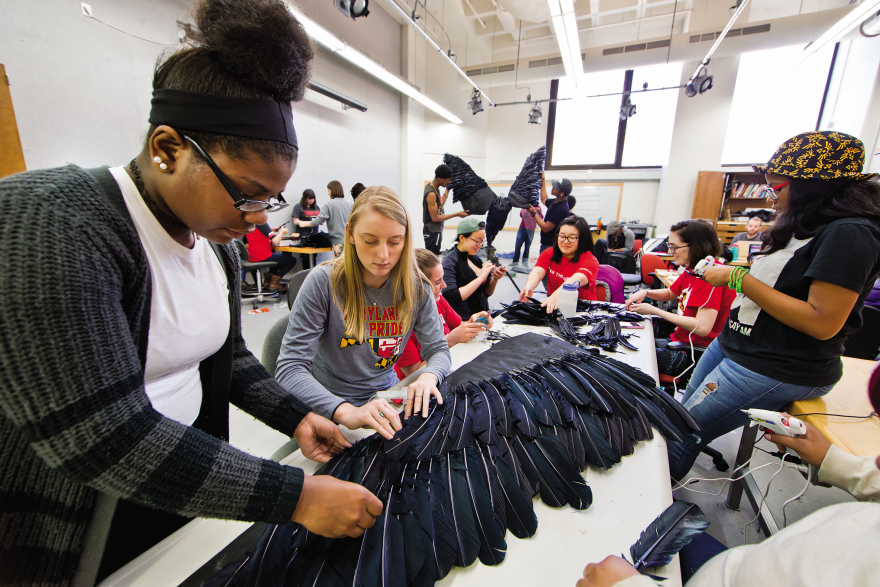 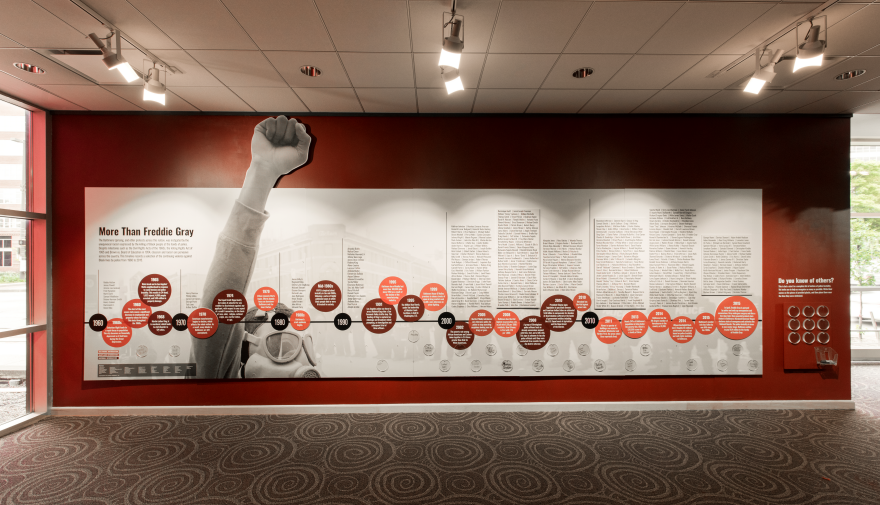 In April 2015 Freddie Gray joined Michael Brown, Eric Garner, Tamir Rice, Eric Harris, Walter Scott and the long list of others African American's who had died or sustained fatal injuries while in police custody. His death sparked anger, protests, and violence in Baltimore. President Obama, the mayor of Baltimore, and others called the protesters "thugs" and strongly denounced the Uprising and the destruction that took place. Local and national media broadly cast blame on the youth. Students at nearby schools, including those at Augusta Fells Savage Institute of Visual Arts (AFSIVA), a public high school, were implicated in the crime and destruction whether they committed it or not. These students lost control of their narrative. This was a blow to a community already plagued by high crime and violence, high unemployment, and low academic achievement.

This project, entitled BMORE Than The Story, brought together students from AFSIVA and University of Maryland College Park (UMD) to co-design an exhibit that would address the youth's opinions about the Uprising and critical issues in their community. The AFSIVA student population is 96 percent African American, 86 percent receive free or reduced lunches, and only approximately 18 percent of the student body will enroll in college. The school is located in a violence-plagued area of Baltimore. The collaboration prompted the high school students to use art and design to tell their side of the story of the Uprising and life in Baltimore. They had seven months to concept, design, and install their exhibit. Our goals for this design for social impact project were:

1. To give the youth a high-profile opportunity to counter the one-sided media portrayal during the Uprising.

2. To empower these students to leverage their art and design skills to address their views, both for this project and beyond.

Addressing such complex and sensitive topics can seem like navigating a minefield. Before diving into these issues that even adults strive to avoid, the students got to know one another. They visited each other's campuses and participated in activities aimed at emphasizing their commonalities and building a sense of community. They then brainstormed about what messages they wanted to convey in the exhibit. From October 2015 through March 2016 they worked to pitch concepts, refine ideas, and edit what content to include. They designed and fabricated components to represent their viewpoints on these issues and engage visitors.

BMORE Than the Story opened at the Reginald F. Lewis Museum of Maryland African American History and Culture in April 2016, one year after FreddieGray's death. The exhibit works included a set of four vultures to mimic the constant surveillance the AFSIVA students feel they are under by police; posters showing quotes from a Baltimore Police Spokesman, the Baltimore Mayor, and media personalities and the students' counters to those sentiments; a participatory wall where visitors could write how they are stereotyped and how they wished to be viewed instead; and a 25-foot-wide timeline listing the names of approximately 1,350 people of color who have died while in police custody from 1960 to April 2016. A set of three information design posters provided contextualizing data to help validate the students' viewpoints. The Lewis Museum, a Smithsonian affiliate, hosted a series of programming events to connect the AFSIVA students' stories to other youth in the community.

We also asked about the project's impact upon them personally. Seventy-eight percent agreed or strongly agreed that through this project they learned to communicate more effectively; 94% agreed or strongly agreed that they gained a better understanding of the way art might address important issues, 100% said they learned to collaborate more effectively, and 89% felt they played a significant role in this project. The students took ownership and were highly engaged in this project with positive results. These survey results indicate that they were high satisfied with the final outcomes. Results from the interviews aligned with the survey data.

During the interviews, students describe the skills and understanding they gained from the project:

"I realized the real meaning of what my arts can do and what the impact it can have on everybody, and how also singing and all these particular acts and everything can change lives and just bring so much more to the table. And it's just amazing." – #7

They also voiced how they were empowered by the project and satisfied with the exhibit messages:

– "There is no stopping us," said one. She would now like to inspire youth with her talents just has she has been inspired by working with the UMD students. Because of the project, "I can accomplish anything that I want." — #25

"I felt like this was the rainbow after the storm. I just wanted to show that just like we can be damaged; we can clean up our damage and fix our mistakes." — #9

The project also helped students imagine how other form of communication might work to disrupt the violence and. #20 said,

Art and design's expressive qualities offered these students an opportunity to speak to the issues in their community. This project focused on having them address those aspects in ways that were authentic to them. The result was a boost to their self-esteem as well as their perceptions of self-efficacy. #11 said,

"I got to express how a whole city could feel. It was cool. It like I was speaking up for everybody, you know, my friends. This felt good. … (Before the project a lot of students, people in school) thought that I didn't have the courage to do something. And now, they're like, 'Hey, he actually did something.' "

"I think overall (the collaboration) was successful. … I think that's really going to get through to people [who] do come and see the exhibit, because I think we really got our point across. Cause like, like we've been through a lot. Like, the history, what happened to April, I think people are going to start realizing that, you know, 'Maybe we should actually stop the violence instead of making it happen.' " #14

"A lot of my teachers were, like, pretty happy that I was a part of it because I got to, like, show that not everybody in Baltimore is a thug or some type of delinquent. … I was just happy to actually get to show that we're different. Not everybody is what they may assume." #22

The students believe these messages, which represent their opinions about Baltimore, policing, racism, and structural violence, will prompt change in how others consider the youth's perspective of the uprising.

Other students talked about the change they felt they were making in Baltimore. #23 said, "Being as though now that they can see how us as youth, I feel, things might change a little. I know it might not change a lot, but it might change at least a little bit."

Even small changes feel like the steps in the right direction. Further, they realize they are not alone in addressing those injustices.

#24 said, "I learned that you can work with other people from different places and y'all can come together and do something that's supporting Baltimore."

Another said, "I … feel that I can talk about how I feel about things, and tell people my story. … I learned that it's other people [of] difference races that actually care about us, and hope the best for us and make sure that we are cool, for real. … After the project, it felt so good to know that there were people out there who cared about us and didn't frown upon us, or anything. I thought everybody just hated us." – #8

Through this project, the students learned that they were not alone in their struggle against structural violence. The students gained an understanding of what other efforts might work to disrupt the violence and inequality in their neighborhood.

The exhibit gave the youth an opportunity to voice their opinions and concerns about their community. This project had a direct impact on how these students view the potential of their creativity, how they have a stronger sense of what they can do with their artistic talents including addressing social issues, and how they became empowered to use art for social justice causes. This project successfully instilled agency, self-esteem, and hope into an underrepresented community using art and design.