Over 99% of the import and export between Asia and Europe are managed in sea containers by ship. Alternatives are air freight, which is relatively expensive and rail freight transport which has the potential to be an environmentally friendly alternative. Particularly interesting is the transport of goods of high value or with temperature sensitivity, which has to reach their goal in under two weeks.

With the technology of autonomous driving the Silk Road Cargo concept restructures intermodal freight transport along the silk road. Starting in Chongqing in China, the road goes through Kazakhstan, Russia, Bularus, Poland and ends in Duisburg, Germany. On the trip the container have to be transferred between trains with different sizes, but also individual or several units may be split off and continue their journey on their own, depending on requirements and guidelines in various countries. Therefore the concept is based on a modular system of wagons, which can be load with sea and high-speed containers.

For more effectiveness two different length of units exist. 80ft units are more efficient on the long journey and 40ft units are more flexibil on short distances. Operative the rail freight will be split in sea container and high speed traffic to fully use the benefits of the high-speed haulage but also allows dynamic arrangements of wagon groups along the way.

For coupling and uncoupling, the individual wagons can drive independently and thus make shunting yards and diesel operating haulage engines superfluous. They are also equipped with batteries, which can supply cooling containers with electricitiy.

In intermodal terminals like in Chongqing and Duisburg the containers get transferred from 80ft to 40ft units to build groups with the same target or get load on vessels for distant locations.

At the target location direct linked distribution centres allow an easy access to load or unload the goods. They connect the areas within a radius of 50 km with the railway network.

By eliminating maneuvering and the flexibility in assembling the wagon groups, rail freight traffic becomes more efficient and can be an alternative to the increasing road freight traffic in Germany or other countries. 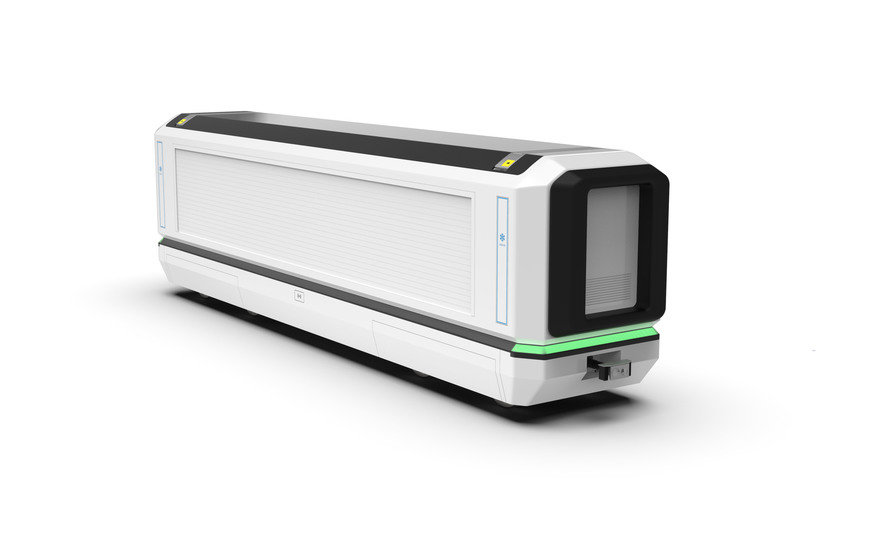 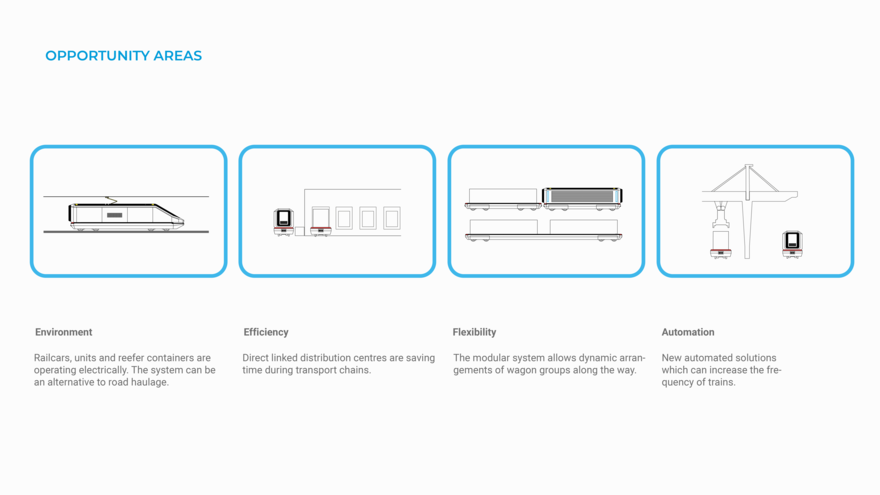 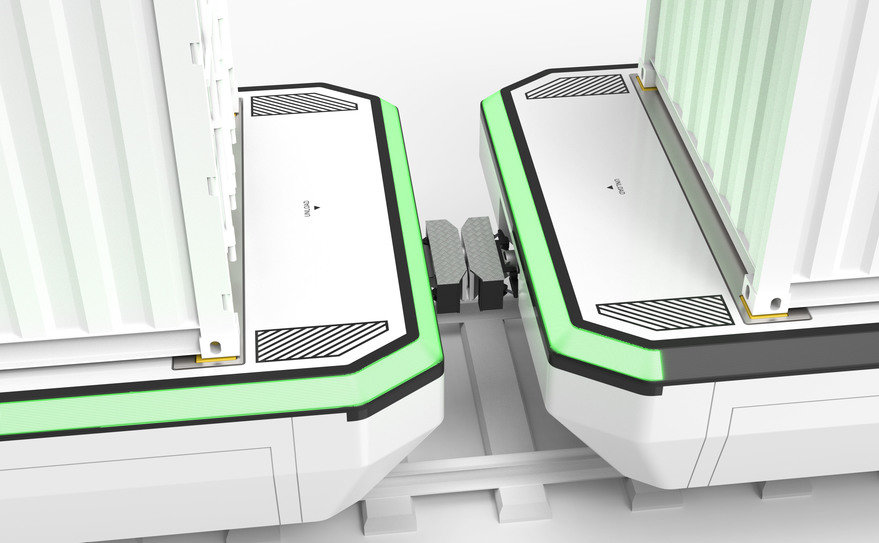 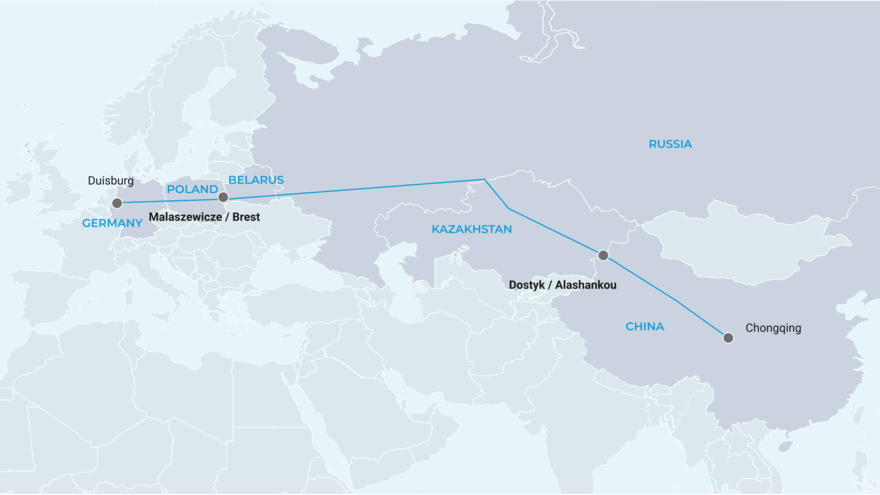 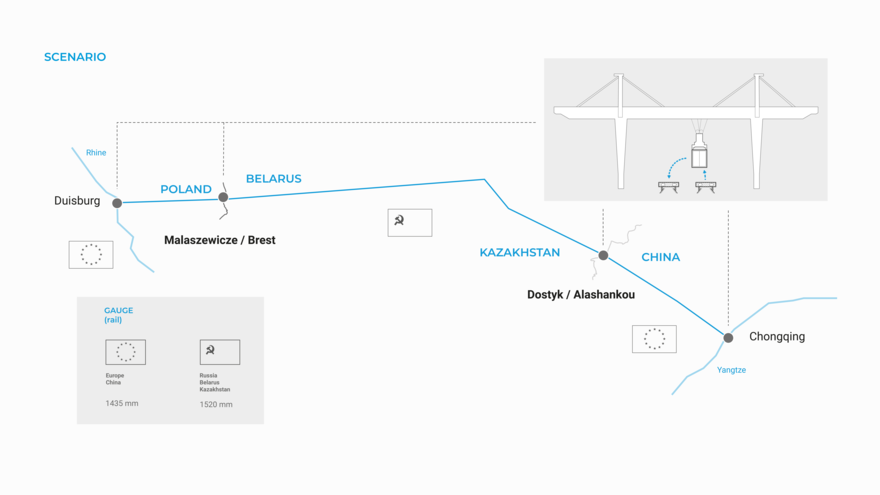 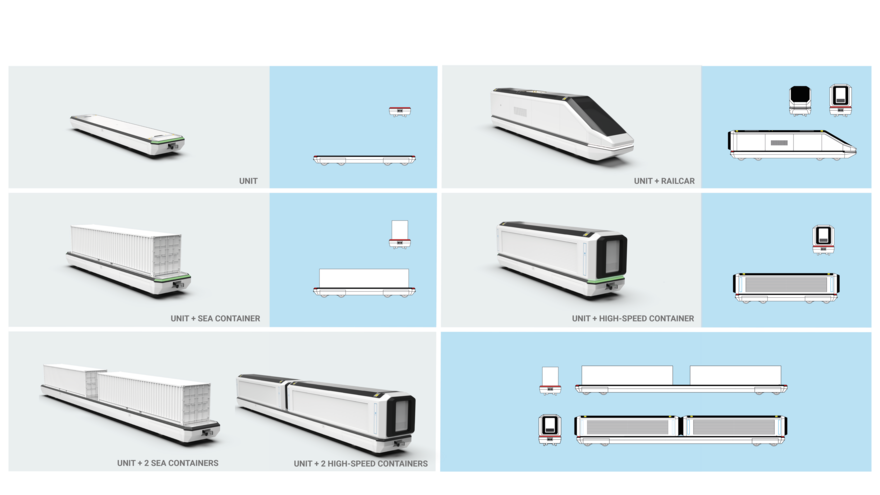 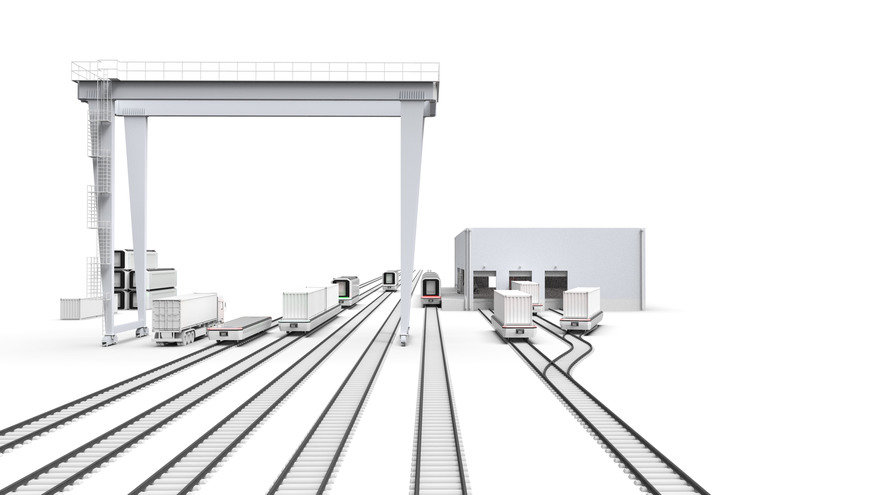 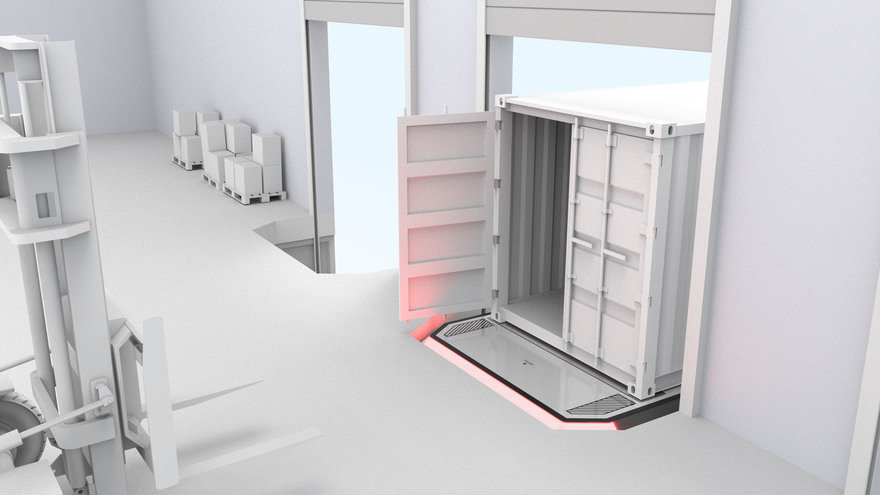 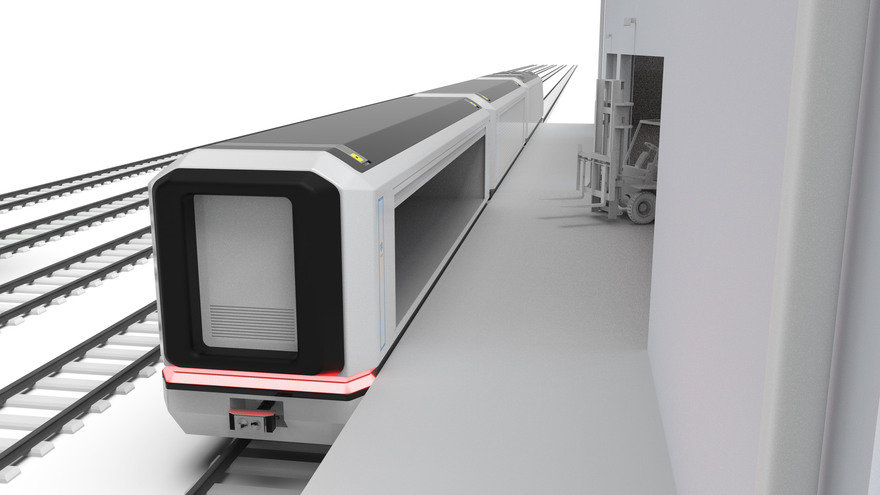 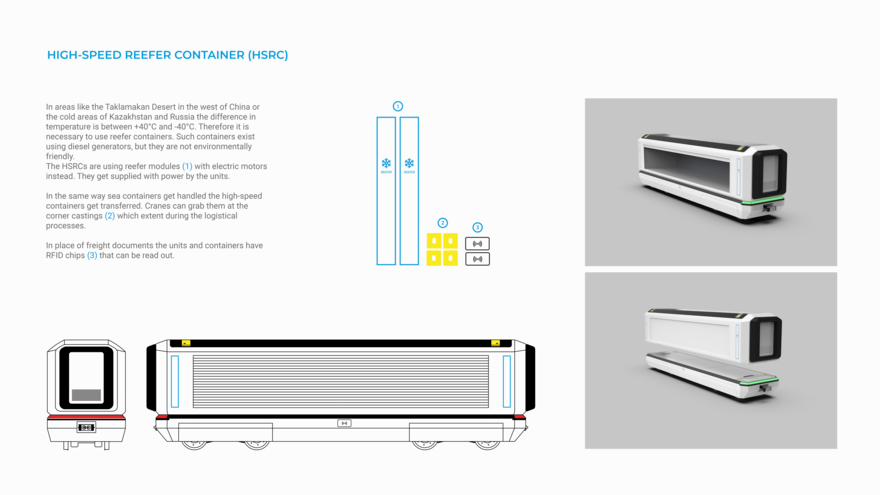 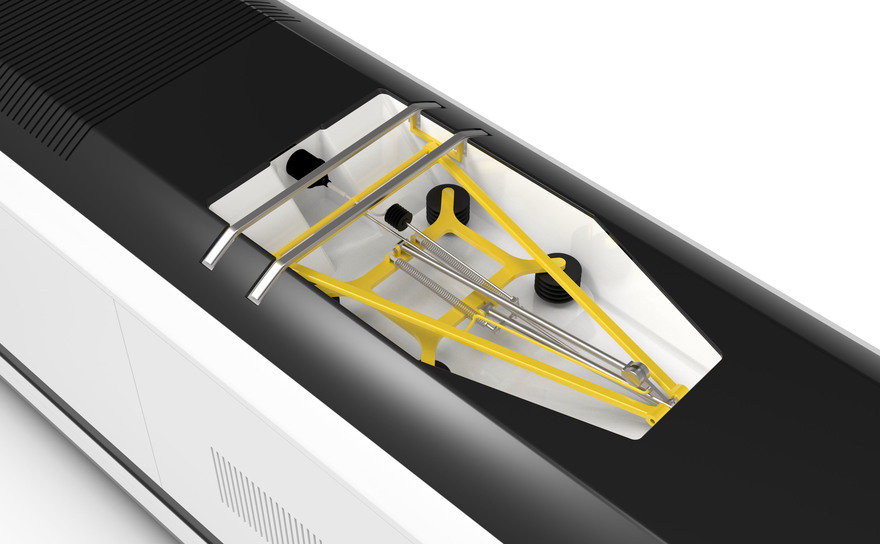 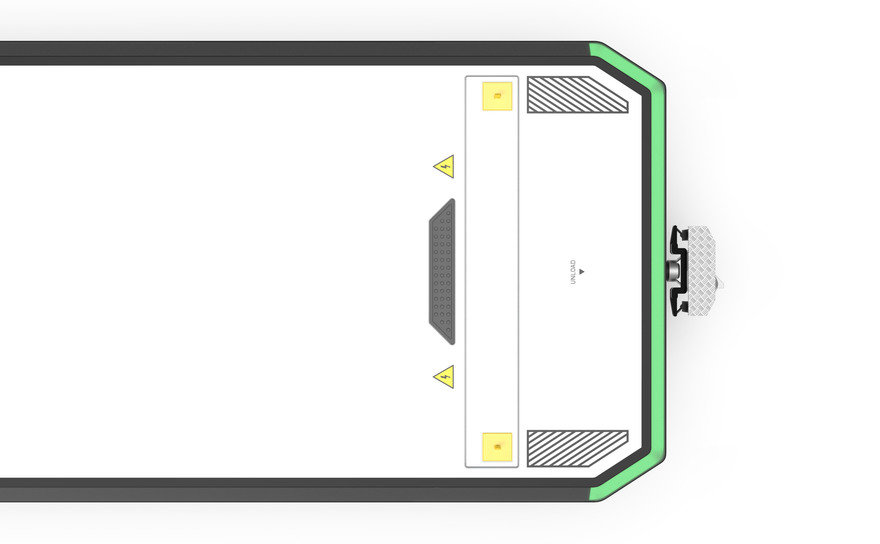 The SR Cargo project is the result from my BA-thesis at the Muthesius University of Arts and Design in Kiel, Germany.

At the beginning I had contact to the journalist Christian Wüst from Spiegel Magazin, who wrote an article about the new silk road in 2018. With the help of his contacts, it was easy to get information and access to intermodal terminals that are normally not open to the public. For this reason I visited DIT (Duisburger Intermodal Terminal) in Duisburg and the DUSS Terminal in Hamburg. It was necessary to get an overview about the transport chains and interests of the different stakeholders.

After empirical studies and some interviews, I had identified three topics which are interessting: The trade surplus between Asia an Europe and the resulting surplus of wagons and empty containers in Europe, the connection between distribution centres and terminals and the idea of autonomous solutions which eliminate maneuvering and assamble wagons.

During the ideation phase I decided to create a system that can use the existing cranes and reach stackers, because all products, packagings and systems are geared towards the size and functions of sea containers.

I determinded to create a system that allows to unload cargo train without handling the containers. In best case the containers should get reload after it again. On the other hand I wanted to design a faster variant of cargo trains to make rail freight more relevant.

In conclusion I designed a modular system that combines high speed haulage and sea container transport. Similarly to the Inter City Express in Germany all wagons have their own electrical motors and can load two different container types (high-speed and sea container). To unload the goods they get an intersection area directly connected to the distribution centre. Sea container get unload at the front and high-speed container sideways.

Furthermore it is also possible to unload containers or goods in remote areas, because the individual wagons aren't bound to the railcars anymore. Therefore also economically weak states along the silk road benefits from the system.