Cycling is one of the healthiest, most environmentally friendly, and affordable forms of transport, but a fundamental barrier to getting more people on bikes is concern about safety. Laserlight Core brings the Beryl patented laser technology, reimagined and re-engineered. The Laserlight Core shines a highly visible laser image of a bicycle 6m ahead of a rider to reduce blind spot collisions and increase cyclist visibility by up to 32%.

The design brief was inspired by customer feedback from our first Kickstarter campaign, which we valued so highly that we decided to launch the second evolution of the product on the platform. As we were doing a campaign for the third time, we wanted to make the most of the opportunity. We solicited feedback on the new product features in real-time, and fed that back into design and manufacturing. We engaged with backers via Kickstarter Live, and we included product testimonials from our "Beta Riders", who were selected to test the product during the campaign and iron out any issues.

Design Director, Daniel Barnes, made some key improvements to the product such as a lighter, sleeker casing (40% lighter than the original), a simpler and more adaptable mount, and the introduction of micro-USB charging. He also added the highly-visible Day Flash feature, ensuring the light increases cyclist safety even during daylight hours.

The Laserlight Core shipped in December 2018, arriving with Backers in time for Christmas. The impact of the product on cyclist safety was confirmed immediately, with testimonials flooding in from around the world.

In a market dominated by exaggerated claims and dazzling bright lights unsuited to our cities, we are proud to have developed something that we feel genuinely makes cycling a little bit safer, and that hopefully encourages more people to get on their bikes. 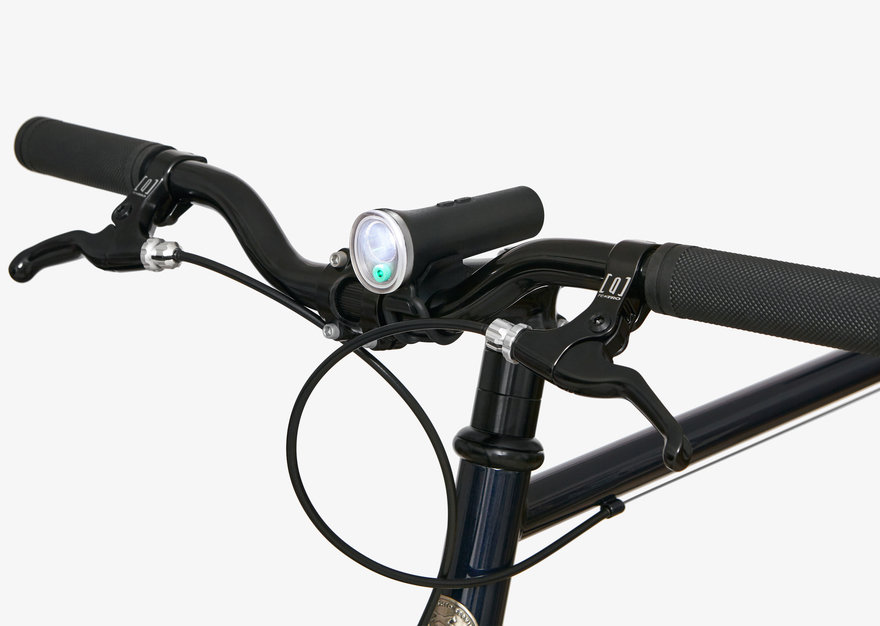 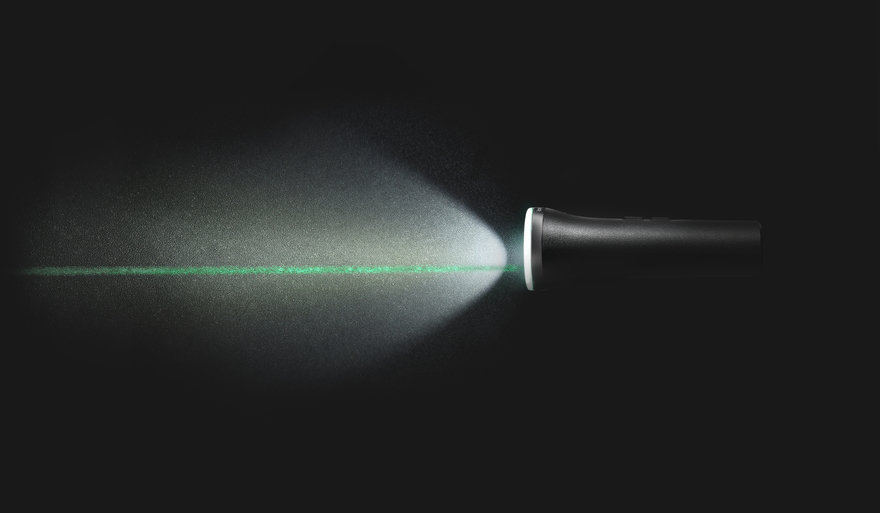 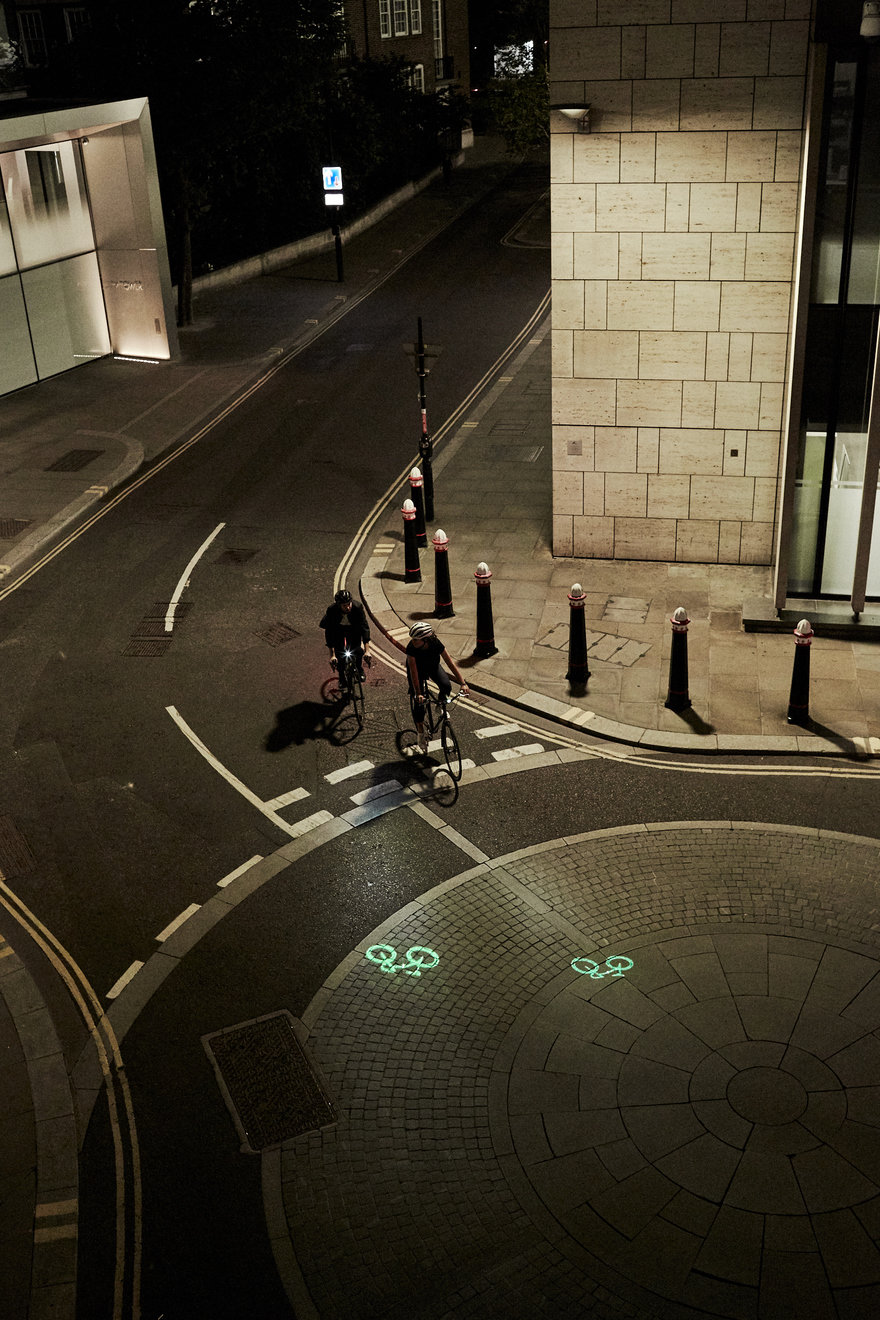 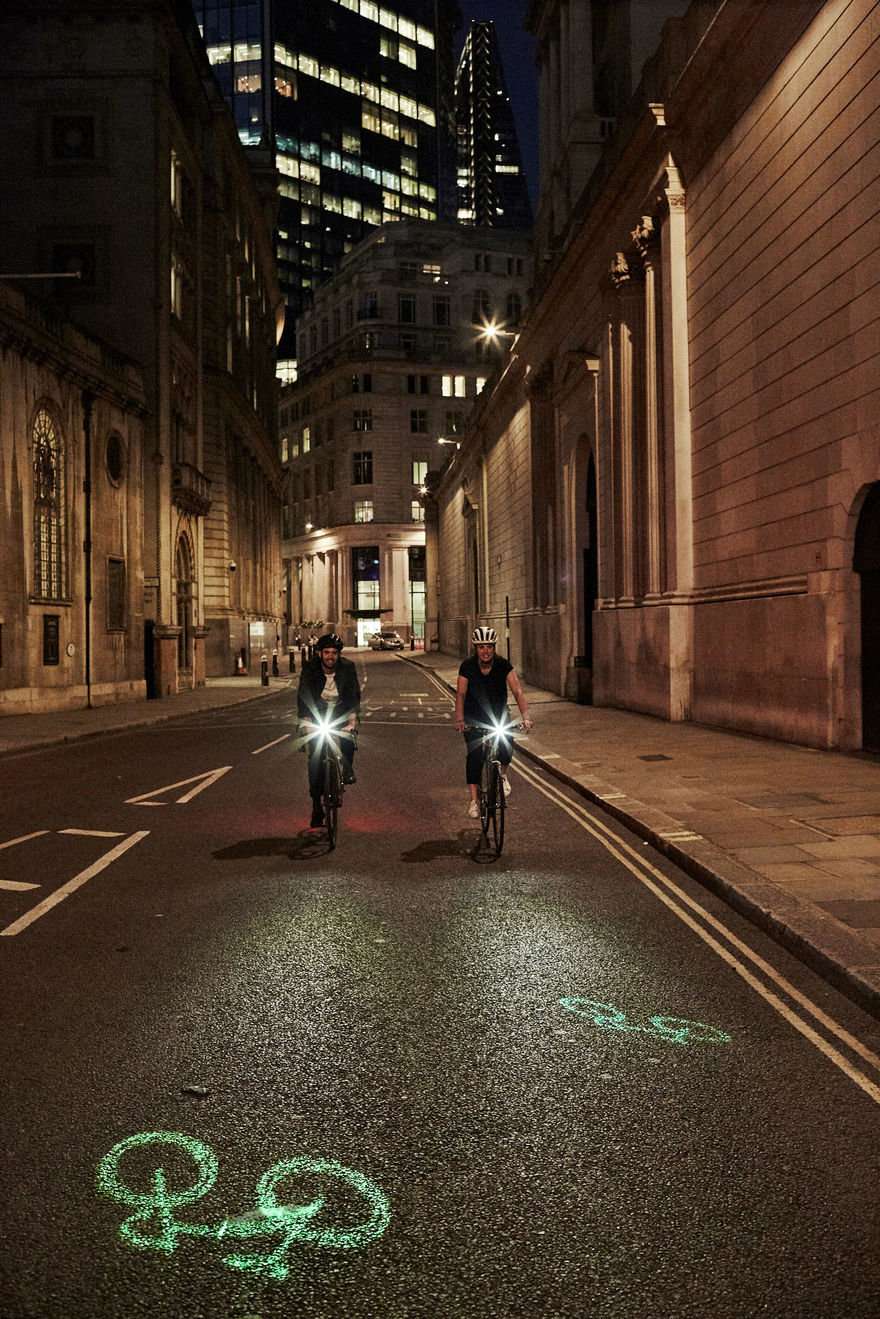 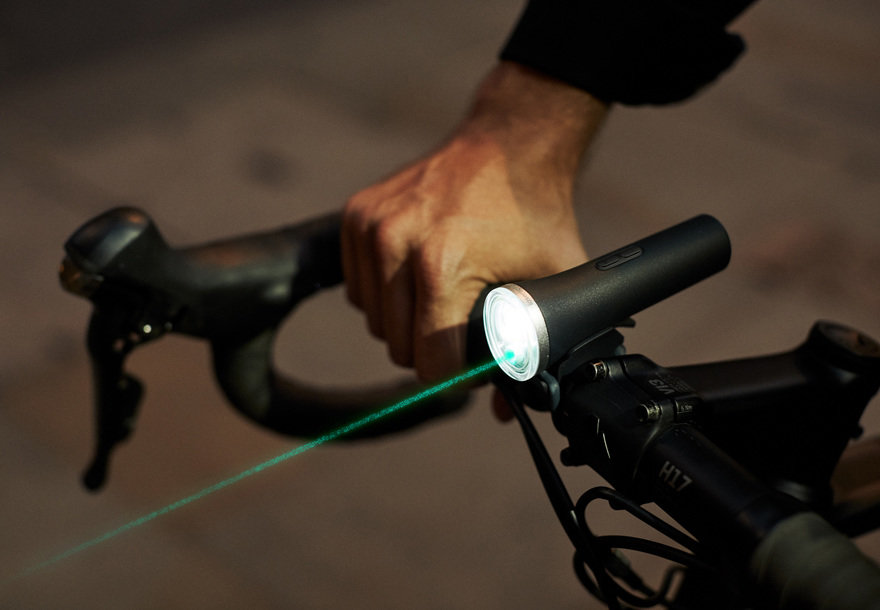 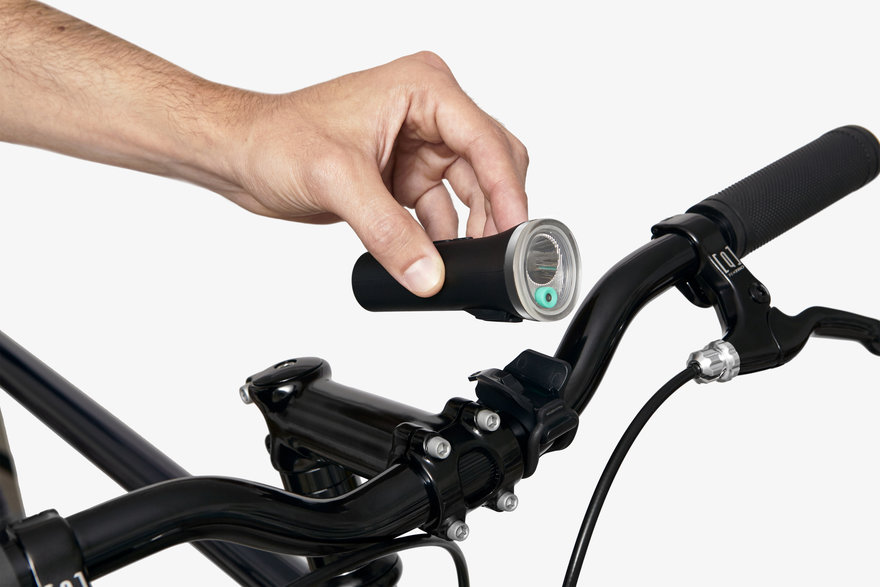 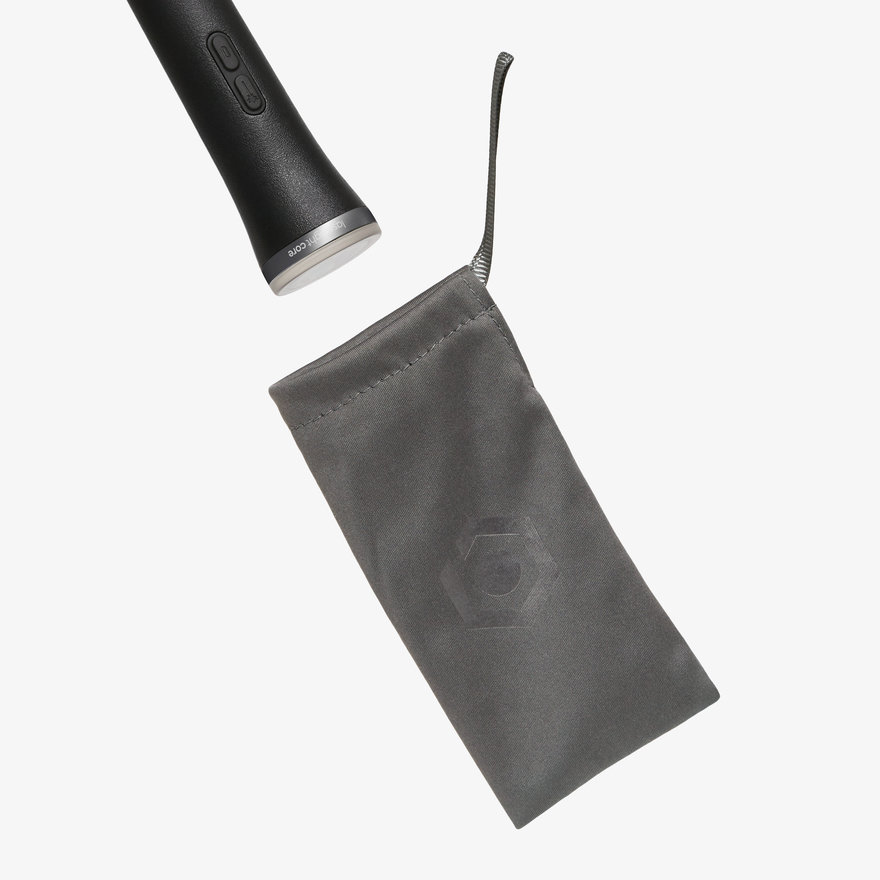 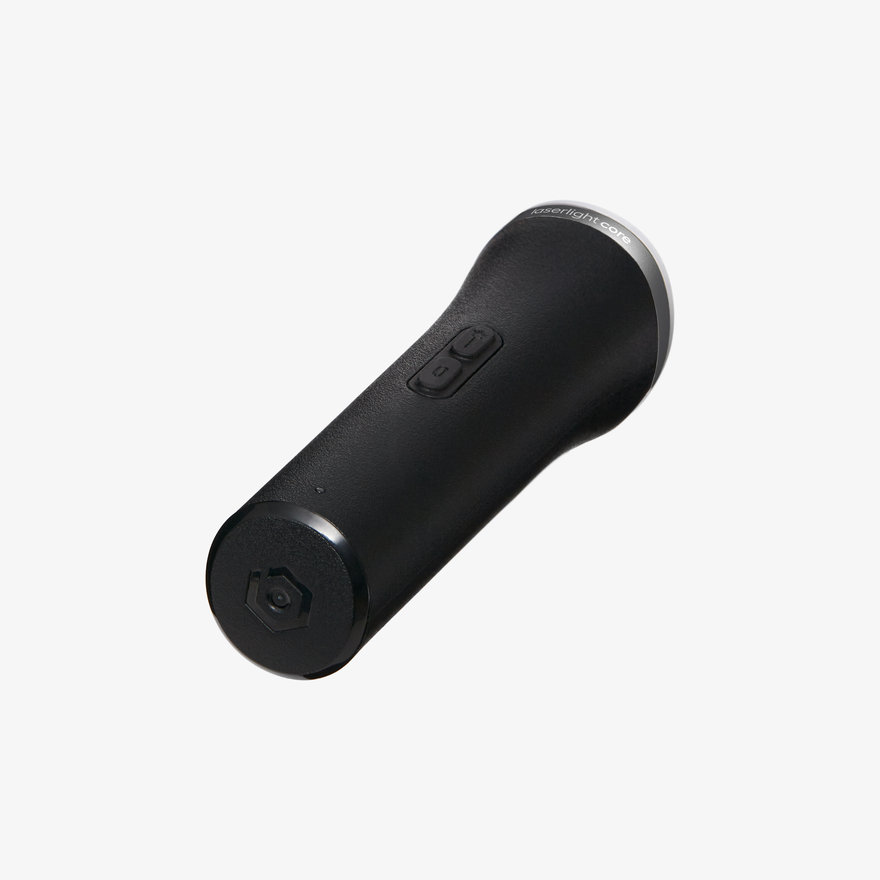 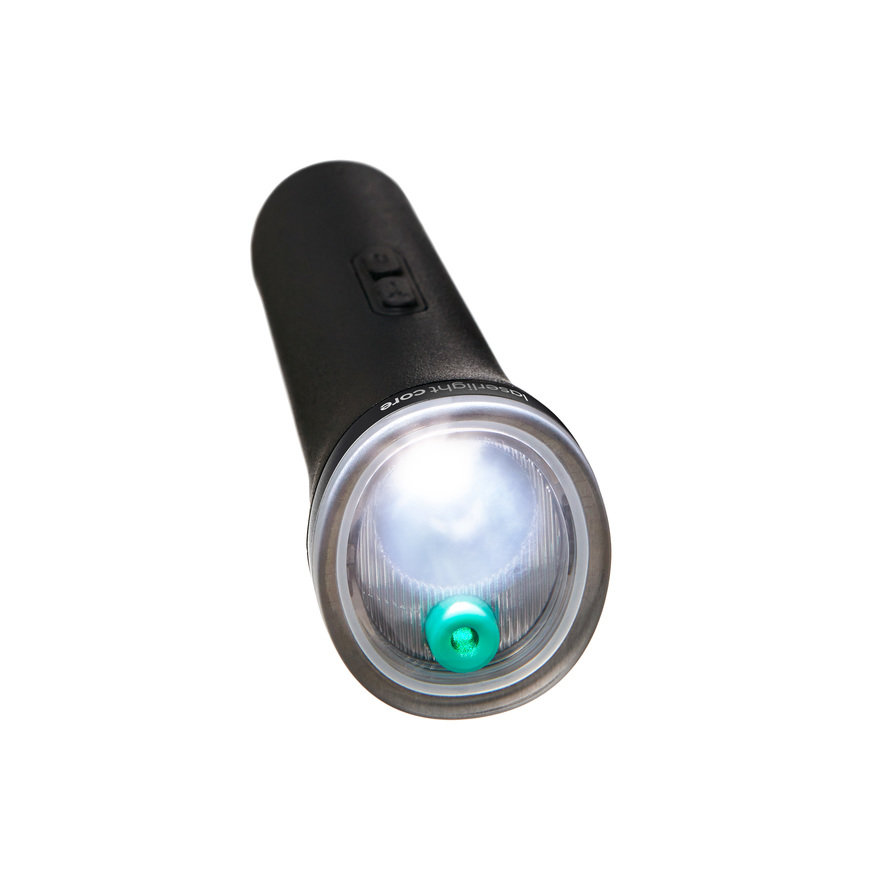 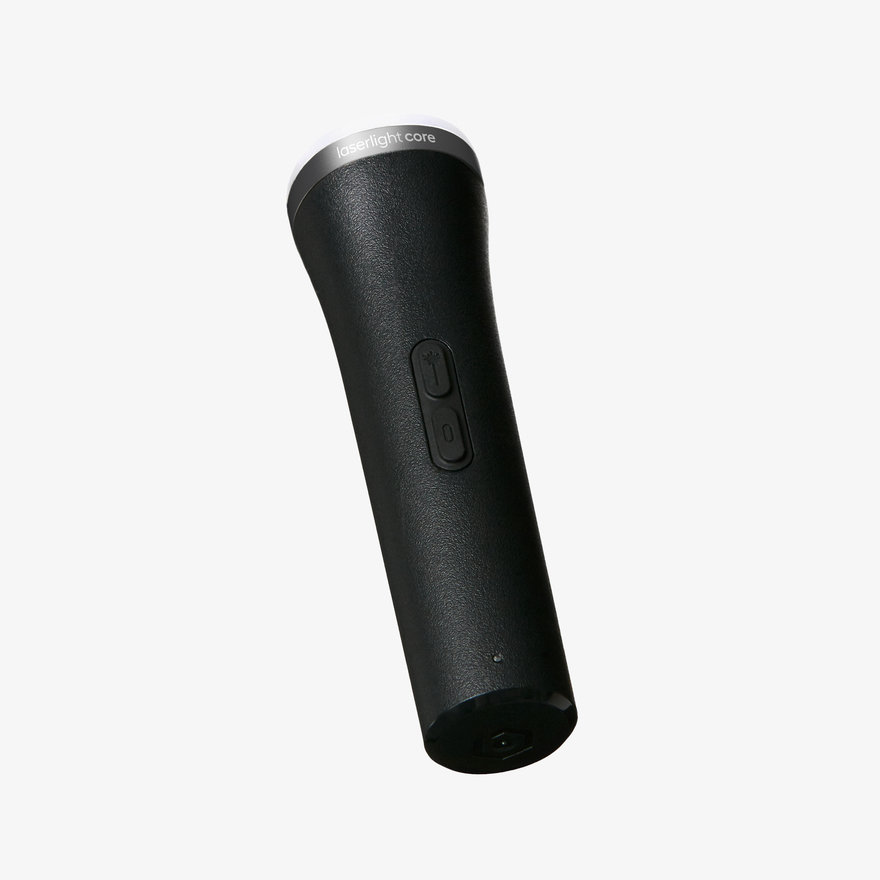 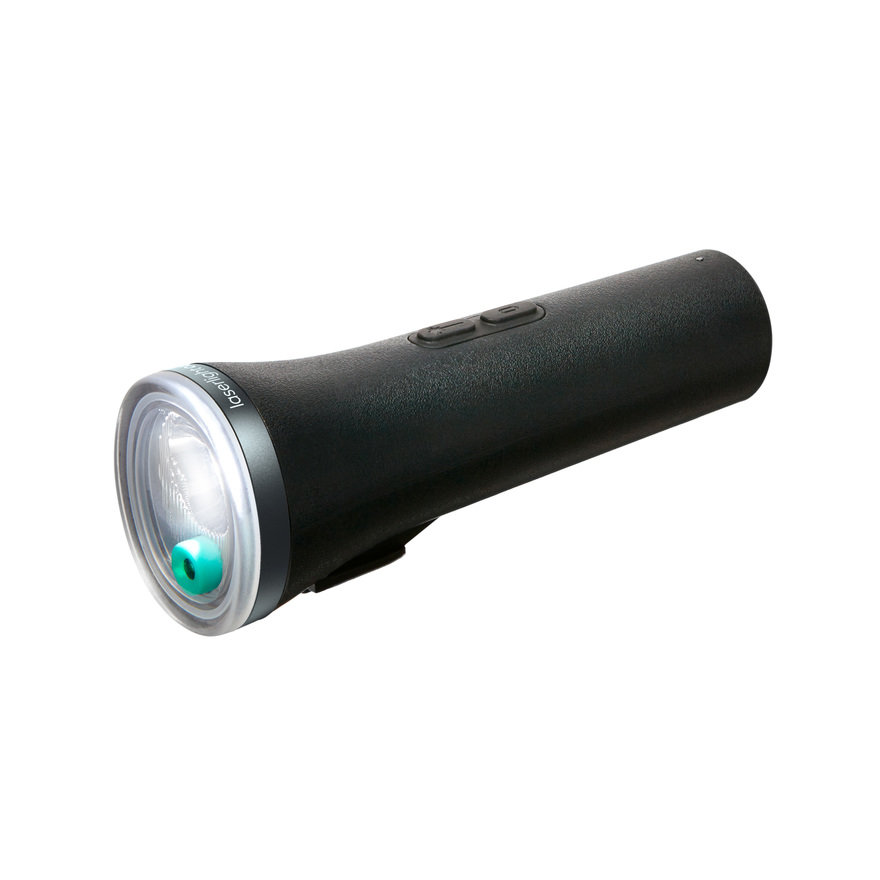 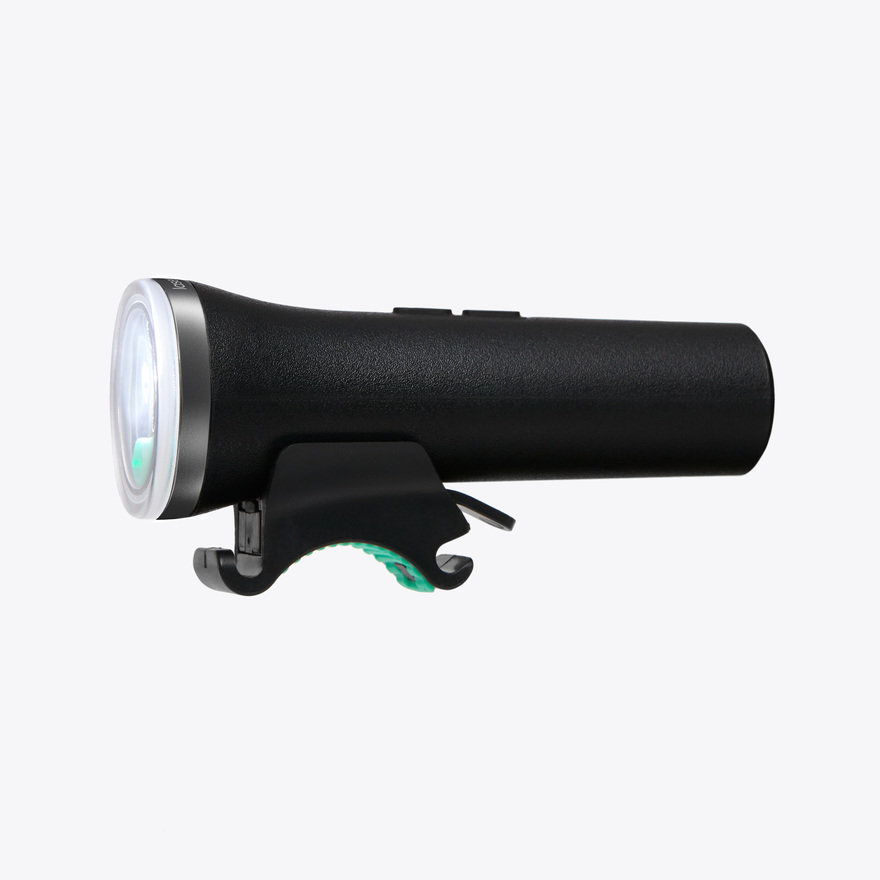 Cycling is one of the healthiest, most environmentally friendly, and affordable forms of transport, but a fundamental barrier to getting more people on bikes is concern about safety. Research into cycling accidents on the road tells you that the majority (nearly 80% in the UK) of cycling crashes happen because a car turns in front of the cyclist.

Emily Brooke identified in 2012 that to be seen in this "blind spot", cyclists really need to increase their footprint on the road, and project an image into the blind spot that can prove so dangerous if ignored. From this insight, the original Blaze Laserlight was born.

Following the success of the concept, Emily brought designer Daniel Barnes on board to reimagine the Laserlight Core as a product for every cyclist.

Daniel began by refining the design brief: first, by committing to lowering the price by almost 50%, and secondly, by envisioning how he and the team could best respond to the customer feedback received over the years.

Some key design areas of improvement which were identified in the brief were:

- a simpler and more adaptable mount, and

In recent years more research had been released demonstrating the power of day flash modes on both front and rear lights, so Dan and the team endeavoured to include a day flash feature and increase the lumen count to do so.

The Laserlight Core introduced a new and simplified design language for Beryl, and coincided with a larger relaunch and rename from our origins as Blaze. The team worked hard to translate DNA from the original products into a new, more refined execution that would appeal to a wider audience. Key to this was softening some of the more masculine details into a softer, sleeker form and modernising the aesthetic to fit with a wider range of bikes and styles.

The design team worked on the product from the inside-out, working with the specific manufacturing processes in mind that would be used by our partner factory in China. A significant part of the overall cost reduction came from simplifying the assembly process. Screws and glue were designed out in favour of clips, and efficiencies were introduced through streamlining the electronics and optical integrations. The result was a reduction in total build time from 80 minutes and 160 operations with the original product down to eight minutes and fewer than 30 assembly steps.

The project utilised a team that simultaneously spanned Asia and Europe, effectively covering a 20 hour working day and ensuring daily drops of both mechanical and electronics progress could be integrated and tested with minimal delay. The team adopted a 'prove it or fix it' approach to testing with every detail checked, tested and refined using rapid prototypes long before tooling was opened for manufacture. Once tooling began, our team visited the factory in Shenzhen to work directly with project engineers on the ground to capture changes and adjustments with minimal time delay.

The project was driven by a desire to reduce cost but increase value to the user: Dan worked to strip out all unnecessary and superfluous elements of the product and focus the design down to the touch points and features that would genuinely benefit the end user in a city environment: good waterproofing; visibility not brightness; easy attachments for quick removal (and to prevent theft); and a simplified user experience. But key to the brand was to exceed expectations and retain a sense of delight. This was carried through in little details like including a carrying pouch to keep the lens clean and scratch-free.

The team used user journey mapping and interviews rather than assumptions to power these changes, and tested features before committing them to launch. In a market dominated by exaggerated claims and dazzling bright lights unsuited to our cities, we are proud to have developed something that we feel genuinely makes cycling a little bit safer, and that hopefully encourages more people to get on their bikes.

Choosing to Crowdfund via Kickstarter

The decision to launch the Laserlight Core on Kickstarter was heavily driven by our experience of Kickstarter as a powerful tool for engaging customers and getting honest, critical feedback. Throughout two previous campaigns, our backers had been highly responsive with both praise and criticism, and their previous comments and suggestions were a crucial component of the new design brief.

By running a Crowdfunding campaign, we were able to involve our existing community of customers. The reaction from them in response to features such as the switch to a standard charger confirmed that our design decisions were in the right direction.

We took advantage of the Kickstarter Live platform several times during the campaign to collect feedback and engage with customers. The live sessions served two purposes. Firstly, Emily was able to connect in real time with backers and followers to answer questions about the design of the light and how the laser projection works.

Secondly, the live sessions let us engage backers with our company and share information about Beryl, such as when we achieved BCorp certification during the campaign. The live nature of the sessions opened up a new channel of communication where we could have honest and open conversations with backers.

In parallel to the Kickstarter campaign, we opened a Beta Riders programme to a small number of riders in our existing community. The Beta Riders were given early samples of the Laserlight Core and Burner Brake to test on their normal rides. This gave us crucial early feedback on how the light was performing in order to make tweaks and changes before the final production run. Based on feedback from riders, we made adjustments to the mount to make it stronger.

We asked Beta Riders to keep track of the different lights modes they were using and the charging interval associated with each. Customer questions indicated that having a long battery life for a light was still highly desired, and testing in real-world conditions helped us to understand how the light would behave under normal use, whether for commuting or leisure rides. The resulting feedback fed directly into the refinement of the firmware for the light.

In order to follow a sustainable path to growth, Beryl decided to pursue BCorp certification and was awarded BCorp status in October 2018. This demonstrates the commitment of the company to examine the human, environmental and economic impact of all the activities generated by the company, including in our manufacturing supply chain.

When choosing manufacturing partners to produce the Laserlight Core and the new light range, members of the Beryl operations team visited their facilities frequently. This means that we have a first hand experience of the conditions in the factory and their practices. In-person visits are ongoing so that we can continue to ensure a high quality product is manufactured without sacrificing working conditions and environmental standards. We also worked closely with our packaging manufacturing partner to make sure all parts of the packaging for the lights is recyclable.

The reward of running a crowdfunding campaign and involving your backers every step of the way is when they finally get the product in their hands and start to send you feedback. As the Laserlight Core is fundamentally a safety device with the potential to avert serious crashes, we were pleased to hear immediately from our new customers, confirming that by getting more of them out on the street, we were having a direct impact on cyclist safety.

A selection of our customers' responses on Twitter and Kickstarter:

Was having a bad cycle home today with three near misses on return from London. Then, when passing two pedestrians, I heard "that is brilliant that, just brilliant." referring to my @weareberyl Laserlight green cycle image. (Original tweet here).

**Biggest unexpected impact**
The attn of peds looking down on their phones in the crosswalk as I arrive at an intersection - usually w/ earbuds and sometimes against the light (Original tweet here).

Got mine today in Kansas, USA! Rode my bike tonight and it was great! I work for a university and sometimes am there very late. Now I feel safe enough to not have to worry about riding home at night. (Original comment on Kickstarter).