How might we use sound to guide a visually impaired parent through the bottle-feeding process and make them more independent in raising their children?

For blind or visually impaired parents preparing a baby bottle is one of the hardest things to do. For preparing these bottles most of these parents rely on the help of others.

OVE helps to pour the right amount of formula and heating the bottle to the perfect temperature and is easy to navigate and use.

For our sound design project at Umea Institute of design, we chose the topic of "Blind parenthood". With this project, we wanted to open the discussion about blind parenthood and raise awareness about the challenges people with visual impairment are facing using products in everyday life. Our starting point has been to create an inclusive design, the design that is needed by some, but good for all.

How does it work?

OVE consists of three modular elements, two side trays, and a smart scale in the middle. For blind or visually impaired people structure is very important, so to provide this, two side trays were designed to store the necessities of the making process always in the same location. The trays are provided with an edge that slightly lifts, so the edges can easily be detected through touch.

The scale element can be set to the age of the baby, this function is supported by braille and high contrast letters. When placing either the bottle or the powder container the scale detects which one is placed. By means of bright light and sound, the user is supported to pour the right amount of powder or water.

Lastly by pressing the heating button, which is provided with a 3D icon, the station heats up the bottle to the perfect temperature. OVE is designed to fit in every kitchen, with modular setup OVE can fit any space in the kitchen or close to the baby bed.

Baby feeding is a magical and emotional moment for parents, and a great time to bond with the baby. OVE is encouraging the parents to be involved in the process of bottle preparation and feeding and gives them the ability to deal with unexpected situations and to be more independent. 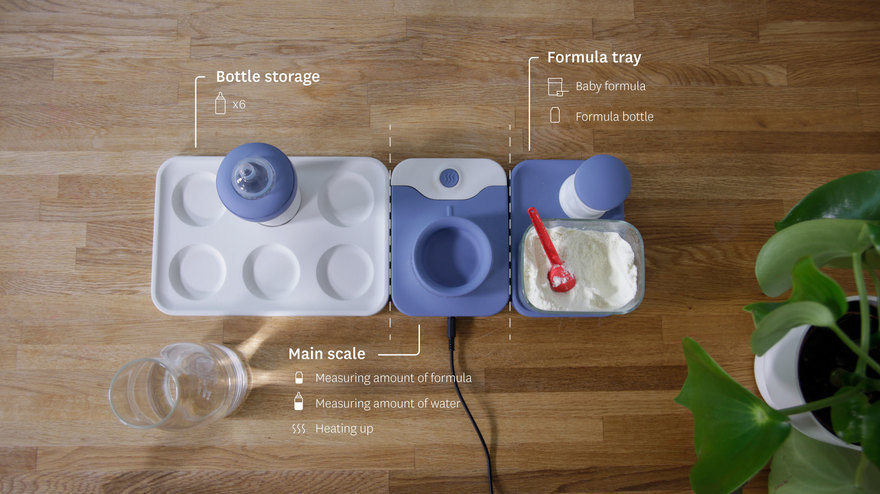 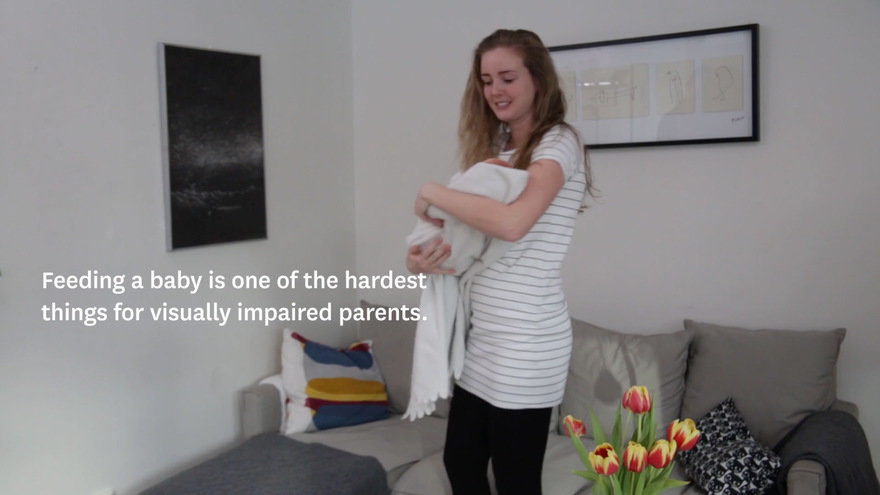 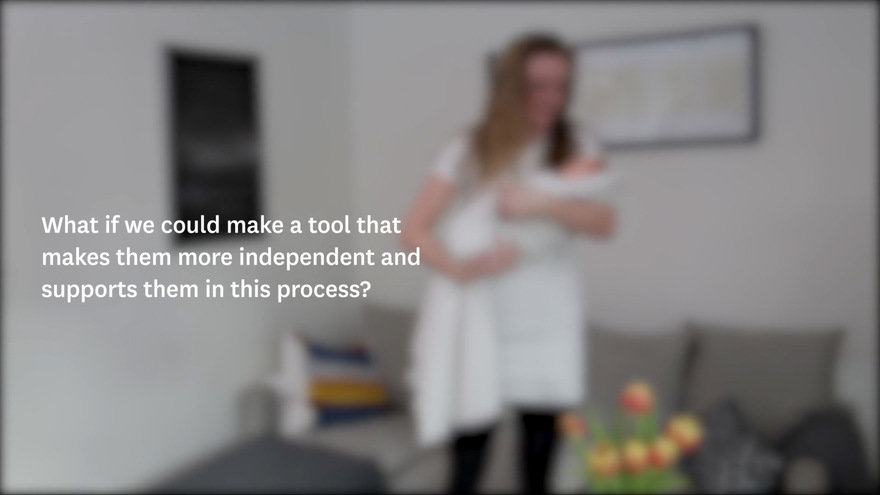 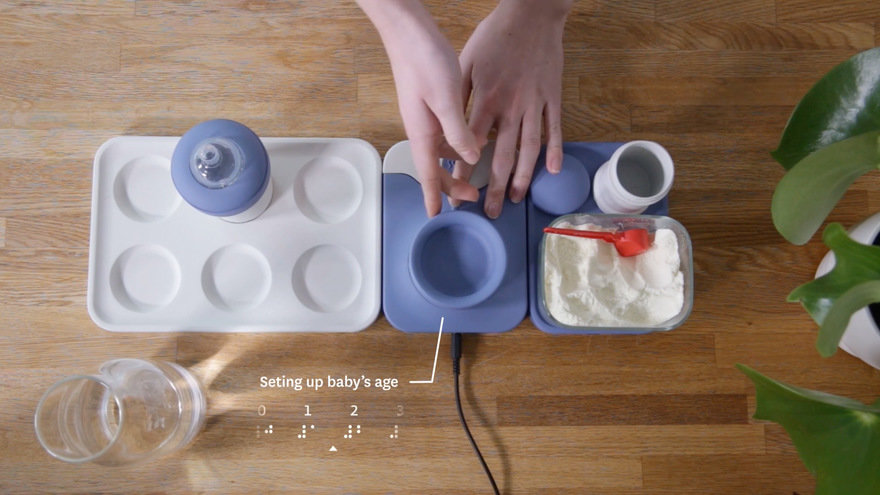 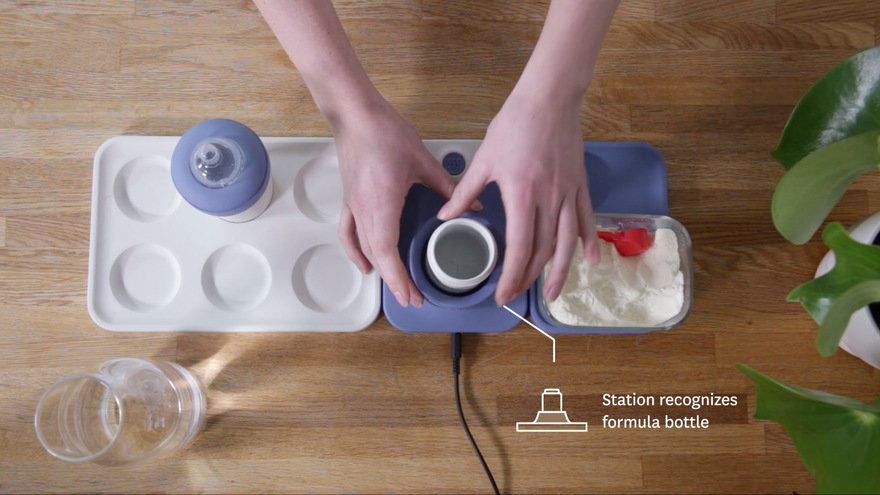 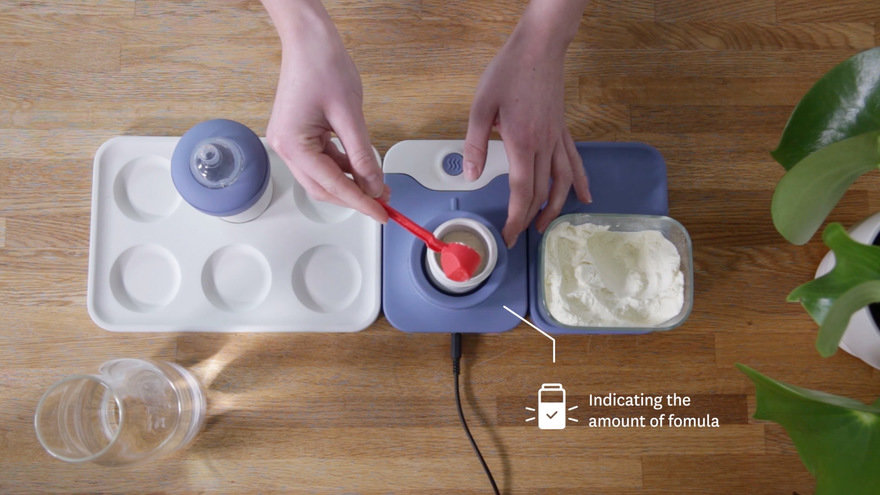 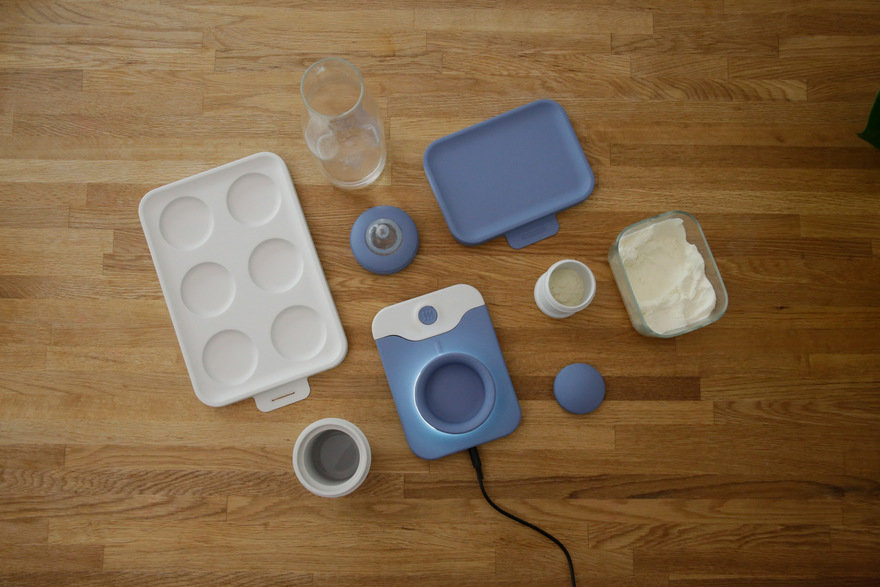 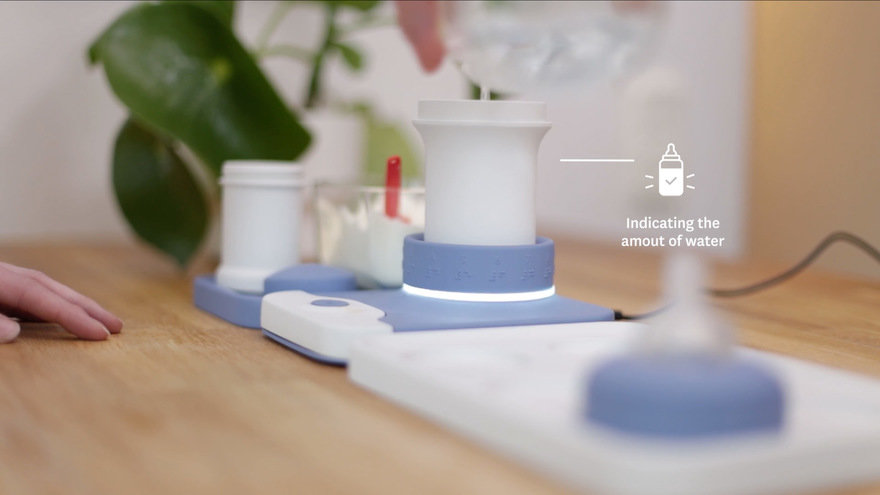 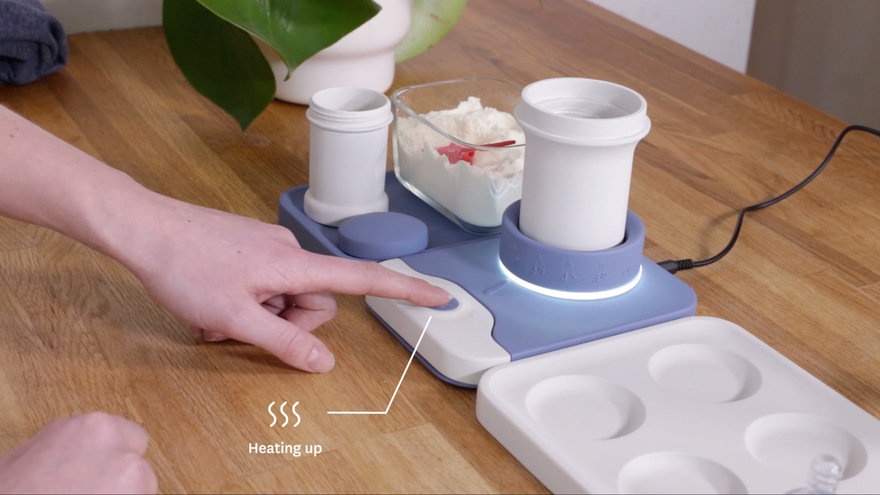 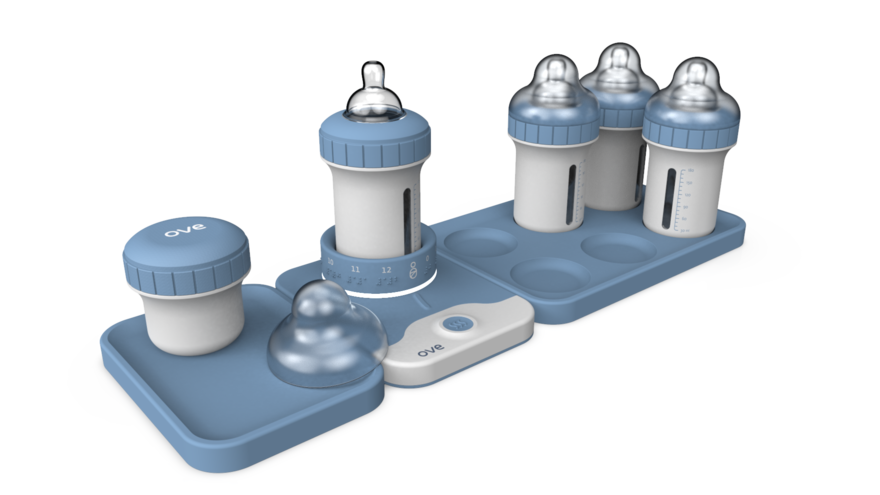 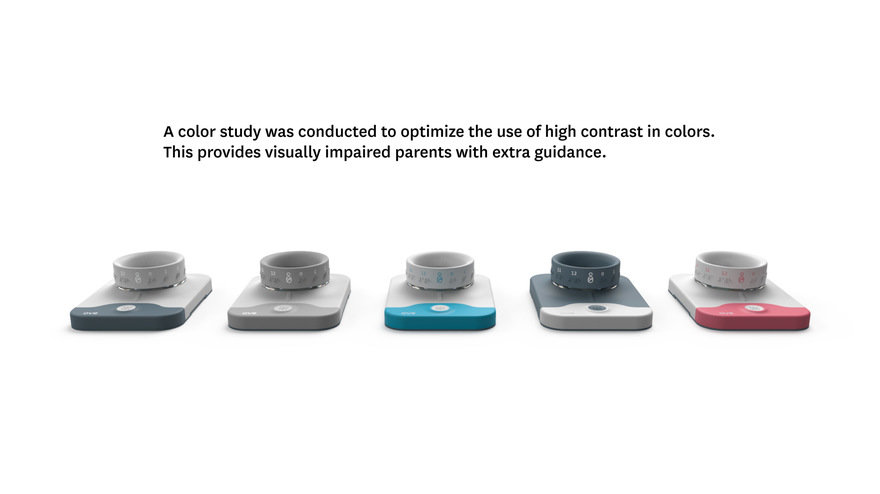 OVE is the result of the sound design course at Umeå Institute of Design. In this course students from both first year Interaction design (IxD) and Advanced Product Design (APD) create mixed groups based on topic interest. In a period of two weeks a complete concept is created.

Worldwide 253.000.000 people have a visual impairment and 36.000.000 are blind. The goal of this project has been to tackle the challenges of people with visual impairment through sound. The specific topic of blind parenthood has been chosen because this is a small niche market that is often ignored.

Several blogs on blind parenthood can be found online. One of the things that jumped out as being a hard task is making the baby bottle in one of these blogs. There are also instruction videos that create workarounds for bottle feeding while visually impaired, however none of these provide a decent solution.

How might we use sound to guide a visually impaired parent through the bottle feeding process whilst make them more independent in raising their children?

We tried out the to make a formula bottle ourselves while being blindfolded to have a better understanding of the problem. The findings were mapped out and the design opportunities were identified.

The main challenge for visually impaired parents is to maintain a hygienic working area. Visually impaired people often rely on touch. However, when touching the baby powder, the water or the bottles repeatedly, the risk of contaminating the baby food with harmful germs increases.

Making a baby bottle requires several objects and involves many small tasks. For the visually impaired, each of these steps requires extra effort. Visually impaired parents need to have a clear system of where to store items, and clearly communicate it with their partners.

Making the baby bottle involves precise measuring of water and milk powder. The amounts needed are often communicated by the packaging which is unreadable for the blind or visually impaired user. Pouring the right amounts is almost an impossible task when not provided with tools for visually impairment.

Several lo-fi iterations were prototyped to test both the sound and all other modes of interaction.

A cardboard model served to set dimensions and to test haptic feedback of the age-ring. This model lead to the decision of making a modular design, in order to adapt to every kitchen.

The next iteration was a laser cut model, which gave us a better understanding of the dimensions, ergonomics and was used in wizard of oz user testing.

We wanted the sound to be round and soft. We started off by listening to different sounds in the environment and seeing what we liked about them. The sound should be trustworthy and easy to understand. We tried to use recorded sounds and adjusted sounds from other sources however, in order to have a consistent language of sound, we needed to have a consistent timbre.

We created the timbre that we wanted by rebuilding an existing synthesizer in Massive by adjusting the envelope, pitch and by combining different notes in one sound effect (e.g. the confirmation sound). The pitch and pace are designed to gradually increase during the process of pouring to communicate the function clearly.

The Wizard of Oz user testing focussed on the main station and the bottle. The aim of our testing was to see how well the sound guided the user through the confirmation and dosage indicators. Most of our users didn't have previous experience in baby bottle preparation. We guided the users through the steps of bottle feeding and focussed mainly on their feedback on sound.

Most people in our user tests noticed that the sound for confirmation was the same, which was appreciated. Creating unity in the sound language makes it easier to understand. Based on this user-tests, we improved the timing of the sound when pouring the water.

Finally, a hi-fi working prototype was created. For the design process it was important that the product is desirable for both visually impaired users, but also for other users. Arguably, the product is usable for people with hearing impairments.

A colour study was conducted to optimize the use of high contrast in colours. This provides visually impaired parents with extra guidance.

This project was conducted in two weeks with a team of four designers. Some of the challenges we faced during the process was to get in contact with our specific persona. We got in contact with Croatian and Dutch blind organisations, who helped us get in touch with visually impaired parents.

Our idea was to build a product that guides visually impaired parents in the full process of making a baby bottle, using sound and light as way of communication. However, the challenges are not just in bottle preparation. Making sure that the station surface is clean and sterilized and that everything is in its place is something that we also considered in our design process.

Advantages of the final design

OVE has tactile feedback on the age setting ring and age indicators in braille. It is easy to locate the different parts of the station by the 3D embossed logos and slightly lifted tray edges.

Sounds have been implemented to indicate the steps of the process and for gradually guiding the pouring process.

As a baby grows, the ratio and amount of powder required changes. With OVE, the user does not have to worry about this. When setting the ring to the right age, the amount of powder and water is automatically adjusted. OVE is provided with a heating function, to heat the water to exactly 40 degrees Celsius, making usage of a microwave unnecessary.

The system is fully modular, enabling different configurations and offering the possibility to remove the side trays.

For both the baby bottle and the station, a minimal amount of parts has been used to provide easy disassembling, cleaning and reassembling. The side trays have upstanding edges so that any spills are kept inside the tray.

The design guides every step in the process of making a bottle, from storing the necessities always in the same location, to heating up the bottle to the perfect temperature.

The main goal of the project was to have an 'inclusive' design, a design that is needed by some yet good for all. The starting point was to make a design that both looks and feels good. Several colours are available, as both visually and sighted people desire and deserve products that look good in their home.